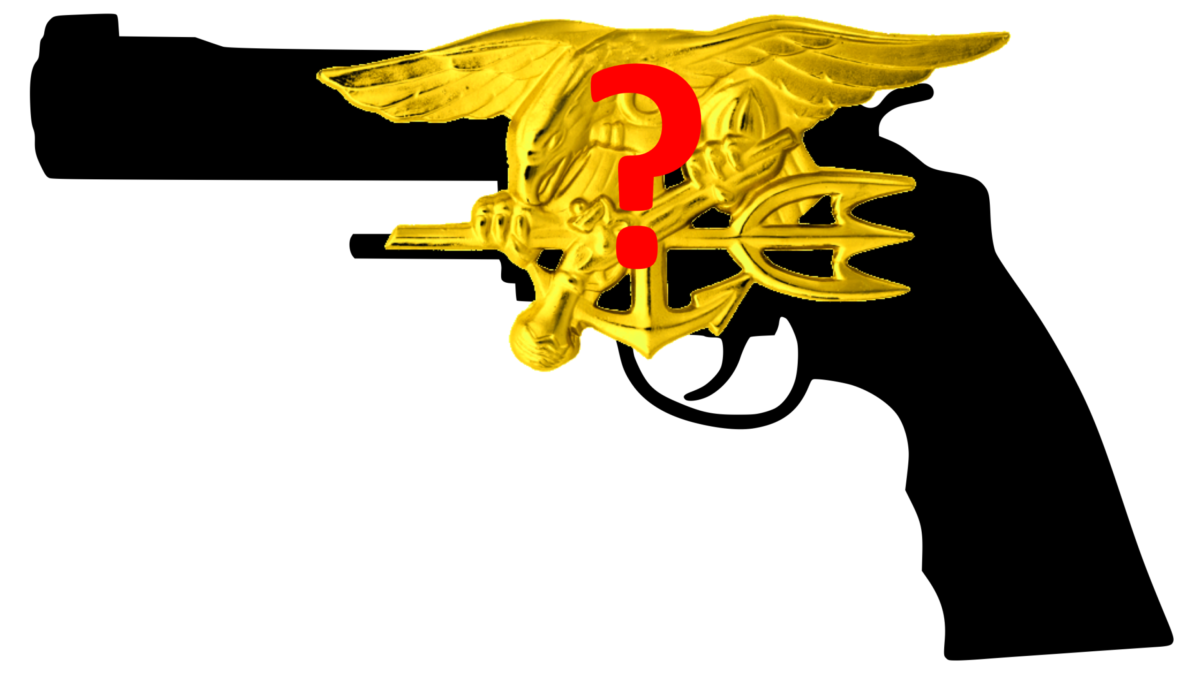 In a surprising announcement today, U.S. Navy officials have confirmed the elite U.S. Navy SEALs will transition to a revolver as their primary handgun.

LCDR Rusty Bottoms of the Naval Surface Warfare Center, Crane, told reporters from Al Jazeera and RT News that “selected elements of the naval community” will move to the new weapon over the next year, as they come into inventory. While not referring directly to the service’s elite commandos by name, it’s understood he was referring to the SEALs, because nobody else in the Navy knows how to shoot a handgun.

The guns will most likely go to the Navy’s top secret, Super Cool Attack Team Viper, formed in early 2012 when it became clear that the formerly-covert SEAL Team Six (officially titled the U.S. Naval Special Warfare Development Group, or “DEVGRU” in Navy-speak) could no longer be denied by the Navy in the wake of dozens of former operators rushing forward with details about the would-be clandestine team. An anonymous U.S. Special Operations Command (SOCOM) official told RevolverGuy that, “it’s hard to keep something like DEVGRU quiet with all these guys publishing books, and lining up to make appearances on CNN, The View, Oprah, and Ellen, claiming they were the guy who really shot Bin Laden.”

Super Cool Attack Team Viper (reportedly called  “NOTDEVGRU” inside SOCOM) will likely receive the weapons late this month, and exercise them in workups for summer deployments to Boca Raton and Hollywood. The Pentagon will neither confirm nor deny that legendary SEAL Dick Marcinko has been recalled to active duty to teach the young SEAL pups how to grow a real beard and shoot a roundgun, but The Truth About Guns recently reported that revolver-legend Jerry Miculek was seen teaching a private class of men wearing flippers, and there are reports that Chris Costa has been seen practicing Captain Kirk rolls, and dancing around the range like a cat on a hot tin roof with a battered Ruger GP100.

Speculation abounds about the make and model of handgun selected by the SEALs. Senior Chief (Ret) Thor Neptune—a former SEAL, and CEO of Trident Who Killed Bin Laden Tactics (www.itwasmetoo.com)—confirms that some vintage S&W Model 66 revolvers remain in the SEAL inventory, but the team is unlikely to go with the newest version, “because the lock sucks” and officials are worried the SEALs will lose the keys in the surf. Pentagon insiders hint at a special version of the Taurus Judge with a corrosion-proof finish and “a nice little anchor” on the side, but the going opinion of 69th  Chairborne Ranger Regiment veterans on AR15.com is that Colt’s will build a limited run of Pythons, chambered in .357 Sig. The guns will supposedly be assembled from a hidden cache of surplus parts, which are reportedly buried deep in the bowels of the Hartford plant, next to the cryogenically-preserved bodies of Samuel Colt, John Browning, and Curtis LeMay (O-P-E,  P-O-E . . .).

The reaction from the online firearms community to the news has been energetic. YouTube sensation Hickok45 has seen a 38 percent rise in traffic on his revolver videos, and competitor Nutnfancy has just released a 1 hour, 47 minute video titled, “Riptide Revolver.” A Facebook post showing a MOLLE’d operator—with a shemagh, a Jeff Quinn beard, and a matched pair of Single Action Armies—boarding a Humvee in Afghanistan has gone viral, and the GlockTalk server melted down within minutes of the announcement.

Reaction from manufacturers has also been strong.

Industry giant Sig Sauer—who builds the P226 pistol currently in use by the SEALs, and was considered a leading favorite to supply the next generation of guns—has denied that internet reports of inertial discharges with dropped P320s spurred the Navy to go with another design. A Sig Sauer representative has said, “our extensive testing has shown there is no significant risk of discharge when a P320 is dropped underwater onto the sandy ocean floor.”

A Freedom Group executive expressed shock and disappointment that their R51-based prototype, with its unique hesitation-fire system, didn’t fare better in the testing. “It came with a waterproof Pelican case and everything,” he said. Pentagon insiders told RevolverGuy, off the record, that the radical design suffered from repeated squib loads, “and a few squid loads.”

Glock immediately filed a protest, by reflex, even though they weren’t in the competition.

Ruger executives seemed unfazed by the announcement, and remained focused on selling their next million guns.

(CNN contributed to this report)