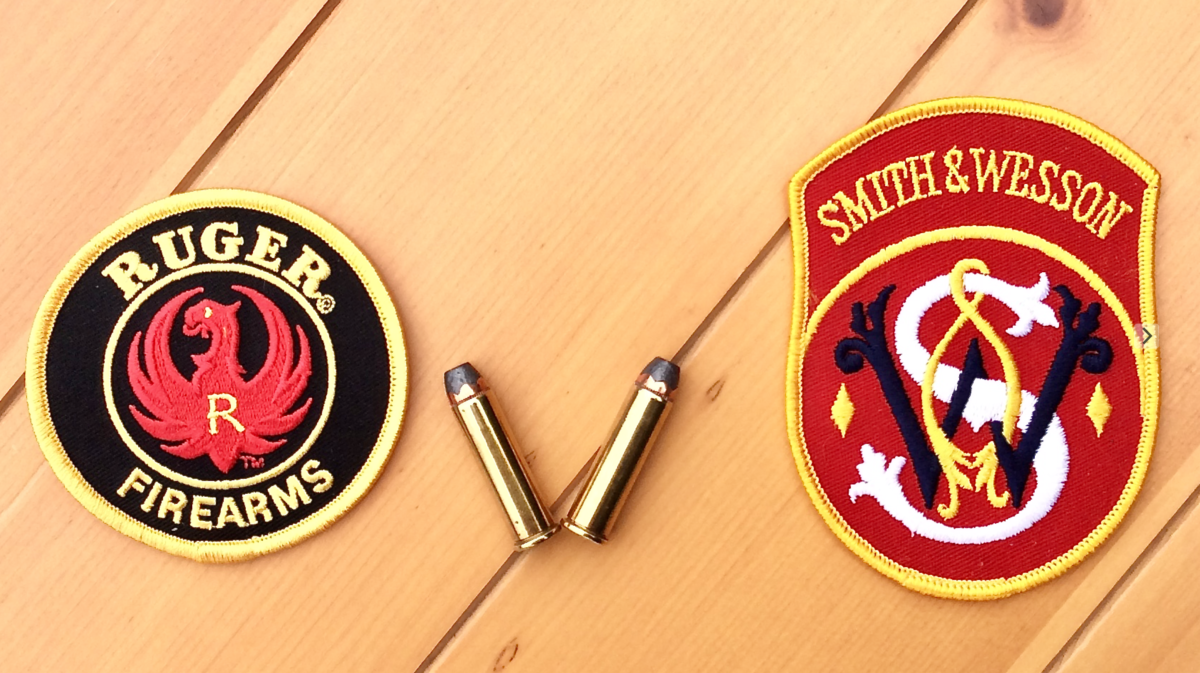 Back in the days before drastic, fantastic, plastic pistols ruled the day, companies like Sturm, Ruger and Smith & Wesson were locked in a battle to decide who would be crowned the King of the double action revolver market. The distinction was important, as the double action revolver represented the largest segment of the commercial and law enforcement handgun markets.

At times, the battle got heated and marketing feathers got ruffled, much to the amusement of the gun buying community. In fact, there has probably never been a more entertaining marketing showdown than “The Great Frame War” of the early 1980s, which pitted a well-established Smith & Wesson against Sturm, Ruger, the new kid on the block. This is the tale of that Battle Royale.

While the climax came in the mid-1980s, the story begins in 1955. That was the year that Smith & Wesson released what was to become one of the company’s most successful designs ever, the Combat Magnum. The Combat Magnum was the result of a conversation between legendary lawman and gunwriter Bill Jordan, and Carl Hellstrom, the President of Smith & Wesson. In 1954, Hellstrom had asked Jordan for his thoughts on what the ideal law enforcement gun would look like, and Jordan didn’t hesitate to describe it in detail.

Jordan’s ideal gun would be a .357 Magnum, built on Smith & Wesson’s .38 Special, middleweight, K frame. It would have a heavy profile, four inch barrel with an integral ejector rod housing, and a cylinder with recessed chambers. The gun would be topped with a ramp front sight and an adjustable rear, to take advantage of the wide range of bullet weights and velocities in the .38 Special and .357 Magnum calibers. A lawman could select the load he wanted to carry, and easily regulate the sights for it–something that was not only more difficult, but also very permanent, on fixed sight guns.

At the time, Jordan had thought they were just “talking idly,” but Hellstrom was busy taking mental notes and a year or so later, he delivered the first production sample to Jordan, catching him by complete surprise. The delighted Border Patrolman and acclaimed exhibition shooter took it to a scheduled TV appearance, and introduced it to America as “the answer to a peace officer’s dream.” 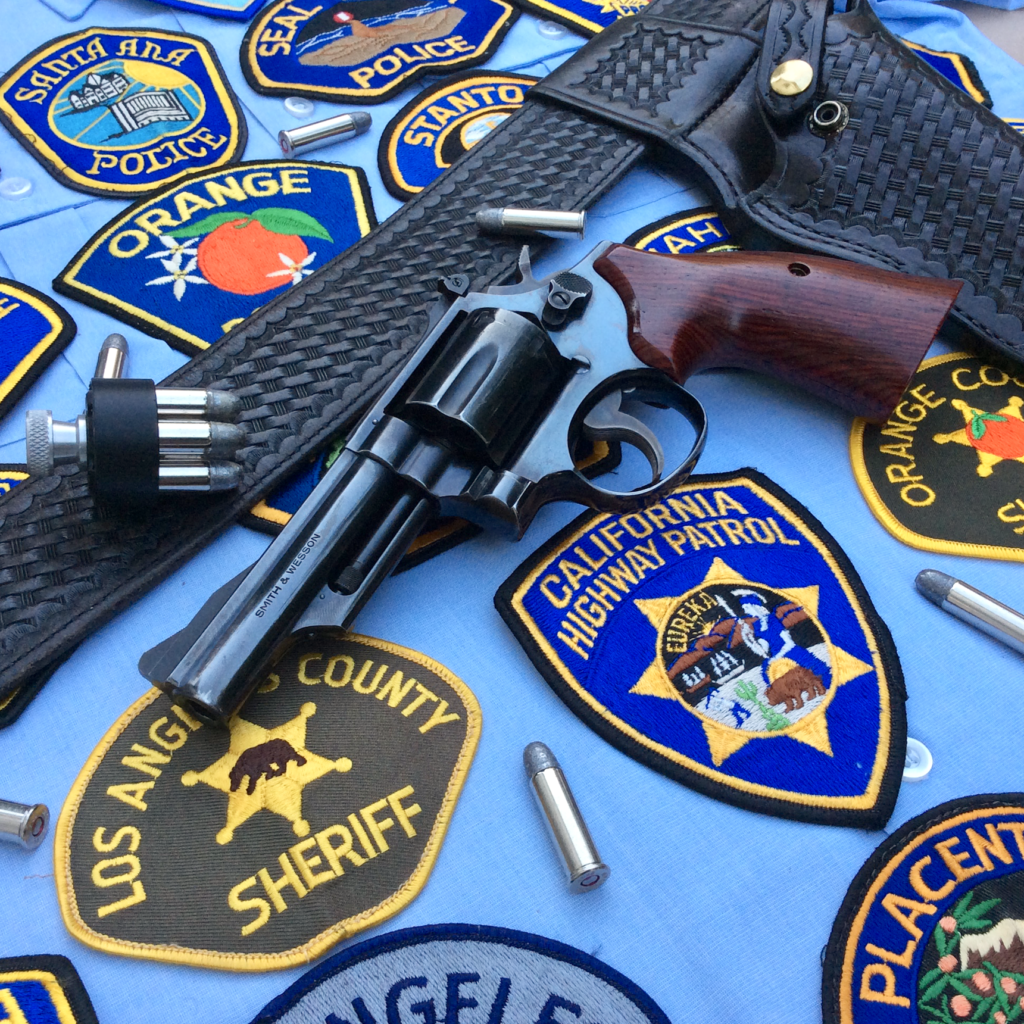 And it was.  The Combat Magnum, which became known as the Model 19 when Smith & Wesson assigned model numbers to all products in 1958, was a runaway hit from the start, and the factory had a hard time keeping up with orders. Even a full decade after its introduction, demand for the Combat Magnum far exceeded the supply, and the lawmen and shooters who had them were envied by their peers who didn’t.

Before the Combat Magnum, .357s were built on big, heavy frames (like the original home of the cartridge, the N-frame .357 Magnum, which was later renamed the Model 27), but the Combat Magnum was svelte. It was built on a .38 Special frame that was specially heat treated to withstand the stress of the Magnum load. It carried light, but hit hard, which is exactly what Jordan had wanted for a policeman who would carry it all day long.

Despite this successful formula, the Combat Magnum had a critical flaw. Like all K-frames, the barrel extension was too thick where it poked through the frame, and it didn’t allow enough clearance for the gas ring at the front of the cylinder. The solution was to shave a bit of material off the bottom of the barrel extension, at the 6 O’clock position, to provide enough room for the cylinder to swing closed.  This flat made the bottom of the forcing cone a little thin, which was no problem for the lower pressure .38 Special, but under a steady diet of high pressure Magnum ammunition, it could crack.

This wasn’t a problem in the early years, because most shooters and agencies favored the less intense .38 Special loads, and didn’t put a lot of Magnums through the guns. But by the early 1970s, America’s beleaguered police had increasingly turned to the .357 Magnum as a solution for the ineffectiveness of the .38 Special 158 grain RNL loads that were the mainstay of law enforcement, and the Combat Magnum’s roots as a .38 Special began to show. Long term, continuous use of .357 Magnum ammunition was breaking guns, and even Jordan had to remind the public that, “the K-frame is perhaps a bit light to stand up under a steady diet of full charge .357 loads. Anyone wishing to do all his firing with maximum loads would do well to stick with the heavier frame of the original .357 revolver.”

The Combat Magnum was a dream, but it was a middleweight, not a heavyweight. It would have been unfair to call it delicate, but it wasn’t a tank, either.

Casting About For a Challenger

After Bill Ruger’s stunning success with semiautomatic rimfire pistols and single action revolvers, it was only a matter of time before he turned his attention to the lucrative, double action revolver market. In true Ruger fashion, he designed an innovative product that sought to correct the perceived flaws in earlier efforts, at a price that would undercut the competition. The result of his efforts, in 1970, was the Security Six (and its brothers, the Service Six and Speed Six). From the beginning, it was clear that the Security Six was designed to take the Combat Magnum head on, and it was a worthy challenger. 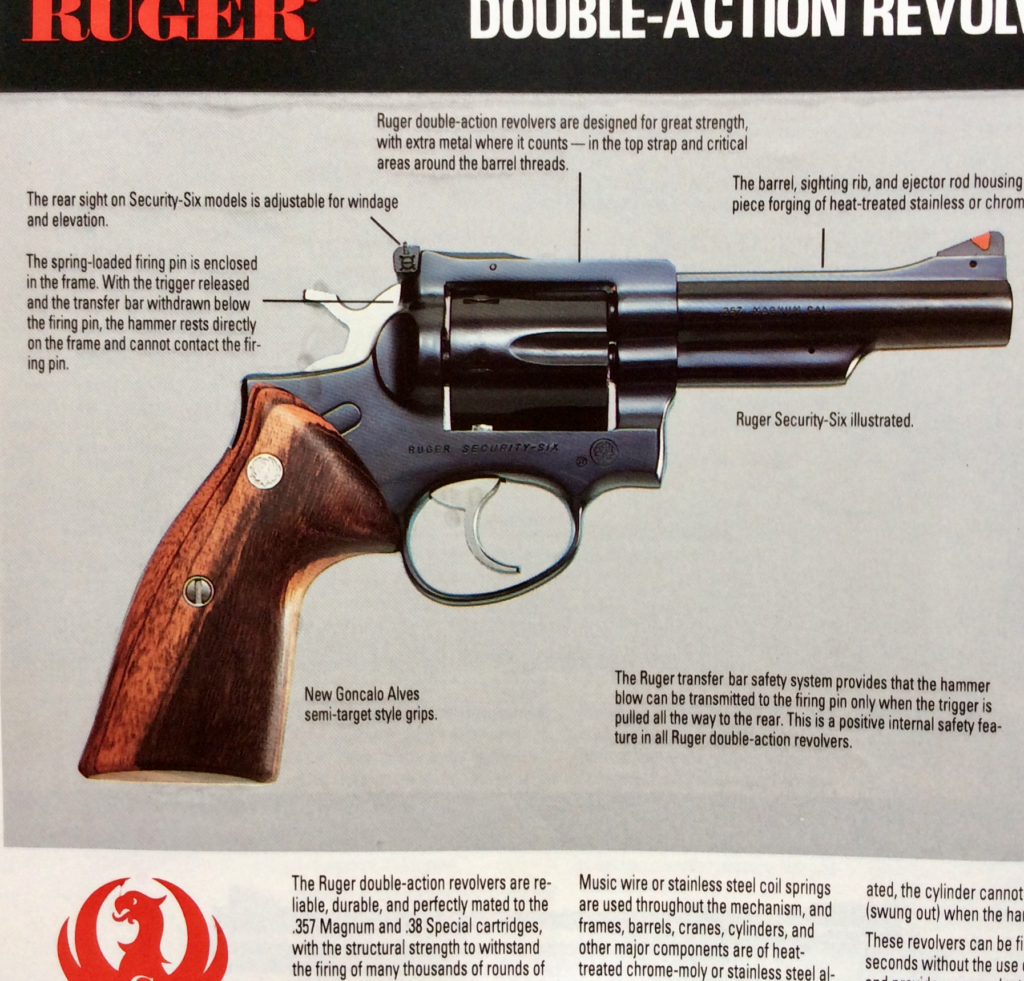 Like the Combat Magnum, the Security Six was a .357 Magnum on a medium-sized frame, with a thick barrel profile, an integrated ejector rod housing, and adjustable sights. Unlike the Smith & Wesson, the Ruger used a durable coil spring for the mainspring, and could be disassembled into its major parts and subassemblies using nothing but a coin, or the rim of a case. It also boasted a transfer bar safety mechanism, that made the gun drop safe. 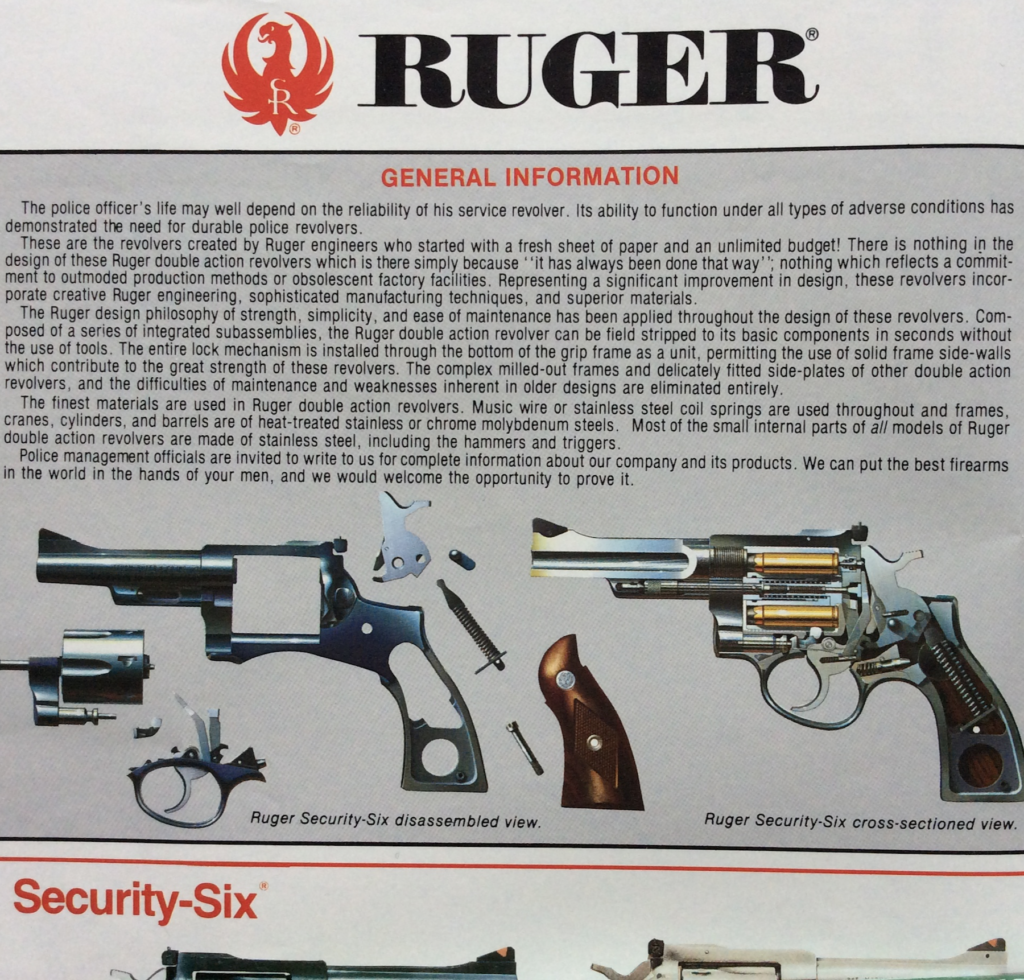 Most importantly, the dimensions of the frame allowed the barrel extension to remain unmolested. There was sufficient clearance for the cylinder to close without shaving the bottom of the extension, eliminating the Achilles Heel of the Combat Magnum.

The Battle Is Joined

Ruger was quick to herald these features, claiming the Security Six could “be considered to be the first fundamental improvement in double action revolver design in more than a half century.” The constant theme in the advertising and marketing of the Security Six was its great strength, and its ability to fire an unlimited diet of Magnum ammunition, in a thinly veiled indictment of the Combat Magnum and its problematic forcing cone.

With the Security Six, Ruger not only challenged the supremacy of the Combat Magnum, but the entire business model of the Old Guard manufacturers, to include Colt. A Sturm, Ruger ad of the period declared:

There is nothing in the design of these Ruger double action revolvers which is there simply because ‘it has always been done that way’; Nothing which reflects a commitment to outmoded production methods or obsolescent factory facilities.

The first volley of the skirmish had been fired. 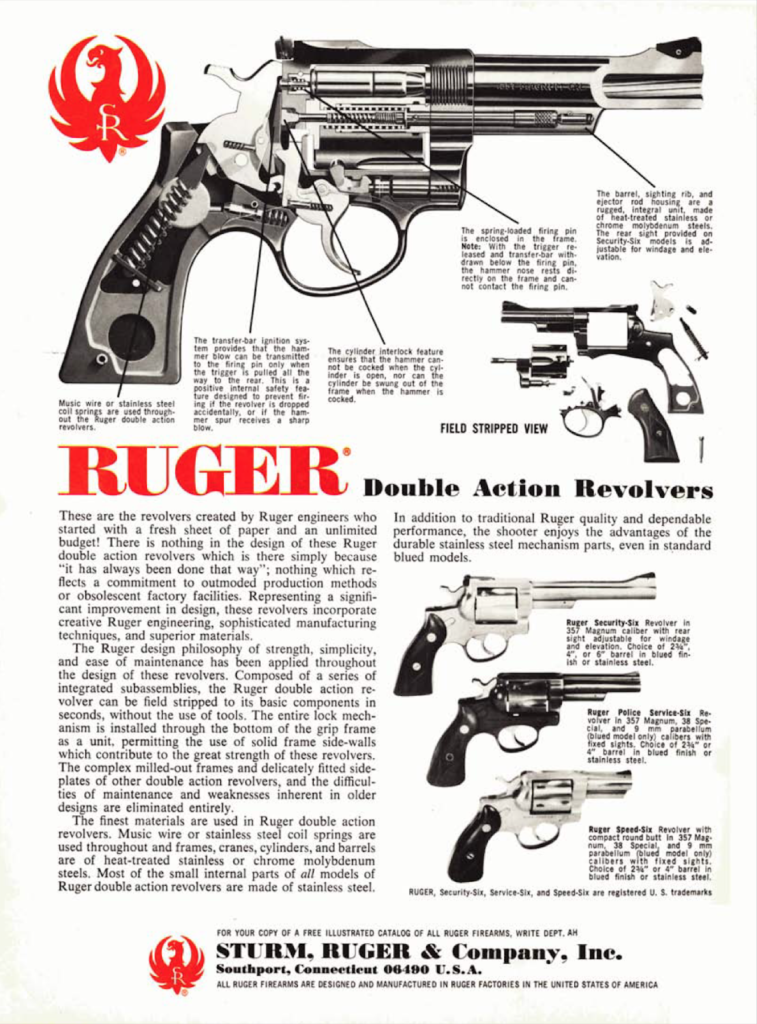 There was no doubt that Smith & Wesson needed to respond to this serious challenge, but how?  In the years that followed, Smith & Wesson ramped up their advertising and tried to cement their longstanding relationships with influential police departments. They largely seemed to ignore the young upstart in their marketing and advertising, as if acknowledging Ruger’s thrust into the market would elevate the new kid to some kind of undeserved peer status.

Yet, the success of the Ruger product couldn’t be ignored. The Security Six was immediately received as a quality revolver that compared favorably to Colt and Smith designs. Furthermore, it boasted a lower suggested retail price, beating the Model 19 by roughly 15 percent, and the Colt Trooper Mk III by roughly 29 percent (1976 numbers). The Rugers sold well, and put a dent in Smith & Wesson’s bottom line. The marketing department could ignore them, but the accounting department could not.

The counter to the Security Six came in 1971, when Smith & Wesson introduced the Model 66 Combat Magnum Stainless. After the 1965 introduction of the Model 60 Chiefs Special Stainless, the first production revolver in stainless steel, there was an instant demand for the beloved Combat Magnum in the new material. In bringing the Model 66 to market, Smith & Wesson knocked Ruger back on its heels, and swung the pendulum hard in the direction of Springfield, Massachusetts.  Ruger responded with a stainless version of the Security Six in 1975, but the four years it took to bring that gun to market left Smith & Wesson in the lead without any serious competition in the booming stainless revolver market. And they weren’t done yet.

Make sure to look out for Part II of “The Great Revolver Frame War”!

23 thoughts on “The Great Revolver Frame War – Part I”