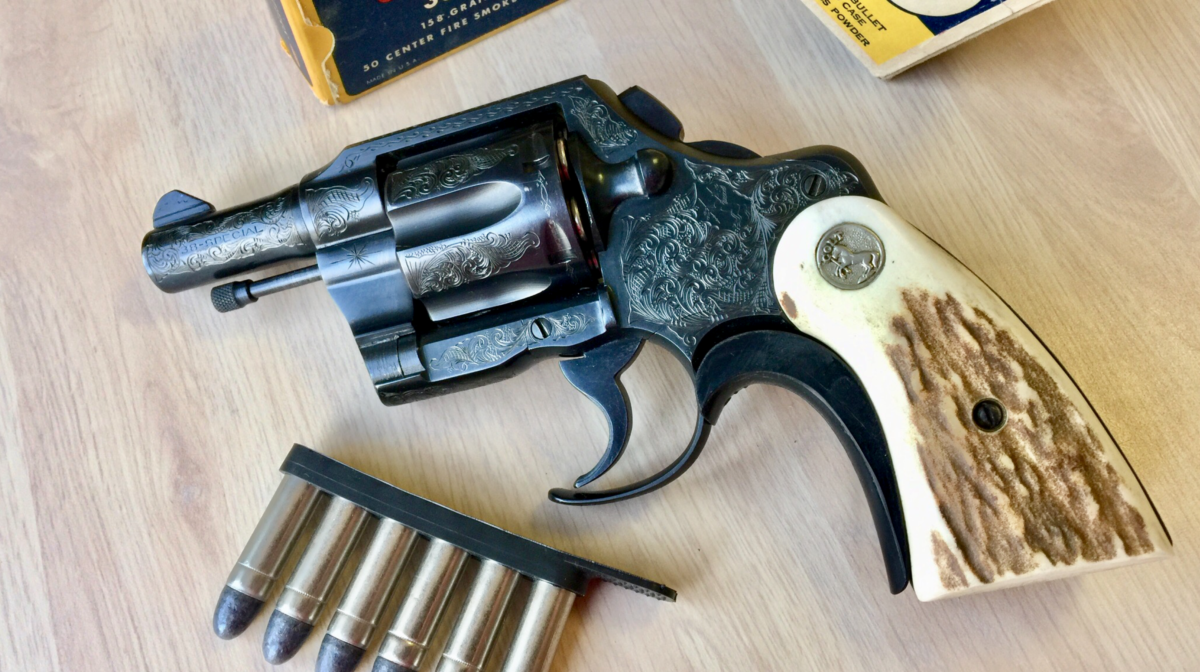 My dad subscribed to many of the gun magazines back in the mid-1970s and I’d leaf through them, pausing to read a story when something special caught my eye: a Fitz Colt. One article in particular featured a photo of a stubby revolver with a short barrel, a short grip, a bobbed hammer, and a cut away trigger guard. That last feature was the most intriguing to me.

The bobbed hammer was an obvious modification so it wouldn’t snag during a pocket draw or from a holster.  The short grip was a way to make the gun smaller and more concealable.  But what was up with that missing front of the trigger guard?  Back then my ten year-old mind never considered half the trigger guard being absent as “dangerous.”  To me it was just supercool and there had to be a “professional” reason for it.

So I read that article thoroughly.  It explained that John H. Fitzgerald retired from the NYPD and began working for Colt in 1918.  The shortest barrel available from Colt was 4-inches.  Fitz (as he was known) cut the Colt’s barrel to 2-inches or less.  He bobbed the hammer and then shortened the grip (not an easy feat as it required repositioning the hammer spring) to make a more concealable pocket gun.  This custom work eventually resulted in the mass produced Colt Detective Special.

But the cutaway trigger guard was the most interesting feature of Fitz’s customized revolvers.  Fitz travelled extensively and trained police departments and gave shooting exhibitions all around the United States.  He testified at criminal trials about firearms, ballistics, and shootouts.  He also set up a small table and performed gunsmith work on Colts at the Camp Perry shooting championships.  The man knew his way around guns.  His book “Shooting” was published in 1930 and is still available on Amazon.  If you give it a read, you’ll be surprised to see how far ahead of his time Fitz was.  He studied firearms and their use and passed on his findings to law enforcement and the military.

Fitz was known to have very large hands with big old sausage fingers.  The cutaway trigger guard allowed him to get his index finger on the trigger quickly when drawn from the holster.  While wearing gloves from the period of time he lived, the open trigger guard allowed fast access as well, even for those with average sized hands.  It has been said that pulling the trigger from inside a coat pocket was also more readily accomplished without the entire trigger guard getting in the way.  Those were the days when every man wore a suit and overcoats and gloves were common on the east coast with its chilly weather.

The blood in today’s litigious counselors of the lawyerly type would freeze solid if a firearms manufacturer were to offer a cutaway trigger guard (I know, that’s a big assumption that they have blood pumping inside).  But Colt just introduced the Night Cobra with a bobbed hammer.  It’s just a hacksaw and file away from being a modern day Fitz!

True Fitz Colts are rare and command astounding prices from collectors.  They were made using New Served large frames and various other Colt small frames.  A real one has the “VP” proof mark relocated from the left side of the frame by the (missing) trigger guard to the rear of the trigger guard.  Many gunsmiths over the years have customized Colt (and S&W and Ruger) revolvers into pseudo Fitz Colts.  Many are very well done and some are not.

Crafting My Own Fitz Colt

My interest in Fitz Colts began when I was just ten years old but it was rekindled when a friend working the front desk at my police department handed me an old glass peanut butter jar full of oil.  Inside were his friend’s grandfather’s gun parts.  The grandfather had passed away and while cleaning out his home, this jar was found.  So he gave it to me.  The only interesting part inside was a professionally shortened and re-crowned 2-inch .38 Special Colt Official Police barrel.  The barrel actually read, “icial lice” in two lines instead of “Official Police.”  The “Off” and “Po” had been cut off.

My mind’s cogs began to turn and I soon found myself searching Colt Official Police on Gunbroker.com.  One of the most expensive customizations on a revolver is shortening the barrel and then re-crowning it.  That’s a labor-intensive job and that means it cost money.  But this little barrel already had that covered.  I was saving money already! 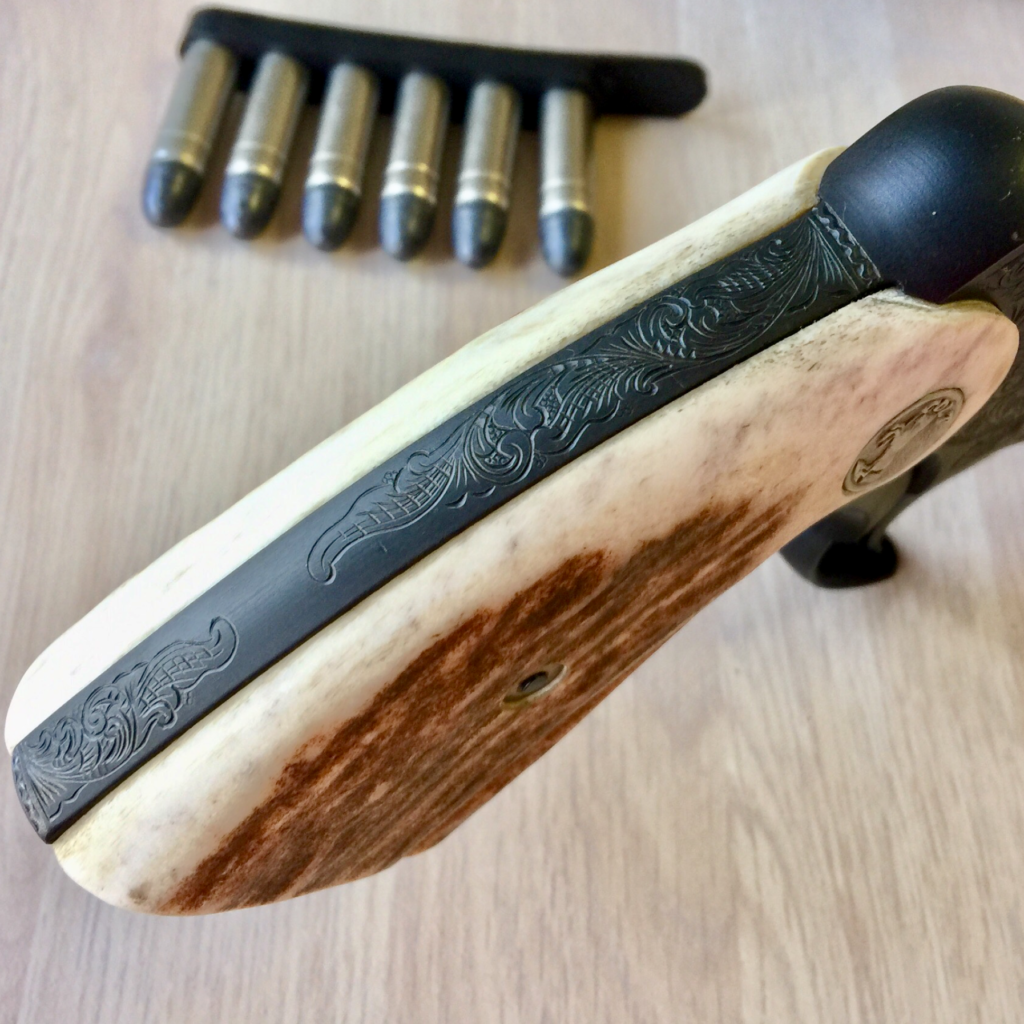 I bought a 1948 Colt Official Police .38 Special that was up for auction and I got it cheap because the barrel was all rusted out and the finish was lousy.  That didn’t matter to me because I had a mint little barrel already.  The gun was mechanically sound with worn walnut handles sporting factory Colt medallions.

I gave it over to an excellent local gunsmith and asked him to channel his inner Fitzgerald.  He removed the 6-inch barrel and installed the peanut butter jar 2-inch version.  He removed the front sight from the old barrel and reattached it to the shorter one.  He bobbed the hammer and then he cutaway the trigger guard in true Fitz style.  I had him leave the grip alone since I’ve got big hands and shortening it any more would cause me problems.  When I got the old Colt revolver back, many people said I should leave it just as it was.  The finish was missing everywhere and it had some serious personality, like a boxer at the end of a rough career. 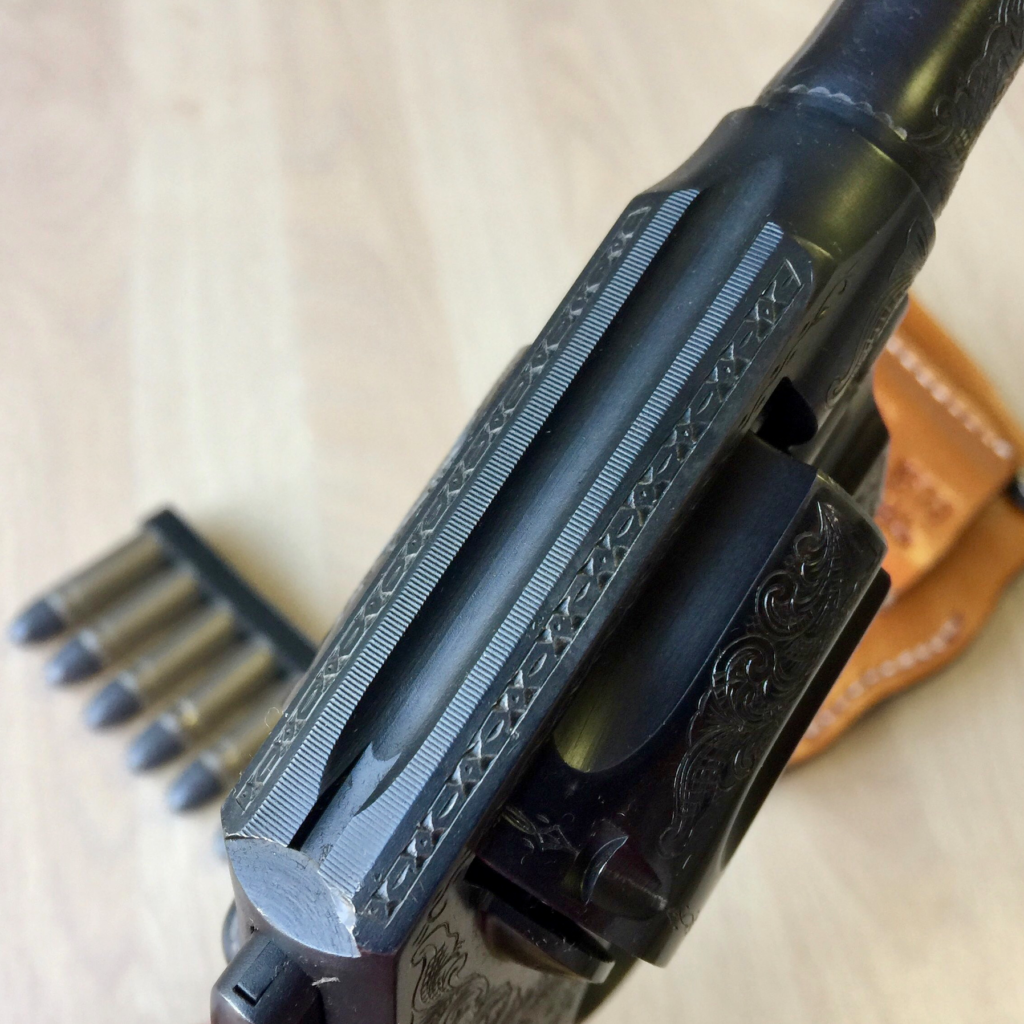 But I like my guns shiny.  So I had it refinished in a polished blue.  The gentleman who did the work was an artist and he didn’t lose any of the rampant Colt logo. But he did eliminated the “icial lice” at my request while retaining the .38 Special caliber marking on the barrel.  I sent the original medallions off to Grashorn Gunworks and had them installed in a handsome set of American elk stag handles (requested with only one quarter bark).  Then I had the Fitz’ed Colt engraved by Michael Gouse with 75% coverage American Scroll.  I repurposed a cigar box into a presentation case and glued a Fitz Colt patch inside the upper lid.

Carrying and Shooting the Fitz Colt

Tom Dyer of Saguaro Leather made an intricately carved holster for my custom Fitz’ed Colt.  He used silver Mercury dimes to cover the screws heads that are used to dial in the holster’s retention.  By complete coincidence, one dime was from 1927 and the other was from 1929…the years my dad and mom were born.  I wish they were still here to see me shed a tear when I saw those dates.  Sometimes things just fall into place.

I shipped the little .38 Colt off to Frank Glenn in Arizona, as he is known as a one of the few expert gunsmiths who can tune a Colt double action to perfection.  When I brought the gun with me to the Shootists Holiday in New Mexico this past June, several others tried the gun out and were impressed with the smooth double action trigger.  But they were more interested in how the cutaway trigger worked in real life when drawn from the holster. 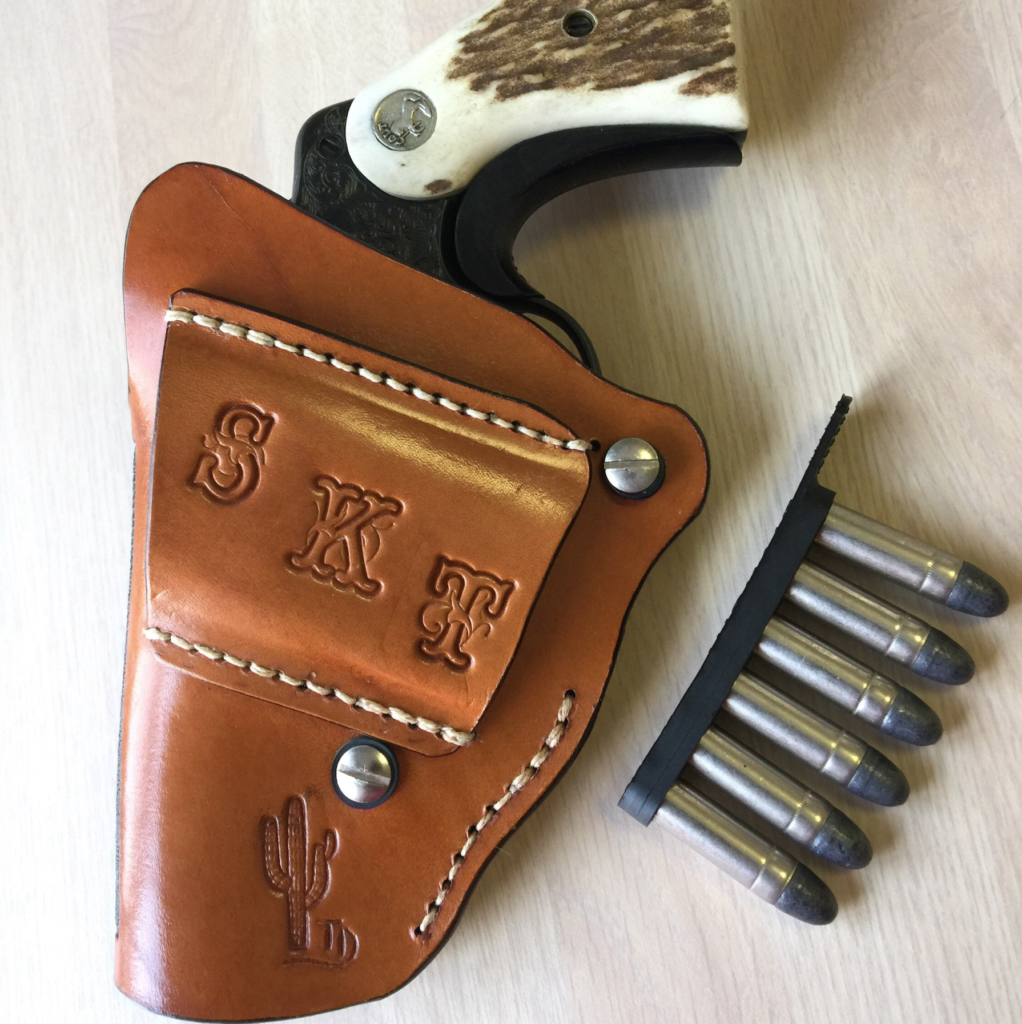 For up close and fast, one-handed double action shooting, the Fitz Colt with a cutaway trigger guard performs very well.  It’s perfectly safe in the holster with its trigger covered.  I would never carry it without a holster.  Actually, I would never carry this gun as an actual defense gun.  This Colt is to satisfy my own desire to see how the Fitz Colt worked and handled in real life.  It is genuinely fast to fire out of the holster.  We’re only talking milliseconds here and Bill Jordan said he would just file down the side of the front of the trigger guard to get his finger on the trigger faster.  However, other notables like Charlie Askins, Charles Lindbergh, Rex Applegate, and even Clyde Barrow were known to carry Fitz Colts.

It is interesting to note that we use our fingers without thinking to press against the trigger guard when holding the revolver to reload or re-holster or just to gaze at it.  When that trigger guard is missing up front, you would be surprised how easy it is to drop the gun.  Thankfully I’ve caught myself before it actually fell to the ground, but I caution others when they handle my Fitz’ed Colt.

John H. Fitzgerald wasn’t the first gunsmith to offer custom work, but he was a forebear to making standard sized handguns smaller.  You can thank him when you’re packing your Colt Detective Special, S&W J-frame, or even your Glock 26.  Just don’t get your Dremel out and whittle away your Glock’s trigger guard.  Cut away Fitz’ed trigger guards are only for “professionals!”

14 thoughts on “A Special Fitz: My Fitz Colt Official Police”