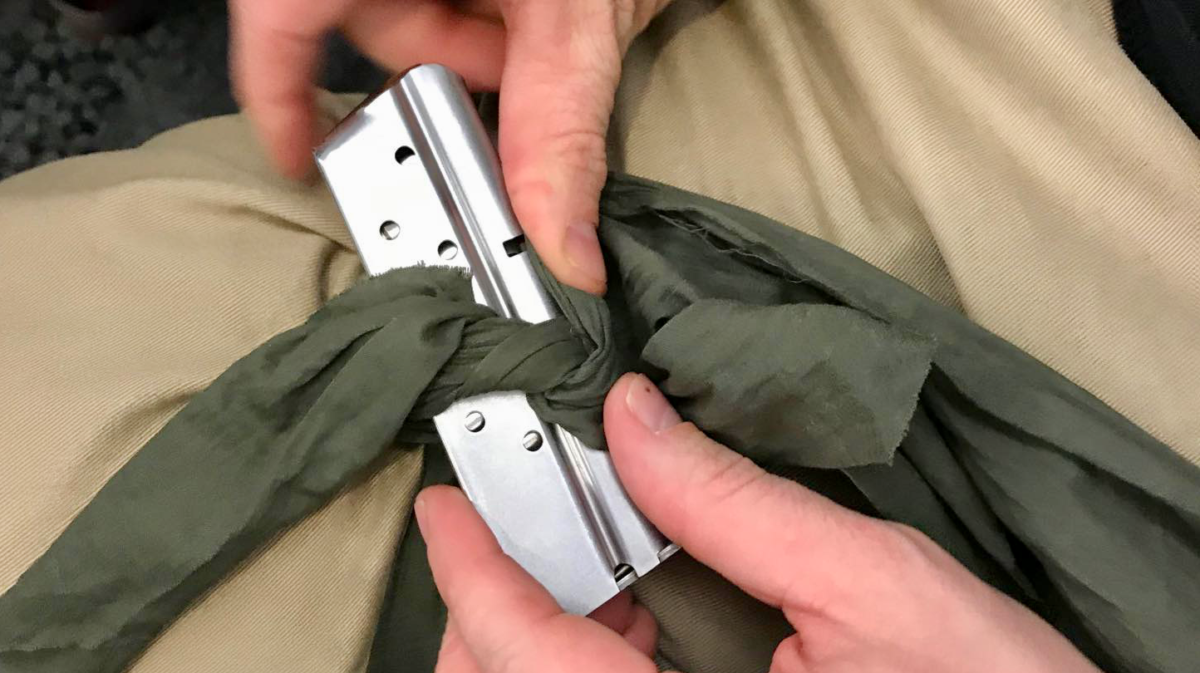 My girlfriend and I recently had the opportunity to attend Greg Ellifritz’s Tactical First Aid & System Collapse Medicine. As far as I’m concerned this class or one like it is must-have training, whether you’re a RevolverGuy or not. This is an after-action review of the class.

Though Greg sometimes teaches this class in longer two-day formats, this was a single day of training. Greg opened up with a bio and an explanation of, “what’s a cop doing teaching a medical class?” Greg’s medical bio/credentials are impressive, and after about five minutes of watching him teach there’s no doubt he’s imminently qualified. After the intro we dove head-first in tactical first aid. 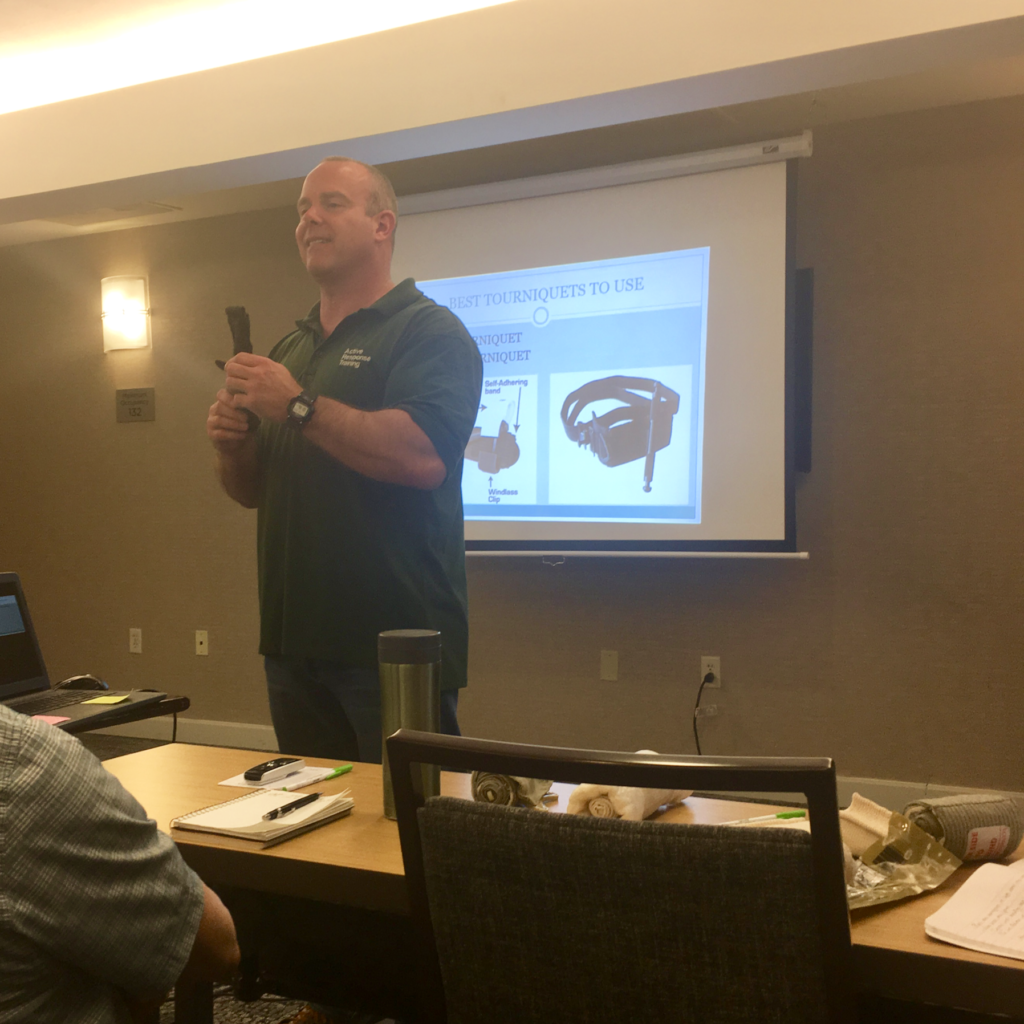 Most of the morning was spent learning and practicing interventions for massive hemorrhages. Greg thoroughly covered direct pressure and pressure dressings, wound packing, the use of commercial and improvised tourniquets, and hemostatic agents. Ample supplies were provided to practice applying dressings and tourniquets (but obviously not hemostatic agents) to ourselves and each other.

The “M” (in MARCH) took the better part of the morning and for good reason – massive hemorrhages comprise a significant portion of preventable battlefield injuries. If you’ve never been through TCCC I’m not going to attempt to summarize it here: GET YOURSELF TRAINED!

Next we moved on to airway. We moved through this section fairly quickly. The long and short of “Airway” is: make someone’s airway as clear as you can make it using the head tilt/chin lift methods (and maybe a mouth sweep), use a nasopharangeal airway (NPA) if you have one, and let the patient get comfortable. If the patient isn’t conscious, place him or her in the lateral recumbent position. We finished this up just in time to go to lunch.

After lunch we came back and picked up with “Respirations.” This section covered sucking chest wounds, tension pneumothorax, and the like. Again, Greg covered the appropriate equipment for treating such wounds: chest seals from Asherman, Hyfin, et al, thoracentesis, and (briefly) the cricothyrotomy.

I’ll be honest: when we showed up at the conference room for this class I wondered how Greg was going to blend tactical first aid/TCCC and “collapse” [as in societal collapse] medicine into a single, coherent class. Let me tell you – he did a hell of a good job at it. As he explained upon initially opening the class, Greg has traveled extensively in least-developed nations. He as also spent a good amount of time in remote environments as a hiker and backpacker. His unique perspective is something I’ve not seen in a medical class before.

The collapse medicine portion of the class was designed as a melange of skills to cover austere environment scenarios – from the “end of the world” to being three days away from definitive care on a trail somewhere. This nearly seamless blending occurred when we moved in the the “C” of MARCH: Circulation. 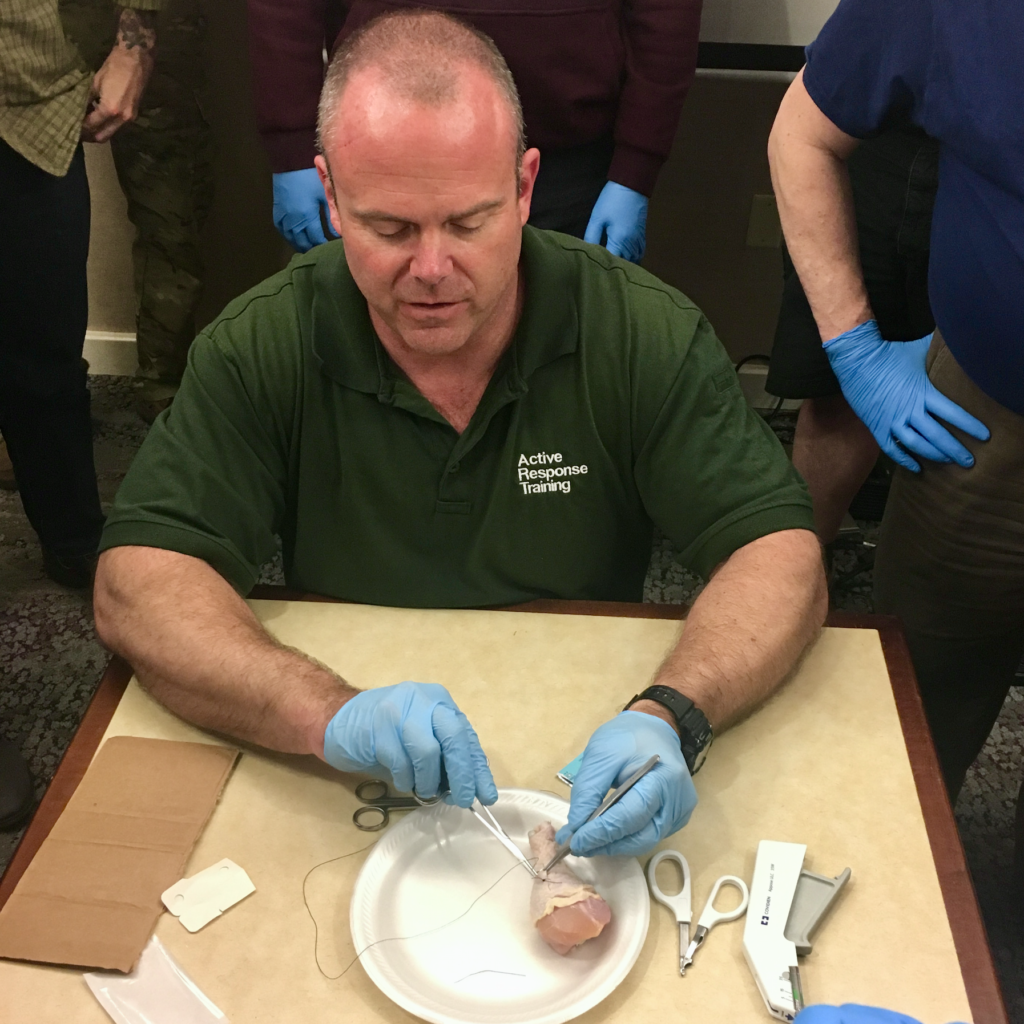 During this portion we went into wound care and closure. Rather than stick strictly to the TCCC script, he also discussed cleaning/sterilizing wounds with nothing more than potable water, and differences in the various antibiotic creams on the market (and why Neosporin probably isn’t the best choice). We also talked about wound closure using Steri-Strips, Super Glue, suturing, and staples.

The sexiest thing we did in this portion was suturing. Greg provided suturing supplies (needles/ligature, forceps, tweezers, scissors) and a leg to sew up. . . a chicken leg! Academically this was interesting, but I doubt I’ll ever suture anyone up. We also had the opportunity to remove our sutures and apply staples to the same “wound”. 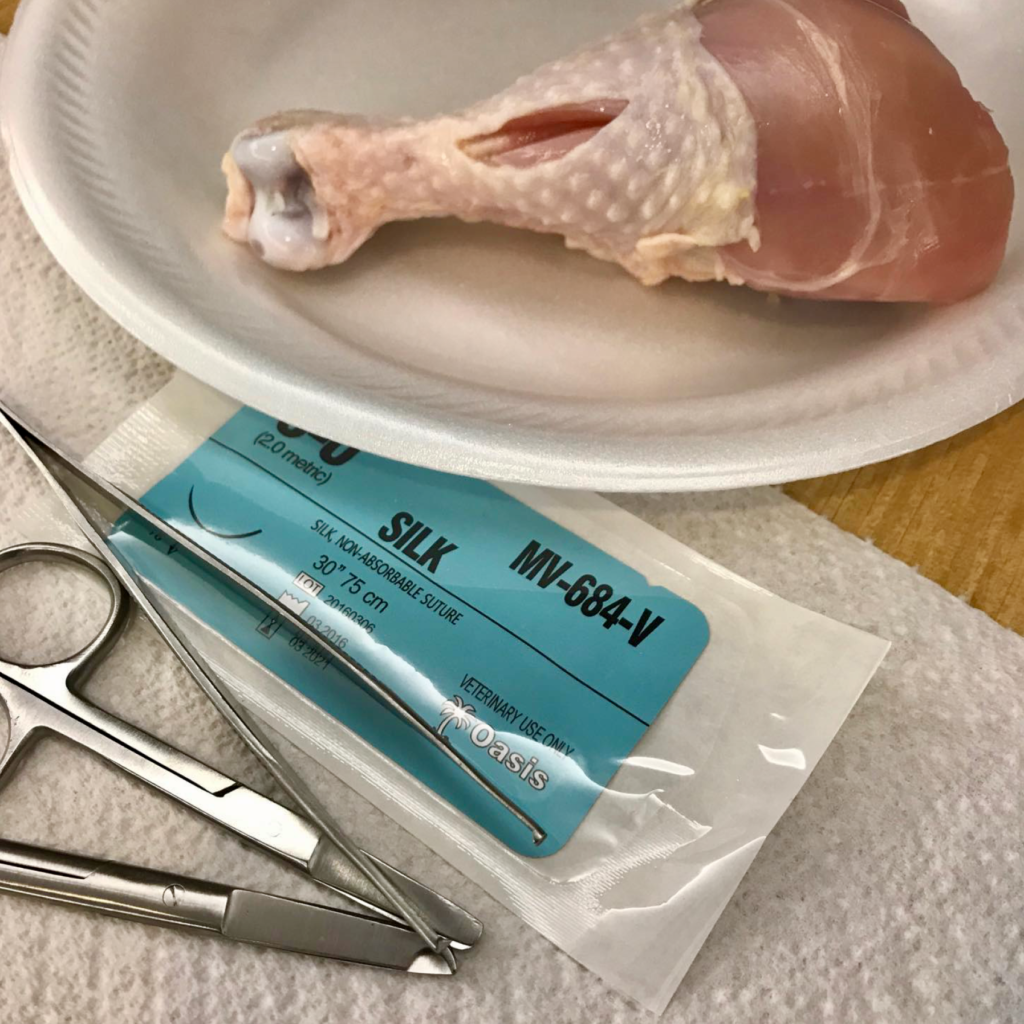 After suturing we moved into a quick discussion on collapse medicine. Again, I admit being a little skeptical of the need for a stockpile of antibiotics and other meds, but Greg made a very compelling case. Even if you’re not concerned with a total collapse, recent natural disasters have rendered fellow Americans cut off from medical care for days. I have decided, thanks to Greg, I want the ability to take care of myself medically and will be following some of his advice here.

I have a decent amount of medical training. I have attended a First Responder course, been certified as an EMT-B, attended TCCC at least four times, and have attended another five-day course with an accompanying full day live-tissue lab. Years ago I was a volunteer fireman and responded to any number of medical emergencies and injuries, and I’ve seen injuries first-hand on the battlefield. My girlfriend, on the other hand, has minimal medical training and experience. She has attended Red Cross First Aid and CPR within the last two years. With the large difference in our medical educations, I wasn’t sure the class would be a great fit for both of us.

And I was completely wrong. We were both fully engaged in this class from the very beginning, and both took several full pages of notes. First, I was surprised at some the changes in TCCC guidelines since my last attendance several years ago. I was also very happy to be informed of some of the changes in equipment, like the updates to the latest CAT (tourniquet) and the latest approved hemostatic agents. The TCCC portion was also a phenomenal refresher and a hard reminder that medical training – like firearms training – should not be considered one-and-done. 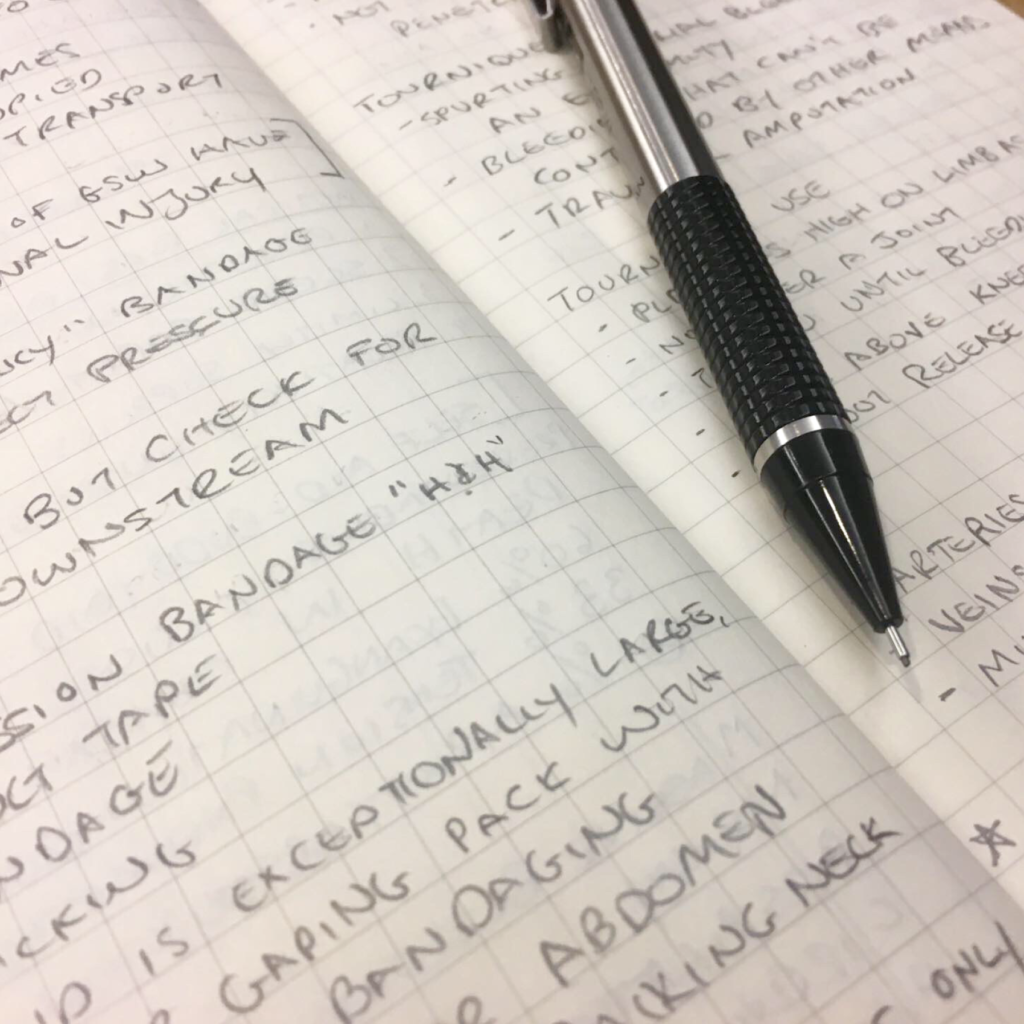 My girlfriend got suddenly immersed into the world of tactical medicine – and hasn’t stopped talking about it since. She loved the way Greg presented all the information. It was all totally accessible – and applicable – to her despite not being a “tactical” gal. She also really appreciated his presentation of not only the “how” of various interventions, but also the “why.” Though she has carried a first aid kit for a while, she has massively deeper understanding of why she carries the things she does, and how to use them. She left the class with a much higher degree of confidence in her first aid abilities.

Equipment is far less important than knowledge when performing first aid. This doesn’t mean that equipment is not important. One question that came up in the class (and probably comes up in all of these classes) was, “what do I need in my first aid kit?” Greg’s answer could not have been better. He advised the student to look at the techniques we’d performed throughout the day and make a list of what’s necessary to perform them. Training should drive gear – not the other way around. Based on this training, we are making some changes to our gear.

Some of these changes are simple updates – we still have CAT tourniquets from circa 2005 in our kits. These tourniquets are going to be relegated to training aids and backups to the new versions we ordered. My girlfriend and I also upped our game with new pressure dressings, hemostatic agents, and chest seals. On the collapse medicine side. . . we will definitely be making some big changes. If you want to know what they are, attend Greg’s class!

Your medical skills are just as important as your handgun skills. If you have no formal training at all – get something! I can’t recommend Greg Ellifritz’ Tactical First Aid & Collapse Medicine highly enough. The class was totally accessible to beginners, while still be appropriate for those with formal medical training. Greg’s instructional style is entertaining, engaging, extremely effective. His knowledge obviously extends far deeper than the level to which he was teaching.

But there is one thing: I would strongly encourage you to seek a longer version if possible. There is a TON of information here, and I’d love to see it all. My guess is, so would you. A single day just left us wanting more.