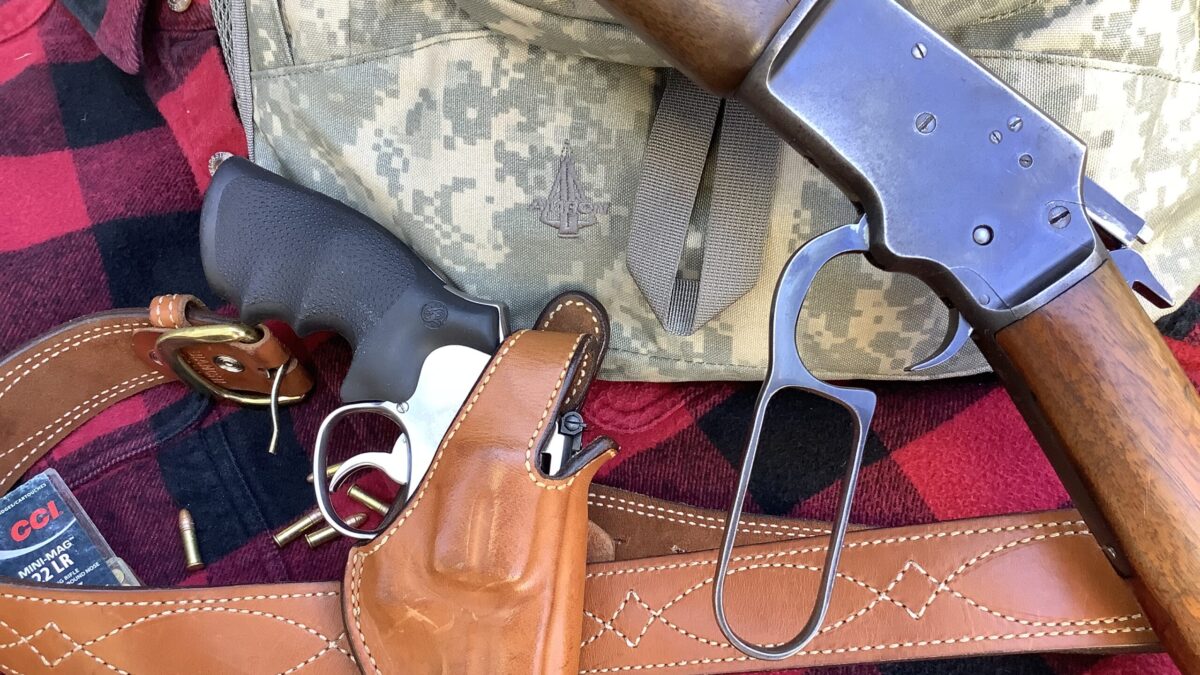 His breathing was starting to sound as loud as the crunch, crunch, crunch of his boots on the dry snow, so Matt decided to take a breather and get a drink. The water from the canteen was cold enough to make his teeth ache, but it felt good on his throat, which wasn’t used to the dry air up there in the mountains, anymore.

His mind wandered a bit, as his eyes scanned ahead for the spot. The first time he’d been up here, he was probably, what . . . eight, nine years old? A wiry kid, with springs in his legs, and youthful energy to burn, he’d made short work of the hike out to the spot that his teacher, Mr. Riley, had shown them on the map. The new rifle had felt heavier in his boyish arms back then, but he hardly noticed the weight, now, as an adult. He sure wished he had those youthful legs and lungs back, though!

It was pretty remarkable that things had stayed the same up here, in the intervening decades. The land was under Bureau of Land Management control, so Matt figured that probably saved it from the incessant march of encroaching development. He’d driven past a lot more homes on his way up the mountain than he remembered back then, but at least this area had been left unmolested.

It was just a short distance left to the spot from where he stopped, and it didn’t take Matt long to cover it. As a young man, it had felt like a long journey from his dad’s old F-100 pickup, but it actually wasn’t far at all—maybe a mile from the same drive-in campsite where his much newer F-150 was now parked.

The spot was a remnant of the area’s gold rush past. Back in the latter half of the 19th Century, sturdy men had pierced the Earth with shovels, picks and explosives to dig for precious metals hidden beneath the surface. There was always more rock and dirt than gold or silver, though, and the leftovers had to be put somewhere, so the miners piled the excess into tailings like this one, which made a super backstop for target shooters a generation or two, later.

Matt remembered scrambling up the incline to post targets on the slope when he was a young man, but he wouldn’t be doing that today. It had been lots of fun to watch the various soda cans, pine cones, rocks, and other makeshift targets come tumbling down when they were hit, but with the light coating of snow on the hillside, he’d pass on that, today. He had a few more miles on the odometer now, and there was no sense turning an ankle so far away from the truck.

Matt worked his right arm out of the pack to hold the rifle, and set the load on the ground with his left. He fetched the portable target stand with the self-sealing paddle out of the bag, then rested the gun on top of the pack, where it would keep out of the snow.

The sight of the old levergun brought back a flood of memories from the days when the finish was still an unblemished, deep blue, and his hair was still a uniform, deep brown. “I guess we’ve both aged pretty well together,” he mused out loud, earning a screech from a curious jay, perched in a nearby tree, in response.

The rifle had been the ultimate Christmas gift. There had never been another Christmas present, before or since, which generated so much excitement. Even the brand new sixgun on his hip, which he’d been yearning for, nigh on several years (and which he’d “helped” Santa procure and wrap this year, because he knew the ol’ guy was busy with the children’s lists), hadn’t jazzed him as much as the old levergun did, back in the 8-track days.

Drifting back, Matt remembered the jolt of excitement that hit him when he first saw the wrapped box, under the tree. He and his brother had awakened early that morning—much earlier than Mom and Dad were ready for—and couldn’t resist the magnetic pull of the tree in the living room. With bathrobes hastily wrapped around their bodies to fend off the cool morning, they scurried down the hallway and rounded the corner to the great room, eyes ablaze, and hearts pounding.

At first, Matt was dazzled by the spectacle of the brightly-lit tree, the filled stockings, and the twinkling manger scene, with its porcelain figurines of Baby Jesus, Mary, Joseph, and the Three Wise Men. It took a while for his eyes to filter the scene and sort through the variety of wrapped presents under the tree, but within a few moments, he saw it.

The long, slender, rectangular box was a sure giveaway. It could only be one thing! It wasn’t thick enough for a baseball bat, and it was too long for a tennis racket. His stomach did a somersault as the realization set in that it had to be the rifle he’d showed his dad, at Finnegan’s Gun Barn.

Despite their best efforts to be quiet, the pair of excited boys had roused Mom and Dad from their short slumber, and soon they’d received the green light to dive in. As Matt’s brother, Chris, took a hard right to investigate something that caught his eye over there, Matt went straight for the long box with the tag that simply read, To Matt, with love, from Mom and Dad.

Hefting the box, Matt felt his suspicions were confirmed. It was the right weight for a rifle, and the load was distributed like a rifle would be, but a fleeting moment of panic crossed his mind—what if it actually was a baseball bat? Banishing the horror to the back of his mind, he started in on the paper.

The first tear revealed the truth. As the colorful paper peeled away from the corner of the box, he saw a label on the end flap with a line of handwritten text ending in “ . . . ong rifle,” and he knew right away what the missing characters were. As the tear lengthened, and the wrapping was lifted away, he was left cradling a box with the distinctive horse and rider logo, and “Marlin,” emblazoned in bold script, on the lid.

His fingers trembled a bit as he gingerly opened the box to reveal the most beautiful sight he’d ever seen. The lights from the tree reflected in the deep blue finish and bounced off the shiny wood like a million colored jewels, as his wide eyes ran the length of the gun, from tip to tip. A sweet, oily smell danced in his nostrils as his hands lifted the cold, wood and steel marvel from the box like it was fragile, and could crumble in his grasp, if he was careless.

Even in his excitement, he had the awareness to keep the gun pointed away from the others, and towards the brick fireplace. The lever was a little stiff, and didn’t want to yield to his timid attempts, at first, but with a firmer grasp on the fore end, and a good, firm pump, the bolt slammed back and exposed the hungry chamber, which eagerly waited to be fed from the brick of ammunition that would be discovered later that morning, amongst the other gifts.

Now, some four-and-a-half decades later, Matt could still remember the moment as if it occurred yesterday. He didn’t remember much about the rest of that long ago, Christmas morning, other than a general sense of the shock, excitement, and burning desire to get the new rifle into action right away, but the moment of the reveal was engraved into his mind like words in stone.

The jay’s fluttering departure from the tree brought him back to the present, and Matt continued with his preparations. With the target stand set, he fished into the pack for his earplugs and shooting glasses, and got them in place. Squatting down (slowly!), to keep his seat out of the snow, he rested the butt of the rifle on his right thigh, and reached his left hand into the ruck, to find . . . nothing?

“What the heck?” he muttered. Doubling his efforts, he fished around inside the main compartment, feeling for the corners of the plastic ammunition box, but couldn’t locate it. He tried all the exterior pockets next, expecting to solve the puzzle any moment, but came up dry there, too. A quick pat-down of his pockets didn’t locate the ammo, either, so he dumped the contents of the pack onto the snow, to search through them again.

The ammo was nowhere to be seen in the small pile of odds and ends, and Matt began to retrace his steps, back at the truck, in his mind. He could see the gear spread out on the opened tailgate, remembered adding his lunch to the backpack, and unzipping the rifle case, and . . .

He could see it now. After topping off the new revolver on his hip and holstering it, Matt had set the box with the sliding lid aside, in the bed of the truck, because he didn’t want to spill its contents. In his excitement to hit the trail, he’d left it behind.

Looking down at the pile of everything-but-ammo on the snow, one of the apple slices in the Ziploc bag smiled up at him, as if it was mocking him for his mistake. The jay was back now, and joined in the fun with a screech of his own, aimed at the forgetful, middle-aged boy with the good-looking sandwich.

Matt couldn’t help but laugh at himself, and be grateful that Chris wasn’t along to see it happen. He never would have let him hear the end of it! The CRS jokes would have been merciless, he thought, with a chuckle.

For a fleeting moment, Matt thought about emptying the revolver and calling it a day, but that just wouldn’t do. The cherished Marlin deserved a workout, and he knew that a single cylinder through the new revolver would never be enough to whet his appetite.

The hike back to the truck seemed longer than the way in. Maybe he remembered it right, as a young boy, after all? No matter. It was a beautiful day, and the memories of a Christmas past, blended with a Christmas present, kept his mind cheerfully occupied on the journey.

The noisy jay carefully shadowed him from the treetops, the whole way back, hoping for a second chance at the sandwich. Matt eventually offered him a crust, back at the truck, as a bribe to keep his beak shut about the senior moment.

The bird drove a hard bargain though, and the deal wasn’t closed until a potato chip was added to sweeten the pot. Matt flicked it at him, from his seat on the tailgate, and wished him, “Merry Christmas!”

He swore the bird screeched “Merry” back at him, before flying away with the chip.

Merry Christmas to all of our wonderful RevolverGuy friends!  We wish you and your families the very best, and look forward to getting back together with you in the New Year! God Bless!

16 thoughts on “A 2022 RevolverGuy Christmas Story”