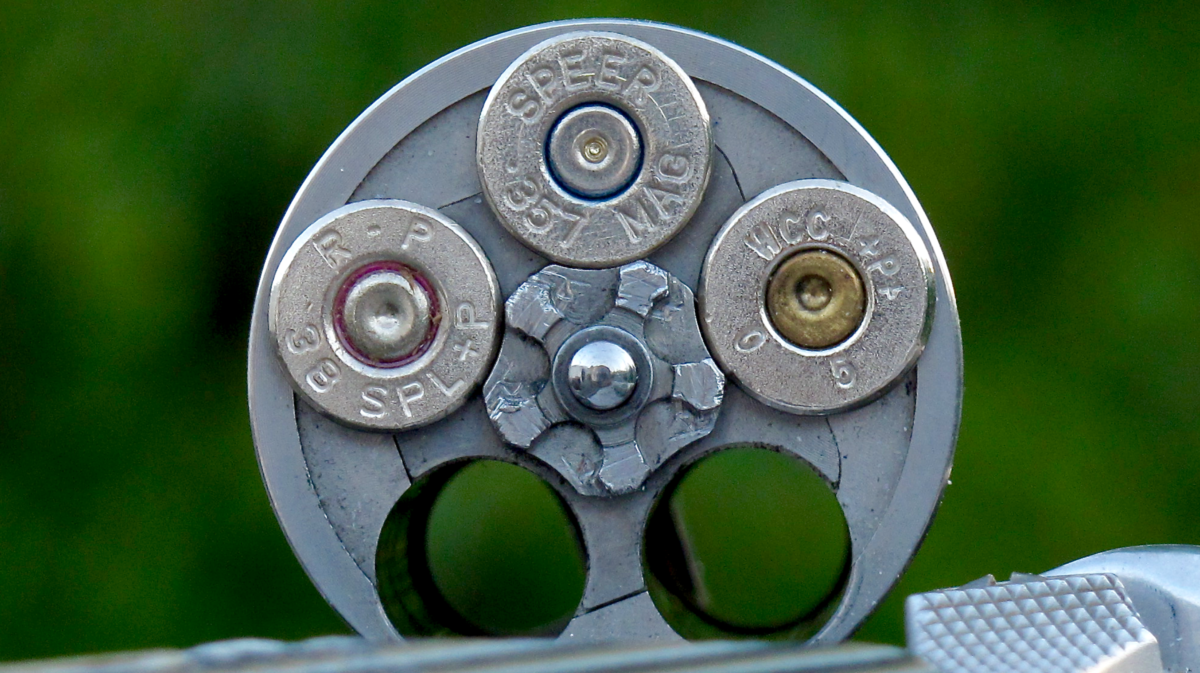 There are two sides of the debate over shooting and carrying .357 Magnum ammunition in a small revolver. Both sides seem to be a bit dogmatic in their position, and I’ve been confronted with this a couple of times recently. I carry a J-Frame revolver as my primary defensive arm, and I carry it loaded with ammunition headstamped “.357 MAG”. I am a man who can appreciate a little nuance and I generally shy away from generalizations, so here are my thoughts.

WARNING: I’m about to take a hard right into revolver-geek territory. Proceed with caution.

Side A: “You can’t Control a Magnum…”

The first side of this debate says you cannot carry magnum ammunition in a revolver. No ifs, ands, or buts. This side seems to have the most acceptance, and I don’t mean to suggest that this bit of conventional wisdom didn’t come from somewhere. In most cases magnum ammunition in a small revolver is uncontrollable and unnecessarily loud. I tend to come down on this side…mostly. But obviously not completely because I carry magnums, so let’s look at the other side of this coin.

There are also those that completely ignore convention and go the other direction, saying, “in a gunfight, you won’t notice the recoil.”  I find this idea curious. It seems to suggest that the biggest concern is noticing the physical pain imparted by recoil, or the psychological effect produced by the blast and muzzle flash.

On a popular firearms podcast I recently heard one of the hosts idiotically state that he carries full-power, 125-grain .357 Gold Dots in his LCR. These cartridges are on the higher end of the recoil spectrum. In an LCR this recoil is exaggerated, and this round isn’t known for wonderful performance in short barrels, anyway. It’s literally the worst of both worlds. There is also a person in my family who bought his wife an ultra-lightweight revolver. Along with it he bought two boxes of ammunition: one box of light-recoiling .38s, and a box of rip-roarin’ .357. You already know why, right?

I agree that in a life and death struggle, the discomfort imparted through recoil is not the biggest concern. I concede that you might even be able to ignore it. But, I am deeply concerned about ability to deliver rapid, accurate fire beyond that first round. I further believe this ability is impeded to an unacceptable extent by excessive recoil. Does the name on the box of ammo mean that that particular cartridge will produce unacceptable recoil, though?

A few weeks ago I ran the Hardwired Tactical “Super Snubby Test” at the request of Chris Baker. This was his idea, and he had already run through the test with multiple guns and loads. I ran the test once each, with four different loads, then ran them all again with a different gun. Though the test dictates starting from the low-ready at all stages, I shot from concealment at the 10 and 5 yard lines, and from the low ready only at the 3. I am happy to report a passing score with all rounds up to and including my carry load (135 is considered “passing” out of a possible 150). My results are as follows:

*This load is my daily carry load.
**I shot with the 686 only as a comparison.

Now, I don’t think this is the “end all, be all” of shooting tests, but I did glean a couple of things from it. With an all-steel gun there was very little difference with the .38 and .38 +P loads. There was some increase in blast and recoil with the .357 Short Barrel, but not to an unmanageable extent – my times were similar to those recorded for the .38s, and accuracy suffered only slightly.

The 125-grain Remington was a different experience entirely. This load was far more powerful than the others, and is what I imagine most people conjure of when they think of .357 Magnum ammo. The main problem was that the gun physically moved in my hands. After about every other shot I had to adjust my grasp. The recoil had caused the gun to jump “up” in my hand, breaking my firm, two-handed grip. This lack of purchase forced me to reacquire a firing grip before continuing the drill, and slowed my rate of fire. This is NOT the type of thing that you can just ignore, and ignoring the blast and recoil won’t change physics.

The massive movement of the little gun also made it hard to keep the gun on target. Reacquiring the sights (and for this drill sights are a necessity) took time and effort, and even with effort my strings suffered. This round is definitely well above my recoil management threshold. I definitely wouldn’t carry it in my 640. Though I eked out a passing score with the 686, the recoil and blast still made these JSPs less pleasant than the 640 with the Short Barrel Gold Dot.

Firing three strings of this ammunition through my 640 was a chore. My thumb ended up bruised and remained sore for a few days. I don’t rule out the possibility that this is the type of thing one could ignore in a gunfight – it may be possible. Where I could not ignore it is on the practice range. This would necessitate practicing with a round that produces much lighter recoil. I don’t think accustoming oneself to a soft shooting round, the carrying a harder-hitting one is a great idea.

Before answering this question satisfactorily, we have to acknowledge a couple of things. First, there is great deal of disparity in what constitutes “magnum” ammunition. Magnum itself is nothing more than nomenclature – an marketing name from S&W and Winchester. There is no agreed upon definition of what comprises a magnum load or cartridge. Secondly, the guns that fire these cartridges come in a wide array of shapes, sizes, and weights. The third component of this triad is the shooter him- or herself. 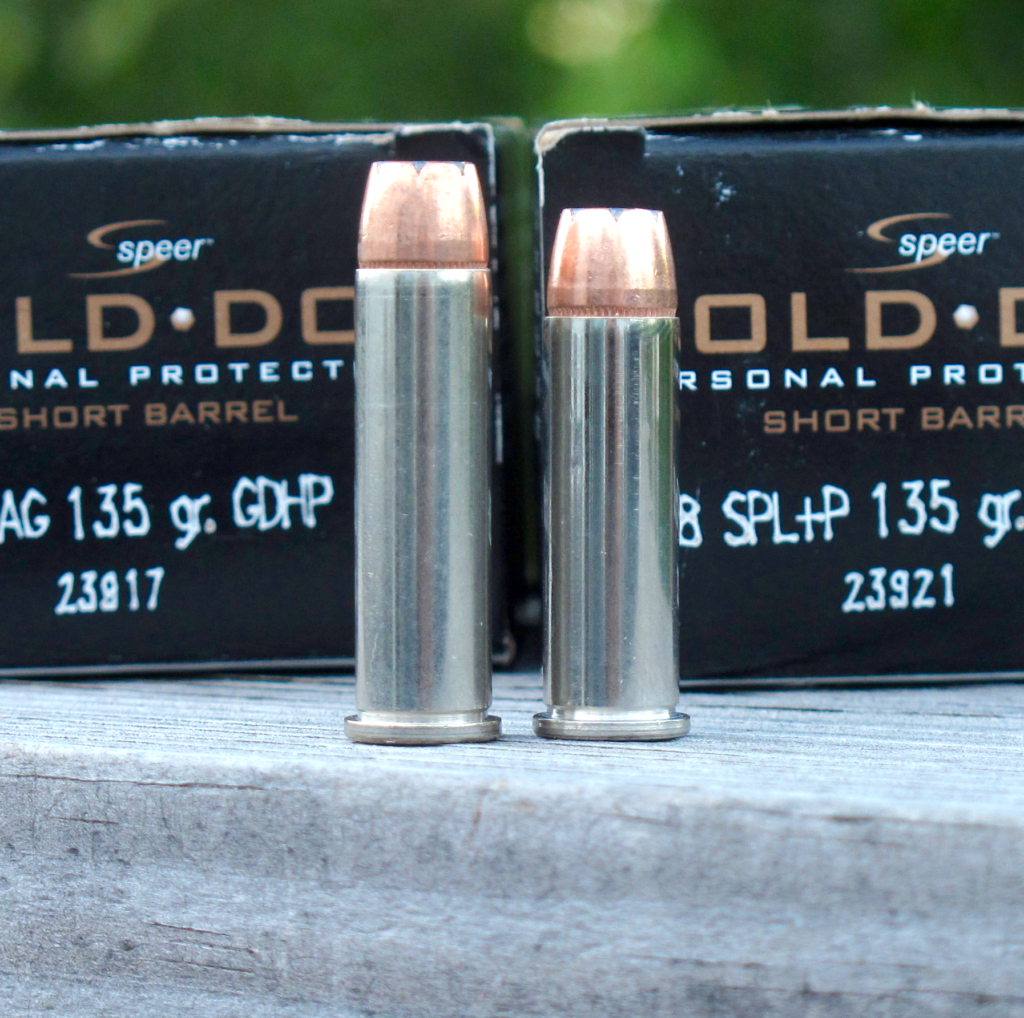 The Ammunition: There are two variables in ammunition that contribute to recoil. First is bullet weight. Conventional, non-exotic bullets for the .357 Magnum are available in a wide range of weighs, from 110- to 200-grains. With all things being equal, a heavier bullet means heavier recoil. Velocity is the next factor to consider. Velocity in factory-produced ammunition may be below 1,100 feet per second (FPS) to over 1,600 FPS, or anywhere in between. Velocity will also be greatly influenced by barrel length.

The Gun: The next factor up for consideration is the gun itself. There is no shortage of sub-factors to consider in this one either, but the chief factors are weight and grip. The heavier the gun is, the more it helps to mitigate recoil. Larger grips also generally help in recoil management by allowing your hands to achieve more surface area and a firmer grasp on the gun. For many “larger” equates to “longer” but I also firmly believe the width of the grips is important. Thicker grips, especially on a J-Frame or equivalent, help to get more of your palms onto the panels.

The Shooter: Finally, there is some consideration for the shooter. I hesitate to point this one out because at one point or another we have all probably held the belief that we are impervious to the effects of recoil. I am slightly embarrassed to admit that I stoked my first J-Frame (a 3″ Model 60) with hot-rod .357 ammo because…well, because I was gifted with the naivete of youth. In any case, a more seasoned, trained shooter may be able to control more recoil effectively than a less experienced shooter.

The combination: Finding the right combination of ammunition, gun, and shooter is imperative. There are many revolvers that I would not wish to charge with the .357 Short Barrel load, and others that I would be comfortable with something a little stiffer. On the other hand, there are those who would be best served with milder .38s, even in a big gun like my 686. Finding a workable combination requires some due diligence, and some honestly with oneself. 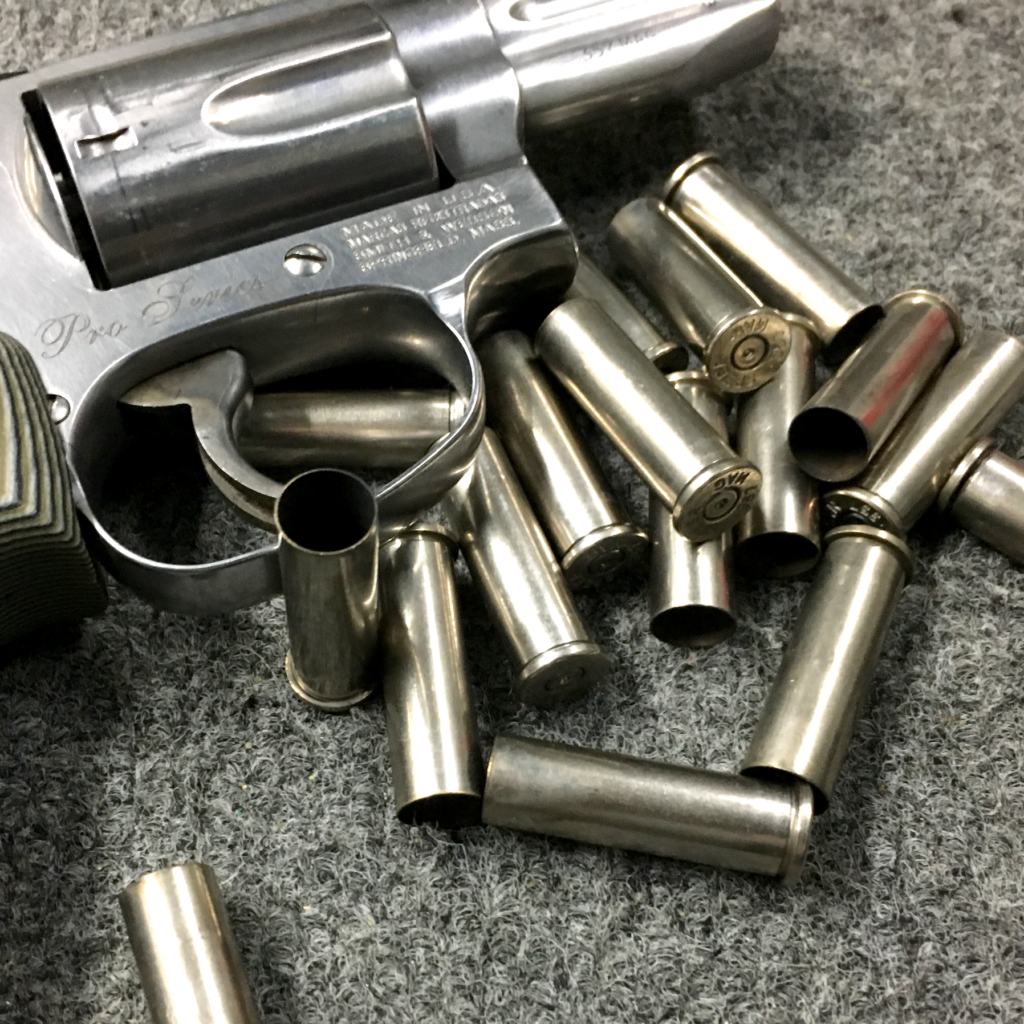 Bottom line: bullet performance will probably have little effect in a fight, relative to your performance behind the gun. Telling the casual shooter to go with .38s is sound advice, as he or she probably has a lot of other things to worry about first. However, if you’re reading this blog, I assume you are a little more serious about revolvers than most. This is a nuanced question and I think it deserves a nuanced answer for those of us with the interest to pursue it.

If a couple of practical factors were different I might go with even lighter-recoiling ammo. My personal bottom line is: I can control this to an acceptable degree of speed and accuracy, I already own a ton of .357 Short Barrel Gold Dots, and it seems to perform well from both 2″ and 4″ barrels, covering all the revolvers I own. By extension it should also do well in a 3″ gun, should the day come when I can afford one.

There are several .357 Magnum loads, including the Winchester PDX1 and the Remington Golden Saber that expand and penetrate well while falling on the lighter side of the recoil curve. Don’t judge a cartridge by its headstamp. Shoot it and find out where your recoil threshold is – the point where speed and accuracy start to suffer to a point that any benefits of using the hotter round are negated.

Ultimately, it’s not the words stamped on the case that make a cartridge hard to handle. Likewise, it’s also not the “MAG” headstamp that ends fights, either. It is some combination of the stuff inside the case, the gun the case is shoved into, and the person firing it. It’s a complicated cocktail and it’s up to you to mix your own.