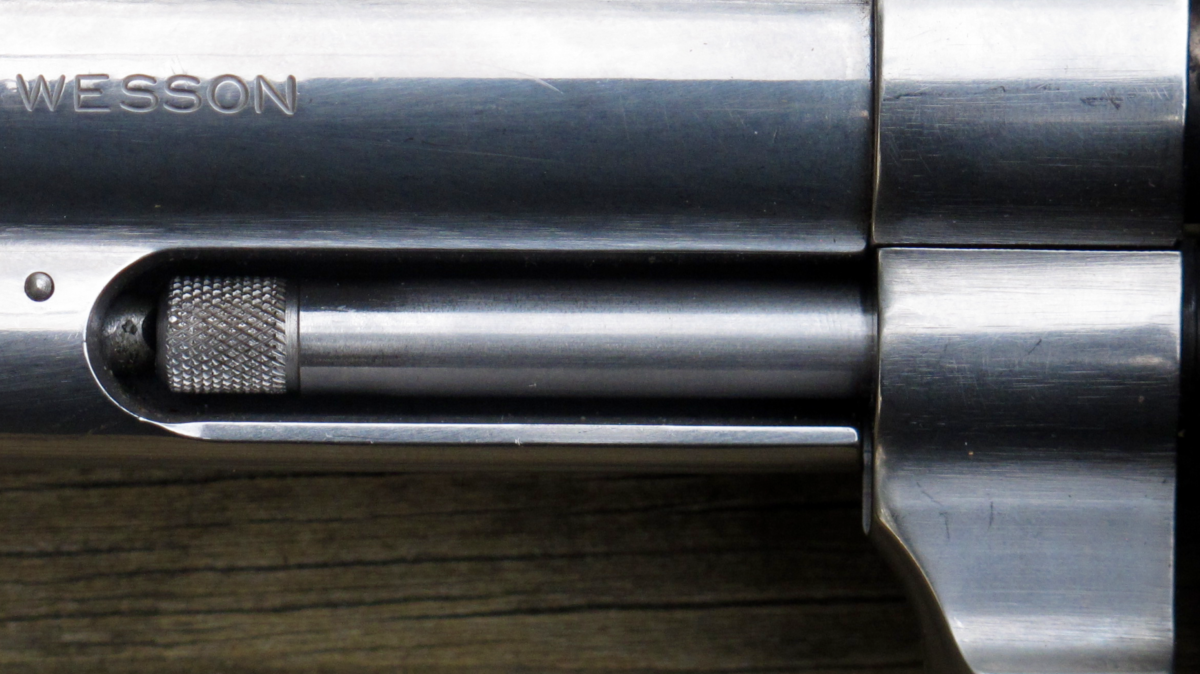 Last weekend I drove out to an old military buddy’s house. He has a multi-acre yard with his own range and I was looking forward to clanging some steel. We set up the range, I loaded up, and began with six shots at his dueling tree. As soon as I hit the sixth plate I brought the gun back to my workspace to conduct a universal revolver reload. Something was wrong. The middle and ring fingers of my support hand could barely budge the cylinder open. I put a little “oomph” into it and the gun popped open, but I knew I had a problem. In a first for me, I had just experienced a backed-out ejector rod malfunction.

Note, 01/26/2018: Grant Cunningham recently linked to this post. He helpfully also added a few comments. Since Grant is a world-class revolver gunsmith, you should probably take his word before you take mine. You can find this thoughts at http://www.grantcunningham.com/2018/01/hump-day-reading-list-january-24-2018/.

Not knowing any better I didn’t immediately recognize this malfunction for what it was and take appropriate corrective action. I thought it might have been the ammunition (Perfecta .357), so I inspected the brass. All looked good – no bulged primers. Next, I looked under the extractor star, only to find it clean as a whistle. Lacking the imagination to diagnose this issue I loaded six more rounds and knocked the dueling tree plates around the other way. Bad idea.

After that second six the cylinder was stuck, but much more firmly this time. It took a couple good smacks with the heel of my hand to release it from the frame. “What the heck is going on with my prized 686?” I wondered. Rather than obsess about it I grabbed my friend’s spare Glock 19 and enjoyed the rest of the afternoon… but not before sending a rather melancholy email to Mr. Mike Wood, bemoaning the fate of my beloved pre-lock sixgun. Fortunately, Mike diagnosed the problem (and turned my mood around)  almost immediately!

I didn’t have a whole lot of warning before the backed-out ejector rod bound up my gun. My 686 was extremely clean. I had recently detail-cleaned and function-checked it. I had fired it only a week prior, and I had been using it earlier in the day to take some photos. Loading and unloading the cylinder during the photo shoot had revealed nothing amiss. Only after firing six rounds did I see the indicators of a worsening issue. 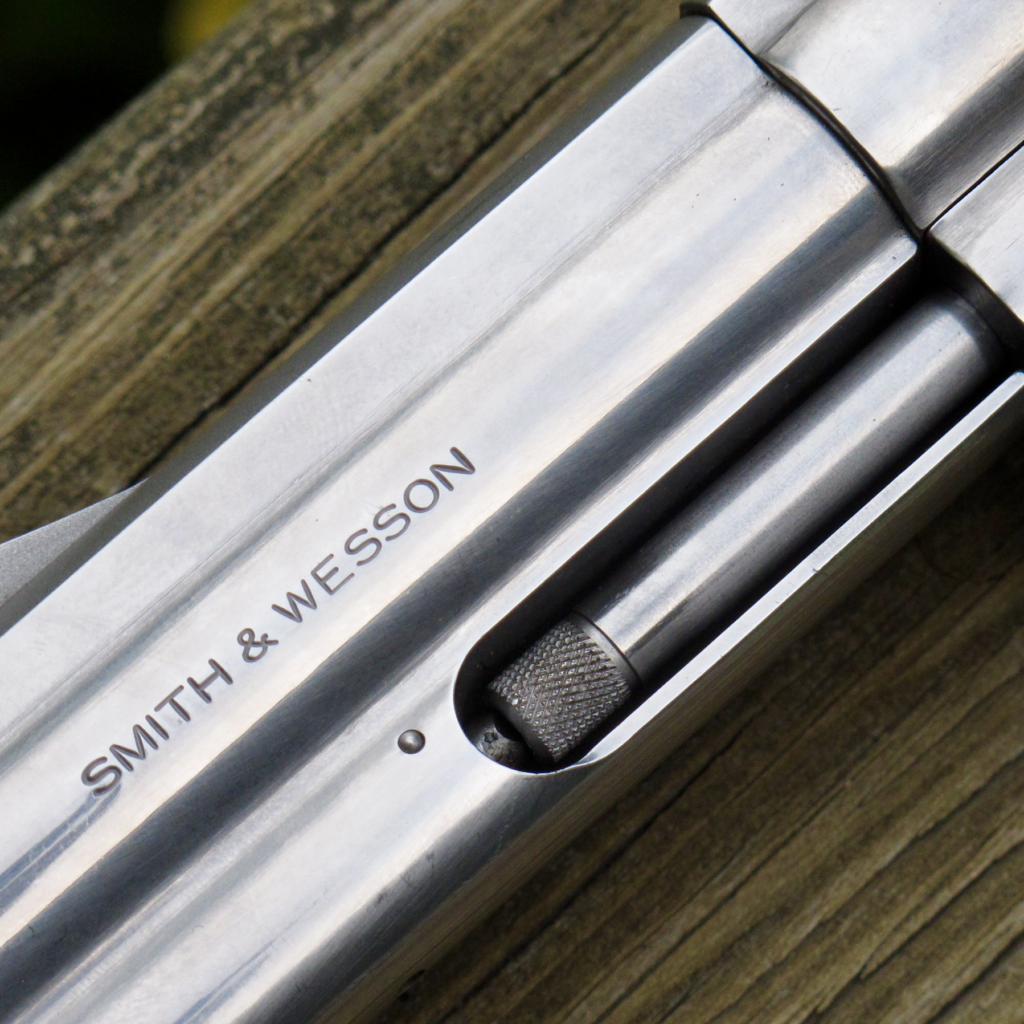 The only indicator I had for this malfunction was the first sticky cylinder opening. Being so used to reloading the revolver normally, this was enough to throw me off my cycle and confuse me. This is not what I would want to happen during a defensive encounter. From now on checking the tightness of the ejector rod will be a step in my regular inspection process.

At this point we should cover some safety stuff. Freeing the cylinder stop MAY require partially cycling the action by slightly pulling the hammer – or trigger – back (it was necessary in my case). It also may not. Try to shim the cylinder stop by inserting a thin piece of material between it and the cylinder. A business card works great for this purpose. If there is not enough clearance for the shim, or if the cylinder bolt just keeps chewing up the business card (as was my experience) follow the instructions below:

IF THE CYLINDER CONTAINS LIVE AMMUNITION, USE EXTREME CAUTION! FIRST, MAKE SURE YOU HAVE EYE- AND EAR-PROTECTION ON. ENSURE THE FIREARM IS POINTED IN A SAFE DIRECTION AND ALL OF YOUR BODY PARTS (AND THOSE OF FRIENDS, FAMILY, BYSTANDERS, NEIGHBORS, AND PETS) ARE CLEAR OF THE MUZZLE. NEXT, CONTROL THE HAMMER, IF YOUR REVOLVER HAS ONE THAT IS EXPOSED. IF YOUR REVOLVER DOES NOT HAVE AN EXPOSED HAMMER, CONTROL THE CYLINDER, AND RELEASE THE TRIGGER AS SOON AS THE CYLINDER IS FREED.

Once the cylinder is freed, insert a shim between the cylinder and the cylinder bolt. This will allow the cylinder to spin freely. Once you can turn the cylinder, you have to arrest the ejector rod. This is best done with a non-marring instrument. I have found that a No. 2 Pencil eraser works pretty well for this task. If you are using a S&W revolver manufactured after 1961, the thread on the ejector rod is a left-hand (reverse) thread, so keep this in mind. Figuring out which way to turn things can be the trickiest part of the whole operation. 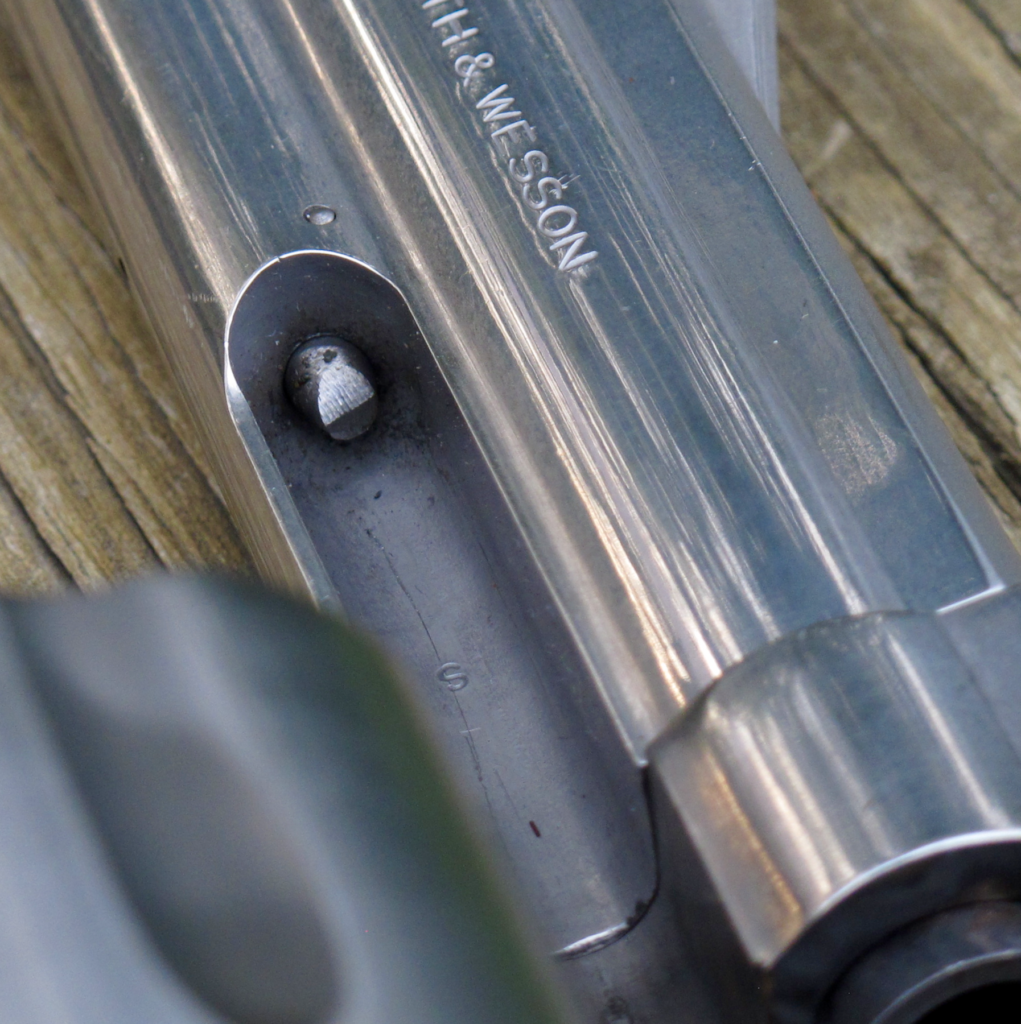 Fixing this issue is relatively painless if you can get the cylinder open. Once you have it open, remove any live ammunition. Reinsert at least a couple of pieces of brass to support the extractor star when you apply torsion. This isn’t strictly necessary, but I’ve heard it recommended frequently, and I can’t think of a good reason not to do it. 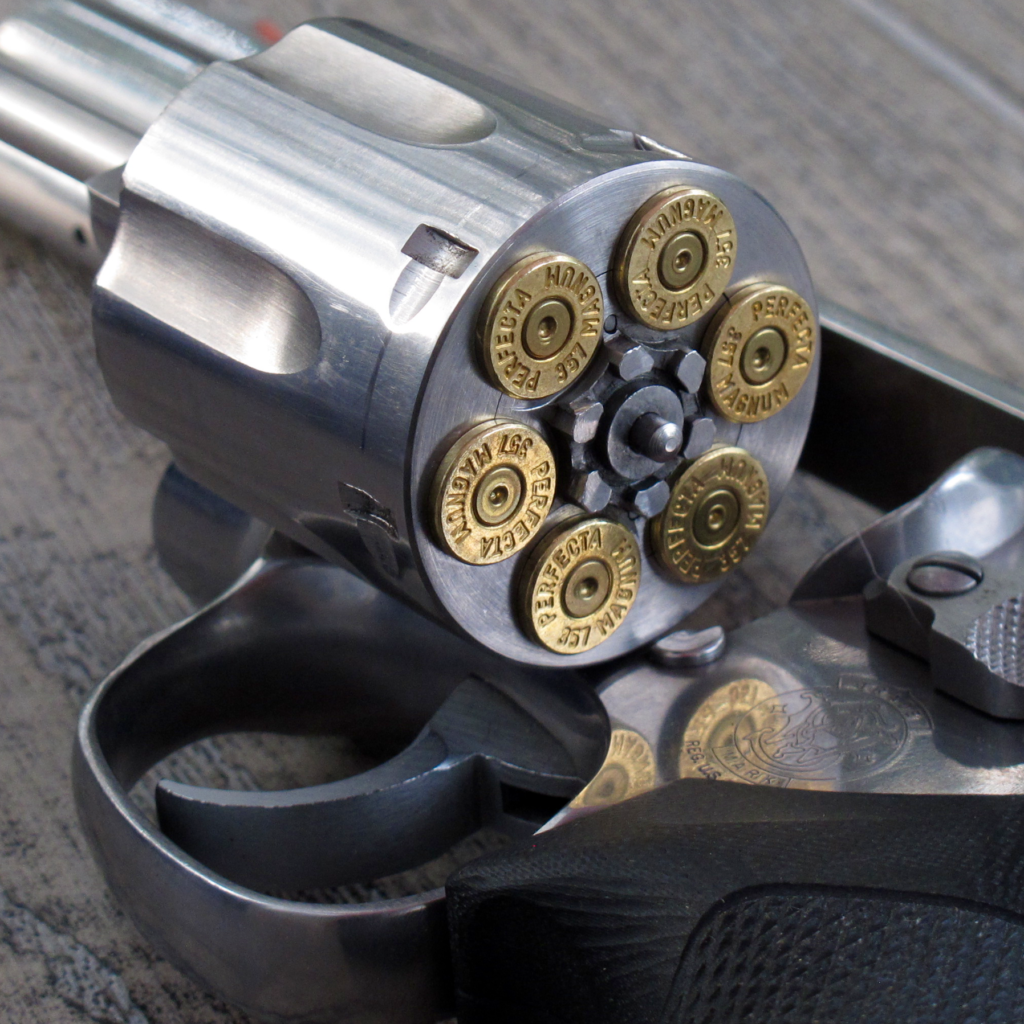 Next, you will need some pliers to tighten the ejector rod. You will want to pad the jaws of the pliers for two purposes. The first is to prevent scratching the ejector rod. The second is to provide a natural “clutch” that will slip and prevent you from overtightening and stripping the fine threads of the rod. Though most forums and blog posts recommend leather, I didn’t have a scrap piece of leather on hand. I found that the cuff of a flannel shirt worked just fine. 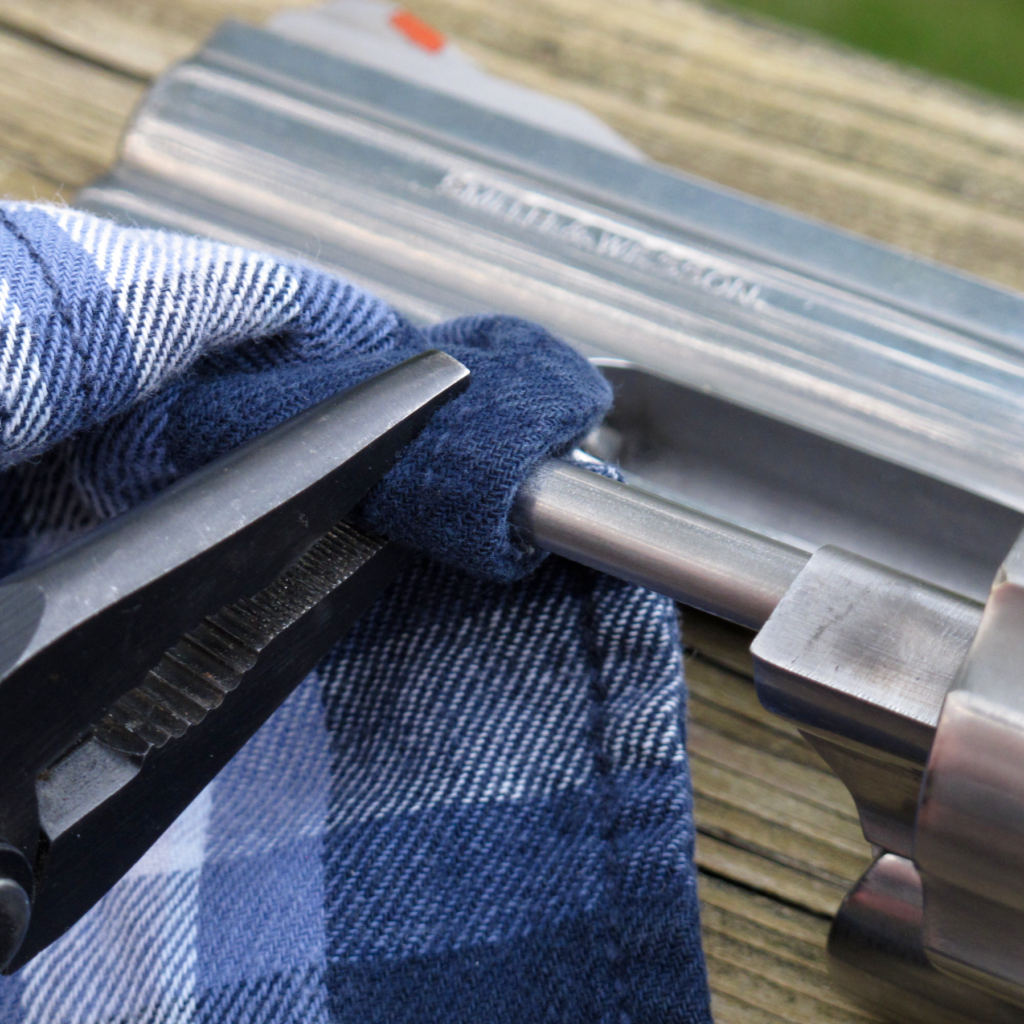 Though a lot of people have said that “revolvers don’t malfunction” or “all you have to do [if your revolver malfunctions] is pull the trigger again,” there is another, smaller group of writes that says if your revolver goes down, it’s probably going to take tools to fix it. Guess which camp I fall into? Revolvers malfunction – there’s no getting around it. The best we can do is inspect our guns regularly for proper fit and function of all these critical parts.

The ejector rod is not one of the “cool” parts of the revolver. My eye isn’t usually drawn to it when I’m checking out a new wheelgun. But it is a critical component. As you’re doing your weekly inspection of your carry gear, take that extra couple of seconds to make sure it’s tight. It almost always will be, but if it’s ever loose you’ll thank yourself.