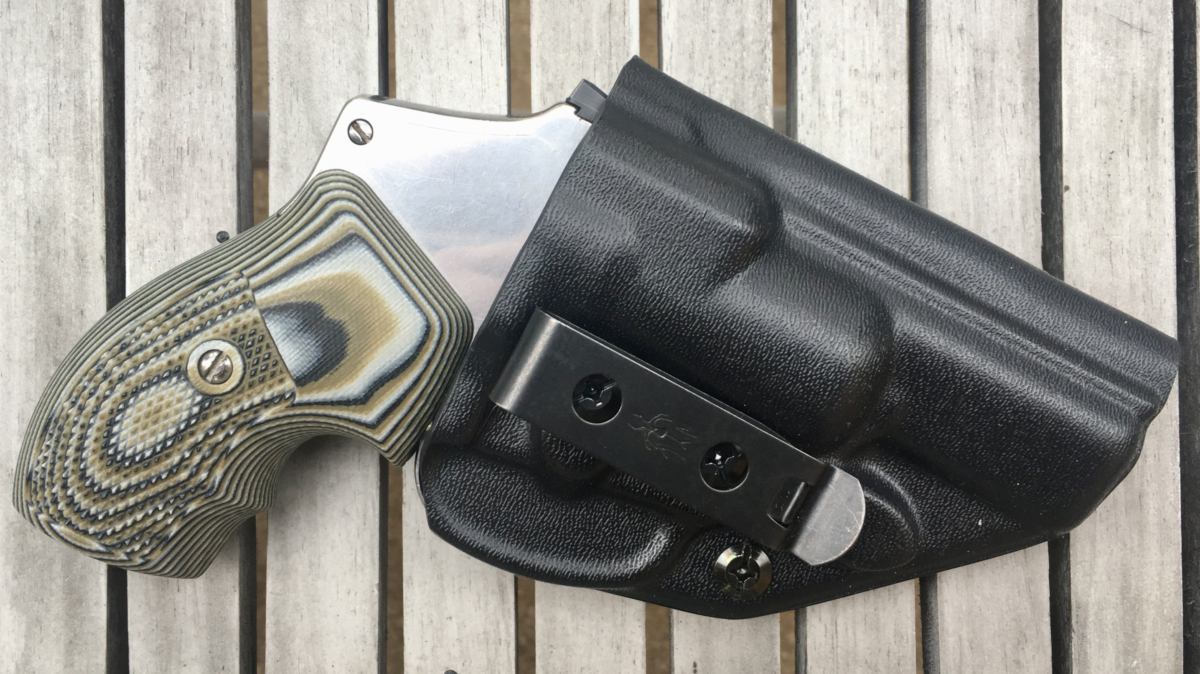 Though (as you guys know) I’m carrying a slab-sided bottom feeder on a daily basis, I haven’t completely ditched my J-Frame. The  640 Pro gets pulled for those times when I must be 100% positive that my gun concealed. The holster it has been riding in is one I’ve yet to mention here: the Harry’s Holsters Icon J-Frame holster.

Recently Harrison Jones, the owner of Harry’s Holsters reached out and asked if I’d review this piece of Kydex. I agreed, and as soon as I pulled his Kydex out of the package I knew this was going to be a worthwhile addition to my carry options.

The Harry’s Holsters Icon is what I’d call a “minimalist” holster design. It conspicuously lacks any superfluous material and fits my little 640 like a glove. While many holsters (especially AIWB holsters) seemed to be designed longer than they truly need to be, this one isn’t. It’s just big enough to fit the 2 1/8th” barrel, and fit it perfectly. If you’re packing a stubbier version of the 640 you might notice a tad bit of extra space, but there won’t be much. 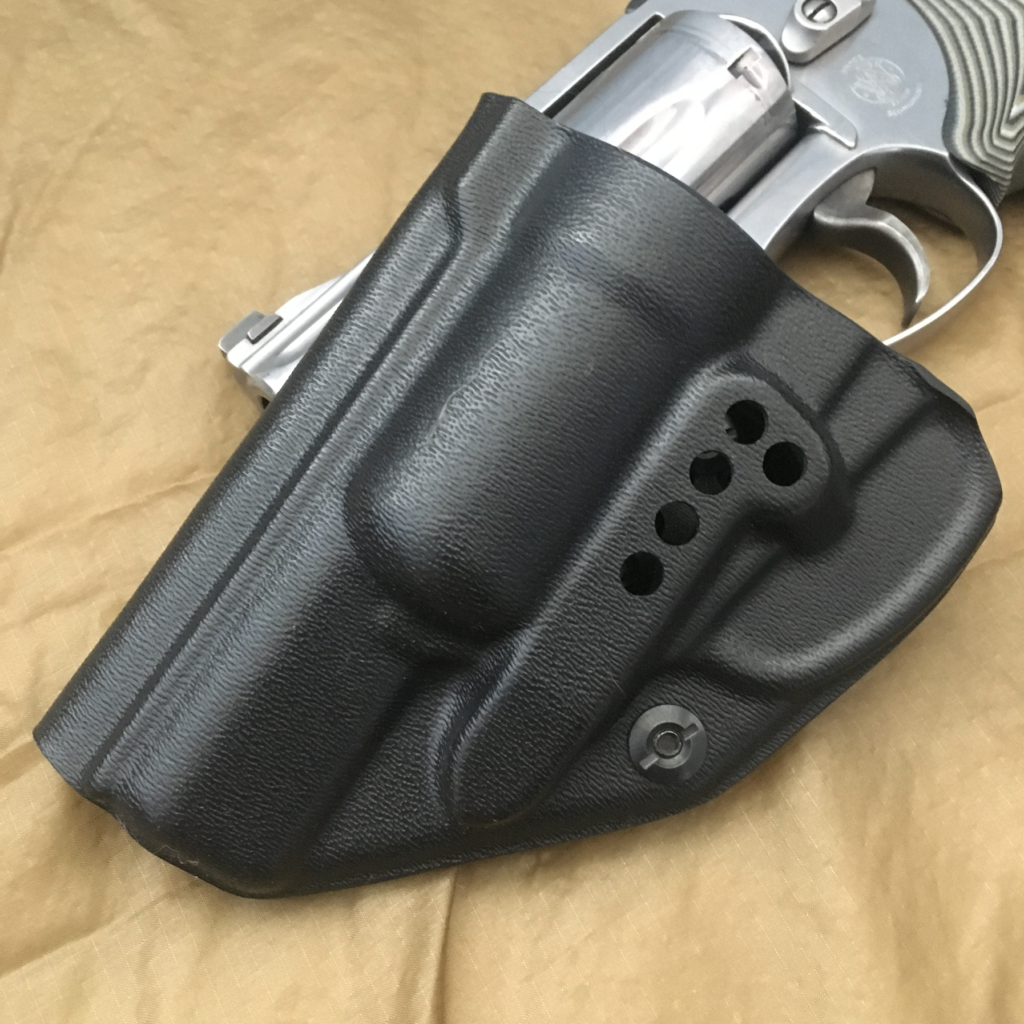 As soon as I took the Harry’s Holsters Icon out of the package my first thought was, “wow, this thing is light!” I contacted Harrison Jones of Harry’s Holsters to ask if this was an exceptionally thin Kydex. As it turns out, at a nominal 0.08″ it’s not, but it may seem that way for a couple of reasons. First, as I mentioned earlier, there isn’t any extra material adding to the weight. Another factor contributing to the illusion that this is a very thin holster is how well-finished all the edges are. They are finely beveled and expertly finished.

The Icon is molded tightly to the gun, which can cause secondary problems in some designs. The sharp angle created by the leading edge of a revolver’s cylinder can cause a sharp area on a holster that can be quite uncomfortable. The Harry’s Holsters Icon doesn’t suffer this fate; the area surrounding the forward edge of the cylinder is sculpted into a comfortable, rounded profile. The entire outer surface of this rig is smooth and rounded; there isn’t a sharp edge to be found.

The Harry’s Holster Icon has a single belt clip rather than loops. The Icon’s clip, the Discrete Carry Concepts Mod W, is a spring steel clip. It boasts a nice under-hook which prevents the clip from coming off unless you want it to come off. The hook is also reversible, making this holster appropriate for right- and left-handed shooters. I’m usually not a fan of “convertible” holsters but this one actually works. 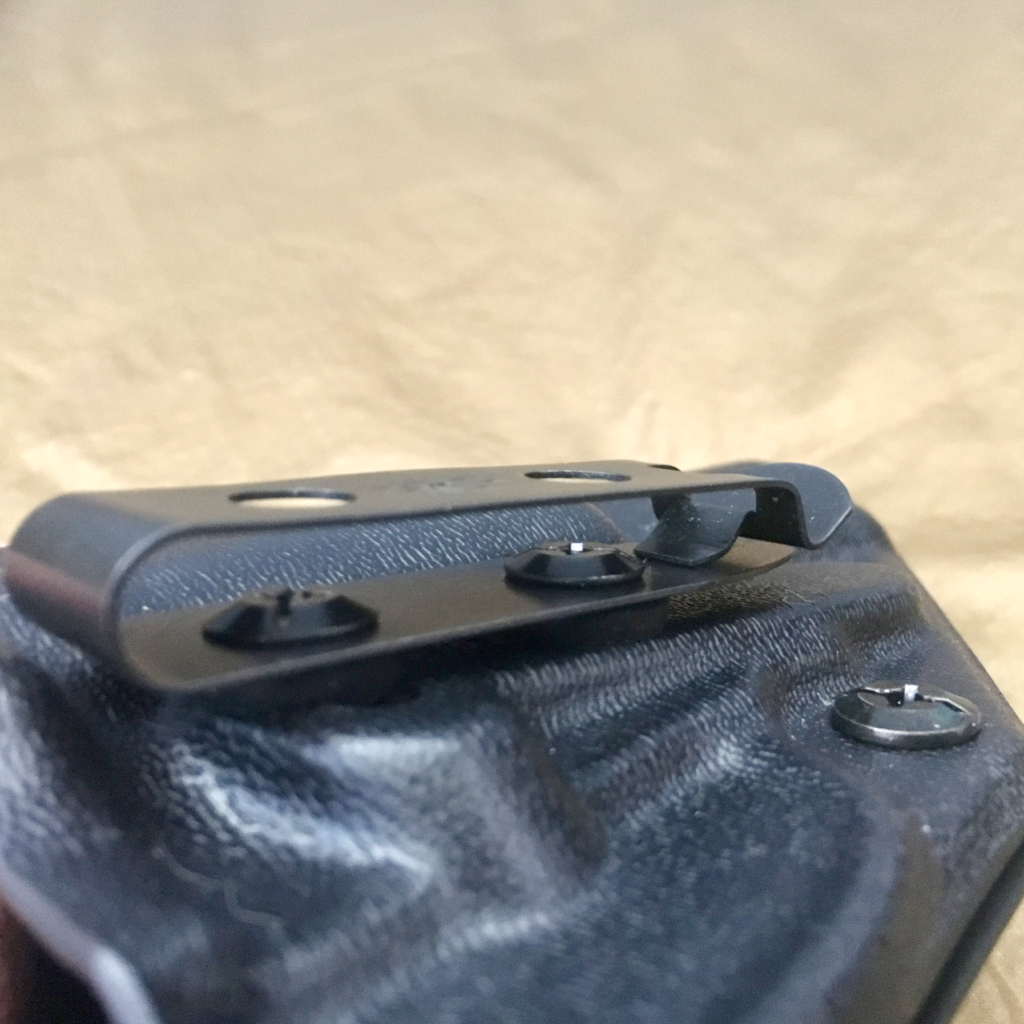 Finally, the Icon features a single tension screw. If found this required a little tightening initially to give me an audible and tactile “click” when the gun locks into the holster. I tightened this to the point that I could invert the holster without the revolver falling out. This offers all the retention I desired in a concealed rig while still permitting a smooth draw.

There have been several occasions in the past couple of months where wearing the 640 has been necessary because of my environment. I instruct for a living, which means standing in front of people, pretty much all day. Some of my audiences wouldn’t care if I open-carried (which I don’t). Some of my audiences would be aghast if they became aware that a gun was anywhere near them. With these groups I need completely assurance that my gun isn’t going to show.

Since getting the Icon, I’ve had quite a few occasions to wear my 640 in front of audiences of the latter persuasion. First and foremost, it hides my hardware very well. The gun disappears under anything, all the way down to a tightly-fitting t-shirt. I’ve yet to think twice about whether or not I’m printing with the 640/Icon combo. Secondly, it is comfortable. The minimalist design and melted edges make this one of the least bothersome holsters I’ve carried in awhile. I’ve been using it in the appendix position and really appreciate this factor. 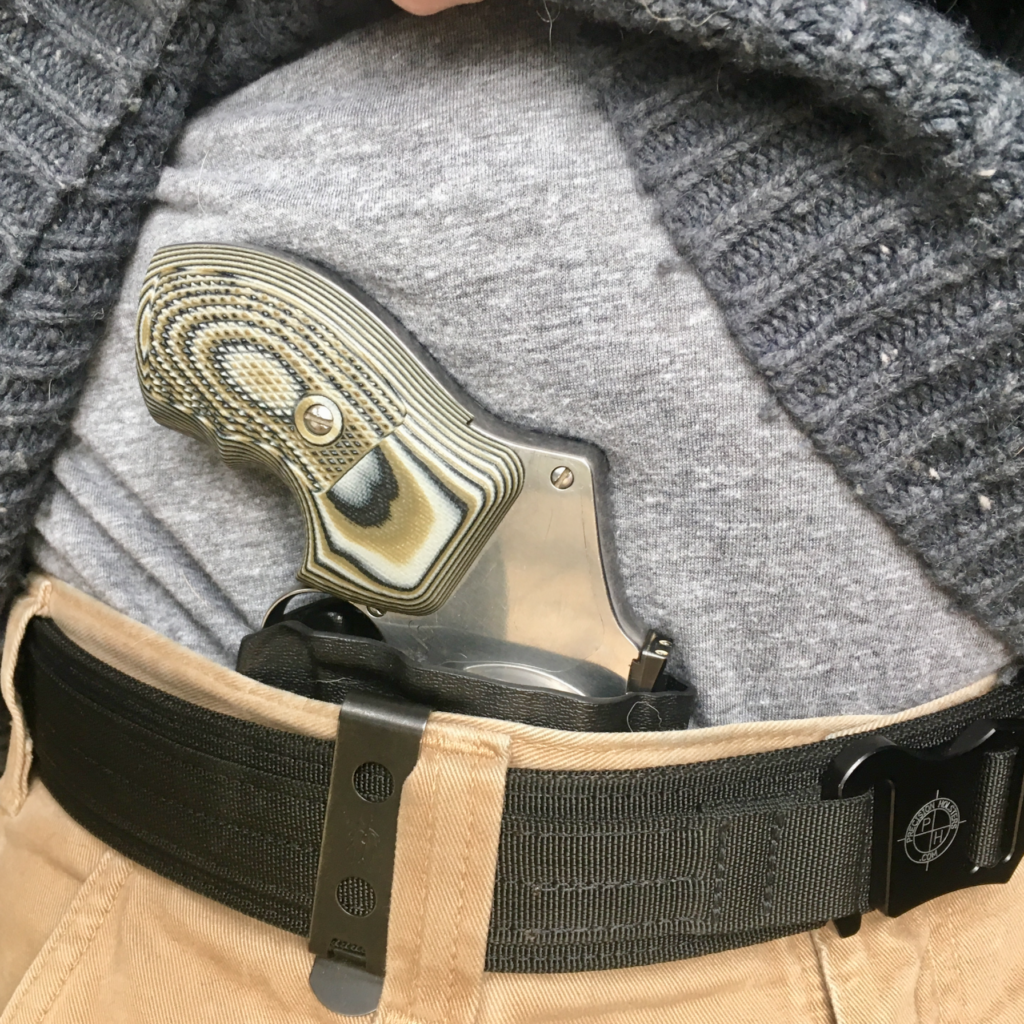 If there’s one complaint about the Icon it’s the single clip. This can cause the holster to cant when I sit down. This pushes the butt of my revolver out and reduces its concealability somewhat. This isn’t a major issue but it does require me to adjust the gun slightly upon standing up. This may be a necessary evil on a holster this compact; adding another clip (or a wider one) would increase the overall size of the holster somewhat. I’m not sure the trade off would be worth it.

Harry’s Holsters provides a “No Nonsense Warranty” that I really appreciate it. So much so, I’ll post it, in it’s entirety here:

Harry’s Holsters No Nonsense Warranty is all about the most important person, you the customer!  We will repair or replace your Harry’s Holsters  in the event it becomes damaged or defective—at no charge to you. If your product cannot be repaired, we’ll replace it with a product in perfect working order of equal or better physical condition.

It doesn’t matter how it happened, whose fault it was, or where you purchased it. You can count on the No Nonsense Warranty for all your holster needs.

The No Nonsense Warranty does not cover loss, theft, deliberate damage or cosmetic damage that does not hinder the performance of the product.

Warranty does not cover normal wear.

This is an extremely well-crafted, minimalist holster. If you’re looking for a deep concealment rig for your J-Frame, check it out. Though currently the Harry’s Holster Icon is only available for up to 2.125″ J-Frames, I’ve talked to Harrison and he tells me that he is working on a Gen 2 model. The future version should support some other firearms including both the 2- and 3-inch Ruger LCRs and 3-inch S&W J-Frames.

You can order the Harry’s Holsters Icon as a “quick ship” option for $49.99, but it only comes in basic black (that’s my preference, anyhow). For a slight upcharge you can have it in any of a huge array of colors including four shades of brown, Tiffany Blue, Zombie Green, and half a dozen variants of Kryptek camo.