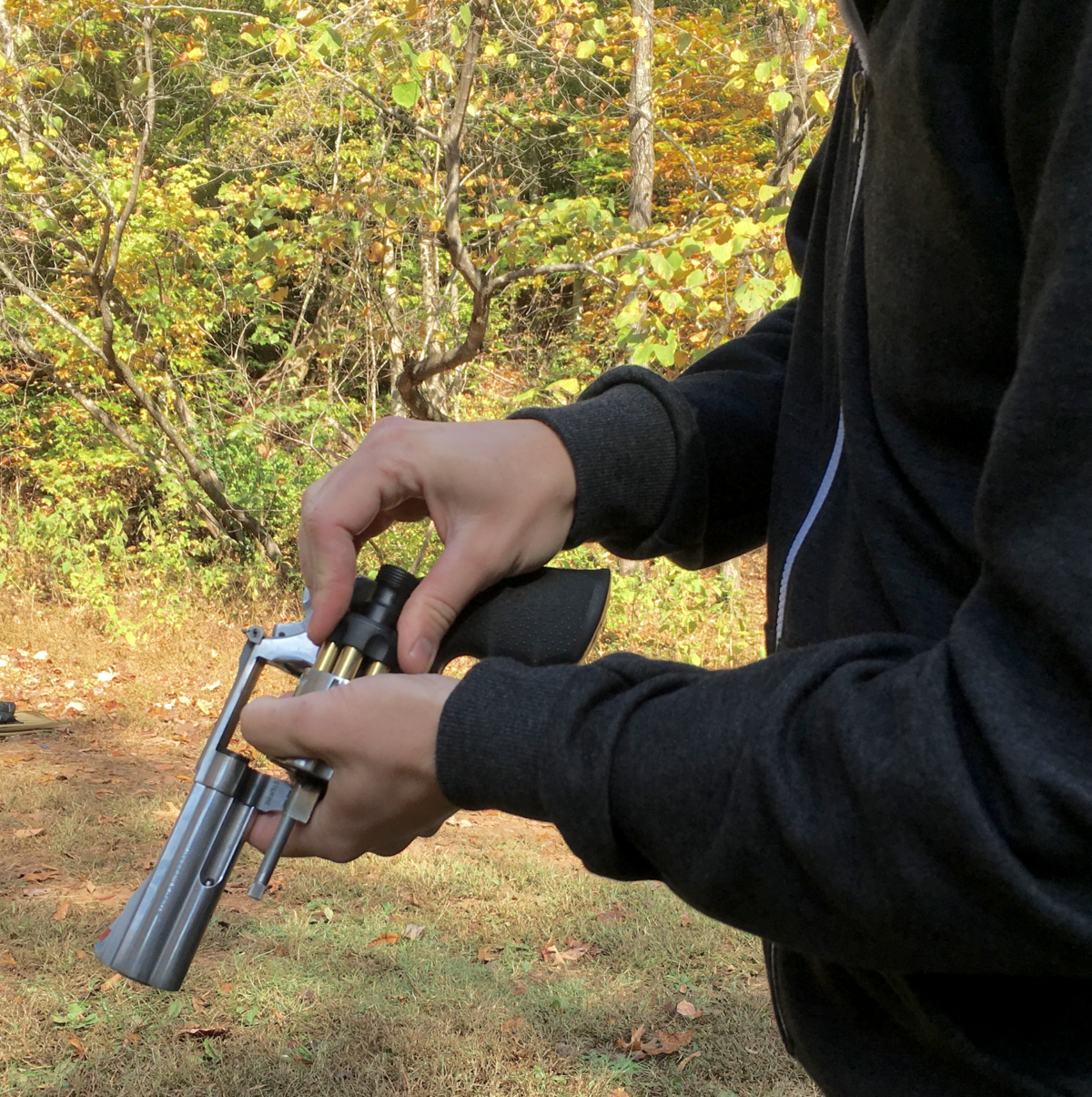 To misquote Jerry Miculek, “your revolver is always empty during a match.” Because revolvers only typically hold 5-6 rounds they require a lot more reloading than semi-autos do. Exacerbating this situation, revolver reloads are pretty complicated. This post is going to be the first in a series on focusing on the detailed technical aspects of revolver reload.

I am not going to go over the basic mechanics of revolver reloads. I feel that this ground has been sufficiently covered elsewhere and I would have little to offer. Chris Baker released an excellent video a couple of years ago that explains how to reload a revolver. This is where I initially learned to reload a wheelgun, and this is a really good starting point.

Of the various methods Chris discusses, my favorite is the Universal Revolver Reload. I feel that this method is the most robust and the one most likely to succeed under extreme stress. Regardless of which you choose, you should pick one and stick with it until you can perform it reliably. And speaking of…one great thing about revolvers is they give you tons of opportunity to practice reloading. Stop reloading from a box of ammo on the bench. Learn one of these techniques and use it EVERY TIME you load or reload your revolver.

There are several ancillary factors that can influence your success with revolver reloads. Since this series is going to be a very detailed examination of some of these factors, I am going to begin with some really nuanced stuff. Hang in there if you really want to geek out on some revolver stuff!

This may seem counterintuitive because revolvers aren’t supposed to suffer from ammunition sensitivity…right? That’s mostly right, but when it comes to getting cartidges into the chamber in a hurry, things get a just a little more complicated. I’m not going to get into reliability, bullet effectiveness, muzzle flash, or recoil in this post. Instead I want to focus solely on the two factors that influence getting those round pegs into round holes.

The first ammunition selection criteria is bullet shape. An overly boxy bullet will be slower and more difficult to get into the chambers. This is especially true when aligning multiple cartidges via speedloader. If the cartidges are even slightly mis-aligned, the severe angles will hang up on the edges of the cylinders. You should also think about this when buying practice ammunition. Don’t practice exlusively with ammunition that flows really smoothly into the chamber, and then carry something that doesn’t. Nate over at Priority: Performance has a really good post about this.

You should also think about case construction. I greatly prefer nickel-plated cases over standard brass-cased ammo†. Nickel-plated cases are “slicker” than standard uncoated brass and tend to slip into (and out of) the chambers a tad easier. This is especially true when considering mildly corroded rounds. Plain brass cases corrode like crazy when handled daily and carried in a pocket. This makes them even more likely to hang up in the cylinder and is another reason I choose carry ammunition with a nickel-plated case. This isn’t a massive factor, (maybe 1% of the big picture) but it is one more slight advantage in your favor.

I’m not going to tell you what ammunition to use defensively, but I will tell you what I carry: Speer 135-grain Gold Dot Short Barrel hollow points.

This kind of busts another myth. You know, the one about revolvers not needing maintenance? With a couple of exceptions, most of the reloading devices I will mention below are going to totally rely on gravity to get the rounds into the chambers. This is a problem if the cylinders are excessively dirty. If you shoot your revolver much you have probaby noticed this during practice sessions. After even a modest round count, rounds may stop seating on their own. It only takes one round protruding from its chamber to prevent the cylinder from shutting. 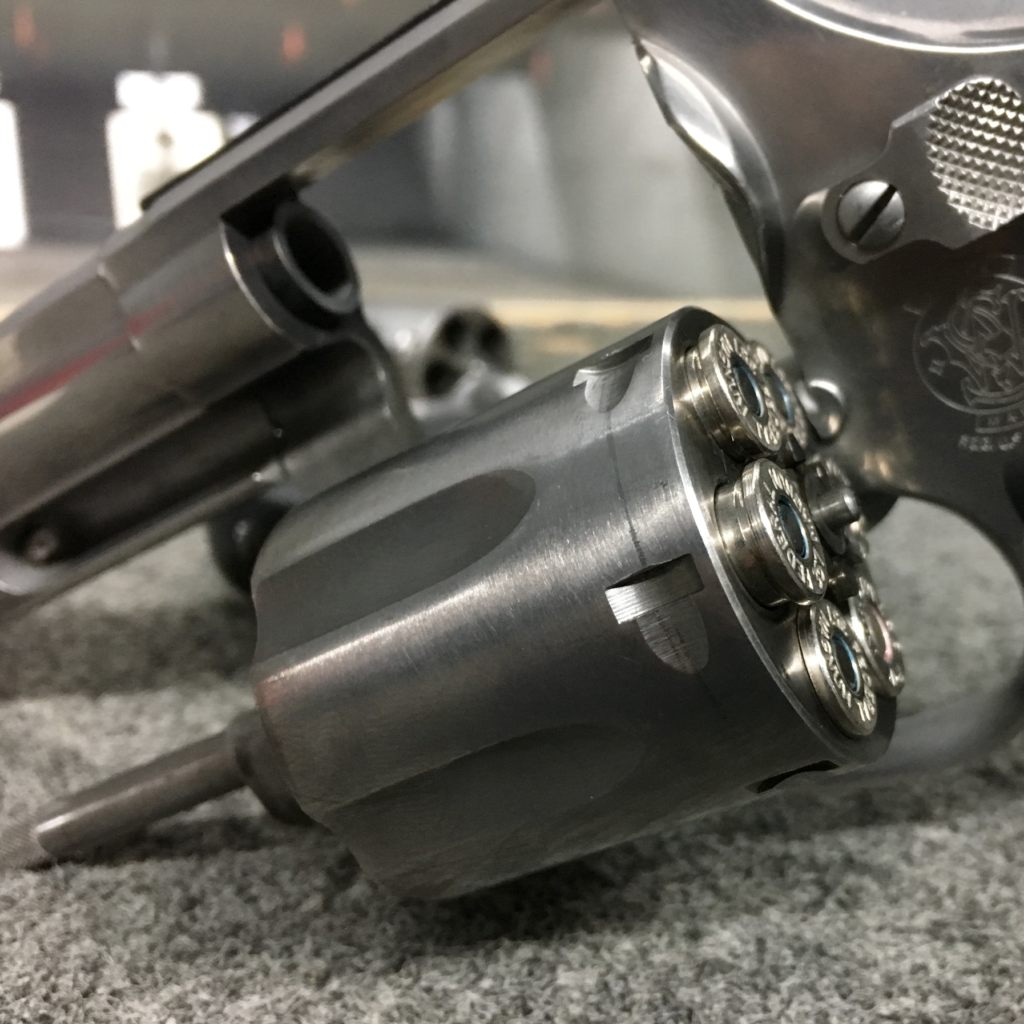 The best thing you can do to prevent this is to clean the each chamber really well after every range session. I have found .40 caliber brushes and Hoppe’s #9 to be best for this task. If you carry .357 Magnum ammo, you may also want to practice with .357 rounds. The carbon ring left behind by .38 Special ammo can prevent the longer Magnum rounds from dropping in. If you’re desperate, you can also try polishing the chambers. I am really hesitant to recommend this though, because of the risks of overdoing it.

This is where things really get tricky. Unlike, say, a Glock 19, I can’t just tell you to “go buy a speedloader and a good pouch for it.” Finding the right combination involves a lot of factors that interplay with each other. The availability of some reloaders like the S.L. Variant is really limited. Some speedloaders may not work with certain grips installed. You also might want to carry your speedloaders in a pouch, and pouches are not “universal fit”. 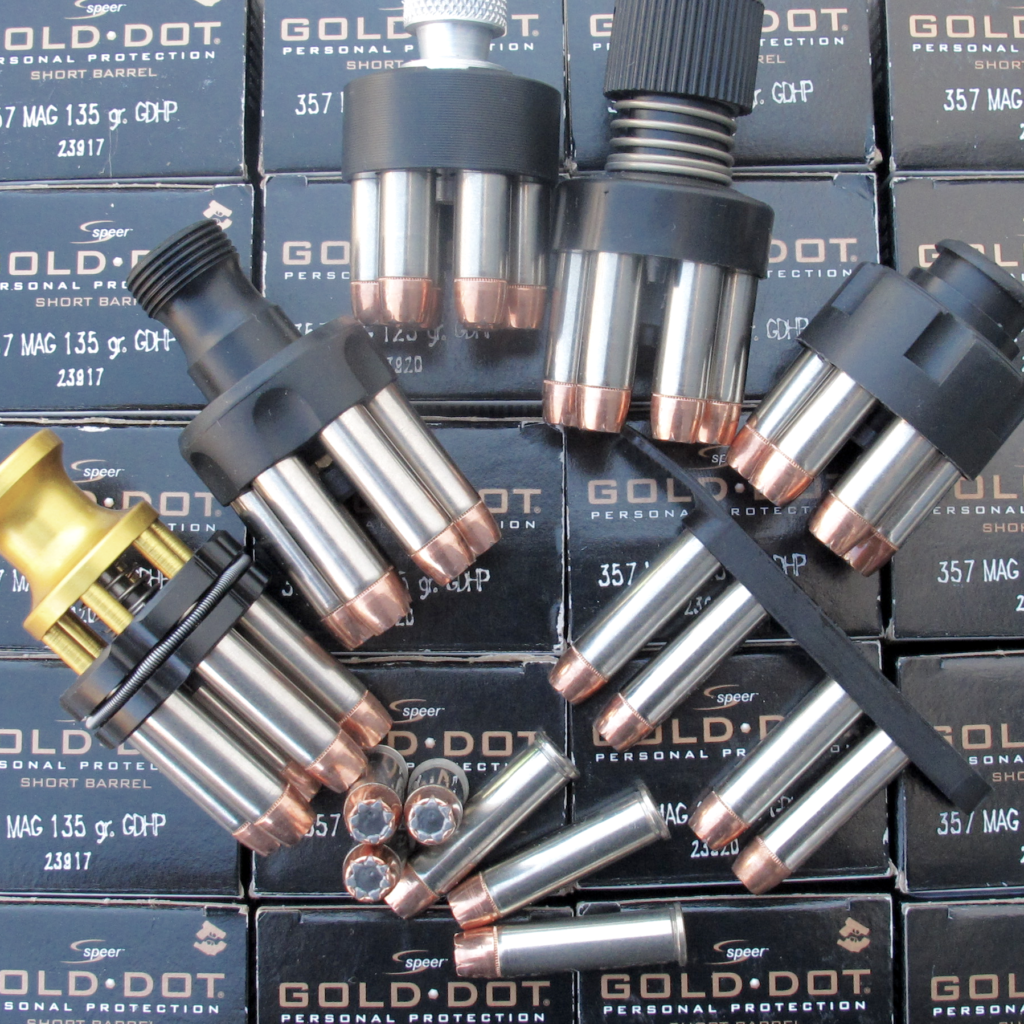 Finding a good speed-reload setup for a revolver is a process of finding the right combination for you. It means finding the right speedloader, the right pouch, and the right ammunition. Over the next few weeks I will be working on giving you my assessment of as many speedloaders as I can get my hands on. I will also begin reviewing some speedloader pouches to hopefully help you make a better decision.

†I realize this is in conflict with Michael de Bethencourt’s guidance to use plain brass ammunition. He is referring to loading individual rounds by hand, in which case the smoothness of the rounds is a disadvantage.

4 thoughts on “An Introduction to Revolver Reloads”