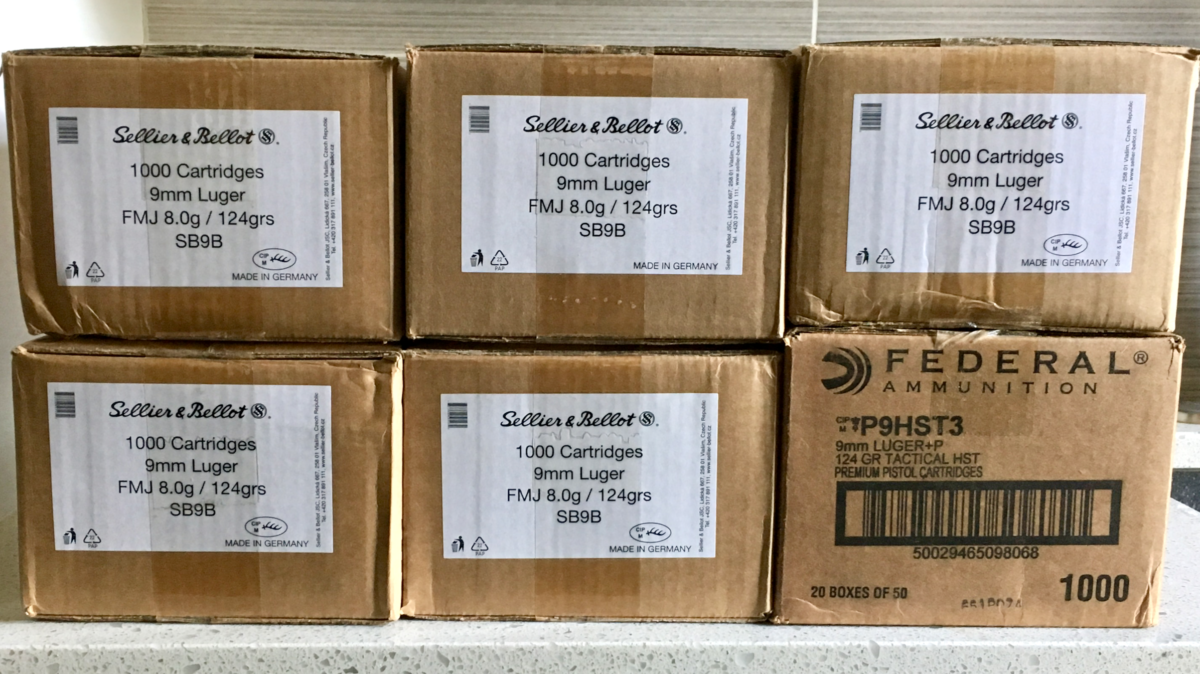 I have always been the guy that keeps just a little ammo on hand and buys more as he shoots it. Until a couple of years ago, that is. During the last election cycle (and during most of President Obama’s administration) ammo was expensive. At times it was ridiculously expensive. Some ammo – especially defensive ammo – was extremely hard to find. This made me realize I needed to maintain a decent ammo inventory.

I realize that not everyone can afford a case of ammo a month (or whatever). Then again… I see those same gun owners who can suddenly afford to pay jacked up prices when election time rolls around. There aren’t going to be any magic solutions in this post. More than anything I hope this is a nudge to those of you that don’t maintain much ammo. Don’t be that guy. Panic now while demand is low supply is high, and prices are dirt cheap!

Why Should You Maintain an Ammo Inventory?

The most important reason, for me, is insulation from cost fluctuations. Ammunition is very price-sensitive and I don’t have unlimited money. However, I like to continue my regular range trips regardless of where the political winds may blow. For the last couple of years I’ve focused heavily on putting back some ammo against hard times. I hope to accumulate enough ammo that at the next “shortage” I won’t feel like I have to hawk my house to buy a couple boxes. This will enable me to continue shooting the same rounds on about the same budget.

There are also some more theoretical reasons to maintain an ammo inventory. You may be concerned about tightening restrictions, an outright ban, or unaffordable excise taxes on ammunition. You may be a prepper who is concerned with a total unavailability of ammunition because of declining social conditions. Whatever your particular reason, you should build an ammo inventory rather than buying just what you’re going to shoot today. Your budget will dictate how big your ammo inventory is, and how fast you build it.

This one is simple: buy a little more than you shoot. If your average range session is 100 rounds, stretch a bit and buy 150 each time you head out. It will accumulate a little more slowly, but it will add up. If you hit the range once a month, by the end of a year you’ve accumulated an extra six months’ worth of ammunition. The biggest benefit to this strategy is that it lets you lay in some extra ammunition immediately. Another benefit is that it doesn’t require a big up-front expense.

There are some obvious downsides to this strategy. The first is cost. Buying ammunition (or anything else) at retail prices incurs a markup. Though it hurts less in the moment, it adds up. The second disadvantage is time. If you want a stockpile of ammo NOW, this isn’t going to do the trick.

Buying in bulk has a ton of advantages. The biggest and most obvious is price. You can usually pick up cases of handgun ammunition for somewhere between 2/3s and 3/4s of retail price. This results in massive savings, and more ammo. Secondly, it lets you build a solid ammo inventory really quickly. It also lets you lay in a lot of ammo that you like. Found that perfect defensive load? If you can find a case of it, you don’t have to worry about defense ammo for the rest of your life.

Downsides to buying in bulk? The most obvious is the upfront cost. A case of .357 or .38 will cost you somewhere north of $300. This is still way cheaper than buying it at retail, but that’s a lot of scratch for many of us.

How much Do You Need

I can’t answer this question for you. I have a number for every caliber I maintain. That number is based on how much I shoot that caliber, and how hard it may be to find that ammunition in the future. For example:

Defensive/Hunting Ammo: I carry the Federal 124-grain +P HST. Since specific premium defensive and/or hunting loads can become scarce and I won’t carry anything I haven’t tested, I want a supply of this. So I purchased a case when I happened to find it. It was expensive, but it’s an investment; I won’t have to buy defensive 9mm ammo again. Ever. And I don’t have to worry about reliability-testing another type of ammo.

Training/Practice Ammo: This really depends on how much you shoot. I would recommend taking an honest look at how much ammo you shoot per year, and attempt to accumulate that much. That’s just my opinion; I know one RevolverGuy writer who has more ammo than he can shoot in a lifetime. On the other hand I know plenty of guys that own about enough for their next range trip. This is also dependent on the particular gun; I shoot handguns much more than rifles, so that is where focus my effort (and dollars).

Again, there are no magic solutions in this post. And I’m probably not telling anyone here anything they don’t know. What I hope I’m doing is making you think about building an ammo inventory NOW. We have about two years before the next election cycle begins in earnest. Regardless of who is in it or who is forecast to win, there will probably be another run on ammo. Don’t be the grasshopper. It won’t go bad and you will eventually use it, so pay as little as you can for it. Panic now, and start building your ammo inventory!