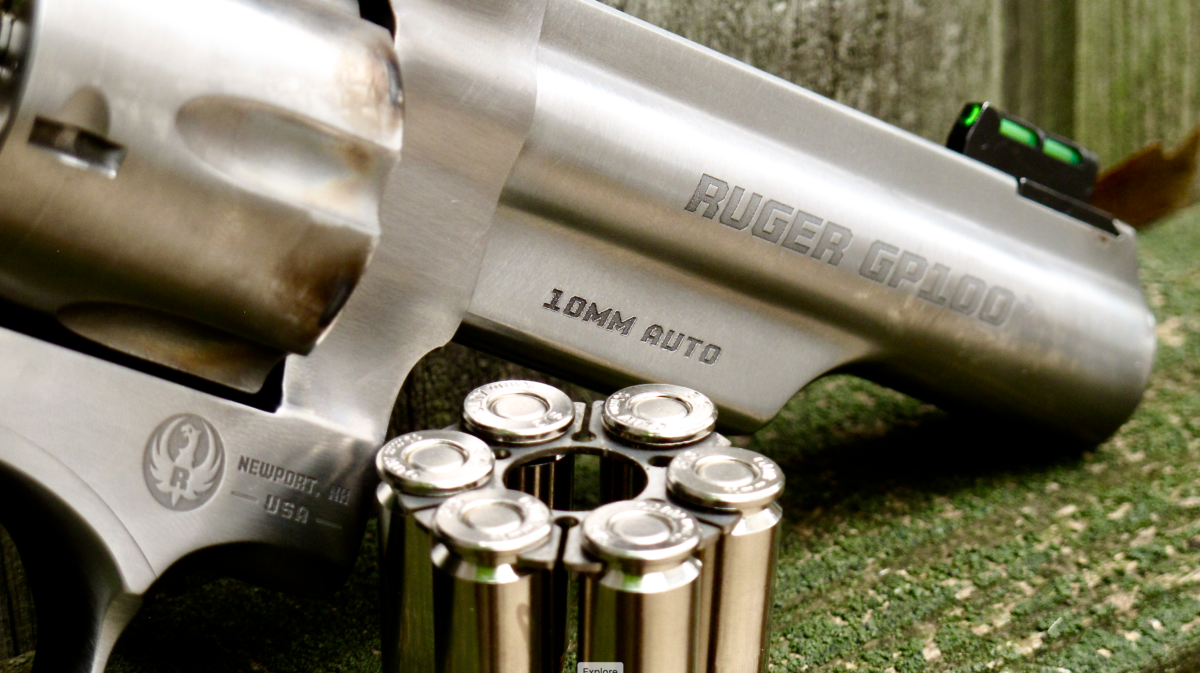 Despite my recent daily-carry conversion, I love revolvers. I also think revolvers chambered for rimless pistol cartridges are downright neat. And, it just so happens, I am a long-time fan of the 10mm Auto. So it was no surprise that I almost jumped out of my seat when I opened an email from Mike containing a press release from Ruger. The Ruger 10mm GP100 Match Champion had just been released! Barely ninety seconds passed before I emailed my contact at Ruger…

The Ruger GP100 has gradually been working its way to the forefront of my revolver consciousness. Since starting this blog I’ve moved from thinking of the GP100 as an “also ran” to viewing it as the best duty-sized revolver on the market. I’ll go one further and say that if I were looking to replace my gun to ride the river with, it would probably be with a Ruger. The release of the 10mm GP100 has me more excited than ever about Ruger’s flagship revolver. 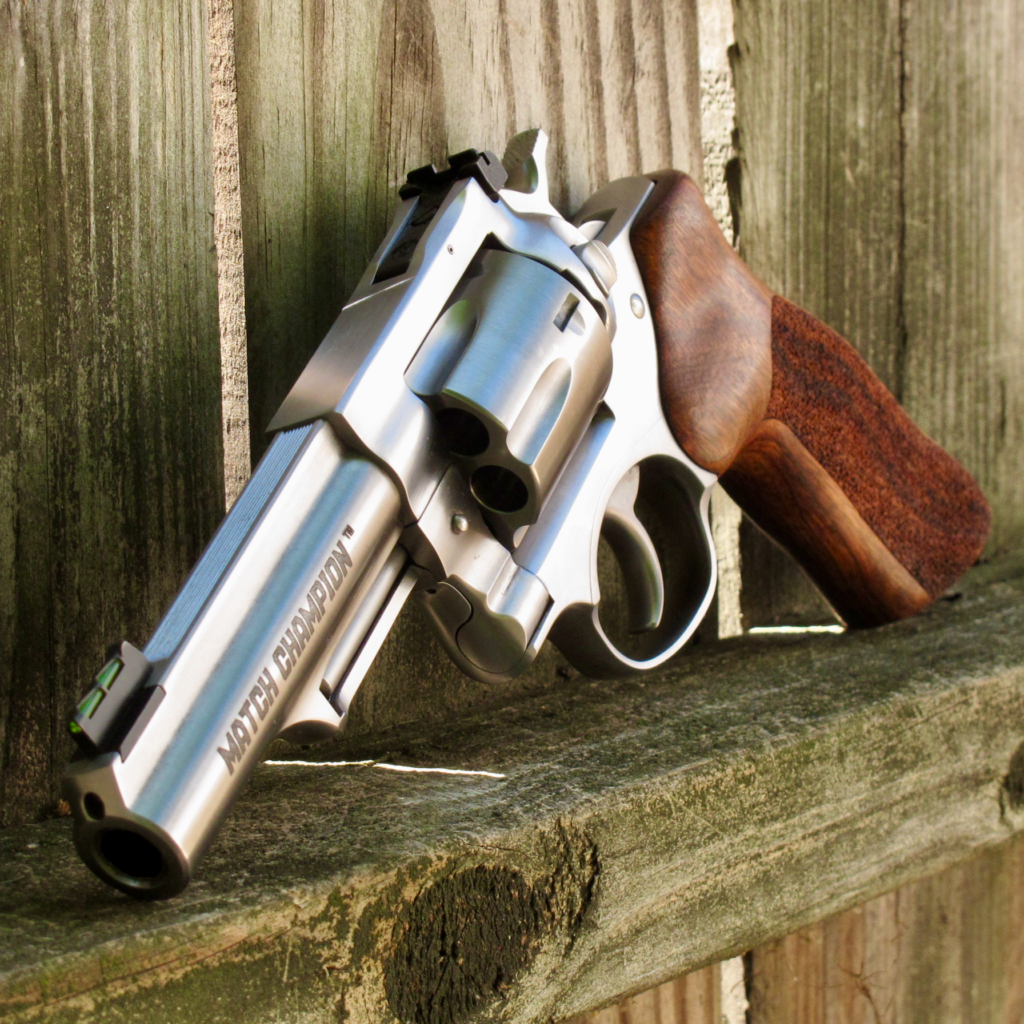 The Ruger 10mm GP100 begins with the usual Match Champion touches.  It is built in all stainless and sports a 4.2″ barrel with a half-lug and a recessed muzzle crown. The grips are the same excellent grips worn by the other Match Champion models. The sights are a fiber optic front and an adjustable rear blade. Obviously it is chambered in 10mm Auto, and this is where things start to get interesting. 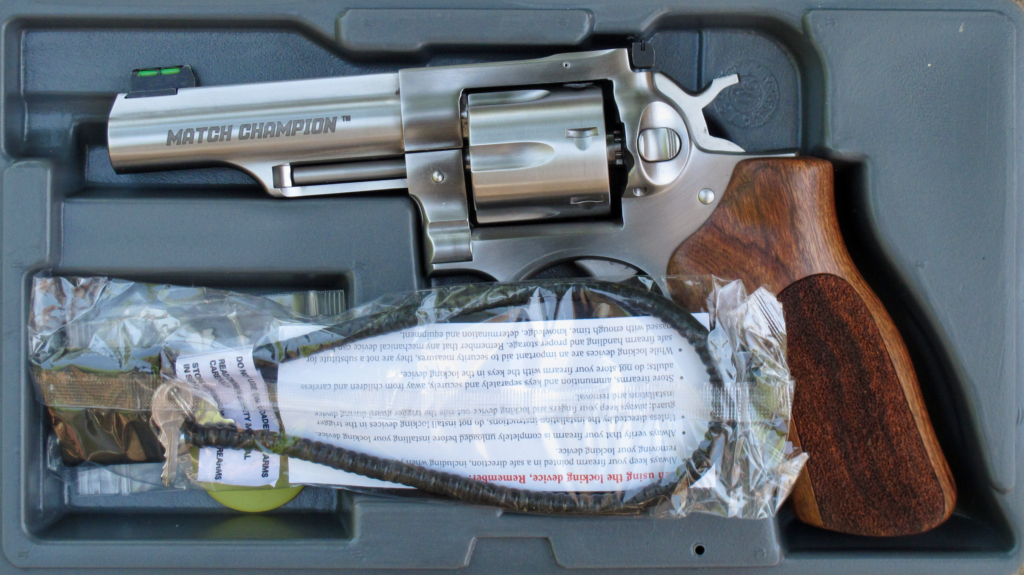 The 10mm GP100 Match Champion chambers six rounds of 10mm in a medium-large frame revolver. I admit no small amount of surprise when I realized what Ruger had managed to pull off here. In the past Smith & Wesson has manufactured a couple of 10mm revolvers: the 610 (which I have owned) and the 310 Night Guard. These six-shooters are built on Smith’s large N-Frame. Ruger put six into an L-Frame-class revolver. That alone impressed me! 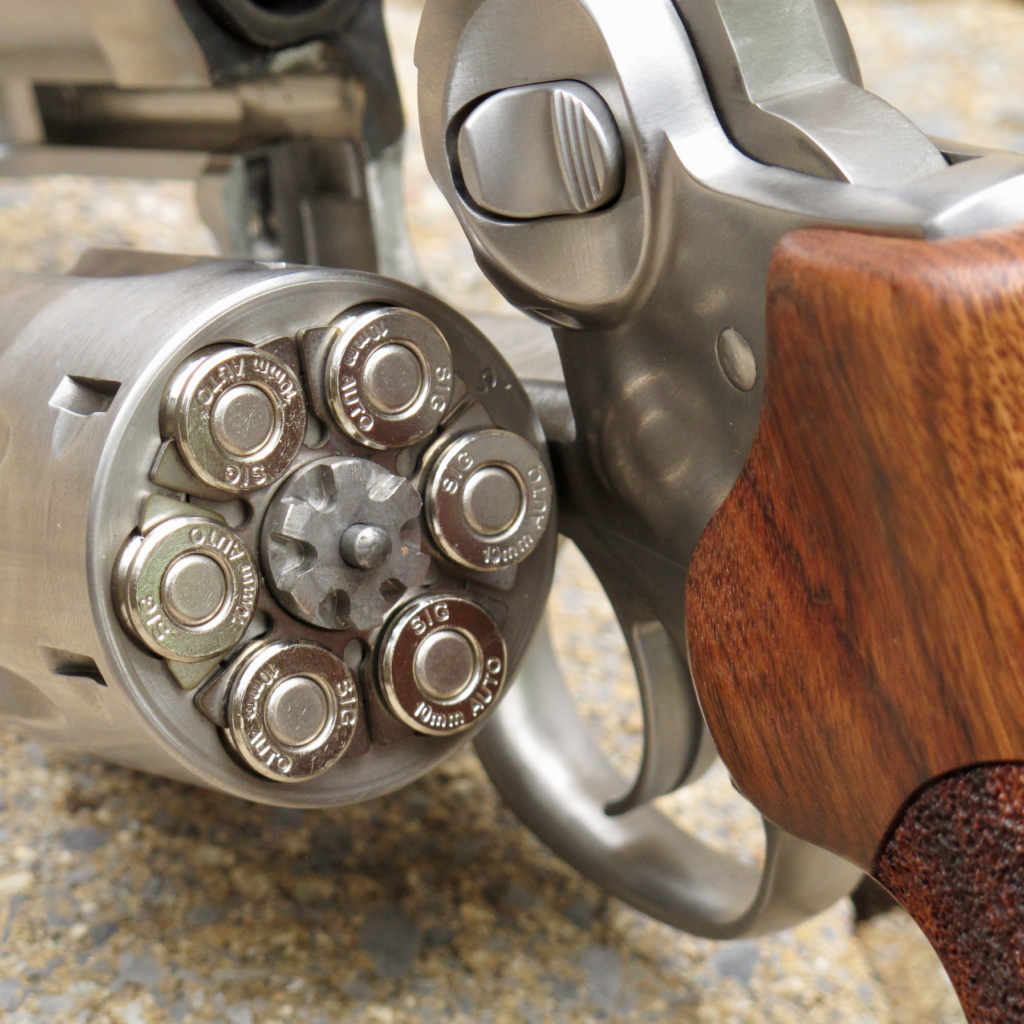 The last Ruger product I spent significant time with was the .357 Magnum Match Champion. Naturally this invites a bit of comparison between the two. I encourage you to go back and read that review to get a feel for my history with the GP100-series. The Ruger 10mm GP100 has several big differences from the .357 model. I’m happy to report that almost every change I have noticed is a correction of something I had previously been unhappy about. I doubt Ruger was reading RevolverGuy for design tips, but regardless I’m happy to see some issues corrected!

My biggest concern with the .357 version was the rear sight pin that kept walking out. Many of you reported similar issues with your Rugers.  The Ruger 10mm GP100 has a roll pin holding the rear sight assembly on rather than a simple friction-fit pin. I am surprised that I’ve yet to see another reviewer comment on this important change. I hope the roll pin finds its way into other revolvers in the GP100 lineup. I have not fired this gun enough to ascertain its effectiveness, but I will let you know what happens.

As you may remember, I wasn’t thrilled with the front sight on the .357 Magnum Match Champion. The front sight on that version featured a very large, melted fiber dot. This made it hard to take precision shots. The front-sight blade on the Ruger 10mm GP100 is drastically different. First and most importantly, the dot is recessed into the blade. This creates a somewhat more refined sight picture. I like this sight much better than the original. Personally though, I still find the fiber optic distracting and will still consider replacement with a gold bead. The other change with the front sight is the the protective shrouding over the fiber optic rod. It is still there, but in a much more visually interesting arrangement.

The most visually obvious change to the Ruger 10mm Match Champion is the barrel. Rather than the slab-sided barrel with flats milled on each side, the .40 caliber tube is round. This is probably a necessity; milling the same flats on the barrel would probably have made it too thin for the larger bore diameter. Another change necessitated by the bigger 10mm Auto cartridge: the cylinder is not tapered. All of these changes are fine with me. I find this revolver more visually appealing than the somewhat radical-looking .357 Match Champion. 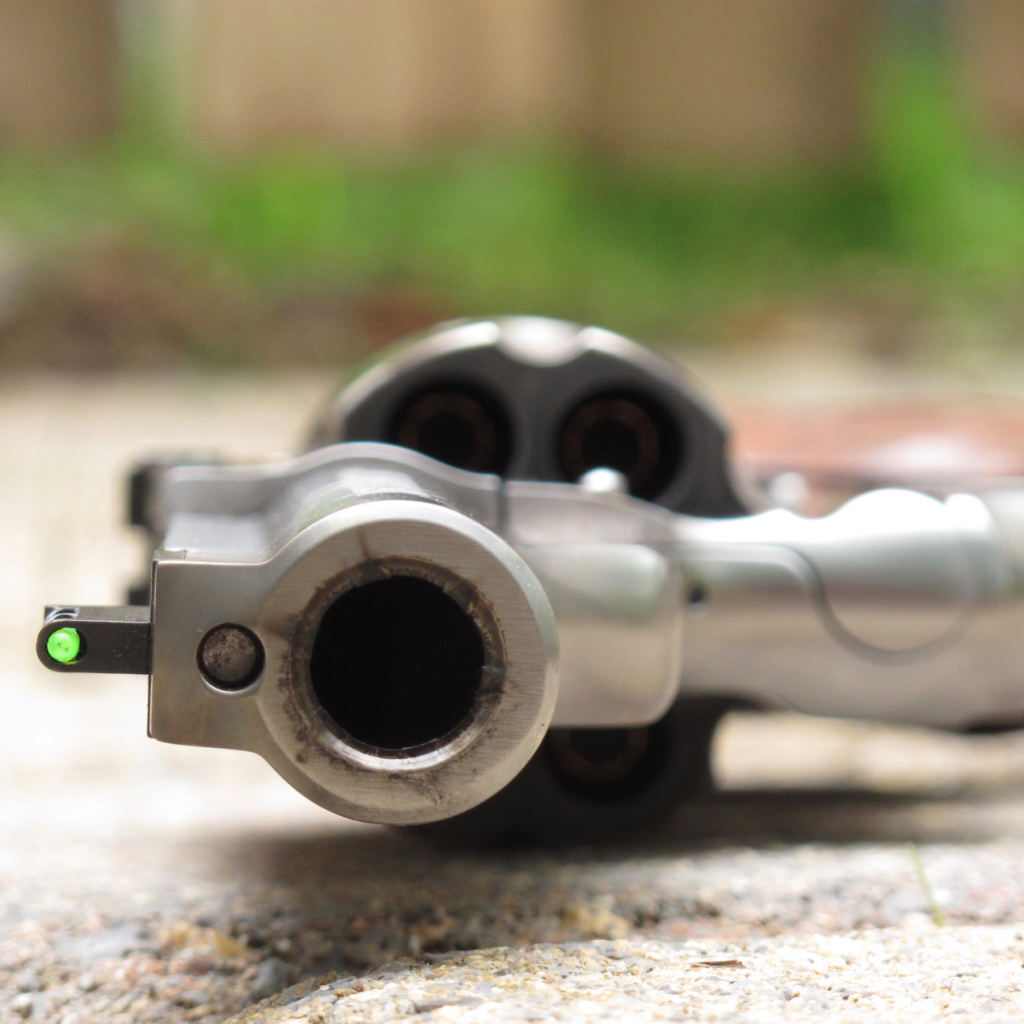 There is one other difference that I find interesting. The forcing cone is different from any other I’ve ever seen. Rather than being round, the exterior surface of the forcing cone is hexagonal. I imagine this simplifies a machining process or eases assembly, but I don’t know.

You may also recall that I was less than thrilled with the trigger on the .357 Magnum Match Champion. It was pretty gritty. That is not the case with the model I received for this evaluation. The double action trigger is smooth, and even a bit lighter than the last GP I reviewed. The single action trigger is crisp and lacks the superfluous travel I found in the other Ruger. Trigger “smoothness” is hard to quantify, but I am satisfied with this one.

Though the cartridges take their headspacing from the case mouth, this revolver is meant to be used with moon clips. The moon clips issued with the 10mm GP100 are fantastic. They are easy to load and unload, even without the use of a moon clip tool, but they still reliably eject the empties. The 10mm GP100 comes with a set of three full moon clips. Additional clips are available from shopruger.com at a reasonable price of $15 for a set of 3. 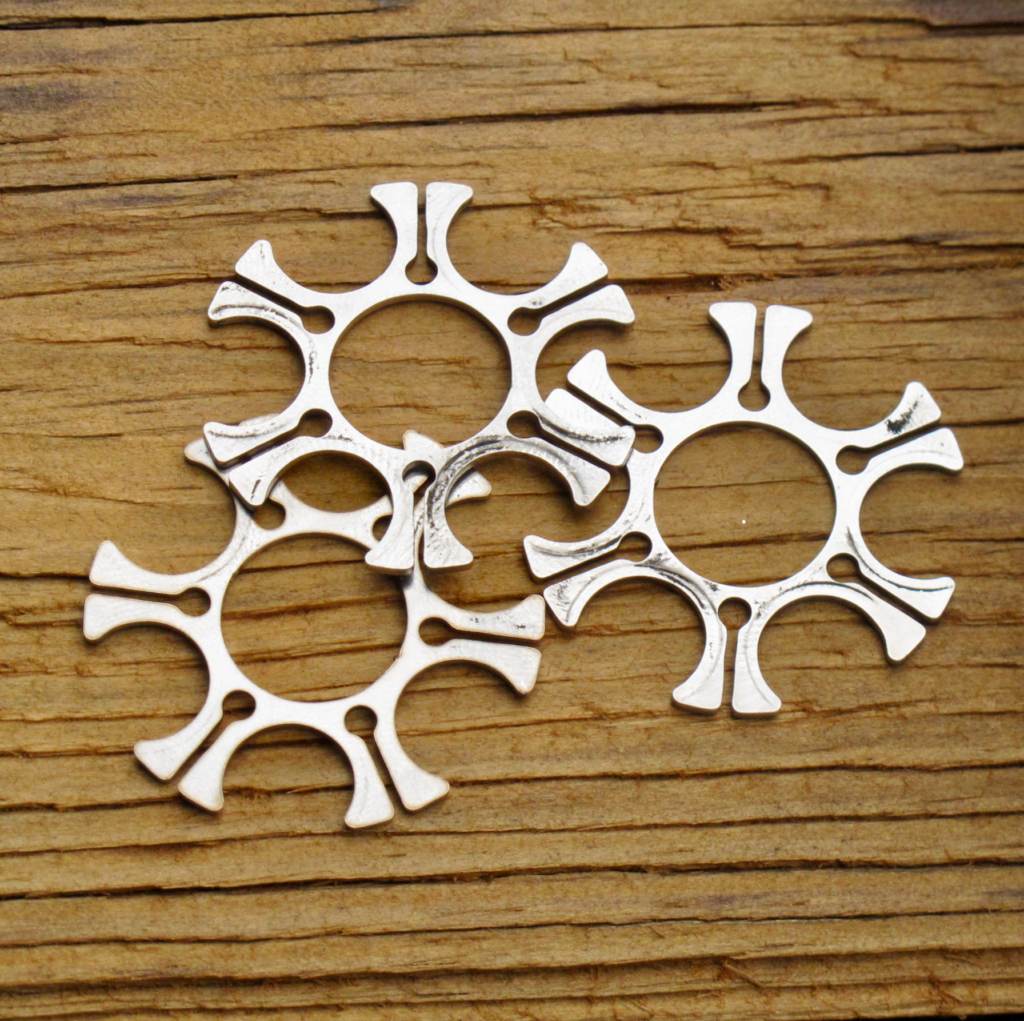 Moon clips present an interesting quandary. They offer the benefit of speedy loading. They also ensure all brass is ejected en mass. Unfortunately, moon clips are hard to carry. Bending one means potentially deadlining your revolver for a little while. Until someone gets around to making a 10mm Auto-Rim, it’s the best we can do, and I’ll be looking at some moon clip carry options in coming months. 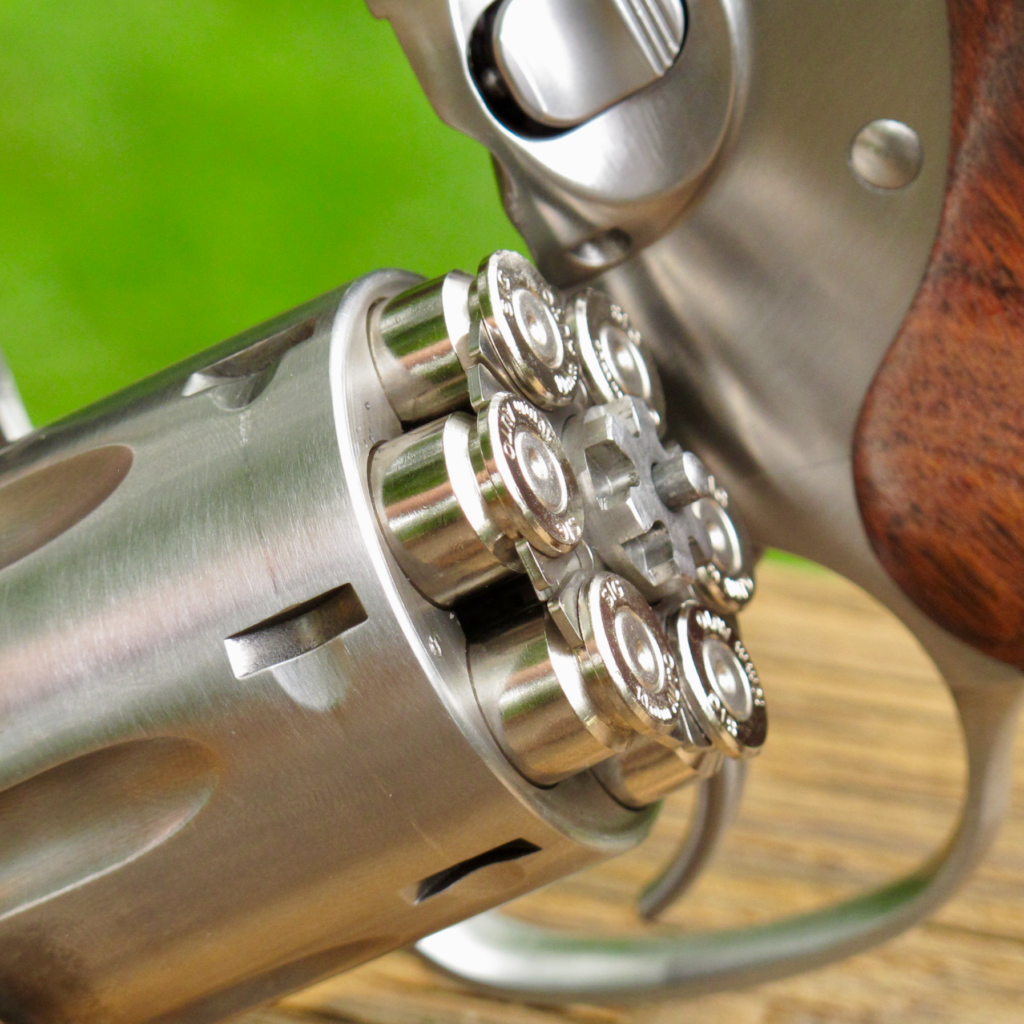 As I mentioned, you can fire this revolver without the aid of moon clips. Part of that bargain is sacrificing the ability to eject empties. The ejector rod simply doesn’t have anything to work against to push the cases out. In the few cylinders I fired in this fashion I found that most of the cases (usually four or five) would fall out when inverting the gun and giving it a good rap on the side of the cylinder. The rest had to be pulled out. Fortunately there is a good amount of case protruding from the cylinder; enough to pull the cases out by hand. 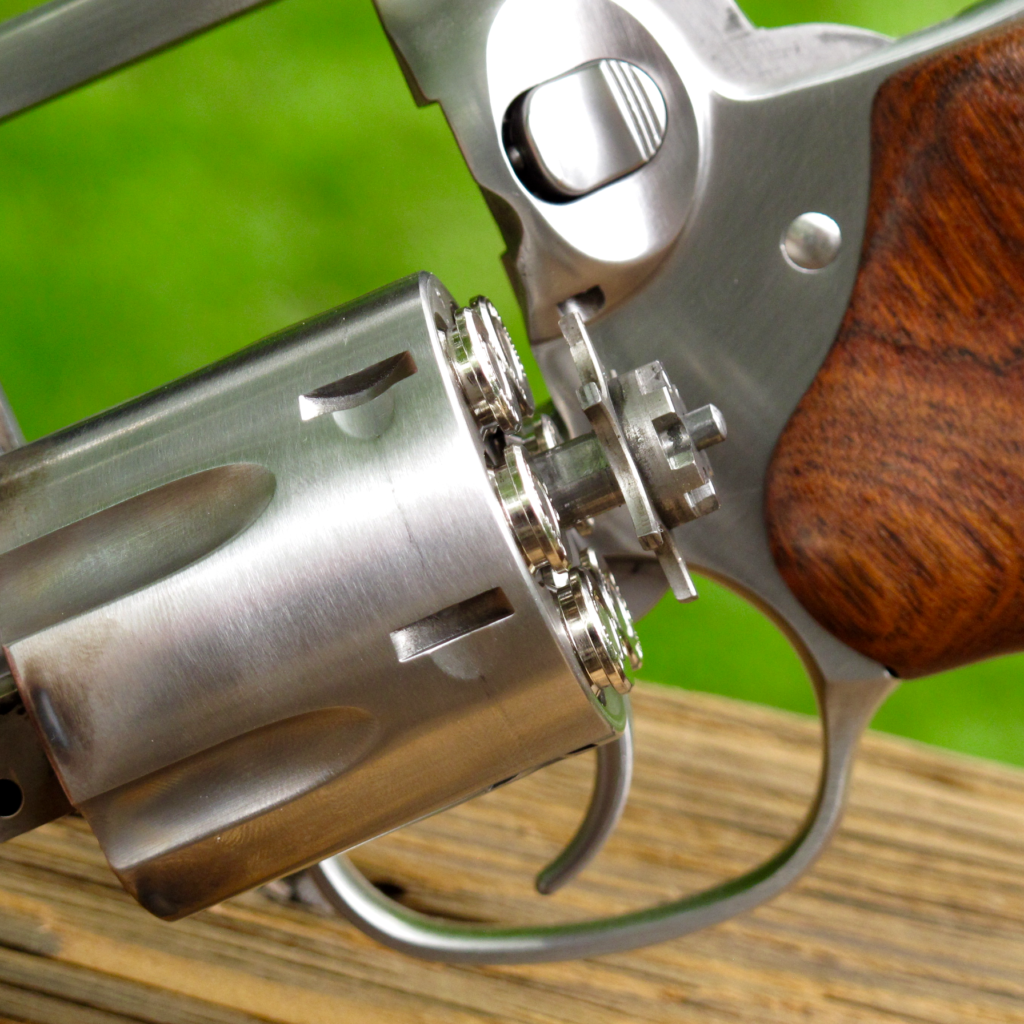 I wanted to load up on a dozen different loads for this revolver. Two things prohibited this: cost and time. This article is titled “Part I” and there is a reason for that. I haven’t shot this gun as much as I feel necessary for a full review, but I will follow up on that. We’ve been teasing these new guns for a while and I didn’t want to keep you waiting longer than necessary to get a look at this one.

So, I grabbed what was readily available. I shot the Ruger 10mm revolver with three loads: Federal American Eagle 180-grain FMJ, Sig 180-grain FMJ, and Sig 180-grain V-Crown JHP. I was pleasantly surprised to find that the sights were almost perfectly regulated for the 180-grain loads I chose. I did most shooting in double-action at the 20-yard line. I have no complaints at all and the new, improved sight picture really helped keep groups tight. 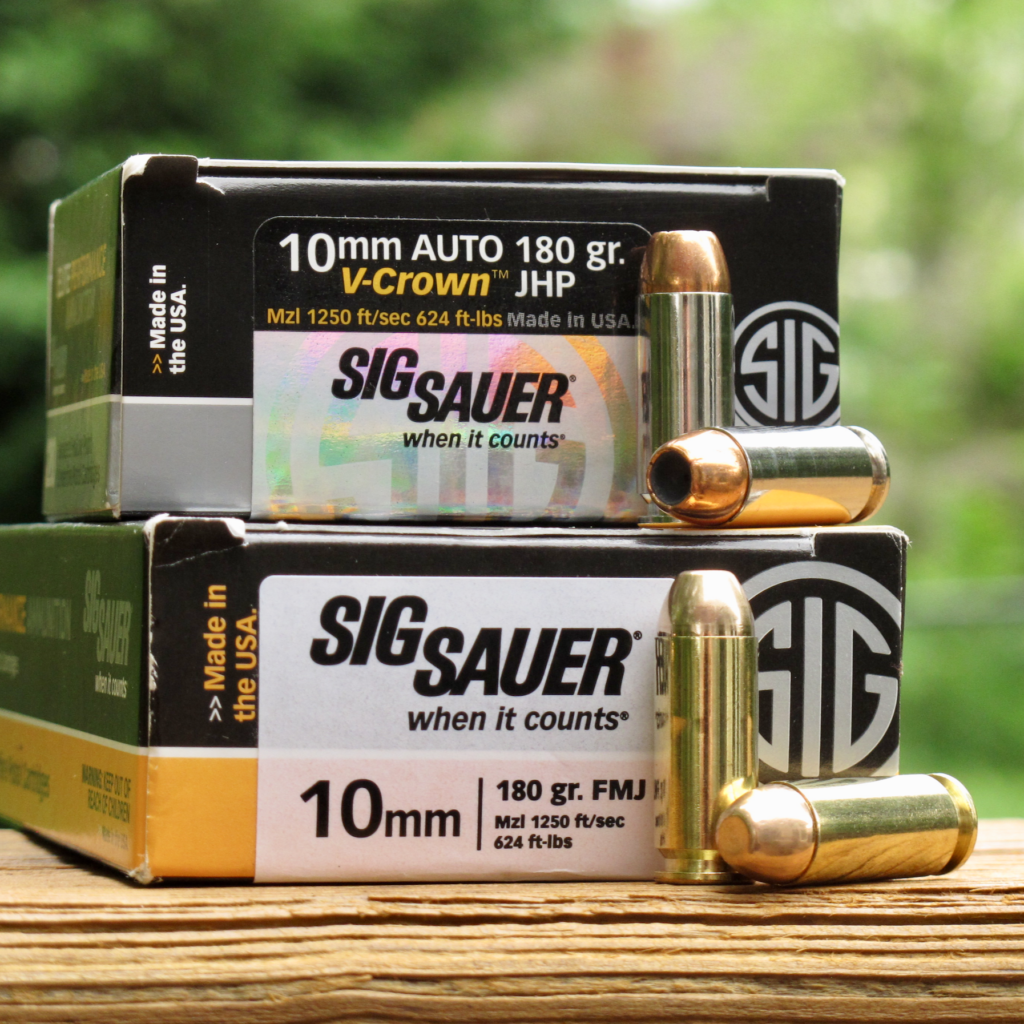 The Federal ammo is loaded to mild plinking levels and was easy to shoot. The Sig stuff, on the other hand, was a bit more brisk. It wasn’t unpleasant by any means; all ammo fired was perfectly manageable in the robust GP100 platform, and I would put it on par with a reasonably hot .357 Magnum. A little get-up-and-go is half the fun of shooting heavier calibers, though, and some heavy stuff from Double Tap is coming soon! The Ruger 10mm functioned perfectly with everything tested so far, which is to be expected.

Part II will follow up on this brief overview. I want to get some bullets over the chronograph and get some real-world numbers. I also want to do some true bench-rest work and get you some information about the gun’s accuracy potential. I may also do a more generalized look at the 10mm Auto, so stay tuned!

I don’t have many complaints about this revolver. Overall I am extremely happy with it, and there is nothing inherent in the design that I find fault with. I may eventually swap out the front sight, but overall the Ruger 10mm GP100 has been done right. However, and in the interest of calling it like I see it:

There is an extremely rough spot on the GP’s recoil shield. There are three deep dings and scratches. I’m not sure how this happened since this area is pretty hard to deface without also banging up the cylinder. My guess is that it occurred prior to the gun being assembled and was missed in QC. 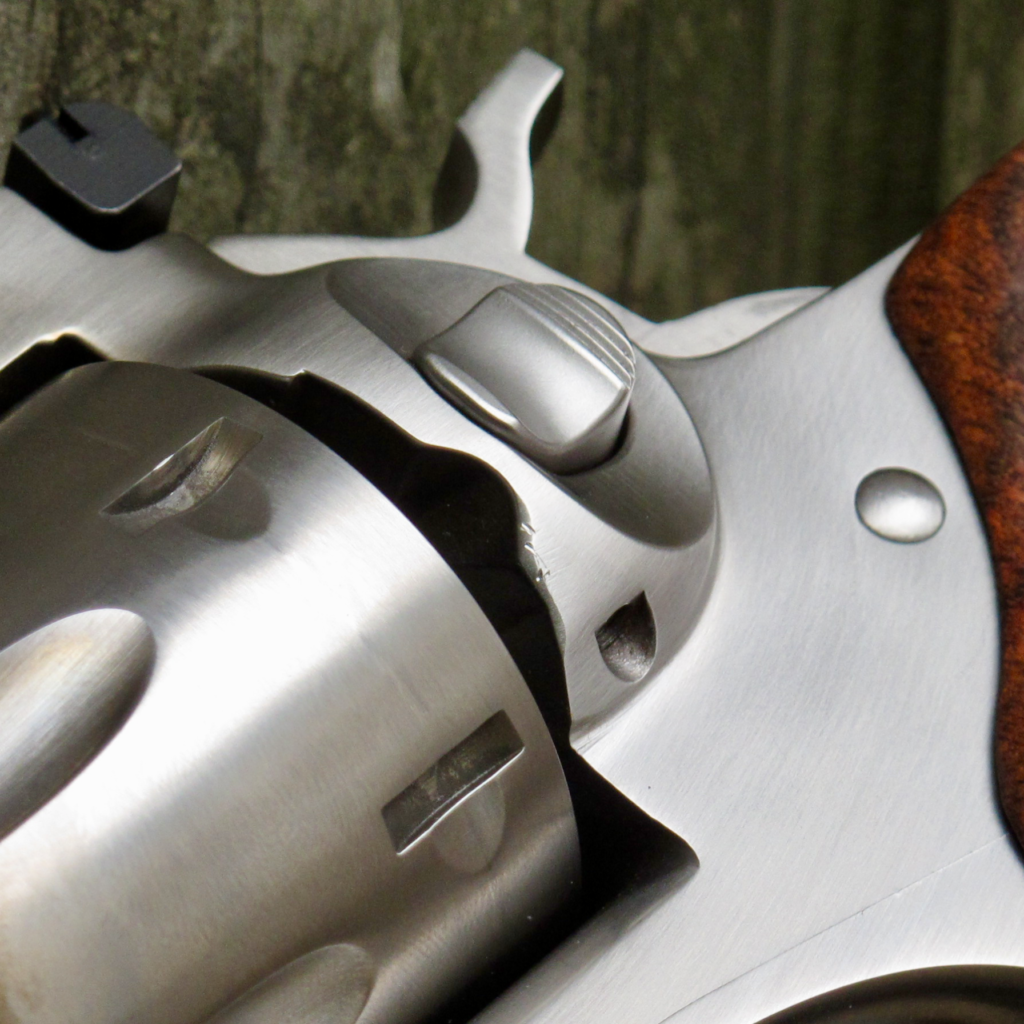 This defect doesn’t affect the function of the revolver. It could be stoned out fairly easily, and it wouldn’t stop me from hanging onto this gun. Which leads me to….

When I reviewed the .357 Magnum GP back in November, I made a promise. I said that my next full-sized revolver would be a GP100 of some stripe. Today I am going to live up to that promise. The Ruger 10mm GP100 Match Champion is a rock-solid revolver, and I’m not quite ready to let her go back. I will be purchasing this exemplar of the Ruger 10mm GP100. 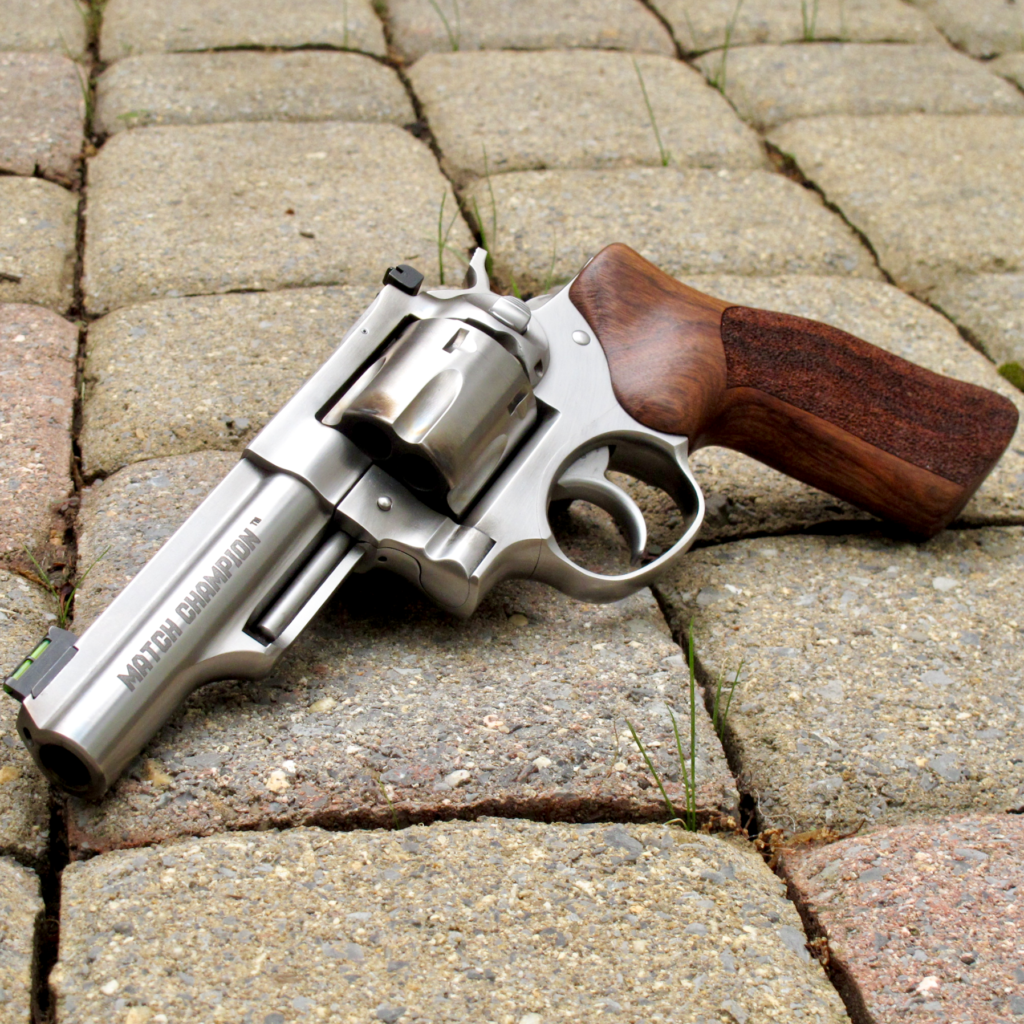 With a little luck (or maybe a lot of luck) you’ll see her this fall in an article about a successful hunting trip. I’ve been planning to start hunting, and this revolver might be the kick in the butt I need to get moving. The 10mm is an incredibly flexible chambering. Properly loaded the Ruger 10mm GP100 should answer the mail for self-defense, hunting, and light predator defense. It’s also a heck of a fun shooter! I want to get some time with ammo that suits all of those needs, as well as running the gun a little more and a little harder. I’ll be back to you with my results, so stay tuned!

P.S. – Sorry I didn’t get too many photos of this gun in her pristine state. I just couldn’t wait to get to the range!