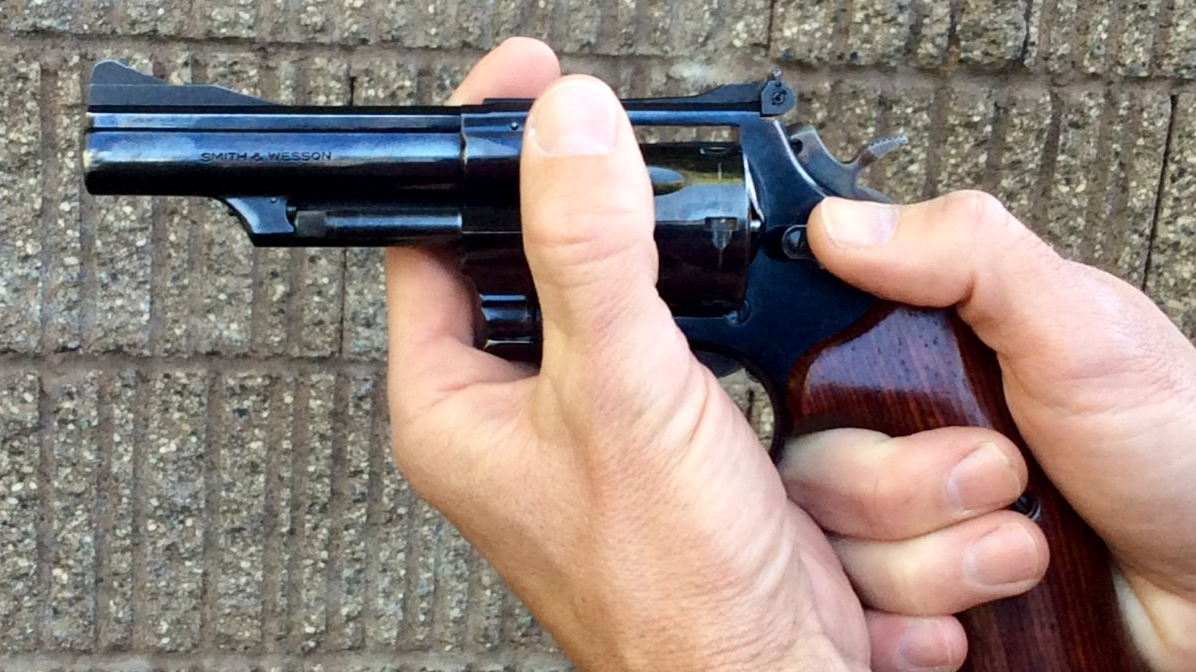 Justin’s excellent article on the Universal Revolver Reload (URR) raised a question from a RevolverGuy seeking suggestions for how he could avoid burning himself on the forcing cone of his revolver when executing the reload. He’s not the first to encounter this difficulty, and fortunately, there’s an alternative technique that can help: the StressFire Revolver Reload.

It’s important to note that the URR is an excellent technique, and not everybody suffers from getting burned on the forcing cone when they use it (or a similar technique that puts fingers inside the cylinder window) because there’s a lot of variables involved.

A medium-to-large frame gun offers lots of room inside the cylinder window for a person with thin fingers to grasp the cylinder and avoid the area near the forcing cone, but that same gun might put the guy with sausage fingers in jeopardy of a little BBQ action. If you shoot a little J-Frame sized gun, then you might get burned too, no matter how thin your digits are.

If your pace is leisurely, you might never heat up the gun enough for it to be a problem. However, high volume, rapid fire shooting (such as training) will definitely improve the odds of getting a blister on your booger hook, because the gun can get heat soaked.  This is especially true if you’re shooting a small frame gun without a lot of material to absorb the heat, or are shooting a steady diet of the fire-breathing Magnum cartridges that Justin favors in his guns!

Even if everything normally runs in your favor, a hurried or poorly-executed reload could find you putting your hand closer than it normally is to the forcing cone, earning you a reminder not to do that again.

Back in the 1970s and early 1980s, the increasing popularity of .357 Magnums in police work exposed a few weaknesses of traditional reloading methods. The 35,000 PSI pressures of the .357 Magnum (or even the 23,500 c.u.p. of the .38 Special +P+ loads) far exceeded the 17,000 PSI pressures of the standard .38 Special, and made the empty cases more difficult to extract after the rounds had been fired.  When the widely-popular “FBI” technique was created in the 1930s, working the ejector rod with the tip of the weak hand thumb did a good job of kicking spent .38 Special cases out, but the technique began to fall apart when the thumb struggled to break the grip of the high-pressure Magnum cases on the cylinder.

The greater volume of high pressure gas generated by the Magnum cartridges also heated up the forcing cone of the revolver faster than the more sedate .38s, making accidental burns more likely when the FBI technique was used to reload the gun.

To alleviate these—and other—weaknesses in reloading techniques, my friend Massad Ayoob developed a unique technique for reloading the revolver as part of his StressFire system. He introduced the technique to the public in his StressFire book, circa 1984, and taught it far and wide to police and armed citizens alike through his writing and through classes at his Lethal Force Institute.  I first learned the Stressfire Reload from Mas’ book, but in 1997 I got to refine it as a student in his flagship course, LFI-I (now, MAG-40), shooting a Model 640 and a Model 65.

The StressFire revolver reload minimizes the dependence on fine motor skills, and uses a powerful, gross motor-type† movement to operate the ejector. It also takes advantage of natural biomechanics to hold the gun in a pure vertical orientation for unloading and loading, which allows gravity to assist with the ejection of spent cases and the loading of cartridges.

Let’s take a look at how to execute a StressFire revolver reload from the perspective of a right and a left-handed shooter.

Rotate the gun so that the muzzle is pointing straight up towards the sky. Orienting the gun in this manner will help the spent cases fall free from the cylinder when the ejector rod is worked.  It will also allow other debris (unburned powder flakes, soot) to fall free from the gun with less risk of it getting trapped behind the extractor star, which could prevent you from closing the cylinder.

Keeping your right hand free of the area behind the cylinder, use the palm of your left hand to strike the ejector rod once in a sharp manner. If you have a service-sized gun, you can place the web between your left thumb and index finger against the barrel, and let the barrel guide your palm straight down onto the tip of the ejector rod. Doing so will help to ensure that you hit the rod squarely, and not at an angle which would rob your strike of its power, or potentially bend the ejector rod (which could prevent the cylinder from rotating).

It’s useful to note that since your right hand is on the grip of the pistol and out of the way, your palm strike of the ejector rod will be unimpeded, helping to guarantee a full throw. This is not the case in many competing techniques, which use the left hand to hold the cylinder, and the right to strike the ejector. It’s also important to note that the ejector rod should not be “pumped.”  One firm strike will move the ejector rod its full length, and deliver enough force to kick the empty cases free.  If you try to pump the rod, you run the risk of not pushing it down all the way, and getting a spent case trapped underneath the extractor star.  You’ll also waste time.

Now, release your grasp of the gun with your right hand, invert the gun, and point the muzzle straight down at the ground. Placing the butt of the grip against your belly will provide a good index and help to orient the gun properly. Your left hand will be cupping the cylinder and holding it open, ready to accept cartridges from the right hand. The pure vertical orientation of the gun will maximize the opportunity for gravity to do its job in seating the cartridges.

After the cylinder has been loaded, assume a firing grip on the gun with your right hand. Push the cylinder closed with the base of your left thumb, and move your left hand to assume a two-handed grip on the revolver. If you used a speedloader, it should fall away on its own, without any extra help from you.

The left-handed version of the StressFire revolver reload is slightly different. 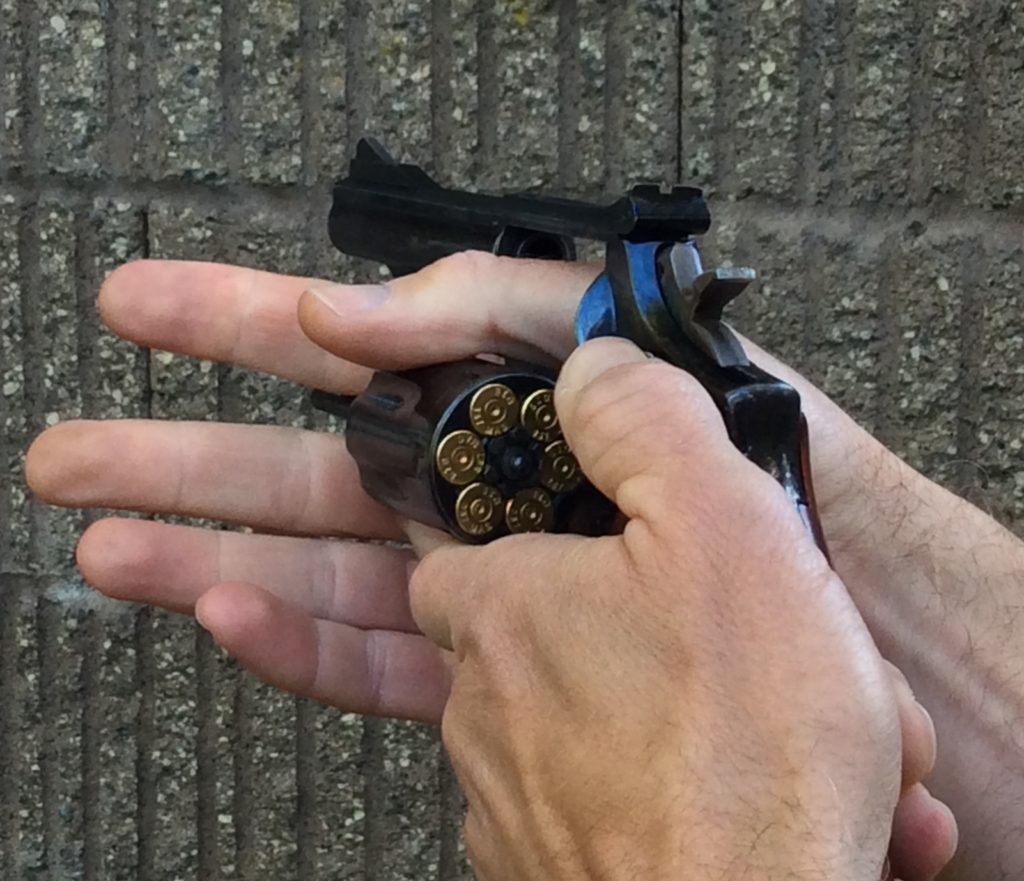 Once the spent cases are ejected, rotate the gun muzzle down, and place the butt of the weapon against your belly as an index. The cylinder is still being cupped by the right hand, which holds it open to accept cartridges from the left hand.  Once again, the pure vertical orientation will allow gravity to do its best work. 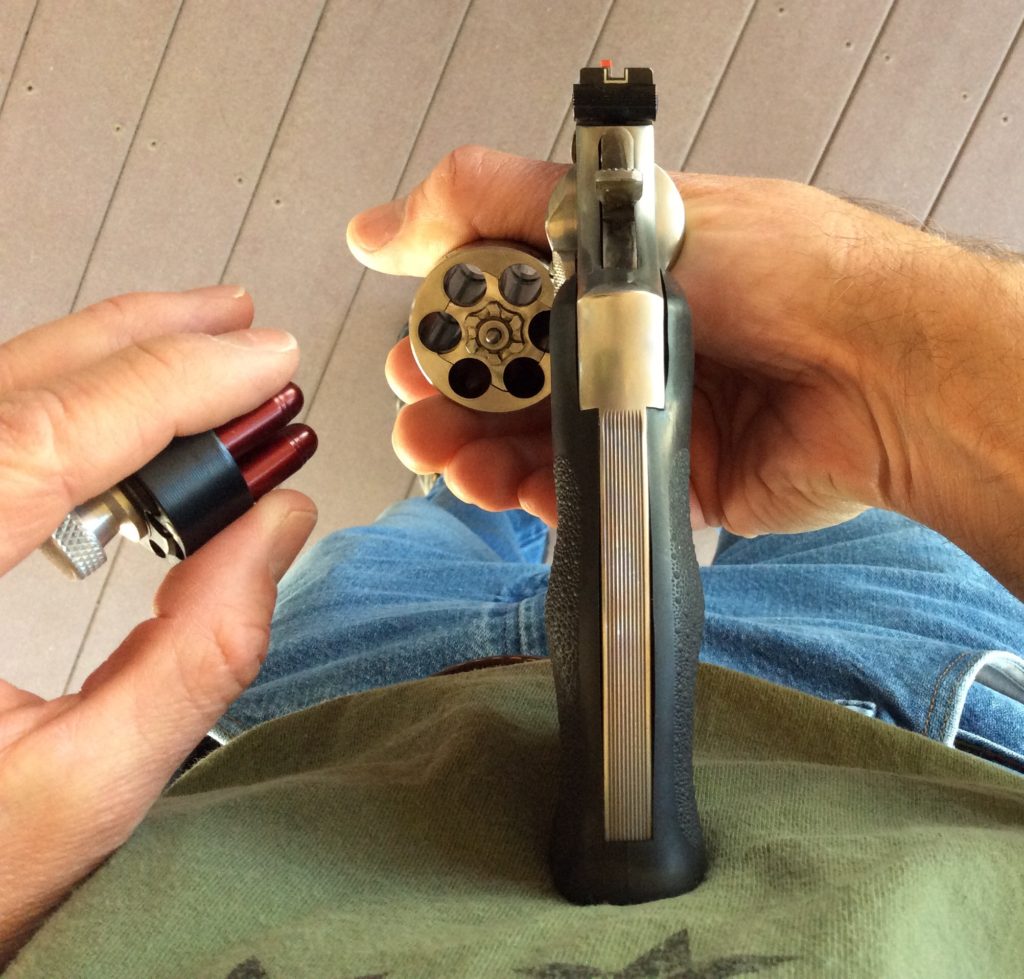 The choice of how you load your revolver is up to you, but the StressFire revolver reload is definitely worthy of your consideration. We’ve discussed several of the benefits along the way, but the strongest one in my opinion is how easy it is to keep the gun in a purely vertical orientation for ejection and loading.  When I use other techniques, I tend to hold the gun at an angle (particularly for loading) which robs gravity of some of its effect.  In contrast, the StressFire revolver reload makes it easy to hold the gun straight up and down.  This is a huge benefit for those of us using gravity-feed speedloaders, like the popular Safariland Comp-series loader.

So, if you’re concerned about burning your hand on the forcing cone with other methods, give the StressFire revolver reload a try and let us know what you think. Even if your gun isn’t branding you during reloads, give the technique a try and see what it has to offer.  I think you’ll find a lot to like there.

†Note from Justin: Mike is using the correct terminology here in referring to a gross motor-type movement. The misuse of “gross” and “fine” in regards to motor skills is rampant in the firearms industry. Gross motor skills are those that involve large movements of the arms and legs (running, jumping, punching), while fine motor skills are anything involving small movements of the hands, wrists, feet, and toes (holding a fork, typing, loading magazines). While some will turn up their nose at using the slide release‡ because it is a fine motor skill, they disregard the fact that the “power stroke” or “slingshot” or [fill in the blank] is also defined as a fine motor skill.

‡Still others will get mad at me because I called it a slide “release” instead of a slide “stop”. Sometimes you just can’t win…