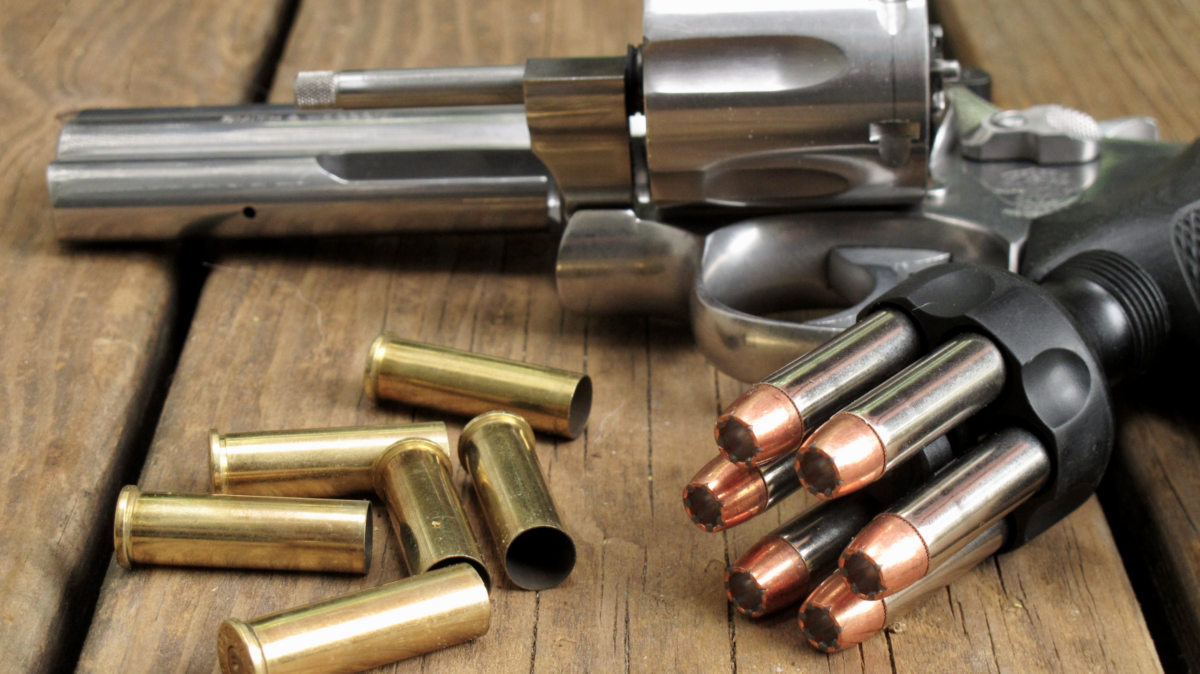 Revolvers require a lot of reloading. Through the course of a range session you’ll have to reload about three times as often as your Glock-toting counterparts. You could look at this as an inconvenience or a blessing in disguise. I am more inclined to the latter. Since you have to reload a lot, you’ve got a lot of chances to practice your reloading technique. Today I’m going to talk about my favorite reloading technique: the Universal Revolver Reload.

Even if you don’t believe you will need to reload in extremis, it’s not a bad idea to learn an efficient technique. If you’re an old RevolverGuy you know there are several ways to skin this cat. If you’re just becoming a RevolverGuy, you may be confused by the various ways you see people reloading (many of whom haven’t adopted any specific technique).  There are several ways to reload the revolver, but this one offers some benefits that I’ll talk about at the end of this article. And if you don’t like it, stay tuned, and I’ll talk about some other techniques in the future.

Caveat: While I am working on an article for left-handed shooters, the technique presented here is for right-handed shooters. As such, I will use “right hand” and “left hand” instead of the more common, yet inconsistent, (and confusing) cool-guy nomenclatures for your two hands that abound in the shooting world.

The Universal Revolver Reload will require some equipment. First, you will need a speedloader. I have reviewed a number of speedloaders on this site and my preference, in order, is as follows: S.L. Variant, Jetloader, and Safariland Comp II. This will be dictated by personal choice and what is available for your revolver.

The next thing you will need is a speedloader pouch. Though some use their pocket, this isn’t preferred (at least by me). First, because it is carried on strong side, there is a good chance your pocket will be obscured by your holster. Second, there’s a bunch of other stuff in my pocket, and probably in yours, too. This creates several nasty possibilities: the loader coming out with coins stuck in it, stuff coming out of the pocket with the loader, something activating the loader and releasing the cartridges in my pocket, or the loader repositioning itself in my pocket to a butt-down attitude. A speedloader pouch will ensure both a consistent grip on the loader, and that it is always carried in a consistent location.

Since you are reloading with your right hand, the speedloader should be carried on your right side. I prefer to carry my speedloaders just forward of the holster (for 3 o’clock, OWB carry). For outside-the-waistband carry I think Jox Loader Pouches are as good as it gets. I have also reviewed several other loader pouches here.  Again, your selection will be limited by the revolver you carry and your preference in speedloaders. 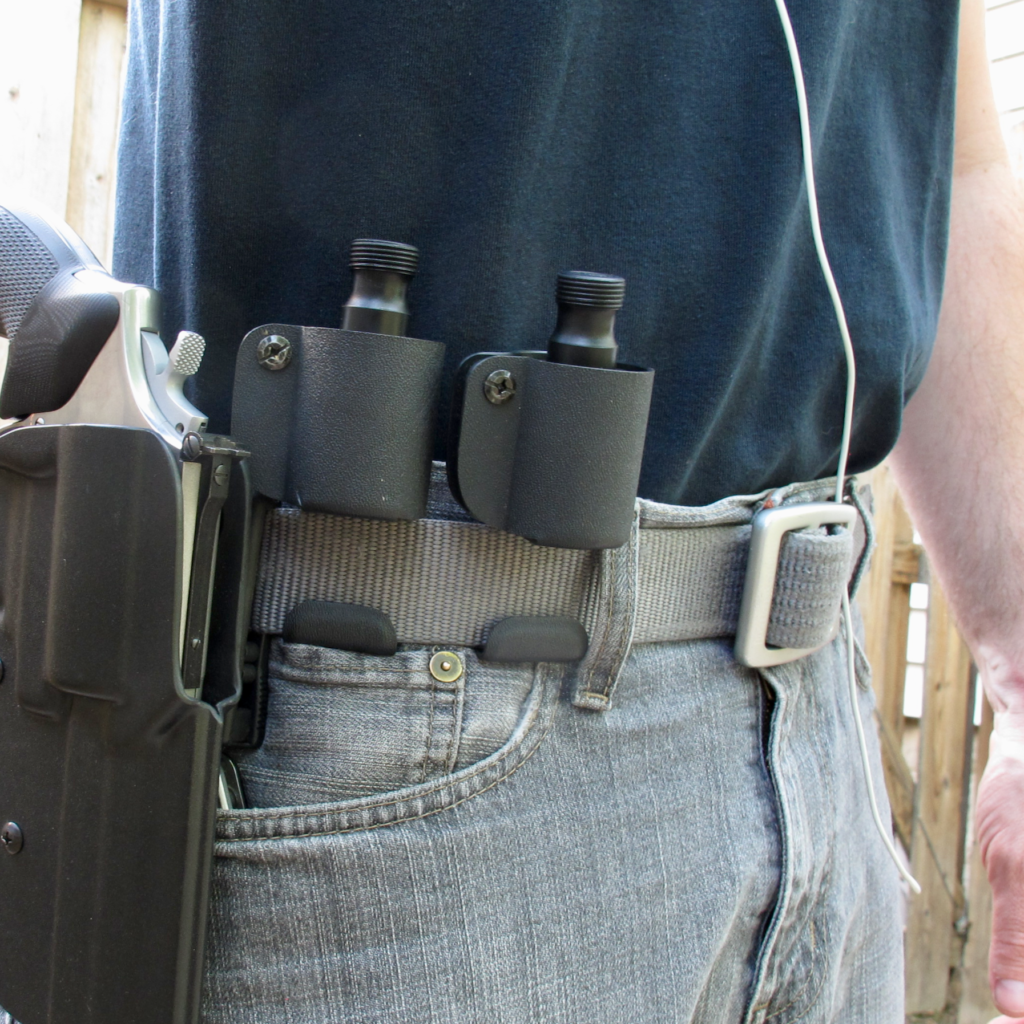 The Universal Revolver Reload was so named by Grant Cunningham. The technique works on most Colt, Ruger, and S&W revolvers. The technique for opening the cylinder release latch (which makes the URR “universal”) is discussed in Step 1 below. I personally feel this is the most useful revolver reloading technique, but your opinion may vary (and that’s OK).

Like any of these techniques, the Universal Revolver Reload is a multi-step process. With an autoloader there are basically three steps: get the empty  magazine out, get a full magazine in, close slide. With a revolver there several more discrete steps that must be accomplished. This description of the Universal Revolver Reload begins with the revolver at full extension in a two-handed firing grasp, as shown below. 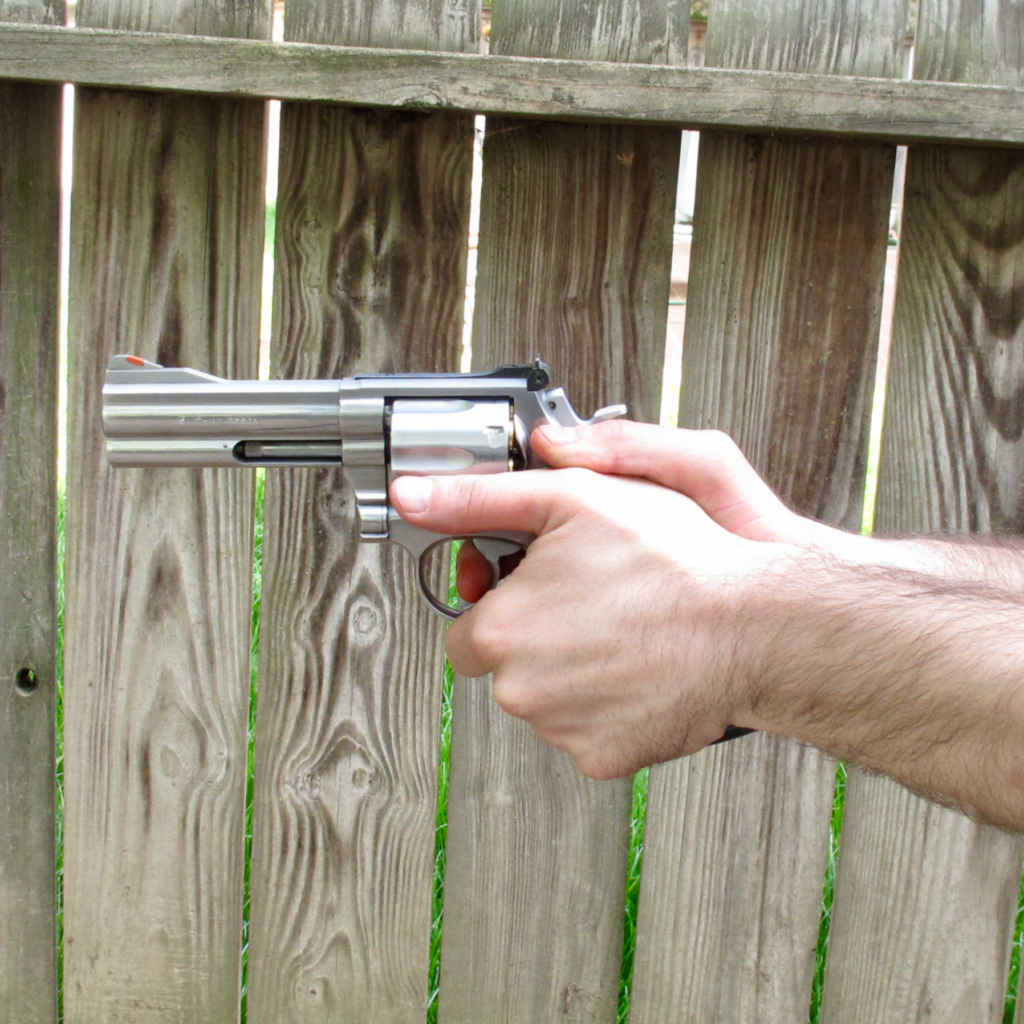 Step 1: Open and Orient the Gun

Several things have to happen at once. First, your left hand should release its firing grip and move forward on the gun. Position the hand just under the trigger guard and frame. This will accomplish two purposes: it will cradle the revolver, and it will allow the middle and ring fingers to push the cylinder out of the frame window. The thumb of the left hand should wrap over the cylinder. Supporting the cylinder will be important in the next couple of steps.

Simultaneously, your right thumb should stay put. As the revolver is pulled back into the workspace, pressure provided by your left fingers will cause it to rotate slightly. This is enough movement for your thumb to depress the cylinder release latch on a Ruger or S&W revolver. If you are shooting a Colt revolver, this will also snag the latch as the revolver rotates far enough forward to provide reverse pressure against the latch. As you activate the latch, the fingers of your left hand should begin to push the cylinder out of the frame window. As soon as you have begun to open the cylinder, release the grip with your right hand. To make this all even more complicated, as all of this is happening the gun should be brought back into your workspace and be oriented more or less vertically. 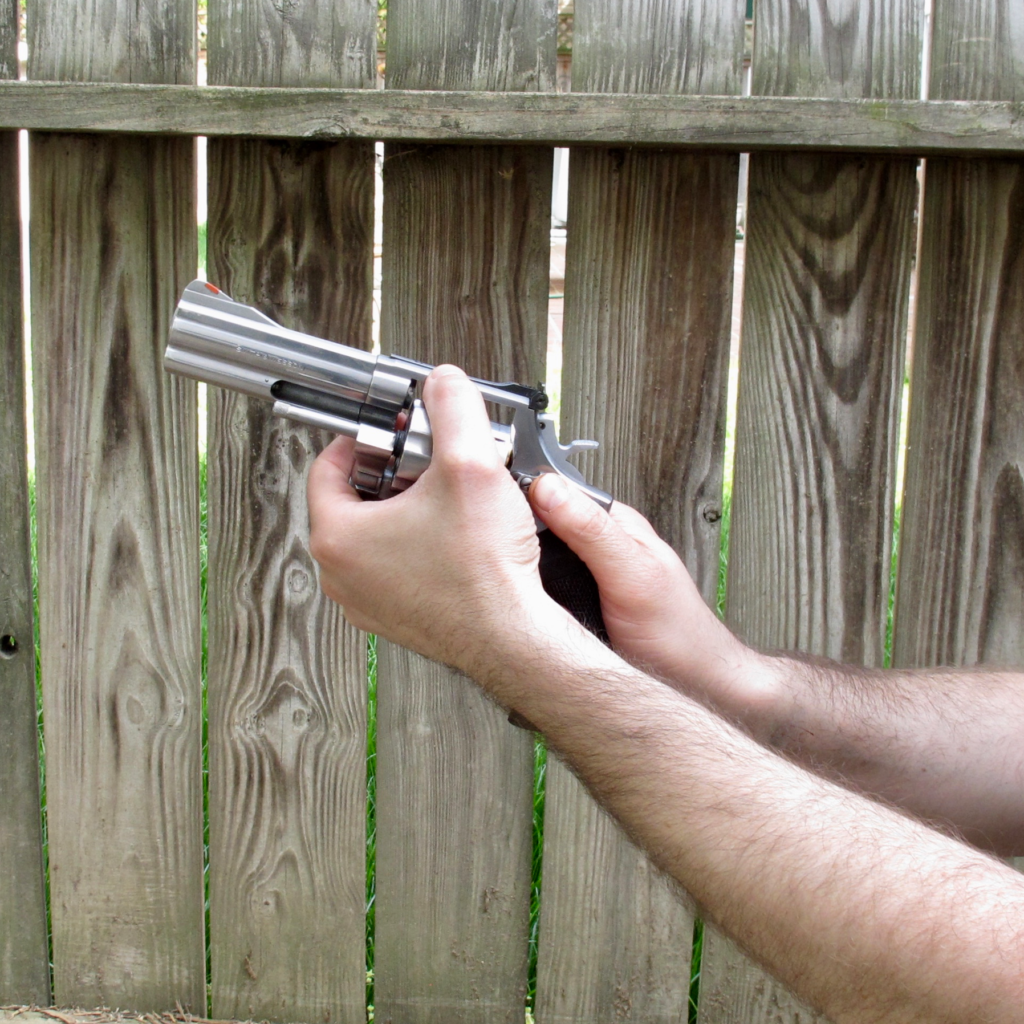 Getting the brass out of the cylinder is the next step. To accomplish this, ensure the gun is rotated to a muzzle-up attitude. With the right hand, slap the ejector rod firmly. Even on full-sized revolvers, the ejector rod will not throw to a distance exceeding the length of the brass, so you want to create some energy. The brass should be ejected with authority. If you have a smaller revolver with a very short ejector rod you may wish to slap it harder. First, the shorter rod means it is more rigid and less likely to be bent. This also creates more energy, which helps to deal with the shorter throw of the rod. 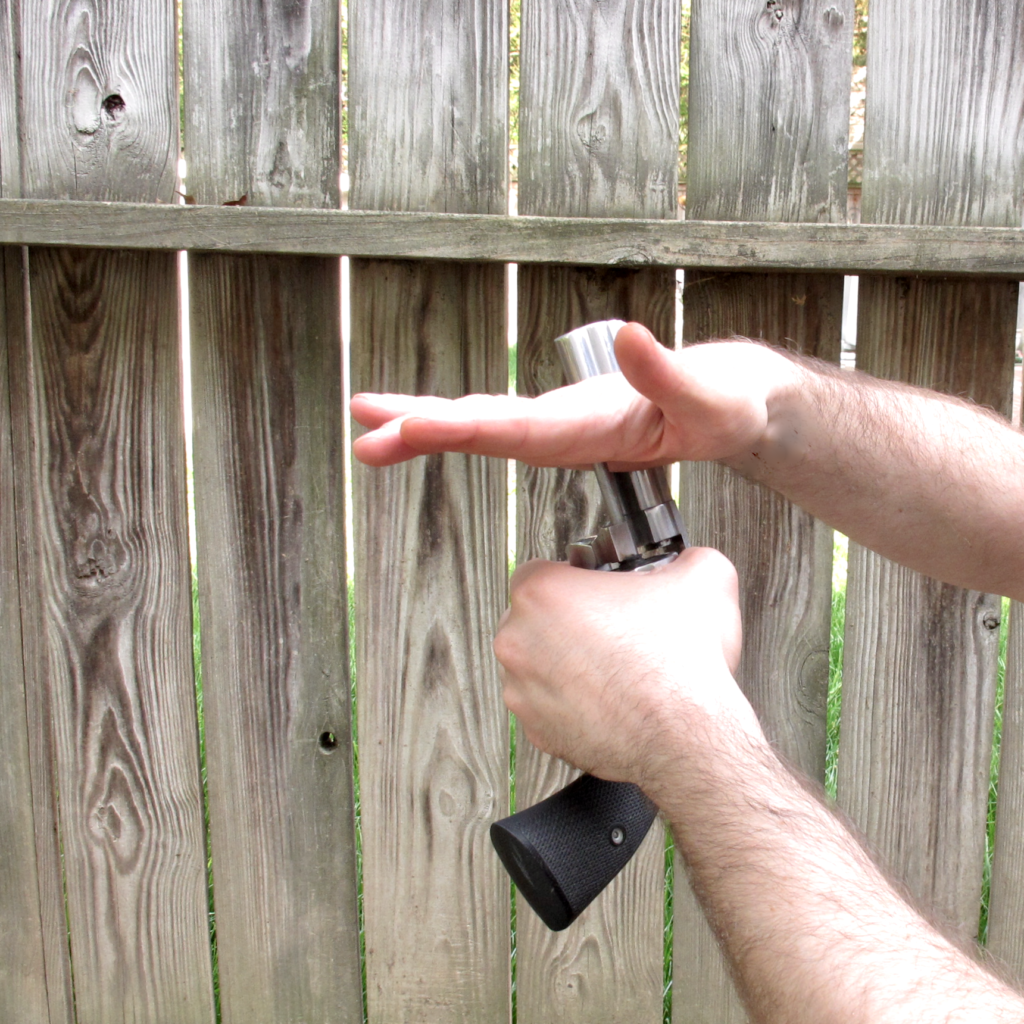 As soon as you have slapped the ejector rod, your right hand should drop to your speedloader pouch and retrieve the speedloader. The left hand should rotate the revolver to a muzzle-down attitude. The severity of this orientation will depend on the speedloader you are using. If you are using one that relies solely on gravity to seat the rounds, the gun will have to be very nearly vertical. This is one of the major benefits of the S. L. Variant and Jetloader speedloaders. Because they are spring-loaded and propel the cartridges into the chambers, the gun can be oriented much closer to horizontal as shown below. This also helps in keeping the gun near eye-level. It still must have a slight downward cant to ensure the cartridges remain seated. 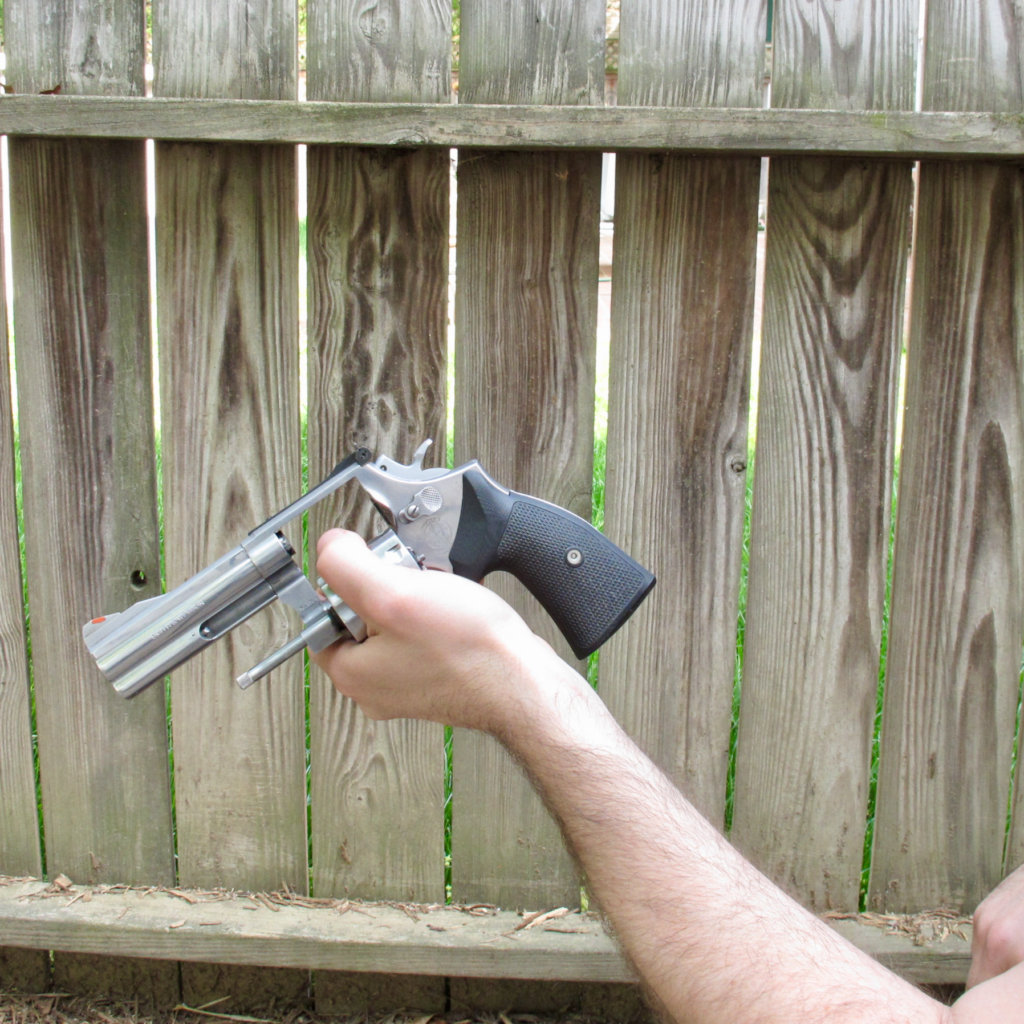 With the cylinder voided of brass the the gun correctly oriented, you are ready to insert fresh ammunition. Bring the speedloader to the gun. The most delicate part of the Universal Revolver Reload is aligning each cartridge with a charge-hole. At this point you should SLOW DOWN. The rest of the movements you have accomplished to this point can happen extremely quickly but this step will require some finesse. This is similar to the act of putting a magazine in a semi-auto, only six times harder. 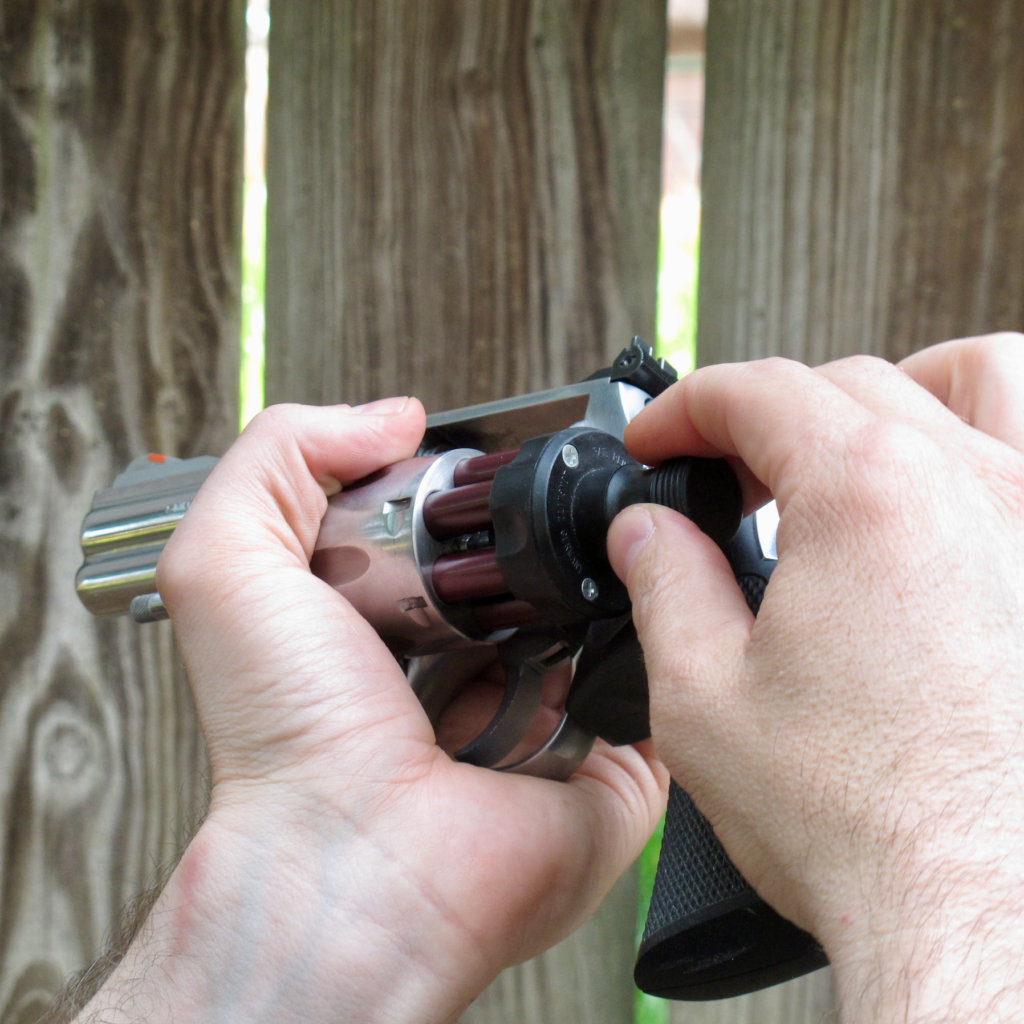 To ensure correct alignment, I visually select two of the chambers on the outboard side of the cylinder. As I move the speedloader to the cylinder, I choose two outboard cartridges and align them with the appropriate chambers. I then “look” the two cartridges into the two chambers. Aligning only one cartridge/chamber combo will not ensure the entire loader is correctly aligned, but two will.

At this point the empty speedloader is useless, so you should get rid of it. Simply releasing the loader will usually allow it to simply fall away. I don’t recommend an additional motion to throw it away. Occasionally, and depending on your grip, this may mean that the loader gets caught in the semi-open palm of the left hand as shown below. If this is the case, a quick downward sweep with the right hand will clear it. 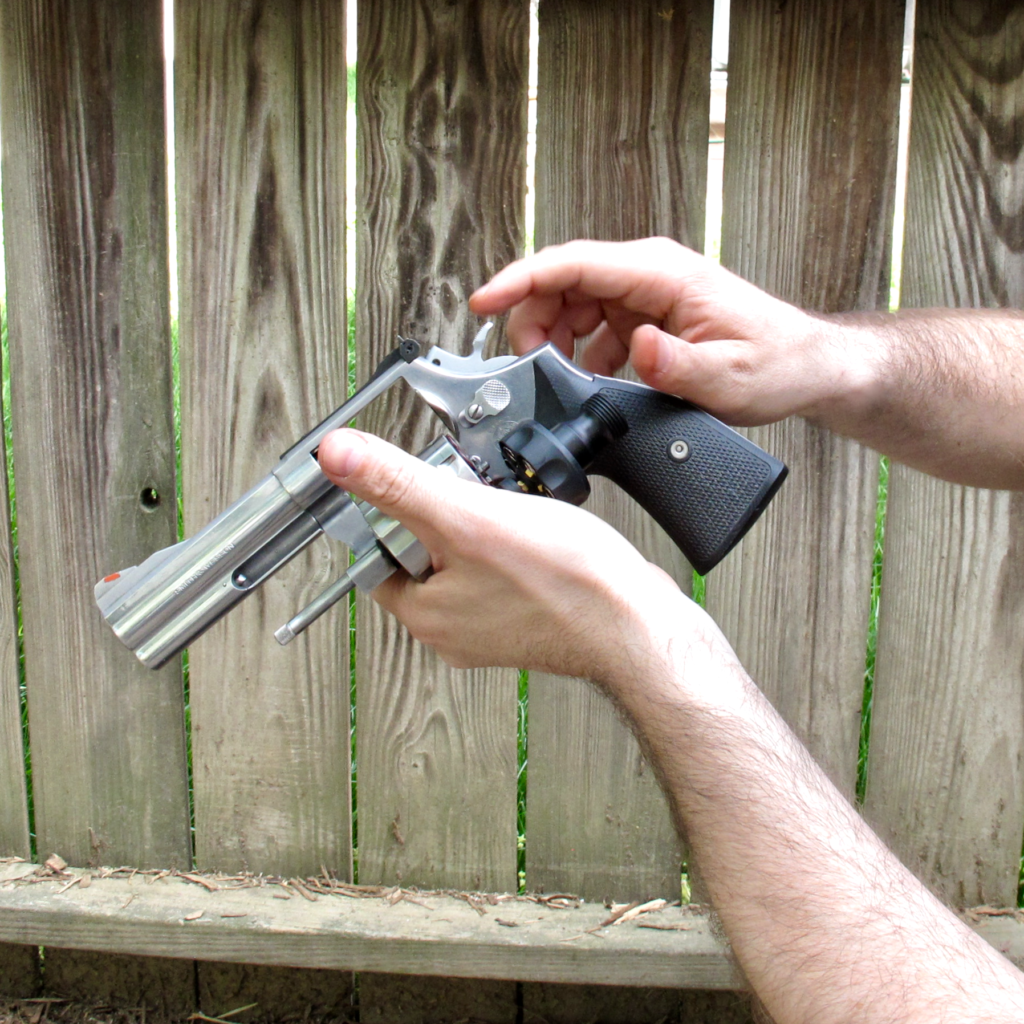 Step 5: Close the Gun and Reacquire a Firing Grasp

As soon as the cartridges are seated and the speedloader is out of the way, close the cylinder. All this takes is a quick rotation of the left-hand palm. At the same time, the right hand should move back to the grip. The right hand should re-assume control of the revolver, and establish a firing grasp. 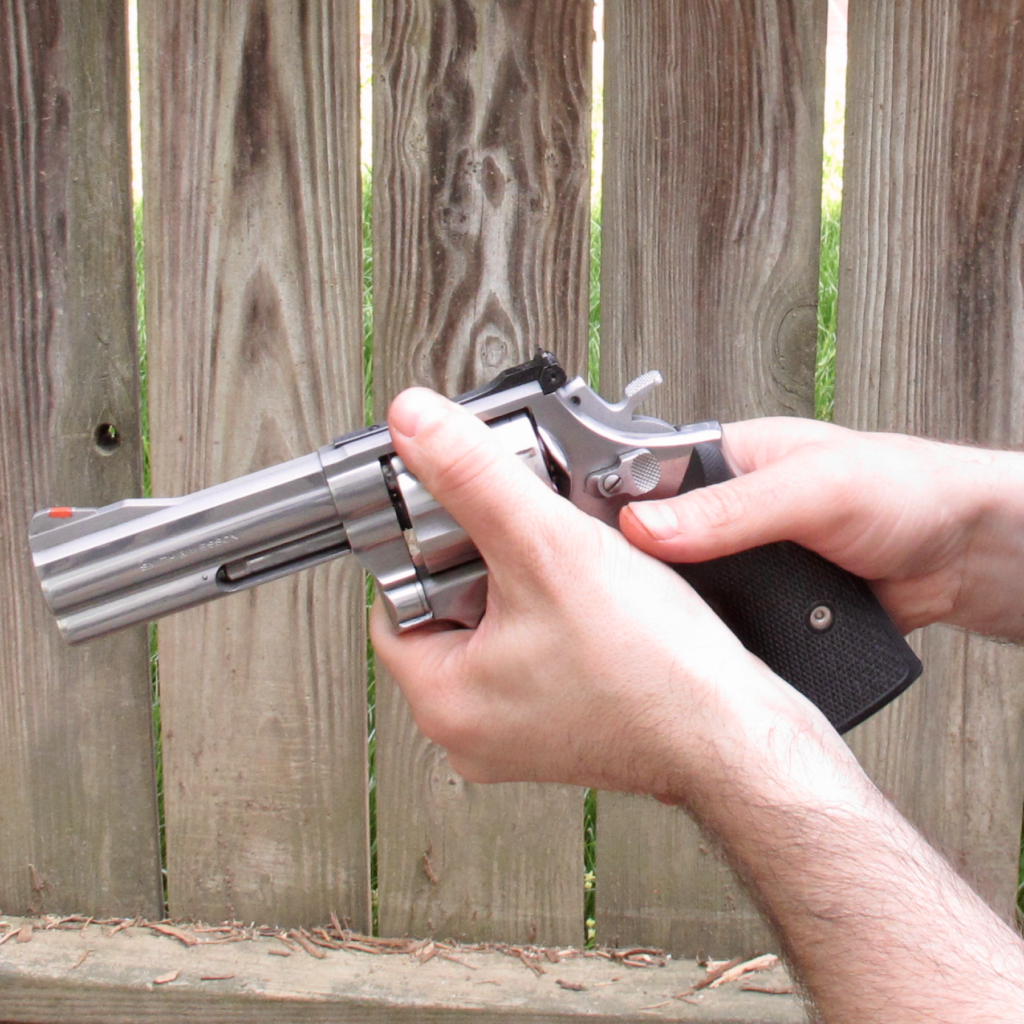 The left hand can pull back to its normal firing grasp position, as well. Achieve a solid firing grasp and present the gun back out to the target if necessary. You have now completed the Universal Revolver Reload. 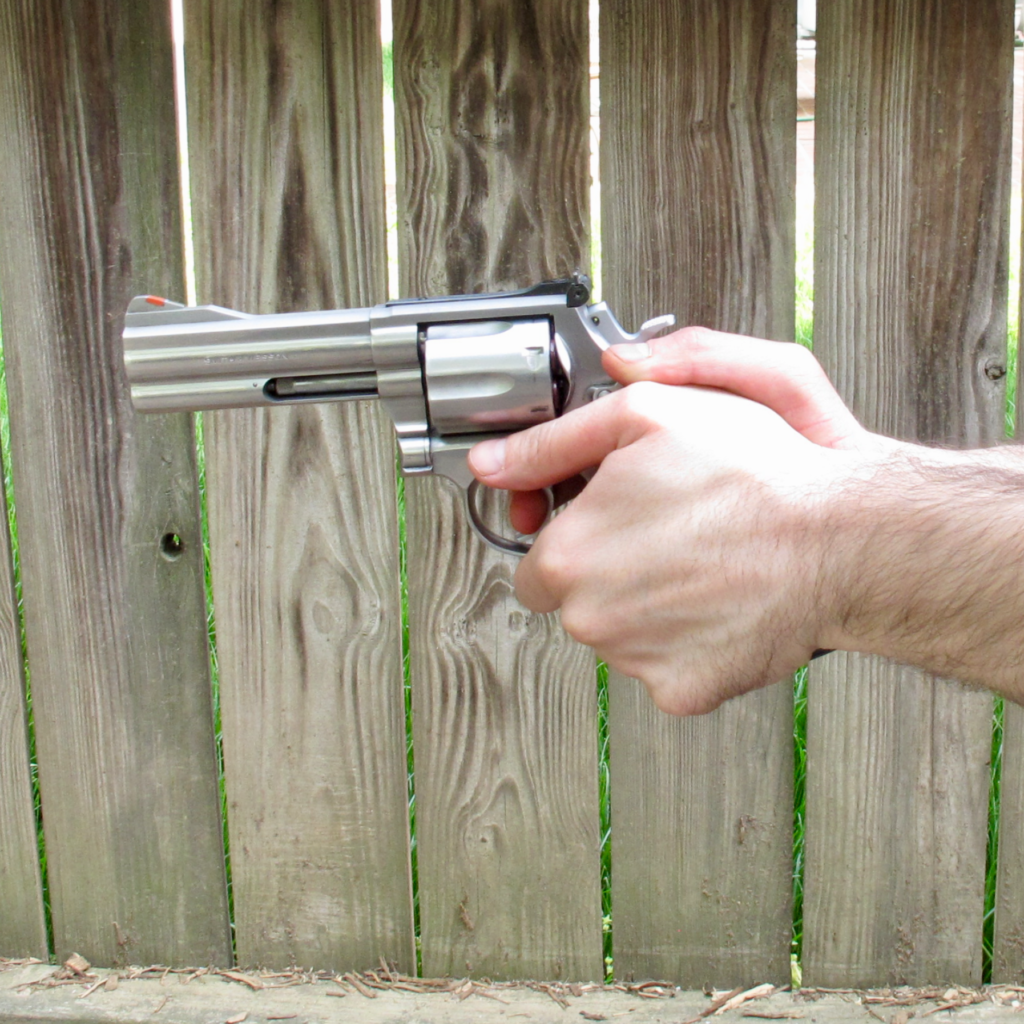 The biggest controversy around this technique is the swapping of the gun from hand to hand. Let’s talk about the pluses and minuses of the Universal Revolver Reload.

Swapping Hands: My biggest problem (and everybody else’s) with this technique is that the guns switches from right hand to left hand and back to right hand before it is complete. This is a complicated dance, and Mike wrote about it entertainingly and at length recently. There is all sorts of potential for things to go wrong, not the least of which is dropping the gun. That is an immediate disqualifier in competition, and obviously undesirable in a self-defense situation. It also takes time to do all this switching and swapping. But it does offer a benefit…

Right-Handed Reloads: the reason for all the hand-swapping is so your right hand can do the work of lining up six (or five, or seven, or eight) cartridges with an equivalent number of charge holes. At the same time. This is also a complicated dance. It can be done with the left hand and Nate Parker at Priority Performance is very good at it; you can watch him do it HERE. The old dog that is your left hand can be taught new tricks. For my money, though, I like the confidence that comes from reloading with my right hand.

Universality: The Universal Revolver Reload is more or less universal. This technique should work on all Ruger, and S&W designs, as well as their derivatives. If you carry different revolvers, or just shoot a bunch of them, this means you have a technique that will work for all of them.

You may decide that this is not the technique for you. If not, that’s cool. Stick with us and we will cover a couple more techniques in the coming weeks. Again, even if you don’t expect to need to reload, take the time to learn a technique. If nothing else it will make your time at the range more efficient!