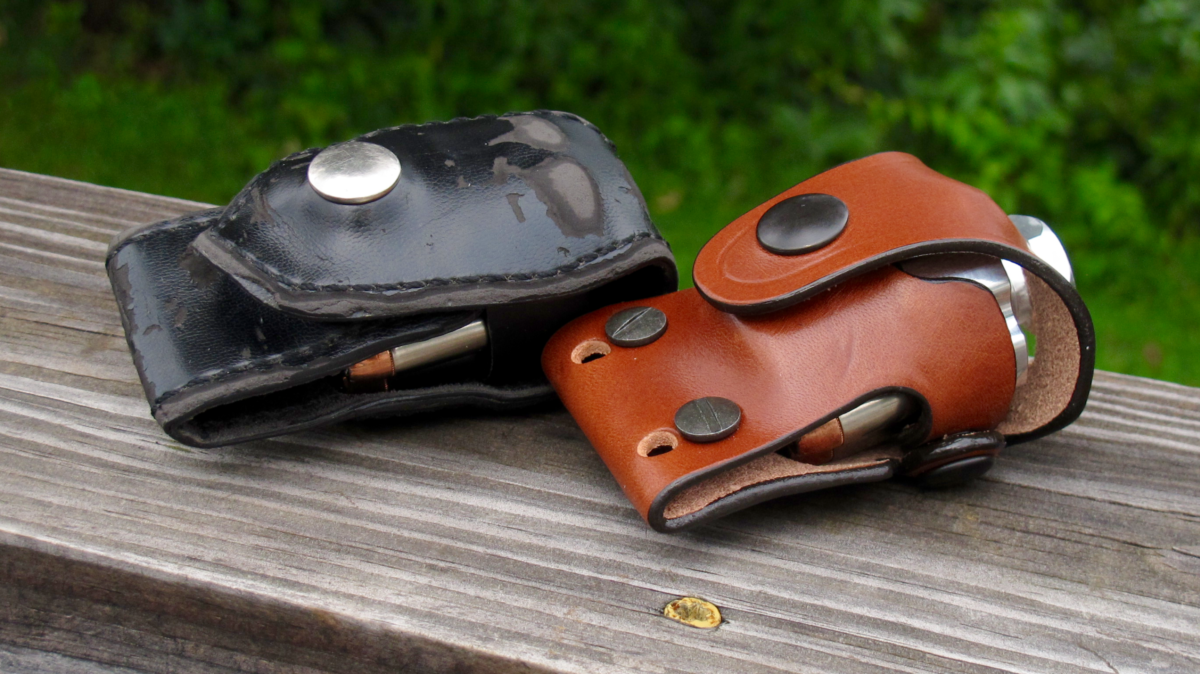 Recently I had occasion to visit Prescott, AZ. Mike Wood was invited out to the Ruger factory and he was gracious enough to ask me to tag along. During the rest of our time there we did some shooting and did the “mall crawl” through many of the local gun stores. A lot of them had bins of used grips, pouches, nylon holsters, and miscellaneous magazines. There aren’t many guys that enjoy rooting around through stuff like that, but I do, and apparently Mike does, as well. I found some pretty interesting items, but nothing as cool as a beat-up pair of Safariland Split-Six pouches! 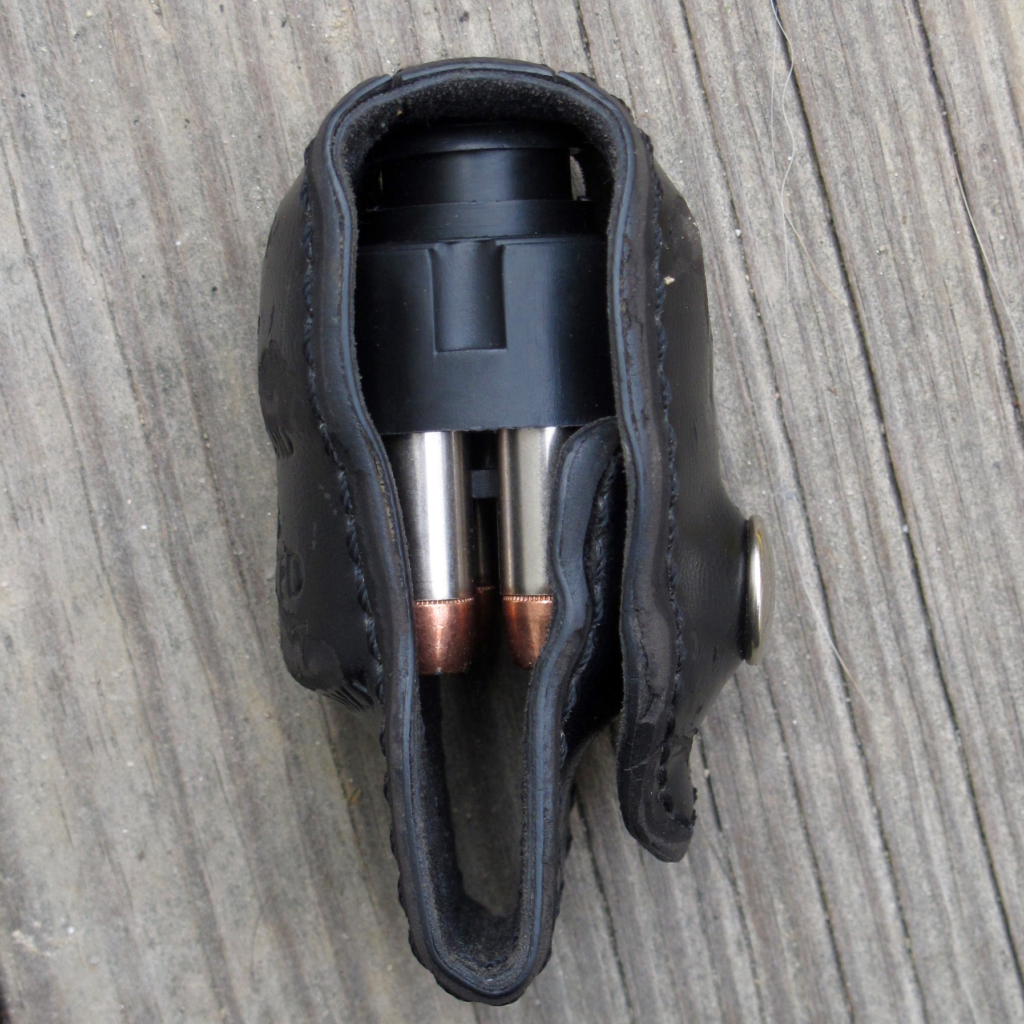 This old design consists of little more than a single piece of molded leather. The leather folds back on itself and is held in place with a single snap. A wide center portion is sized to fit a speedloader, and this is where it really gets neat. The rounds on the speedloader are “split” by the belt. Three rounds sit on the outside of the belt, and three rounds sit inside. This does an excellent job of mitigating the thickness of the speedloader. 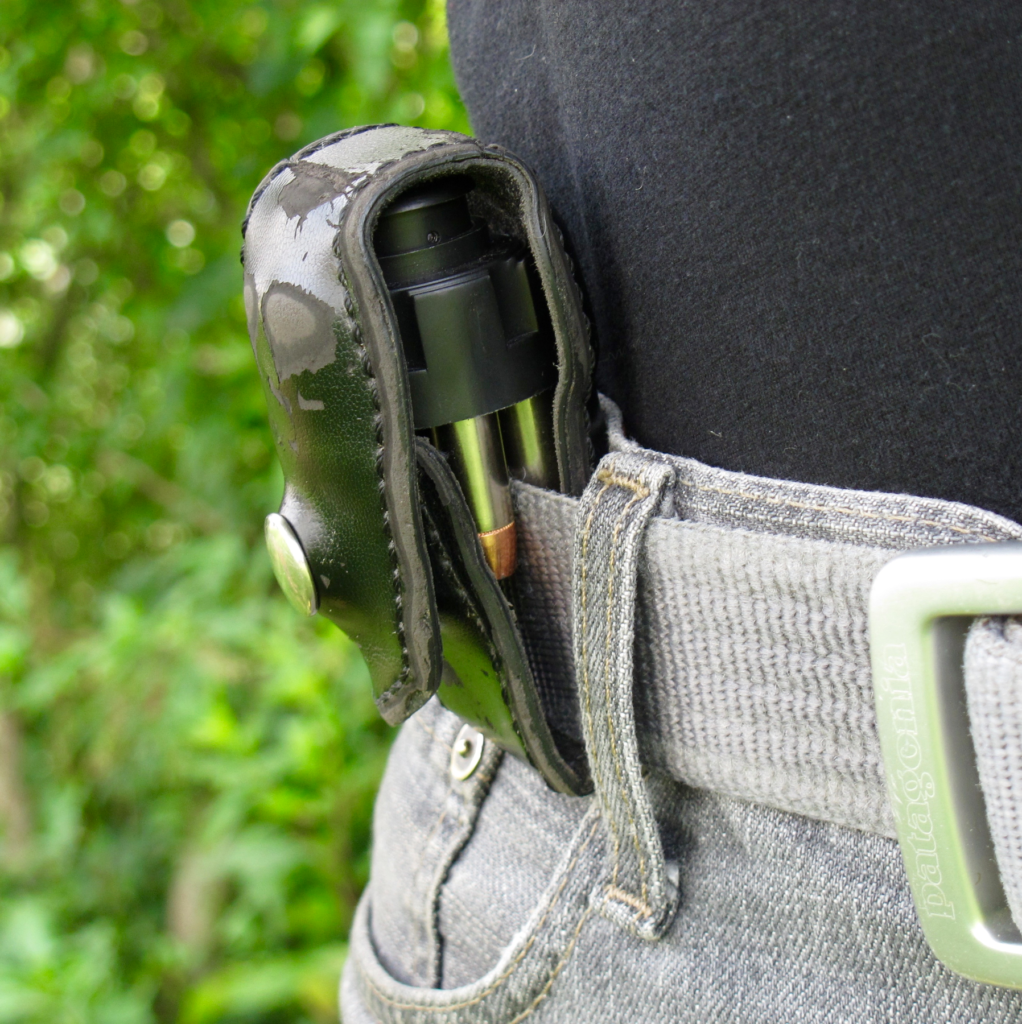 The Safariland Split-Six pouches I picked up fit my L-Frame Comp IIs almost perfectly. Since the sides of the pouch are completely open, this makes grabbing the loader by its body (rather than the knob) extremely easy. On the other hand, being so open creates a problem. The loader isn’t held very securely. Under stress, simply unsnapping the pouch could cause the loader to fall out. Also, the pouches I picked up are made for duty belts, and are a little big for my 1.5″ belt, resulting in a less secure hold than I would prefer. 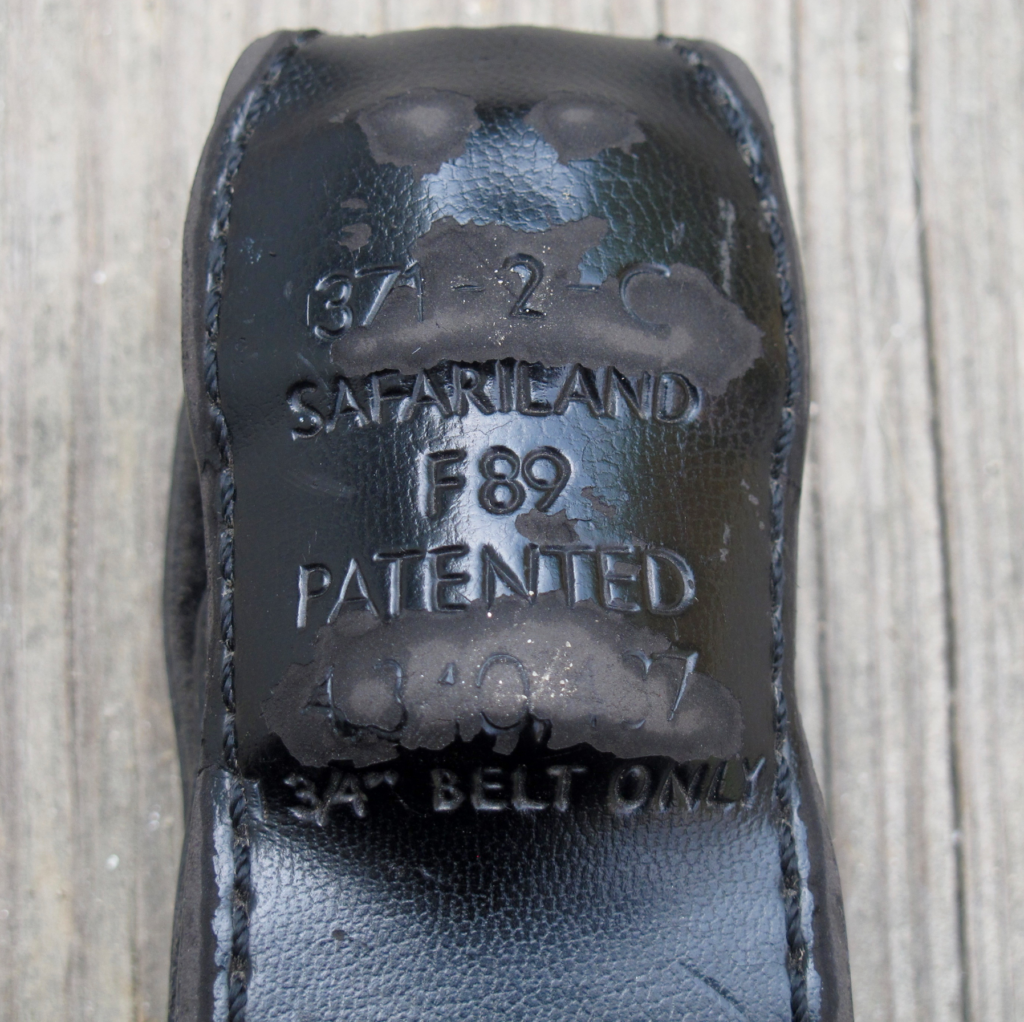 The Safariland Split-Six is a pretty cool pouch, but it could be done better. And it has been, by DeSantis. The DeSantis “Second Six” speedloader pouch is a vast improvement on the Safariland design. The first thing you will notice about the DeSantis model is its abundance of hardware. The additional straps and screws make this model seem a bit busier, but they all serve very valuable functions. 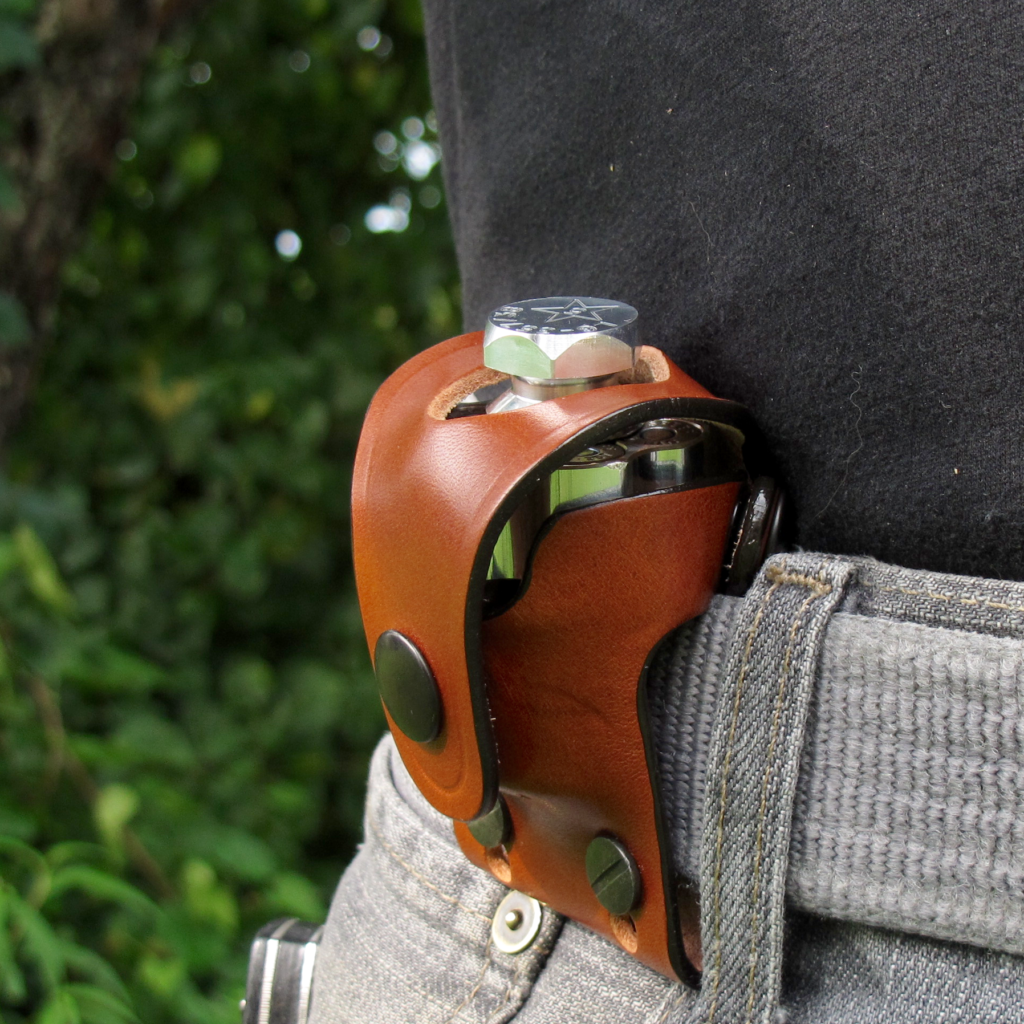 The two snaps at 4 and 8 o’clock on the pouch serve dual purposes. First, they keep the pouch from falling off when you unbuckle your belt. This isn’t an issue with a duty belt, but when worn on a standard belt the Safariland fails here. Rather than a fixed loop, the snaps also let you take the pouch on and off without unthreading your belt. They also serve to support the sides of the loader. I like the security this offers, though it does prevent a completely a perfectly clean grab of the sides of the loader body. 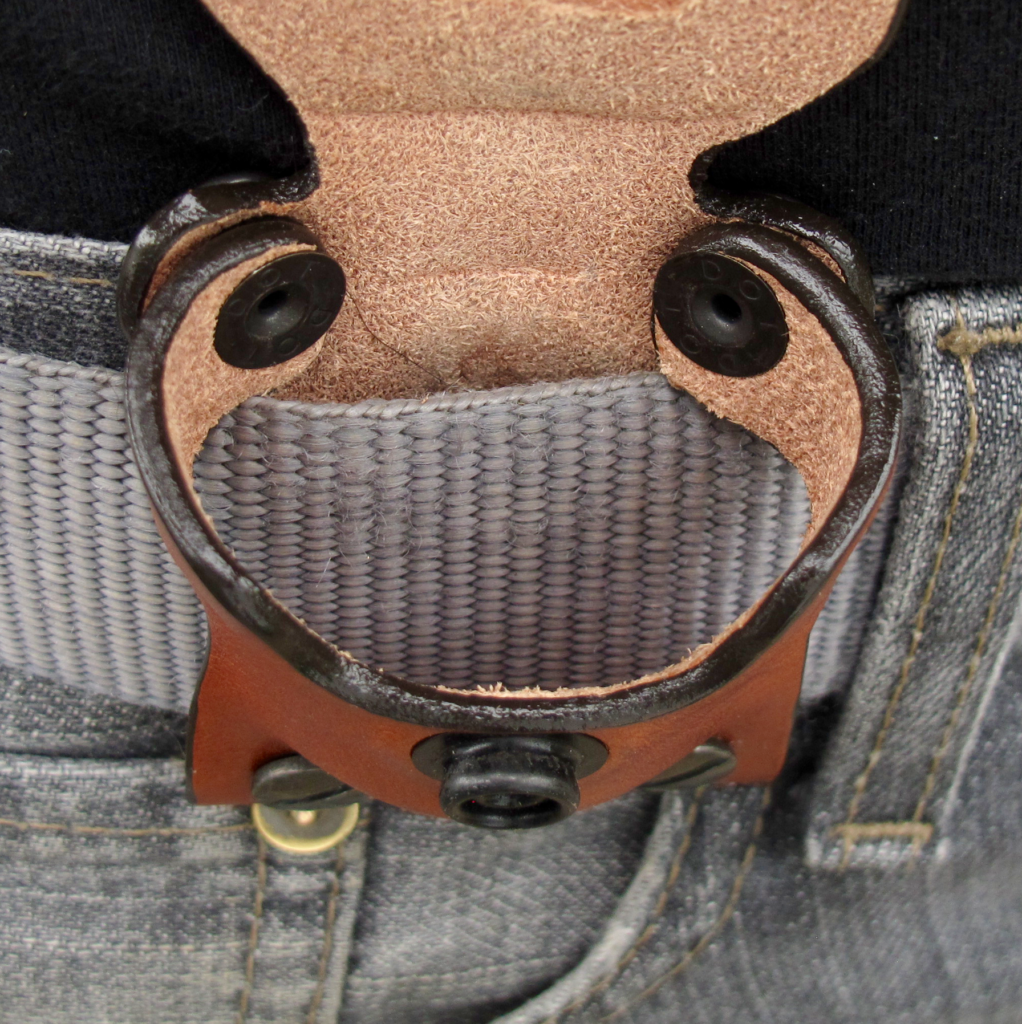 The two screws at the bottom of the Second Six are the real prize. They let you adjust it to fit different belt widths. To adjust for a wider belt simply remove the screws and replace them in the lower holes. This keeps the pouch much more secure than the Safariland model. In conjuction with the two snaps discussed earlier, this holds the DeSantis Second Six pouch much closer to the body, as well. 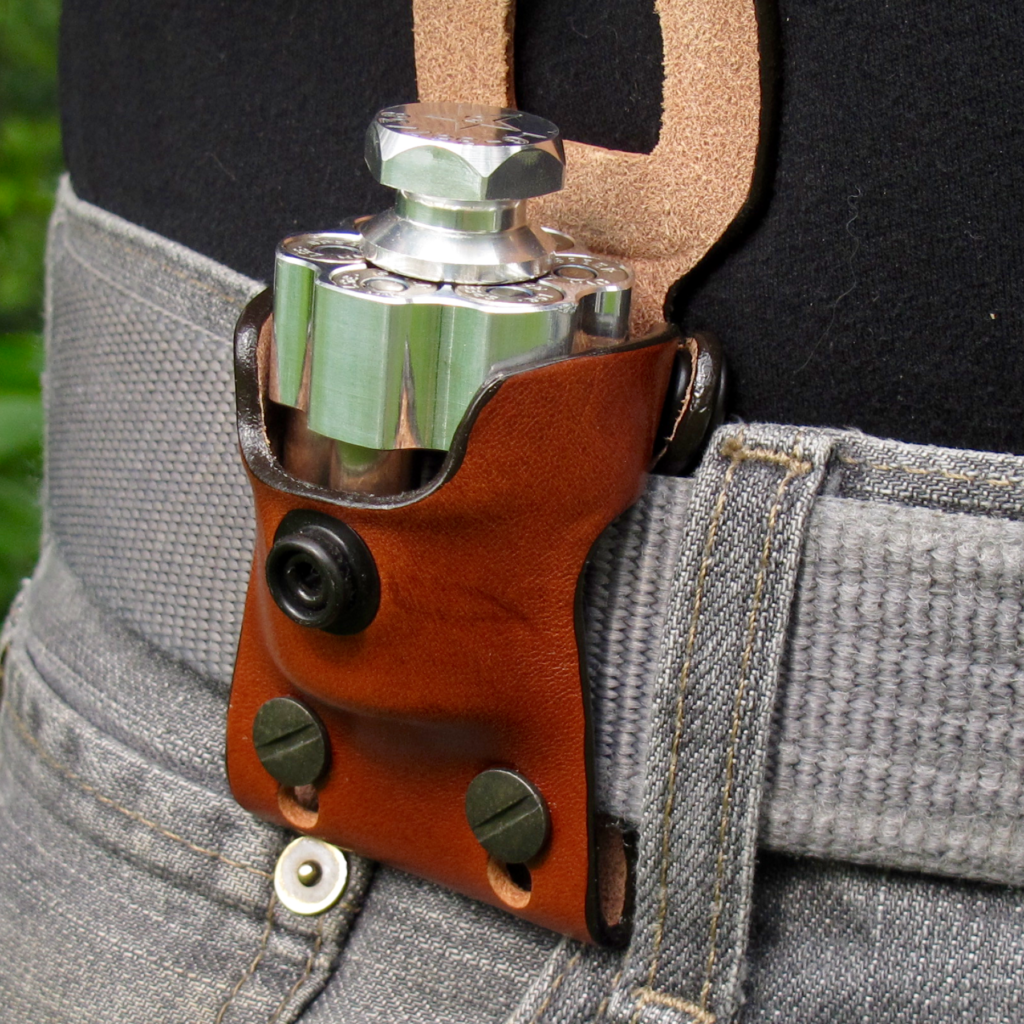 If there’s one thing I could complain about, it’s the big hole in the top of the pouch. This pouch is designed specifically for twist-type loaders like the HKS and the 5-Star Firearms, to the exclusion of loaders like the Jet, SL Variant, and Comp II. Not only does this flap design exlude other, better loaders, I also think the potential is there for the knob to be twisted inadvertently. This doesn’t seem extremely likely but it’s one of those things that I’d be constantly thinking about. 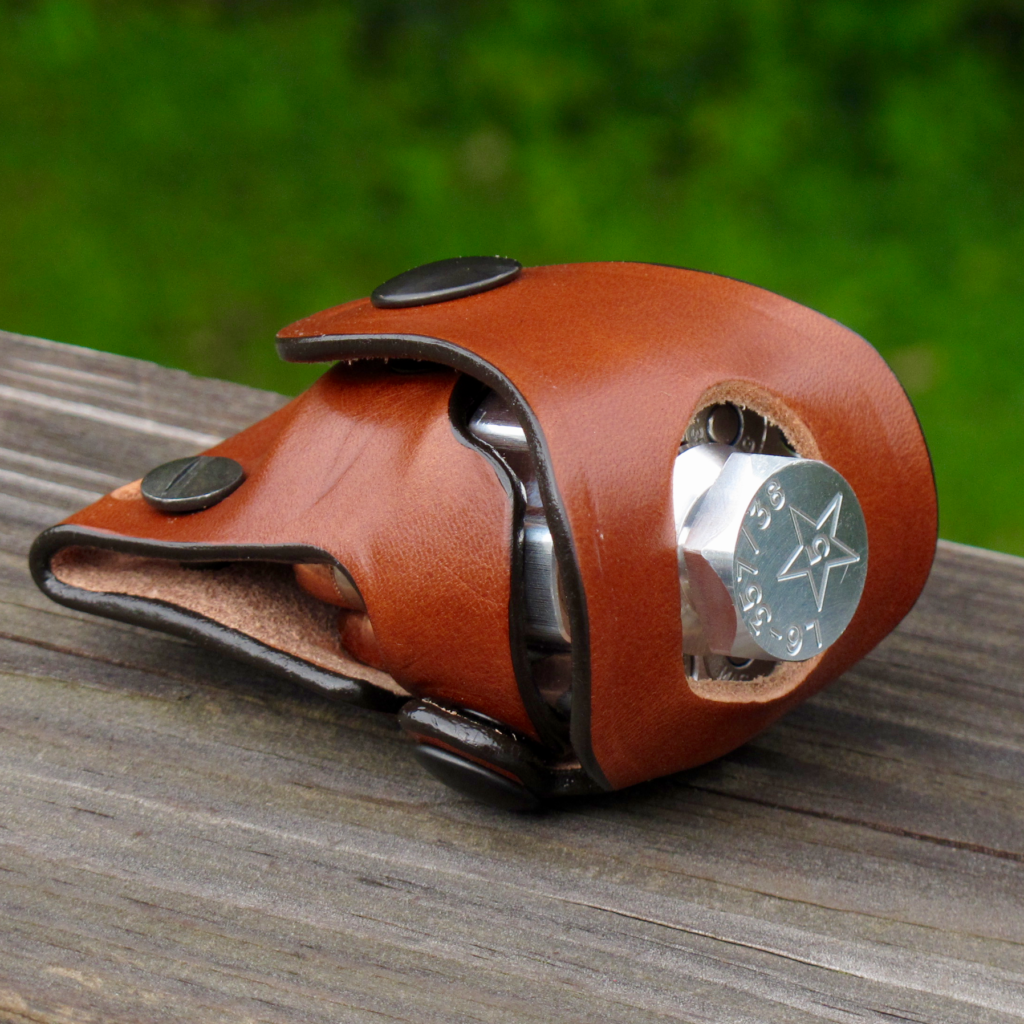 I found that the DeSantis cut a much lower profile than the Safariland. Due to the tighter construction it was held closer to the body. This is a fairly sleek design that conceals a speedloader really well. It also flops around less than the Safariland design.

There is one other thing you should think about if you are considering either of these models. If your belt is very thick you may have problems getting it between the cartridges. This probably isn’t an issue with most nylon belts, but it might very well be with a leather gunbelt.

Generally, I think the DeSantis is the vastly superior design. Unfortunately this is a false choice, as it is dictated by your speedloader choice. Still, the Safariland Split-Six or the DeSantis Second Six pouches are both viable designs for personal defensive use. I wouldn’t hesitate to recommend either one of these. If I end up with a gun that requires me to 5-Star or HKS loaders (the Kimber K6S, for instance) I probably will end up carrying the DeSantis model. In fact, the Second Six is available direclty from Kimber’s Revolver Shop!

For a 20% discount at DeSantisHolster.com, use offer code GAF20. I receive no compensation for the sale of any DeSantis products.