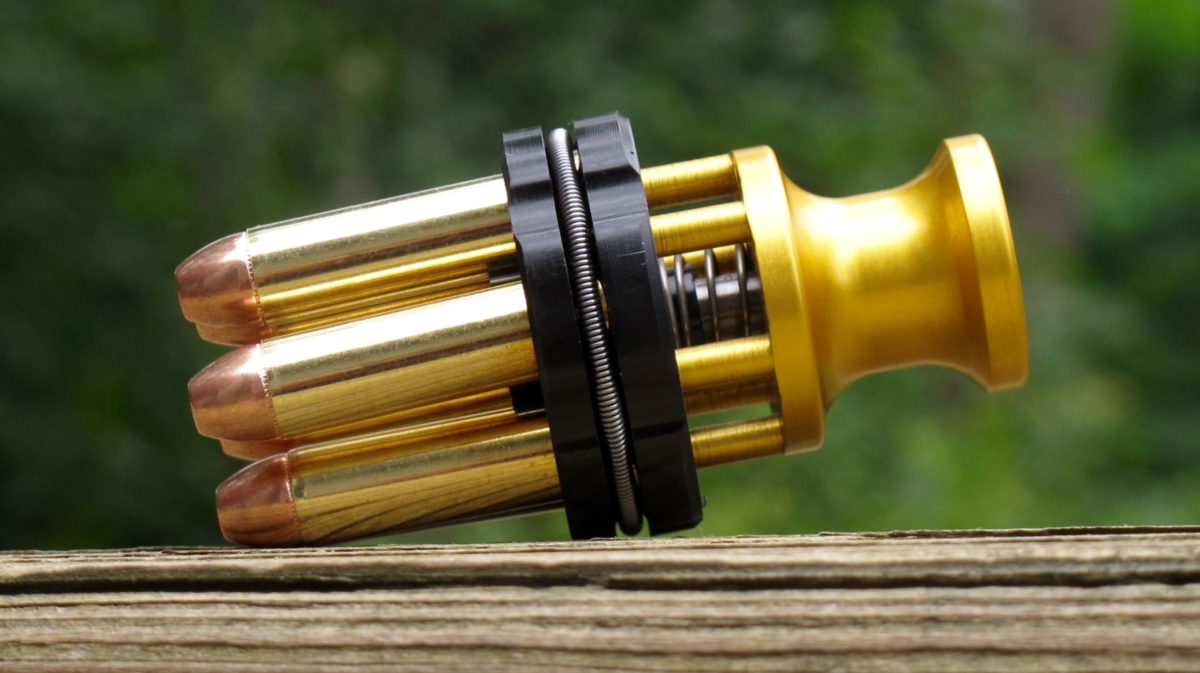 The search for the perfect revolver speedloader continues. I’m willing to try pretty much anything to find that balance of speed, comfort, concealment, and logistical feasibility (cost and availability). This week I am trying the Speed Beez speedloader.

The Speed Beez speedloader design is, at heart, pretty uncomplicated. A plastic cylinder accepts six cartridges that are held in place by a spring wrapped around its exterior. A central knob with a plunger for each cartridge releases the rounds when depressed (actually two of these address opposing edges of each cartridge). It, too, is spring loaded. The center knob is well-machined aluminum and despite its awkward looks, component quality is very high. 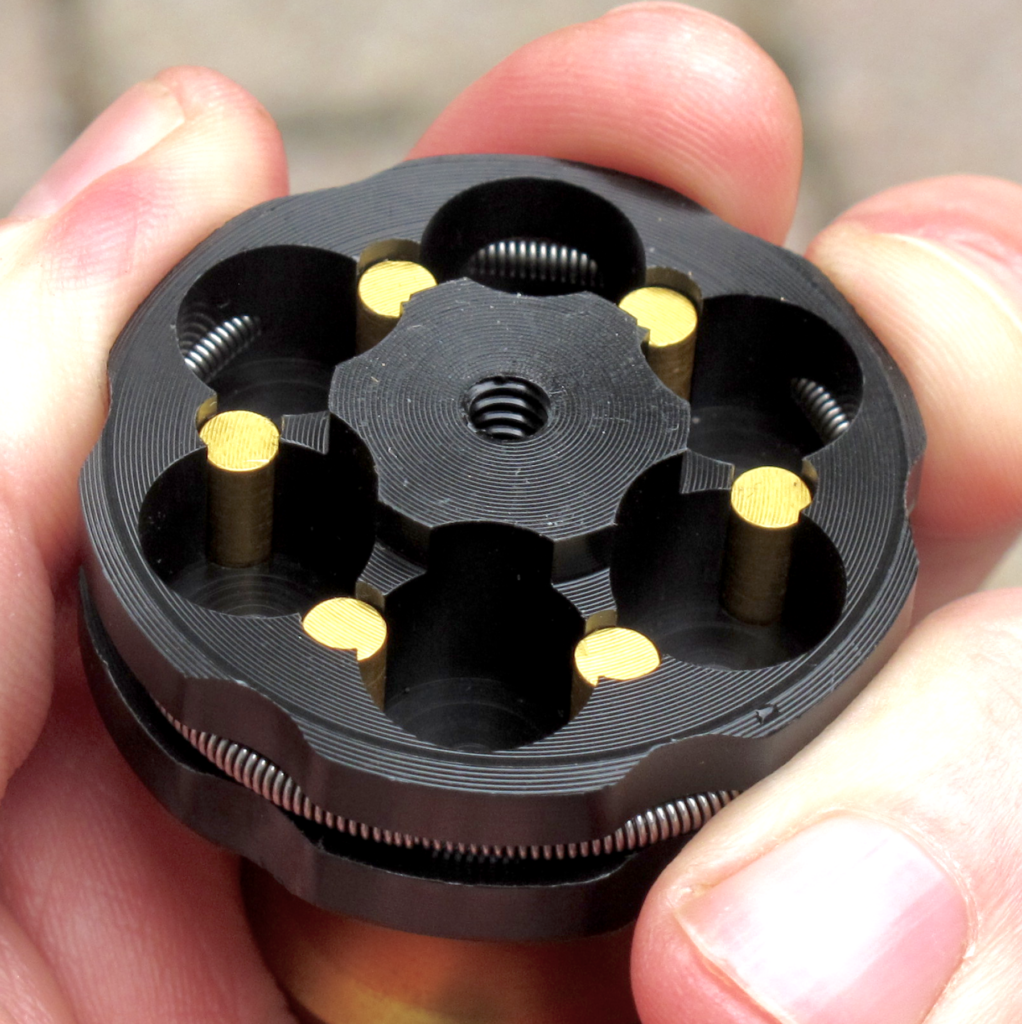 To load it simply invert the loader and press rounds in one at a time. The rim of the cartridge slips past the spring. When the spring rebounds it holds the cartridge in place. To reload your gun align the rounds with the charge holes. When they are adequately inserted depress the knob to expel the cartridges from the speedloader.

Positive Loading: I tend to prefer speedloaders that don’t rely on gravity alone to pull the cartridges into the chambers. This process can be fouled by dirty cylinders or by not getting the gun fully upright, and getting the gun fully upright generally forces the head into a fully downward attitude. Not so with the Speed Beez speedloader. Each cartridge is positively inserted into the chamber via twin plungers. This should overcome even the dirtiest of chambers.

Size: For concealment, large size is generally a bad thing. However, these loaders are about as easy to handle as they come. They are meant to be grasped by the knob, which is ample and offers a positive purchase. This makes it slightly more fumble-free than other loaders.

Variety: Though not quite as robust as the 5-Star Firearms lineup, Speed Beez speedloaders cover a broad array of firearm makes and models. Speed Beez loaders are available for most popular revolvers in .22 (LR and WMR), .38/.357, and .44 calibers.

You guys know that I am a fan of all things high-quality. Well…not all things. I don’t mind paying for quality as long as the item in question works as intended. I have a lot of issues with the Speed Beez speedloader.

Size: This is the first thing you will notice about the Speed Beez speedloader. It is large compared to offerings for similar make/models. This has some benefits as I mentioned earlier, but it also comes with some huge downsides. The loader is very tall – the tallest of all tested so far. I think I could live with this, but it is also very thick relative to other loaders. The thickness of this loader is necessary to fully protect the spring that wraps around the cylinder’s exterior.

The girth creates an issue not only with concealed carry, but also in interacting with the firearm. I tested this loader with my VZ Grips installed, which should have set it up for success. The VZs are the thinnest grips I’ve had on my 686, but I still had issues. The loader would hit the edge of the left panel just enough to misalign the cartridges with the chambers. Though it is entirely possible to get rounds into the chamber, it is not as fast or as easy as it should be. 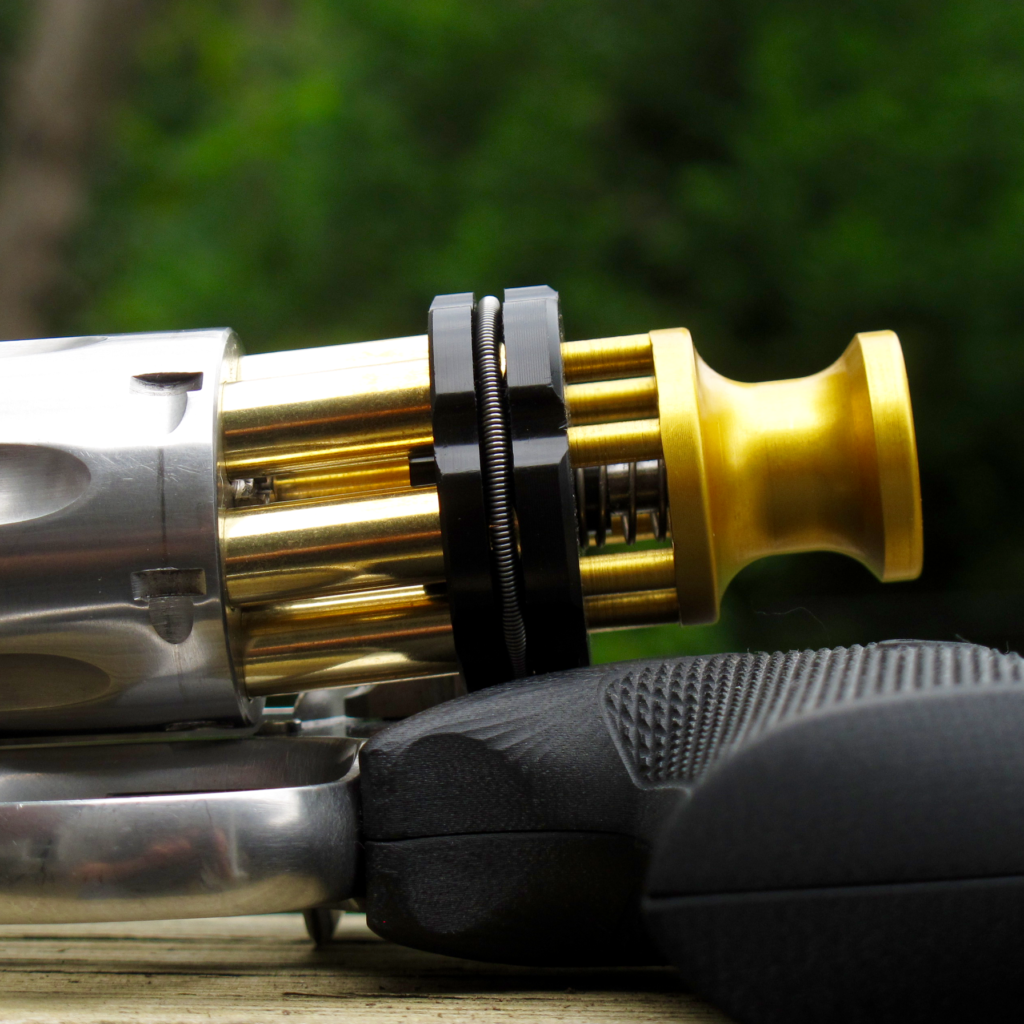 Cartridge Hold: My next complaint about this loader is how securely each round is held. Which is to say, not very. I consistently had problems with one or two rounds getting cockeyed through normal handling; the spring just isn’t strong enough by itself to hold them securely. This creates problems when trying to align bullets with the chambers. Although I didn’t drop-test this model I suspect that like the Dade loader, it is prone to dumping its payload upon impact.

Cost: Aside from the S.L. Variant, these are the most expensive speedloaders I’ve reviewed to date (at around $36/ea.). I could almost purchase three Jet Loaders for the cost of two Speed Beez loaders, and the Jets have big advantages over the Speed Beez models.

There is one other gripe I have with this loader. Look back at the second photo in this article. You’ll notice that there is a hole in the portion of the loader that interacts with the cylinder pin. This hole is to keep the loader aligned with the cylinder, and most loaders will have an alignment hole like this. The problem with this one is that it’s too deep.

What this means in practice is that you have to lift the loader off of the cylinder pin after you reload. This might not seem like a huge deal, but after months of working with the SL Variant, JetLoader, and Comp II, it is. With those loaders you can simply release the loader from your grasp and close the cylinder. It will be pushed aside and fall away. Several times during my testing the Speed Beez speedloader would hang up on the cylinder pin, forcing me to lift it. Though the distance is slight, this requires time and a discrete motion to accomplish, and I don’t like it.

I hate to say this, but I have a lot of criticism for the Speed Beez speedloader. It seems to have been optimized for competition. I would like to see a version that is intended for concealed carry and more along the lines of the Dade loader to which it owes its heritage. Another big benefit of the Dade that did not transfer to the Speed Beez is the depth to which the cartridges are seated in the loader. This helps keep the cartridges in line. The Speed Beez seems to have a rather tenuous grasp on the rounds, as mentioned above. 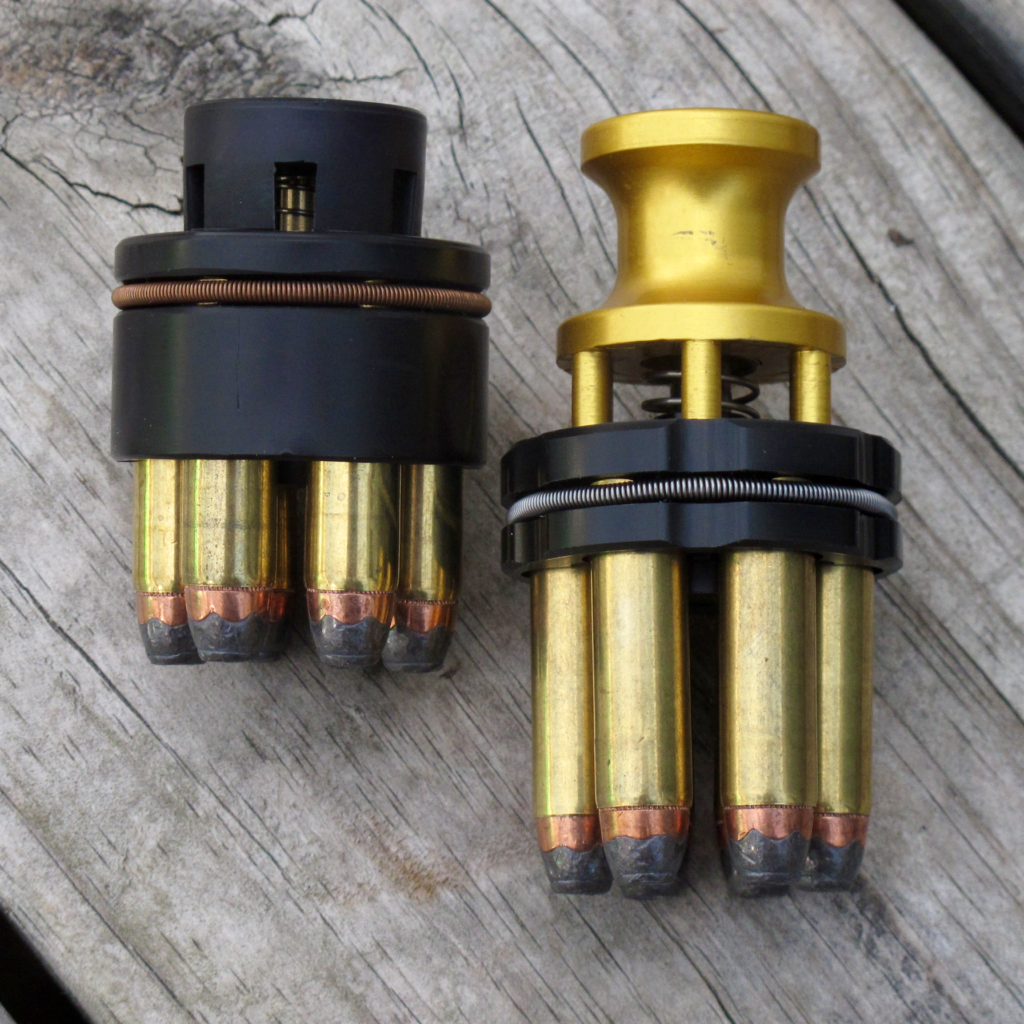 There are plenty of better options out there. For my money, the Speed Beez speedloader would come in close to last because of its size, cost. If my options were a 5-Star loader or a Speed Beez, I’d take the 5-Star all day long.