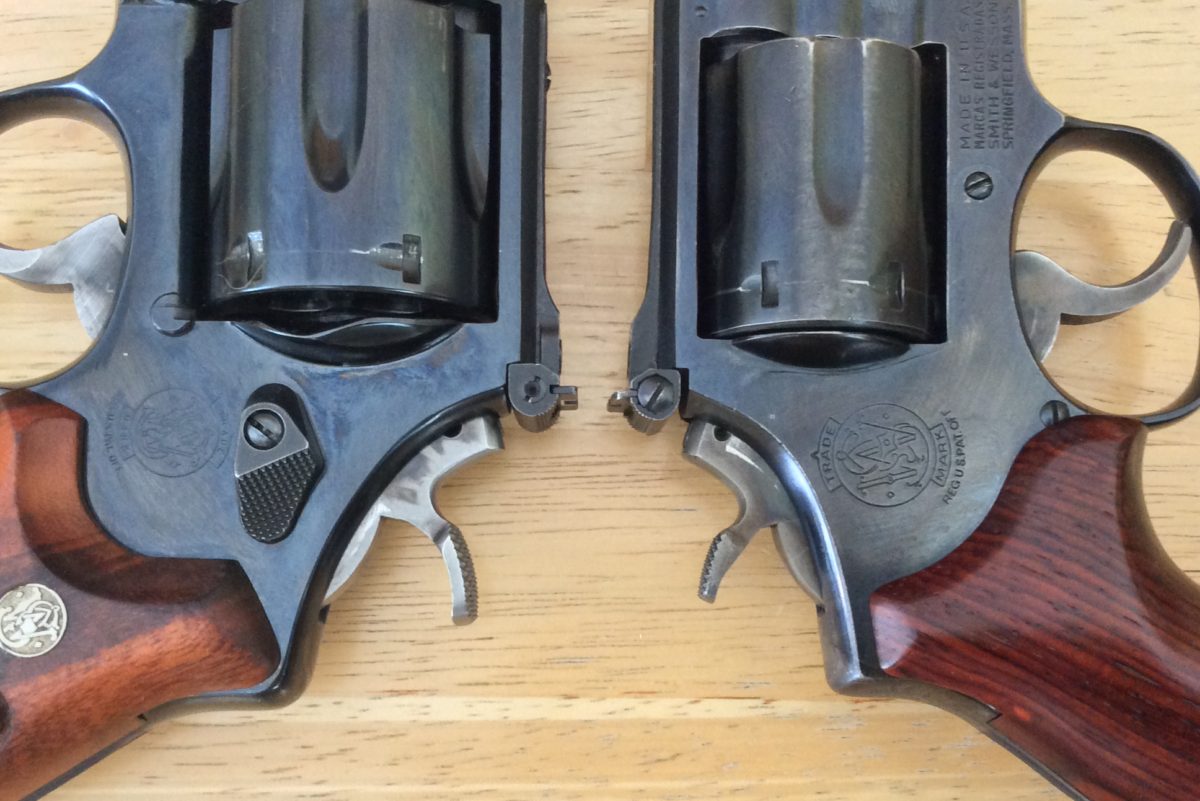 Back when the revolver was King, wheelgun shooters and manufacturers paid attention to details that are sometimes overlooked today. A great example of this, is the host of trigger and hammer options that were available back when sixguns still filled most of the duty holsters and won most of the matches.

Consider the hammer on a double action revolver. While we’re not used to thinking of it as a menu item, there was a time when manufacturers such as Smith & Wesson offered several variations to choose from, based on the shooter’s needs.

If you were a target shooter, perhaps competing in the popular PPC or Bullseye matches, it was important for you to have a hammer with a spur that made it easy to cock the weapon. Since single action fire was a big part of these competitions, shooters wanted a hammer spur that was easy to reach and grip with their thumb. As a result, “target” hammers with longer, turned down spurs and large pads were favored, and offered by manufacturers on the models that competitors preferred.  These hammers also showed up on hunting guns as well, since it was assumed that almost all shots in the field would be fired single action.

Alternatively, if you were a military or police shooter, you had slightly different needs. Although it might surprise some of the younger RevolverGuys in the audience, single action fire was still popular in many military and police circles up through the late 1960s to early 1970s. However, the oversized target hammers favored by competitors could easily get hung up on clothing or equipment as the weapon was drawn from the holster (and possibly even from concealment), so a hammer spur with a more streamlined shape and reduced size was better suited for service use.

The same concept applied to triggers.

The single action competition shooters benefitted from having wide, flat faces on their triggers, which maximized contact and enhanced the ability of the fingertip to push the trigger straight to the rear for the best X-count. To ensure that the fingertip didn’t slip as the trigger moved (thereby disturbing sight alignment) it helped to machine grooves into the face of the trigger. Target triggers with these features were featured on all the best competition guns from the major makes.

The target triggers were pretty lousy for double action work, however. The wide, flat, grooved trigger face works great if your contact point is the fingertip, but if your contact point is the distal crease of the trigger finger, then you need a different shape for the best performance. When you’re putting the “power crease” (as my friend Mas Ayoob calls it) of the finger on the trigger, you need a narrow trigger face for best control and comfort.  Also, having a rounded and smooth trigger face will allow your trigger finger to “slide” across the surface as it’s stroked to the rear.  As such, the service guns carried in duty holsters back then were frequently equipped with very different triggers than the target guns.

In the good old days of yore, manufacturers like Smith & Wesson anticipated the roles that their guns would be used in, and equipped them with hammers and triggers that were most suitable for the mission. However, customers (and particularly agencies, which ordered large batches of guns) could special order parts like hammers and triggers from a menu of choices, to equip the gun the way they wanted it.

In example, fixed sight guns with shorter barrels (such as the ubiquitous Model 10) often wore “service” hammers and triggers, while the long barreled guns with target sights were equipped with “target” ones.

Using the Smith & Wesson K/L-series guns as a baseline, here’s a look at how the different types of hammers compared to each other:

Similarly, here’s how the different K/L-Frame triggers compared to each other:

The dimensions for the larger N-Frames or smaller J-Frames differed, but a similar menu of choices awaited the owners of those firearms.

No soup for you!

We don’t have the range of hammer and trigger choices today that our grandfathers once had. In today’s market, the manufacturers usually make the decision for you, and there are few (if any) options if your tastes run different. Sometimes, all the guns in a given frame size are equipped with similar parts, with compacts getting “service” parts and the heavy frames getting “target” parts.

The days of mixing and matching have pretty much gone the way of deep blue polishes, forged steel action parts, pinned barrels, and recessed chambers. It’s a shame, but it’s also an opportunity for someone to jump into the market and fill the gaps.  In the modern age of computer aided design (CAD) and computer numerical controlled (CNC) machining, there’s still hope that a motivated entrepreneur will give us RevolverGuys some extra choices.

A RevolverGuy can dream, can’t he?