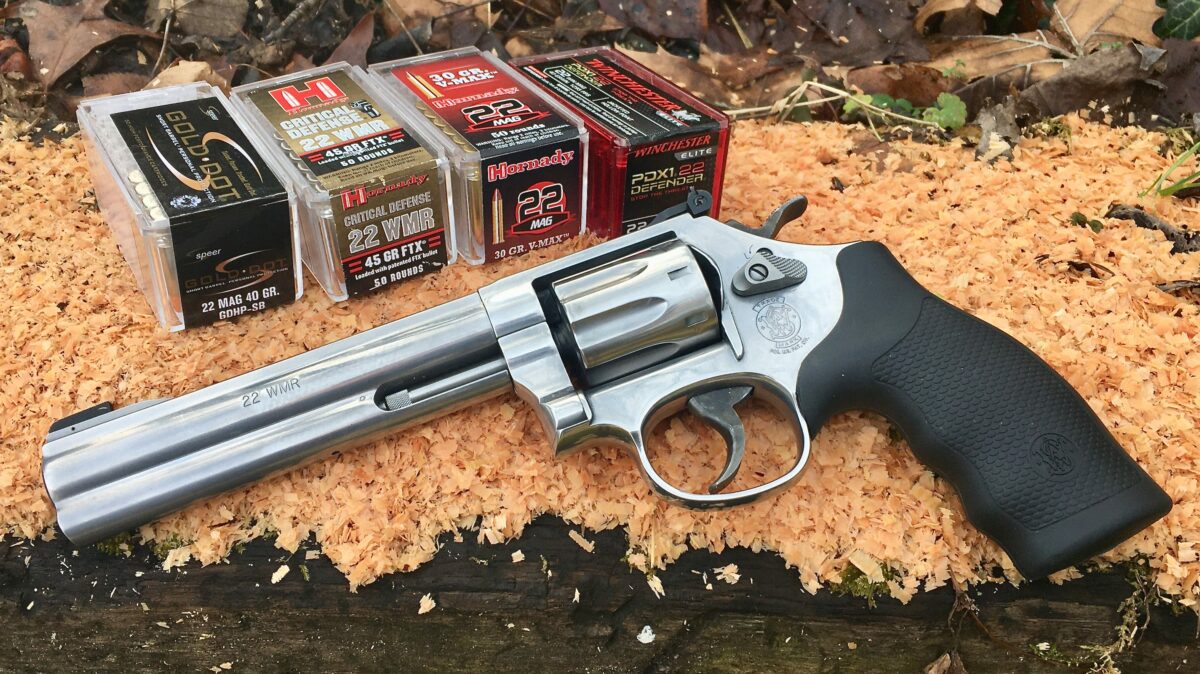 It’s nice to occasionally be reminded that life can still pleasantly surprise you. When I went to my FFL to pick up a couple of T&E revolvers, I had no idea there were not one but two revolvers from S&W waiting for me. I was also surprised at how studiously my girlfriend observed the three stainless wheelguns on the counter, and how before I even began filling out the 4473 she asked, “can I shoot this one?” Finally, I’m most surprised at how much I just like the S&W 648-2, even though it doesn’t fill any “need” I have, real or imagined.

Smith & Wesson’s newly (re)introduced Model 648 is a .22 WMR revolver built on the medium-sized K-frame. As indicated by the the “6” in its nomenclature, construction is of stainless steel. Unlike the previous version of the 648, the 648-2 is an 8-shooter. Let’s take a closer look at the details of this gun. 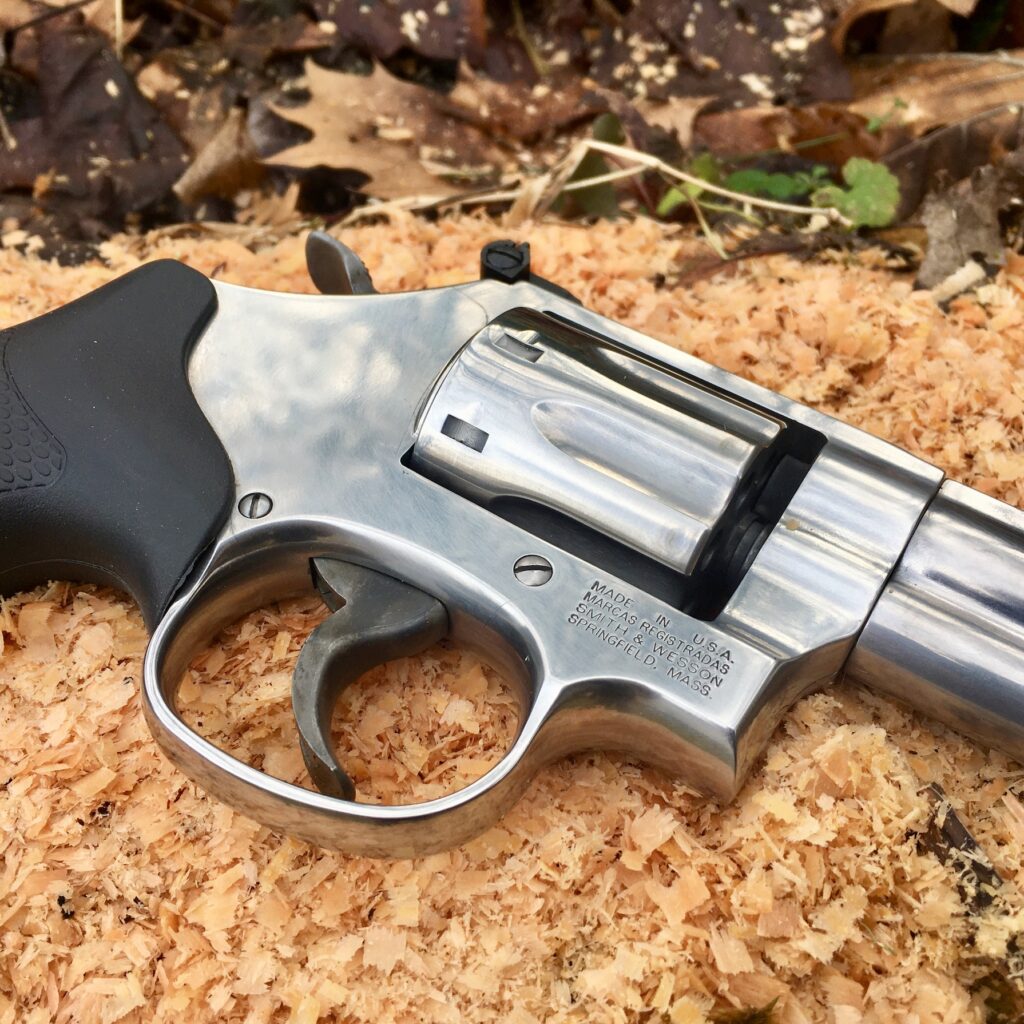 The barrel on the 648-2 is six inches in length, and only available in this length. The heavy barrel also features a full-length underlug, the combination of which – and absence of only a tiny amount of metal to create the little .22 bore – renders the barrel an incredibly sturdy affair. It adds a good deal of weight to the gun, and results in a muzzle-heavy feel. Though I feel it would be appropriate on a revolver marketed as a target gun, the muzzle crown is not recessed. The top of the barrel is serrated to cut glare, and bears a pedestal for the pinned front sight blade. 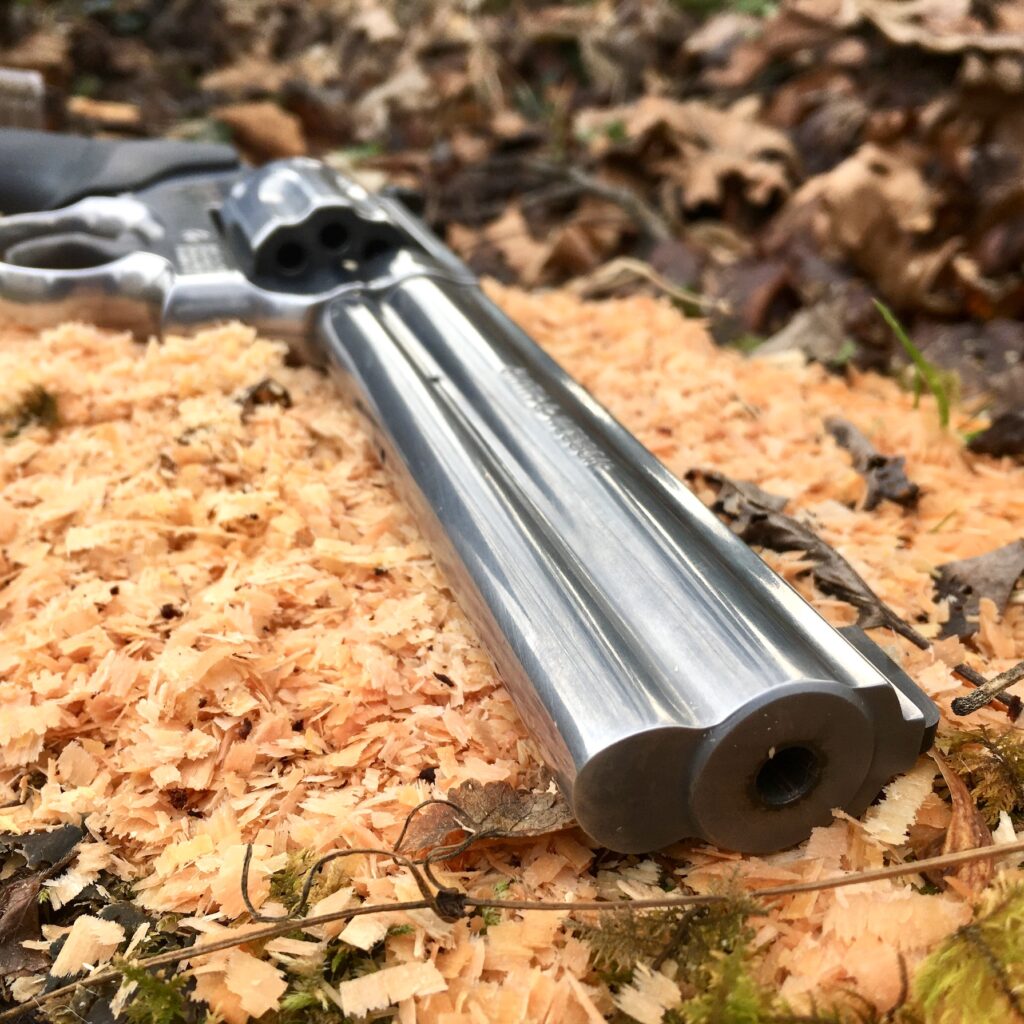 The barrel blends smoothly in to the gun’s medium sized frame. The top of the top strap is subdued, again to cut glare. The top strap also houses an adjustable rear sight which I will discuss more in just a moment. The frame window seems just a bit longer than I’m used to, with a beefy forcing cone jutting out to meet the cylinder. The frame’s left side has the standard accoutrements: the cylinder release, S&W’s factory logo, and of course, The Lock. The Lock not withstanding, this is one elegant looking revolver. 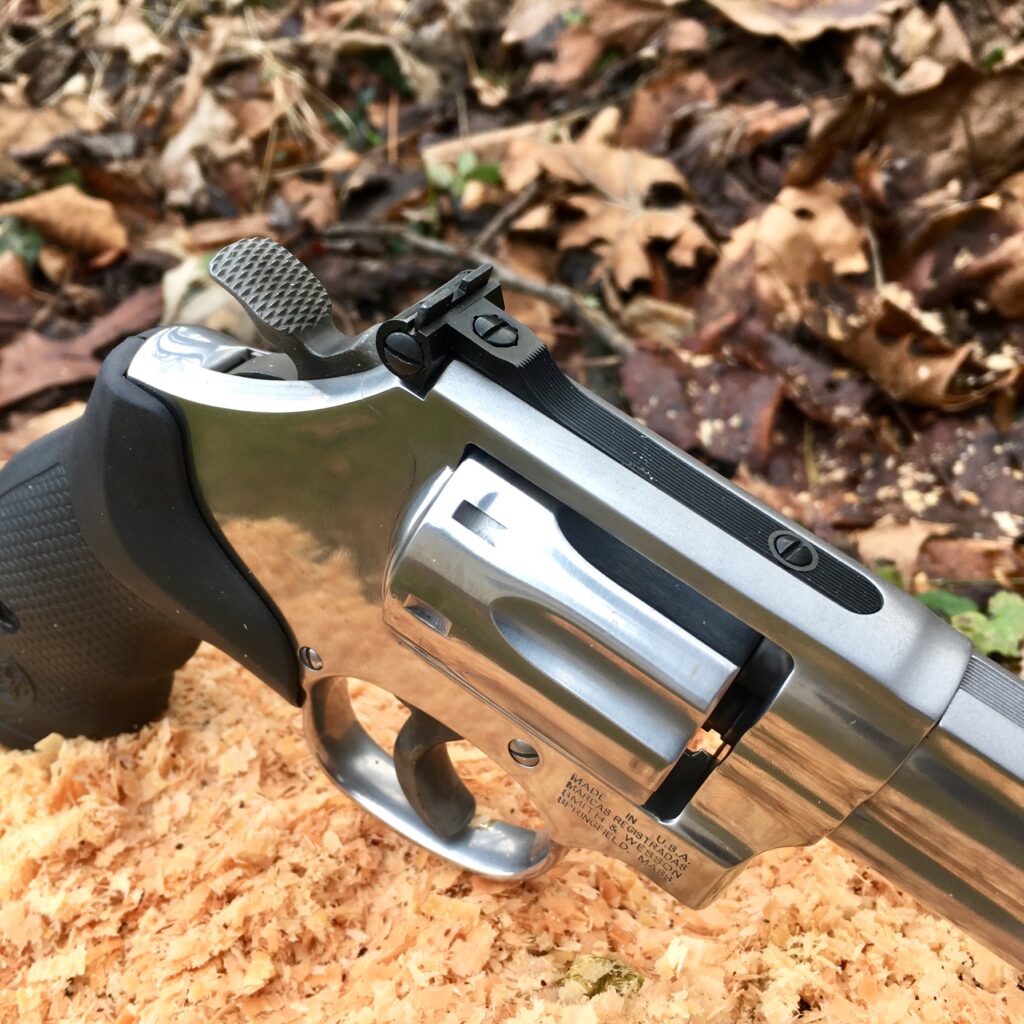 The fluted cylinder has eight tiny, recessed holes, and spins smoothly. The ejector rod provides sufficient throw to almost completely clear the long, .22 Magnum brass from the cylinder. I didn’t measure the ejector rod’s throw. This gun is not suited to lightning-fast reloads anyhow; I will explain why in the section on reliability. 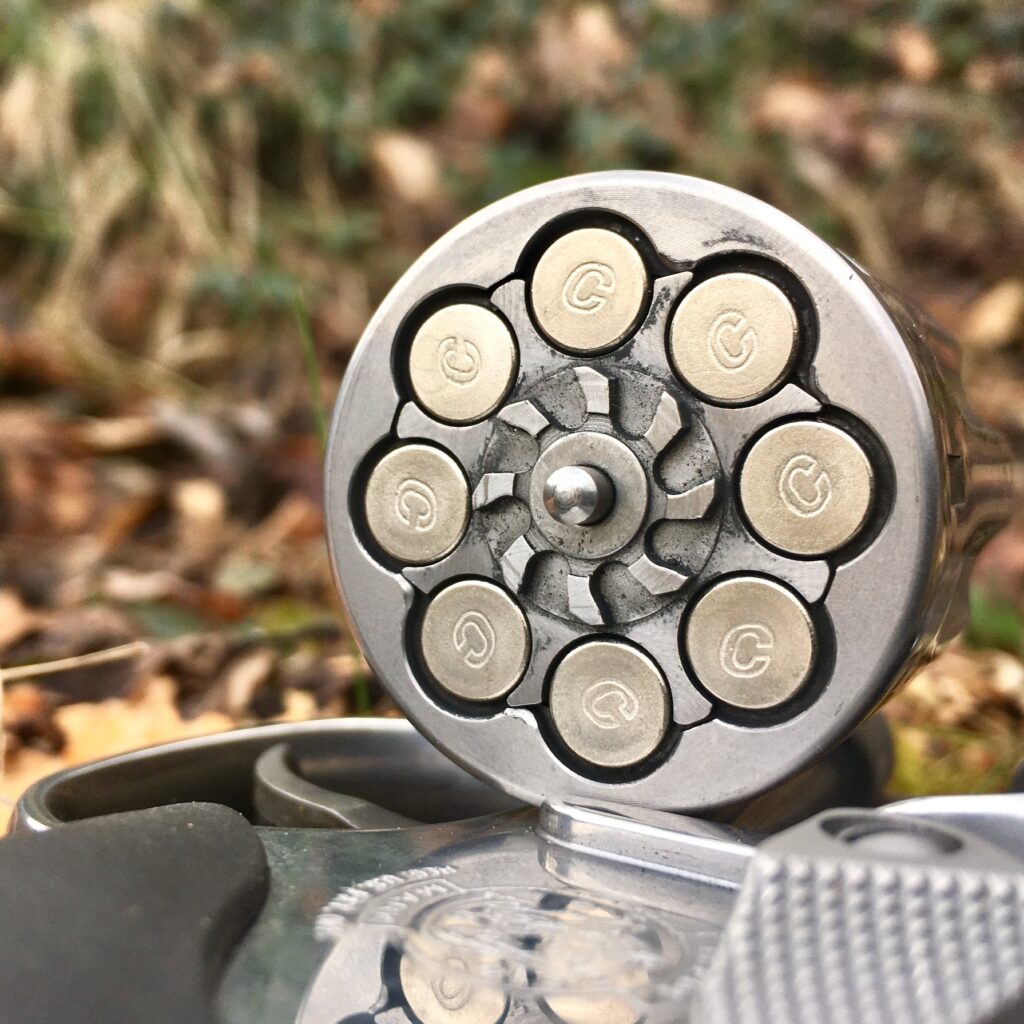 The grip is S&W’s now standard finger-grooved rubber grip. I didn’t care for this grip at all on the larger, N-Frame 610. On the smaller K-Frame I actually liked it. It provided a perfect diameter for my hand, and the grooves are so mild that they don’t interfere with a solid grasp. 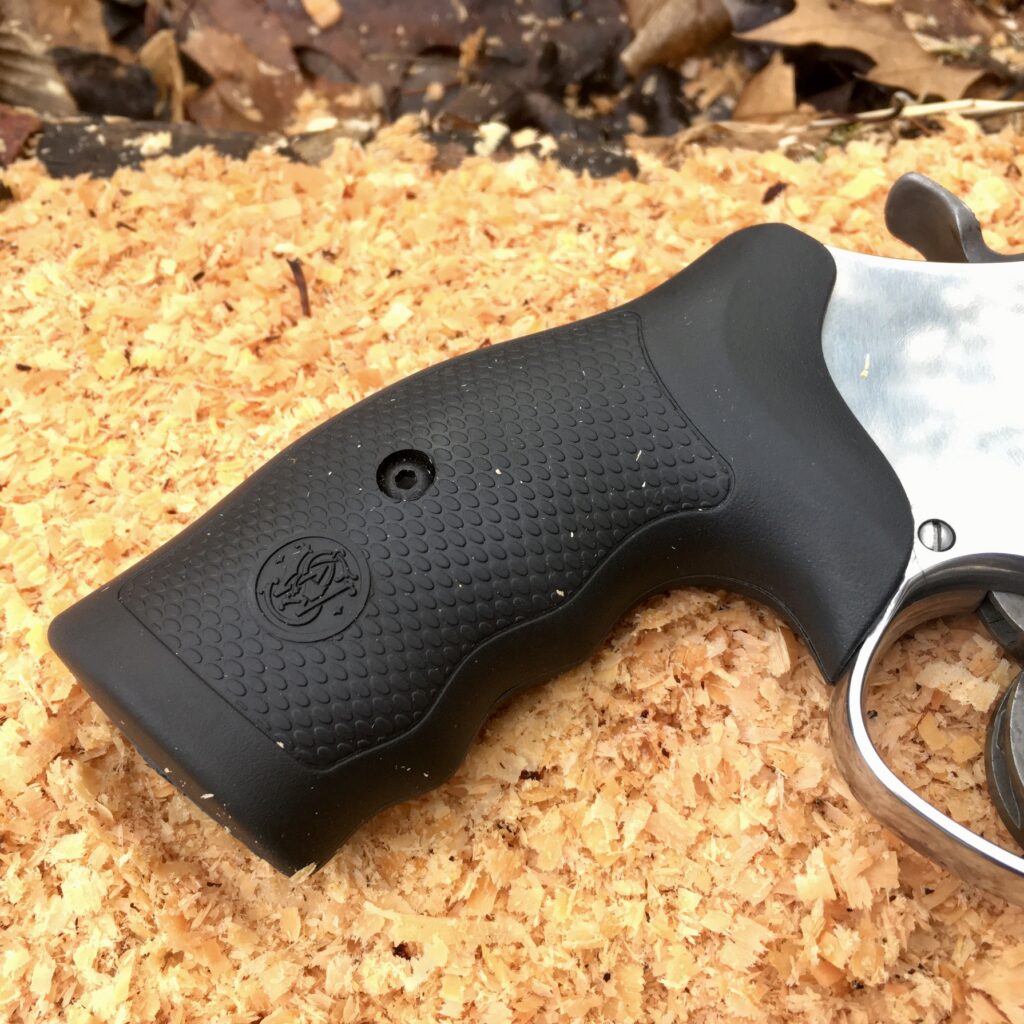 The trigger itself isn’t bad, being a wide, smooth design. The trigger pull on the other hand, was a little much for my taste. I measured half a dozen pulls on my Timney trigger pull gauge. The average double-action pull was 13 pounds. That’s quite a heavy trigger, and par for the course with rimfires. Still, even the 648’s trigger was not quite heavy enough to completely eliminate ignition failures. 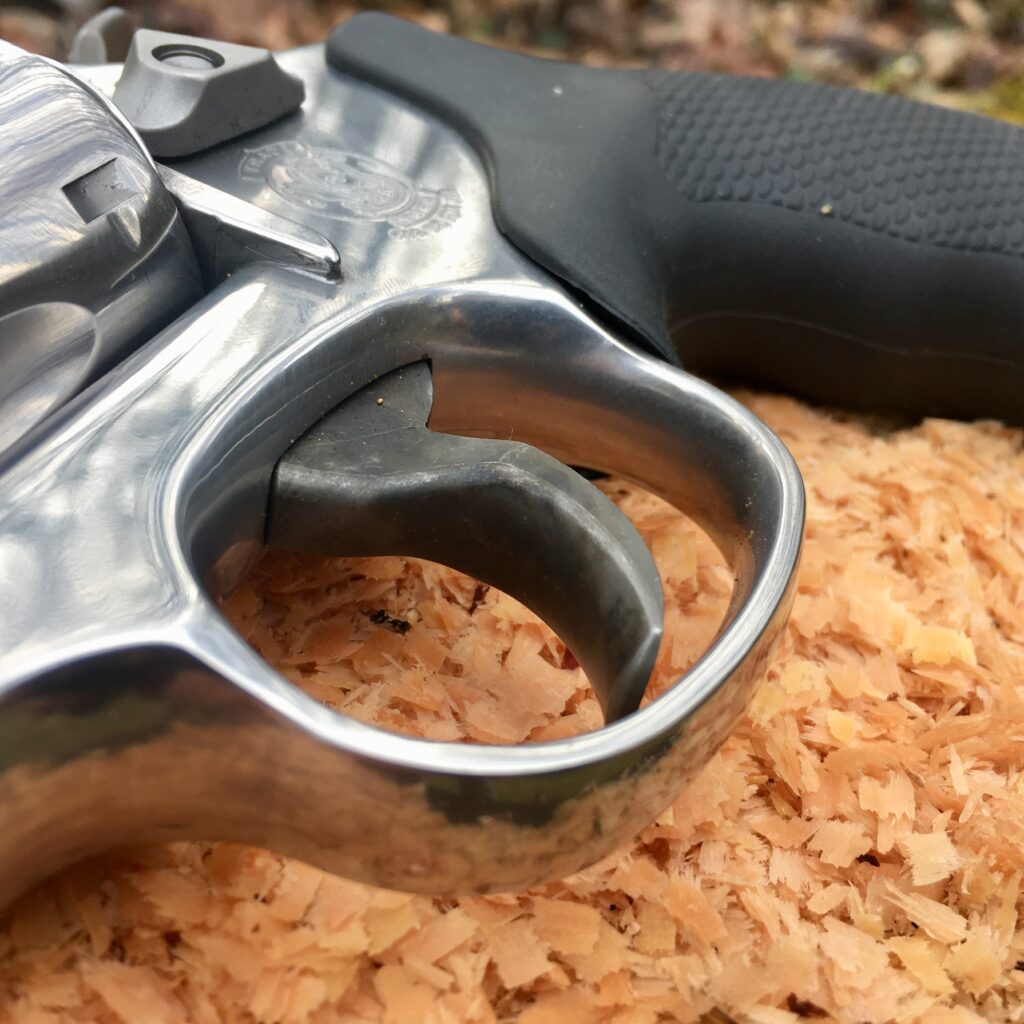 The single-action pull was quite a bit more friendly at 4.5 pounds. The target-style sights, long barrel, and rimfire chambering seem to lend themselves to “target” shooting, so I availed myself of the 648’s wide hammer from time to time. Though I shot this mostly in double-action, the heavy pull made single-action shooting especially attractive. The single-action trigger breaks extremely cleanly, as seems to be a trend with the three recent S&W revolvers I’ve had my hands on this year. 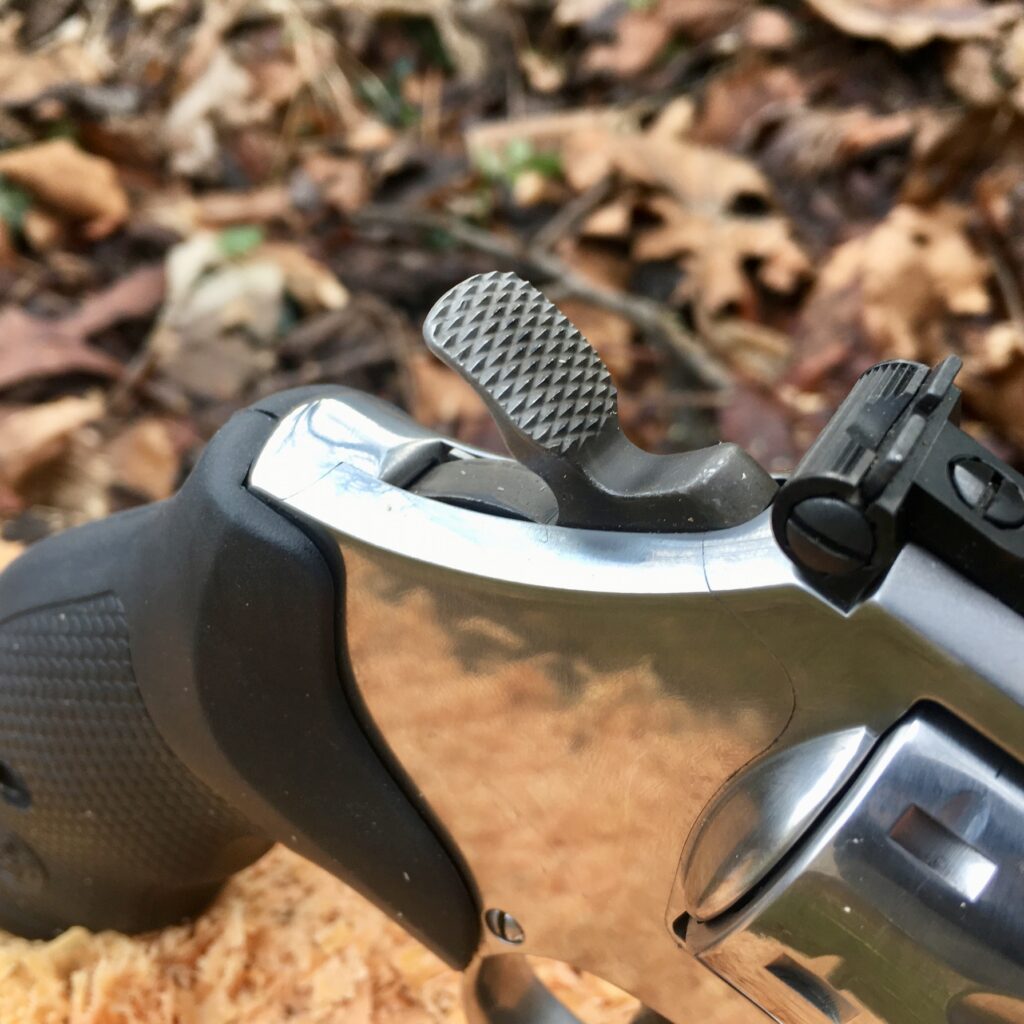 I can’t possibly say enough good things about the sights on this particular revolver. At the same time, there isn’t a whole lot to say about them. The rear sight is S&W’s standard adjustable rear. The rear blade lacks a white outline for plain black-on-black sight picture that suits me just fine. 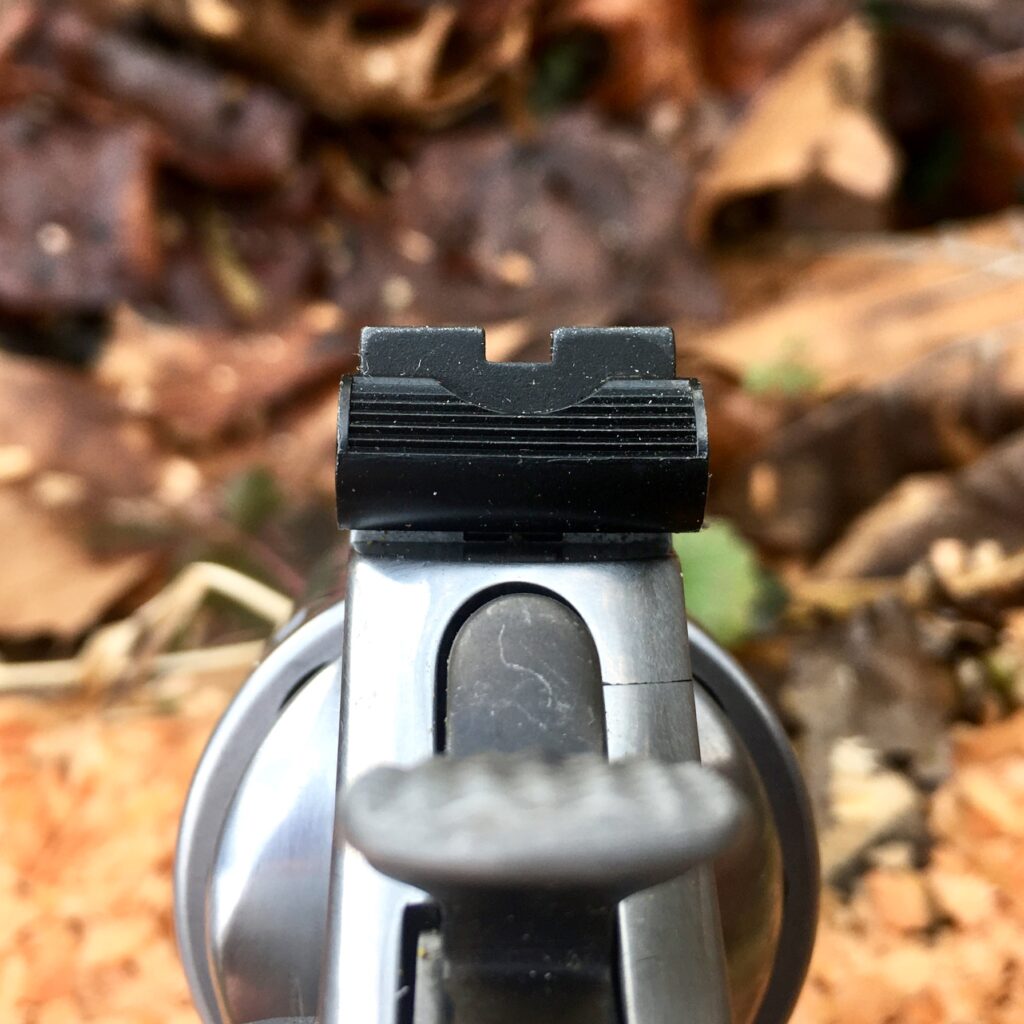 The front sight is a plain black, sharp, patridge-style blade. Combined with the rear sight these presented an excellent, fairly fine sight picture that I very much enjoyed. This combination, coupled with the single-action trigger, made some eye-popping accuracy possible. 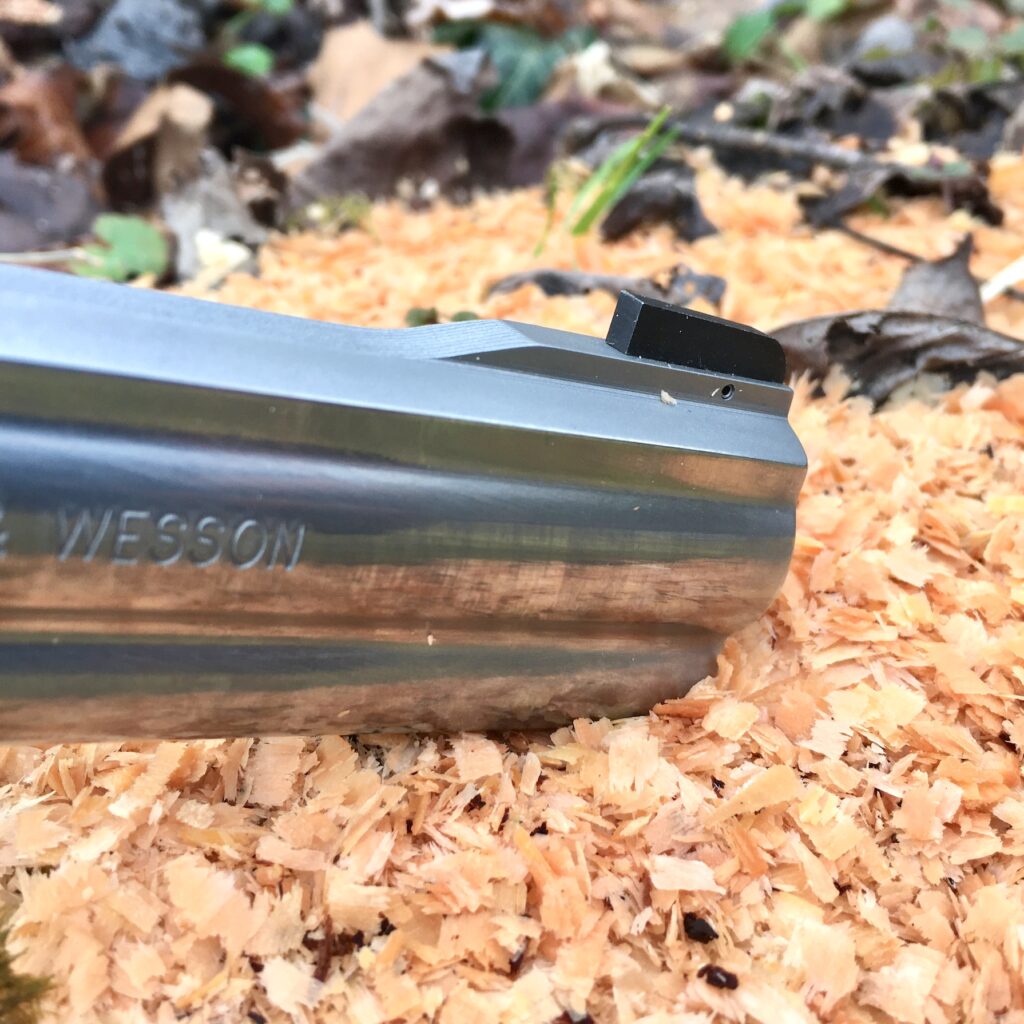 During the evaluation of the S&W 648 I fired 407 rounds of .22 WMR over nine range sessions. Of these I fired seven different loads from CCI/Speer, Federal, Hornady, and Winchester. Since I tend to skew every firearm toward a self-defense purpose, I tended to favor the dedicated defensive loadings from Hornady, Speer, and Winchester.

The more I work with modern S&W revolvers, the more impressed I’ve become with them. The accuracy from the S&W 648 was phenomenal. Chewing rat-holes at 15 yards was flat-out easy, a feat doubtlessly owed to the heft, extended sight radius, excellent sights, and superb single-action trigger.

And speaking of the single-action trigger, I decided to shoot groups for record in single-action. Since the 648-2 isn’t primarily a self-defense revolver this seemed acceptable to me, though I still fired groups offhand. The first for-record group I fired was with Speer’s 40-grain Short Barrel Gold Dot hollow point. This load came in at an unbelievable 1 1/2 inches – a size I was unable to duplicate with any other load. 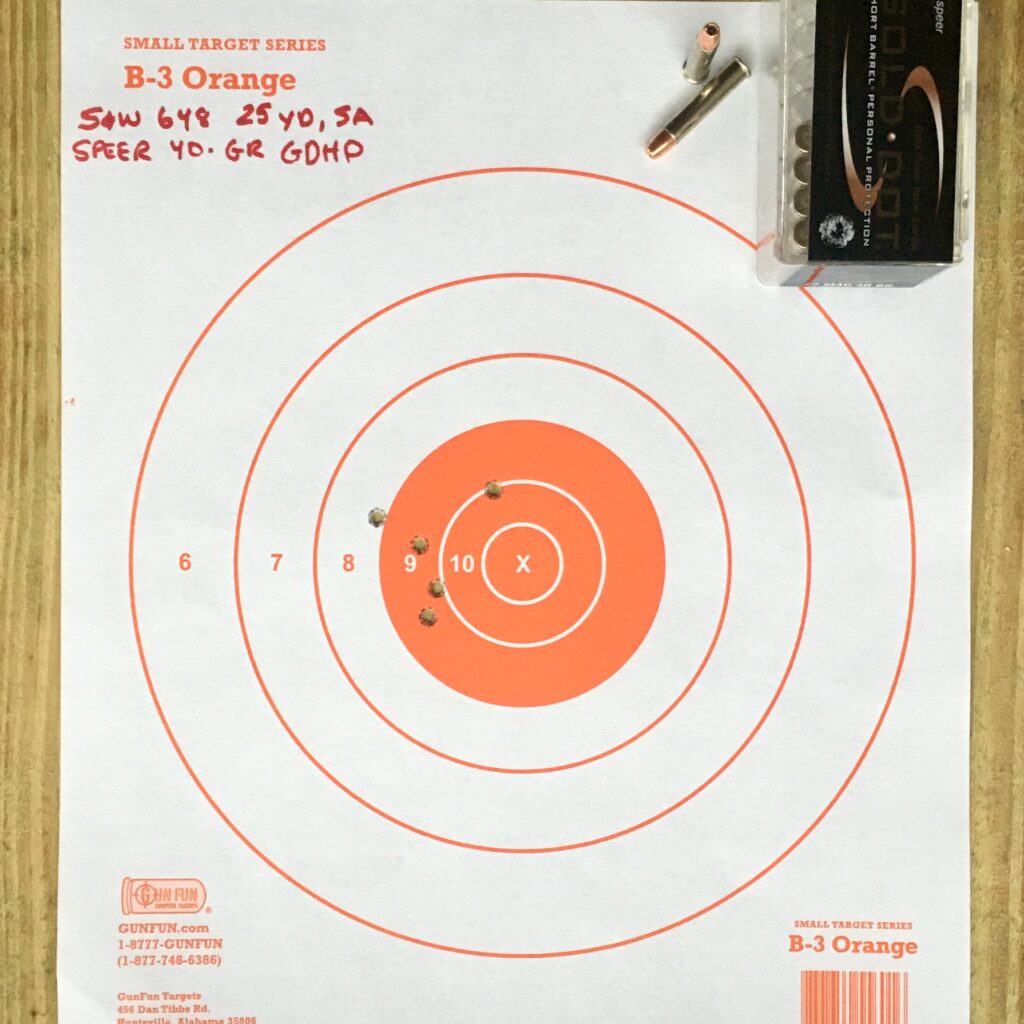 Just for curiosity, I decided to try the same load at the same distance in double-action. The group itself isn’t much to look at, but it is instructive. It illustrates the weight of the 648s trigger much better than I could with words alone. Not only does the group more than double in size (3 1/2″), it also strings vertically and to the left. 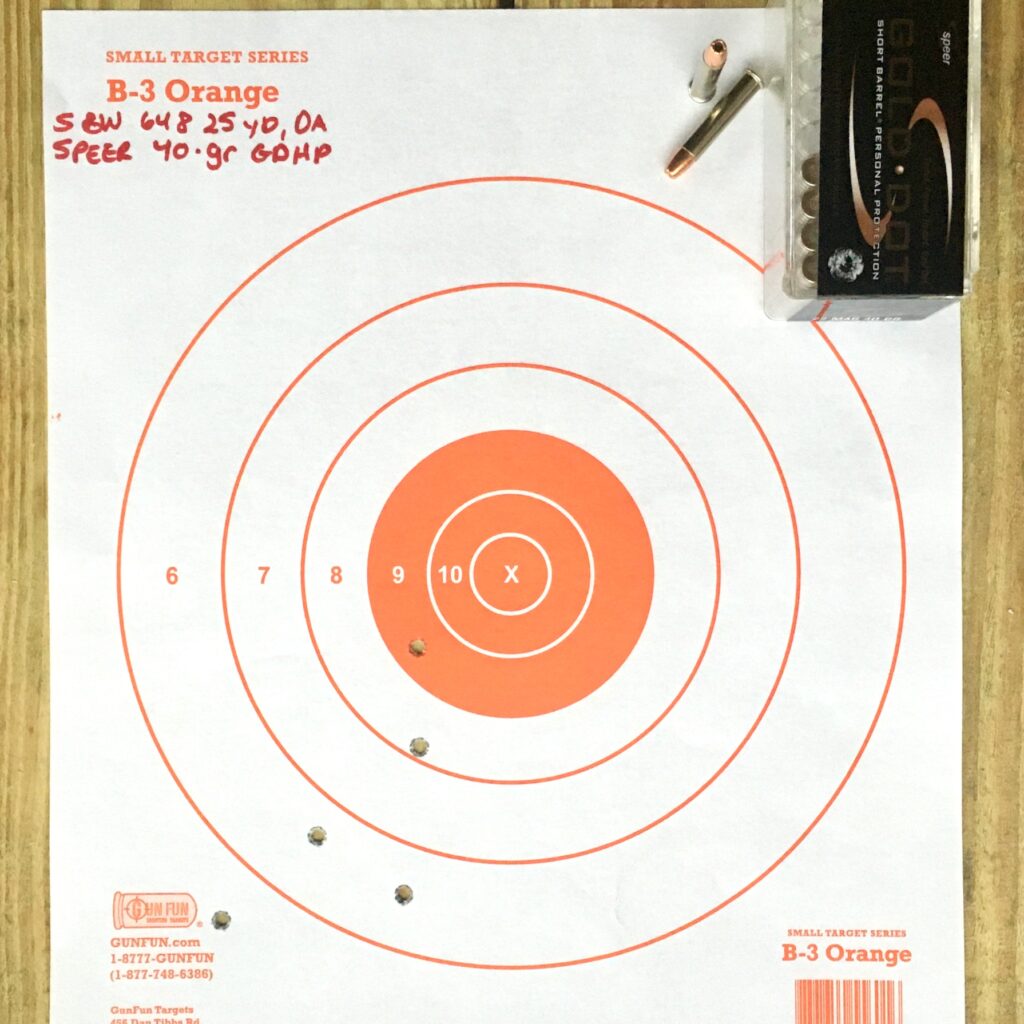 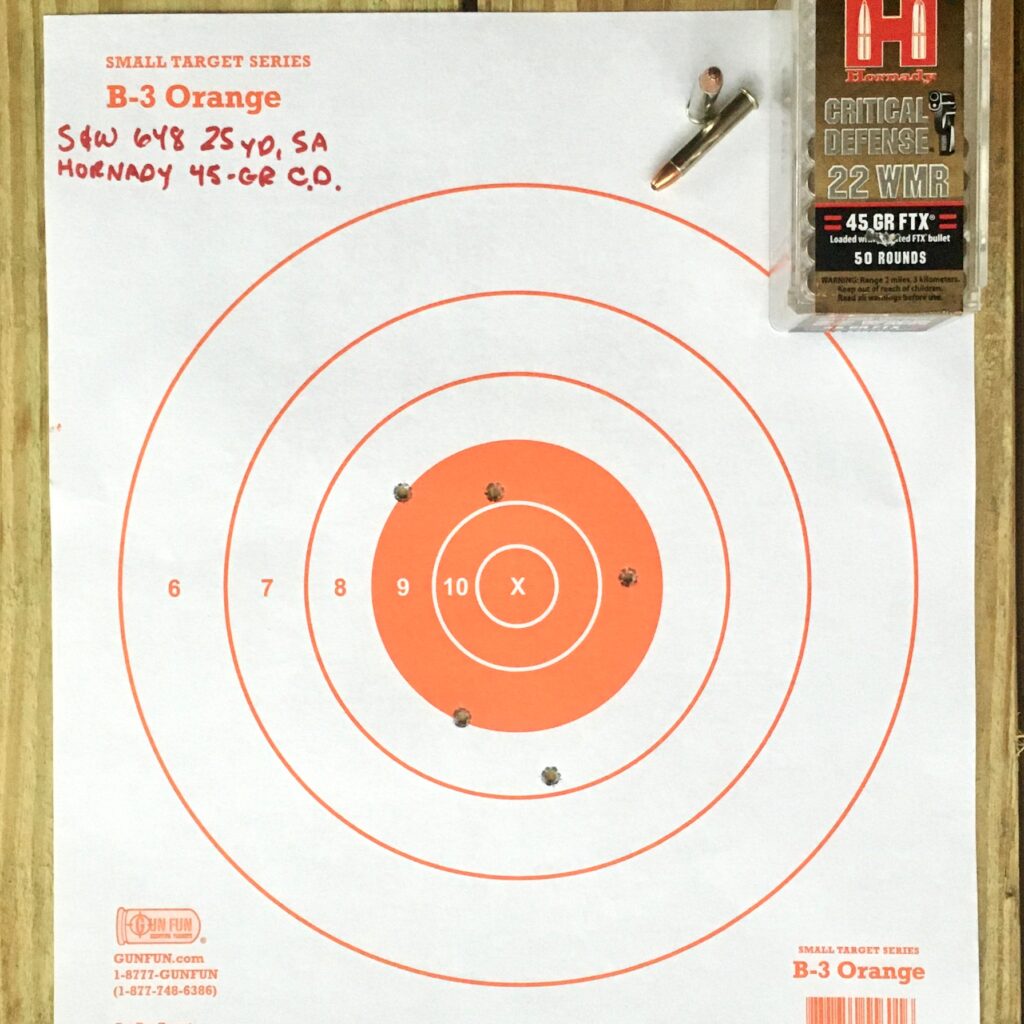 The Winchester’s spread was the largest of any load I shot at nearly 4 inches. However, that includes a flier that is, without a doubt, my fault. Excluding the flier this group is much tighter at 2 3/16ths inches. 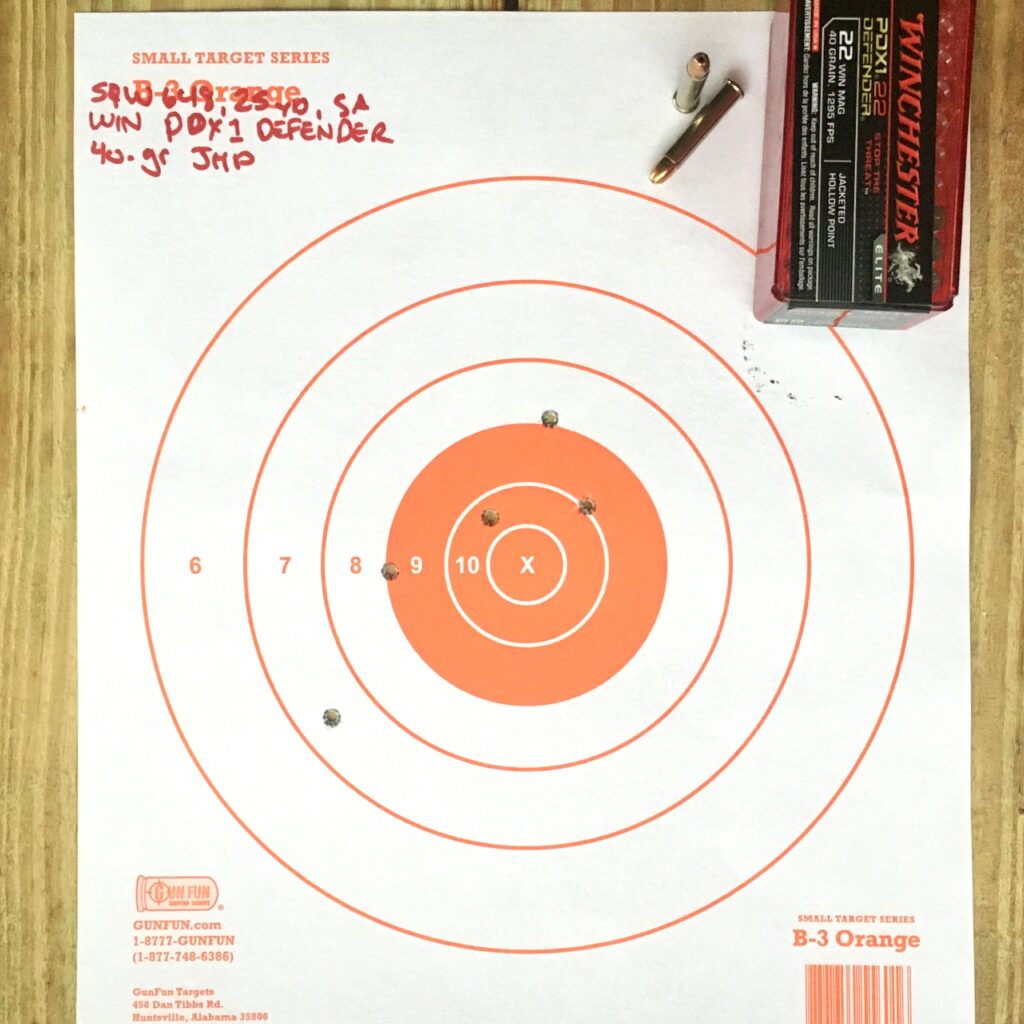 True to form with rimfires – and despite the heavy trigger – I experienced three failures to ignite. I experienced one each with the three defensive loads: the Winchester PDX-1, the Hornady Critical Defense, and the Speer Gold Dot. All rounds fired on a second hit. This is slightly disappointing but again, not totally unexpected. 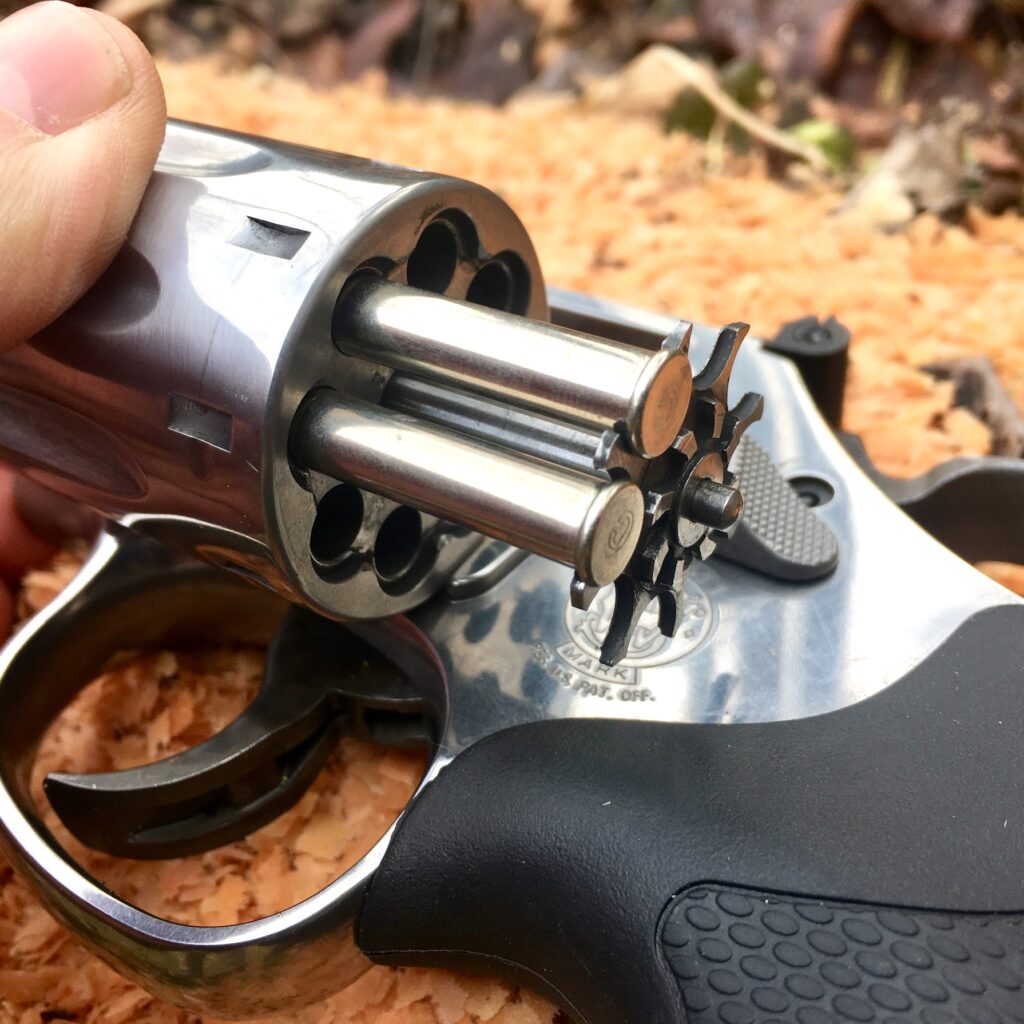 There is also one other area of reliability that I should address: ejection. To be clear I never had an issue ejecting empty cases. The ejector rod is nearly full-length and brass always ejected cleanly. However, I consistently had issues with powder collecting under the extractor star. This is where, again, I have some disappointment with self-defense ammo. Even the optimized “short barrel” ammo did not seem to burn its powder completely, causing “crud under the star” malfunctions. 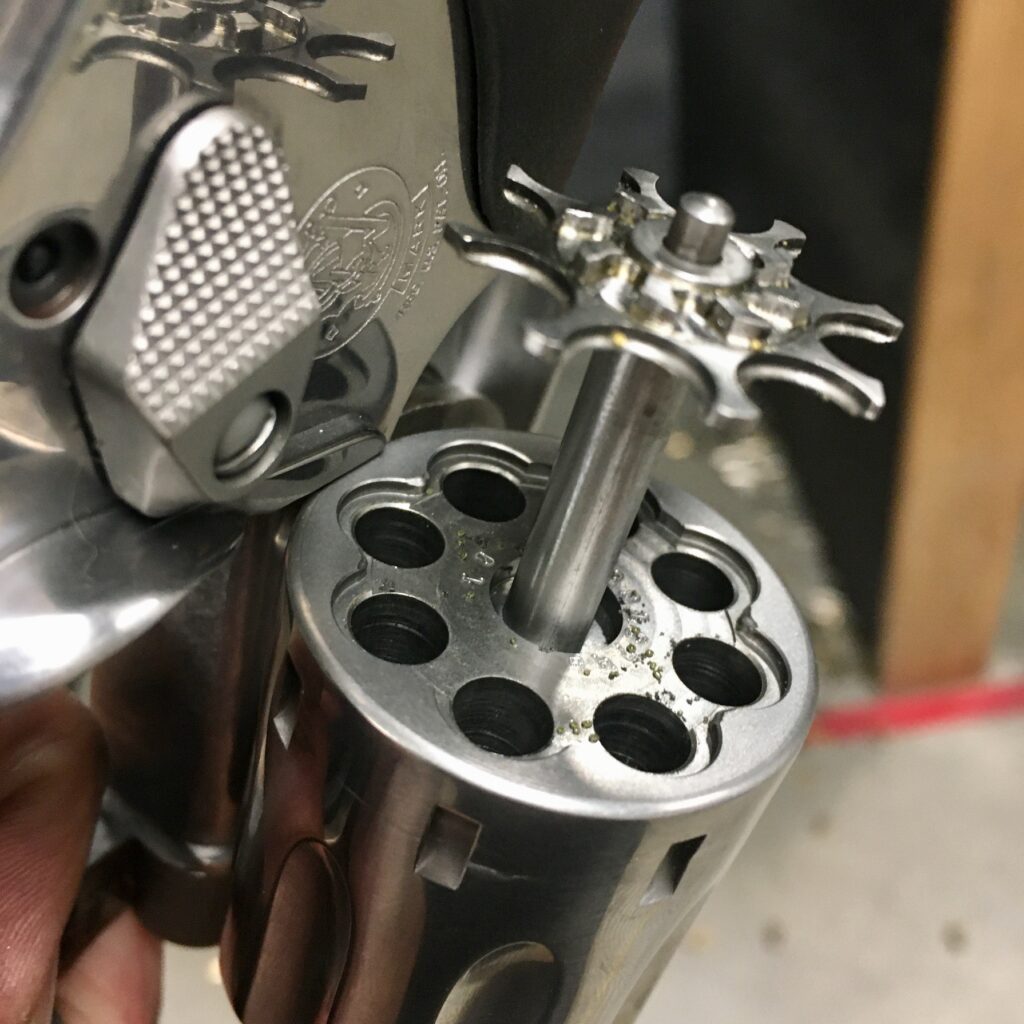 This issue was prolific, not a once-in-a-while thing. It happened with every ammunition tested. Almost every single time I ejected brass with the muzzle up, enough debris accumulated under the star to make closing the cylinder impossible. With this in mind, I would not expect to reload this revolver in any kind of a hurry, even if speedloaders eventually become available for it (currently, to my knowledge no one is making a speedloader for the 648). 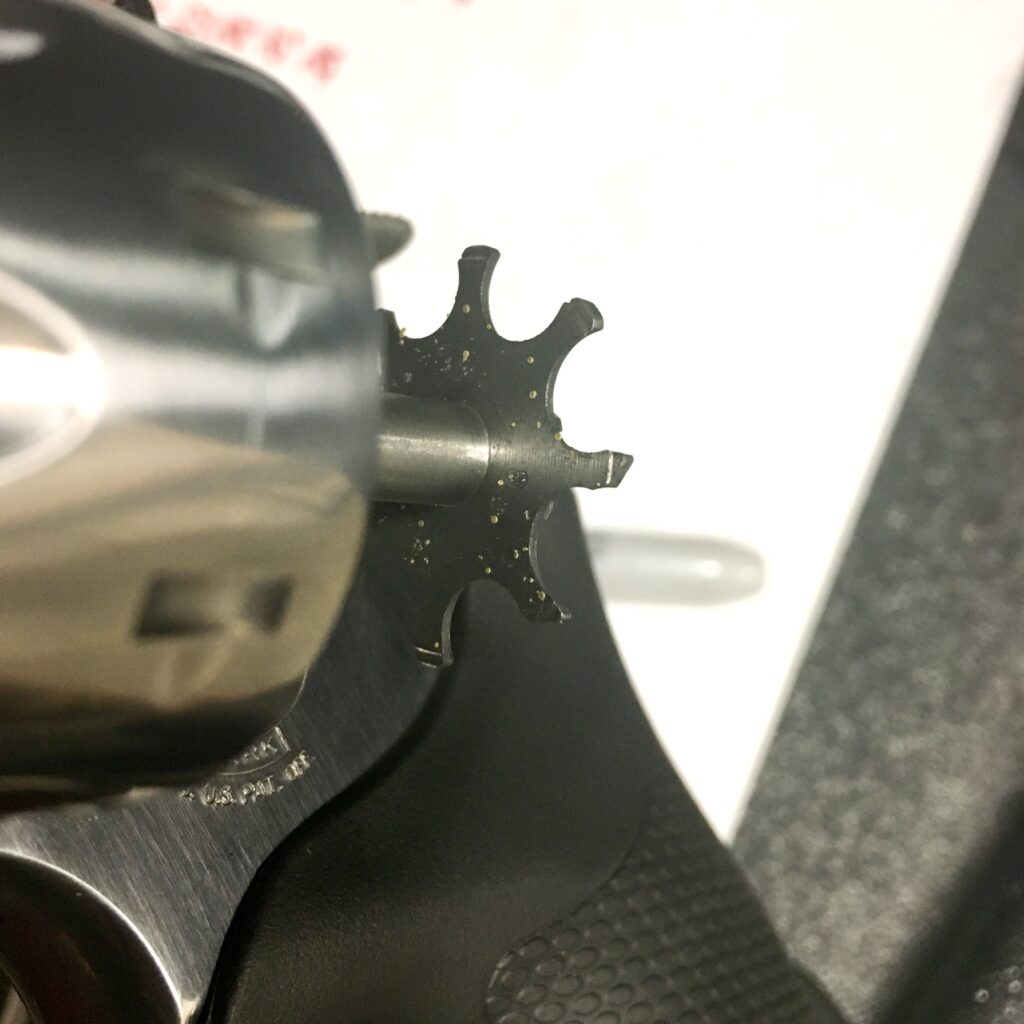 Outside of the light strikes and the repeated under-the-star malfunctions, the gun ran fine. If I were using this for any serious purpose, I would consider the 648 an eight-shot gun, and not plan on reloading in any kind of hurry.

Unfortunately, having to clean out under the extractor star between every string of fire dampened the fun a bit. It became fairly tedious and discouraged me from doing longer range sessions with this revolver. Had it not been for that I probably would have ran this gun well beyond the normal 500 rounds because it was terribly fun to shoot.

Bullet Velocities from the 648

Since I used a lot of the modern, defense oriented loads in the long-barreled 648-2, I wanted to get some idea of their velocities. Defensive ammunition tends to perform only within a given velocity window. Some of the .22 Magnum loads seem to diverge from this; the Hornady load, for instance, lists velocities for both handguns and rifles, perhaps indicating suitability for use in both (?). The Winchester load offers only one velocity, but the published velocity is still well over what I recorded out of the 648. Just out of curiosity I also chrono’d the 30-grain Hornady V-MAX. 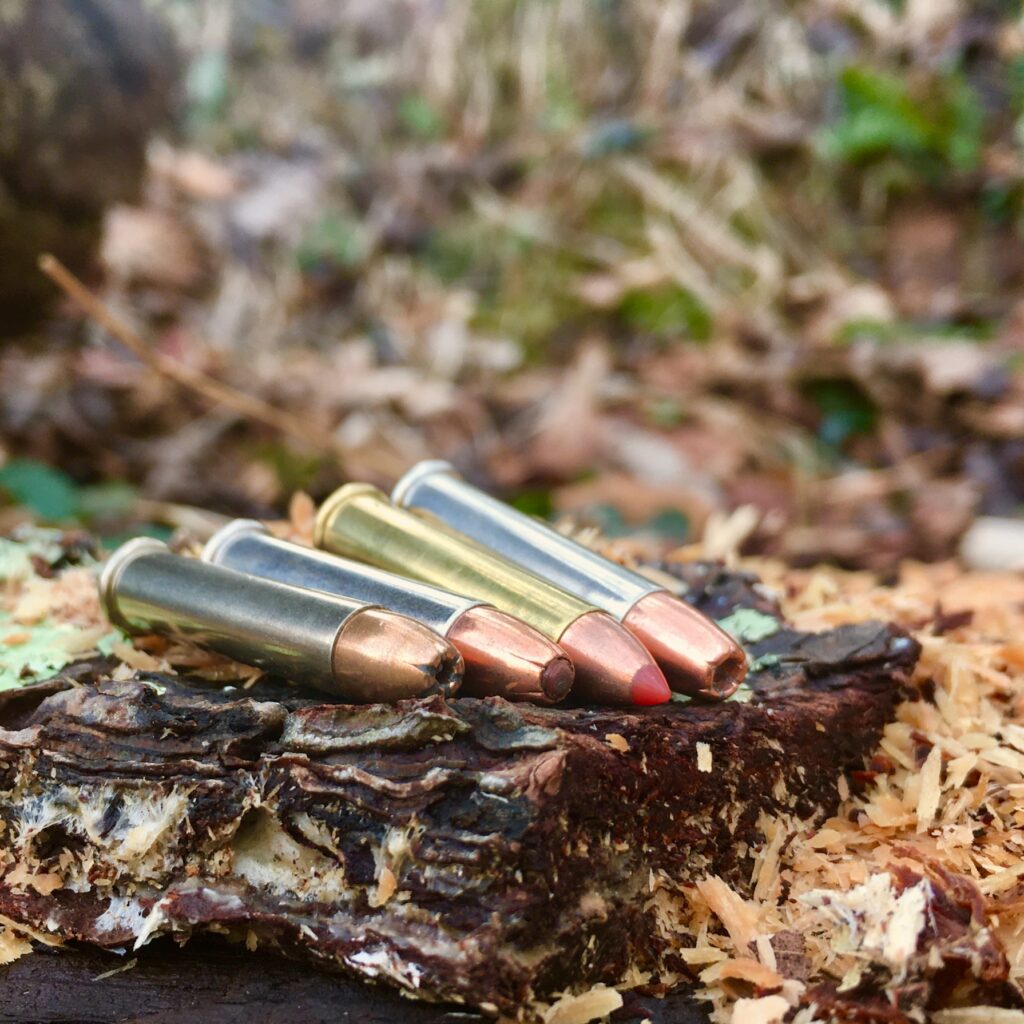 The velocities I recorded were:

These findings are interesting. Velocities with the Speer Gold exceeded advertised velocities by almost 20%. As the Gold Dot is specifically marked as “Short Barrel” I would probably refrain from using this load in the 648 for anything other than target shooting. The Hornady load was 178 FPS over its published handgun velocity, but still 500 FPS slower than its rifle velocity.

The Winchester load seems to be within its published velocity window, which makes me wonder what gun Winchester used when testing the velocity of the PDX-1 load. Were I pressing the S&W 648-2 into defensive service I would probably favor the Winchester as it gets closest its intended velocity from the 648-2. Which brings me to the question, what is this revolver good for?

I can imagine all sorts of uses for this revolver. I can also imagine some things you probably wouldn’t want to use it for. First, the 648 weighs an impressive 46 ounces. That places it almost exactly four ounces over and four ounces under the 4″ and 6.5″ 610s, respectively. This is probably not a revolver that’s going to see a lot of time in a holster. It’s probably also not going to be a “kit gun” in one’s backpack or tackle box, either. 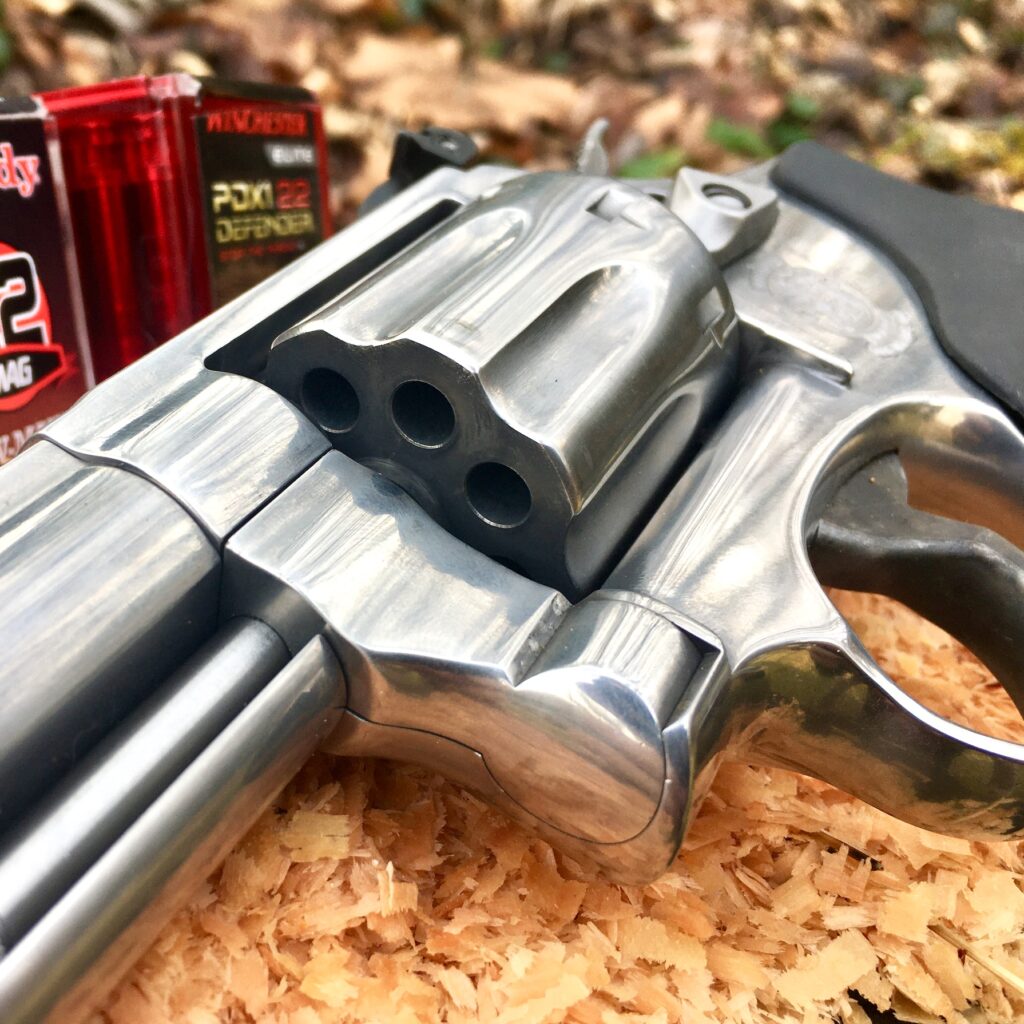 But for varmint duty or pot-shooting around camp, this would be one fine wheelgun to have on hand. I’ll be honest – I certainly wouldn’t mind this on the top of the fridge to sort out the occasional possum in the yard. I’m not a hunter (yet)(I need to get on that!) but even I can recognize the accuracy potential of the 648 for smaller game, varmint, and possibly even close-range predator hunting.

Finally, if this thing were offered in a four-inch variant, I think it would make a pretty good home-defense revolver for the recoil-sensitive. The .22 WMR seems to punch above its weight-class. Having eight on board in a package that hardly recoils at all wouldn’t make for a bad combination. Again, this is a theoretical as S&W doesn’t make a 4″ version. The current, 6″ version would work, but the long barrel would make it easily wrested from one’s hands. 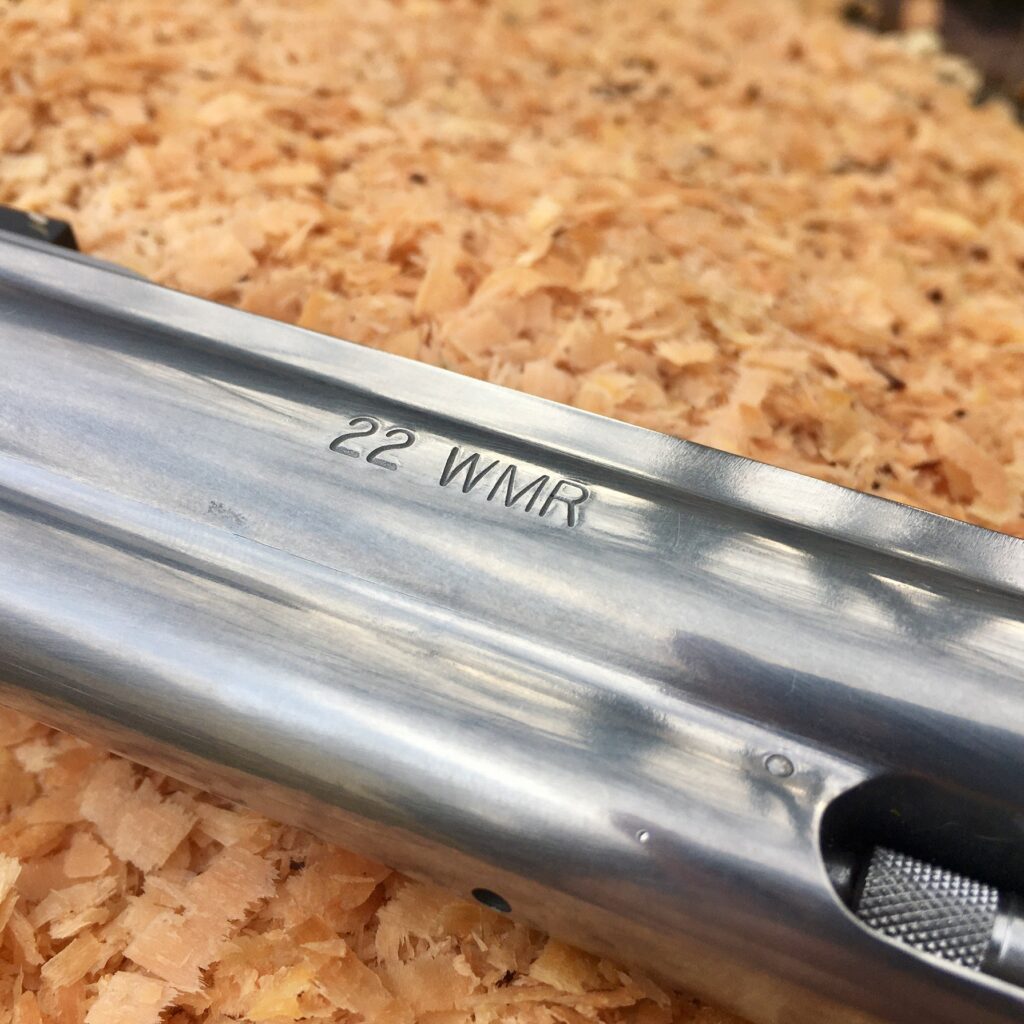 Probably the most likely use for this revolver is plain, ol’ fun! Of late it seems to have become the mark of the unfashionable, the unenlightened, and the uncool to express any appreciation whatsoever for any Magnum cartridge. Shooting Magnums in your .357 Magnum – even recreationally – seems to be a throwback that few gunwriters of the modern era would dare suggest or admit to. Condemn me as an Philistine though it may: I love Magnums. I greatly prefer .22 Magnum over the lesser rimfires, and seriously enjoyed shooting the S&W 648.

At the risk of repeating myself, I really enjoyed my time with the S&W 648-2. It provided me and my girl with some fun backyard sessions. Mostly, though, it filled a role in my range bag as a stress-reliever between sessions with the big bores. With its spectacular accuracy, I have no doubt it’s capable of much more. If you’re a fan of the .22 Magnum, this is one sweet platform for it!