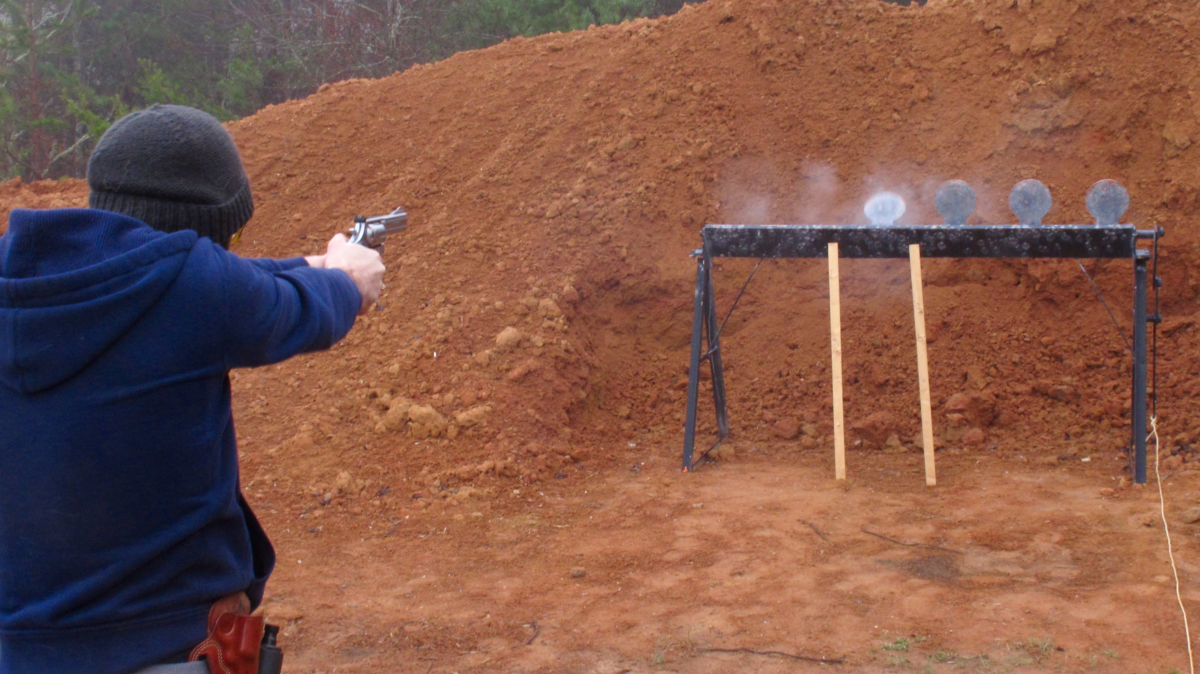 I am a firm believer in firearms training. Without training a firearm is little more than a talisman. Unfortunately, finding high-quality revolver training isn’t as easy as finding a course for running a bottom-feeder. Of course you could attend any old handgun class, but chances are good you’re going to have an instructor that doesn’t know much about revolvers and probably isn’t going to be able to help you much. In fact, us RevolverGuys have even been specifically exluded at certain training events*. There is good training out there, though, but you have to look pretty hard to find it. This article will tell you where to go to find some top-notch revolver training.

In the interest of fairness, I will list these trainers in alphabetical order, by company where applicable, and by last name otherwise. There is no implication that any one is preferred over any of the others; all of these men are at the absolute top of the revolver heap. Also in the interest of full disclosure: I have not attended training by any of these individuals. While I intend to change that, I am currently recommending them on reputation, but I’m confident you will not be disappointed.

Active Response Training is owned and operated by Greg Ellifritz. I assume that most of you are familiar with Greg’s work. In case you aren’t, Greg is a cop with more than 20 years on the job. Greg has attended over 4,000 hours of formal training, mostly in firearms and defensive tactics. In addition to his own courses he teaches at a number of big-name conferences like the Rangemaster Tactical Conference and Paul-e-Palooza.

While Active Response Training doesn’t offer any revolver-specific courses, revolvers are welcome in all of the gun-based classes: Extreme Close Quarters Gunfighting and Tactical Handgun. Greg is a RevolverGuy himself, so you don’t have to worry about being ignored by an instructor who doesn’t know what to do with you. Active Response has quite the interesting catalog of non-gun courses including Groundfighting, Knife Defense, Tactical First Aid and System Collapse Medicine, and Pet First Aid. Most of the Active Response’s classes are held in Ohio or Virginia with a smattering of other locales. Check Greg’s calendar to see if anything is in your area and read some reviews of his classes. Personally I hope to make it to Extreme Close Quarters Gunfighting this year.

Agile Training and Consulting is run by none other than Chuck Haggard. Chuck is a thirty-year veteran of both the military and law enforcement service and one of the community’s most well-respected trainers. One thing you might not know is that he is also a died-in-the-wool RevolverGuy! Chuck has been toting J-Frames for years and recently wrote about them in Recoil Magazine of all places (Chuck, if you ever want to write here, the door is open)! If you carry a wheelgun you’re welcome to attend any of Chuck’s regular classes but good news – he does occasionally offer a dedicated revolver course!

Most of Chuck Haggard’s revolver training is on-demand, meaning if he has enough interest he’ll run a class. Fortunately for us he is running his “Practical Revolvers” course this August. The course is a day long and will be held at FPF Training in Culpeper, VA. The cost is $200 and, at the time of writing, space is still available. If you want to sign up visit FPF Training’s site. Let’s show him some demand for his revolver classes and put some butts in seats! I’ve already paid for my seat and I’d love see some of you guys there!

You can’t talk about revolvers without talking about Grant Cunningham. Grant comes as close to anyone as being “The” RevolverGuy, at least in my mind. I was heavily influenced by his writing when I first got into revolvers and for good reason. Grant is a seasoned competitor, retired as one of the world’s premier revolver ‘smiths, and has written numerous volumes on the wheelgun. Grant has an extremely practical, no-nonsense style that I really enjoy.

Grant’s most popular course is called Threat Centered Revolver. This is a two-day class that will set you back around $400, and where you can expect to fire ~500 rounds. Currently Grant has two upcoming dates: 17-18 March in Phoenix, AZ (I know I’m giving you very short notice on that one) and 12-13 May in Whitewright, TX. For more information visit Grant’s site at http://www.grantcunningham.com/events/. No promises I will make it to either one of these, but Threat Centered Revolver is on my short list of must-have training events. It goes without saying you should read Protect Yourself With Your Snubnose Revolver before you get there!

Darryl Bolke and Wayne Dobbs are both former law enforcement officers who started on the job with wheelguns. If you know anything about either of these guys, you know they both love revolvers. Their company, Hardwired Tactical, offers a number of courses and all of them are revolver-friendly. Wayne Dobbs was kind enough to accept a phone call from me, and here’s what he told me.

Hardwired welcomes revolvers at every single course they teach, and one or two show up at most. Though the majority of their classes are in Texas, they also teach a few in other locales and are planning a mid-summer class at FPF Training in Culpeper, VA. The most exciting thing Wayne talked about is Hardwired’s Revolver Roundup, an event that happens every fall. Not only do you get some awesome revolver training, you also get to check out a MASSIVE collection of revolvers. I will definitely be vying for a spot at this year’s Revolver Roundup (dates TBA), and anything else Hardwired Tactical hosts that is within my reach.

As the head of Rangemaster Firearms Training, Tom Givens needs little introduction. Tom tells me that he does offer a course called Defensive Revolver. It is a one-day course with some classroom time and some range time, and Tom brings out a bunch of revolver gear for shooters to try out. Unfortunately, Defensive Revolver is a “low-demand” course, with the next one being scheduled for April, 2019, in Athens Georgia.

If you can’t wait that long to train with your wheelie, Tom says RevolverGuys can bring their revolvers to Rangemaster’s other offerings. Two of Rangemaster’s most popular classes are Combative Pistol and Instructor Development and, “[Revolver guys will] work their butts off to keep up with modern autos…” He goes on to say that if you carry a revolver, that’s exactly the challenge you should be accepting, and I don’t disagree!

Thunder Ranch is one of the world’s foremost firearms training academies. Headed up by Clint and Heidi Smith, Thunder Ranch offers a non-stop catalog of courses. They even offer a course called “Defensive Revolver” and a DVD by the same name that is worth checking out. I don’t know about you, but I would LOVE to train under Clint Smith’s revolver curriculum! Unfortunately there is some bad news here….

Thunder Ranch does not have a Defensive Revolver course on the schedule for 2018. I reached out to them to see if they supported revolvers and this is the response I got less than two hours later (on a Sunday evening no less!): “We want you to train with what you carry/use on a normal basis so no revolver discrimination here!” This means you can attend any of TR’s Defensive Handgun courses (of which there are a considerable number) with your rotator and feel confident that you’ll get good instruction.  Maybe us RevolverGuys should get together and express some interest in Thunder Ranch blowing the dust off of that Defensive Revolver curriculum…

Sadly, I was unable to reach The Tactical Professor in time for this article. He was recommended by so many of the other trainers that I spoke to for this article it didn’t feel right not to mention him. If you can find some training by Claude Werner, you should jump on it. Claude is the former special operations officer, chief instructor at the Rogers Shooting School, and strong proponent of the revolver. I’m sorry I can’t offer you more detail but I certainly didn’t want to leave him out.

I have a few final thoughts with this article. First and most importantly: get some training. It doesn’t matter if it’s with the “best” and most prestigious revolver instructor or not, as long as it’s not bad training. Find an instructor with a good reputation. Find an instructor with some reviews, and with a qualification like a Rangemaster instructor certification. I don’t think law enforcement or military service is mandatory in an instructor, but I also don’t think it’s a bad thing. Even if you’re an experienced RevolverGuy, professional instruction is a good “recalibration” of the system.

Secondly, if I’ve missed someone important, you guys should let me know and I’ll fix it ASAP. I’m sure I’ve probably missed someone obvious. I’m also sure there are a number of qualified and talented local instructors out there, as well. Make sure to let me know about these. Finally, don’t be afraid to reach out to instructors. You’ll notice that several of the instructors listed here don’t advertise revolver training. This doesn’t mean they don’t know revolvers or don’t want to see them in class. Get in touch and find out. And get some revolver training!

*In response to the negative feedback, the NRA now allows 1911- and revolver-shooters in its Carry Guard classes. I still wouldn’t recommend the $850 course.