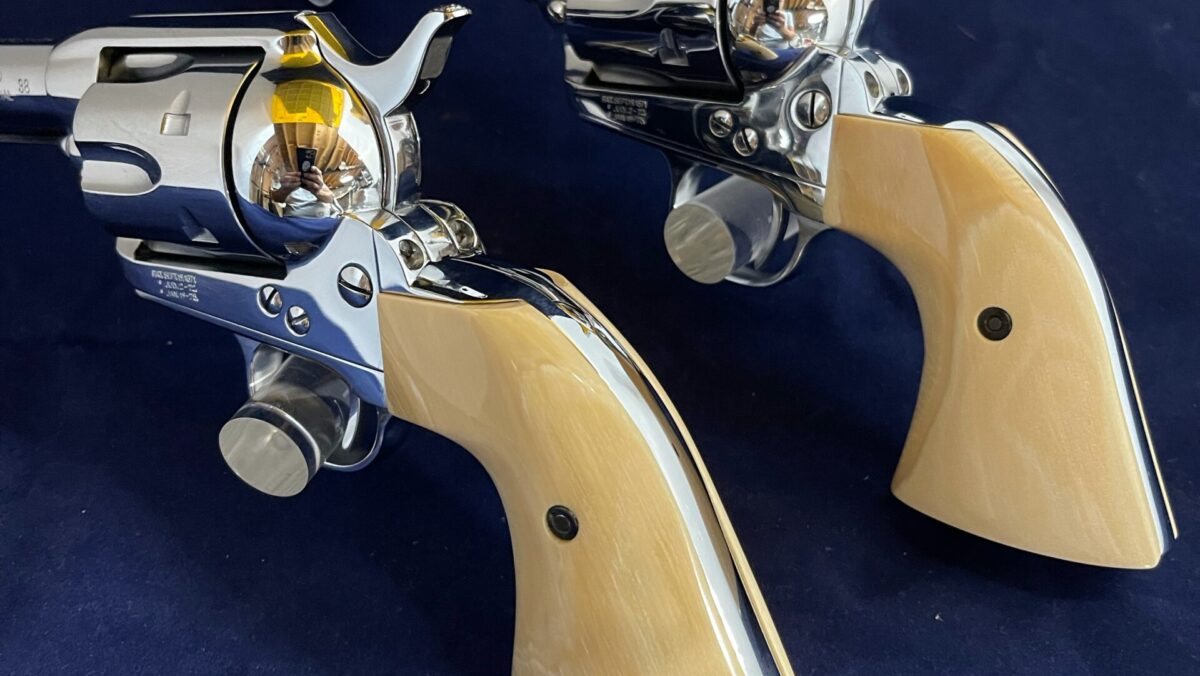 I was recently talking to friend Scott Kolar, of SK Custom Grips, to get an update on how things were going at one of the industry’s finest grip makers.

Longtime RevolverGuy readers will certainly remember the beautiful work done by the artisans at SK Custom Grips, from our previous article on them, but if you didn’t catch that one, we’d strongly encourage you to check it out.  A friendly warning though: Get a drool cup ready before you take a look!

Since our last article, SK Custom Grips has moved to a larger workshop that will allow them greater space, improved efficiency, and the ability to keep up with the volume of orders they are receiving from manufacturers, distributors, and individual customers. Scott and his crew are pleased to have the additional elbow room, and making good use of the extra square footage.

While Scott and his crew are doing a lot of 1911 work these days, the revolver is not being neglected at SK Custom. Scott got his start making revolver grips, and they will always be an important part of SK’s focus. In fact, Scott told me about a couple revolver projects they were working on, and they sounded so good that I asked him to send some photos to share with the RevolverGuy audience.

The first project involved an engraved Colt Single Action Army with vintage, mother of pearl grips that didn’t fit the frame right.  Its owner approached Scott with a request to correct the fit of the vintage grips, and he was glad to help. 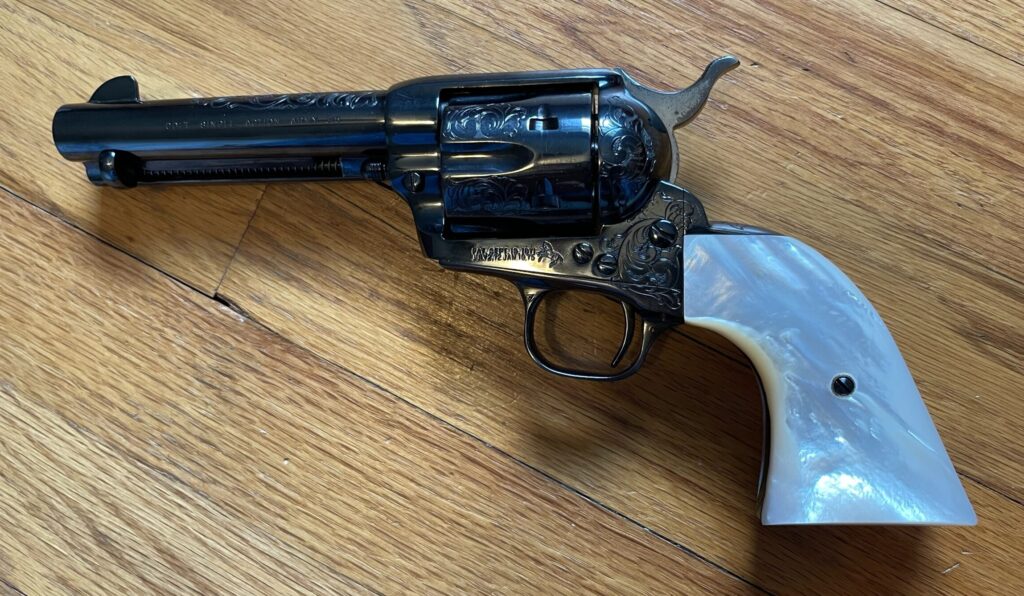 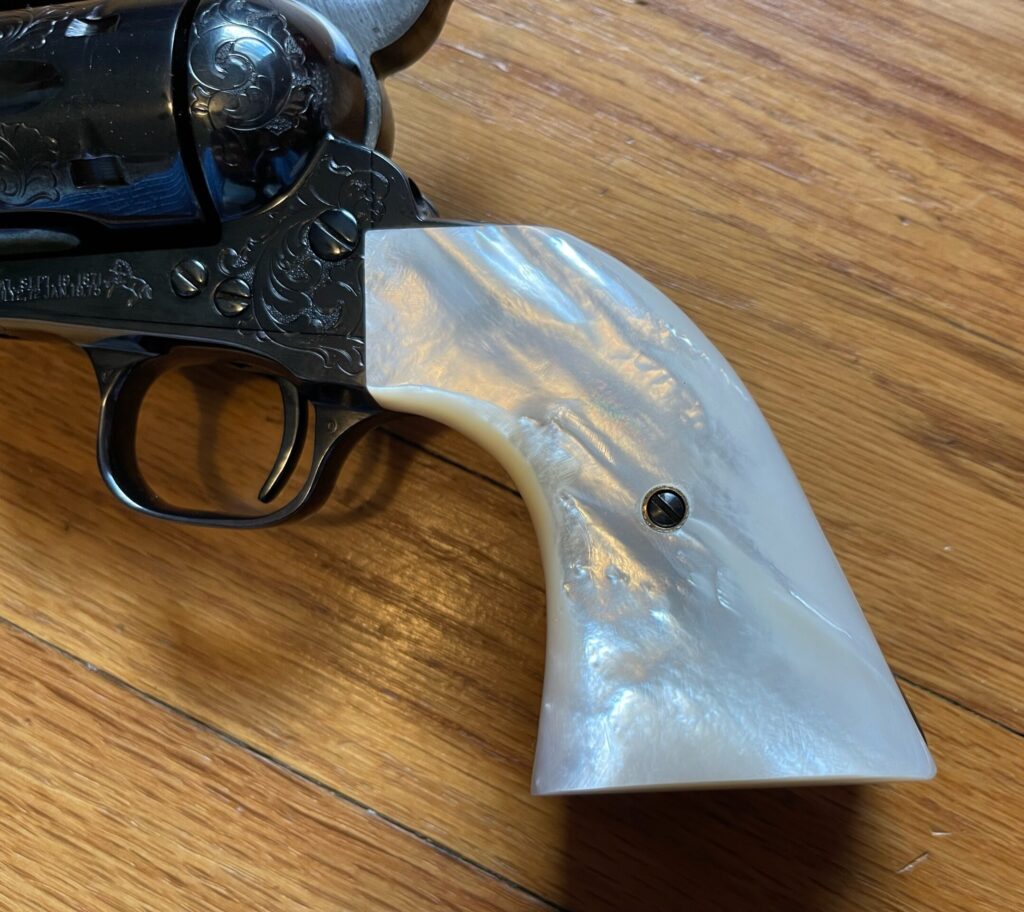 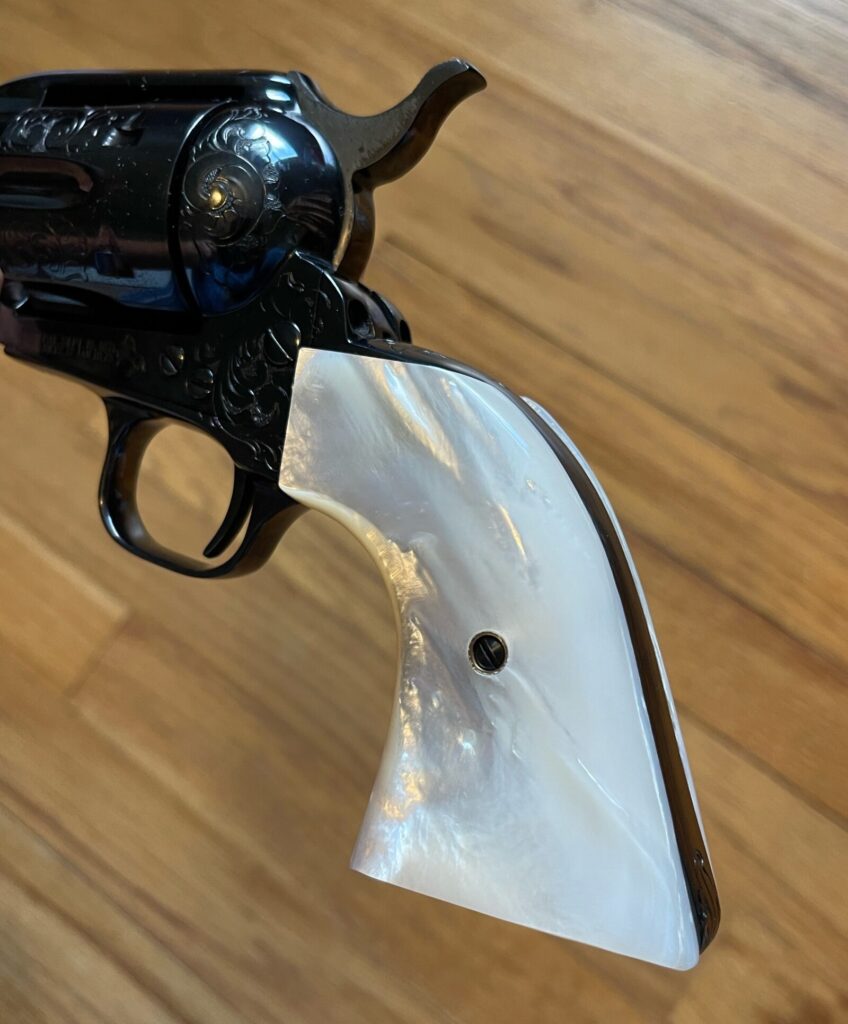 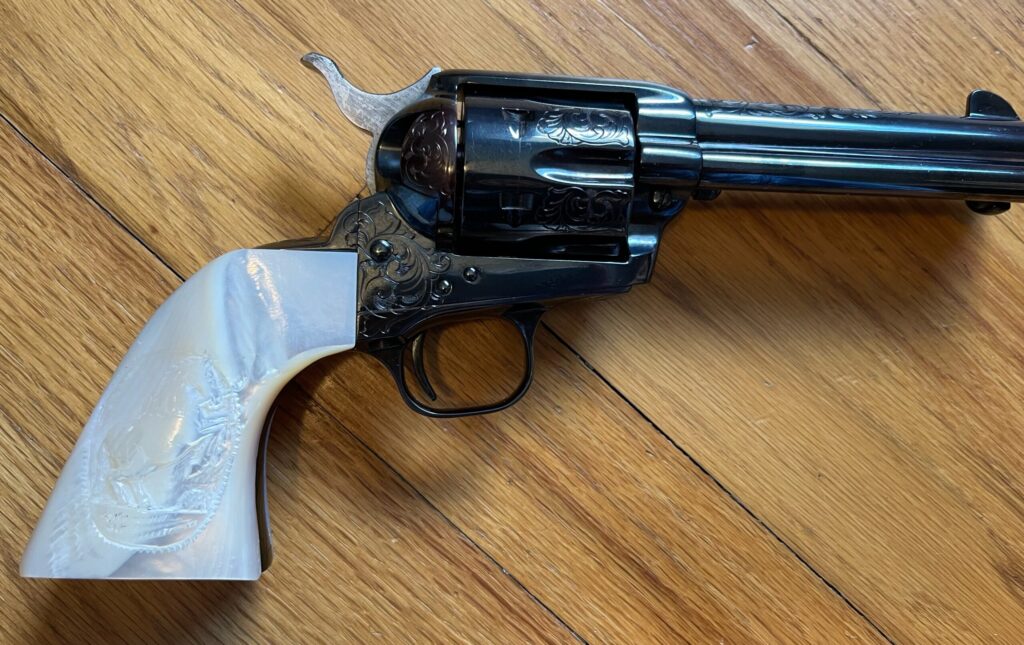 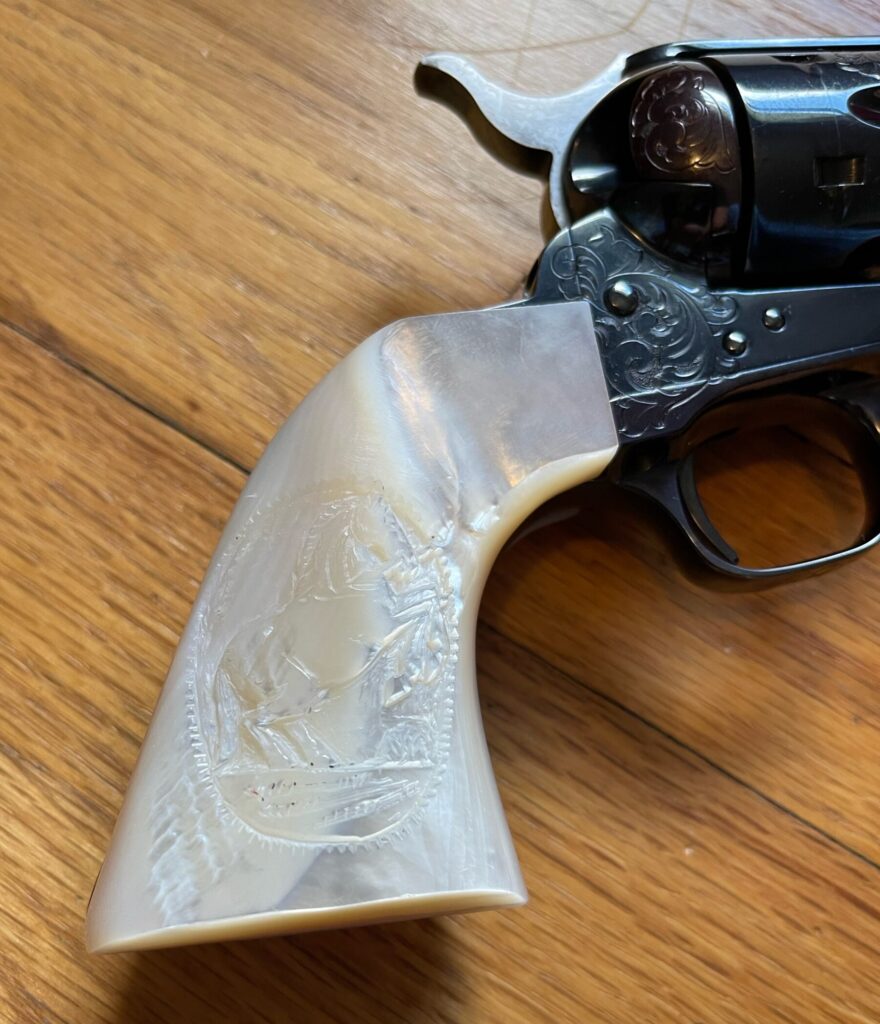 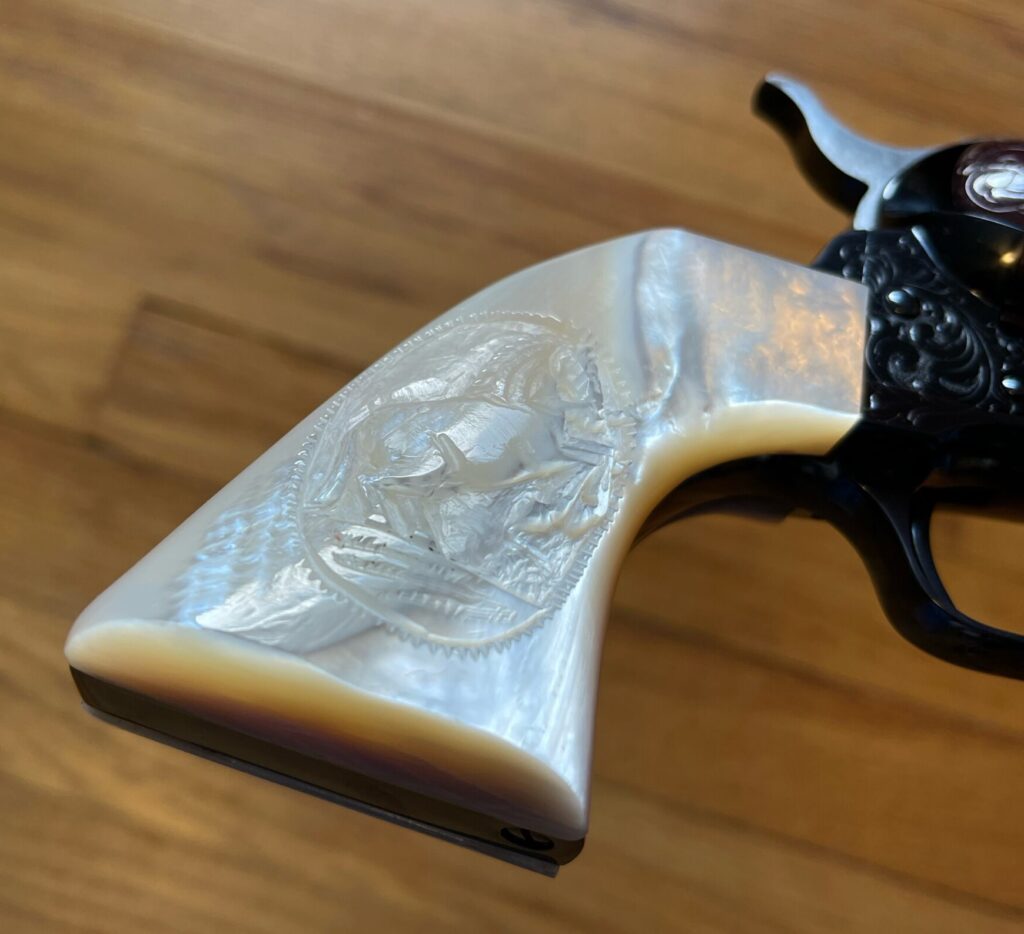 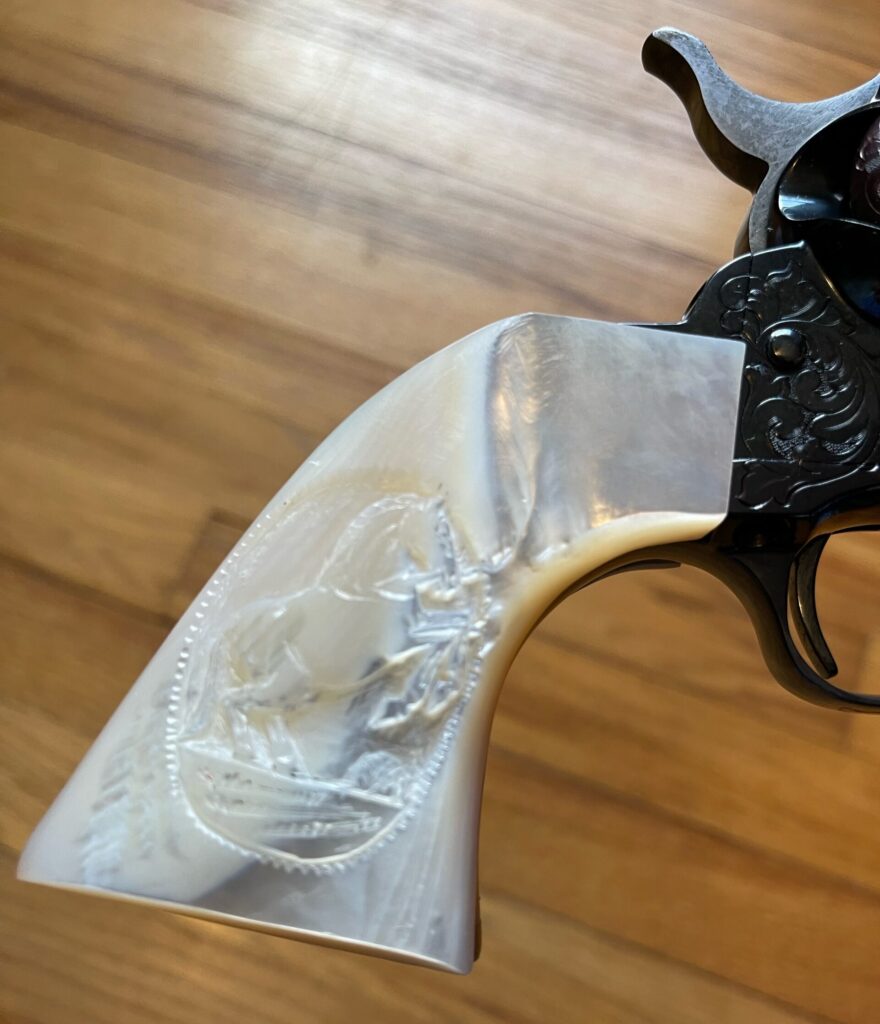 The historians among you will recall that General George S. Patton, Jr. was known for his flashy and colorful image, an important part of which was the ever-present sixgun on his hip.

Patton was proud of his ivory-stocked revolvers (God help the man, like the hapless newspaper reporter, who mistakenly called them “pearl-handled!”) and wore them throughout his distinguished career. After a short-range encounter with Pancho Villa’s forces, during the Punitive Expedition, forced him to reload his Colt SAA in the middle of combat, the young cavalry officer adopted the habit of carrying a pair of the guns.  When one of these SAAs was later given to a Hollywood star, Patton replaced it with a 3.5″ barreled Smith & Wesson Registered Magnum, wearing a similar pair of carved ivories. Patton would later refer to the Magnum as his “killing gun.”

One of Scott’s customers, with an appreciation for the Patton-style grips, asked Scott to create a similar pair for his own sixgun, out of mammoth ivory. The craftsmen at SK Custom were eager to accept the challenge, and created a beautiful pair of grips for the customer’s gun, complete with eagle and initials in the Patton style. However, unlike the Patton grips, the details were scrimshawed into the mammoth ivory, rather than carved. 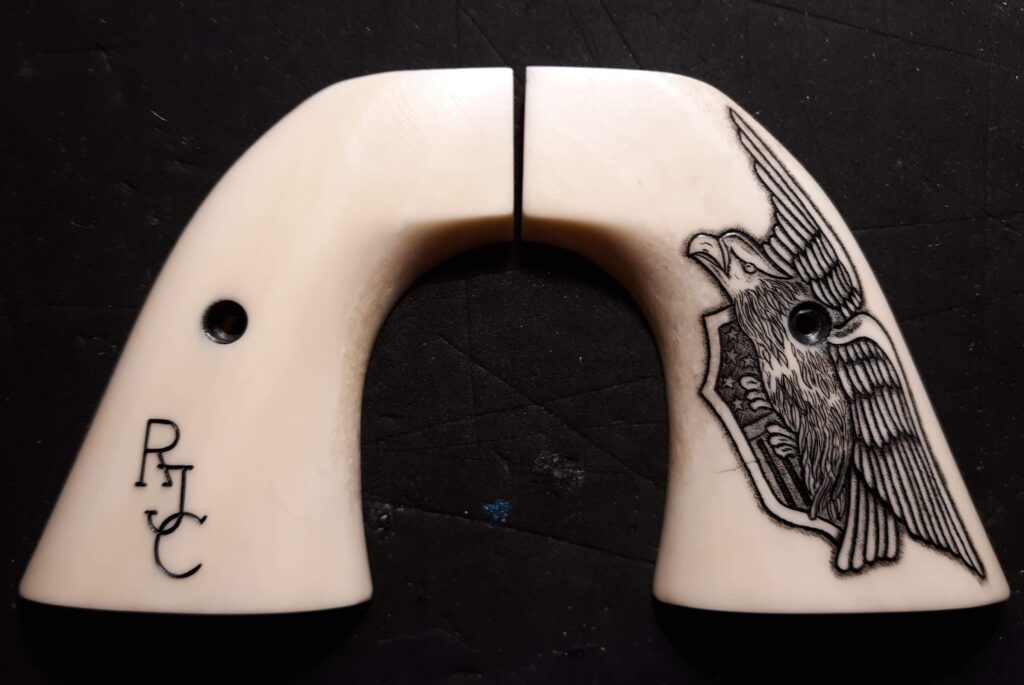 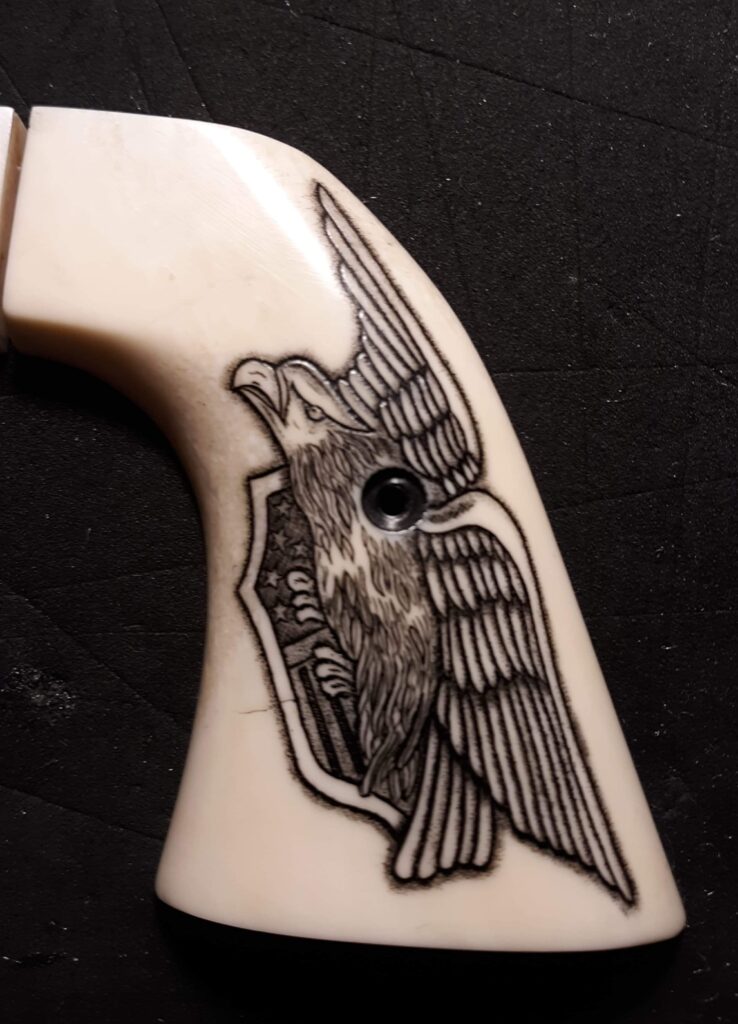 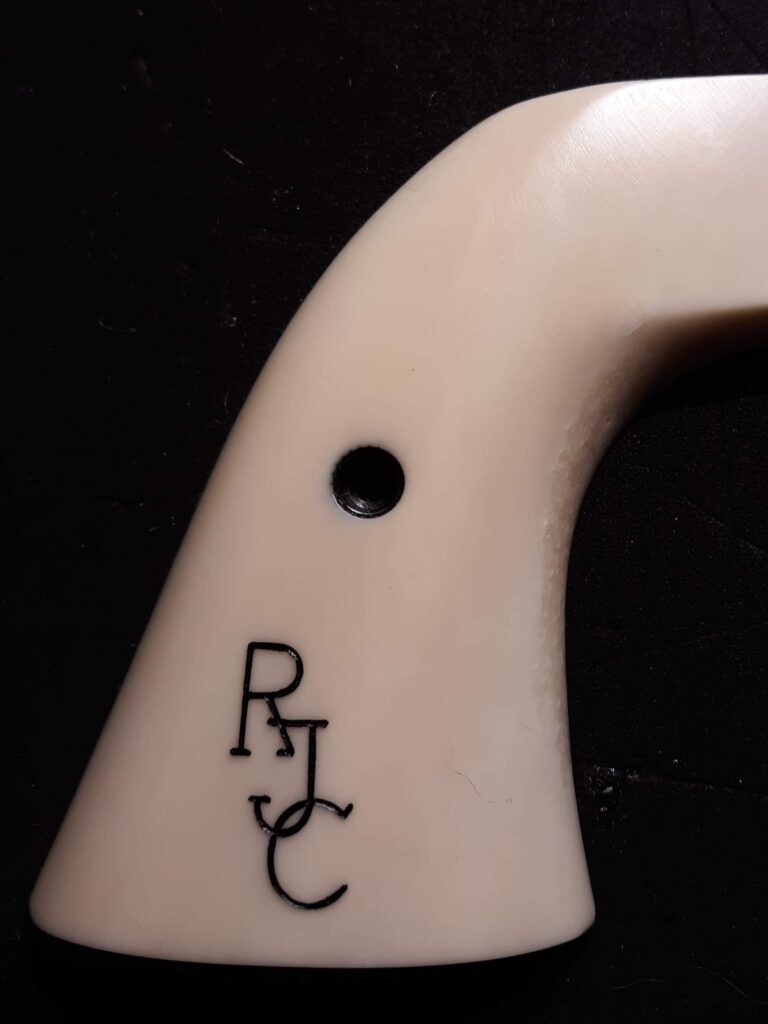 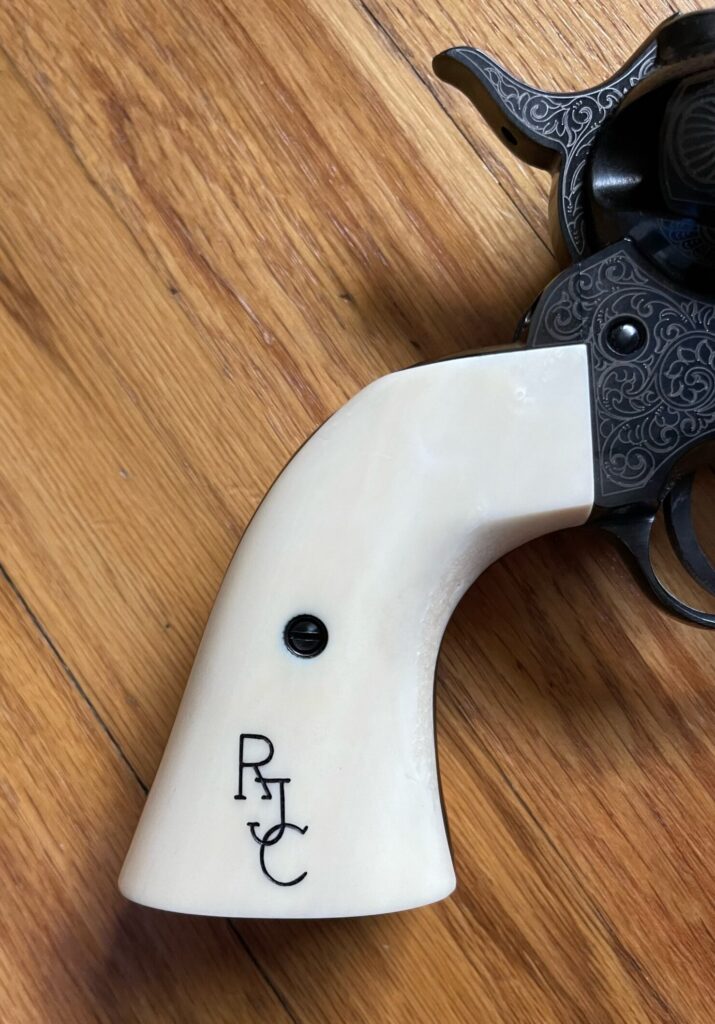 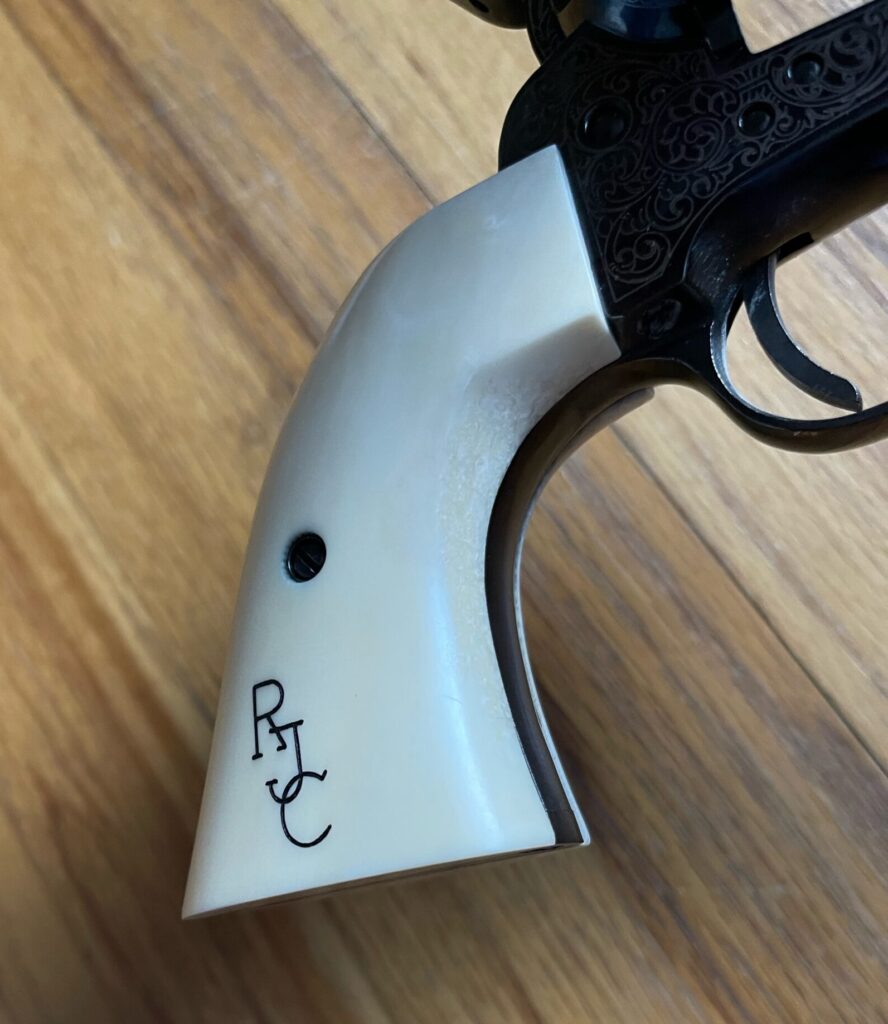 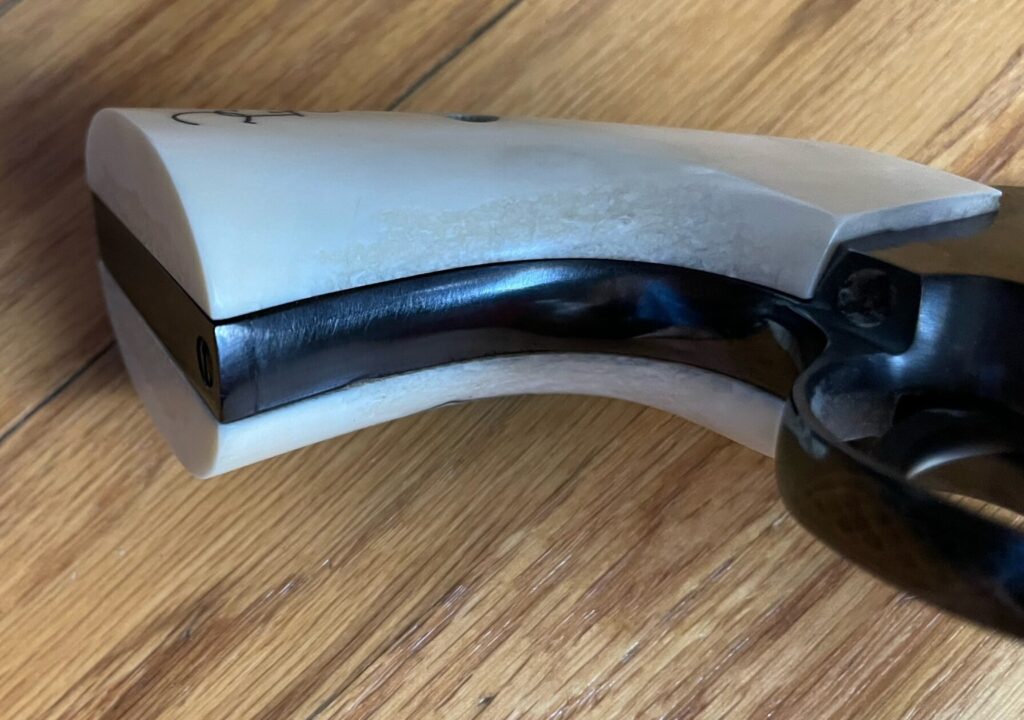 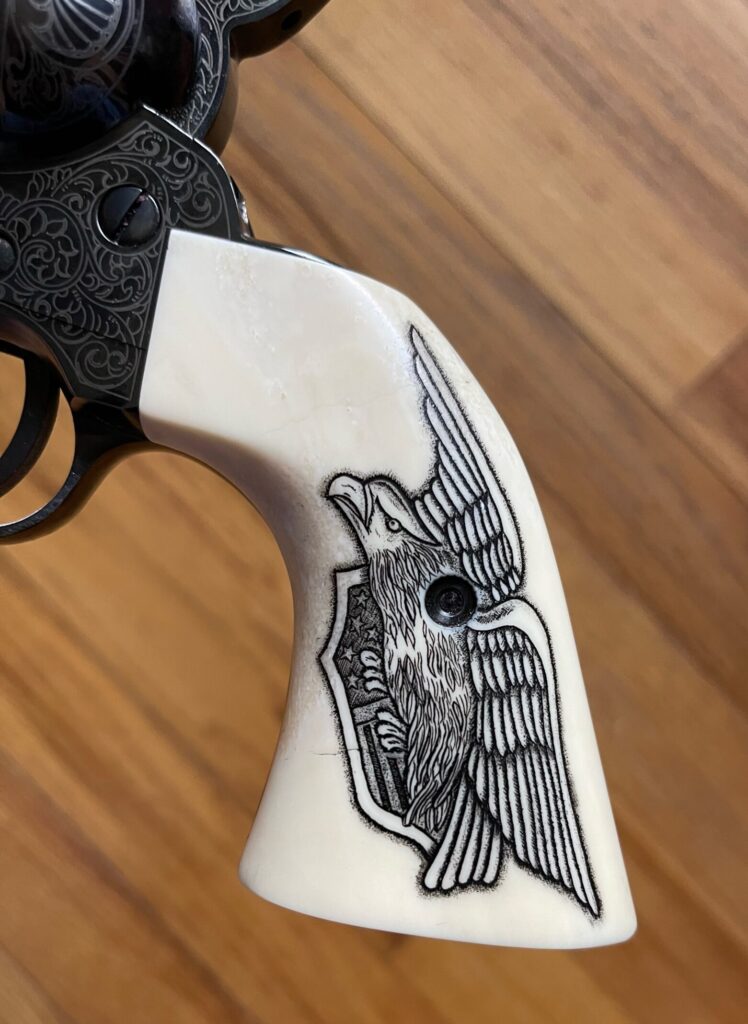 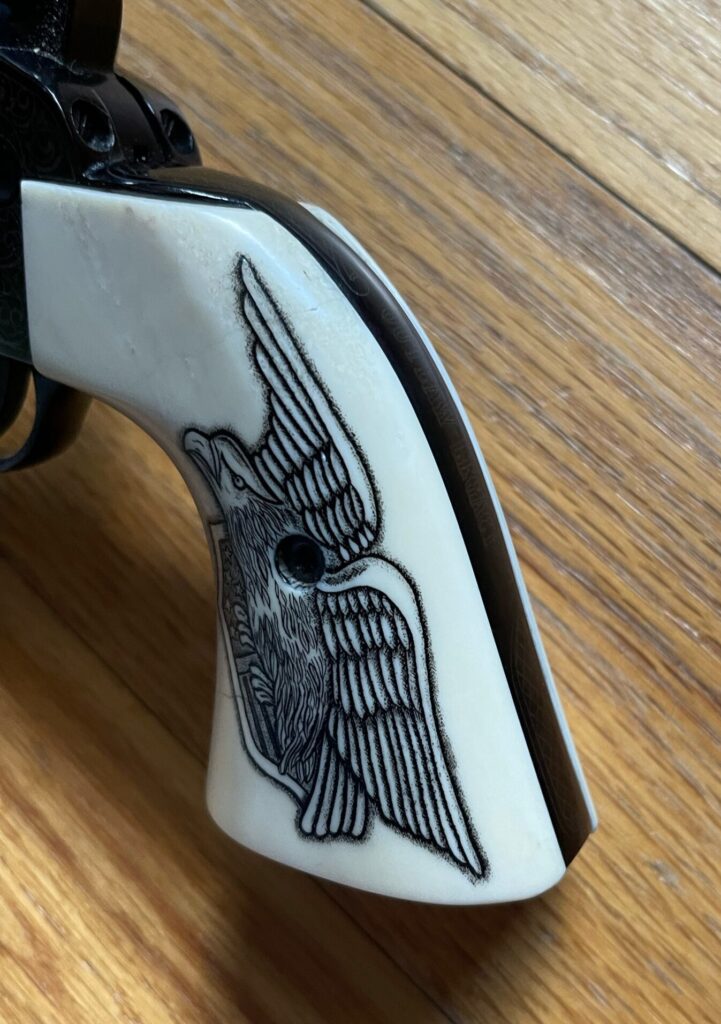 As you can see, Scott and his team are still doing Grade-A+ work on revolver stocks, and would be glad to help you with your next special project. Whether your tastes run towards mammoth ivory or exhibition-grade woods, they can build a beautiful set of custom stocks that will make your the gun the envy of the others in your safe.

You can reach Scott and his team through their website.  When you drop him a line, make sure to tell him we sent you!