My daily carry gun for the past year has been the Smith & Wesson 640 Pro Series. This J-Frame .357 Magnum offers many features not seen on other guns in its size-class. In Part I of this review I am going to discuss the gun itself, in detail. In the next part I am going to cover the piece’s range performance and actually carrying it – a task at which I have fairly considerable experience. Disclaimer: My apologies for the dirt, dust, and scratches on this piece. She has earned those marks honestly.

First off, the boring stuff: the S&W 640 Pro series is an all-stainless steel, 5-shot, double-action only, J-Frame revolver in .357 Magnum. The gun has a 2 1/8″ barrel and weighs in at 22 ounces. The 640 Pro has a suggested retail price of $839 – a fairly handsome sum for a J-Frame. The reason for such a high asking price? The 640 Pro is assembled by the Smith & Wesson Performance Center and has a pretty significant feature set. 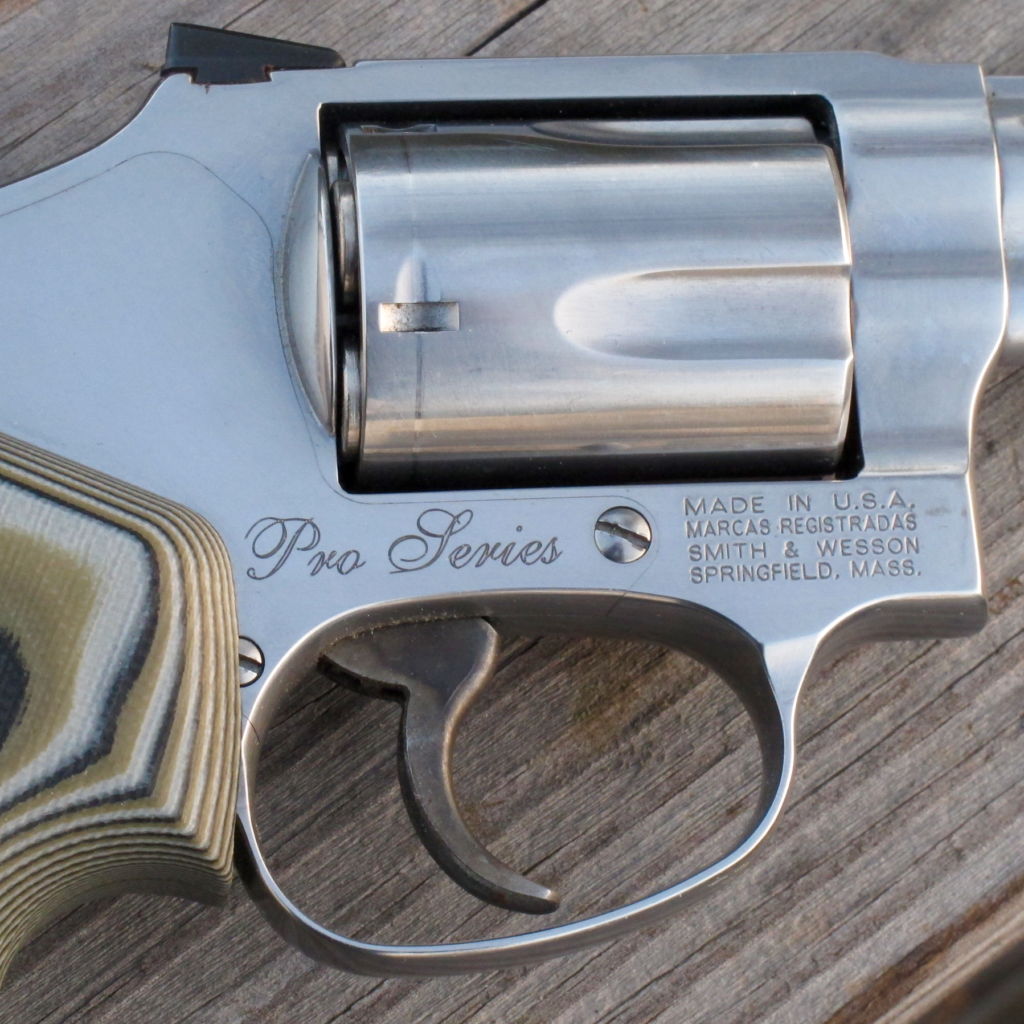 From a standpoint of pure functionality, the biggest improvement to this revolver over more pedestrian J-Frames is the addition of sights that are actually usable. Not only are they usable, the are actually night sights! This is unheard of on a factory snubby and was one of the single biggest selling points for me. Though I would prefer a configuration other than the three-dot arrangement, I’m really glad to have it. 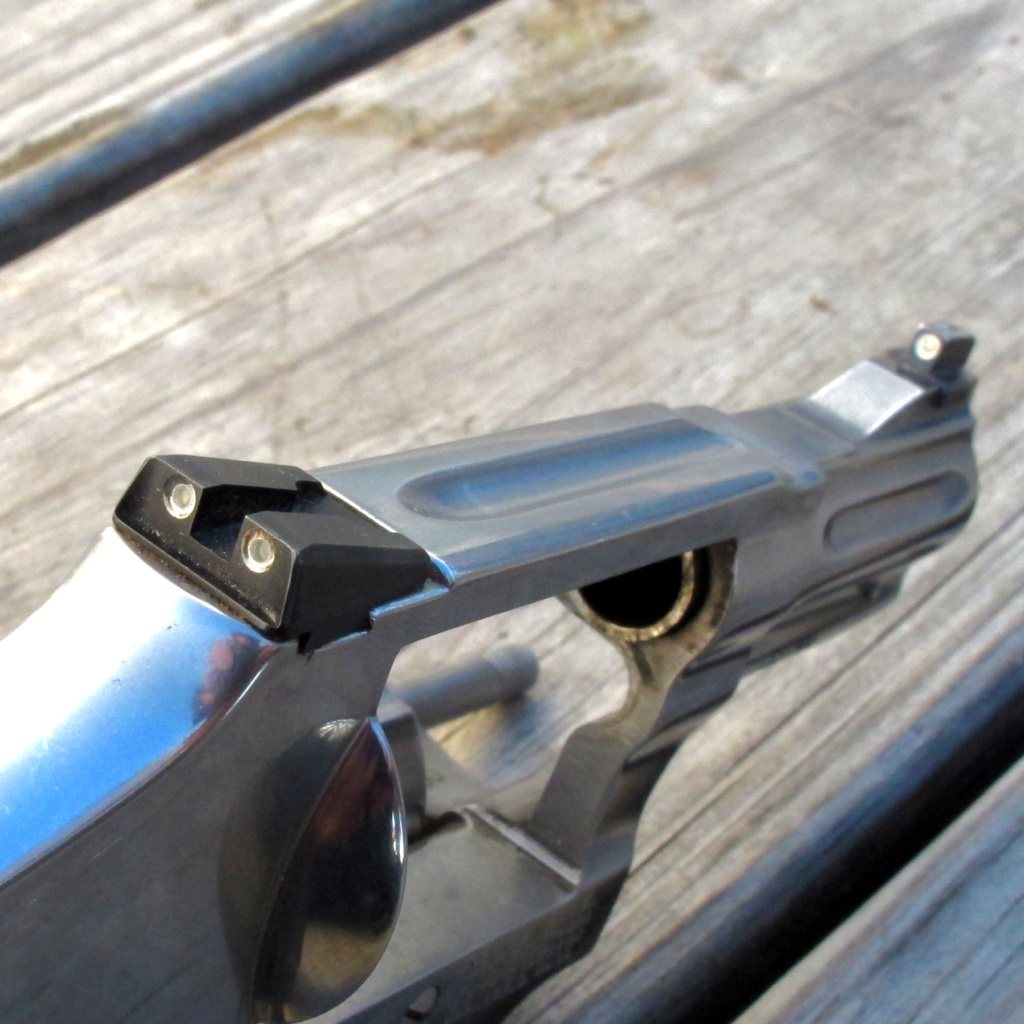 This revolver is of the “hammerless” design. There is no exposed external hammer. This seals the back of the gun, where it is most likely to take on dirt, grit, and grime. It also eliminates the risk of the useless (for self defense) hammer snagging on your clothing when drawing the weapon. And though it is completely subjective, I really like the clean lines of this design.

One of the 640 Pro’s major selling points for me – and one that Smith & Wesson doesn’t advertise heavily – is the lack of the internal safety. Though problems with these safeties seem to have receded (or at least receded from public consciousness) in recent years, I don’t like the needless complexity they add to the gun. I also don’t like their unsightly appearance. Thankfully there are still a few revolvers being manufactured without the ugly keyhole above the cylinder release latch. 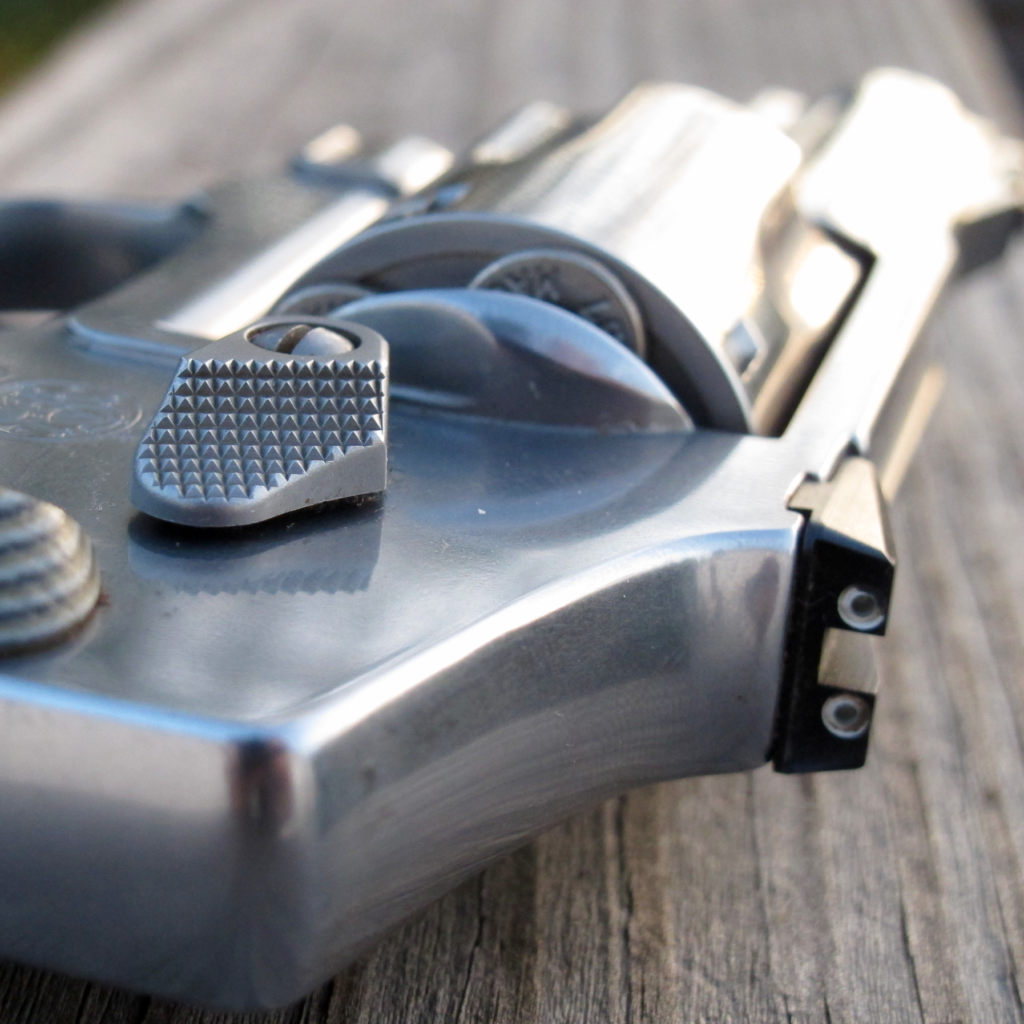 Another nice feature of  the 640 Pro Series: the cylinder is pre-cut to accept moon clips and the gun ships with three of them. Though it is doubtful that many individuals will carry a spare moon clip as a reload, this is still a really cool feature. Even if you don’t carry reloads in a moon clip, you may want to carry one in the gun. It aids in positive ejection of empties by ensuring they all come out en masse. It also ensures the extractor star has something very big to push on and eliminates the chance of stuck brass or brass under the extractor star. 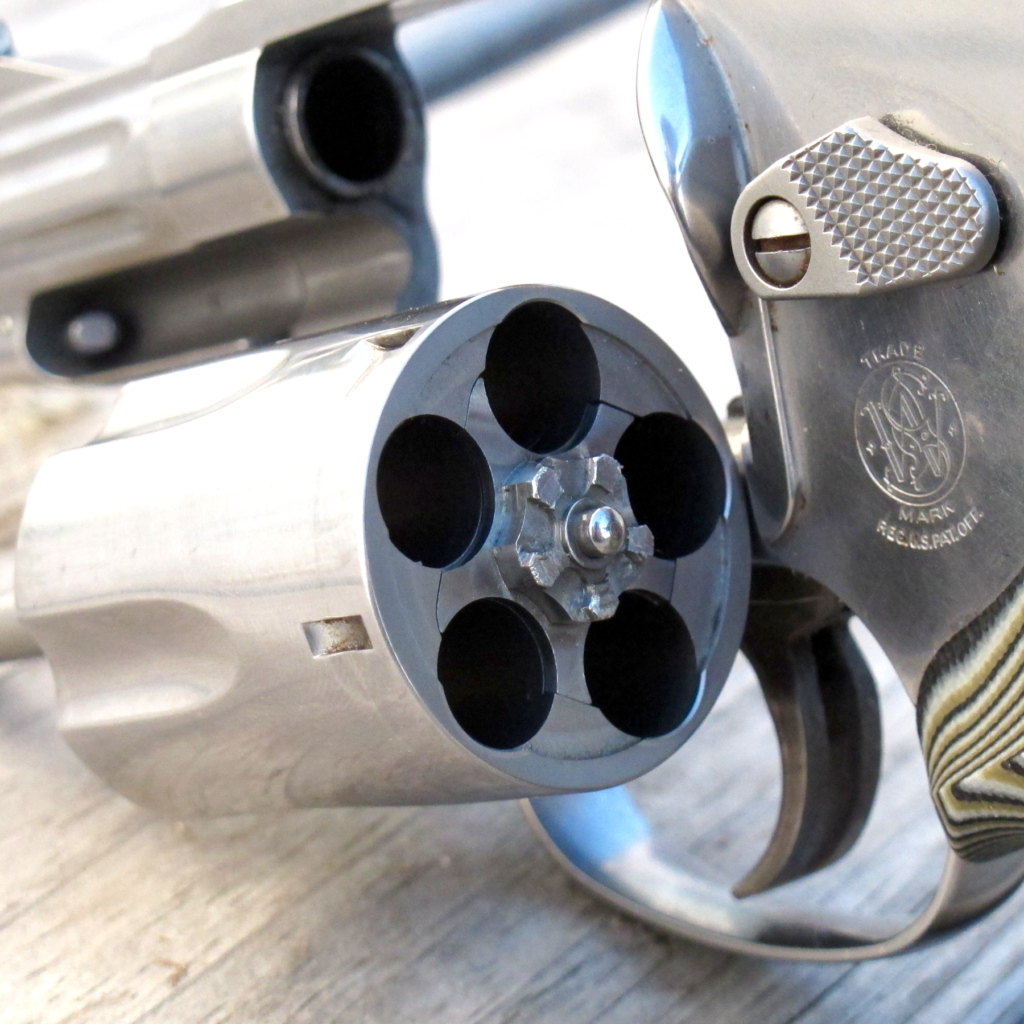 The barrel of the 640 Pro Series has something of a unique profile. It is blended smoothly with the frame and sports a full underlug. The underlug is also gently tapered at the muzzle end. This cuts a rather distinctive profile as well as (perhaps) making the barrel a little easier to slip into a holster. The front-sight pedestal is also rather bold, especially for a J-Frame. It is dovetailed for the front sight which allows windage adjustment – again, something almost unheard of on a J-Frame. Perhaps the most visually arresting feature of this little barrel are its flutes. The utility of these is debatable, except perhaps as a weight-saving measure. Regardless, I find the fluting an interesting design decision and an aesthetically pleasing touch. 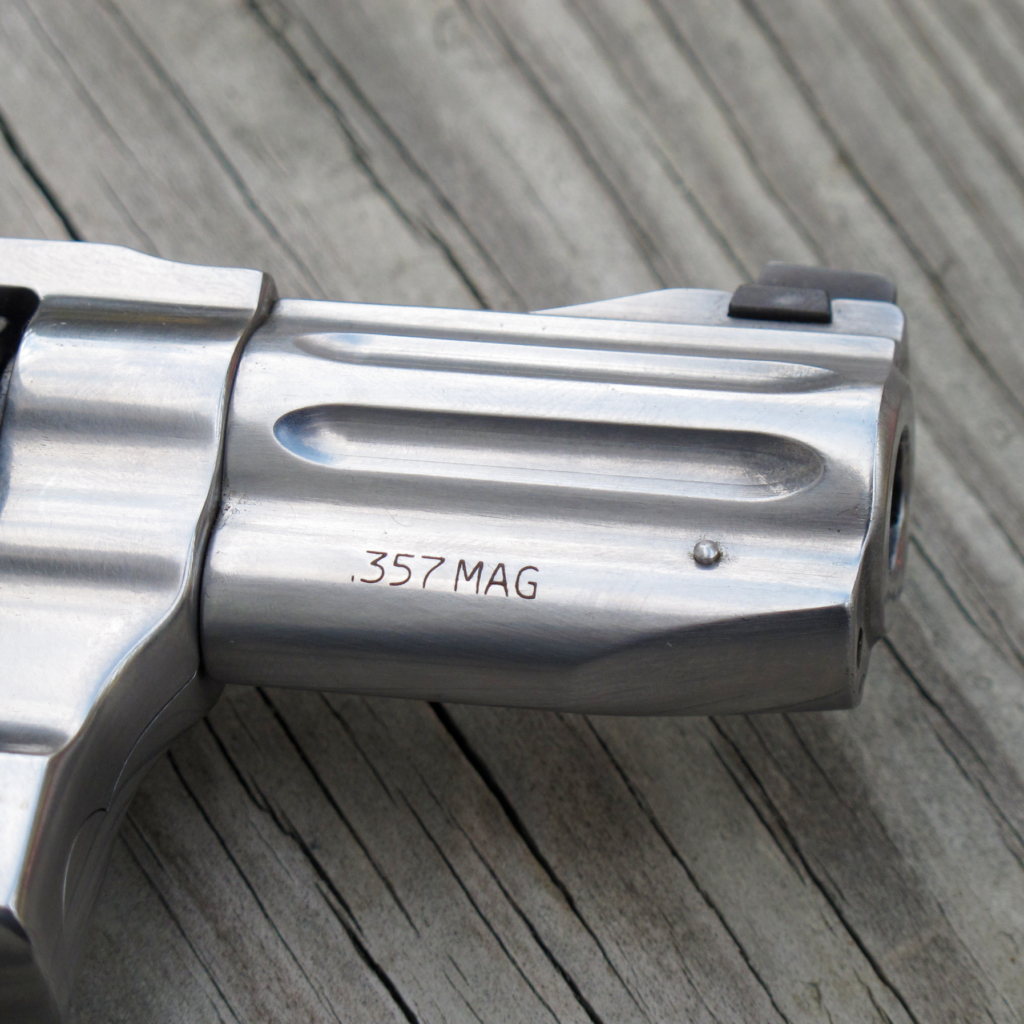 The 2.125″ barrel offers another major benefit over the more typical 1.875″ tubes: the use of a full length ejector rod. This aids greatly in positive ejection of spent cartridge cases. The standard J-Frame rod is significantly shorter. It is the little touches like these that make this revolver worth its asking price – at least to me.

I chose to modify this gun slightly (hey, nothing is perfect, right?) from its factory configuration.  The first modification was the installation of the grips you see on the gun: Tactical Diamonds from VZ Grips. I also installed the Duty/Carry Spring Kit from Apex Tactical Specialties.  I’ll cover both the grips and the spring kit in upcoming articles.

Stay tuned for Part II of this series. I’m going to talk about shooting and carrying the 640 Pro Series, the holsters I use with it, and the ammo I load it with.