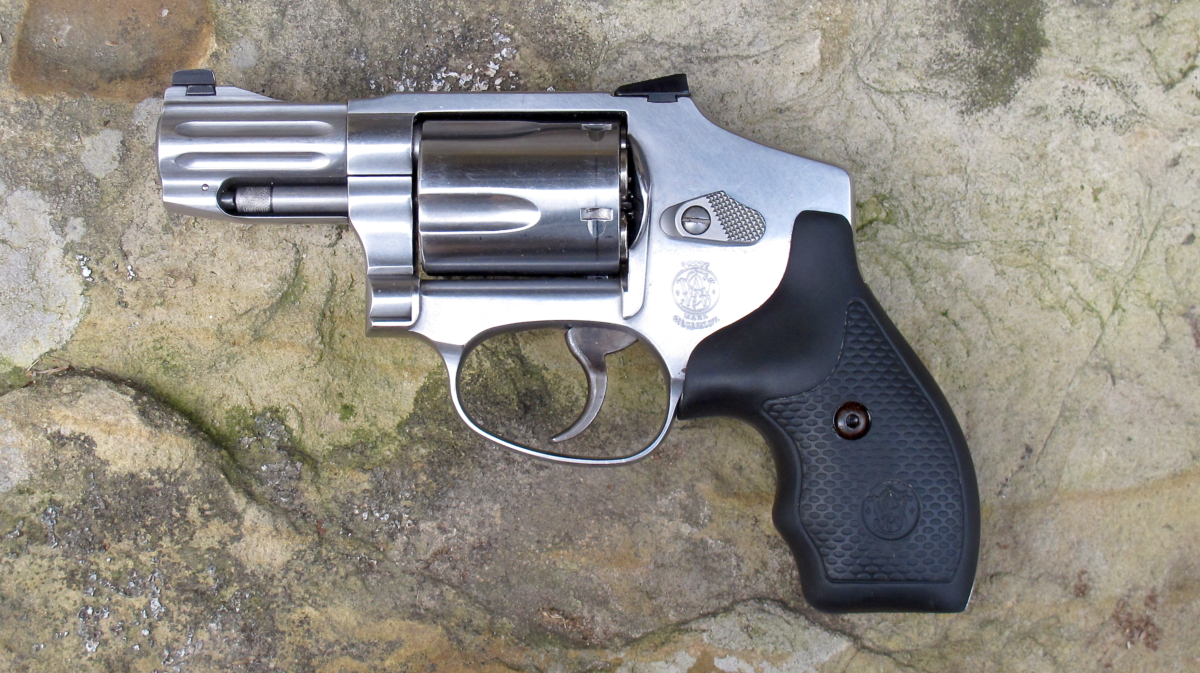 In Part I of my review of the S&W 640 Pro Series I covered its features. In Part II I am going to discuss the 640 Pro from a shooting and packing perspective. If you read Part I you already know I’ve carried this gun daily for over a year, so there’s not much suspense about what my conclusion is. Read on to find out why I like it.

Shooting this gun is not the pure, unadulterated joy that shooting my 686 is. It’s smaller, the trigger isn’t as good, and let’s be honest – the recoil is definitely stiffer. Additionally, it’s hard to find a grip that doesn’t result in my thumb being pounded by the cylinder release latch. However, shooting the 640 is a wholly different experience than most of the J-frames with which I’ve previously been acquainted. 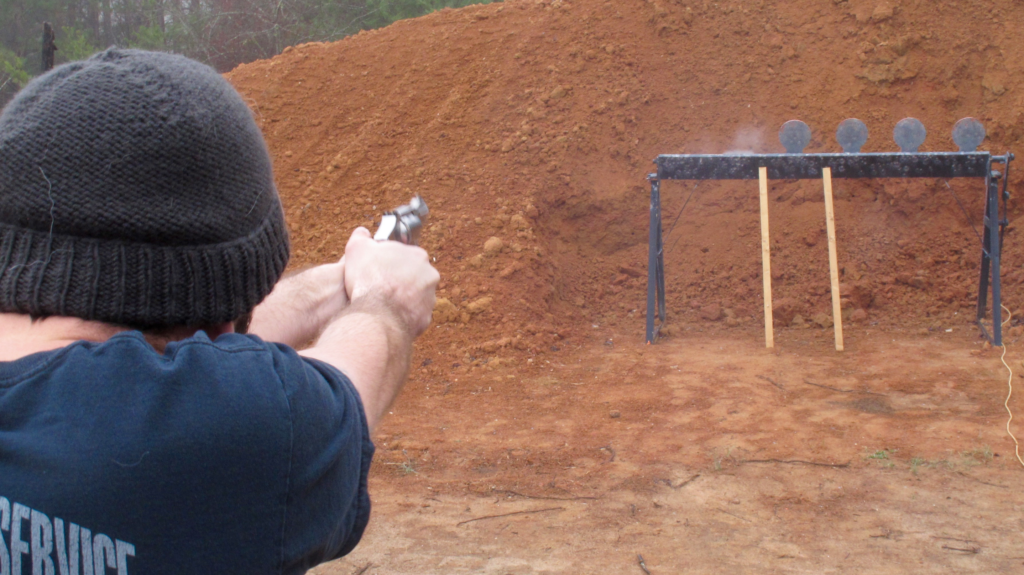 Recoil is the big question that comes to mind when I think about shooting J-Frame revolvers. The heft of the all-steel 640 Pro makes shooting if not exactly pleasureable, at least doable… with some limitations. I have fired a handful of full-house .357 rounds in the 640 Pro and it is not an experience I wish to repeat. With the .38 Special ammo, though, one could shoot comfortably all day. The mid-range loadings of the 38 +P variety are lively but still perfectly manageable.

Practical accuracy with the 640 is certainly less than can be expected from a larger revolver, but substantially better than most revolvers of comparable size. One slightly annoying thing about my 640 is the tendency to shoot below point-of-aim. Though the sights are drift adjustable for windage, there is no adjustment for elevation.

My carry ammunition is the Speer 135-grain Short Barrel Gold Dot, .357 Magnum load and there are a couple of reasons I chose it. Per Speer’s load data, this load leaves the muzzle at 990 FPS and generates 294 ft-lbs of muzzle energy¹, far below standard .357 Magnum levels. The 38 Special loads from Speer are less impressive, however. The 38 Special Short Barrel load generates only an advertised 222 ft-lbs of muzzle energy.

I decided to put these two rounds to the test over my Competition Electronics ProChrono and see where they clocked in. The 38 Special load moved out at an average 884 feet per second, producing 234 ft-lbs of muzzle energy, a slight increase over their published ballistics. The performance of the .357 Magnum load was really astounding. The average velocity of five shots was 1124 (134 fps faster than advertised). This results in 379 ft-lbs of energy at the muzzle. This handily outclasses the 38 loads while still being much more manageable than full-on .357 Magnum ammunition. 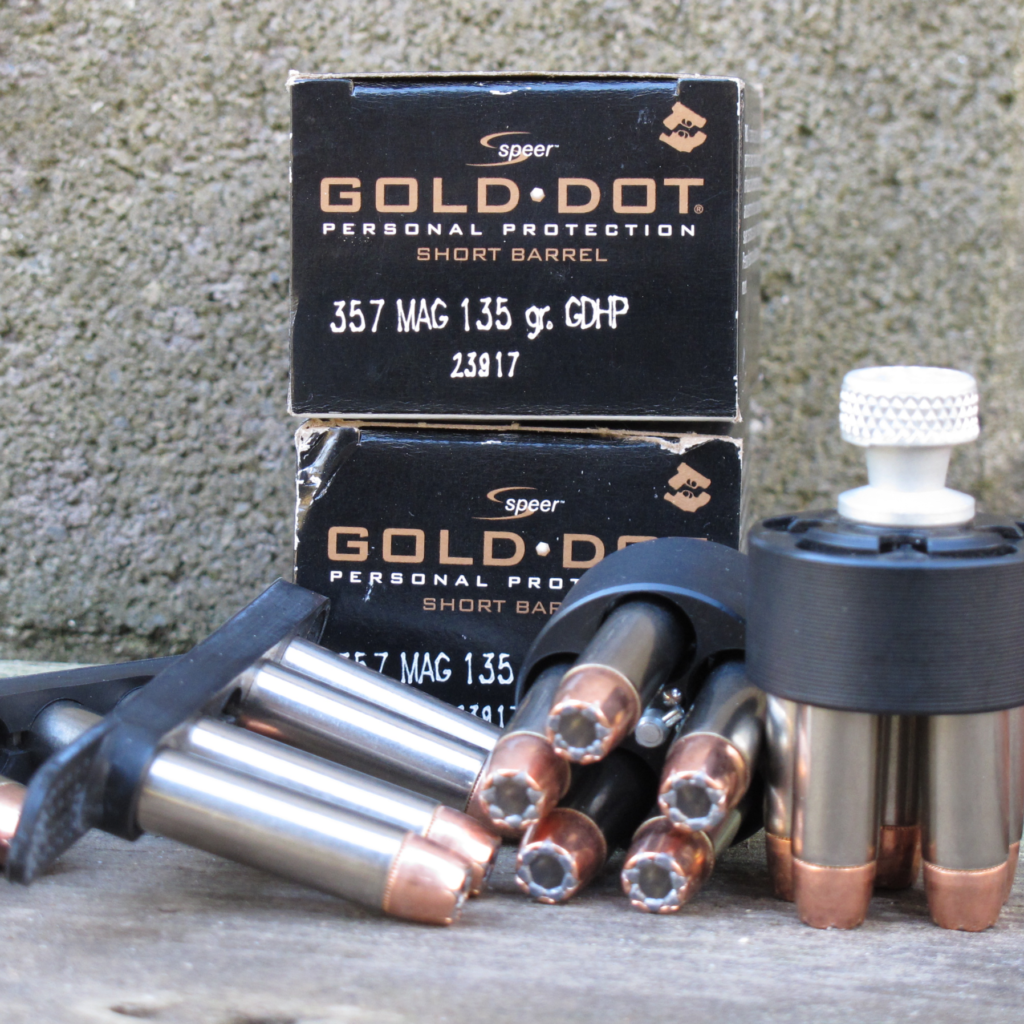 Even though each case is clearly headstamped “.357 Mag” this is what I would call a “Magnum Lite”. By comparison, it puts out only about two-thirds the energy of the full-power 125-grain Gold Dot round. The recoil and blast of the Short Barrel cartridges aren’t appreciably greater than that of the comparable .38 Special loads, and are completely controllable in my VZ-stocked, all-steel gun. Topping it off, the price difference is unsubstantial. For these reasons there’s little to persuade me that one of the 38 Special loadings would be a better option. I carry at least one reload. Sometimes these rounds are on a speedloader in a coat pocket, but usually on a Bianchi Speed Strip (I prefer these over the Tuff Products‘ version).

At 22 ounces the 640 Pro is not a super lightweight. With good leather (or kydex) it isn’t a burden at all and as the range session notes indicate, I actually like the heft. I carry from the time I get up until the time I go to bed and I don’t find the 640 pro to be burdensome. It also provides the most redeeming quality of a J-Frame: concealability.

For months I have carried the gun in a Galco Tuck-N-Go IWB Holster. Despite its low cost it actually worked quite well for carry between the 1 and 4 o’clock positions. Though I kept thinking that I wanted to upgrade to a “real” holster, this thing just kept right on working. More recently I have been giving appendix carry a fair shake, using a Dark Star Gear AIWB holster. You can a expect a full review of this holster in coming weeks.

If I had it all to do over again, would I have chosen this revolver? The answer is a somewhat equivocal “definitely maybe”. I really like this gun and there’s a lot to like. But like all gun people, I’m always on the lookout for the next best thing. For similar money, I may have gone with the Kimber K6S had it been available at the time. Though I don’t think its as handsome as the 640 Pro, having a sixth round in a package of similar size is benefit that far outweighs looks. And I’ve shot Chris Baker’s K6S and rather liked it. However, it is likely that S&W’s formidable reputation and my experience with their handguns would probably have still pushed me in this direction.

With that said, I’m pretty satisfied with the S&W 640 Pro Series and probably won’t be making any changes anytime soon. The gun shoots and carries well, and is perfectly adequate for my needs. If you want a second opinion on this gun check out Chris Baker’s take on it HERE (his article was one of the deciding factors in my decision to go with this gun).

¹All load data obtained from http://www.speer-ammo.com/ballistics/ammo.aspx