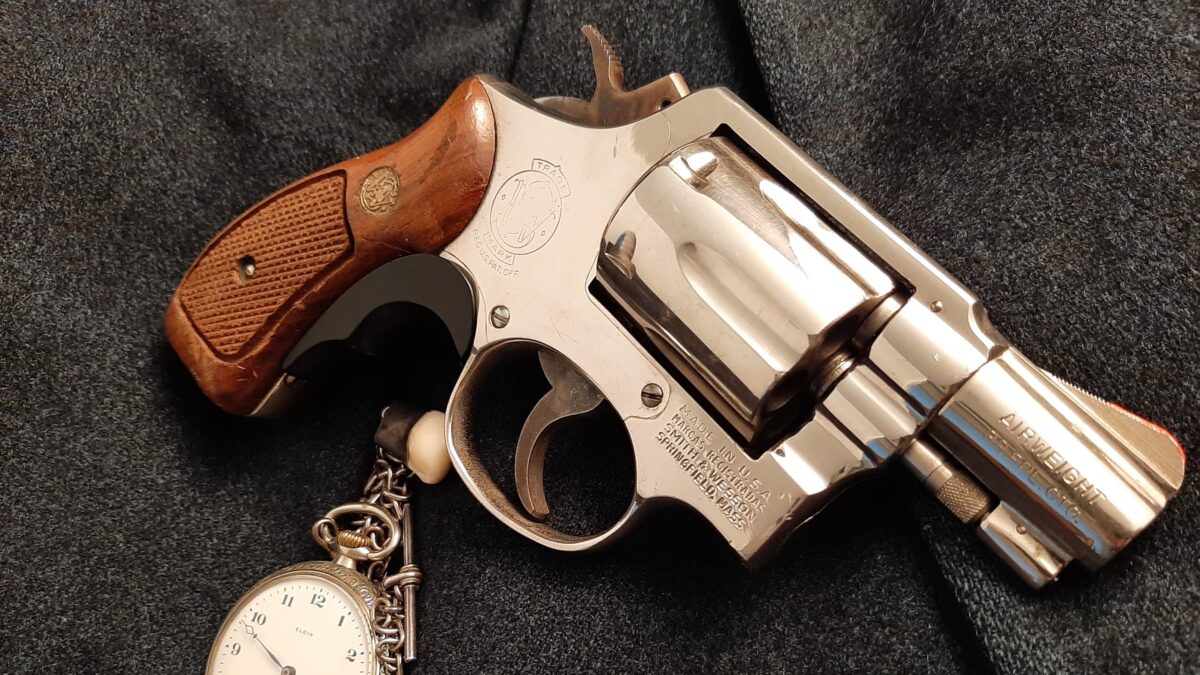 The Model 12 came to be as the Military & Police Airweight in the early 1950’s. The United States Air Force purchased just over 600 of these prototype, 2” round butt revolvers from Smith & Wesson in 1951, as the Korean War ramped up. These guns were primarily intended for aircrew use and were built with both aluminum frames and cylinders.

In 1953, the Air Force placed an order for 40,000 of these guns with Smith & Wesson. The new guns were designated M13, and were marked on the top strap with a “Revolver, Lightweight, M13” marking.

The Air Force soon had problems with the aluminum cylinders cracking, which led to the development of a lower-pressure, M41 ball load that pushed its 130 grain full metal jacket (FMJ) bullet at 720 fps out of the 2″ barrels of the M13s. Unfortunately, this didn’t fix the problem, and the Air Force scrapped the project and destroyed most of their aluminum guns. It’s unknown how many were delivered by Smith & Wesson before this happened.

dead, but not gone

Smith & Wesson kept the M&P Airweight available commercially by swapping the aluminum cylinders for steel, beginning in 1954. The cylinder change raised the weight of the gun from 14 3/8 ounces to 18 ounces, it was still significantly lighter than a steel framed M&P. The factory expanded the choices during the 50’s to include 4-inch barrels and sold both barrel lengths with round or square butts in either blue or nickel finishes (it’s rumored that some were even produced with 5- and 6-inch barrels in the late 50’s- if so, it was very few).

The Airweight K frame received the Model 12 designation when S&W went to numbers in 1957. Like all S&W revolvers, it went through several engineering changes during its production to increase the guns durability and to simplify manufacture. From an end user standpoint, the most noteworthy change occurred in 1962 (12-2) when S&W increased the width of the front sight from 1/10” to 1/8” of an inch (The wider front sight was imminently more useful for fast shooting).

Interestingly, the frame on the Model 12 was .080” thinner than a steel K frame, and the grips were not interchangeable until 1984, when the Model 12-4 production change adopted standard K frame thickness. Up to that point, the hammer and trigger on Model 12’s were also thinner, running .240” vs. .258” on a Model 10.

Model 12 production was discontinued in 1986. The Model 12 earned a solid if underappreciated reputation during its thirty-plus year production run.  The fact that it is still prized as a carry gun by revolver connoisseurs thirty-five years later speaks for its’ design.

an oldie but a goodie

It’s not unfair to call the Model 12 an old timer, at sixty-nine years of age.  It’s a basic, no nonsense carry gun, a lightweight version of S&W’s tapered barrel Model 10. The aluminum frames were assembled and fitted by hand with steel parts by experienced craftsmen. Smith and Wesson built a lot of .38 Special revolvers. They had the bugs worked out by the mid 1950’s and they knew how the post-war “short action” was supposed to feel. They had long mastered sight regulation for the trajectory of 158-grain lead bullets propelled at standard velocity. Model 12’s weren’t fancy, they were simple and they worked.

These original S&W Airweights were designed around standard pressure loads and were never rated for what we now know as +P ammunition.

Lead bullets generate less friction than jacketed ones, so higher velocity can be reached at lower pressure with lead bullets. The original spec for the .38 Special cartridge was a 158-grain lead round nose at a nominal 800 fps. You can achieve that in a 2” Model 12 with careful ammo choices. Terminal performance can be improved by changing bullet profiles to a semiwadcutter (SWC), a round nose flat point (RNFP), a semiwadcutter hollowpoint (SWC-HP), or a wadcutter.

Sticking with lead bullets is a sound practice with a Model 12- it’s tricky to launch jacketed bullets at high enough velocity to expand reliably at standard pressures, especially from a short barrel. Light for caliber (110 gr.) bullets may get there, but they won’t hit to the sights.

I have had the good fortune to stumble onto a 4” Model 12 and, more recently, a 2” nickel plated one in the last few years. No doubt I looked past plenty of them in gun stores during the last couple of decades. The humble old guns wouldn’t have caught my eye when I was younger and looking for the latest greatest thing.  That’s probably best, as I’m not sure I possessed the good sense back then to refrain from pushing the limits with ammo choices. Model 12’s shouldn’t be subjected to hot rodding.

Like lots of used revolvers, the nickel Model 12 that I recently rescued looks a little rough, but is mechanically sound. Its finish is chipped a little on the backstrap and it has some dings and dull spots. The grips are scarred up and the top of the yoke screw is discolored slightly. A collector would probably pass on it. Looking past the exterior, the cylinder is tight with near perfect lock up on every charge hole. The slots on the sideplate screws are clean and sharp and it looked like it had fired about 12 rounds when I bought it. The serial number revealed that it had left Springfield in 1975. The double action trigger pull was as smooth as you would expect for a revolver from that era.

I was at the range a while back, trying to find a suitable carry load for a small .357 Magnum revolver. I spent the better part of the morning beating myself up with various magnum loads, seeking one that hit to the sights with acceptable accuracy and recoil. My buddy Mark was very patient with this endeavor.

I finally found one that would work, so I ran a few rounds through the Model 12- almost as an afterthought. I’d been shooting from an informal bench rest with a chronograph at 15 yards, and I continued this with the Model 12. I fired six standard pressure 158 grain lead SWC HP handloads across the screens from that range. I wasn’t expecting much from the short barrel and the rudimentary nickel-plated sights, rolling the shots double action. To my immense surprise, the gun shot an impressive group exactly where I was aiming. Mark made a snide remark about me fooling around with that Magnum when I should be finding a holster for the Model 12.  I fired another cylinder of standard velocity, coated, RNFP reloads with similar results. The group wasn’t quite as good, but all six impacted where I was aiming within a 3” circle.

Returning home, I cleaned the Model 12 and put a Tyler T Grip on it. I took the time to paint the front sight and black sharpie the rear. I felt like it had earned some TLC with the way it shot. I went to an indoor range with the Snubby 12 a few days later, with some factory Winchester LRN, Remington SWC, and Remington WC ammo.  Again, the Model 12 rewarded me with outstanding performance. The painted sights helped with the poor indoor range lighting (and aging eyes). It delivered the ammo to point of aim with dependable regularity. The size of the sights and the smooth K frame action make this lightweight much easier to shoot well than the average J frame.

The blast and report of the mild .38 ammo was a welcome change from the last several trips I’d taken to an indoor range with snubby .357 Magnums. The slightly lighter wadcutters also hit to point of aim and had the least amount of felt recoil. They would be a viable option for a defense load from the Model 12. The recoil from the 158 SWC’s was more noticeable from the snub than from a 4” Model 10. It wasn’t awful, but it added up quicker. I shot about 80 rounds, and that was enough.

A steel J frame Chief’s Special actually weighs more by an ounce than the Model 12. My mind tells me it should recoil less because it’s a K frame. It handles and shoots like a K frame, but it still kicks like an Airweight. Physics demands that 18-ounce guns kick more than 30-ounce guns, despite how they feel in your hand.

I checked the websites of the big American ammo shops today for Model 12 friendly ammo. Winchester produces 158 grain Lead RN’s, SWC’s, and a flat nose cowboy load, in addition to their 148-grain match WC. Remington lists a 148 gr. Wadcutter as well as a 158 LRN and SWC. CCI markets a 158 LRN in their Blazer line, Nothing from Speer. Federal shows a match wadcutter, and a 158 LRN in the American Eagle line. I was excited to see them also offering a standard velocity 158 gr. SWC HP in their “Train & Protect” line. This would be an excellent choice for a defensive round in a Model 12.

Underwood Ammunition also has two promising offerings at standard pressure. A coated 158 gr SWC HP-GC and a coated hard cast 150 gr WC. Nice to see Underwood using Nickel plated cases and coated bullets. The nickel cases weather better for carry ammo and are not affected by verdigris, like brass casings, when carried in leather loops or pouches. The slippery coating on the bullets aids in smooth reloads.

The RCBS #14 Reloading Manual shows 5.4 grains of Alliant Power Pistol to be a maximum standard pressure charge with 158 grain lead bullets. Power Pistol gives excellent results in the .38 Special with lead or jacketed bullets. It’s clean burning and efficient with low flash and it is not position sensitive in the case. Speer’s Plinker 158 gr. washed SWC HP, loaded in once fired nickel cases, makes a fine carry load.  It exits the 2” barrel at 805 fps and hits dead on the sights at 15 yards.

Missouri Bullet Company’s 158 grain coated RNFP on the same charge of Power Pistol is good for secondary loads. The RNFP has a large meplat for shock, but the rounded ogive minimizes hang ups on reloads, especially with the slick polymer coating. They are easier to load from speedloaders than sharp-shouldered SWC’s are, when you’re under stress. They leave the Model 12 at 826 fps and strike point of aim.

Messing with these Model 12’s has shown me why they are so highly regarded. They will remind you that shot placement is more important than magnum velocity or magic bullets. They provide six rounds in a package that weighs as much as many five-round guns. That light weight makes a Model 12 as easy to carry as a J frame, with the right holster. The K frames’ good sights and smooth trigger make them easier to shoot well- a big plus in a concealable handgun. Nickel plating may be old school, but it protects a  firearm, carried close to the body, from rust as well as any modern coating.

There are lessons to be learned- if you pay attention to old timers.