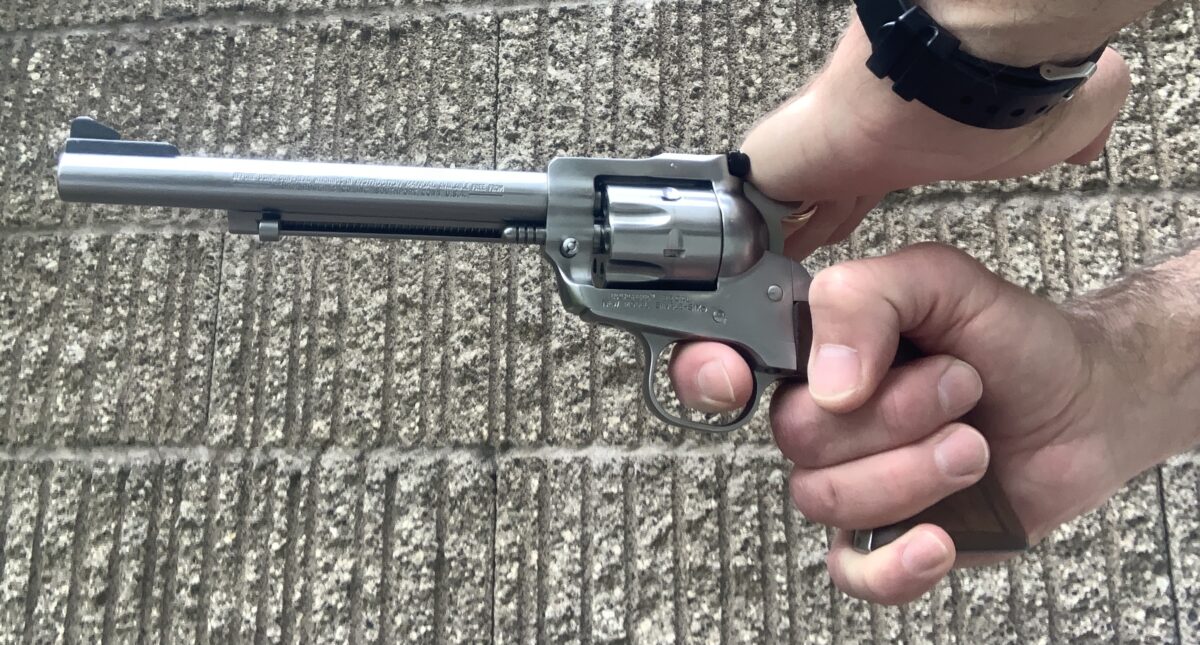 We’ve been talking a lot lately about the tremendous surge in demand for guns and ammunition, that began in the Spring of 2020. It’s the biggest gun story of the past year, and it certainly affects all of us as consumers of guns and ammunition.

The “Great Gun Crisis of 2020-2021” has dramatically increased the ranks of gun owners in America, and has simultaneously introduced many people to revolvers for the very first time. Whether they’re first-time gun owners, or seasoned gun owners who just bought their very first revolver, a lot of Americans are taking their first steps as RevolverGuys (which I use generically, to include all you RevolverGals out there) and discovering the joys of these great guns.

One of our readers recently suggested that these revolver newbies could benefit from some general tips and advice on how to handle and operate these guns. We’ve certainly done lots of instructional articles at RevolverGuy about how to safely grasp, hold, unload, function check, reload (here, here, here, here, and here), decock, and dry practice with your revolvers, for example, but I liked this idea of doing a more general, “Revolver 101” article that would collect some of the bits and pieces about handling and working with revolvers that don’t fit neatly into other categories.

So, without further delay, here’s some thoughts on various revolver dos and don’ts for our newest, revolver-totin’ brothers and sisters.

Our first stop on this journey is a pet peeve of mine, and of every other serious RevolverGuy—flipping the cylinder shut on a double action revolver.

You’ve seen this maneuver before on TV. The character is holding a double action revolver with the cylinder open, and he decides it’s time to close it up. Instead of just pushing the cylinder into the window, like he should, he rapidly flips the revolver onto its side, so the heavy cylinder slams shut with great drama . . . and stupidity. 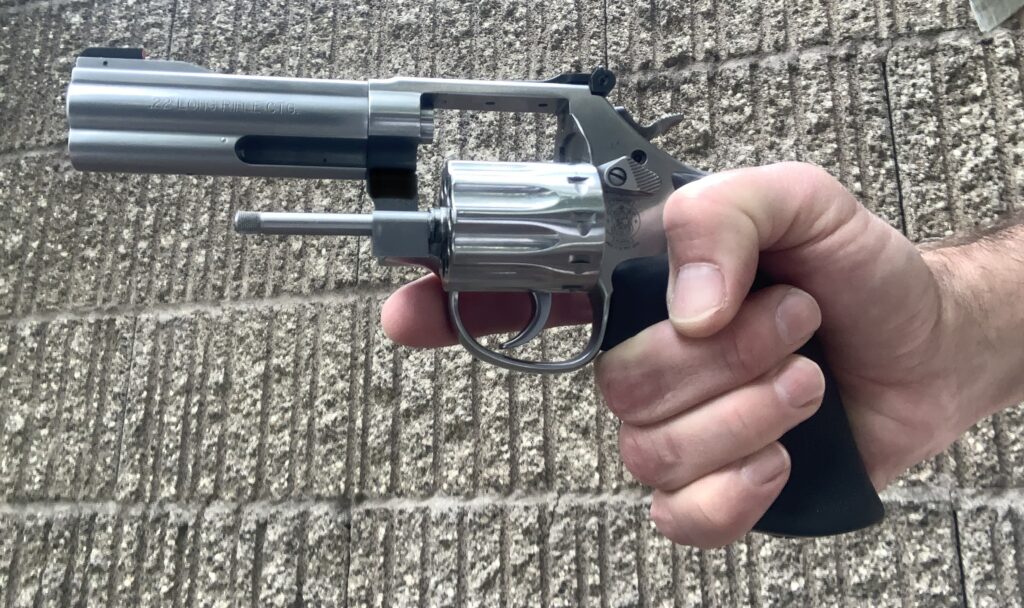 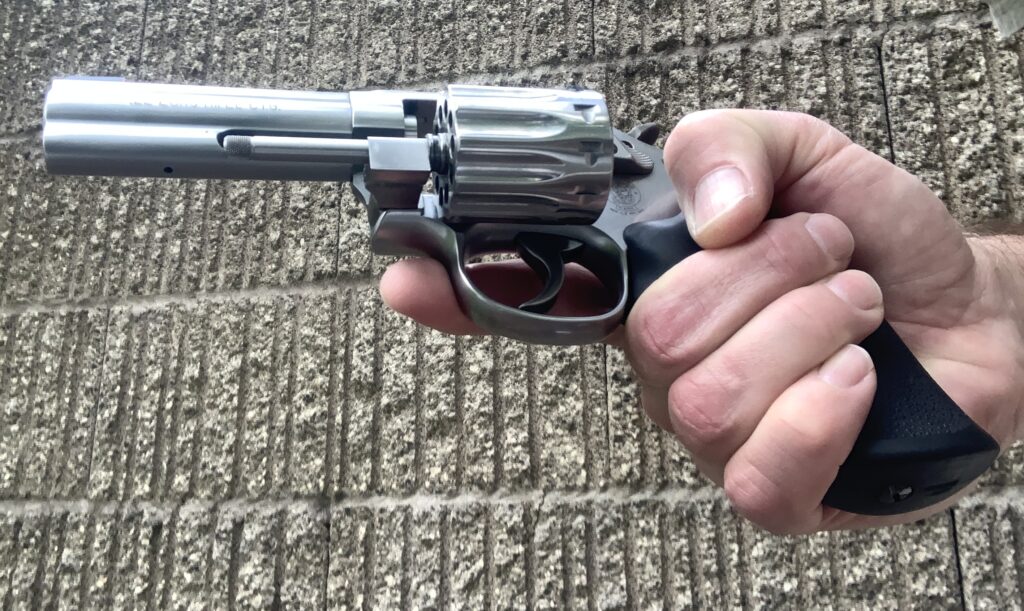 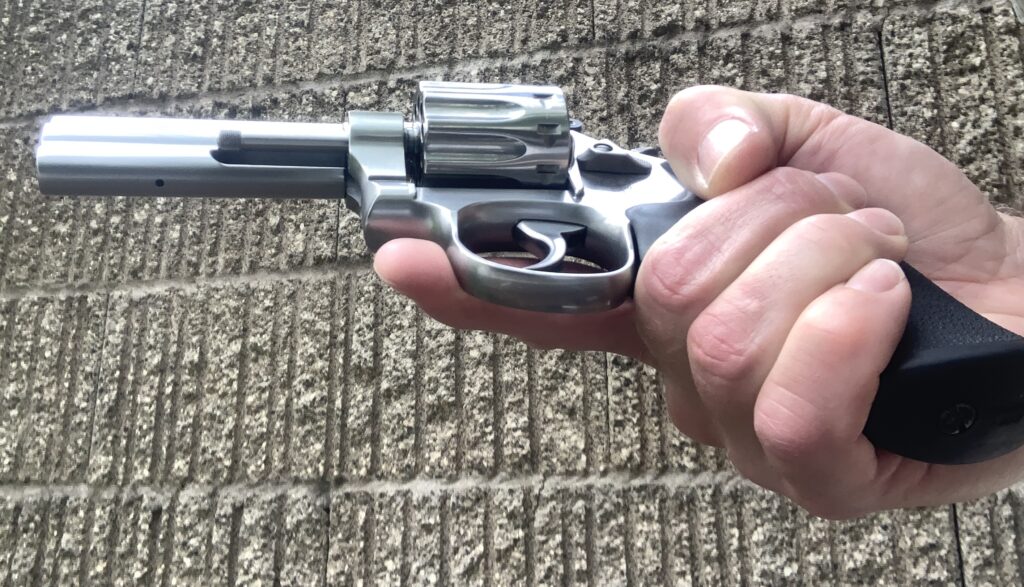 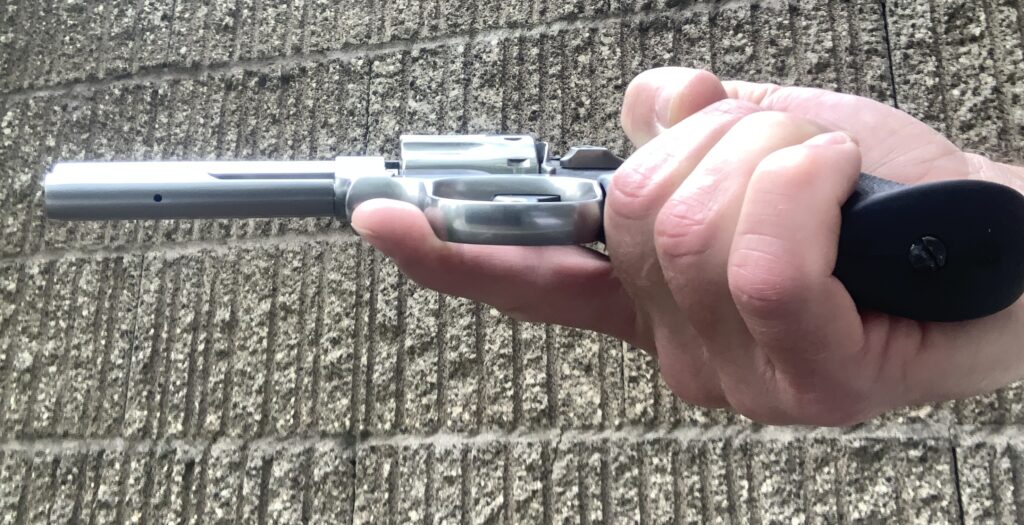 These maneuvers can damage the crane or yoke of your revolver, the cylinder stop, the ejector rod center pin, and other important parts, so please, please, PLEASE, don’t do this. As RevolverGuy Darryl Bolke likes to say, “every time you do that, a puppy dies.”

The kissing cousin of the flip maneuver is slapping the cylinder shut, often with the intent to have the cylinder still spinning when it closes into the frame. 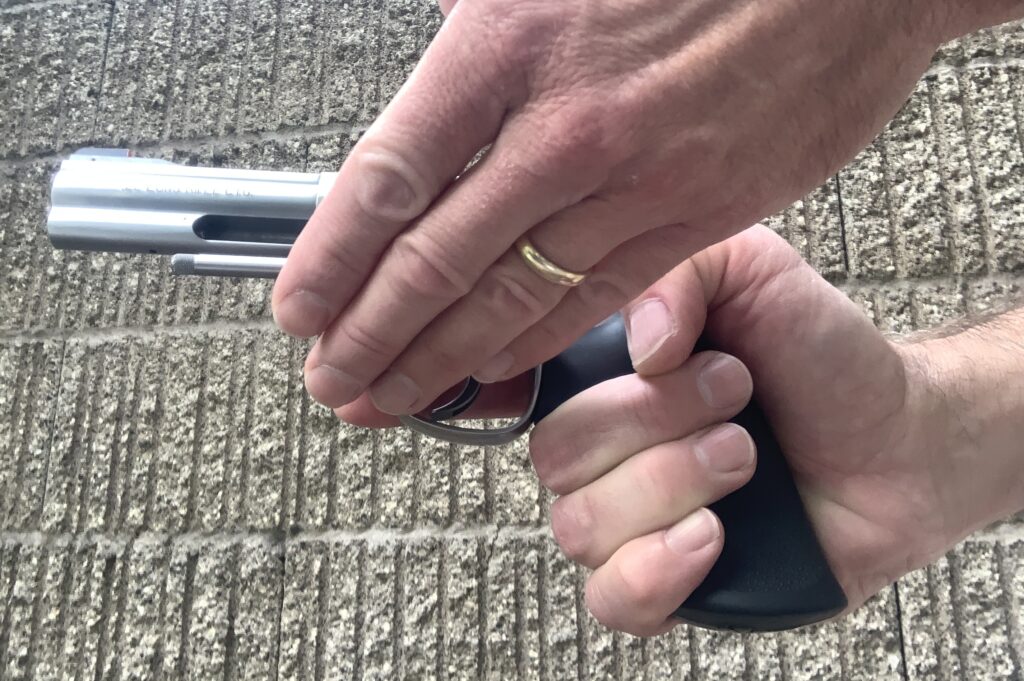 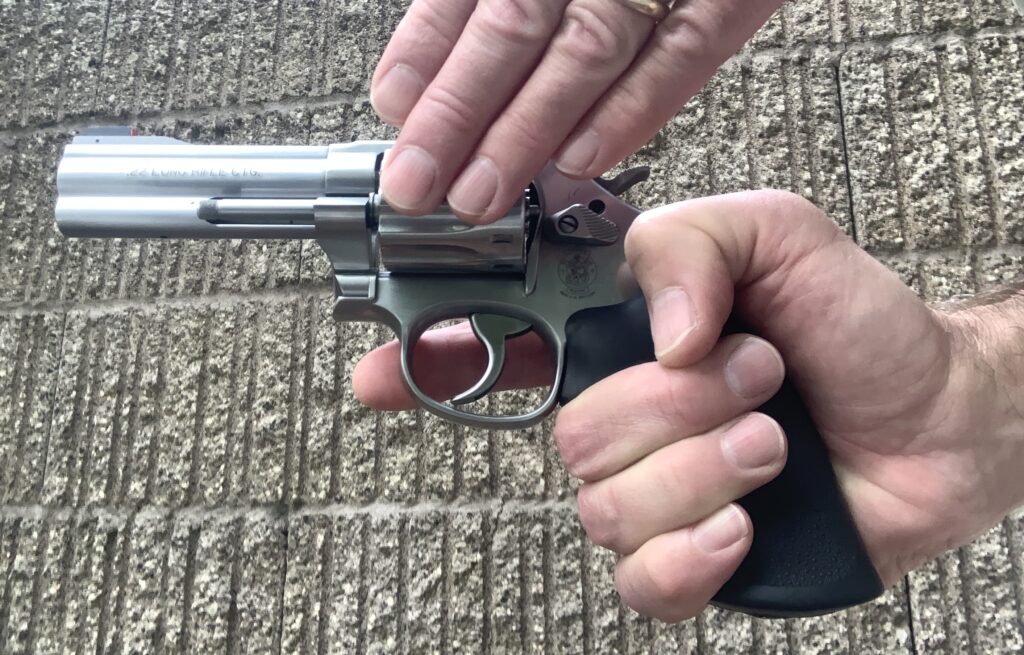 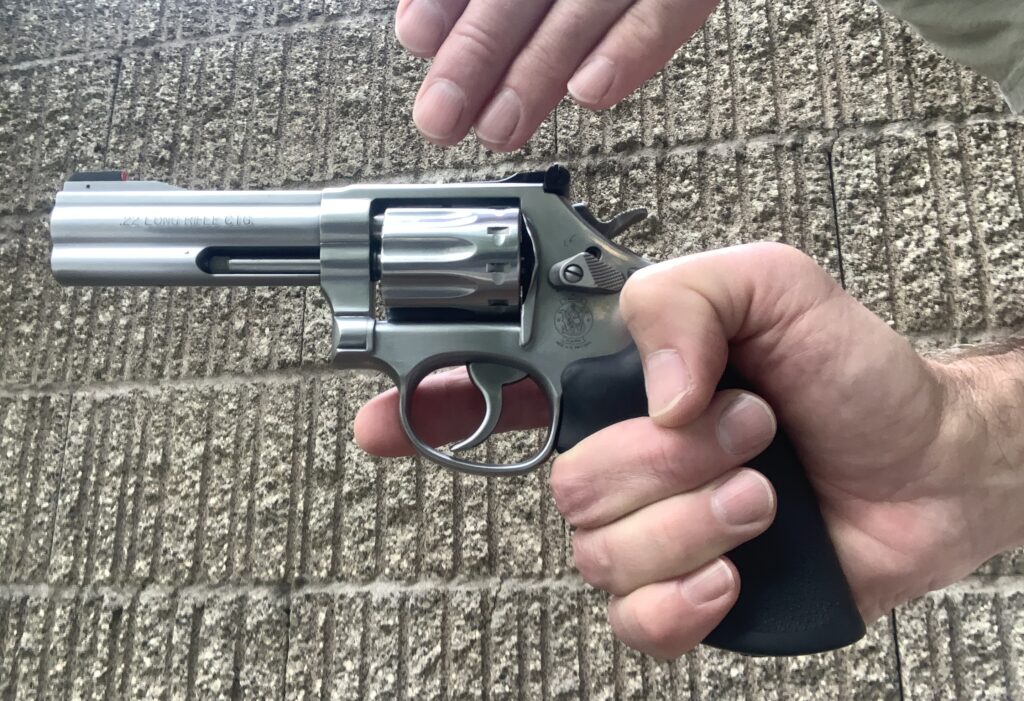 This is just as dumb a maneuver as the flip, and possibly more damaging. If the cylinder is spinning ‘round when it’s closed into the frame, the cylinder stop will take a beating and the stop notches on the cylinder will probably get peened and damaged. You might also damage the yoke, center pin, and other parts. There are few ways you can destroy the delicate timing on your revolver more quickly than slamming the cylinder into the frame with a flip or a slap.

This is simple: When you close the cylinder on a double action revolver, you don’t want the cylinder to be spinning, and you don’t want to use excessive force. It can roll under the control of your thumb as it closes, but you don’t want it spinning. You can be firm and deliberate without being abusive, and it will make your revolver last much longer.

Revolver Great Jerry Miculek reminds us that it’s also important to get the sequence right, when you’re opening your double action revolver.

Single action revolvers don’t have swing-out cylinders, but that doesn’t make them immune to being damaged by a careless handler.

One stupid move that you’ve probably seen on TV is to wind up and give the unlocked cylinder a spin, like you’re trying to pull start a lawn mower. With a loud buzzing sound, the cylinder whirs round and round, like a spinning game wheel, until it slowly runs out of steam, and comes to an exhausted halt with a click, click . . . click. 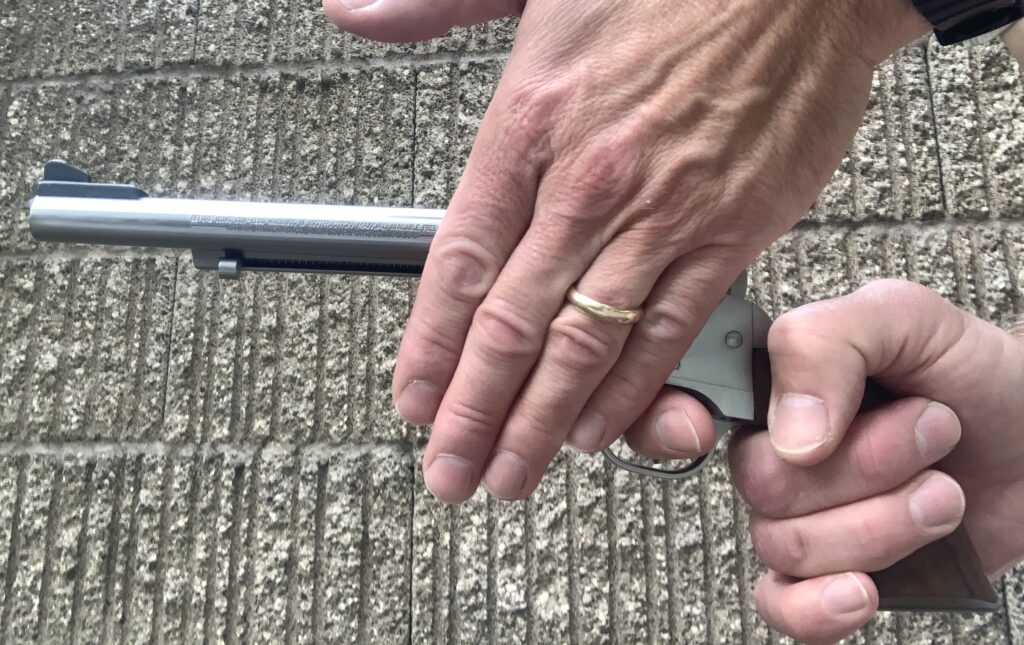 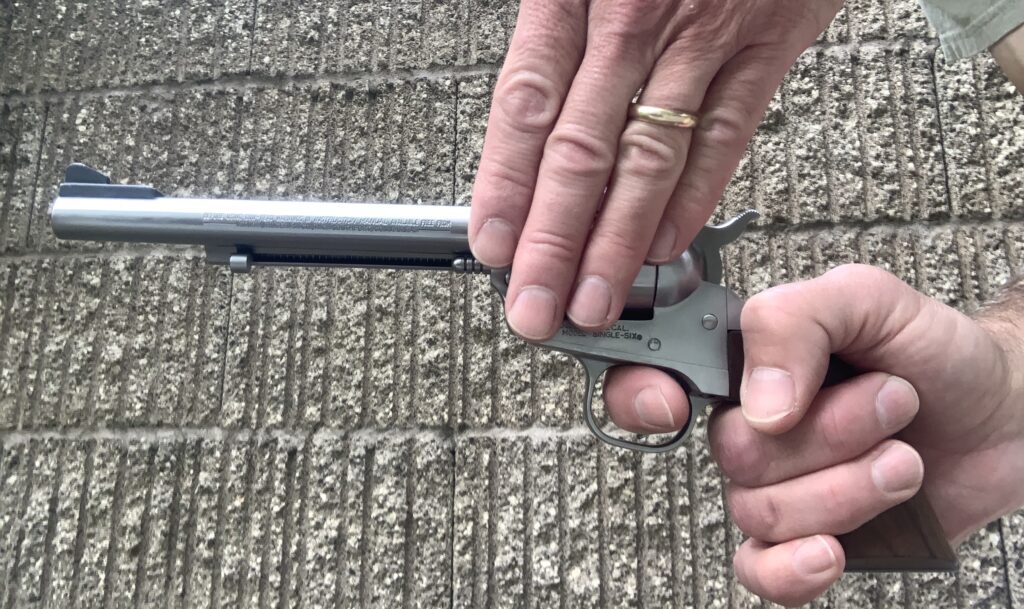 Congratulations, you just abused the delicate parts on your gun. The only thing you could have done to make it worse is to slam the loading gate shut, or cock the hammer to full cock while the cylinder was spinning round like a roulette wheel–that would have completed the injury.

Use some care and deliberation when you rotate your single action cylinder for loading or unloading, and don’t try to spin it rapidly for effect, OK? There’s no reason to do it, and it’s not cool, it’s just silly.

If you want to go the extra mile, and look like a real savvy RevolverGuy, try to line up the notch on the cylinder so that the stop falls directly into place when you close the loading gate—that will save it from having to drag on the cylinder and the raceway leading up to the notch, before the cylinder locks up. That’s a pro’s move, there.

Another single action sin (that unthinking people sometimes attempt on double action guns, too) is to hold the trigger back and rapidly “fan” the hammer spur with your support hand, like all those celluloid heroes on the big screen. This move always looks great in the movies, and delivers surefire results against hordes of baddies, but in real life, you’re just wasting ammo and damaging your gun (not to mention your hand—more than one person has cut themselves on a sharp edge, or pinched their hand, when attempting this move). 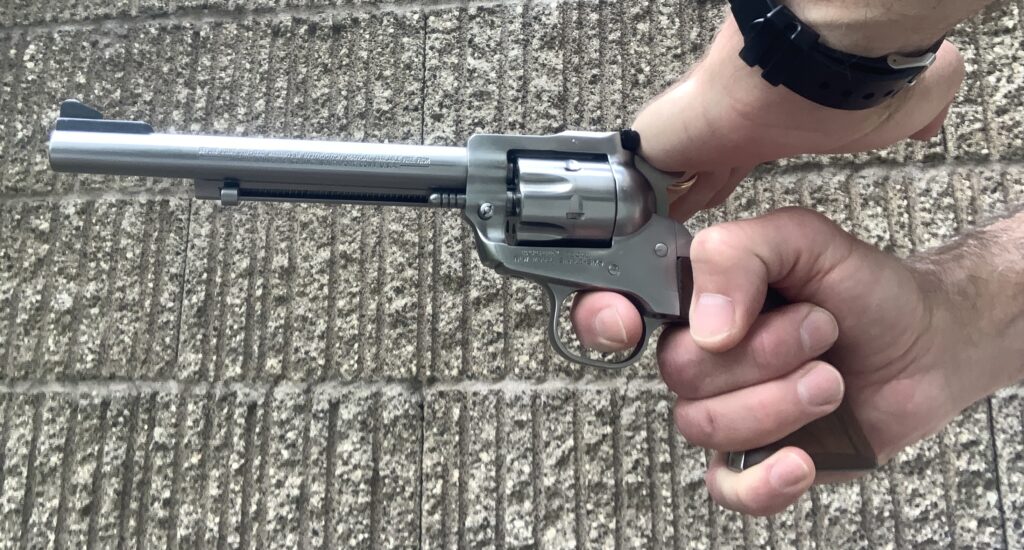 When you slam a hammer back into full cock, on either a single action or double action revolver, you start the cylinder turning fast, and it builds up a lot of rotational inertia. All that mass comes to an abrupt halt when the cylinder locks up, and it causes a lot of stress on the stop and the stop notches on the cylinder (seeing any trends, here?). It’s also not great on the surfaces where the sear and hammer make contact with each other.

Therefore, it’s far better to cock a revolver to single action with a smooth, steady, and slow draw of the hammer, than to slam it back with a rapid, jerky motion, as you do when you cock it too quickly or fan the hammer spur. Take it easy when you cock that thumb buster, partner!

We love our rimfire revolvers here, and we want them to last a long time, so we try to limit the amount of dry fire that we do with them.

If you dry fire your rimfire revolver with nothing in the chamber, the firing pin can strike the narrow shelf inside the chamber that the rim of your cartridge rests against, when it’s fully chambered. This can deliver a real shock to the firing pin, when the steel tip of the pin slams into the steel shelf in the chamber, and it can cause it to chip or break. It can also disfigure the shelf inside your chamber, and possibly peen it badly enough that it will prevent your cartridge from being easily chambered.

In centerfire revolvers, we often use snap caps to help cushion the fall of the firing pin, and preserve the health of our revolver as we safely conduct our dry practice. However, there aren’t many good snap cap options for rimfire guns. Some of the products on the market are good for “action proving,” which means you can use them to practice loading and unloading the gun, but they aren’t really designed to withstand many impacts from the firing pin in dry fire. Others are robust enough that they’ll withstand regular strikes, but it’s not clear how much protection they offer to the firing pin itself. They’ll protect the chamber, but not necessarily the firing pin.

An economical way to resolve this dilemma is to visit your hardware store and buy a package of plastic, #4 drywall anchors. These are typically yellow in color, and about 7/8” long, and they fit the chambers of .22 caliber rimfire revolvers just dandy. Because they’re plastic, they’ll cushion the firing pin tip nicely, while protecting the chamber. The yellow color will also help to identify them as training tools for safe dry practice.

You’ll chew up the plastic rims with repeat strikes, so you’ll want to rotate them periodically for best effect, and will need to toss them if the rim gets too ratty, or looks like it’s going to separate. When you’re done with your practice, you’ll also want to check the chambers and bore of your gun very carefully, to make sure that you don’t have any stray pieces of the drywall anchor left behind.

With regular use, however, they’ll help to keep your skills sharp and your revolver in good working order. We highly recommend the use of snap caps in both your centerfire and your rimfire revolvers, and think the drywall anchors are a super option for the latter. Give them a try and let us know what you think.

A thorough treatment of the task of cleaning your revolver is beyond the scope of this article, and we’ll probably tackle it as a standalone piece sometime soon, but you need to keep your revolver clean to keep it working efficiently.

Your owner’s manual will be a good place to start on this, but those are notoriously brief about maintenance responsibilities. Every brand/model will have its own unique requirements, but here’s some general areas of concern for all revolvers:

• Keep the ratchet clean, for proper operation;
• Keep the chambers clean, to avoid issues with sticky case extraction or rounds that won’t seat fully in the chamber by gravity;
• If you have a revolver with an external hammer, keep the hammer channel clean, to avoid the hammer or action binding on debris like balls of pocket lint;
• Take the grips off when you clean, to prevent rust from building up underneath them.

Keeping your revolver properly lubricated is equally as important as keeping It clean. A revolver that’s dry will usually work fine, but a revolver that’s lubricated too heavily will collect debris that can jam the action, and may risk contaminating the ammunition, so be sparing with how much lubricant you apply, and be exacting about where you apply it. Refer to your owner’s manual for guidance.

Some places on your revolver that will generally need occasional lubrication include:

So, that’s a pretty good roundup of dos and don’ts to get you budding revolver enthusiasts started off on the right foot.

It’s certain that I forgot something good, so I’m going to rely on my fellow RevolverGuys to keep me honest, and add their own tips and advice in the comments section, below. Make sure you check those out, to learn from our esteemed RevolverGuy brothers and sisters, and be sure to let us know if you have any questions, either by using the comments section or by reaching out via the Contact Us tab.

Shoot straight and be safe out there!