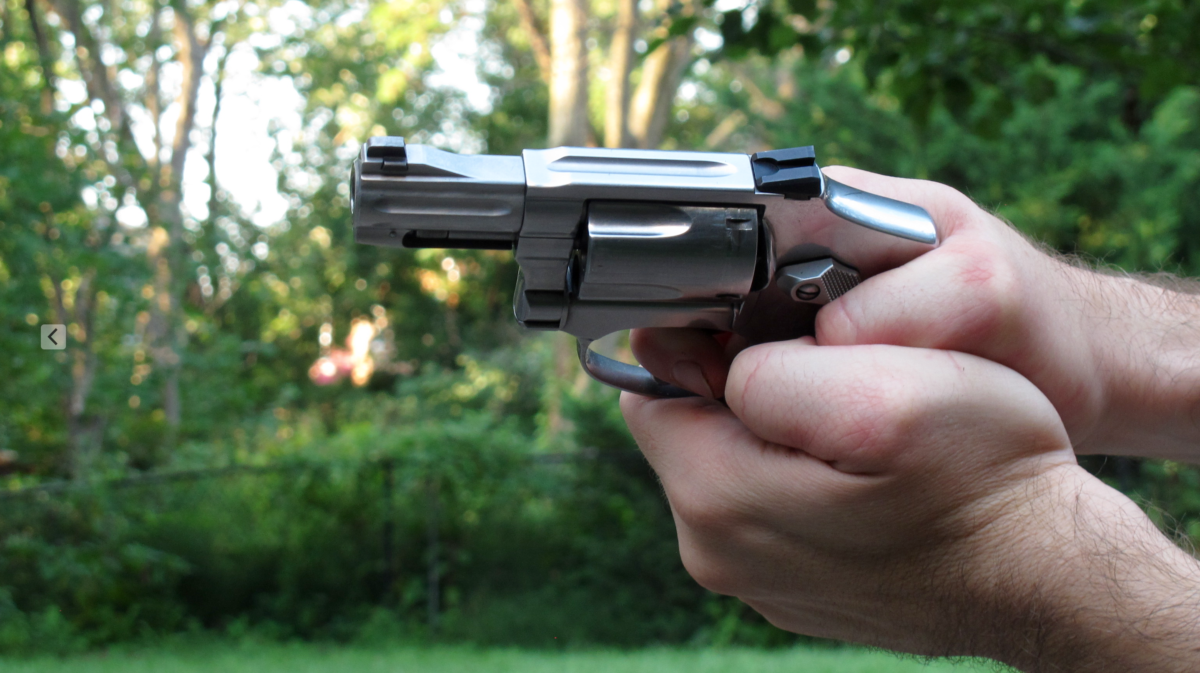 It’s been said plenty of times before, but there are a lot of pretty experienced shooters out there that don’t know how to shoot a revolver. This number seems to grow every year, as more and more people pick up the shooting sports and fewer and fewer pick up wheelgunning. In fact, a friend (who is really into revolvers) recently told me that he believes revolver mastery is truly a dying art. I mostly agree, were it not for a small handful of people keeping the skillset alive.

This post is intended to be the first in an ongoing “Revolver Guy 101” series – occasional articles covering some of the basics of revolver use. This installment is a quick reference for the two commonly-accepted revolver grasp techniques. I’m not saying this is how you have to hold a rotator, but if you’re starting from square-one these offer a pretty good starting point.

Most of our regular readers here probably know, but I have begun to distinguish the terms “grasp” (the act of holding the revolver) from “grip” (the portion of the revolver being grasped). This is to cut down on the confusion generated by using the more common “grip” to talk about both. I didn’t originate this; this distinction came to me by way of Grant Cunningham’s excellent Protect Yourself With Your Snubnose Revolver. And since we’ve mentioned grips…

For both of the techniques I’m going to cover here, a good set of grips is pretty important. I’ve previously written about several different grips for revolvers, including the ones I use: the VZ Grips Tactical Diamonds for K/L-Frames and J-Frames. Grips such as these are pretty important because they fill the area behind the trigger guard. Even the old Hogue finger-grooves in the photo below will do. 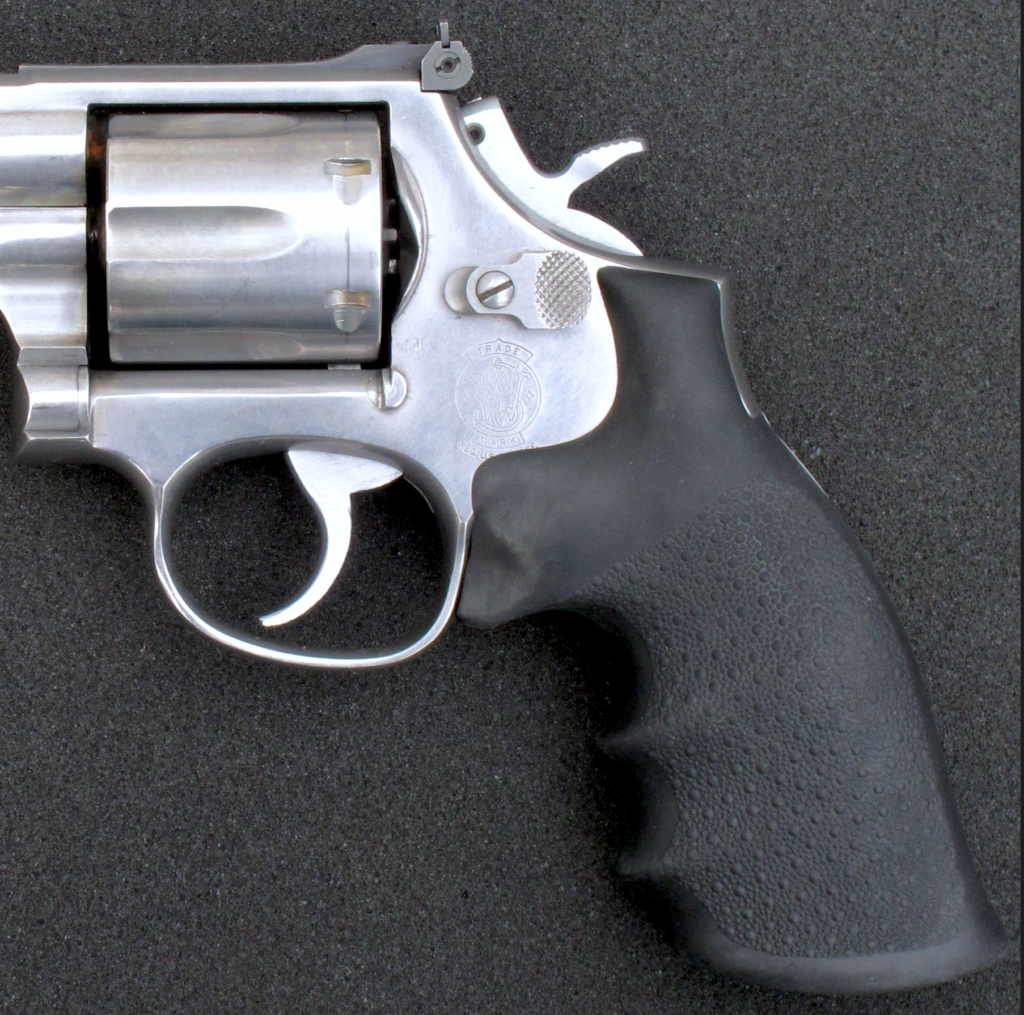 With old-style factory S&W “splinters” the neck of the grip is too narrow, and the middle finger(s) end up behind the trigger guard. It is my understanding that this style of grip was popularized when revolvers got shot a lot more in single-action than double. I know for a fact grips like these are ill-suited to serious double-action work. If you own a revolver with grips like these, and you intend to use it for defensive purposes, upgrade the grips as soon as you can afford to.

The Importance of a Good Grasp

A solid purchase on the gun is important. Holding the gun correctly will optimize the positioning of fingers and thumbs in relation to the firearm’s controls. A proper grasp (in combination with a good grip) can optimize trigger reach and travel. All of these make the use of the firearm more efficient. No less important is the ability to control recoil that is conveyed through a strong, properly-applied grasp.

An improper grasp on the revolver can cause a multitude of problems. It can cause the gun to shift within one’s grasp after every shot resulting in either a. a repositioning of the hands between shots or b. shots that are successively less controlled because of a successively poorer grip. Either of the two aforementioned problems can impact accuracy, recoil management, and speed negatively. Of course other factors (like ammunition selection and the revolver itself) also effect this stuff, grasp is extremely important. Let’s look at a couple of the most widely accepted revolver grasp techniqes: the “thumbs-tucked” grasped and the “thumbs wrapped” grasps

The thumbs-tucked technique is perhaps the most commonly used revolver grasp technique these days. This is the technique recommended in a ton of instructional media. Grant’s Protect Yourself and Lucky Gunner’s excellent “How to Use a Revolver” video are two such examples.

To use this technique, grasp the revolver as high up on the stocks as possible. The thumb of the dominant hand should be curled and end up pointed in a generally downard direction. The web of the hand should be as high up on the shoulder of the grip as possible without going over it, or interfering with the motion of the hammer. The middle finger should be as close to the trigger guard as possible. Squeeze the revolver tightly, but not so tightly that you begin to shake. 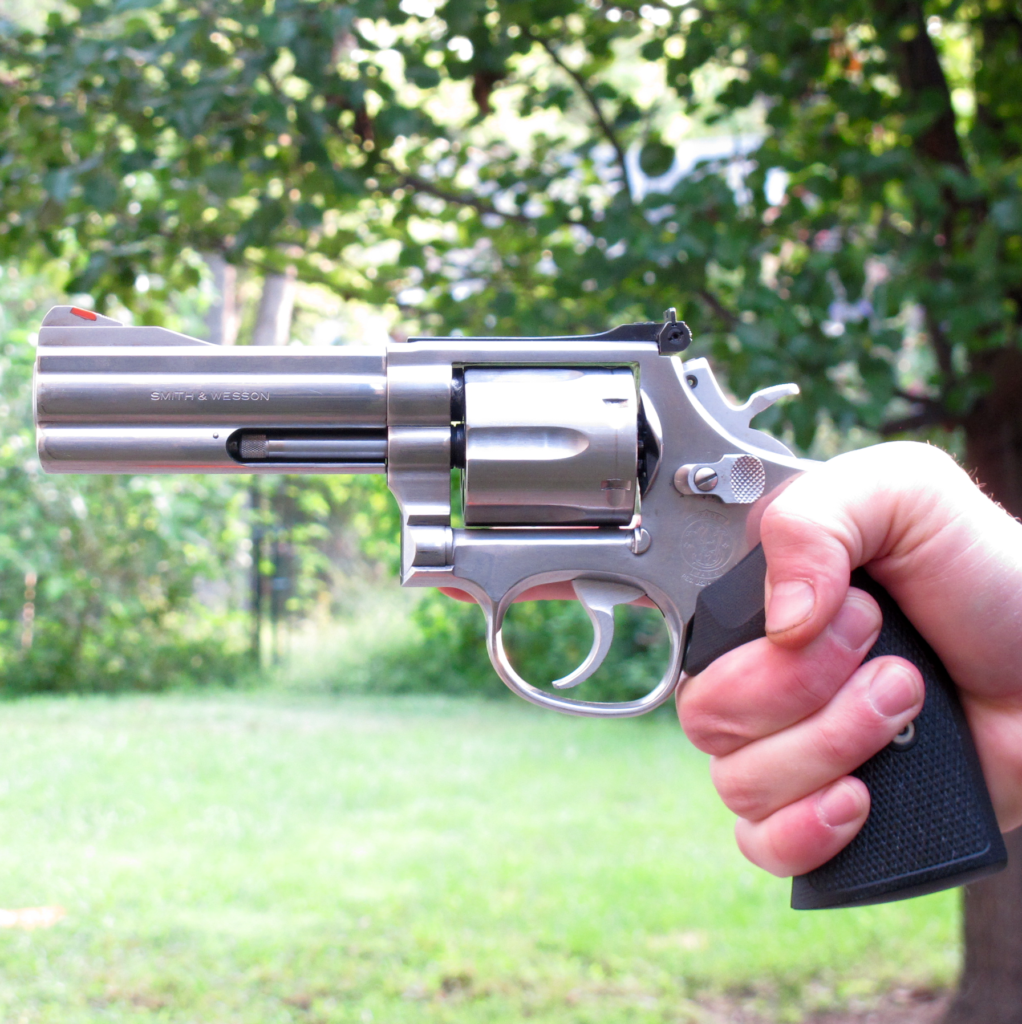 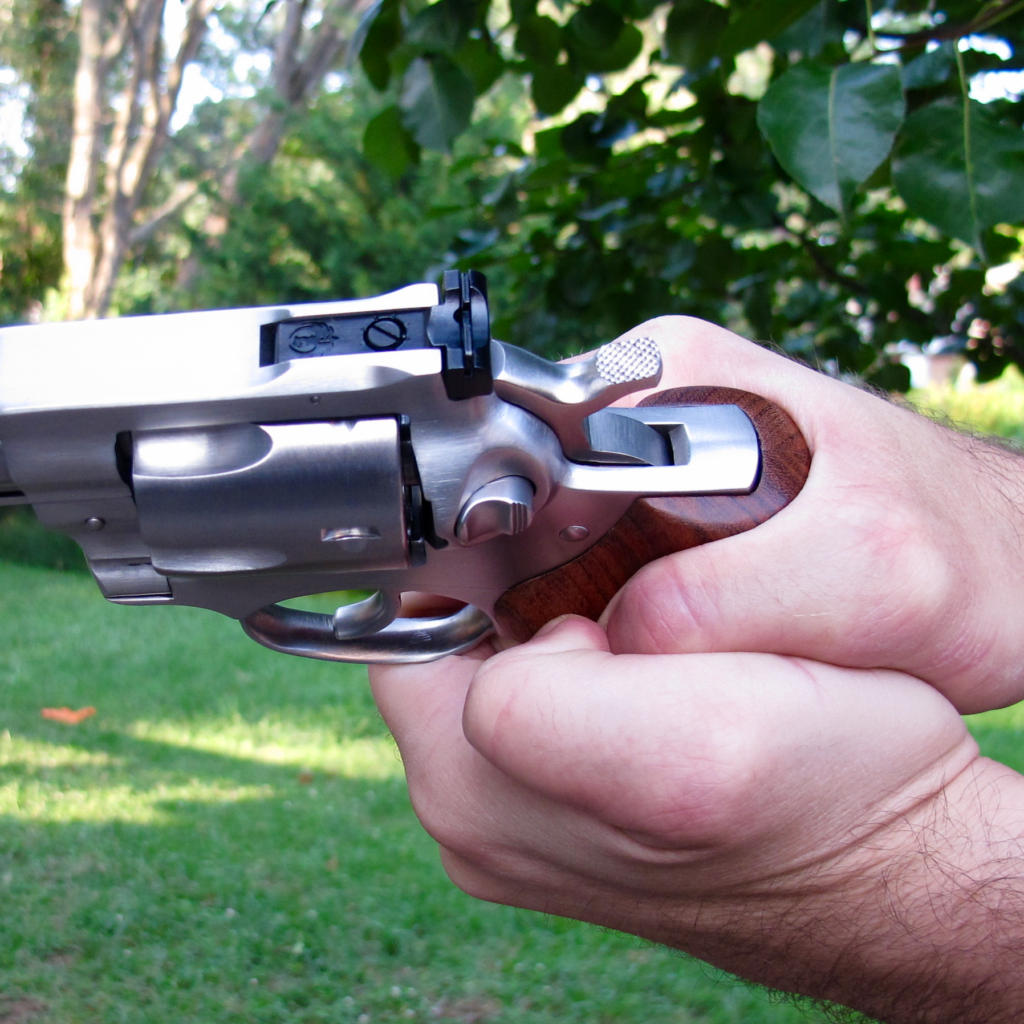 One potential problem with this revolver grasp is the thumbs interfering with the trigger finger. This is a problem I sometimes experience with J-Frame-sized guns. If you have too much finger in the trigger guard (caused or exacerbated by a too-small grip),  the first phalanx of the trigger finger may hit the thumbs, arresting motion of the finger and trigger. This can usually be corrected by adjusting the position of the thumbs slightly. Again, this is usually only an problem with very small guns or in individuals with exceptionally large hands, like the massive pair of meat-hooks shown below.

This is probably the most versatile technique of the two presented here. If you learn a thumbs-tucked revolver grasp it will also work (though not ideally in my opinion) with semi-autos, making it an okay option for people who regularly shoot both types of handguns.

This alternate revolver grasp technique begins like the first: web of the hand high on the grip, thumb curled, and middle finger against the underside of the trigger guard. The hallmark of this technique, however, is the support hand thumb wrapping over the web of the strong-hand. This offers a very strong grasp of the revolver, and feels pretty good if the right revolver is in the right hands. 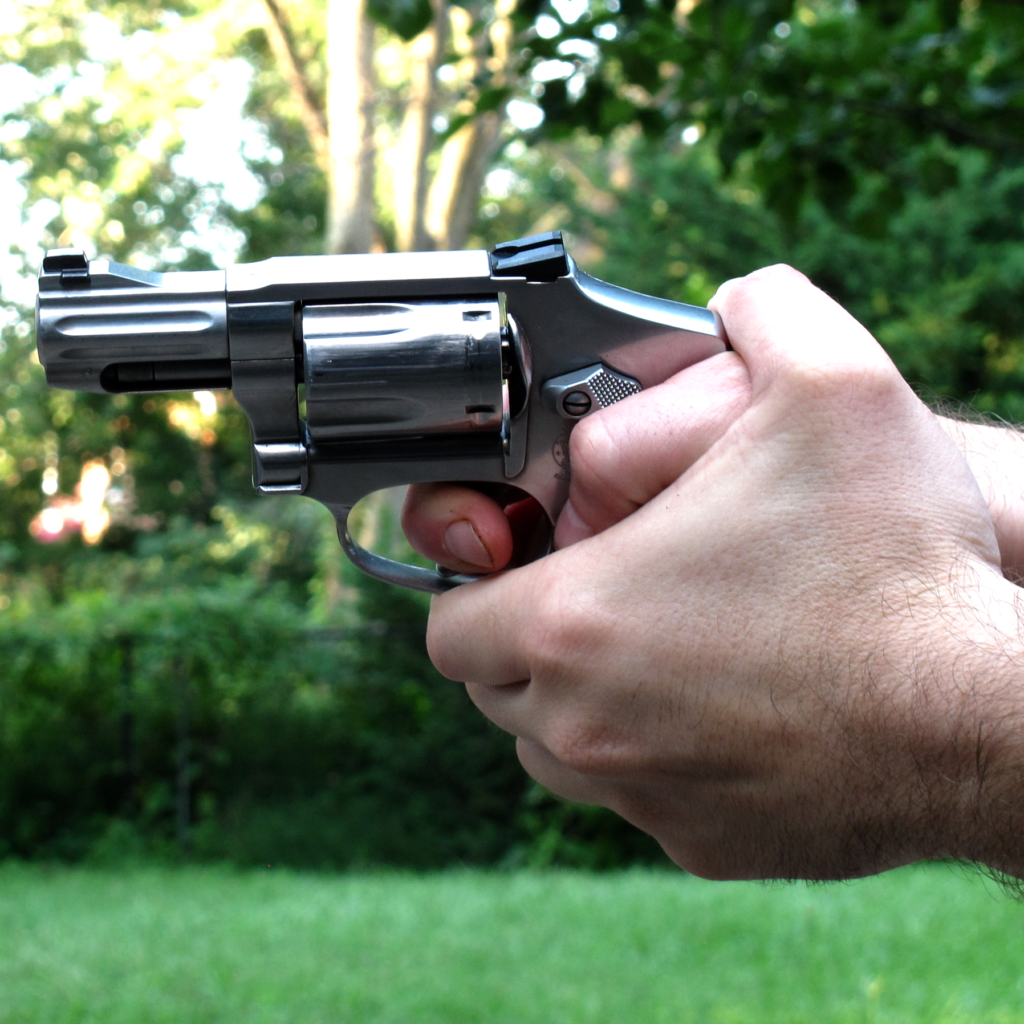 There are a couple of reasons you might not want to make this your primary revolver grasp technique. The first is if you regularly shoot semi-autos. This technique is something definitely not ideal for semi-auto handguns. If you regularly shoot and/or carry both you should pick one technique that works for, or is easily adaptable to, both.

The second reason you may be disinclined to use the thumb-wrapped technique is if you shoot revolvers in a variety of sizes. This revolver grasp technique works great on small guns like the Ruger SP101 and LCR and S&W J-Frames, but not so much on bigger wheelguns. In the photo below I am trying to use the “thumb-wrapped” technique on a gun that is too large for my hands and the grasp might not look too bad, but it feels pretty miserable. 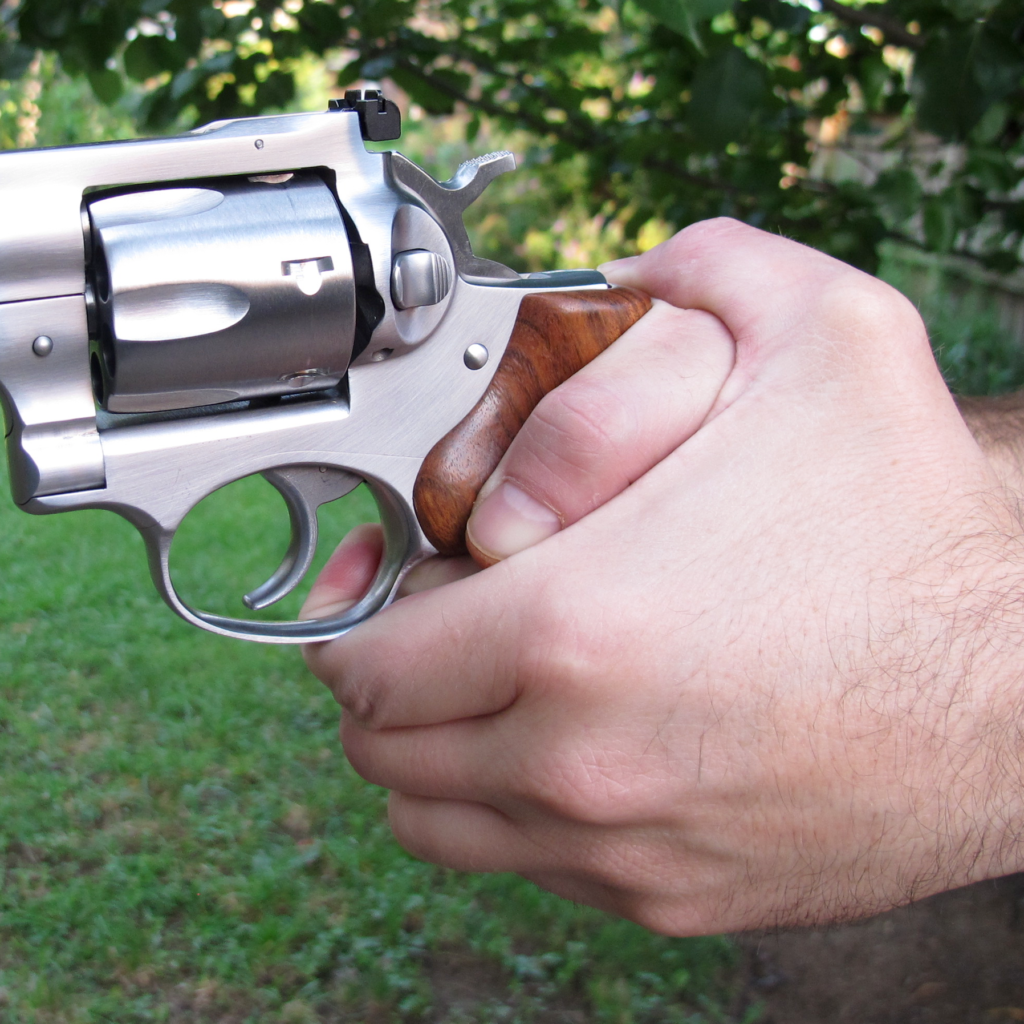 This technique is a bit more limited than the “thumbs-tucked” revolver grasp. It works better on small revolvers than big ones (depending on your hand size), and it doesn’t work well at all for semi-autos. So why in the world would you consider this revolver grasp technique? I believe it provides a sturdier grip overall if you have reduced hand strength. If this is an issue for you and you and only shoot revolvers, this might be the best option.

If you’re new to revolvers, I would recommend evaluating your situation. Do you regularly shoot semi-autos? Do you have reduced hand strength because of injury, illness, or age? Do you have exceptionally large or small hands? The answers to all of these questions are factors that should play into your decision, but your mind shouldn’t be made up until you’ve worked a bit with both. I would spend a dry-practice session or two with each. Next, I’d spend a live fire session with each of your revolvers and work both of the techniques against the clock. This should give you a pretty good idea which one is more effective for you.

Regardless of which you choose, though, I’d recommend choosing ONE and staying with it. If you’re constantly changing your technique you’ll have difficulty myelinating a single one. If you have to pull your gun under extreme stress and you haven’t automated a single technique, the grasp you get, might not be the one you want. Take some time to choose and don’t be afraid to try new things, but once you’ve chosen work the technique until it happens automatically on the draw…then work it a little more.

Some of you have noticed (and have written in about it) that I don’t use either of these techniques. I don’t, but that’s a story for another time…