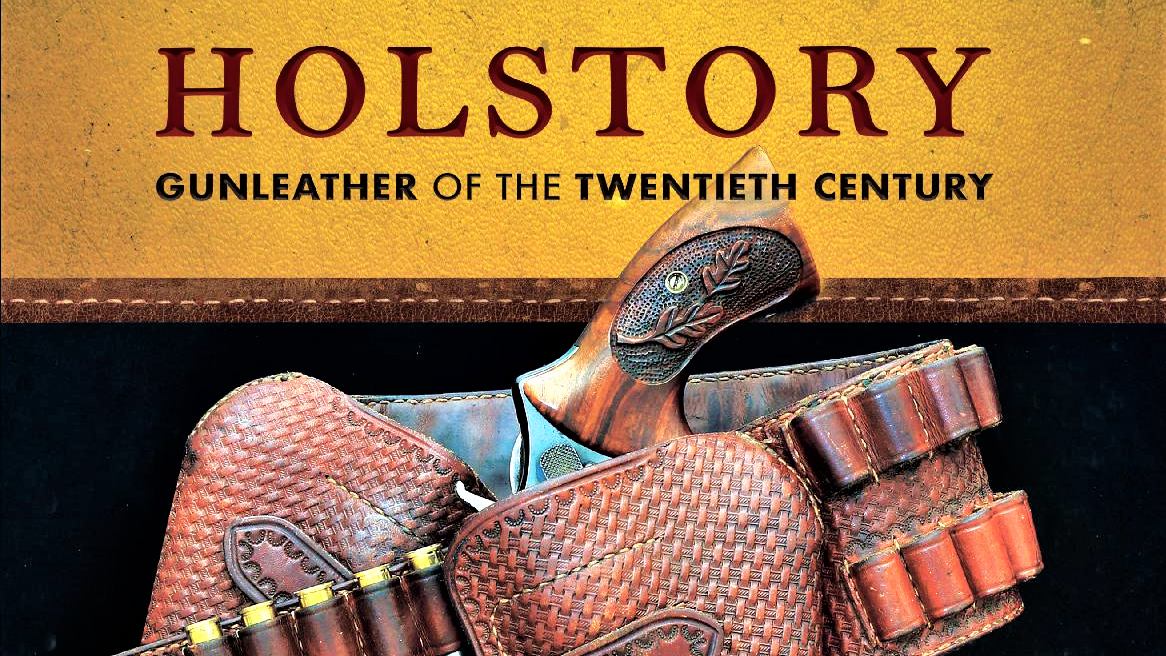 This is a book review that is long overdue at RevolverGuy.

On Christmas day in 2018, I received a very special book as a present from my family. I’d seen Holstory: Gunleather of the Twentieth Century, by R.E.D. Nichols, advertised in a magazine and knew from the moment I laid eyes on that ad that I had to have a copy. I sent my check to Nichols’ co-author here in the States, John Witty, and soon had a copy in my possession, but since it was destined to find its way under the tree, I couldn’t dive into it right away.  The cover art begged me to crack it open, but I passed it off to my wife for safekeeping and didn’t see it again until Christmas morning.

You know how there’s always one gift that you look forward to, more than the rest, during the holidays? Well, for me, that was Holstory. So, even on a busy Christmas day, with all the festivities and commotion demanding my attention, I still managed to steal away for a bit here and there to run through its pages.

What I found was remarkable.

To help explain my fascination with Nichols’ book, it’s important to understand that I’ve always been a bit of a nut when it comes to my interest in leather holsters, which started at an early age.

As a young boy, I was eye-level with all the Sam Brownes worn by my Highway Patrolman dad, and the assortment of other lawmen that I always seemed to be around. As a young man seriously afflicted with the “gun bug,” I paid attention to the hardware packed by traffic officers, military policemen, deputies, agents, detectives, marshals and police officers, and this wonderful “sickness” extended to the leather that helped them tote it around. I took note of details about how they set up their belts, whether their leather was basketweave or plain, and whether their hardware was brass or nickel. I looked for clamshell buttons, thumb breaks, and split fronts, and paid attention to grip clearance, cant, offset and other elements of holster design.

In a time before the internet, when every manufacturer and distributor of guns and leathergoods relied upon printed materials to sell their wares, I enjoyed reading catalogs from Bianchi, Safariland, Galco, and other makers, and often daydreamed about the adventures I’d get into with my favorite blaster tucked into a smart-looking holster on my hip.

By the time I became old enough to purchase my first handgun with paper route money (go ask your parents or grandparents about how this worked), I already had a pretty good working knowledge of holsters. Of course, there’s no substitute for experience, so my real education didn’t begin until years later, when I started to actually wear handguns a lot more as an adult, but that didn’t stop me from trying to learn what I could about holsters before I reached the age of majority.

I was smitten by guns and gunleather in the way that some boys are infatuated with motorcycles or sports teams, and approaching the mid-century mark, my interest showed no signs of waning.

So, given my long history as a leather holster nut, it’s probably not a surprise that I was exceptionally eager to pore through Nichols’ rendition of holster history—“Holstory,” if you will– and take the journey that traced the development of leather holsters from the very first Brill to the advanced police security holsters of the 1980s and early 1990s.

At a quick glance, the first thing a reader will note about Holstory are the beautiful, full-color images which illustrate the book. The subjects of this striking photography come from the impressive collection of John Witty, who has managed to build a comprehensive library of holsters, catalogs and advertisements from the most significant makers.

Witty, it appears, was a leather nut as a teen, too, and it’s a darned good thing he was! The readers of Holstory will greatly benefit from Witty’s lifelong fascination with holsters and associated memorabilia, which serve as beautiful mileposts on the journey through time. The samples from Witty’s extensive collection were carefully chosen to highlight the most significant developments in the history of the art of holster making, and they do a magnificent job of telling this fascinating story in visual terms.

It’s when you dive into the text of Holstory that you begin to truly appreciate the depth and thoroughness which characterize Nichols’ effort.

By way of introduction, Nichols began an apprenticeship as a holster designer/maker under John Bianchi in 1970. He spent the 1970s and 1980s developing the Bianchi Holster company’s diverse catalog of designs, before splitting off to run his own operation as the world’s first consulting-design service for the gunleather industry. He later designed and built custom holsters under his own mark before his recent retirement. His accomplishments include an impressive 50 holster patents.

Nichols is far more than a designer/maker, though. He shows himself to be part storyteller, part detective, and part historian as he leads you through the tangled development of gunleather in the 1900s. He introduces you to the players in a way that you seem to know them like old friends, and weaves the history of era into the story in a most entertaining fashion. Yet, Nichols is a stickler for details, and the text is heavily footnoted to refer to the extensive research he conducted to develop the chronology. If you have a penchant for details, you’ll be delighted to watch Nichols trace the movement of key designers from one employer to the next, or make sense of the most convoluted company histories. You’ll also enjoy watching him dissect the details of important holster designs, in a way that only a fellow craftsman could, to help us understand what makes a Brill a Brill, or what separates a holster from the Western School, from its counterpart in the Eastern School.

Filling in the gaps

I personally enjoyed the way that Nichols filled in the numerous gaps in my own understanding of Holstory, and the elements of holster design.  As an enthusiast, I had more than a passing familiarity with most of the names and most of the designs, but I didn’t realize how much I didn’t know, or how much I misunderstood about their work, until I let Nichols take me on the tour.

Shadowy figures like Paris Theodore came to light in a new way, when “Red” analyzed his work and put it in context with other developments. The unknown secrets of Tom Threepersons were entertaining to discover, as was the “lost secret” of the welt in the holster that bore his name. It was particularly satisfying to learn of the men behind the scenes—designers like N.J. Rabensburg and Walter F. Ohlemeyer–whose contributions were overshadowed by the names of the makers they worked for.

It was particularly fun for me to learn more about the holsters that I had a brush with, along the way of my own journey with gunleather: That old Hunter leather holster which served as my first “real” holster as a cap-gun-toting kid (and which I subsequently ruined, to my great embarrassment today, by cutting slots in the loop and removing the strap so it could be reconfigured as a mongrel “drop loop” of sorts); The first Roy Baker pancake holster I got my hands on—a raffle prize at the Orange County Peace Officers’ Association picnic in the early 1970s; The Hoyt that carried my dad’s 6-inch Python on duty; The Safariland western holster that still faithfully carries my cherished Ruger Single Six to this day; The assortment of #19 and #5BH Bianchi holsters that carried my guns in the early days—they’re all there, in the pages of Red’s book.

There was also a distinct surprise and honor lurking in the pages of Holstory for me—one that caught me quite off guard!

In his discussion of clamshell holsters, Red referenced the work I’d done at RevolverGuy on these neat rigs, citing my “Fighting Leather” series in the footnotes several times. I didn’t anticipate this at all, and was quite proud and humbled to think that I contributed to this monumental historical effort, even if only in the smallest of ways. Thanks Red, for including me. 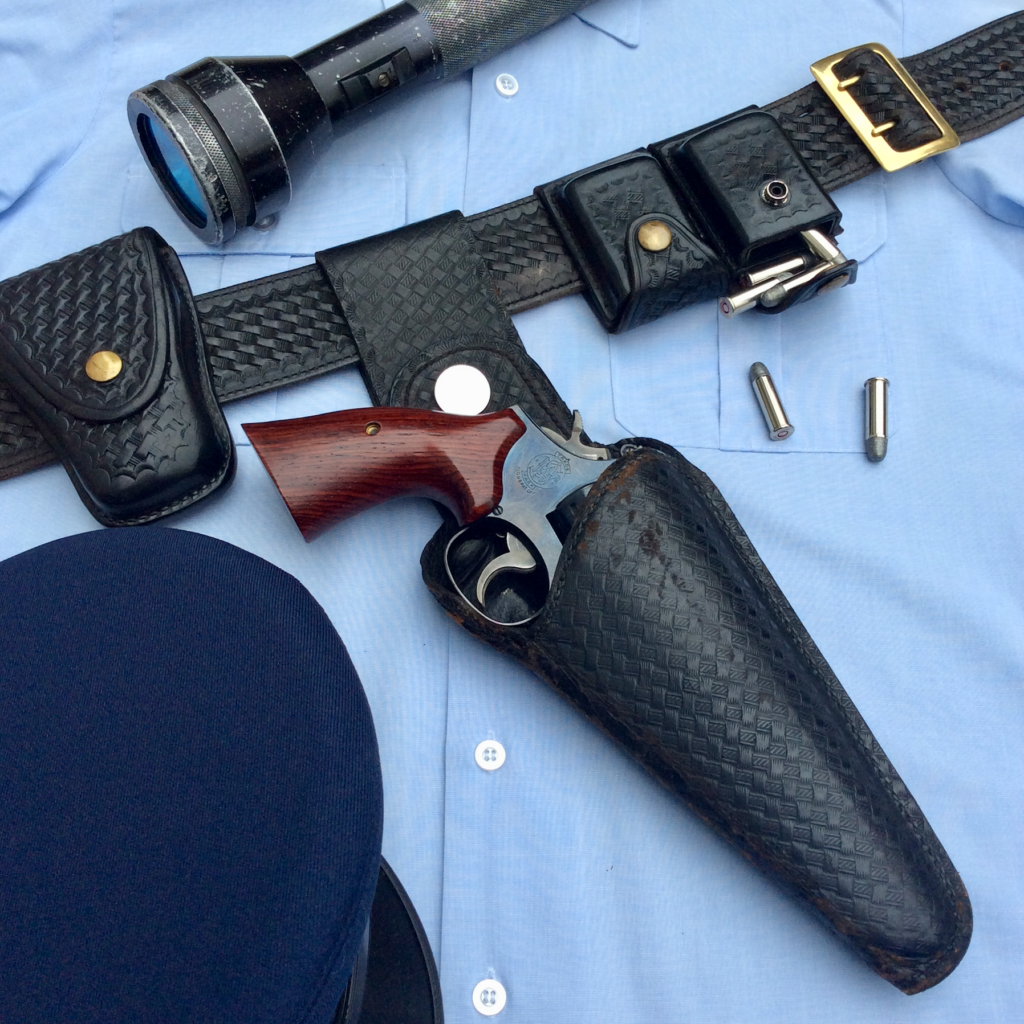 You know who you are!

While I was very pleased to see the reference, I was already sold on Holstory long before I stumbled across it in the book. Frankly, I’ve never seen anything quite like Holstory before, and was thrilled that someone of Red’s background finally tackled it.

Richard Rattenbury’s Packing Iron book on western gunleather was great and had some fantastic photography. Chic Gaylord’s Handgunner’s Guide detailed the creative designer’s thoughts on gunleather, and so did John Bianchi’s Blue Steel & Gunleather, which explored the nuances of holster design and leatherwork at a level we hadn’t seen in a general interest book, before.

Holstory tackles all of those themes with gusto, and goes much further, with a detailed accounting of the most important designers, makers, developments, designs, and technologies of the Twentieth Century boom in gunleather. If you’re a holster nut like I am, Holstory is that book you’ve been waiting for. Nothing else compares.

As you go through the rich history of holster development with Nichols as your guide, you get the real sense that Holstory was an enormous puzzle of sorts, just waiting for someone like Red to assemble the pieces in the right order, to make the picture clear for the rest of us.

I’m grateful for the effort, and know you’ll enjoy it as much as I did.  Make sure to visit Red’s website today, to order your own copy. Also make sure to check out his new blog, for more fascinating holstory!