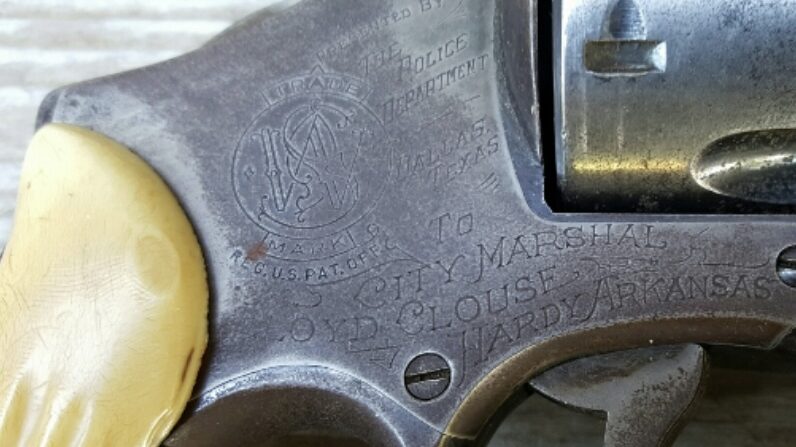 The Dallas Junior Chamber of Commerce (DJCC) is an organization of young professionals who are engaged in networking and community involvement. They have supported the city through numerous events and activities, since 1918.

One of the Chamber’s activities is especially dear to law enforcement and the law-abiding citizens they serve, because it memorializes the February 7, 1951 line-of-duty death of Dallas Police Department Officer Willis Wood “Johnny” Sides, who was slain just 21 days after graduating from the police academy, as fifth in his class.

Editor’s Note:  We’re proud to welcome RevolverGuy, and ace law enforcement historian, Tony Perrin back to our pages with another story about the men who used revolvers to keep the peace in their community, back when the round gun was King. The greater story of the revolver is about more than the technology, of course, and Tony’s latest tale provides a wealth of human lessons for all of us to pay attention to, as armed defenders. Thanks Tony! Enjoy, everybody!

In the long-established tradition of American military, fire service, and law enforcement organizations, the Chamber established an annual award which pays tribute to the fallen officer (and DJCC member), and recognizes those who continue to serve in an exemplary fashion. The Chamber’s Johnny Sides Award, honors the Dallas Police Department Rookie of the Year, and has been awarded each year since 1952.

Good folks everywhere are grateful to the DJCC for remembering and honoring this young officer, who gave his all for the people he served. It’s especially important, in today’s anti-law enforcement environment, to remember the sacrifice of men like Officer Sides, and to recognize those still in uniform. It’s especially meaningful to the men and women of law enforcement, to see this kind of public support.

RevolverGuy is grateful for the efforts of the DJCC to memorialize Officer Sides and recognize officers that are currently serving, but there’s more to the story of Officer Sides’ death than just the annual award that’s presented in his name. In fact, Officer Sides’ murder was part of a larger story, which provides significant lessons for all of us to consider.

The earliest segment of the story begins in Mississippi on December 2, 1950. On that date, Trooper E. J. Grisham stopped a stolen vehicle near Vicksburg. He placed the occupants under arrest, and, with one suspect in his vehicle, and the other being escorted in the stolen vehicle, he headed to the jail. Somewhere enroute, the trooper was shot in the neck, and left along the side of the road. His service revolver and shotgun were stolen by the criminals.1

Trooper Grisham recovered from his neck wound and was able to finish out his career in the Identification and Investigation section of the Mississippi Highway Police.

Trooper Grisham’s attackers would later be involved, along with two others, in another confrontation with police that would quickly turn deadly.

The Second Act: A “Routine Stop”

On Monday, January 22, 1951, Dallas Police Officer Johnny Sides, on his 21st day out of the academy, was on patrol with his partner, Harold L. Dawson. The officers observed a 1951 Oldsmobile, with four occupants, run a stop sign.

The Olds was pulled over and the officers approached, with Dawson on the driver’s side and Sides on the passenger side. Dawson ordered the two on his side to exit the car (these two were later identified as J. W. Johnson, the driver, and Bill Pomeroy, the driver’s side rear passenger). While the men were exiting the vehicle, Dawson spotted a rifle in the car and shouted a warning to his young partner, Sides.

Marvin Johnson, occupying the right front seat, exited the vehicle and shot Sides in the stomach. J. W. Johnson then ran around the front of the Olds, firing two shots at Dawson, striking him in the left wrist and left shoulder. Officer Sides was able to draw his service revolver and return fire.

With both officers wounded, the four took off in their stolen vehicle. Both officers were rushed to the hospital. Johnny Sides lingered with the wound in his stomach until the 7th of February, when he died from the effect of the gunshot. Dawson, who had also been with the department less than a year, recovered from his wounds, returned to work, and retired in 1973. He had served with the 42nd Infantry Division (the “Rainbow Division”) during World War II.

Both officers were awarded the Police Cross.

Hardy, Arkansas is a small town in the Ozark Mountains of north Arkansas, located on the beautiful Spring River. On Wednesday, January 24, 1951 Hardy had less than 800 residents and was a pretty quiet town. It included one of Sharp County’s two courthouses. Inside the courthouse was the newly-elected Sheriff of Sharp County, Guthrie Goodwin, who was getting settled into the new job on his 24th day in office.

Just down the street from the courthouse was the town barbershop. Inside, was barber Lloyd “Peavine” Clouse. Mr. Clouse held a second job; He served as City Marshal of Hardy. While he paid attention to the grooming of his customers, he also kept an eye on Main Street, and the goings on, along it.

Around the noon hour, he saw a black 1951 Oldsmobile pull up and park in front of Jackson’s Hardware. The car had two men in it. They got out carrying a shotgun and went into the store.

Seeing a shotgun on the streets of Hardy was not something that would cause alarm, but there was something about the fellows that caused the Marshal to go on alert. He strolled down to the courthouse and shared his unease with Sheriff Goodwin. The two officers decided they should check the pair out. The two men were at the counter trying to sell the shotgun to Aubrey and Marshall Jackson, the proprietors. Sheriff Goodwin asked the men to step outside so they could talk for a bit.

When they arrived at the suspect’s vehicle, the Sheriff was talking to J. W. Johnson, 22, and Marshal Clouse was interviewing Robert Johnson, 29. Sheriff Goodwin then began to open the car, and as he did so, Robert Johnson pulled out a German Luger, pointed it at the officers, and ordered them to get in the car, saying they were going for a ride.

Johnson’s attention was distracted for a moment, and the Sheriff took the opportunity to grab for the pistol. When he did, Johnson pulled the trigger and the bullet narrowly missed striking the Sheriff in the head—the bullet traveled through the crown of his hat, scorching his hair.

Sheriff Goodwin got his hand on the pistol once more, and another round was triggered by Johnson, this one going through the window of the hardware store. Sheriff Goodwin and Johnson, both hanging onto the Luger, went down in the street, fighting for control of the weapon. As they rolled in the road, Goodwin spotted a good-sized rock, which he grabbed and hit Johnson in the head with. That ended the fight with Johnson.

In the meantime, Marshal Clouse had his own problems with the younger Johnson. The two had engaged in gun fight, with Marshal Clouse eventually wounding Johnson with a Smith & Wesson .44 Special that is thought to have been a Third Model Hand Ejector.

Proprietor Marshall Jackson, armed with a handgun, came out of the hardware store to assist the officers. The three Hardy men then moved the two subjects to the jail behind the courthouse, and locked them up.

Marshal Clouse thought there were two others in the party, based on information given to him by a citizen. As the officers began looking for them, Clouse found them coming out of an alley, onto Main Street. He put them both on the ground at gunpoint until they could be cuffed. They were Marvin Johnson (Officer Sides’ killer), 21, and Bill Pomeroy, 19.

Sheriff Goodwin and Marshal Clouse searched the vehicle, and found several firearms and ammunition that were taken in the burglary of a hardware store in Durant, Oklahoma.

Arkansas State Troopers Add Shug and Dick Wirt arrived in Hardy, and they, along with Goodwin and Clouse, took the prisoners to a more secure jail at Jonesboro, Arkansas. There, they found out that Dallas P.D. was looking for four individuals in a black Olds who shot two D.P.D. officers, killing one, and wounding the other.

The prisoners told the officers they were a Hillbilly band from California looking for a fiddler. They waived extradition and were taken back to Texas.

Robert Lee Johnson and Marvin Eugene Johnson were electrocuted for the murder of Johnny Sides. J.W. Johnson and Bill Pomeroy were sentenced to 99 years in prison.

The State of Texas and the Dallas Police Department showed their appreciation for the two Arkansas officers in very classy style.

Clouse, Goodwin, and their wives were brought to Dallas and honored at the Dallas Police Awards Banquet on February 13, 1951, with more than 800 in attendance. The Arkansas visitors were guests in one of the best hotels, and were given the Keys to the City. During the event, the Dallas Police Chief, Carl F. Hansson, bestowed a new nickname on Sheriff Goodwin, announcing that he would forever more be known as “Rocky.”

Sheriff Goodwin and City Marshal Clouse were presented with Smith & Wesson .357 Magnums (pre-Model 27s, with 3.5-inch barrels). Marshal Clouse’s gun was engraved, “Presented by the POLICE DEPARTMENT of DALLAS, TEXAS — To CITY MARSHAL LLOYD CLOUSE of HARDY, ARKANSAS,” and Sheriff Goodwin’s gun was similarly engraved, with his title and name. They were also given cowboy hats and tickets to the Cotton Bowl. Sheriff Bill Decker, of Dallas County, commissioned them as Deputy Sheriffs.

Not to be outdone, the Arkansas Legislature introduced a bill to supply Sheriff Goodwin with a 6-month supply of rocks (rocks are pretty cheap in the Ozarks)!

Years later, while showing me his father’s Smith & Wesson, Marshal Clouse’s son pointed out a crack in the frame. Since it was unusual to bust an N-frame, I had to ask how it happened. He said his brother became interested in reloading a long time ago and one day he over did it.

The story provides a host of lessons for us RevolverGuys, including, but not limited to, the following:

Stay safe out there and never forget those who gave their lives for others.

Tony is a native of the Arkansas Ozarks. He started in law enforcement in 1976, and worked for two municipal police departments. In his last job, Tony worked as a State Park Officer for 32 years. Tony was a Firearms Instructor at two of the agencies, and received an FBI letter of Commendation for his role in the capture of an FBI Top Ten fugitive. Tony has researched and documented line of duty deaths in Arkansas for over 25 years, has served as a historical consultant to the U.S Marshal's Service since 1983, and has served as a guest curator at the Old State House Museum, for the award-winning exhibit, "Badges, Bandits & Bars: Arkansas Law & Justice." Tony has been a speaker, for over 30 years, on the History of Crime & Law Enforcement to museums, civic organizations, historical societies and law enforcement groups. He has also appeared on The History Channel, in "The History of the U. S. Marshal's Service." Tony is a Life Member of the NRA and a dedicated revolver aficionado! He does have a couple of Browning Hi Powers, though! View all posts by Tony Perrin