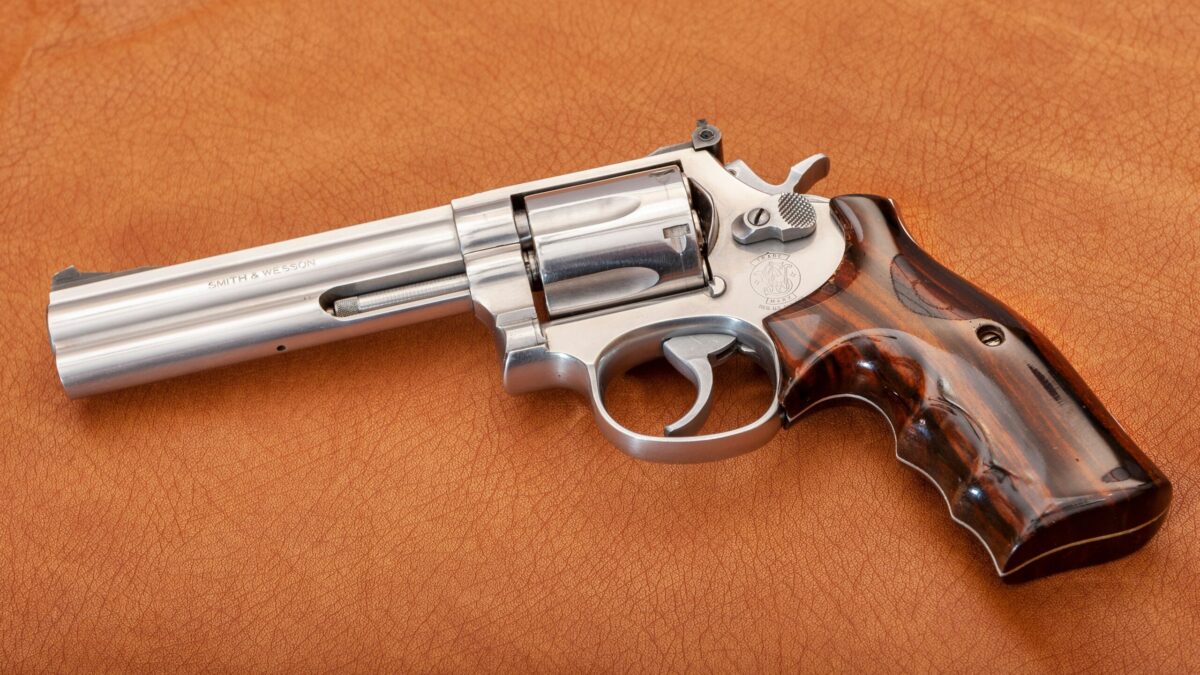 I often carry a Smith & Wesson Model 67 .38 Special; it’s a stainless K-Frame with a 4” tapered barrel. Most people wouldn’t choose it as a concealed carry gun. I wouldn’t have either when I was younger, but it makes more sense today. S&W made mine in 1974, along with thousands just like it. Now, mine is special. It has a perfect action and gorgeous custom stocks- Worley Grips.

Editor’s Note:  Please welcome RevolverGuy Kevin McPherson to our pages. Kevin is a longtime reader here and when he approached me about this story, I jumped at the chance to give him the stage! I know you’ll enjoy Kevin’s tale and will be amazed at the artistry and talent that defines a set of Dwayne Worley Grips. Kevin’s friend Mark Mitchell is the genius behind the camera that captured the beauty of Worley’s work. His photography is wonderful, and it’s the perfect complement to Kevin’s heartfelt tribute. Thank you gentlemen! We’re honored to have you share your work, and Dwayne Worley, with us! –Mike

My law enforcement career started in small town Eastern New Mexico, circa 1987. I knew nothing about the job, but I knew enough to be impressed by cops who took pride in their appearance. The sharpest guys I knew had custom duty rigs and handmade wooden grips on their revolvers. Local craftsman Dwayne Worley was the guy making those grips. Officers wore them like badges of honor and I studied them to the point that I could recognize his distinct stocks. One day a tall slim man dressed impeccably in a sport coat and tie, slacks and western boots came by the PD. He spoke with my chief about an upcoming PPC match. It was a hot day and soon the man took off his jacket.  He was wearing a 6” 686 revolver with deeply grained finger grooved custom grips- Worley grips! I asked my FTO “Who’s the guy with Worley grips?” He looked at me like I was touched and said “That IS Worley, moron; he’s an investigator for the D.A.’s office”.

The more I learned about Worley the more he impressed me. He dressed like a cowboy James Bond and he knew enough about PPC shooting to run matches. He was a high level martial artist and gave freely of his time instructing local cops. Worley also knew a thing or two about police work; he was a cop several years before I was born. I discovered he was a New Mexico State Police Officer during the 1960’s. In the short time I’d been commissioned, I had already become enamored with the NMSP. I was pretty sure the state cops I knew could walk on water. At that point, I’d have bet money that Worley could.

I attended Worley’s martial arts classes and he taught me how to wield a side handle baton.  He treated me well even though I wasn’t old enough to buy my own pistol ammo. One day I asked what he’d charge to make grips for my 686. He pondered a minute then quoted a very reasonable figure considering the labor involved. It might as well have been a million dollars for what I was earning at the time. Acquiring a pair became a dream for me.

Shortly after graduating from the basic law enforcement academy, Worley summoned me to the D.A.’s office. I backtracked mentally on the short drive to the courthouse fretting what infraction I might have committed.  Worley offered me a seat and announced that his wife Linda had taken a job as the Deputy District Court Administrator in Roswell- he’d hired on with the D.A.’s office there, too. He handed me a small paper towel wrapped bundle that I opened to reveal the grips off of his 686. He said “I’ve been meaning to make myself a new pair and our hands are about the same size, so… here you go.” My throat got tight and I had one of those moments where words were not found.

Worley told me there might be hope for me yet and shooed me to go catch bad guys. I couldn’t wait to show off my Worley grips- I drove straight to the station and swapped my Pachmayr’s for the dark wooden stocks. He was right; they felt like they had been custom made for my hand. I couldn’t have been prouder.

Time passed and I was accepted by the New Mexico State Police. I survived that academy and reported to a two-man duty station in Capitan, NM (Population 762). Roswell was only an hour’s drive, so I got to spend time with Worley occasionally. I started carrying a Colt 1911 as my duty sidearm and had a custom Combat Commander built for off duty carry. One visit, Worley told me to leave the Commander with him. I hesitated to leave my new favorite pistol, but I wasn’t inclined to argue with my old sensei. A couple of weeks passed and Worley called to tell me he was tired of storing my 1911.

When I walked into Worley’s shop, he told me that graduating from the NMSP academy warranted a gift. He had made grips from black micarta, stippled them and inletted NMSP shoulder patch pins into the flats between the grip screws. The magazine sported a matching base pad and the mag release was now a gracefully extended paddle. The gun looked stunning. I stammered something about it being too pretty to carry and Worley stated sternly, “No, this is how it should look; you carry the heck out of it.” I couldn’t argue with that wisdom.

I resumed PPC shooting in 1992; Worley was kind enough to loan me the PPC open revolver that he and Portales gunsmith Clifford Hugg had collaborated on to create. Hugg supplied the mechanical genius to assemble the heavy barreled Model 10, complete with a modern triple lock on the yoke. Worley provided magnificent grips and tuned the double action to a point that single action fire wasn’t necessary. In a moment of carelessness, I struck the butt on concrete rushing to the prone position and broke off the front bottom edge of both panels. I hated to face him after damaging that gun. Worley repaired them with his typical ingenuity and actually made them more appealing to the eye.

As the years passed and I grew up a little, I took a major shine to big bore N-Frame Smiths. Worley approved; he’d carried a 4” Model 29 for most of his time with the NMSP. He had many stories of a rougher time in Northern New Mexico when that big 44 helped him make it home.  That Model 29 was actually what started Worley on the path to being a stock maker. The factory grips weren’t conducive to recoil management with heavy loads. Patrolling Route 66 one day, Worley spied a downed mesquite tree and salvaged the root pod. Transporting the stump in the trunk of his police car, Worley took it to a friend with a table saw who split it for him. He fashioned his first pair of stocks with that mesquite. They must’ve turned out ok; Worley was soon fielding requests from area cops wanting his grips. He kept a notebook recording every pair he ever made and who they were for. It numbered over 440 the last time I saw it.

My own Model 29 and 625 Mountain Gun travelled to Roswell for Worley Grips. Dwayne had retired from law enforcement and had started making high end turkey calls. He swiftly drew a fan base and his calls were in high demand. Graciously, he still took time to build grips for his “wayward son”.  The actions on my N-Frames didn’t meet his approval and he took it upon himself to clean them up. Worley knew exactly where to touch stone to steel in the guts of an S&W action to make it right

I woke up one morning and realized that my career had flown by. 23 ½ years had come and gone and I was retiring. I went to visit Worley and show off my latest S&W acquisitions. Dwayne told me I better leave the 67 with him for a bit. Yes sir, Sensei. Soon I got the call that my .38 was taking up needed space in his shop. He had created stocks that were a rich, grainy caramel color with splashes of blond; carefully selected mesquite. In my opinion, they have no equal- aesthetically or ergonomically. I shudder to think how long he toiled to make them so smooth. The fact that they were made from mesquite like his first pair occurred to me about the same time I got a piece of sawdust in my eye. Dry firing the gun confirmed that Worley had applied his voodoo on the inside as well.

We journeyed to the range and I qualified Dwayne for LEOSA carry. He still shoots a 1911 proficiently; even after seeing 80 summers. His posture changes somewhat when he shoots a revolver, though. He shows the sureness of a skill long mastered. An artist practicing his art.  I fired the 67 and marveled at how well it shot. The action was so good that it was… Inspirational. If you’ve fired a revolver worked by a master like Dwayne Worley, you know what I’m talking about. It was almost as if he had infused the gun with confidence. Craftsmen who can do that are getting scarce. S&W no longer uses the term, but Worley made mine into a Combat Masterpiece. It deserves the name now more than the number.

Driving home, I pulled over for a moment and reflected on the starry night sky over the desolate New Mexico plain. It hit me how fortunate I’d been to have a few good men like Dwayne Worley looking after me my whole career.  I drew the old Masterpiece and felt the same overwhelming pride I had so many years ago when he gave me the grips off of his own gun.

Editor’s Note: Unfortunately, Mr. Worley isn’t taking new orders at the current time. I know that will disappoint you as much as it disappointed me! We’ll be sure to let you know in these pages if the situation changes. For now, we’ll just be thankful that men of such caliber and talent walk among us. I’m happy and grateful to know that men like Worley are out there.  –Mike

All images from Mark W. Mitchell.