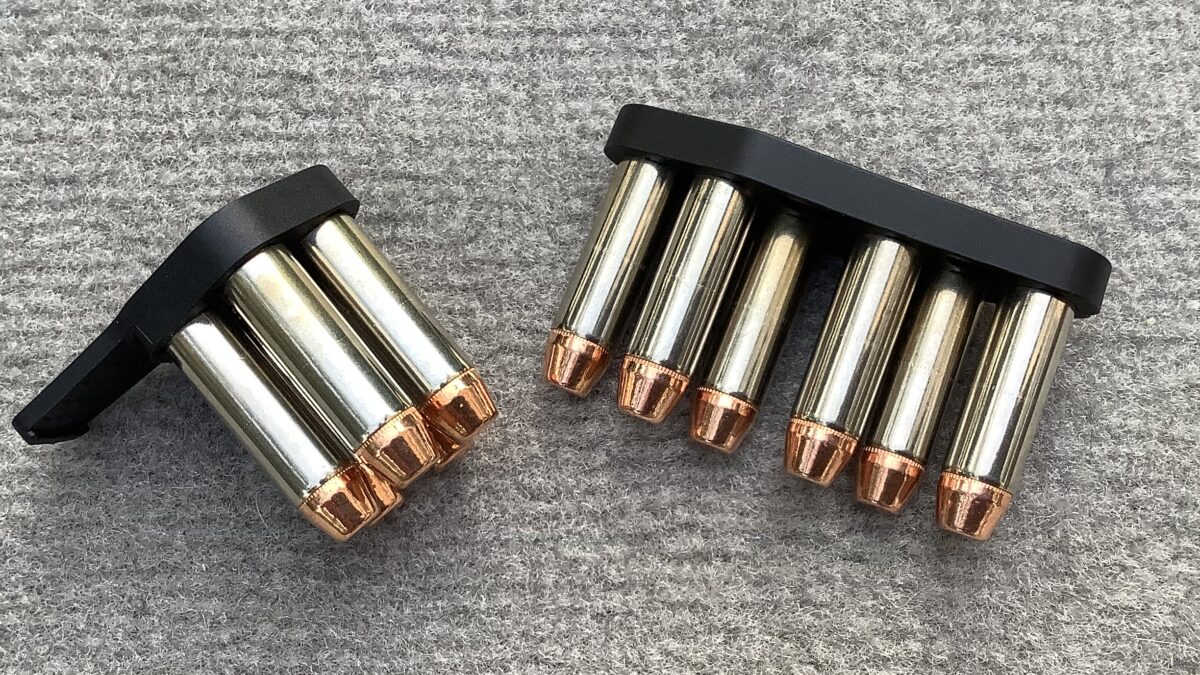 There’s a lot of tinkering going on in the shop at Zeta6 these days.

The innovative company, which brought us a host of interesting variations on the strip loader concept, has been hard at work expanding their product line, and we’re happy to share the latest developments here with you at RevolverGuy.

The first of the new products from Zeta6 is a version of their very interesting J-CLIP design, sized for the popular Ruger LCR revolvers chambered for .38 Special and .357 Magnum. 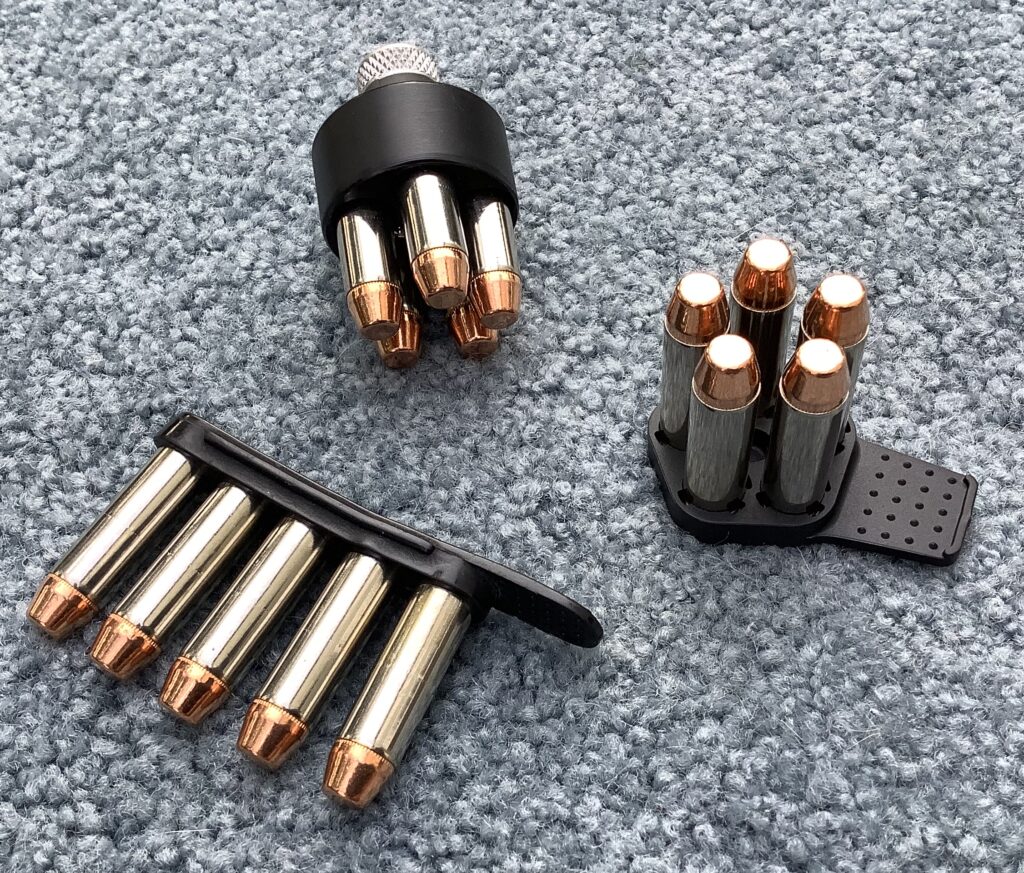 Justin tested the J-CLIP in these pages before, but for those of you who missed that review, the J-CLIP is an interesting hybrid between a round-body speedloader (like the ubiquitous HKS or Safariland Comp) and an inline strip loader (like the trendsetting Bianchi Speed Strip, or the later versions from Tuff Products, DeSantis, and Galco). In the J-CLIP, the rounds are held in the same pattern as the chambers of the cylinder, just like you’d see in a round-body speedloader. However, instead of relying upon a knob or button to release the payload, the flexible J-CLIP is simply peeled away from the cartridges, using the same motion you would use with a strip loader. 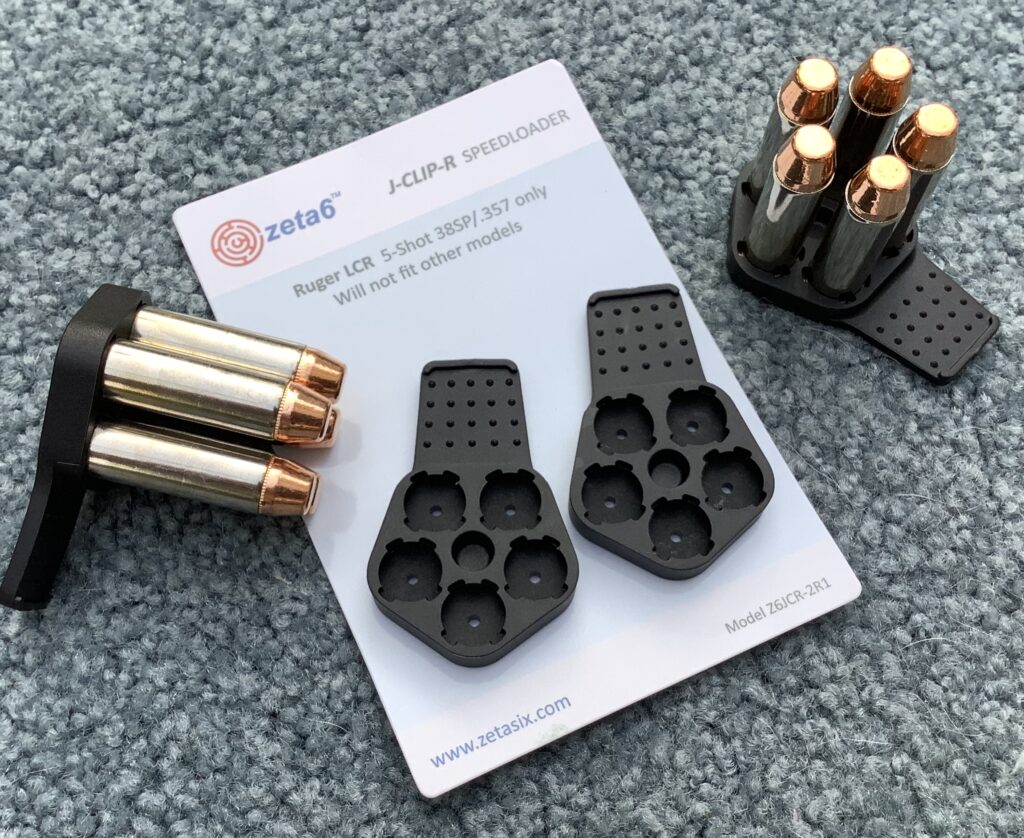 When Justin tested the J-CLIP previously, he was pleased to discover that it was almost two seconds faster than using an inline strip loader, and seemed to be less noticeable in the pocket than a round-body speedloader. After playing with the newly-released J-CLIP-R for the Ruger LCR, I’ll second those observations, and will also add that the J-CLIP-R neatly solves one of the problems with carrying a round-body speedloader loose in the pocket, in that you don’t have to worry about pocket lint or other debris jamming the release mechanism.  The “solid state” design of the J-CLIP and J-CLIP-R is as simple as it gets, and with no moving parts, it’s like the AK of round-body loaders—it’s simple, robust, and gets the job done. 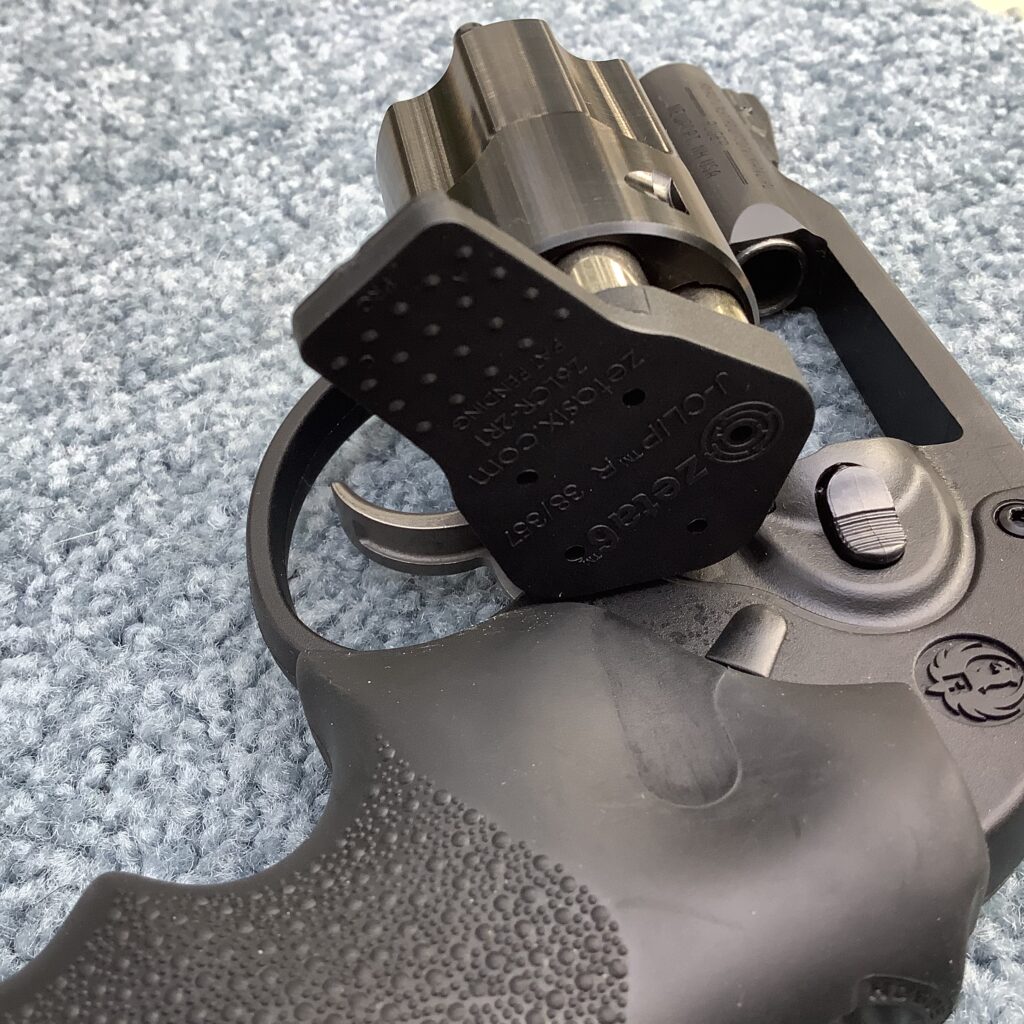 I was pleased to see that the J-CLIP-R cleared the profile of the excellent Hogue Tamer grips that are standard on the LCR. The Hogue grips are an essential part of the LCR’s magic, and I can’t imagine using anything else. However, they’re not particularly amenable to modification—you can’t really sand them down like a pair of wood stocks that are too proud—so if your loader doesn’t clear them, you’re kind of out of luck. Fortunately, the pentagram-shaped base of the J-CLIP-R neatly clears the side of the Hogues and lets you get the loader mated up without difficulty—something that’s not always accomplished so easily with the round-body speedloaders.  Score one for the J-CLIP-R! 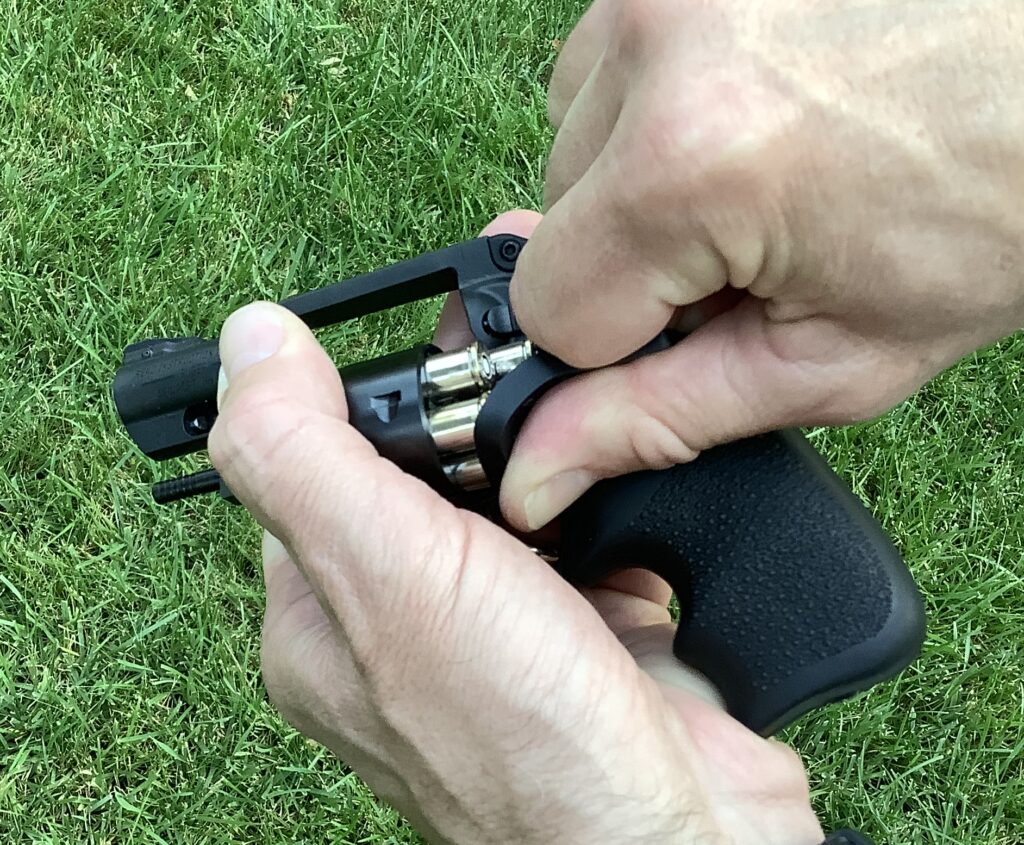 Alas, I did notice the same tendency that Justin noted, to pull a round out of the chamber when peeling the loader away from the cylinder. Honestly, I’ve done the same with a multitude of round-body speedloaders and inline strips, but it is something to pay attention to as you start working with the J-CLIP-R.

To get another opinion, I gave a set of J-CLIP-R loaders to a faithful RevolverGuy reader who carries a .357 Magnum-chambered Ruger LCR. She took them to Tatiana Whitlock’s Handgun Accuracy class and gave them a good workout. Upon her return, she told me the J-CLIP-R was now her favorite loader for the gun! She praised its compact size and ease of use, and said she was much faster with the J-CLIP-R than with her inline strip loaders or 5-Star, round-body loaders. I think Zeta6 is onto something here, with this design, and you should definitely check it out if you carry an LCR.

The new K-PAK from Zeta6 is like the J-CLIP-R in that it blends the features of several loader types into one. 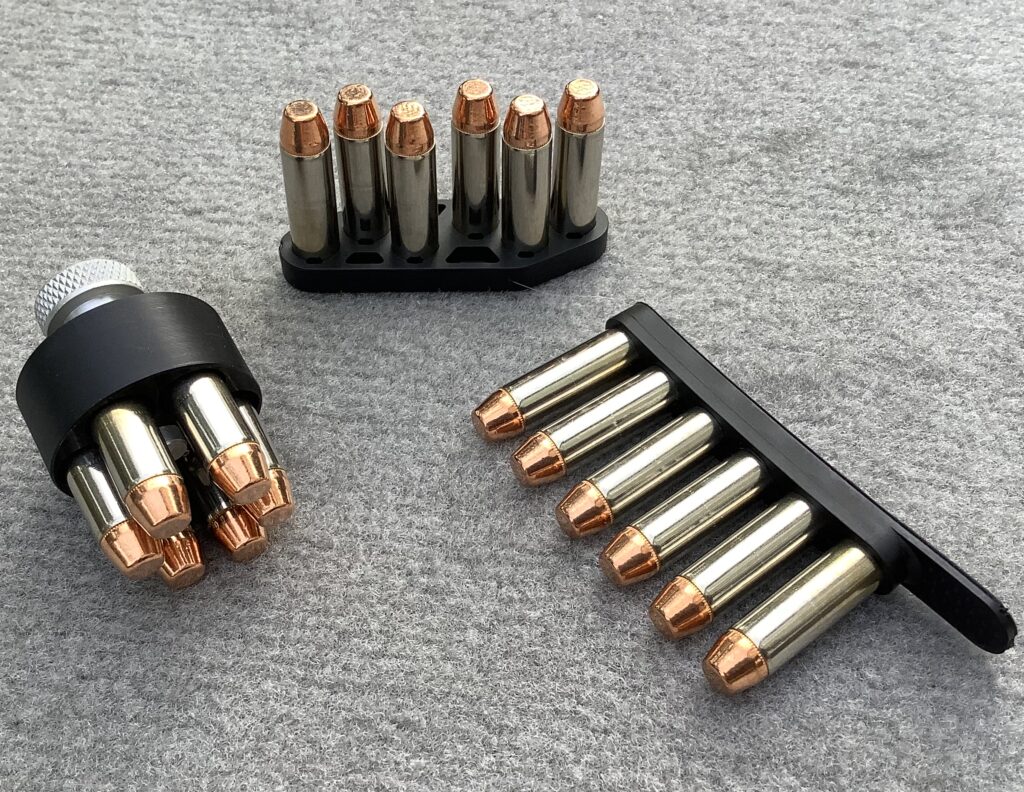 Like the strip loaders and J-CLIP that came before it, the K-PAK is a flexible loader that’s peeled away from the cylinder to release the payload.  However, the arrangement of the cartridges in the K-PAK is unique—they’re not held inline, nor in a circular pattern, but instead are held in a pair of arcs, as if someone glued a pair of half-moon clips side-by-side on a piece of flexible polymer. 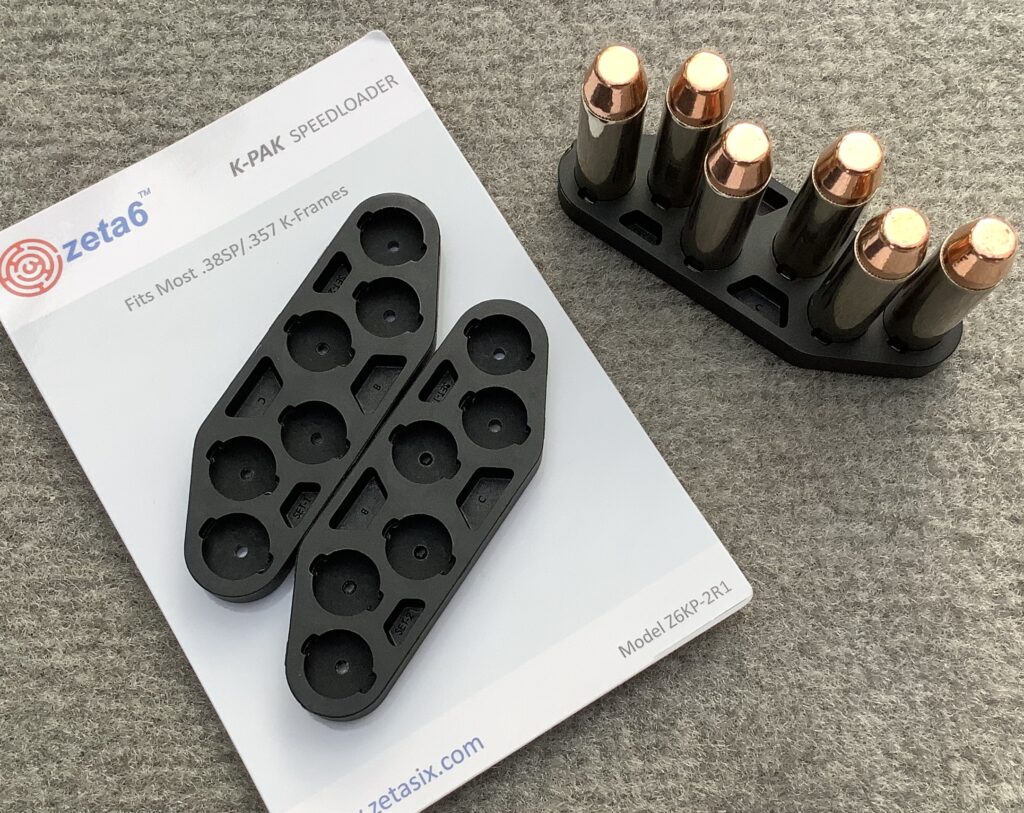 The trapezoid-shaped K-PAK is optimized to clear grip panels without interference. There’s not a lot of extra material around the border, and the angular ends allow you to feed the loader into the cylinder without much drama from fat target stocks.  The trim edges of the loader also help to make it less bulky for carry.

However, that narrow rim doesn’t give you much to grip, and there’s no dedicated tab on either end to gain a purchase. As a result, you’ll need to grab the half of the loader that’s not inserted into the cylinder to peel it away. It’s a slightly different feel than you’re used to with a tabbed, inline strip loader.

In working with the K-PAK, I discovered that you need to use it differently than other strip loaders.  It’s a unique tool, and it requires its own “manual of arms,” so to speak.

The most significant difference is that you’ll need to release your grip on the loader and flip it upside down halfway through loading.* This is necessary because the arrangement of the cartridges in the K-PAK won’t match the chambers in the cylinder unless you invert the loader after filling the first half of the cylinder.

If you’re loading with an inline strip loader of traditional design, you don’t  normally have to flip the loader. Imagine you’re holding one of these with your thumb (or fingertip, if you prefer the “scalpel” method) over the end with no tab. You load two rounds in, peel away, then rotate the cylinder. You slide your thumb (or finger) down the spine, and repeat the process, peeling in the same direction. When you get to the last rounds in the strip, the little tab at the end will give you enough purchase to continue peeling in the same direction–no flipping required. 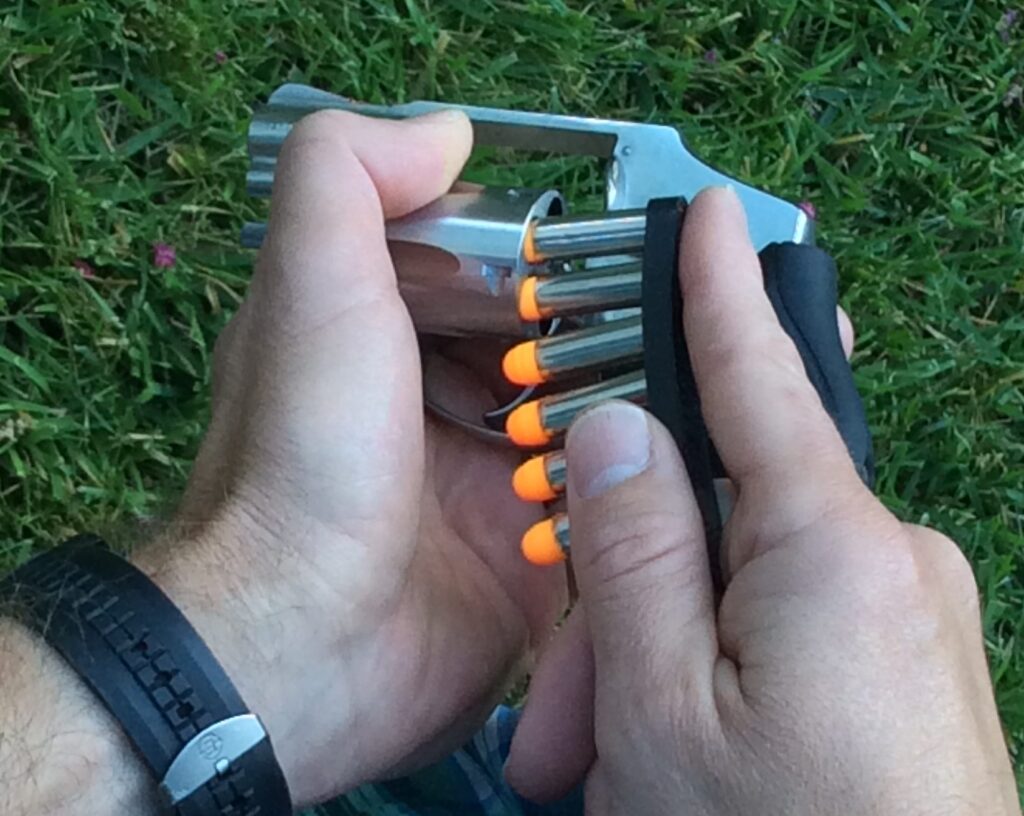 You can’t do that with the K-PAK, however. Because the cartridges are aligned in two opposing arcs, you’ll need to flip it upside down between insertions, to make the cartridges line up with the outside chambers.

To explain, the K-PAK will be inserted into the outside half of the cylinder on the first go, and peeled away to load the first three cartridges. Once this is done, you’ll rotate the cylinder half a turn to place the empty chambers on the outside, again. At this point, if you try to mate the K-PAK to the cylinder without flipping it upside down first, you’ll find that the arc of the remaining cartridges in the loader is opposite the arc of the empty chambers–you can’t get there from here!

A quick inversion of the loader will fix the problem, though. Flip it upside down in your hand, and the cartridge arc will now mate with the empty chambers, and you can proceed with loading the second half of the payload.

This can take some getting used to, and there’s a potential you might fumble the loader as you flip it over during a moment of stress, so it will definitely require a lot of repetitions to hardwire it into your brain and make it stress resistant.

I have to admit I struggled with the K-PAK loader in my trials. I’ve been building habits for many decades that are incompatible with the way that the K-PAK is used, and I found myself getting frustrated very quickly. I’m habituated to transferring the gun to my left hand and loading with my right, and I’m not used to having to flip the loader in the middle of using it. The K-PAK required a whole new set of skills, and if I slowed things down, I could successfully load with the K-PAK in my non-dominant left hand, but it felt awkward to me after a lifetime of using my right hand to load.

Ugh. I guess if I was starting from scratch, I could learn the new pattern, but trying to force it against ingrained habits was awkward and slow. I could tell the Version 2.0 K-PAK was not a good fit for my Version 1.0 brain! I would have been much better off using Zeta6’s more traditional J-STRIP or SYM-STRIP products, which offer subtle enhancements on the inline strip loader concept. Those tools are a better match for my existing habits.

I don’t mean to sour anybody on the K-PAK concept.  It’s a viable tool, and offers some unique advantages over round-body and inline strip loaders, but you can’t use it like those other products—it has its own manual of arms that you have to perfect. This old dog wasn’t up to the challenge of learning new tricks, but I’m sure some of you young pups could get the hang of it quickly, and benefit from the advantages offered by the K-PAK.  If you’re already a left-hand loader, then you’ll probably warm to the K-PAK quickly. Give it a try and let us know what you think.

I’ve got to hand it to Michael Lyle and the team at Zeta6.  They’re certainly not afraid to experiment and suggest new alternatives to accomplish the age-old task of reloading a revolver.  They’re one of the few companies out there trying to be innovative with revolver loader technology, and they’ve managed to create some products that are definitely worth a look. Plus, they’re really nice guys. Good people, there.

Stop by the Zeta6 website with an open mind and have a look around. You might just find your next revolver loader there!