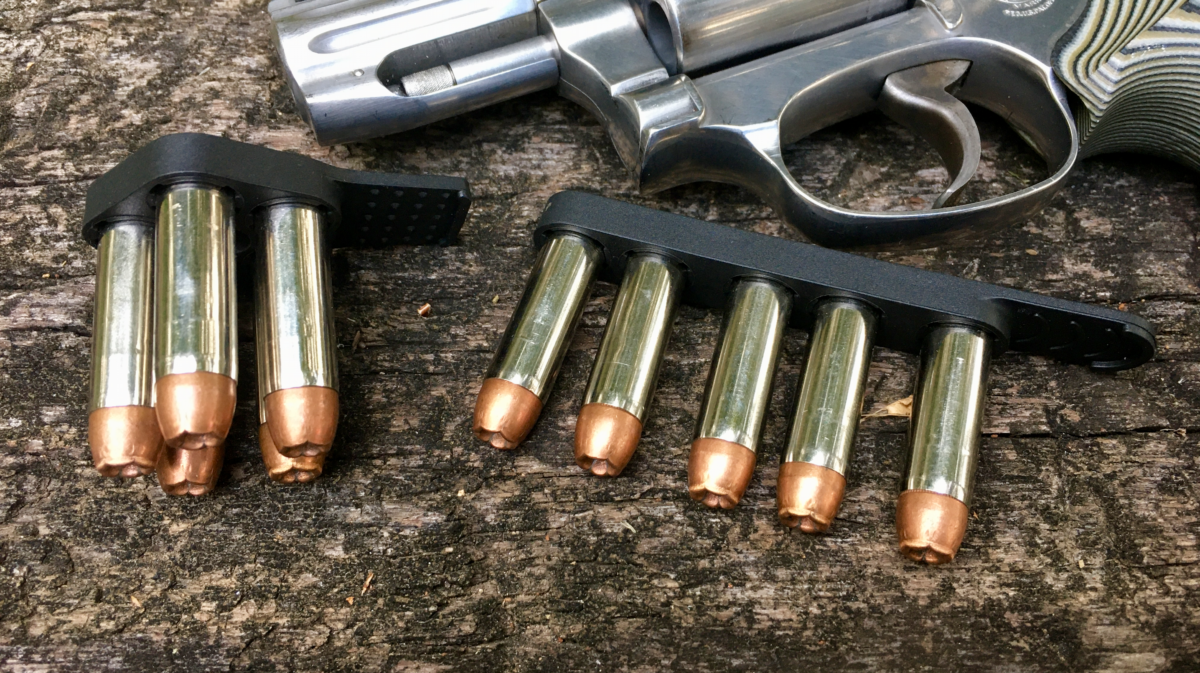 Sometimes you know what you’re gonna say before you even begin an article. Other times you think you know what you’re going to say and get surprised. The latter is the case with this article – I had some preconceptions going in, but a little experience turned me completely around. Today we are going to look at two new reloading devices: the J-Strip and the J-Clip from a new company, Zeta-6.

Full Disclosure: Zeta-6 sent us five sets of the J-Clip and five sets of the J-Strip. I also spent close to an hour on the phone with the owner of Zeta-6 to better understand their product. We have received no incentive, financial or otherwise for this review. However, this article contains affiliate links.

The reloading strip seems to be undergoing something of a renaissance right now. In the last month or two we’ve gotten several new strips to review. Zeta-6 is responsible for two of these, and this is where my prejudice came in before starting this article. Zeta-6 makes a strip that looks and feels traditional, and an unconventional looking “J-Clip” which on it’s surface seems like a speedloader replacement. Before beginning I assumed I’d say something like, “the strip is fine, the J-Clip…meh.” Turns out that wasn’t quite the case. Let’s take a look at these two loading devices, starting with the J-Clip. 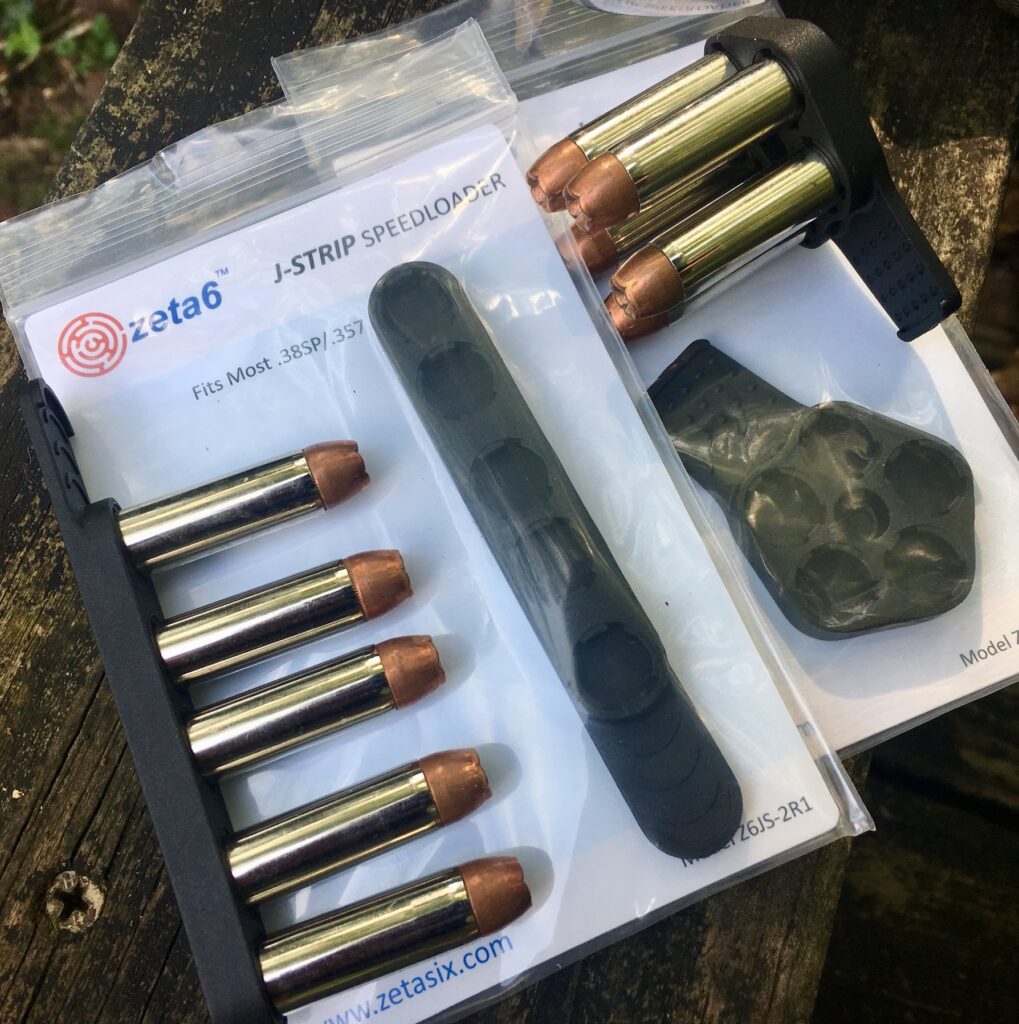 The J-Clip shares some similarities with the reloading strips from Bianchi that we’re all familiar with. Rounds are carried and released in the same manner as Quick Strips, Speed Strips, and others. It also shares a passing resemblance to a speedloader – the rounds are carried in a circular formation for all-at-once loading. Though comparisons to both strips and speedloaders are inevitable, this really is neither, nor is it a replacement for either. It would serve us well to imagine this as something in its own class and try not to stick too closely to the idea of it as a replacement for one or the other. 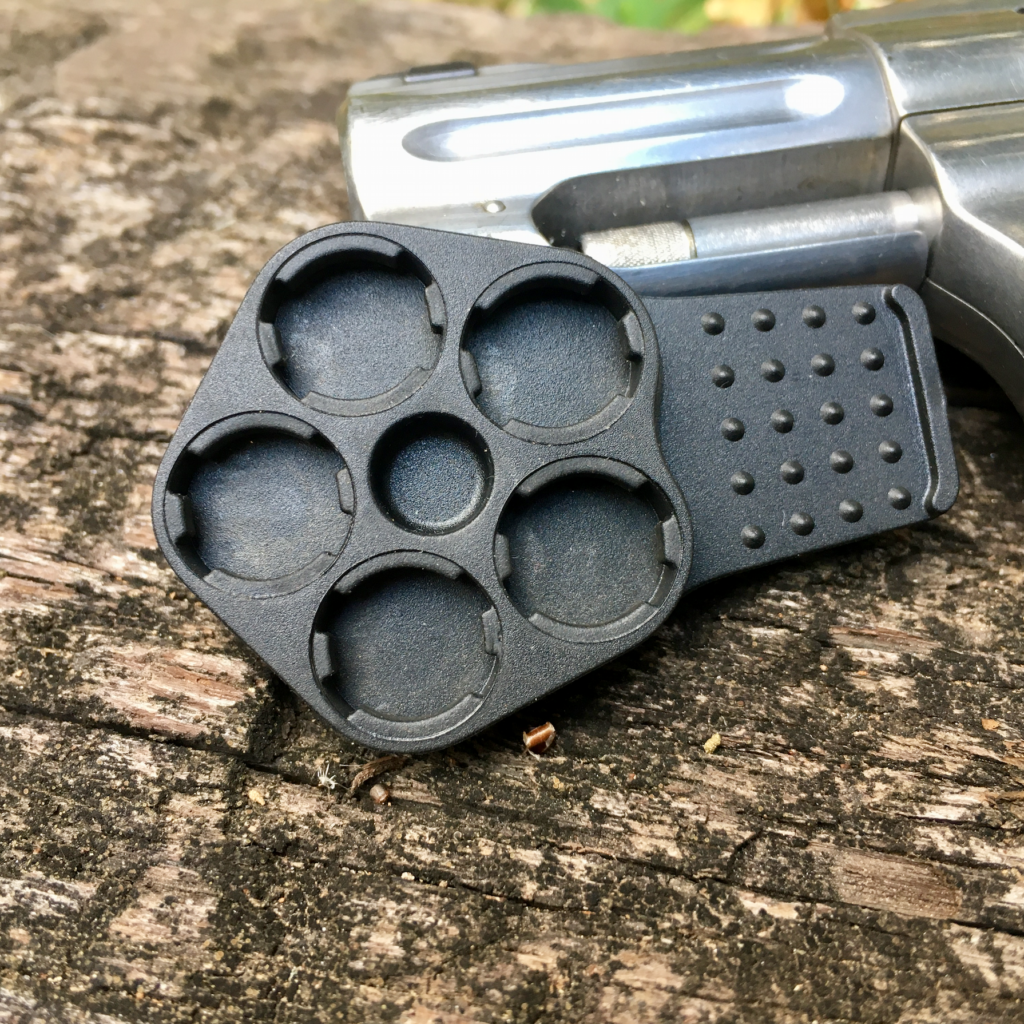 The J-Clip is currently only available for S&W J-Frames. The placement of each round is designed to correspond perfectly with the J-Frame’s chambers, and those of like dimensions. Using this clip requires aligning the rounds with the chambers, seating them, and  “peeling” the J-Clip back to release them. 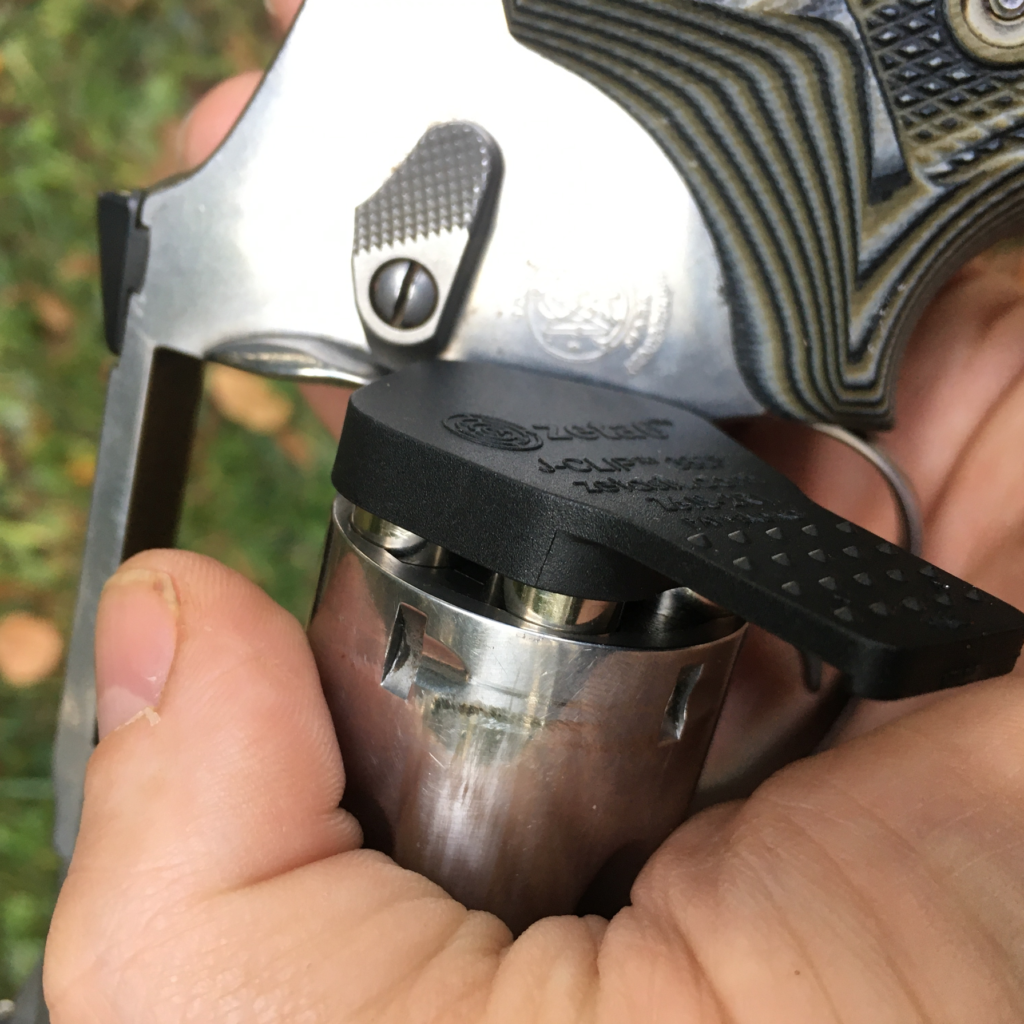 I wasn’t prepared for much when I began working with this loader. I didn’t expect it to be much faster than a traditional reloading strip, but it was. As I mentioned recently, I am in the midst of a big reloading strip test and comparison, so I have a good deal of fresh data. The mean time to reload five rounds, in a J-Frame, with traditional loading strips is around 9.5 seconds. This is based on 24 timed iterations with two different brands of strips. 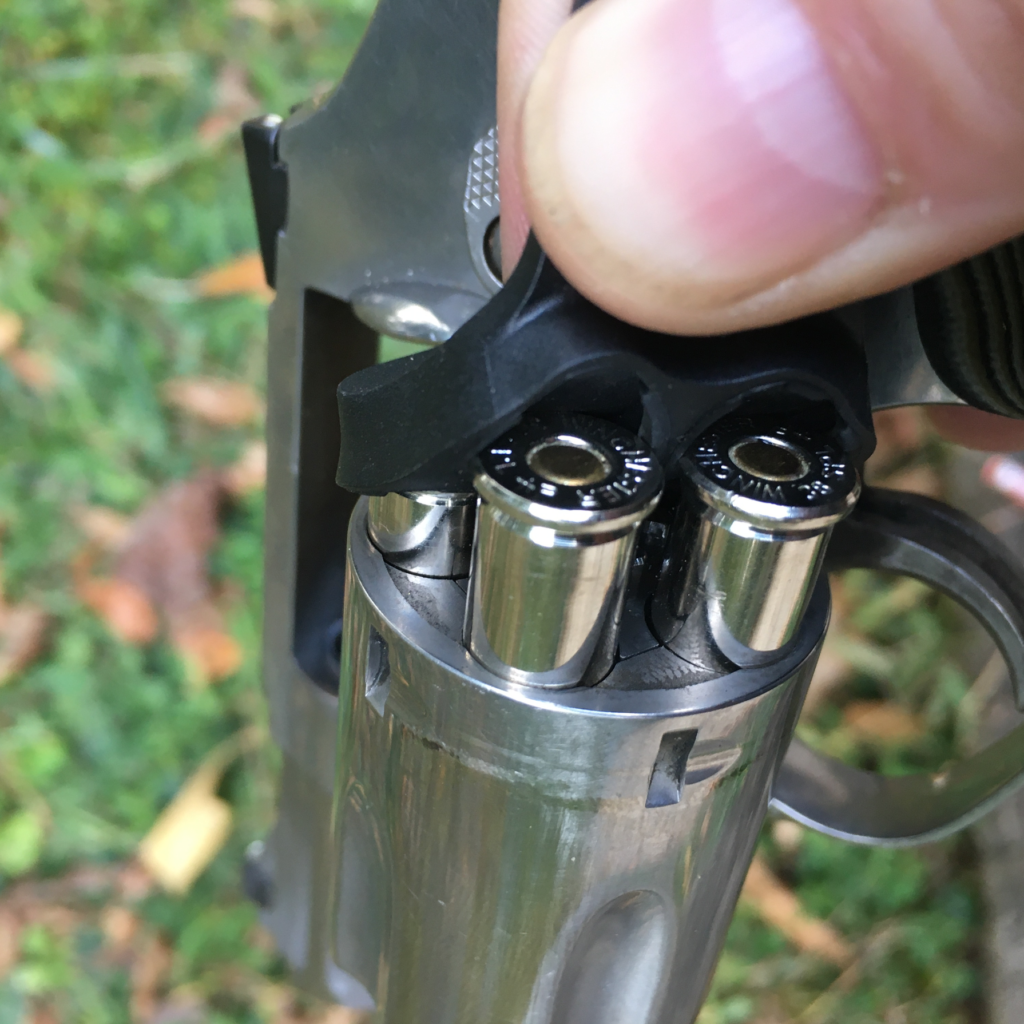 With the Zeta-6 J-Clip this time drops to 7.84 seconds. Hugely faster? No. Faster? Yes, by about 1.8 seconds, which could mean a huge difference. But there’s a rub… During four of the twelve iterations I ran with the J-Clip, I lost a round. When pulling the loader away from the gun’s cylinder, one round would get yanked out and go flying.

Also, to be clear, that’s not as fast as a speedloader. I ran a few iterations with the Safariland Comp I for comparison, and I attempted to treat the two loaders as equally as possible. I didn’t have a belt pouch that would fit the Zeta-6 J-Clip, so I ran both it and the Comp I from my right hip pocket. Average times with the Comp I were 5.31 seconds, versus the 7.84 of the J-Clip.

Again, I don’t look at this as replacement for either the strip or the speedloader; I look at it as filling a gap between the two. What we end up with is a tool that is a bit more carry-friendly than a speedloader but slower, and a one that is quite a bit faster than a reloading strip, but more challenging to carry.

One thing this blog has taught me is that just because I can’t imagine a use for something doesn’t mean someone else can’t. I could come up with a couple of reasons you might want to consider these. First, they’re cheap. At $10 for a 2-pack, they’re a little less than half the price of Comp Is. I’m not the person to tell you to buy cheap stuff for your gun, if you legitimately can’t afford a speedloader you can get two J-Clips for about the cost of a Comp I. Or, if you want to stash some ammo around your house, in your car, in backpacks, or all of the above, the the J-Clip would be a fairly economical way to do that.

The other potential usefulness I see in the J-Clip is in pocket carry. Assume you have to go to some outing where your dress precludes carrying a speedloader on the belt. Do you throw it in your pocket?

I also carried the Zeta-6 J-Clip for several hours. You can still see it, but its shape is a bit more ambiguous and its flexibility makes it a heck of a lot more comfortable. The Comp I is a large “lump” in the pocket; the J-Clip is a flexible presence; there, but not terribly uncomfortable. 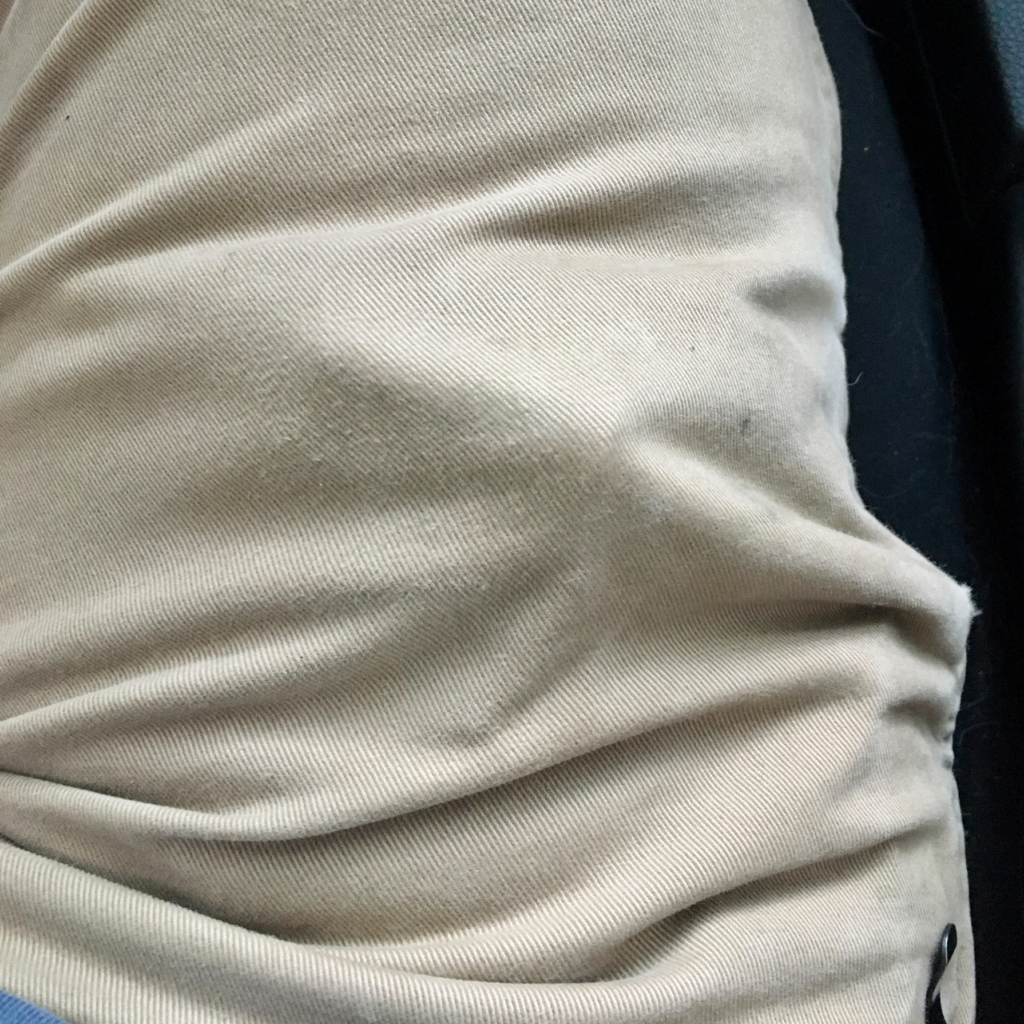 Unfortunately the flexibility of this device that makes it comfortable to carry, also slows it down on reloads. Something that consistently cost me a second or more when running the J-Clip was aligning the rounds. Because of the flexible nature of its construction, rounds aren’t held in tight alignment with the cylinder. 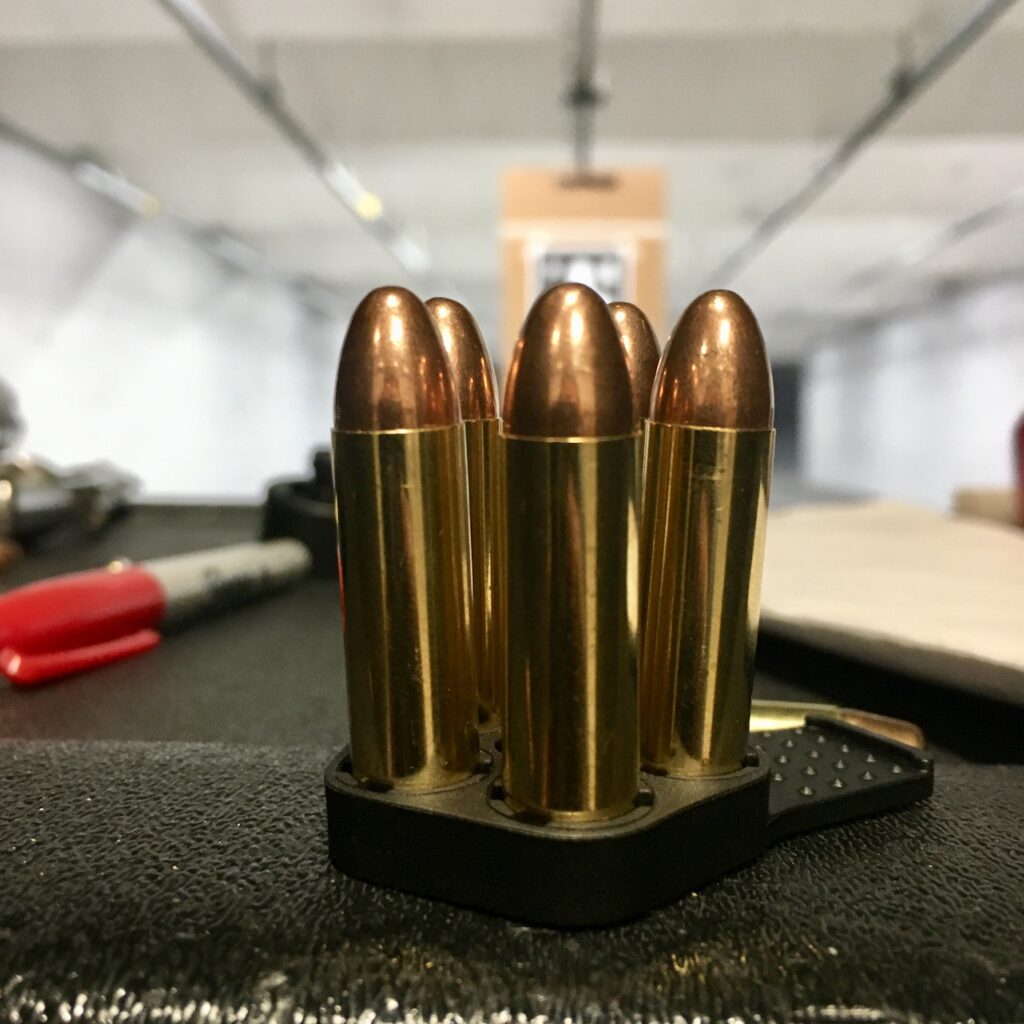 The “J-Strip” is the more conventional reloading strip in Zeta-6’s lineup. On the surface it just looks like a 5-round reloading strip, but there is a subtle difference. It is designed specifically for the J-frame, and each cartridge is perfectly spaced to match the chambers of the J-frame (and other revolvers using the same spacing). This is in contrast to other reloading strips where the difference is something like “universal.” 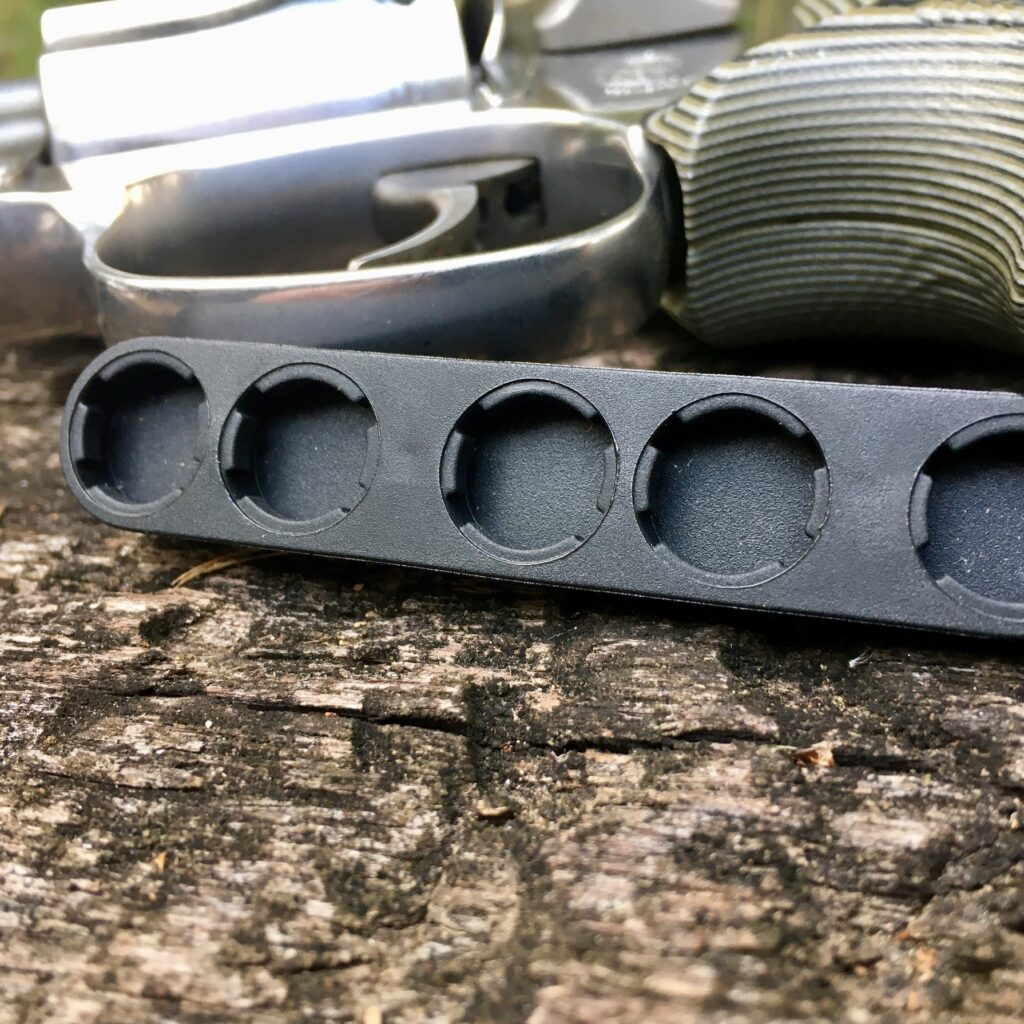 There’s one other minor difference, too. Rounds are placed in sets of 2, 2, and 1, with a larger space between the sets. This lets you load two-at-a-time, twice, then the single. In theory.  One of my favorite sayings is, “in theory, theory and practice are the same. In practice, they’re not.” Let’s look at the J-Strip in practice. 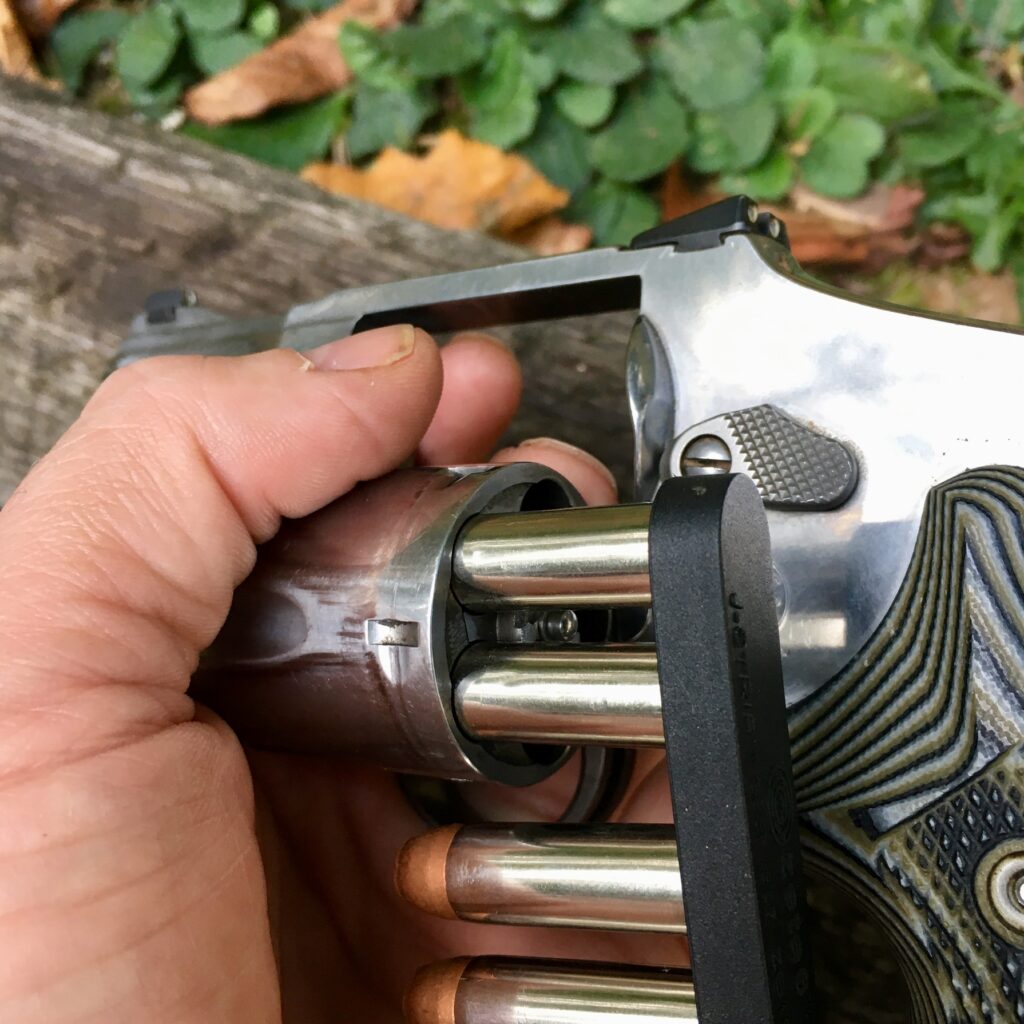 My chief knock against this loader is that it isn’t symmetrical. If I draw it out of my pocket backwards, I’m presented with the single round first. Because the habit of getting two rounds in the cylinder is so deeply ingrained and the additional spacing between “sets” of cartridges on the J-Strip is so subtle, I found myself (repeatedly) attempting to load the single and the first round of the next pair. This created an obvious problem. The rounds didn’t load well in this fashion, and even if they did, I was still left with a single and another pair of rounds.

Michael of Zeta-6 tells me that an improved version of the J-Strip is forthcoming. He was also willing to share some mechanical drawings with me (on the condition that I not print them) and they do appear to be much better.

My second complaint with the J-Clip: it’s slow. After twelve iterations with the Zeta-6 J-Clip I was sitting at 10.62 seconds to load five rounds into a J-Frame. This is over a second and a half slower than any other reloading strip I worked with; in fact I found that I could load a full SIX rounds into my King Cobra from a 2x2x2 Pouch in less time (10.30).

First, I learned a lot with this loader. I almost had my mind made up before I’d seen them. My actual results were the complete opposite of my preconceived notions, though. That’s a good reminder that my opinion doesn’t really mean anything unless I’ve actually gotten out and gained some experience with the product in question.

As to the product themselves: I like the current iteration of the Zeta-6 J-Clip and I’d recommend it if you understand its capabilities and limitations, and employ it accordingly. It doesn’t get close to speedloader speed, and it’s bulkier than a reloading strip. But it sits right in the middle in regards to speed, and is extremely affordable. Unfortunately I can’t really recommend the current version of the J-Strip right now. I will, however, keep my eye on future versions and update you guys if this assessment changes. 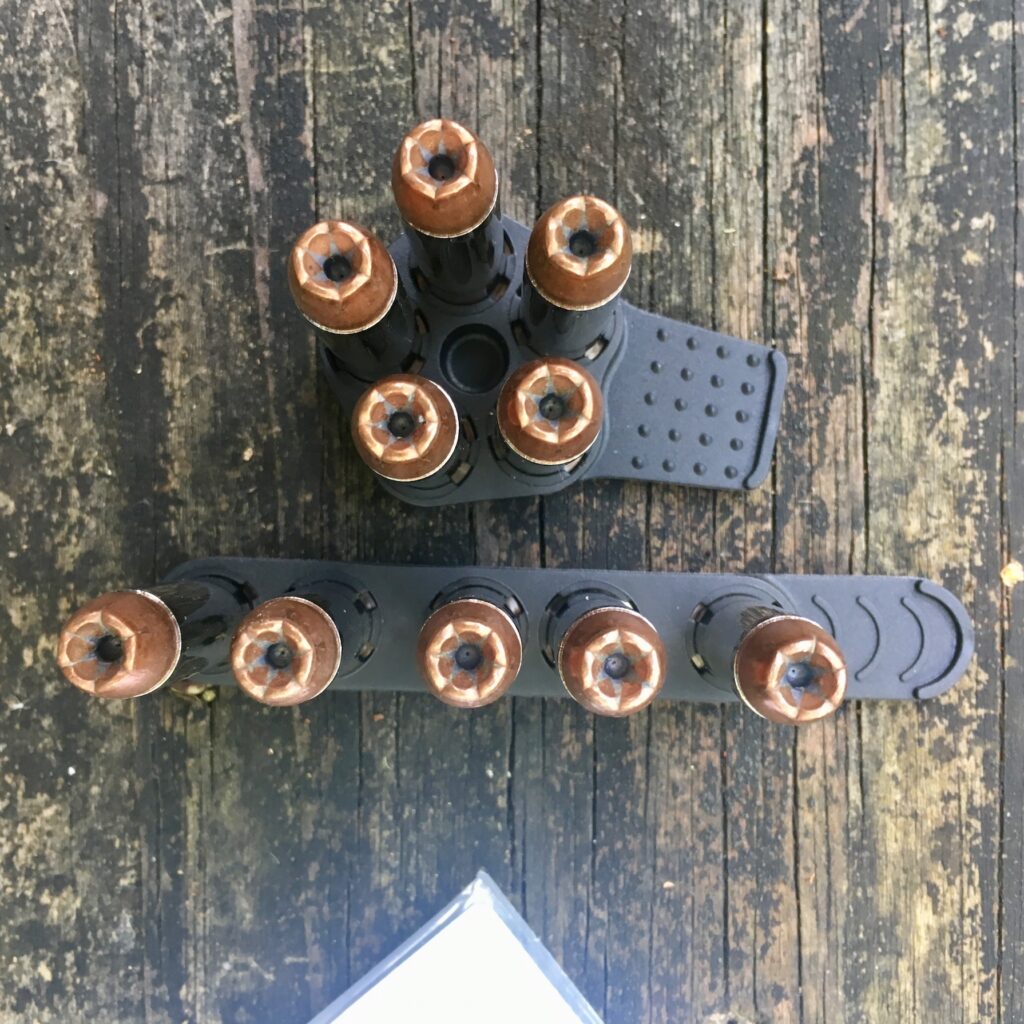 Also, in regards to Zeta-6: they are making some very cool products that demonstrate one thing to me. they are thinking about revolvers! The J-Clip is unlike anything I’ve seen before. They also are currently developing a “K-PAK” loader for K-frame revolvers that loads three at a time, and a six-shot K-Clip. It’s a really neat design, and I’m looking forward to trying it out. I really like seeing a company putting some energy and innovation toward revolver shooters!

First, THANK YOU to for the outpouring of support this week! We asked, and you guys responded. We really appreciate all our new Patrons, those that increased their pledges, and you guys that have been supporting us for a while now. If your name is in that picture below, THANK YOU! To the rest of you, please consider supporting us on Patreon – every little bit helps. 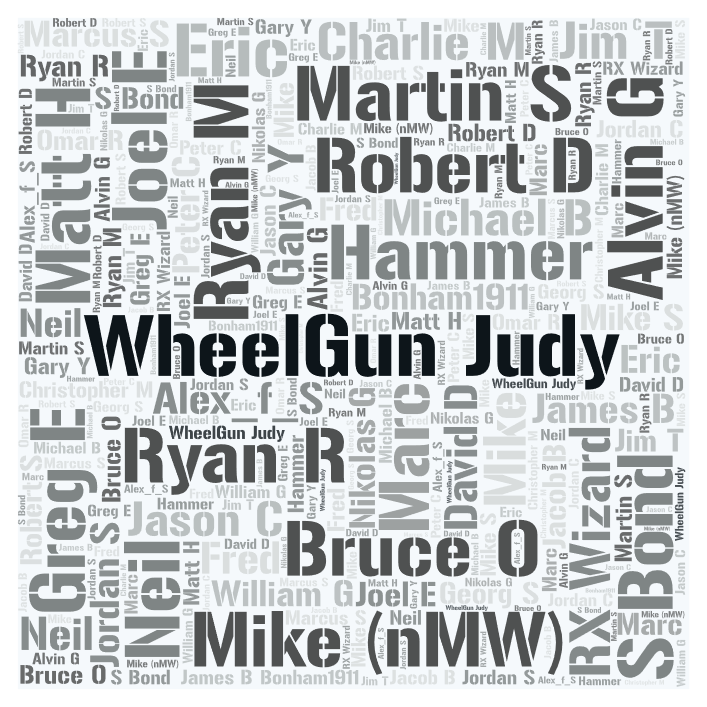