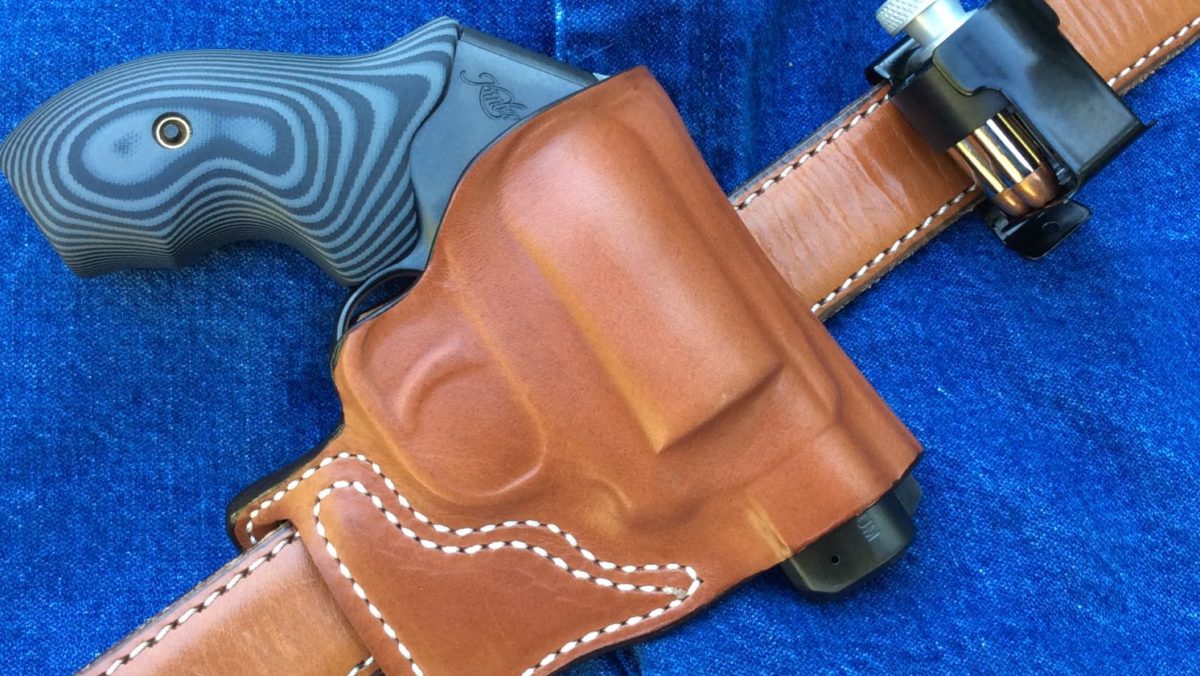 I’ve always treated my snub revolvers as pocket guns, but when the time came to review the Kimber K6s DC, there was something about it that screamed for a belt holster. It was probably the 6th round that got me thinking about it as a legitimate “belt gun,” but the excellent sights and trigger helped seal the deal. Even though it’s a small-frame gun, the K6s shoots like a medium-frame snub, and it deserved a good belt rig.

Our RevolverGuy friends at DeSantis Gunhide fixed that situation by sending their L-Gat Slide for the snubby Kimber. I’ve been wearing the L-Gat/K6s combination for several months now, and I’m happy to report that it’s an excellent match.

The DeSantis L-Gat is a strong side, outside the waistband (OWB), open top holster of the “slide” variety, which means that it’s designed to cradle the middle of the gun, but not cover the entire length of the slide or barrel. It’s a “minimalist” design, where just enough leather is employed to secure and stabilize the weapon, without adding extra material on the top and bottom. 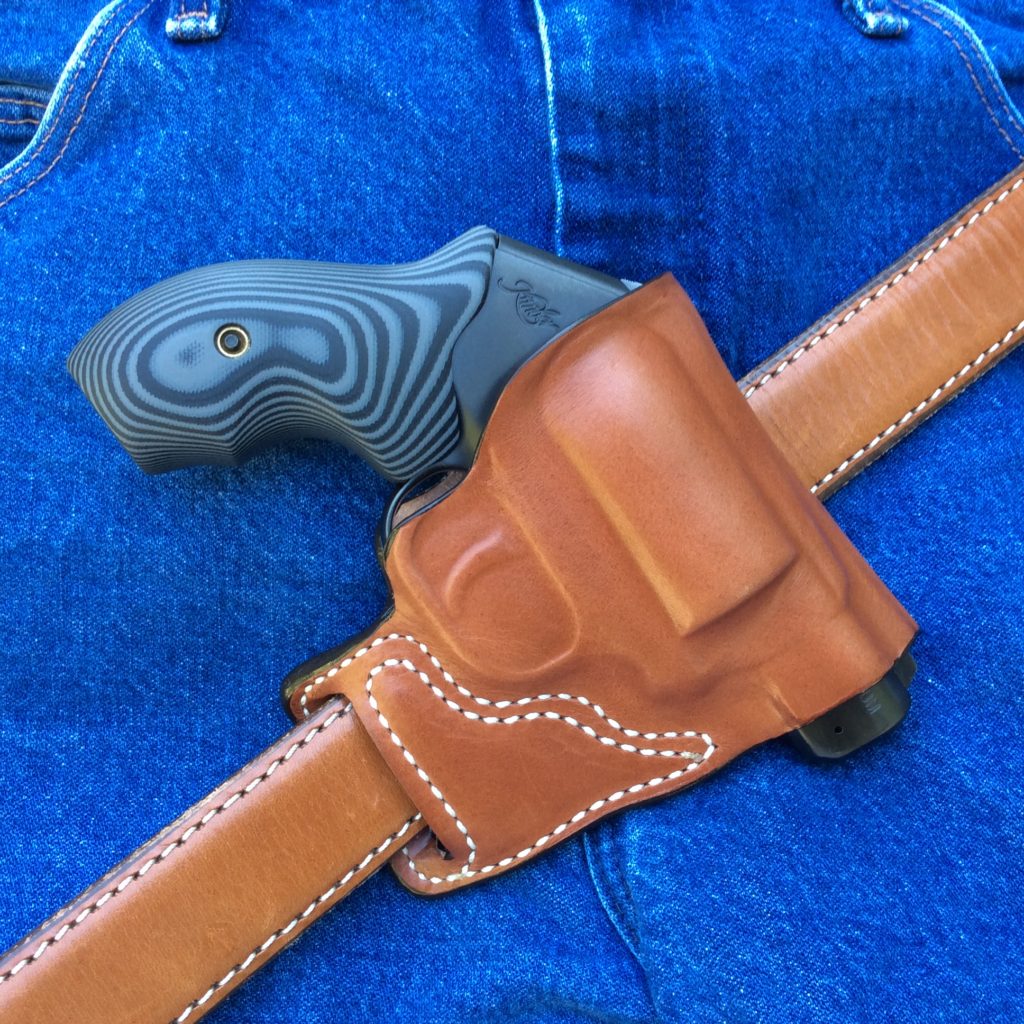 The slide-style holsters are popular because they present a slightly lower profile than a holster with a full length pouch. Additionally, they allow a shooter to carry a “family” of guns that share the same frame, but have different slide or barrel lengths.  For example, my L-Gat Slide carried the K6s DC with just a small bit of the 2” barrel sticking out the bottom, but would also handily accommodate the longer tube on the 3” K6s Stainless that Justin reviewed. That kind of versatility can come in handy if you carry several variants of the same gun.

The L-Gat Slide has its roots in the #1 Professional holster from California lawman and holster maker Bruce Nelson.  Nelson originally designed his #1 as a crossdraw, but the design was easily adapted to make an excellent strong side holster as well. Because Nelson’s career as an undercover narcotics officer placed big demands on his time and his privacy, he couldn’t turn his small garage operation into a high volume, commercial business.  Therefore, he enlisted the help of friend and fellow holster maker Milt Sparks to handle the demand.  Sparks improved the design by reinforcing the mouth of the holster to ensure it stayed open when the gun was drawn, and adding a sewn, full-length sight rail.  He sold it as a strong side holster with the catalog number 55BN, and popularized the design far and wide.

Over time, almost every major holster manufacturer has produced their own variant of this design. Bianchi marketed one as the “Askins Avenger,” and Galco sold one as the “Avenger.”  The L-Gat is DeSantis’ excellent contribution to the breed.

The principal characteristic of this holster style is the belt loop system. The pouch is secured to the belt by a tunnel loop on the back of the holster body, but a slot is cut in the trailing edge of the leather skirt to feed the belt through.  This trailing edge slot allows the belt to pull the butt of the gun inwards, which aids in reducing printing.  Absent the belt slot, the butt of the pistol would angle away from the hips, and sacrifice concealment. 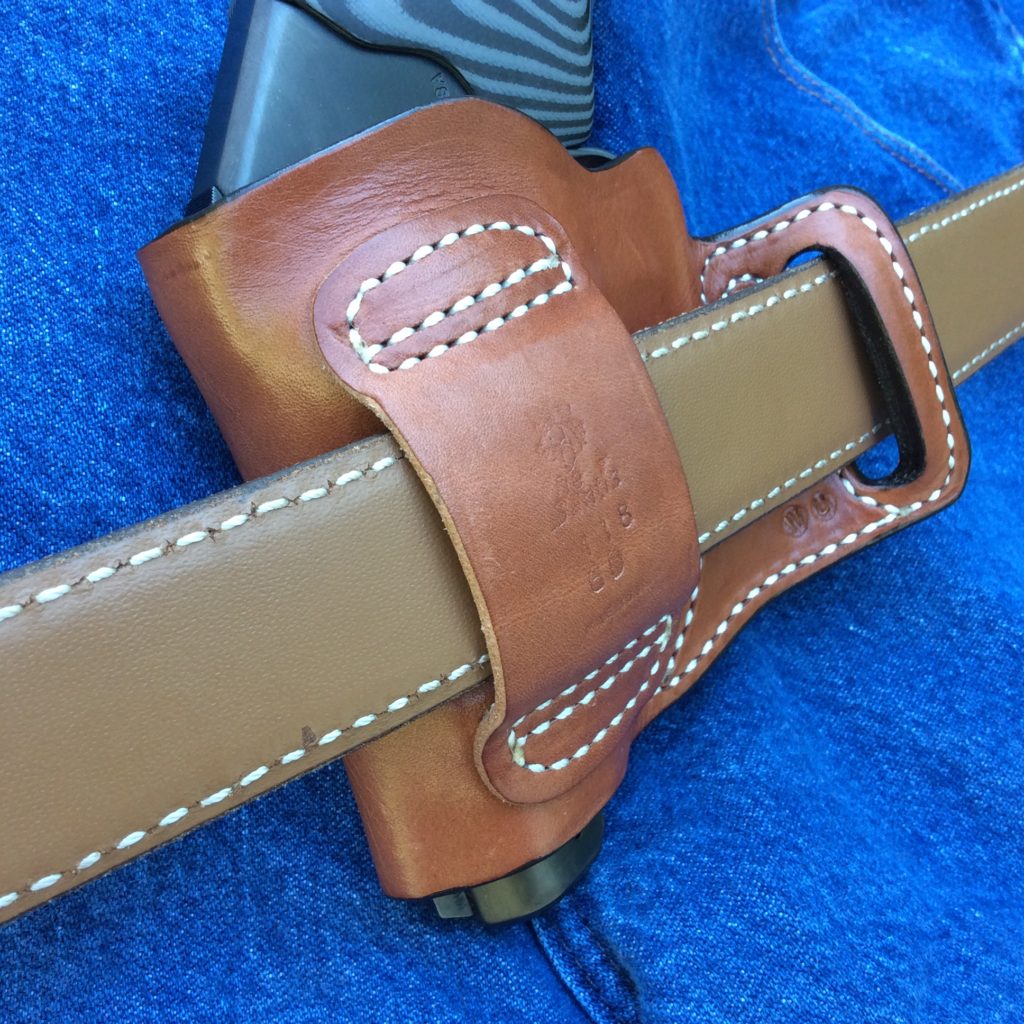 The L-Gat’s pouch is carefully boned to improve fit and retention, which is important because the L-Gat doesn’t have any safety straps to keep the gun in place (DeSantis offers a T-Gat variant which includes a thumb break, if desired). The gun carries with reasonable security however, because the mouth of the pouch is specially formed to keep the gun in place.  The mouth has a bit of an hourglass shape, with a belled top that helps to funnel the gun into the pouch during reholstering, but a pinched “neck” below that which creates an internal shelf that bears on the back of the gun’s cylinder. This shelf softly locks the gun into place for security during normal activity, yet is easily overcome during the drawstroke without any special effort.

I have a preference for reinforced holster mouths on open top holsters, to help keep them open when the gun is withdrawn.  Unfortunately, the L-Gat doesn’t have this feature, but I didn’t experience any difficulty with the mouth collapsing after the gun came out, and don’t expect that will change. 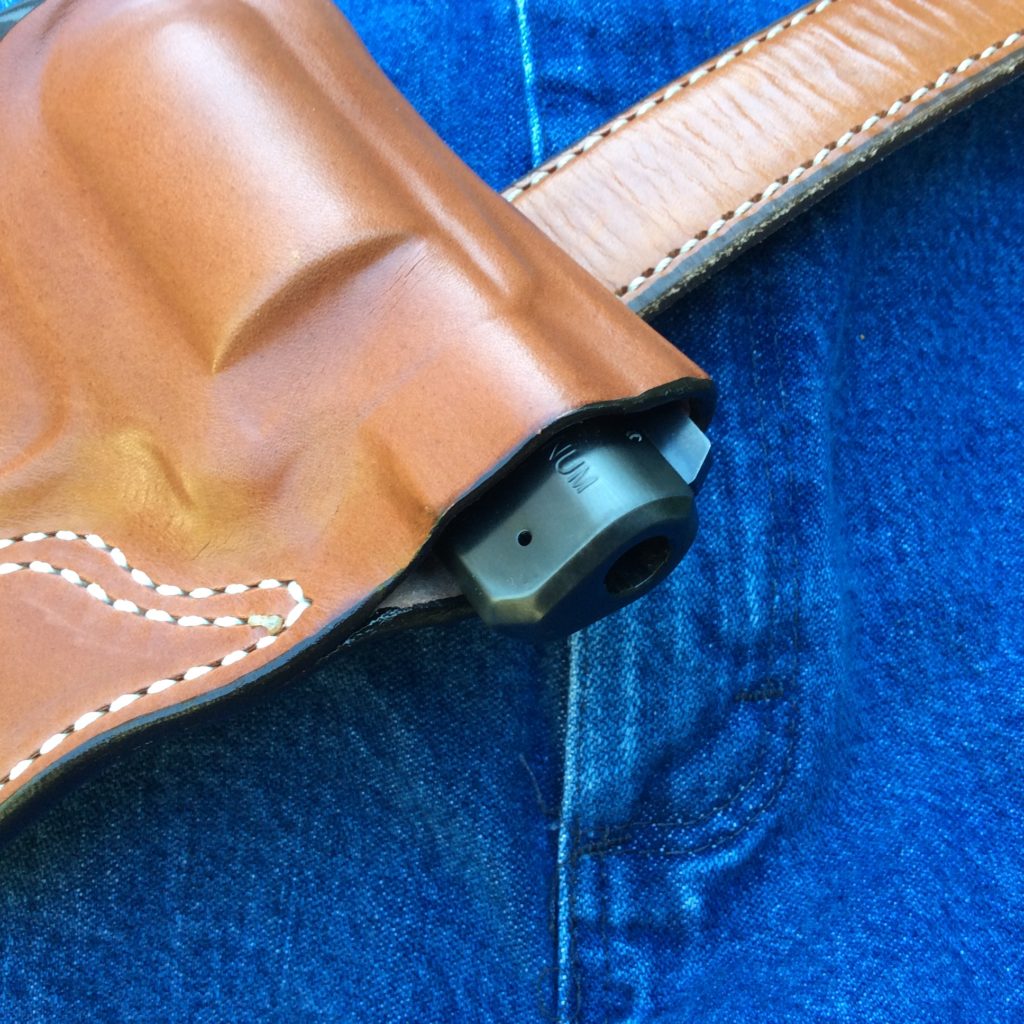 The pouch is flared at the bottom of the front leading edge, to allow the front sight to smoothly enter the bottom of the holster during the draw. If this corner had been left “square,” it would have created a ledge that would grab a front sight (especially one with a vertical, patridge-style blade like my K6s DC), interrupt a smooth draw, and eventually damage the holster. The fact that DeSantis paid attention to a small detail like this is evidence of their excellence in design.

The saddle leather used in the L-Gat will retain its shape, resist stretching, and properly support the weight of the firearm for a very long time. It’s a beautiful, blemish-free hide with a gorgeous tan color and a nice sheen. If you prefer, the leather can be dyed to a black finish as well, but I’d hate to hide this beautiful hide under the dye.

DeSantis uses premium nylon thread and lays it down with a nice, tight spacing. Stress areas are double stitched for strength. This is a rugged holster that will go the distance.

The cut of the L-Gat’s pouch allows for a proper firing grip to be achieved, with the middle finger in contact with the bottom of the frame, and the rear of the frame clear of any extraneous leather that would foul your grasp. Grip access was easy with this design.

The tunnel loop and trailing belt slot on the L-Gat (both cut for 1.75” belts) were placed to allow a medium ride height, putting the trigger and the rear edge of the cylinder right at the upper edge of the belt line. This made the gun stable on the belt, and eliminated any tendency for the all-steel K6s to lever away from the body, enhancing comfort and concealment.

I prefer my strong side holsters to ride with a neutral cant, and the L-Gat Slide was perfect in this regard. I know that the forward rake, “FBI cant” is popular with many gun carriers, but I find that it interrupts my normal draw mechanics, and causes excessive drag with my upright stance.  I’ve shot the K6s in a large number of timed drills and courses of fire from the holster, and it came out of the L-Gat Slide most efficiently. I was never hindered by it.

The L-Gat Slide, like all good holsters, fit the K6s tightly and required some break in. As the trailing skirt started to gain a curve, it improved the holster’s ability to pull the butt of the weapon into my side. I don’t carry concealed guns in OWB holsters because I’ve never found a combination that worked to hide the payload on my tall and thin frame, but I actually felt like I could get away with the L-Gat/K6s combination if I was careful in my clothing selection.  I didn’t experiment with the L-Gat as a crossdraw holster, but it would certainly work well in that role, just like the original Nelson design that inspired it.

The L-Gat Slide is a great holster for general use and casual concealment. It’s a quality design, made of quality materials, and built by experienced professionals with an eye for detail. If you’re a RevolverGuy looking for a solid OWB rig with a neutral cant, I’d highly encourage you to check this one out.