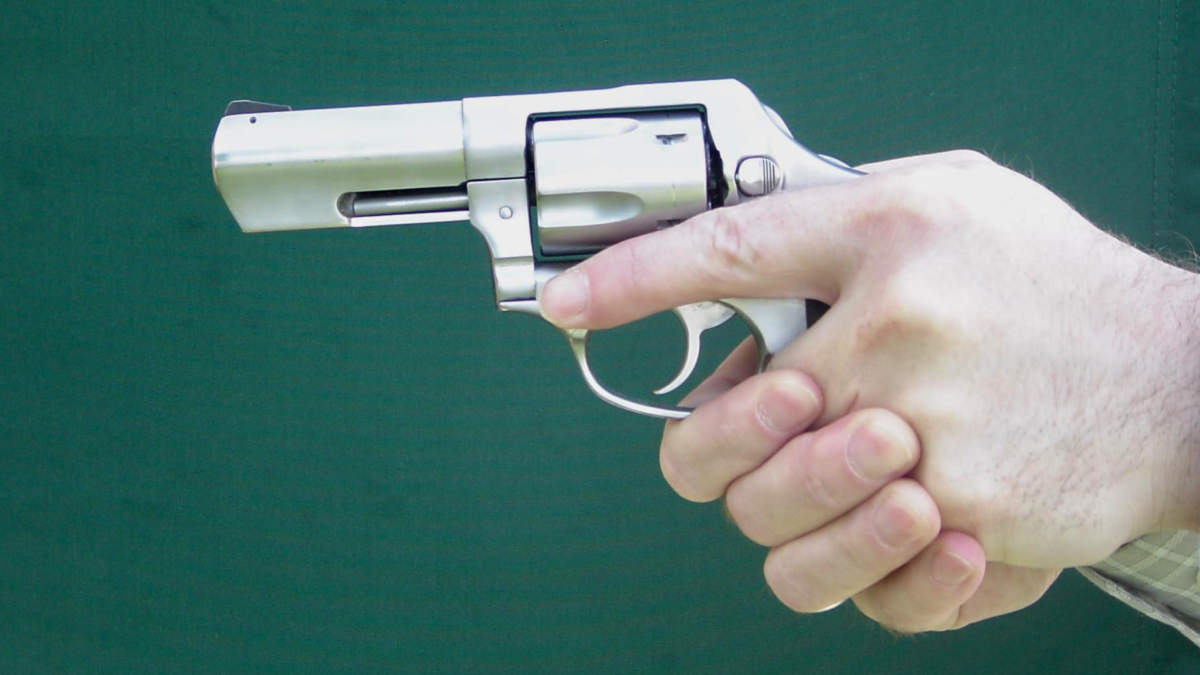 As someone who uses a revolver left handed, I have had to do some work to identify a few reload methods that work well for me. I am sure that none of these are brand new techniques, but I have not seen all of this information presented in a thorough and well explained fashion, nor all in one place. Today, let’s look at what I simply call the Left-Handed Revolver Reload. A strength of this technique is that it works well for all common cylinder release mechanisms.

Because the thumb is already moving down and forward as you reach over the frame, Smith & Wessons are usually released at this point. 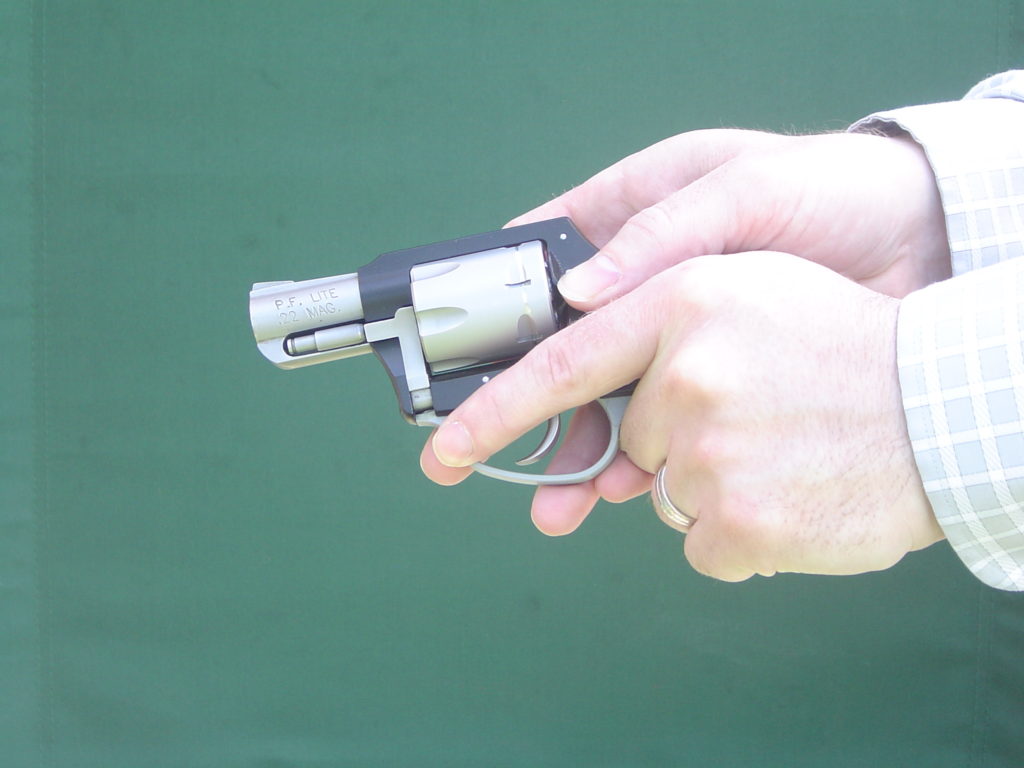 Colt and Ruger latches may be naturally activated as you push the cylinder out of the frame due to this motion twisting the base of the thumb to the right, but this method isn’t quite as fool-proof as the right handed version of Grant Cunningham’s Universal Revolver Reload. In particular, Ruger revolvers may require a conscious effort to release the latch, because the natural movement of the hand is not always sufficient on its own.

Pointing the tip of the right thumb down rather than forward may help. While pushing the cylinder out of the frame with the right index finger, allow the remaining three fingers of the right hand to pass below the frame. The cylinder should be held between the index and middle finger like an over-sized cigar.

At this point we need to talk about gun control. No; not the kind where ownership is restricted, and not the kind where you use two hands to ensure you hit your target. I am talking about the kind of gun control where you make sure all the parts are held in the proper relation and the gun doesn’t get dropped while you are focused on emptying and filling the cylinder. The first two fingers of your hand really do not have the correct leverage to ensure that the cylinder is held all the way open.

In order to keep the cylinder fully open and allow brass to actually be ejected, we must use leftward pressure on the trigger guard with our ring finger, rightward pressure with the top of the frame with the thumb, or both. At the same time, ensure the index finger stays sufficiently rigid to prevent the cylinder from moving. This sounds difficult, but it really isn’t too bad.

As long as you are aware of the concern it is easy to address, but not being aware of it can lead to a partially closed cylinder stopping your reload. Also be aware that curling the right thumb down will block the path of the ejecting brass. While this position is natural, the results are both counter-productive and relatively uncomfortable. Thus, the tip of the thumb should be placed on the cylinder or pointed up towards the top strap.

There are a few considerations at this point based on frame shape. A revolver with an exposed hammer will be fairly stable because the hammer spur naturally goes over the top of the right thumb and keeps it from sliding forward (or the gun from sliding backwards depending on your perspective). Similarly, guns with bobbed hammers usually have a steep enough angle on the back of the frame that there is no sliding. Shrouded- or enclosed-hammer revolvers can present more of a challenge. The hump of a Smith & Wesson Centennial model (the 642 and 640, for example) may or may not present enough of a stop to keep the hand from sliding, while the more rounded back of the Ruger LCR is almost certain to be less stable. Unfortunately, while holding the gun in this fashion, the best recourse for those less convenient frame shapes is to squeeze the thumb into the index finger. This helps with the right-ward pressure mentioned above, but can become uncomfortable over the series of several reloads. 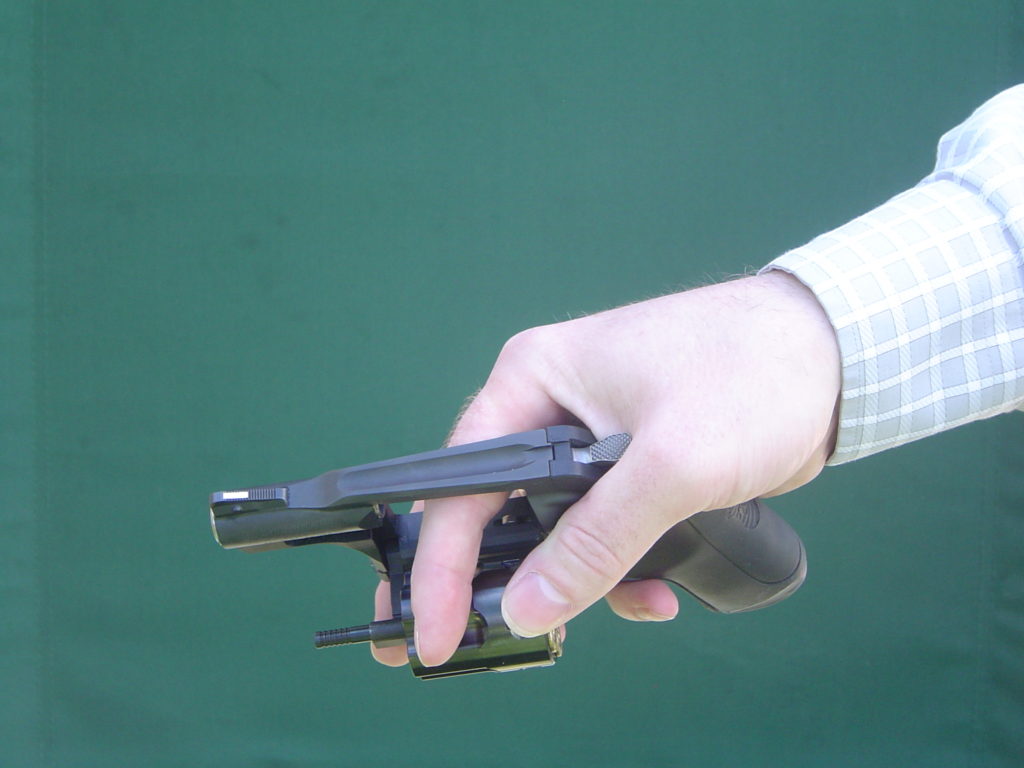 With exposed- or bobbed-hammer guns, forward pressure applied with the base of the thumb will be enough to keep the index finger away from a potentially warm forcing cone, but the other frame shapes may complicate that. If you have concerns about burning yourself on a hot forcing cone, you might consider an alternative method of holding the gun. In this case, we want to reach further forward with the index finger as we release the cylinder. Specifically, the tip of the right index finger should be on or past the frame at the bottom front of the cylinder so that you can push the cylinder out with the first knuckle,  but not have the tip of the finger enter the frame window.

Once you have the cylinder open and under control, reloading is relatively straight forward. Rotate the gun muzzle up and eject the spent cartridges. Then rotate the gun muzzle down. If you are using the standard method of holding the gun described above (cylinder between your fingers like a cigar) you can simply drop your arm and wrist so the gun will be oriented nearly vertically. The alternative method, however requires you to rotate your hand slightly further and some conscious effort may be needed to not relax your wrist into a slightly less vertical orientation. Regardless of the way you hold the gun, you will probably want to relax the last two fingers of the right hand. This allows a gap between the palm of the hand and the grip that will be necessary when we go to reestablish our firing grip. Use the left hand to insert the cartridges into the cylinder using your loading method of choice. I personally use Safariland Comp I speed loaders, but you can use whichever device you prefer. 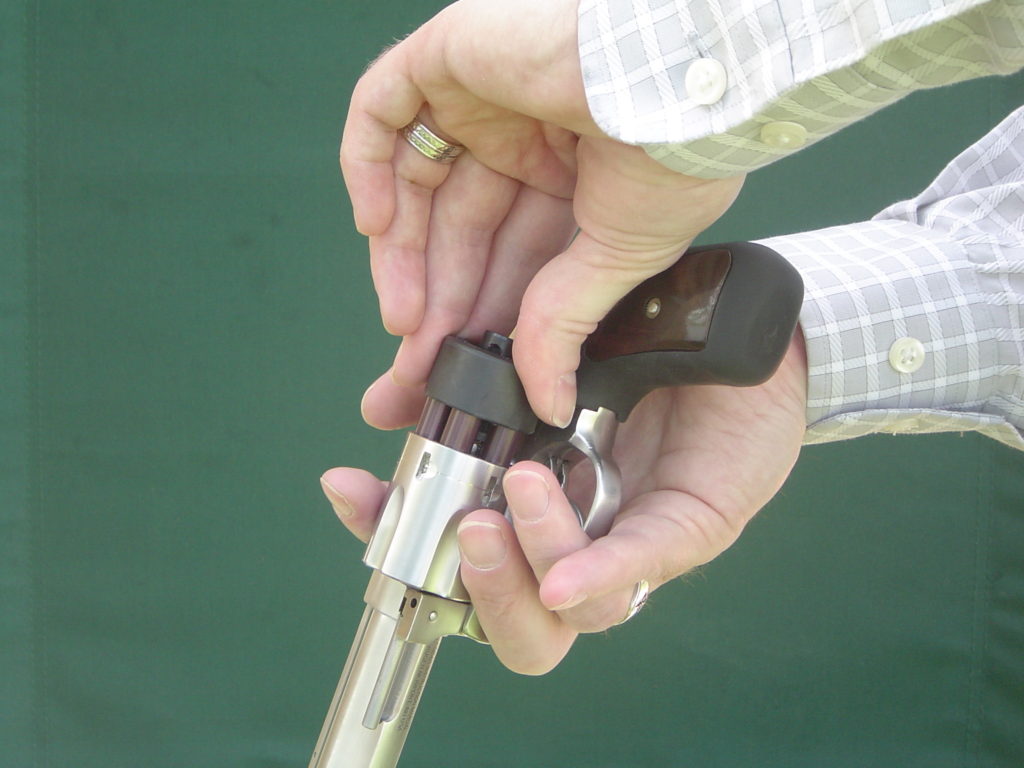 After the revolver is loaded, slide the left thumb between the grip and your right palm to reestablish your grasp on the gun. Because the right wrist is already rotated quite a ways, it is difficult to push the cylinder closed without naturally wanting to raise the muzzle of the gun. Since this can lead to cartridges sliding back and holding the cylinder open, I prefer to hold the cylinder stationary and rotate the gun into position around the cylinder. This can be accomplished with a simple clock-wise rotation of the left hand. 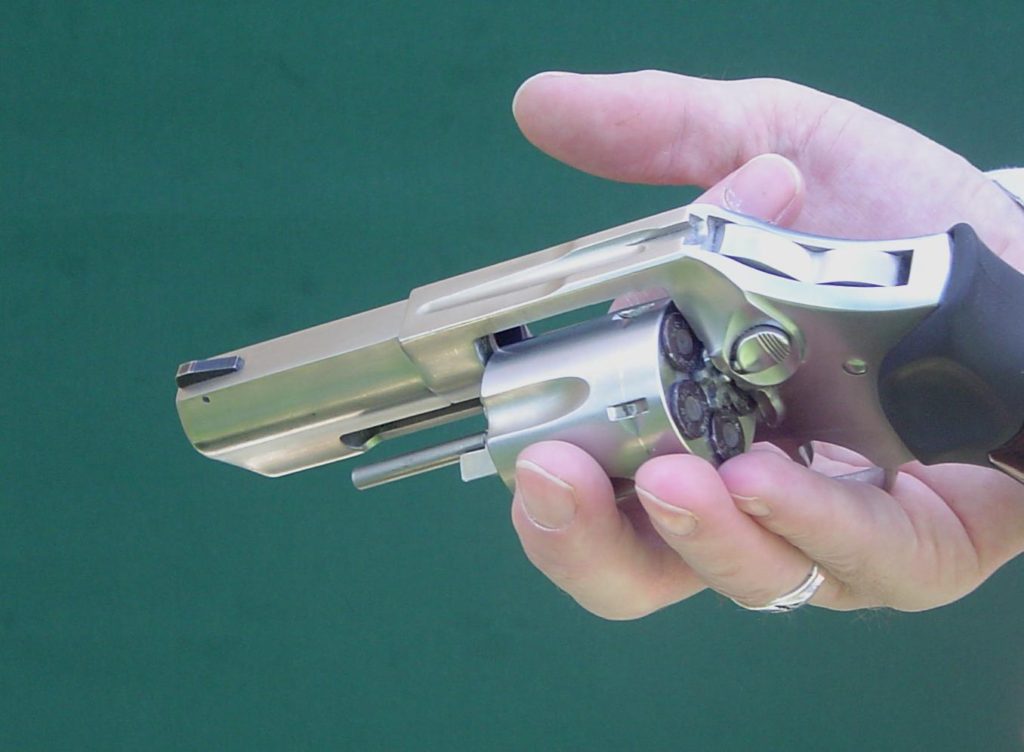 Be certain to curl the index finger of the right hand as you do so. Revolvers may contain a part that Smith & Wesson calls the “hand”, but they do not operate well with additional fingers in the mechanism. At this point, the right hand can slide back into its normal position supporting the left and you are ready to recommence firing. 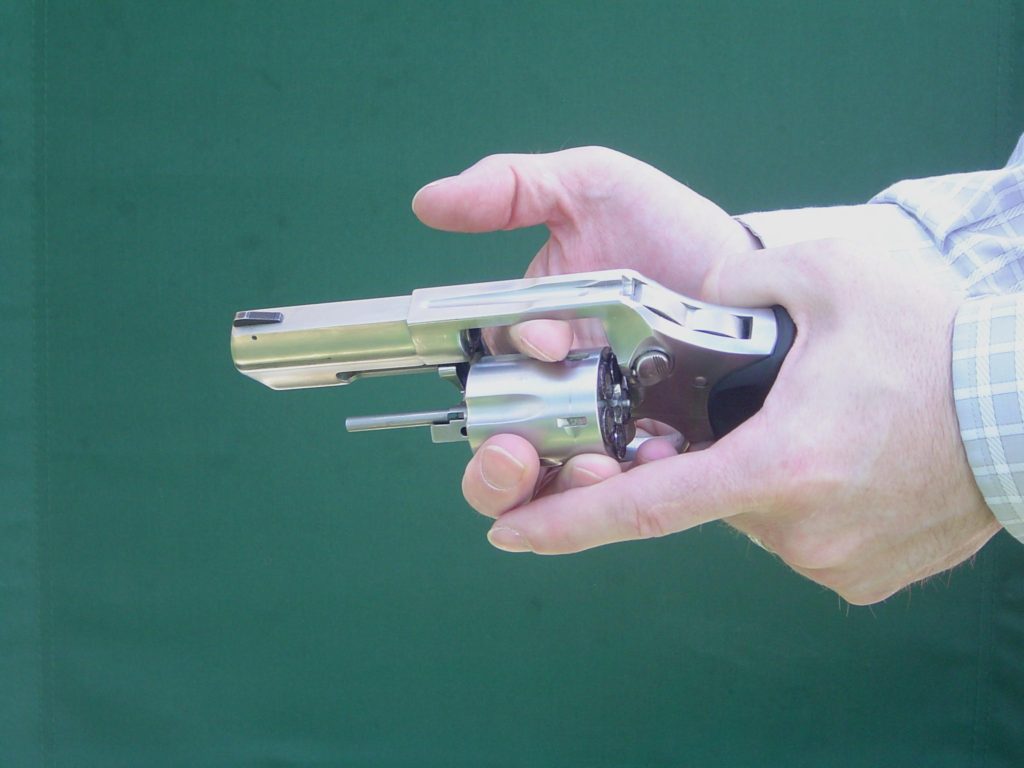 A couple of points deserve special mention. When you reestablish your grasp on the revolver, your trigger finger will naturally be pointed along the cylinder. It seems as though using your trigger finger to close the cylinder would be more efficient, but I have a hard time recommending that approach. If your finger is at all too high, it rolls over the top of the cylinder and enters the frame window, holding the cylinder open. I personally find that it is also very easy to want to rotate the gun away from vertical, increasing the likelihood of spilled cartridges.

It is also rare, but possible, for a speed loader body to become wedged between the frame of the gun and the base of your trigger finger. Using the right hand to support the cylinder and rotating the gun left to close the cylinder  provides more opportunity to let the loader fall away as well as allowing you to use the small finger of the right hand to dislodge a particularly persistent loader.

Editor’s Note: Special thanks for Greyson for taking the time to write this up, and take photos for us. Southpaws are an underserved market and I’m glad to have a solid article addressing their particular reload concerns.