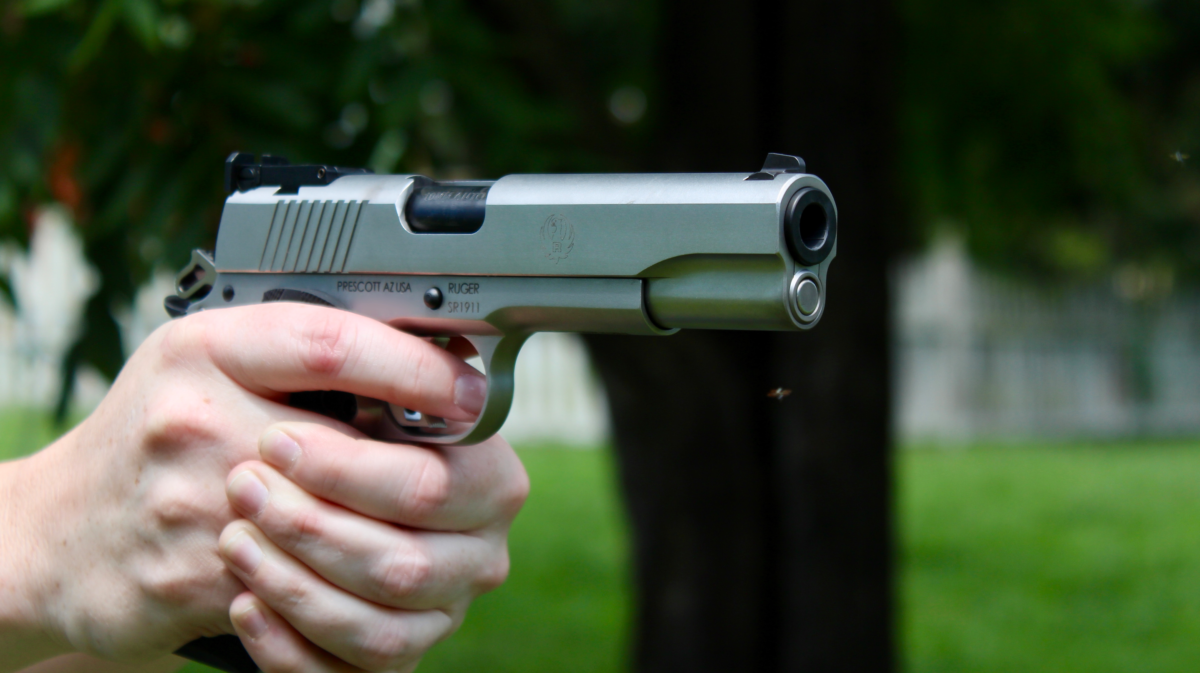 When writing my field report on the 10mm GP100, I was ridiculously curious about the ballistics of the 10mm cartridge from a revolver. Lacking a suitably-chambered auto-loader with which to compare velocities, I reached out to Ruger and asked for a 10mm SR1911. They obliged, and within the week I had slab-side in BestMM sitting beside the GP100. I used it to do side-by-side velocity comparisons with the GP100, and I decided to review it on its own merits. 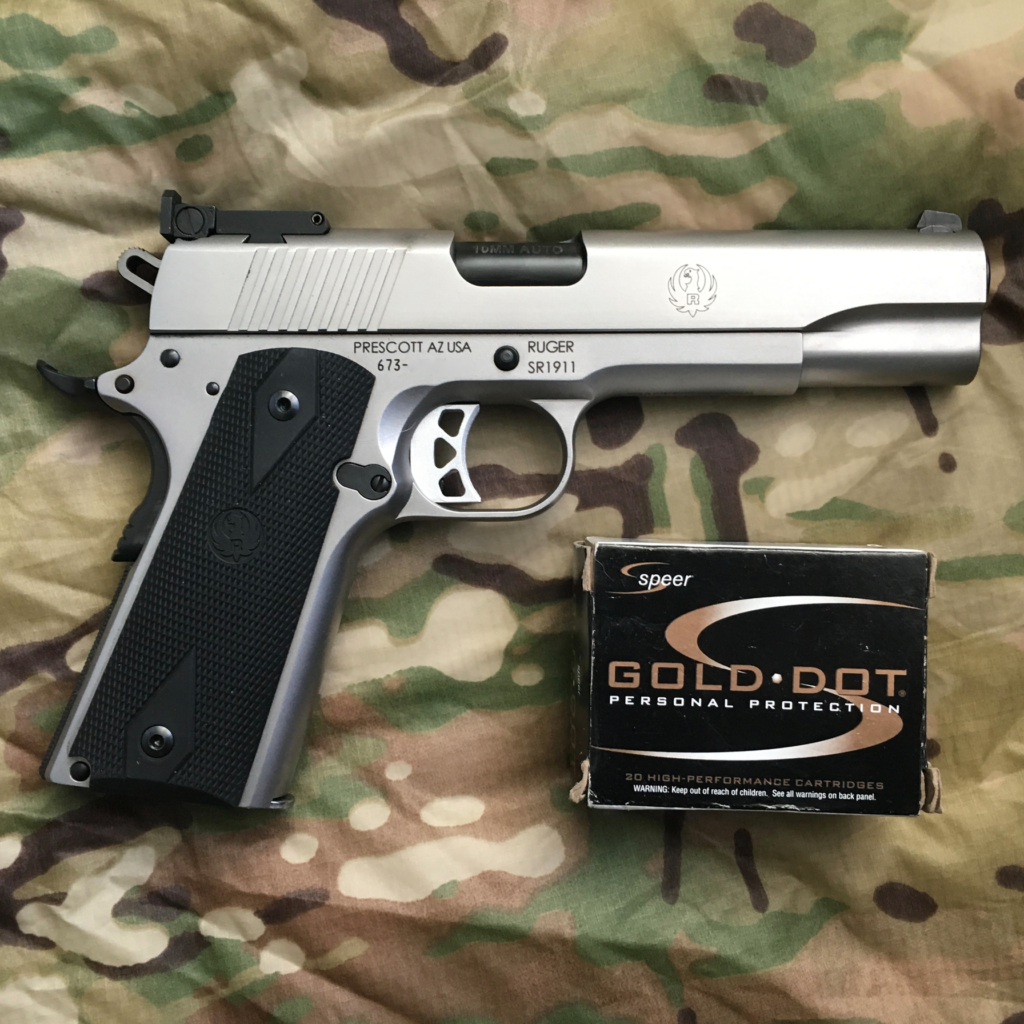 The primary components of the Ruger 10mm SR1911 – the frame and slide – are CNC machined from stainless steel. While at Ruger’s Prescott facility I remember picking up a massive piece of bar-stock steel and admiring its heft. Our tour guide looked at me and said, “there’s a 1911 slide inside of that.” That set my expectations of Ruger’s 1911s pretty high. Unlike Ruger’s Match Champion guns, the slide of this 1911 is relatively unadorned. The right side bears a very simple Ruger logo and the left a stately, “RUGER, MADE IN USA”.  The slide also lacks forward cocking serrations, a feature I generally demand, but the lack of which does contribute to a clean appearance. 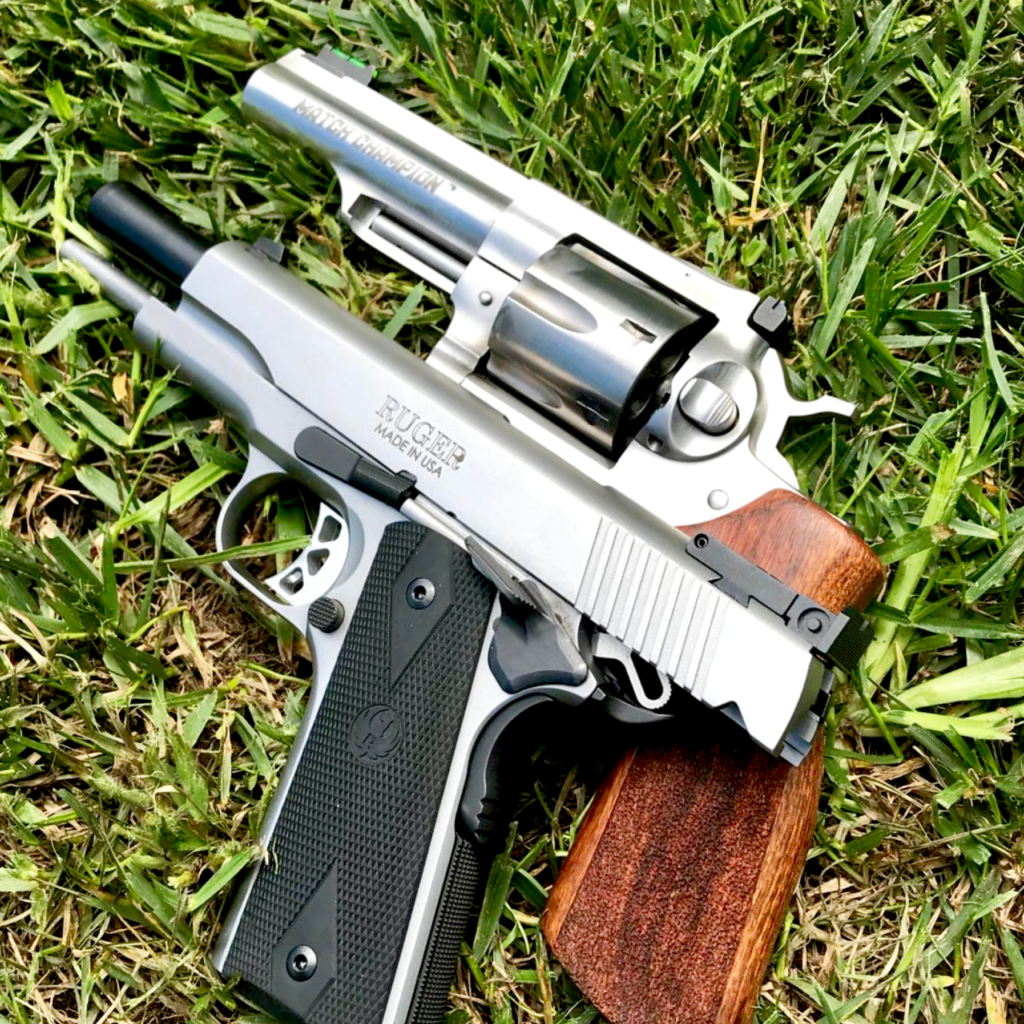 Ruger chose to use a coned, bushingless barrel and full-length guide rod on the SR1911. I don’t have strong opinions on bushingless barrels or full-length guide rods, so do with that information what you will. The sights, slide stop/release (as one pleases), safeties, barrel, and mainspring housing are all black. Combined with the very usable black rubber grips, this is a handsome, two-tone gun that doesn’t look overdone. 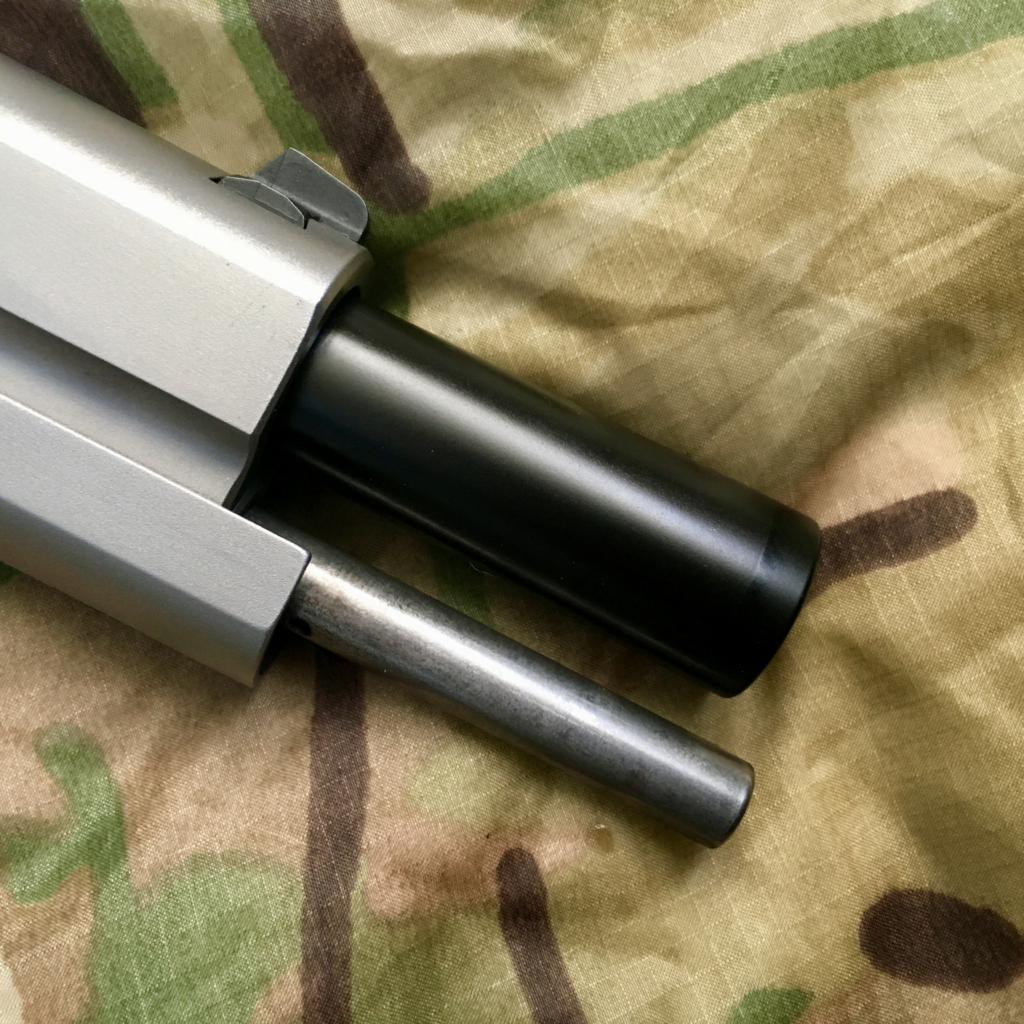 Overall the quality of the 10mm SR1911 is good. The slide-to-frame fit is good for a production gun, and slide travel is exceptionally smooth. The trigger pull is crisp, and comes in right around 4 pounds with a short, sharp reset. Close examination reveals that this is no custom gun, however. The fit of the trigger is particularly loose, with a lot of north/south play. The fit of the thumb safety is not particularly tight, either. Disengaging the safety has a mushy feel but a nice, audible/tactile “click.” 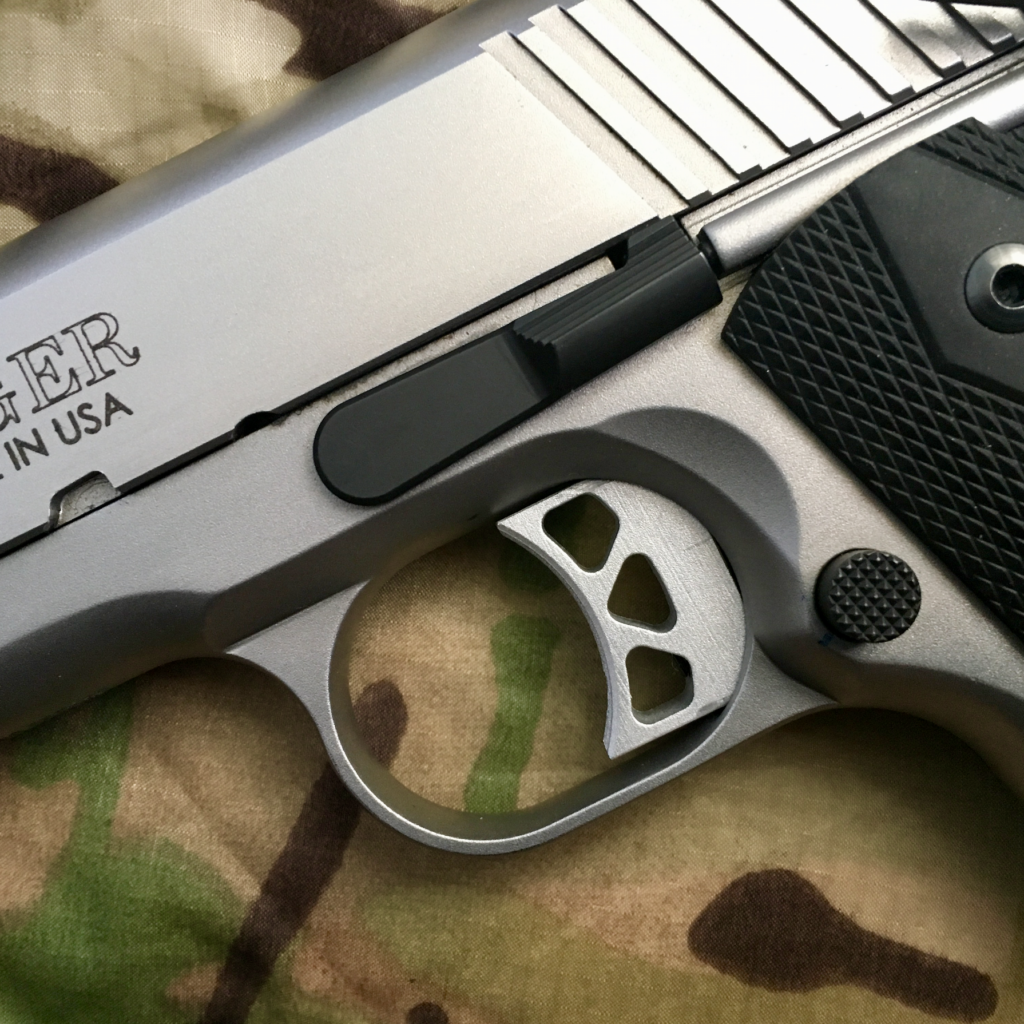 Additionally, the grip safety, and some other small parts could certainly be better, but again, this is a production gun at the low-mid end of the 1911 price spectrum so I’m willing to accept some trade-off. The remainder of this review will utilize Mike Seeklander’s R.E.A.P. methodology. I will examine the 10mm SR1911’s Reliability, Ergonomics, Accuracy, and Power.

The 1911 is rather infamous for being a finicky eater. This problem seems to be exacerbated when one veers from the beaten track and deigns to chamber a 1911 in something other than .45 ACP. With this in mind I was prepared to experience a few malfunctions. On my first range day with this gun I ran a pretty broad selection of ammunition over a chronograph for my GP100 field report. At the end of the session I realized I had fired approximately a hundred rounds, in a variety of bullet weights and styles,  from all over the power spectrum and the gun had worked flawlessly.

So I decided to up the ante. I assembled the odds and ends of various boxes of ammo. I put together four magazines’ worth of mixed loads. Each magazine contained bullets ranging from 100 to 230 grains. Bullet styles were equally mixed: I loaded everything from big JHPs to wide, flat-nosed lead, and even the Lehigh Xtreme Penetrator. I stuffed the first magazine and emptied it as fast as I could. Every round fed, extracted, and ejected as intended. So I repeated the process with the same result. Then I loaded both mags to capacity again and repeated the whole thing. I couldn’t even get the gun to stutter. So far so good! 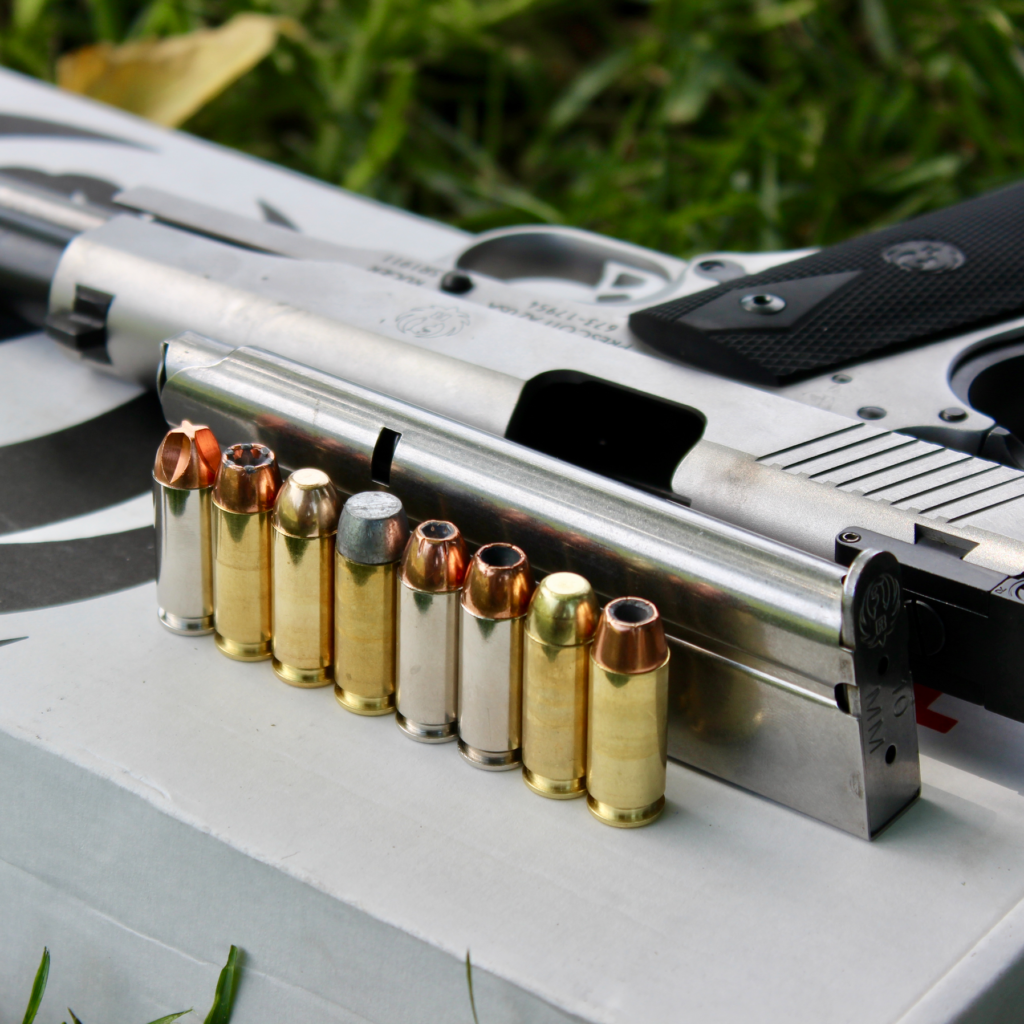 The next step was to shoot a lot of ammunition through the 10mm SR1911. I’ll admit that I didn’t do as good a job at this as I would have liked to. We’ve been reviewing a lot of guns here at RevolverGuy lately, and we have to buy all our own ammo. And by “buy our own,” I mean out of pocket – not from some deep corporate fund. The 10mm SR1911 got short shrift from my 10mm supply, but I did manage to put about 350 rounds through it over half a dozen range sessions. As with the GP100, loads fired ranged from mild to wild, from Federal American Eagle to the hottest stuff Underwood and Double Tap can field. The lion’s share of this ammo was Remington’s 180-grain FMJ.

During the entire testing I only had two malfunctions. For the first one, I can’t say I blame the gun too much. I had loaded up a full magazine of Double Tap 230-grain WFNGC. This bullet has a very flat profile and a very wide meplat – it’s about as close to a true wadcutter as you can get in 10mm Auto. On the third round out of the magazine, the slide failed to go into battery. The edge of the meplat caught up on the feed-ramp. After verifying that I hadn’t inadvertently activated the slide stop lever, a quick “slingshot” corrected the issue. 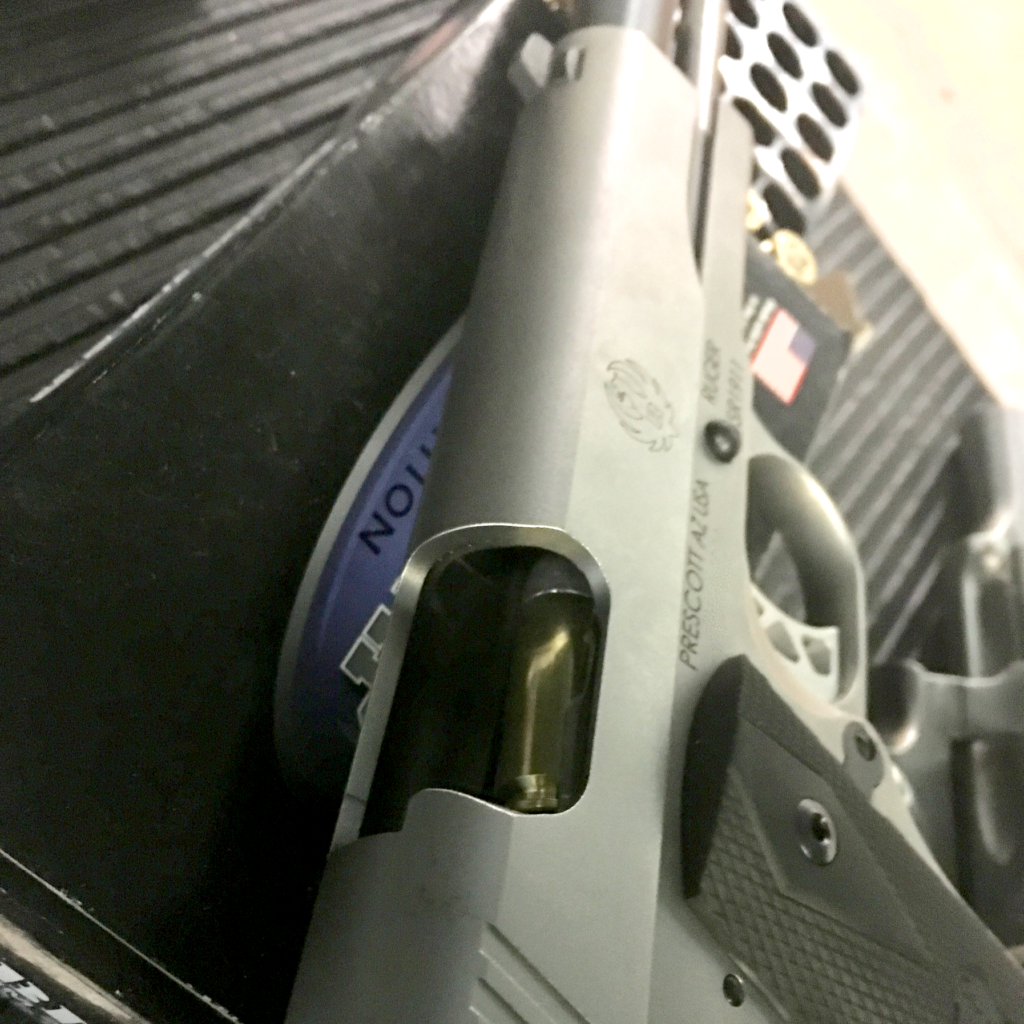 The second malfunction I had was a simple failure of a magazine to lock activate the slide-stop lever. This isn’t ideal, but to me it also isn’t a show-stopper. The only maintenance performed during this test was around the 150-round mark; I added a couple drops of oil to the the slide rails. Overall I am pleased with the reliability of the 10mm SR1911, provided the end-user tests his or her desired ammo/gun combination to ascertain reliability.

There are a number of factors that contribute to the nebulous “ergonomics” category.  This gun is a standard sized 1911, so its general ergonomics should be familiar to most readers familiar with that platform. There are a few specifics I’d like to include here, however.

The first is the one I feel is most important for a gun of this style, and especially in this caliber: the front-strap. The SR1911’s front-strap is smooth. I believe a checkered or otherwise adulterated front-strap to be imperative to controlling the 1911-style handgun. A major percentage of one’s grip is obtained on the front-strap of the gun, and a smooth surface allows precious little purchase. I realize that this is a reasonably-priced handgun considering its quality and caliber, and such modification would raise the price, but I feel that it would be well worth it. In the absence of such a modification, a little front-strap tape from the likes of VZ Grips would go a long way. 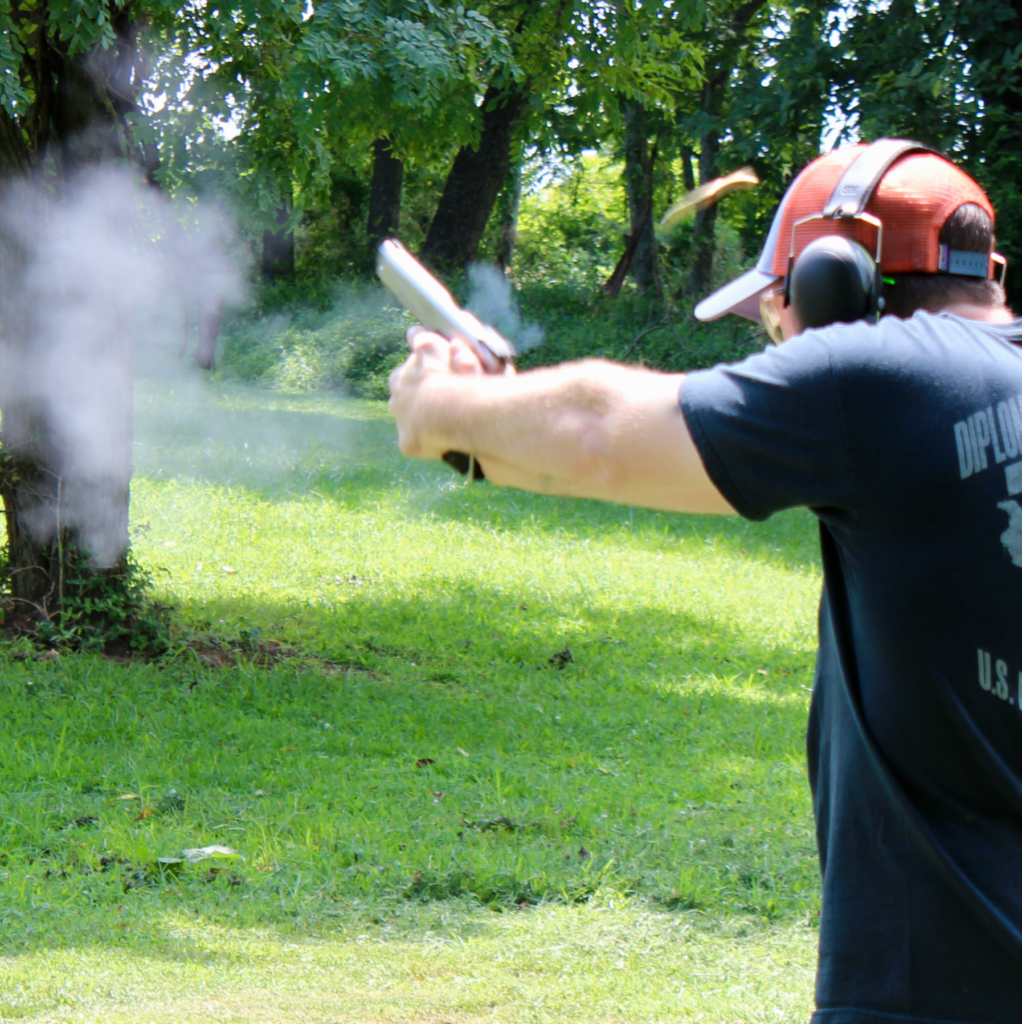 The next 1911 modification I find essential, at least in a defensive firearm, is an ambidextrous safety. I believe this is a relatively inexpensive modification, and feel it should be included on this one. That said, with its target sights the 10mm SR1911 doesn’t seem to be marketed as a defensive handgun, so you may be willing to overlook this omission, or install your own.

The 10mm SR1911 extracted its pound of flesh from this writer. Well, maybe not flesh, but it did draw a pretty exciting amount of blood. When slamming a magazine home, the heel of the magazine caught the fleshy portion of my palm. The magazine seated fully, capturing both the mag, and the palm of my hand in the gun, creating a pretty big cut in the heel of my hand. If this gun were mine I would invest in some magazines base pads to prevent this from happening.

Otherwise, the ergonomics of the 10mm GP100 were pretty standard. If you like the feel of a 1911 in your hand (and I do) you’ll like this gun. Being all-steel and full-sized, this is a pretty heavy gun. Considering its most likely use cases, hunting, woods defense, and target shooting, this should be just fine.

The sights on the 10mm SR1911 are outstanding. The rear sight is an adjustable target model. The blade is wide and distinct, and horizontally serrated to minimize glare. The front is a simple black blade. Though some don’t care for them, I appreciate simple black-on-black sights for accuracy work. I also deeply appreciate the ability to move point of aim to match point of impact. The handful of 10mm loads I fired exhibited drastically different points of impact, depending on bullet weight and velocity. 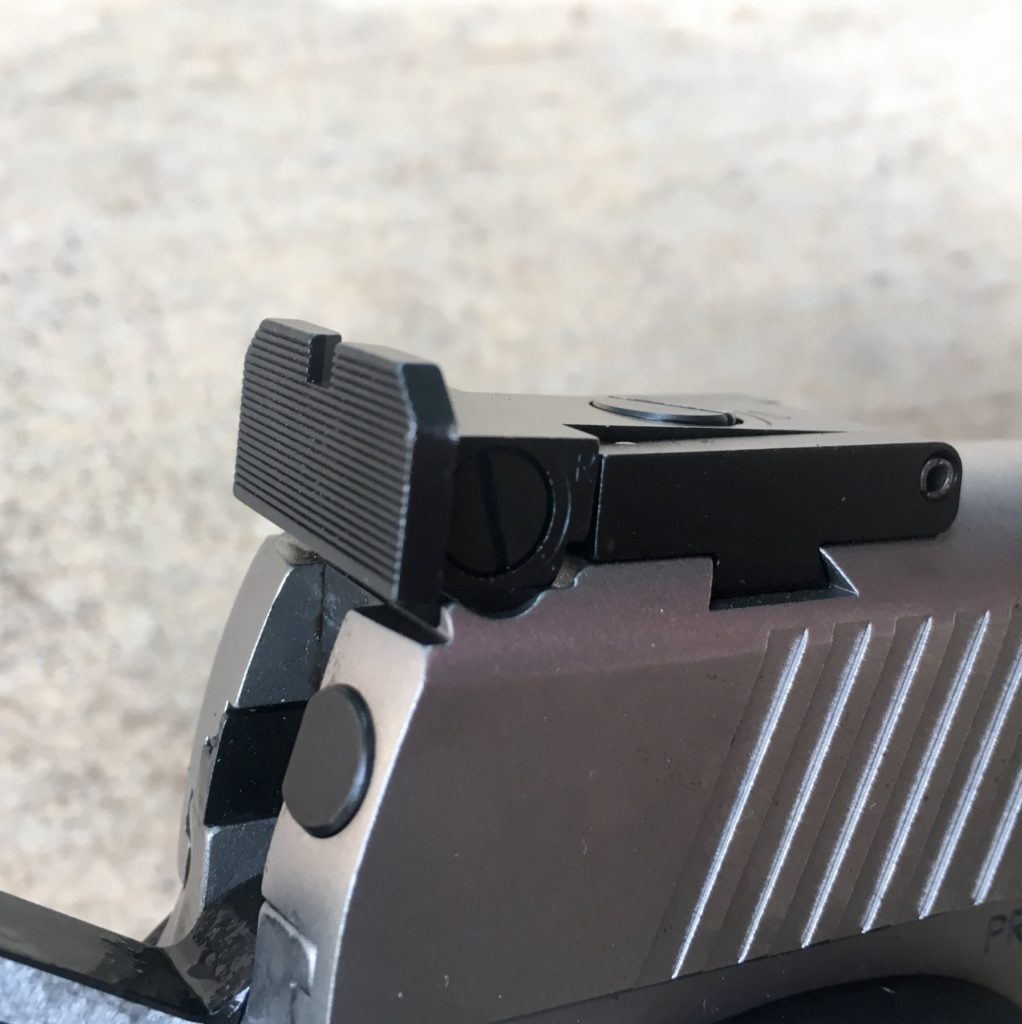 I didn’t test the accuracy of the 10mm SR1911 to an exacting standard. This was partially due to the cost of acquiring a sizeable sample of 10mm ammo, and partially due to time constraints. However, I believe the 10mm SR1911 to be capable of excellent accuracy. The most exacting test I subjected this sample to was fired on a NRA 25-yard slow fire pistol target. I loaded up a full magazine and ran the target out to 50 yards. At that distance I was easily able to keep all eight rounds inside the 5-ring. Just to ensure this wasn’t a fluke I shot the same string of fire twice more with the same result. A more capable shooter would doubtlessly be able to best my results in the accuracy department.

It should come as no surprise that I consider power to be a clear-cut “affirmative” in this handgun. I will compare the 10mm with three other popular defensive calibers: .357 Magnum, .40 S&W, and .45 ACP. The 10mm velocities listed are actual velocities that I captured. Velocities for other calibers are those collected by Lucky Gunner during their ballistic gel test series. This isn’t exactly an apples-to-apples comparison, but I settled on these because I wanted to compare bullets of similar weights. Each bullet in .357, .40, and .45 is the fastest bullet in its weight recorded by Lucky Gunner.

The 10mm obviously has power aplenty, but this power comes at a cost: stiff recoil. Whether or not it is desirable is at the end-user’s discretion. Were I considering the purchase of a firearm for defensive purposes, I would probably reach the same conclusion Chris reached during Lucky Gunner’s 10mm gel test: most of the 10mm’s extra gas is probably wasted for defensive use.  Were I considering a handgun for long-range work, hunting, or animal defense, the 10mm SR1911 would definitely be in the running, however. 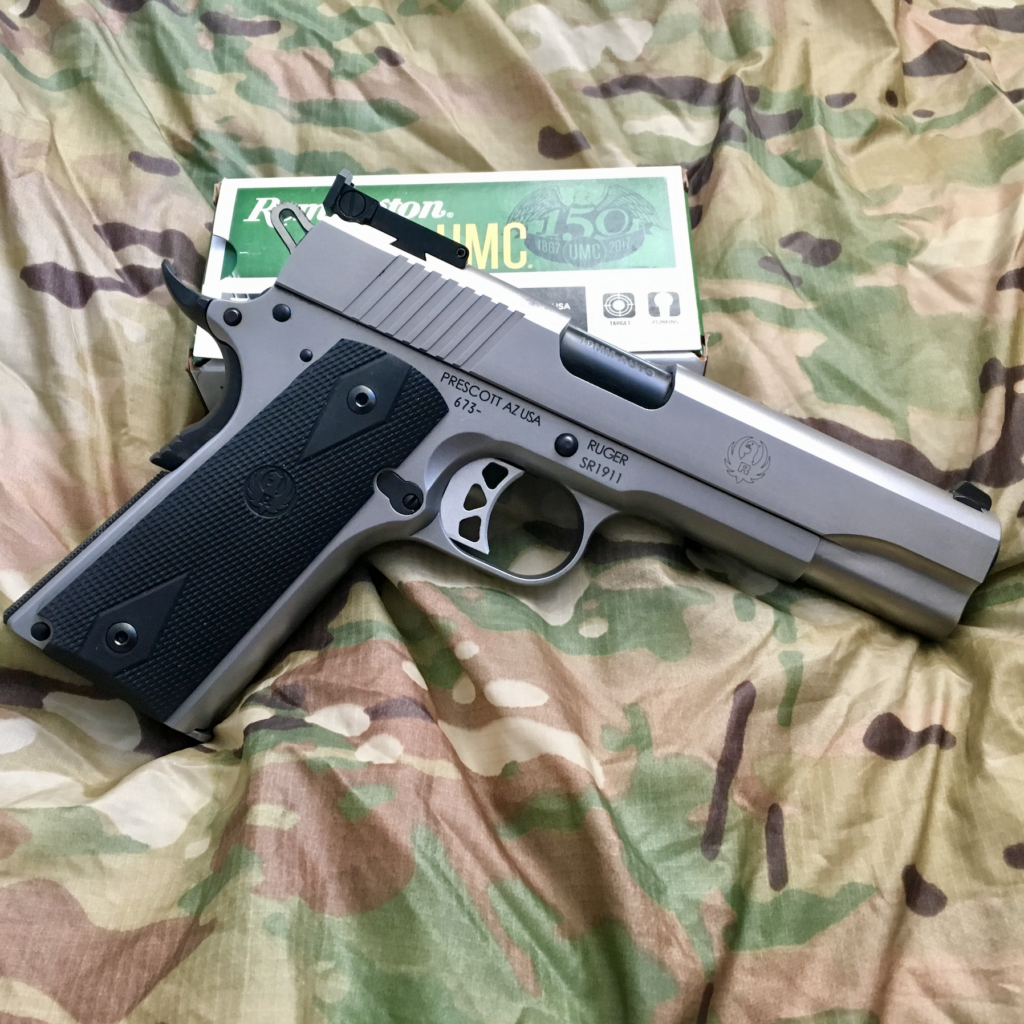 It’s no secret that I’m a fan of the 10mm Auto, for better or worse. In fact, I wrote an article entitled “State of The 10mm” for American Handgunner almost a decade ago, back when only a handful of manufacturers were making 10mm ammo. The list of manufacturers making guns in 10mm was even shorter. It should also go without saying that I’m a 1911 fan. To me the proliferation of affordable, production 1911s in 10mm is truly a dream come true. 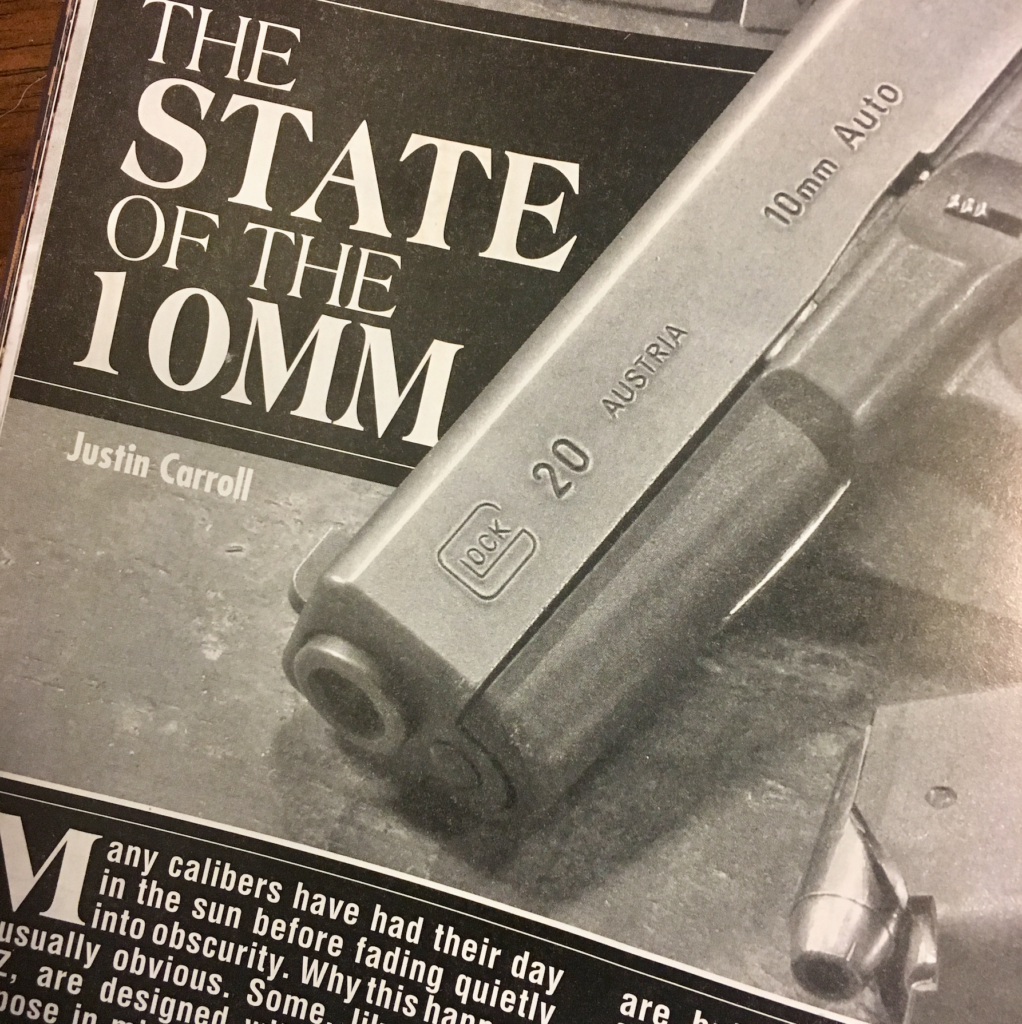