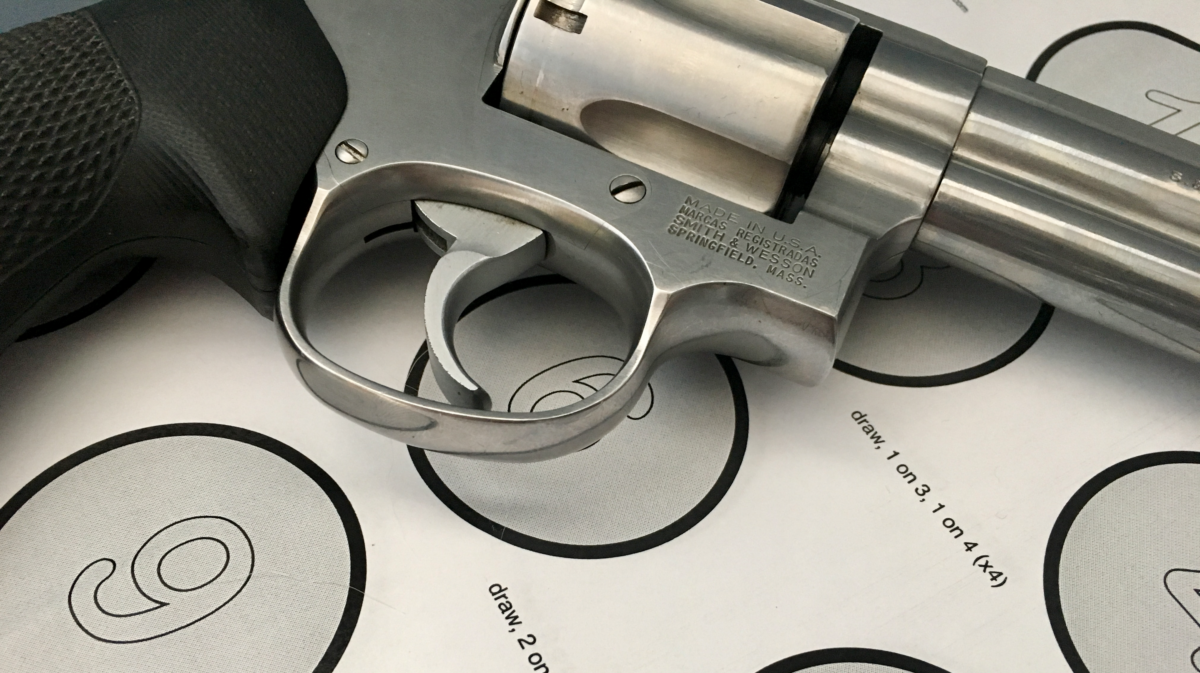 I did a ton of shooting in 2018. I admit that much of it wasn’t as structured as I like. Recently I’ve made it a priority to add some structure to my practice sessions. One drill that is accessible to just about anyone is the famed “Dot Torture” drill. I’m sure most of you are familiar with it but I’m going to talk about it anyway.

My home range is an indoor range, and though they don’t disallow “rapid fire”, drawing, etc., being indoors makes it exceptionally difficult to use a shot timer. This makes it pretty difficult to quantify progress. Recently I’ve begun to lean pretty heavily on drills that don’t require a shot timer. This isn’t a substitute for shooting on a timer, but it’s something.

Dot Torture is excellent in that it doesn’t require a shot timer. You can add some time pressure, and I’ll talk about that later. All it really requires is a target that you can print yourself, fifty rounds of ammunition, a 3-yard range where you can draw from the holster, and about 15 minutes of your time. This drill works pretty much all of the skills that you need to run a revolver effectively: precise shot placement, shooting from the draw, multiple shot engagement, multiple target engagement, and stong- and weak-hand only shooting.

If you find yourself routinely cleaning this drill and not feeling challenged, you can add some more difficulty. The most common way to do this is by adding distance. Adding just a yard or two to the distance can make a huge difference. You can also add time pressure, but in a way that doesn’t require a timer. As the original post on Pistol-Training.com recommends, try shooting it in under five minutes. With my Nighthawk 1911 I can typically shoot this drill in around 4 minutes; because I have to stop to reload speedloaders, I’m a little slower with the wheelguns. It is important to point out there is NO TIME STANDARD for this drill.

I’m not going to explain how to run the drill here. If you’re interested, check out the aforementioned page at Pistol-Training.com. If you’d like to see a video explanation of this drill, check out Lucky Gunner’s article on Dot Torture.

I recently took four guns to the range: my Nighthawk 1911, the M&P Shield, my 686, and my 640 Pro. I’ve been shooting this drill A LOT with the 1911 and I was curious how I’d do with the revolvers. Overall I’m pretty pleased, but I have some room for improvement and learned a couple things along the way. 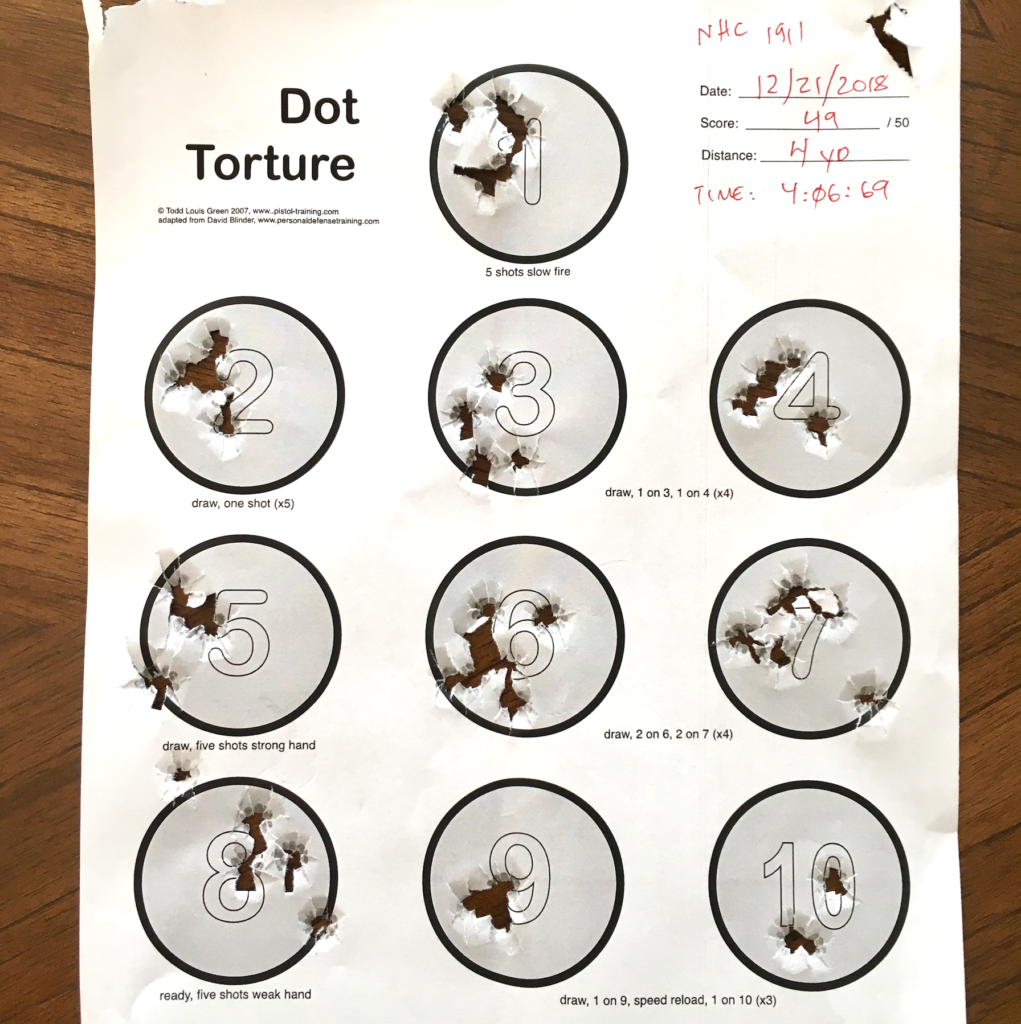 The second round was fired at 4 yards with my trusty 686-3, using 130-grain .38 Special ammunition. I scored a 46/50, with all rounds dropped on the weak-hand only stage. I was pretty happy with my performance, but should have slowed down and worked the fundamentals a bit more. I didn’t time this round at all, due to having to stop to reload speedloaders.

This round was also fired at four yards and I scored a 49/50 with a time of 5:09. This time the only round dropped was on the strong-hand stage. I know what I need to start working harder on! 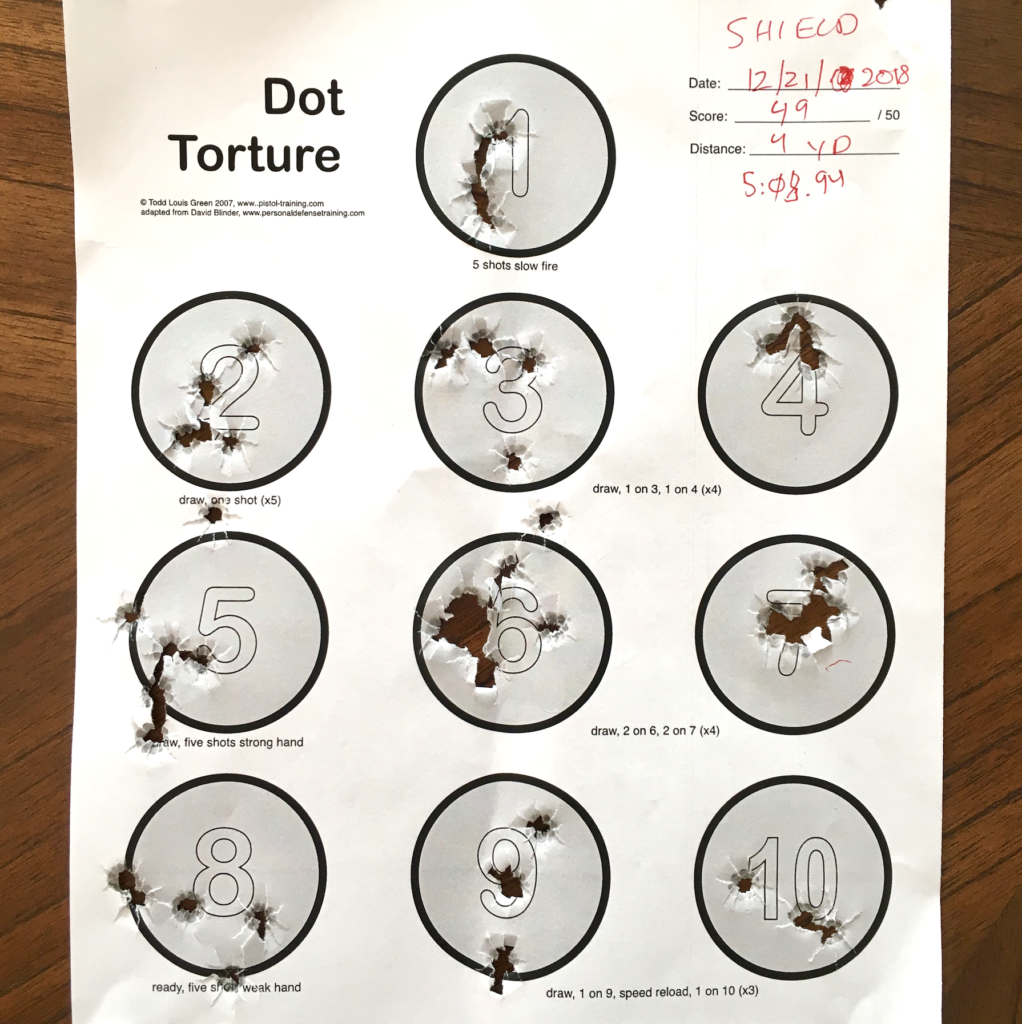 On this round I scored a 44/50 which was better than I expected. I moved the target in to 3 yards, and had to adjust for the low point-of-aim that my 640 has. Again, I did not time this round and I’m glad I didn’t; I was greatly slowed down by the Pachmayr Aluminum “speedloader”. 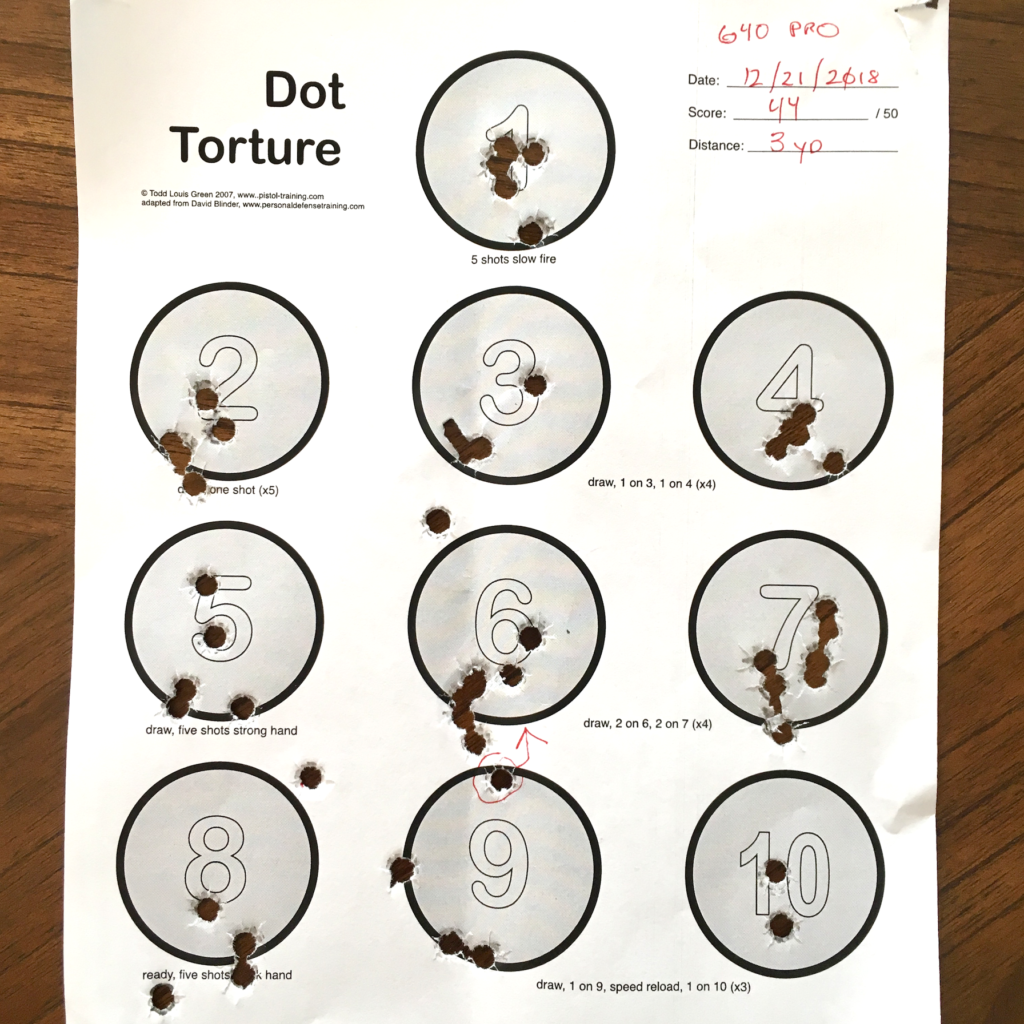 With a little time to kill, I decided to shoot one more more round of Dot Torture with my current carry gun. I pushed the target back out to five yards and managed a 47/50 in 4:41. Unfortunately, my first two shots missed high; I was used to correcting for the 640 Pro’s low POI. 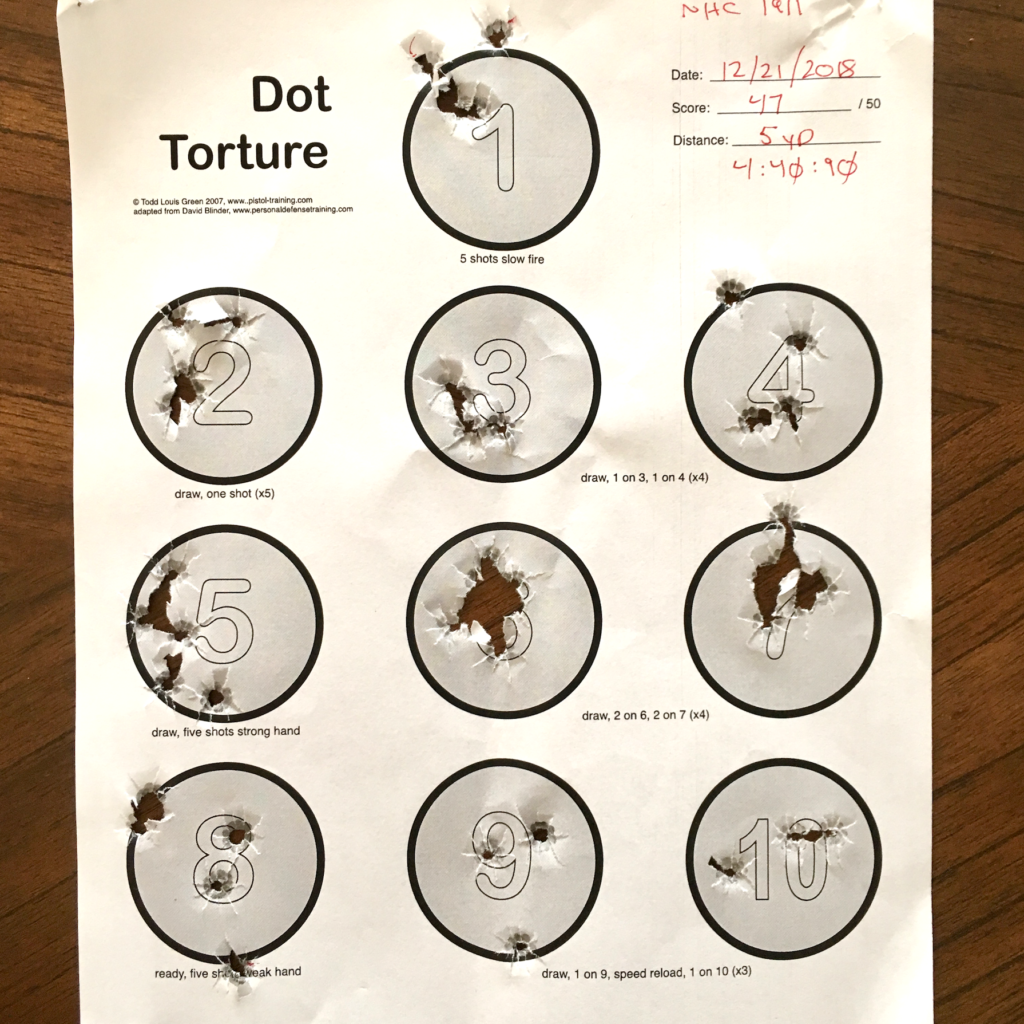 I have a few lessons learned from shooting these four guns side-by-side.

J-Frames can shoot, but you have to work to shoot them. I did OK with the 640 Pro, but certainly didn’t shoot to a standard I’m happy with. I would like to say that I could have slowed down and scored a perfect 50 with the 640…and intuitively I feel I could. But “feeling” and “doing” are two different things. The 640 is an objectively difficulty gun to shoot well. If you’re carrying a J-Frame you have to work harder to make the gun work. The Dot Torture drill is a great place to start doing this work.

I need work on SHO/WHO. I missed a lot of strong-hand only (SHO) and weak-hand only (WHO) shots. I can do a lot of this work in dry practice, and I will be over the coming year.

Revolvers take a lot of reloads. This is probably no surprise to anyone. Running a drill like Dot Torture with a revolver requires a lot of “setup” between strings. This is especially true on the right side of the target (dots 3/4, 6,7, and 8/9).  You can make your range sessions more efficient by having a lot of preloaded speedloaders. 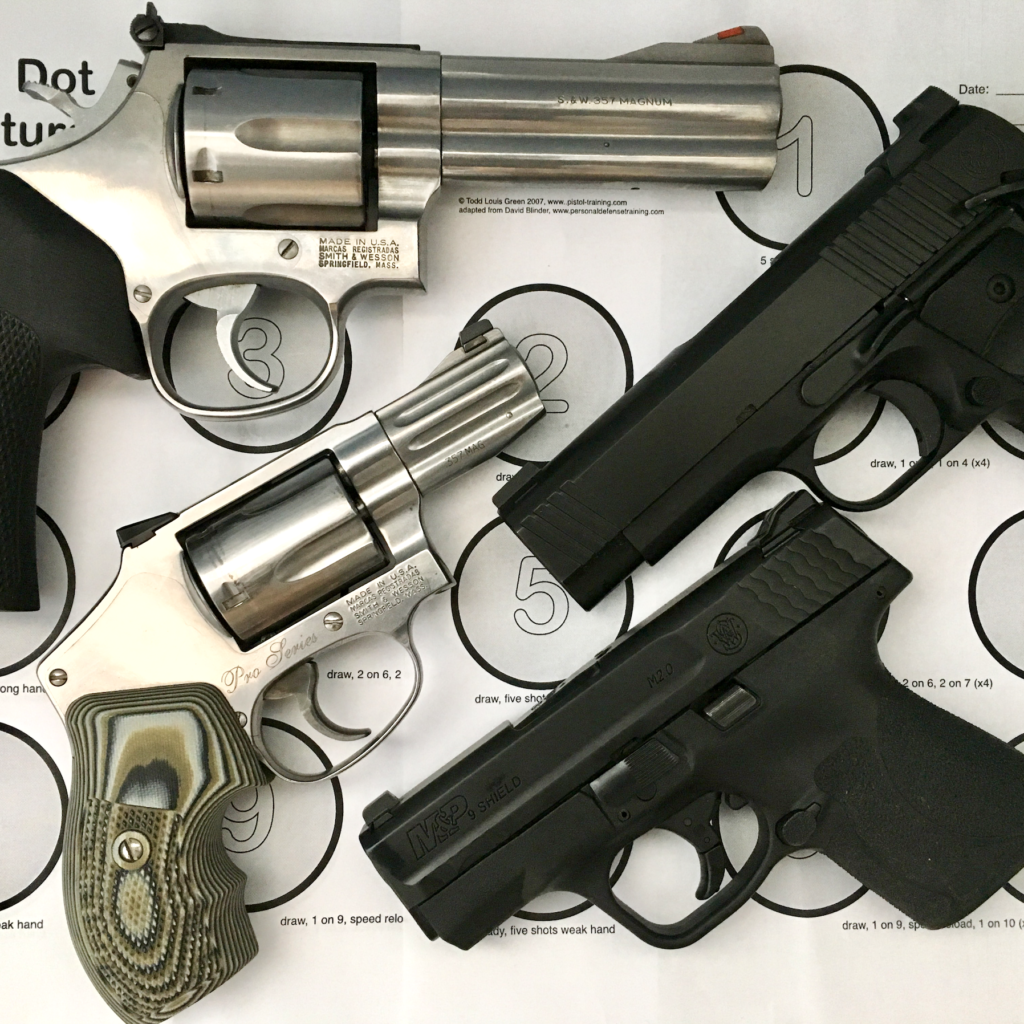 If you haven’t practiced in a while, get on it! If you’re practicing a lot and not using some sort of structured practice session, I strongly encourage you to give this one a try. I was honestly surprised at how well I was able to do with my revolvers, but also acknowledge the fact that I need more work with them.  Let’s get to it!