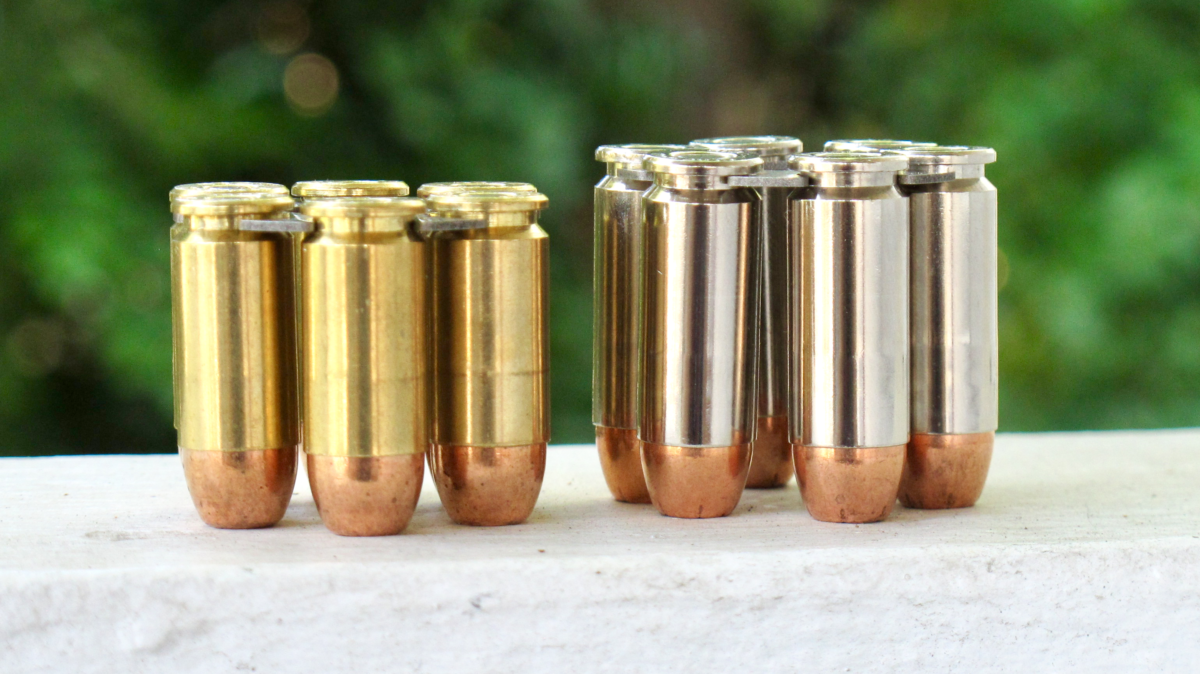 Since its unexpected introduction, I’ve seen a lot of articles and video reviews of the Ruger GP100 in 10mm. I’m not going to mention any names, but many of these have casually mentioned that you can shoot .40 S&W in the 10mm GP100. A couple articles from well-respected outlets have even cited the caliber as “10mm/.40 S&W” in the specifications (Ruger’s own specifications make no such claim).

At the same time, it seems that few of these reviewers have actually tried it. If you share the impression that you can shoot .40 S&W in the 10mm GP100 I might have some bad news for you. I had planned to save this for Part II of my review but I feel like this info needs to get out sooner rather than later.

There are some pretty awesome benefits to being able to shoot both cartridges in one gun, and some specific advantages to shooting the .40 S&W in a 10mm. A lot of these benefits are similar to shooting .38 Special in a .357 wheelgun. First, inexpensive range ammo is lighter than most 10mm loads, letting you practice with really light stuff. If light stuff doesn’t interest you, there are also some stellar .40 S&W defensive loads. After a generation in law enforcement holsters the Forty has gain some serious street cred, and extremely refined bullet designs abound.

Ammo for the shorter round is also cheaper, especially when purchased in bulk. Forty caliber ammo is also much more widely available than the 10mm. Even with the long, slow resurgence of the 10mm, I’m not seeing it behind the counter at my local Wal-Mart. . . but they do have .40. And it just so happens .40 S&W is one round that seemed to weather the ammo drought pretty well. With seemingly everyone standardized on 9mm, .40 has not been hard to find over the last few years. Having a little cartridge flexibility is always a good thing, especially if availability is a concern.

There are also some benefits that are really attractive to competition shooters. The shorter .40 S&W (10×22) cartridge loads a little easier and faster than the longer 10×25. Because the cartridges are shorter and the bullets are closer to the moon clip they are less likely to “droop.” This eases alignment with the chambers and improves overall reload speed. Because they are shorter they also have less travel to seat, making them just a shade faster. The shorter brass also reduces surface area contacting the chamber, which in turn reduces the odds of a round stopping short of fully seating.

As I mentioned in my introductory article on this gun, the 10mm GP100 can be fired with or without moon clips. This is possible because the cartridges take their headspaces from the case mouth. The case mouth sits on a small “ledge” inside each chamber. Using moon clips is nice, as this gives the extractor star something to purchase when ejecting empty cases, but it’s not strictly necessary. Generally I like headspacing off the case mouth; in an emergency you could forgo the moon clip and reload rounds one by one.

Of course shooting without moon clips only works with 10mm Auto ammo. Other, same-diameter cartridges will fit in the chamber but won’t headspace correctly. Being a hair over .13″ shorter than a 10mm case, the .40 S&W would drop too far into the cylinder to make contact with the firing pin (conversely, 10mm Magnum would also fit†, but would stick out way to far for the cylinder to close). Theoretically moon clips should prevent the .40 cases from slipping too far into the cylinder. 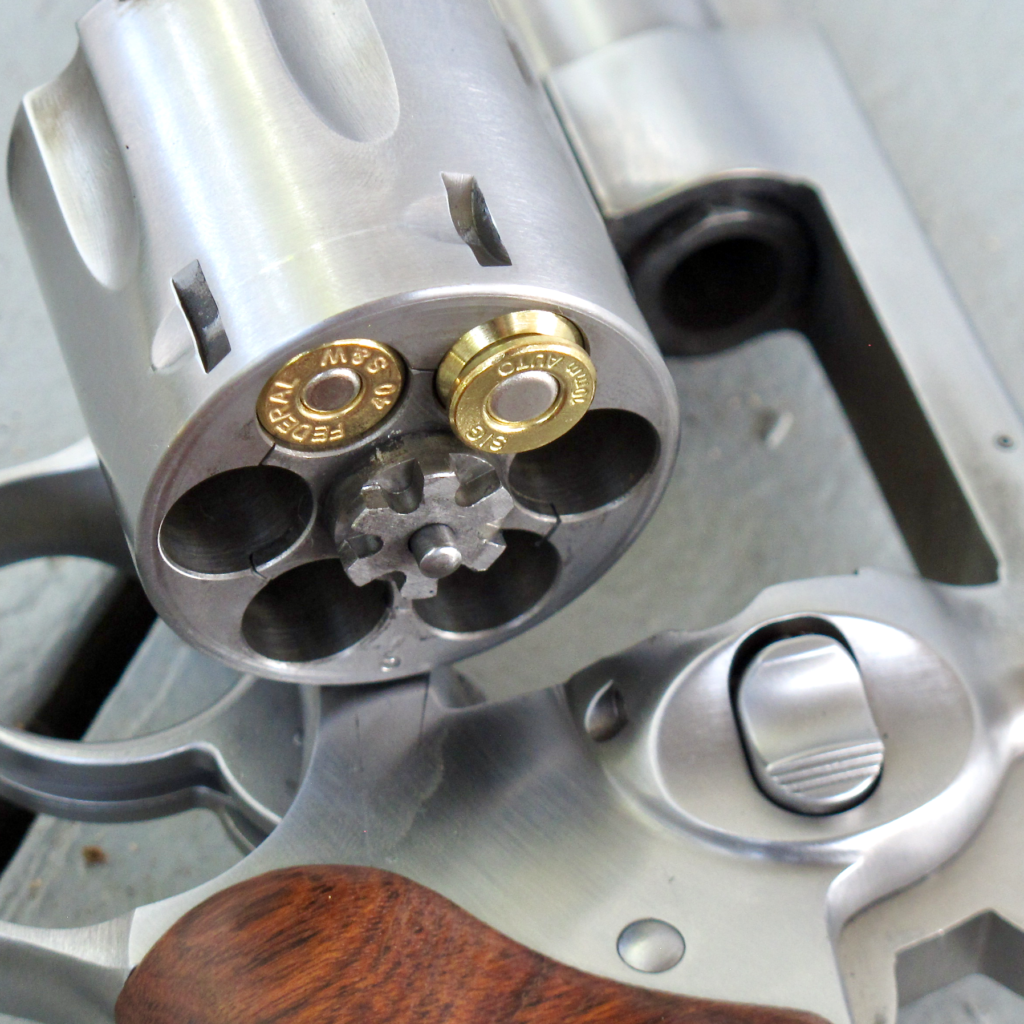 With all those benefits in mind I was pretty stoked on the idea of shooting some .40 S&W in the 10mm GP100. I was mostly interested just for the novelty of it – I am a 10mm man, after all!  I was to be disappointed. While at Mike Seeklander’s Handgun Competition Course I passed the GP100 to Mark, a State Trooper and man who knows his revolvers. Mark offered to give me a few .40 S&W rounds from his Glock.  He put a few in a moon clip and sighted in the gun. The first BANG! was followed by a very loud “click.” And another, and another before the gun finally went BANG! again.

Mark ejected the clip and we took a look at the cartridges.  Two cases, and a bunch of very, very light strikes. Just to verify it was the gun and not the ammo, Mark unloaded the moon clip and transferred the rounds directly to a Glock magazine. Every single one worked as intended, so we ruled out ammo as the issue.

To be honest, I was only a little surprised by this. The 10mm cases are held pretty high in the cylinder. So much so that moon clips are sort of “free floating” within the extraction grooves in the cases. Moon clips provide no support at all for the 10mm cartridge in this revolver so I had some nagging doubt about their ability to properly support the shorter cases. Still not ready to be defeated, and smart enough to know what I don’t know, I contacted Tom at TK Custom, a manufacturer of exceptionally good moon clips.

Tom was happy to talk to me. He thought the issue was the OEM moon clips. If you take a look at them, there is a cut between each cartridge notch. That is on purpose, and its intent is to make the clip loadable and unloadable without the aid of tools. That part of the design works beautifully – the clip is easy to load and unload. Tom thought that the clips might not provide quite enough support for the shorter .40 cases, which aren’t long enough to headspace off the case mouth as the 10mm Auto does, so he shipped me out a set of his clips.

I’ll address both the clips and TK Custom’s moon clip loader and unloader in a future article, but rest assured, they are top of the line. Outfitted with my new clips, I headed to the range and, for the first time in my entire life, purchased a box of .40 S&W ammunition. I quickly loaded up six and threw it in the revolver. Much to my dismay I had the exact same results. Two rounds of the six fired. Though I didn’t take photos, the primer strikes were deeper than those observed previously, but not enough to ensure reliable ignition.

I reported my results to Tom. He asked me to measure the headspace of the 10mm Auto cartridge, and a .40 S&W cartridge, both in moon clips. The difference was pretty stark. With the longer (and correctly headspaced 10mm Auto) I measured a distance from primer to breach face of .010″. With the .40 S&W this distance was increased to .025″, an increase of 150%. Tom responded with, “We may have to thicken the moon clip. Let me know. We’ll make it work for you & your readers.”

I want to be able to shoot .40 S&W in the 10mm GP100 but it isn’t a reality at the moment. Some Match Champion owners have even converted their cylinders to fire 10mm Magnum (10×32). Such a conversion would theoretically allow one to fire the 10mm Magnum as well as 10mm Auto and .40 S&W. One imagines that in practice this would create the same problem with both 10mm Auto and .40 S&W and, at least for now, relegate you to firing only the more boutique cartridge.

It seems to me that a moon clip could be made with some additional shim material left at the center of the clip only. This would serve to raise the .40 primers to the correct height, while leaving the outer portion of the clip narrow enough to fit in the cartridges’ extraction grooves. Now I’m way out of my lane; I have no idea if that’s feasible or what would go into manufacturing such a product. In the meantime I will refrain from shooting .40 S&W in the 10mm GP100 and be content with using standard 10mm ammo, most of which is loaded near .40 S&W levels anyhow. If you’re thinking of buying the new Ruger for use with .40 ammo, you might hold off until a workable solution is in.

†If the 10mm Magnum interests you, this revolver is an excellent conversion candidate!