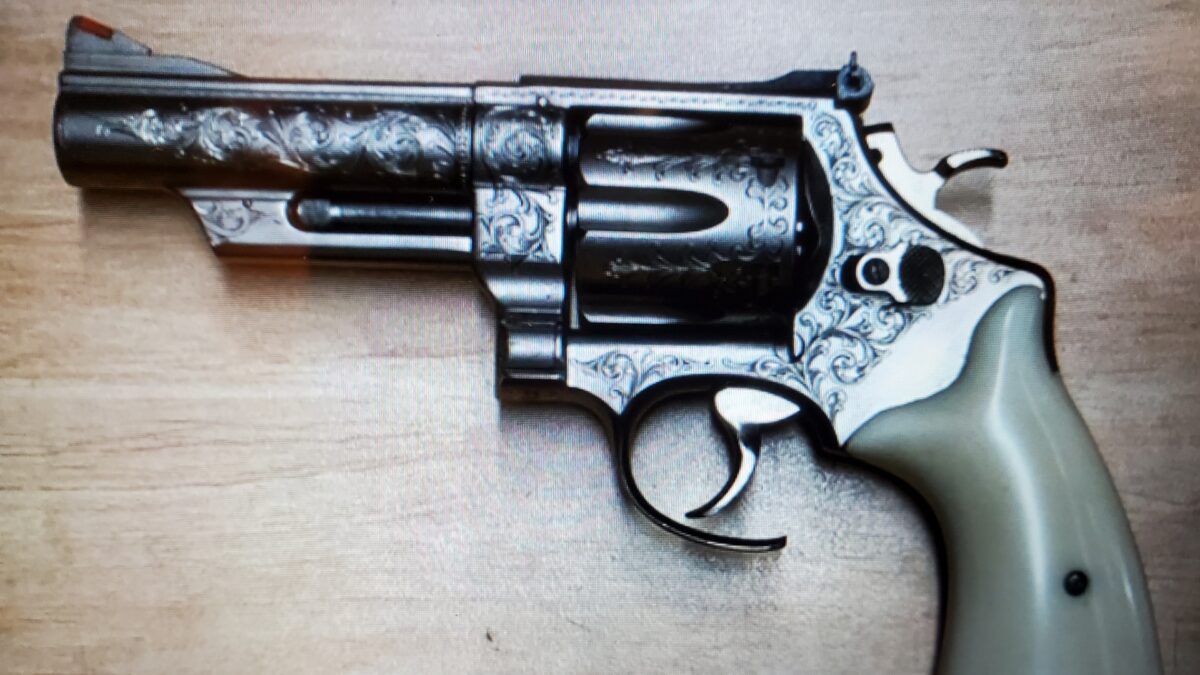 In the wake of Steve Tracy’s excellent article on his Colt 1917 Fitz Special conversion, we thought it would be timely and appropriate to address a related, but lesser known, revolver modification known as the “Schlitz Special” conversion.

The most notable feature of the better known Fitz conversion is, of course, its cutaway trigger guard. This cutaway guard is frequently cited as an effort to improve trigger access, but has more recently been described as an aid to weapon retention (by preventing the trigger finger from becoming trapped and broken inside the guard in a disarm attempt).

There are other aspects of the Fitz conversion, to include bobbed hammers and abbreviated barrels and frames, but the Fitz’s cutaway trigger guard is the signature element of the design.

It was this eye-catching feature which grabbed the attention of a pair of would-be firearms designers from the West Virginia/Kentucky border region. James “Bubba” Hatfield and Jasper McCoy were debating the merits of the Fitz conversion one evening, over a case of their favorite beer, when Hatfield suggested that Colt’s John Henry “Fitz” Fitzgerald got it all wrong with his unique trigger guard modification.

”I was thinkin’ that cuttin’ away the front part of the thing didn’t make no sense,” he told RevolverGuy in a recent phone interview, “cuz your finger don’t come at it from the front, see?”

Sensing our confusion, Hatfield’s business partner, McCoy, clarified for RevolverGuy, “What Bubba means, is that yer fingers is all behind the trigger guard when you hold the gun, so obviously yer trigger finger is comin’ at it from behind, so the back part is what needs hackin’ on.”

Annoyed at the interruption from his pal, Hatfield then blurted out, “Dang it Jasper! I was the one tellin’ the story before you butt in, so shet yer darned mouth!”

”It was my idea to begin with, Bubba!” replied an angry McCoy, before a commotion on the other end of the line interrupted the interview, and the phone went dead amidst the sounds of yelling, grunting, and a chair breaking.

A subsequent interview clarified more details about the history and intent of the design.

Hatfield explained to RevolverGuy that when a gun is holstered, the hand approaches it from behind, to obtain a grip on it, so it seemed appropriate to relieve the rear of the trigger guard to improve trigger access, since it was the first obstacle the finger would encounter on its way to the trigger.

With a case of Milwaukee-brewed hops fueling their imagination and creative energies, the dynamic duo decided to put their theory to test. A suitable candidate for the conversion was fetched from a tackle box in McCoy’s pickup truck (a prized, Rohm .22–“one of them fancy German guns”), and the budding gunsmiths commenced their work with an old hacksaw.

Unfortunately, the rusted blade broke almost right away, which caused a minor kerfluffle that delayed the work until the following day, when both men had nursed their wounds with ice and more beer.

But the power of the idea was “strong as the smell of momma’s feet,” and the pair resumed their task the next evening with a fresh case and a replacement hacksaw, borrowed from a neighbor. Within a few minutes, the first Schlitz prototype had been completed and was ready for testing.

Since it was McCoy’s gun, he was given the honors of being the first to fire the conversion. After firing a full cylinder from the modified revolver (an impressive feat, in itself, from  a Rohm), he determined the unique cutaway guard was a success, since his trigger finger, “didn’t once get hung up on the back.”

Further testing from Hatfield produced similar results, and the pair found that as the night wore on (and their case of liquid creativity diminished), they were able to fire the gun “with amazing speed,” like never before. Additionally, the accuracy of the modified arm seemed unmolested by the conversion, as the partners were able to place accurate hits on a tin roof, a barn door, a pickup truck window (McCoy’s, which started another fight), and an old milking can (which may have actually just been a ricochet off the heavy timber of a roof beam).

Moving targets proved harder to hit though, as the old milking cow that went with the can escaped, unscathed.

Buoyed by their success, Bubba and Jasper have begun to offer their unique conversion to the shooting community, but admit sales have been slow since they hung out their shingle (technically, a scrap of cardboard from a case of Schlitz).

They’re confident, though, that the novel idea will catch on, and report that they’re in conversations with a “major manufacturer” who’s interested in purchasing the rights to the unique design.

Hatfield and McCoy are tight-lipped about identifying the mystery client, and we have to admit we’re a bit stumped here at RevolverGuy. With the breakup of Freedom Group, there’s no obvious suspect on the list, but we’ll continue our investigation and will provide updates in these pages.

25 thoughts on “The Schlitz Special Revolver”