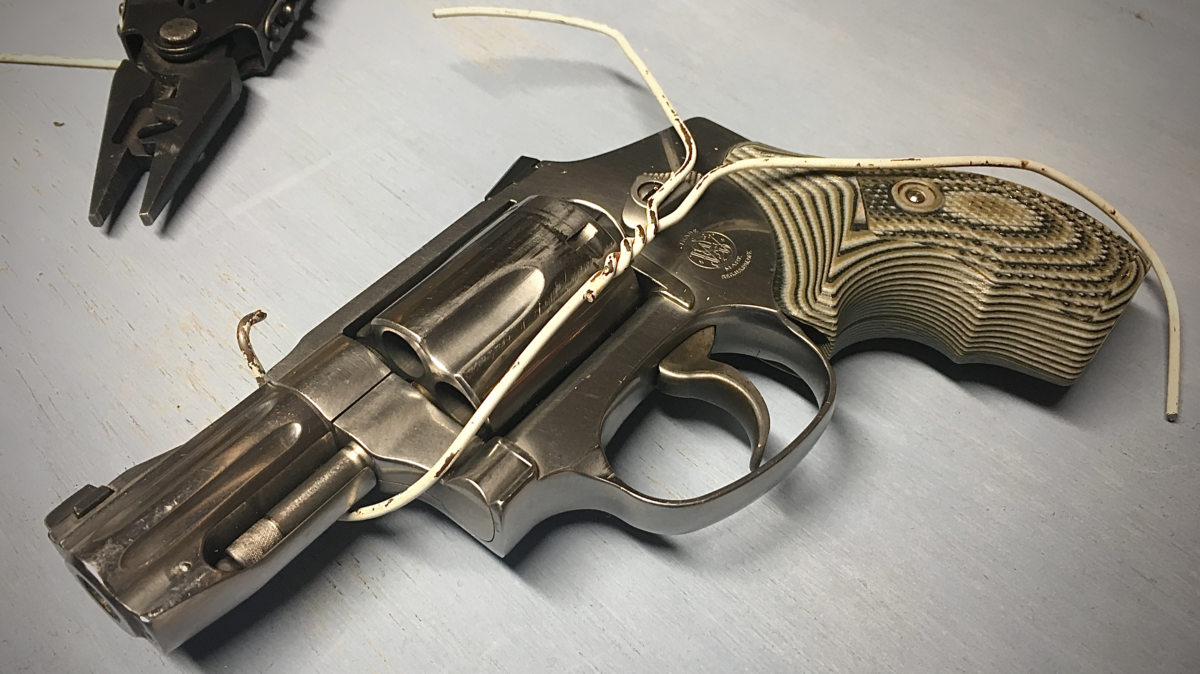 A couple weekends ago I picked up the most recent issue of Skillset Magazine (Summer 2019 Edition). Much to my surprise, one of the articles was on the use of snubby revolvers by, shall we say, interesting personnel. The featured photograph caught my eye because there was a twisted piece of coat hanger wrapped around the an old S&W .38. I didn’t understand what I was looking at until I read the article and saw the term “coat hanger carry.”

Disclaimer: RevolverGuy and its staff recommend always using a holster that protects your firearm’s trigger from accidental actuation. If you use the techniques presented here, you do so at your own risk.

What The Heck is Coat Hanger Carry?

The concept intrigued me. Though the article didn’t explain how to execute coat hanger carry, the text and accompanying photo gave me just enough to build on the concept, and little enough that I needed to figure some things out on my own. A little Googling revealed coat hanger carry isn’t totally unheard of, but also doesn’t seem to be widely known. Essentially, coat hanger carry allows you to modify a wire coat hanger for use as a minimalist “holster.”

Why would you ever want to do this? First, it is possible that a time will come when you have a revolver but lack a holster. Your holster might break or be lost. This method gives you a reasonably secure way to carry your revolver. You can improvise this method in the field for almost no cost. I probably wouldn’t use a coat hanger holster if a factory holster (even a sub-optimal model) was an option but again, I like knowing this technique is there.

Coat hanger carry allows for really deep carry. It allows you to get the gun fully below the belt line (if so desired) with nothing more than a tiny bit of wire exposed. This is a neat option for really deep concealment.

A more esoteric reason reason for coat hanger carry is more in line with the philosophy of Guerilla Gunfighter: Clandestine Carry Pistol by John Mosby. That is to say, it may be appropriate for carry in truly non-permissive environments where one may be required to  ditch the revolver. Having a holster attached to your belt would be a dead giveaway that you were, until recently, carrying a gun. It’s pretty unlikely that I’ll ever be in such a situation, but that doesn’t mean I don’t want to have the information. If you believe it’s impossible you’ll ever be in such a situation, check out my new podcast addiction, It Could Happen Here.

Coat hanger carry is pretty simple, and requires crafting a coat hanger holster. This requires cutting the hanger and building in two general features: a hook or loop to hold the gun, and hooks to attach the rig to your waistband. The revolver is trapped between the wearer’s pants and body. The coat hanger holster prevents it from sliding down in the pants, and somewhat prevents it from shifting side-to-side. There really isn’t much more to it than that. 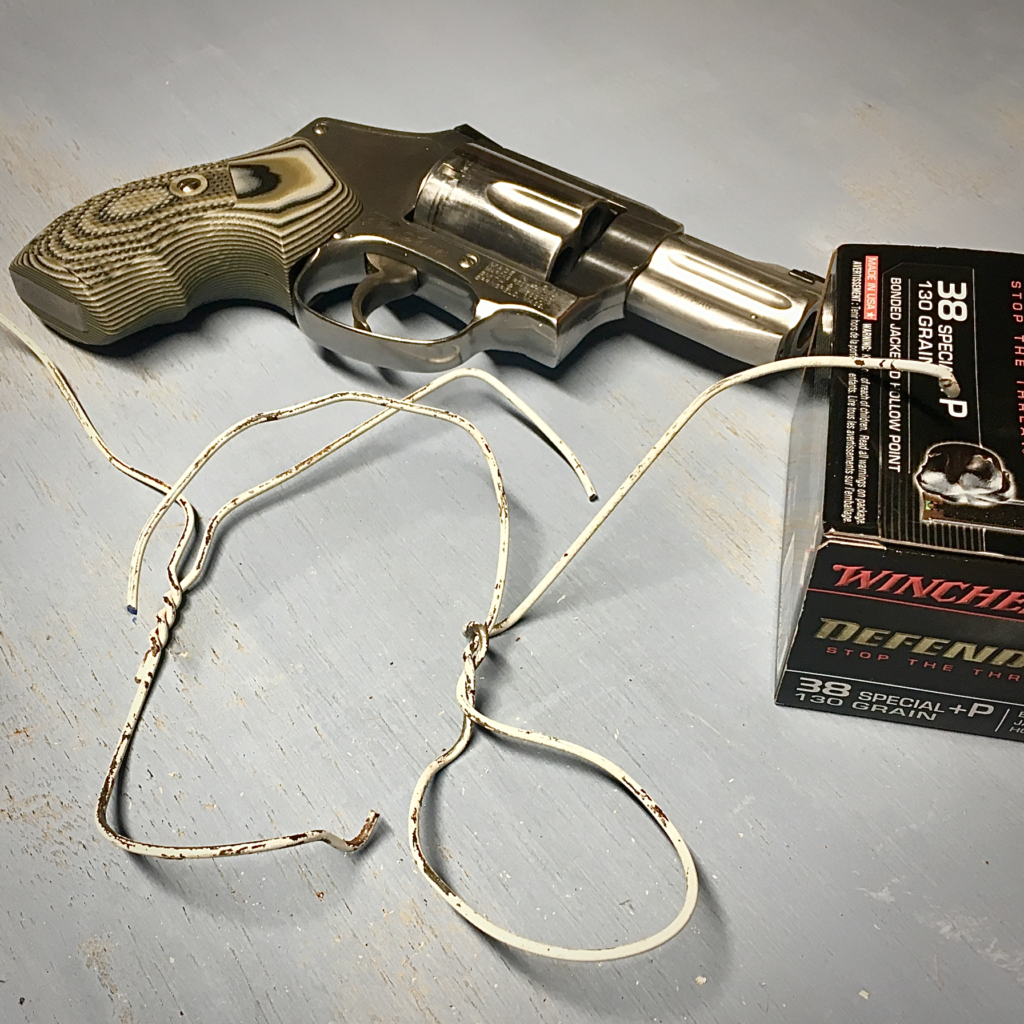 Snubby revolvers seem to be the best candidates for coat hanger carry. The narrow barrel fits well in the hook or loop to hold the gun up, and the frame provides a suitable ledge to prevent the gun from sliding further into the pants. Secondly – and more importantly – the double-action trigger of a revolver provides a comfortable safety margin. Obviously a coat hanger holster does not cover the gun’s trigger, so this is definitely not recommended for single-action or striker-fired handguns.

I had to try this carry method for myself. In keeping with the spirit of the thing, I wanted to do this in an improvised fashion, so I limited tools and materials. I began with a wire coat hanger that I found. It turns out that among my entire household effects, I didn’t have a single wire coat hanger. But I found one, hanging from a pipe behind my water heater, covered in cobwebs. Perfect! 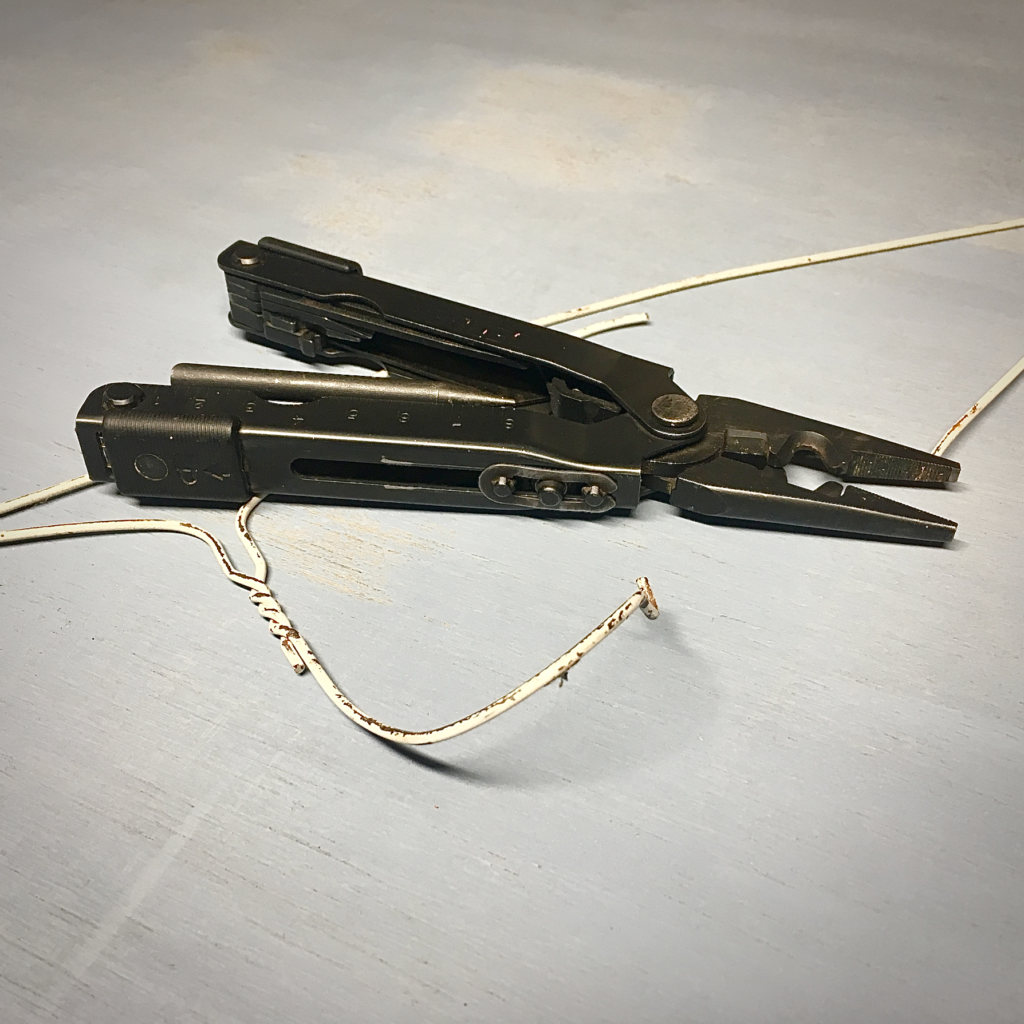 Next, I definitely needed some tools but wanted to keep them to a bare minimum. All I allowed myself was a Gerber multi-tool. Using more tools would have made the process easier and probably would have resulted in a better final product, but I was still able to produce two working coat hanger holsters. I’m not going to provide a step-by-step guide. Your best results will come from trial and error rather than following any attempt I could provide at instructions. However, here are the basics and some lessons I learned along the way.

First, you need to construct the “hook” to hold the gun up. On my first attempt, I used the natural hook that was designed into the hanger. This worked OK, but as I discovered later, it is weaker than building in your own hook from the middle of the wire. As soon as you cut the hanger, the only thing holding the two pieces of your coat hanger holster together is the twist in the wire. A little tape could be used for reinforcement, but I’d still prefer to make my own loop. By making your own loop, your coat hanger holster is as single piece of wire. 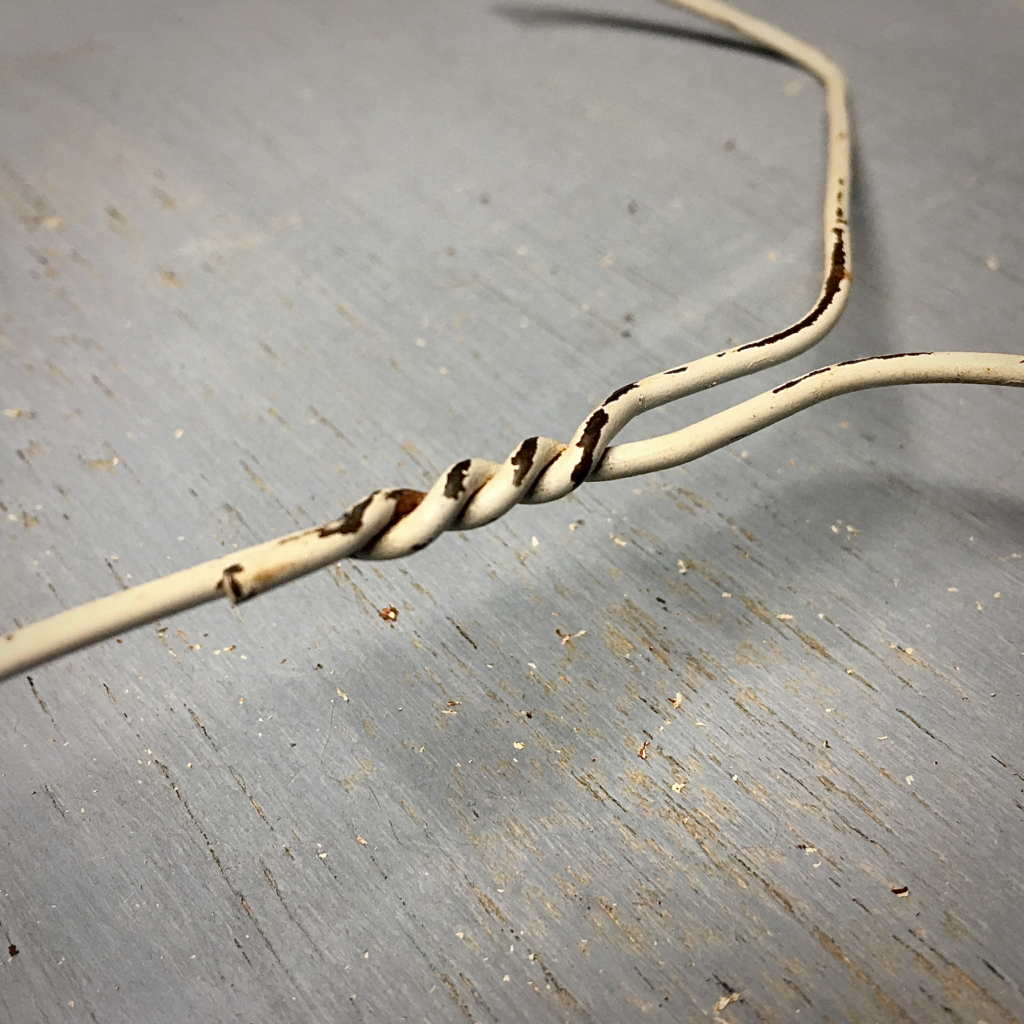 Second: measure twice, cut once. On my first go, I cut the “tails” too short. I was still able to make it work, but it would have been easier to start with too much material. On my second attempt I followed my own advice and started with more material. This let me get (mostly) correct bends, find a good fit, then cut.

My second go was not perfect, but still pretty decent. I created a full loop from straight, bottom portion of the hanger. It turned out a bit too big, encompassing the whole frame, resulting the gun being held up by the trigger guard but it still works. I bent the tails into two much longer hooks which I slip over the waistband of my pants, but behind my belt.

The third lesson learned is that the vertical stretches of wire coming up from the barrel hook/loop need to be on one side or other of the cylinder. The preferable position is along the frame under the cylinder. This provides some horizontal support for the gun – another reason this is pretty much a revolvers-only technique. 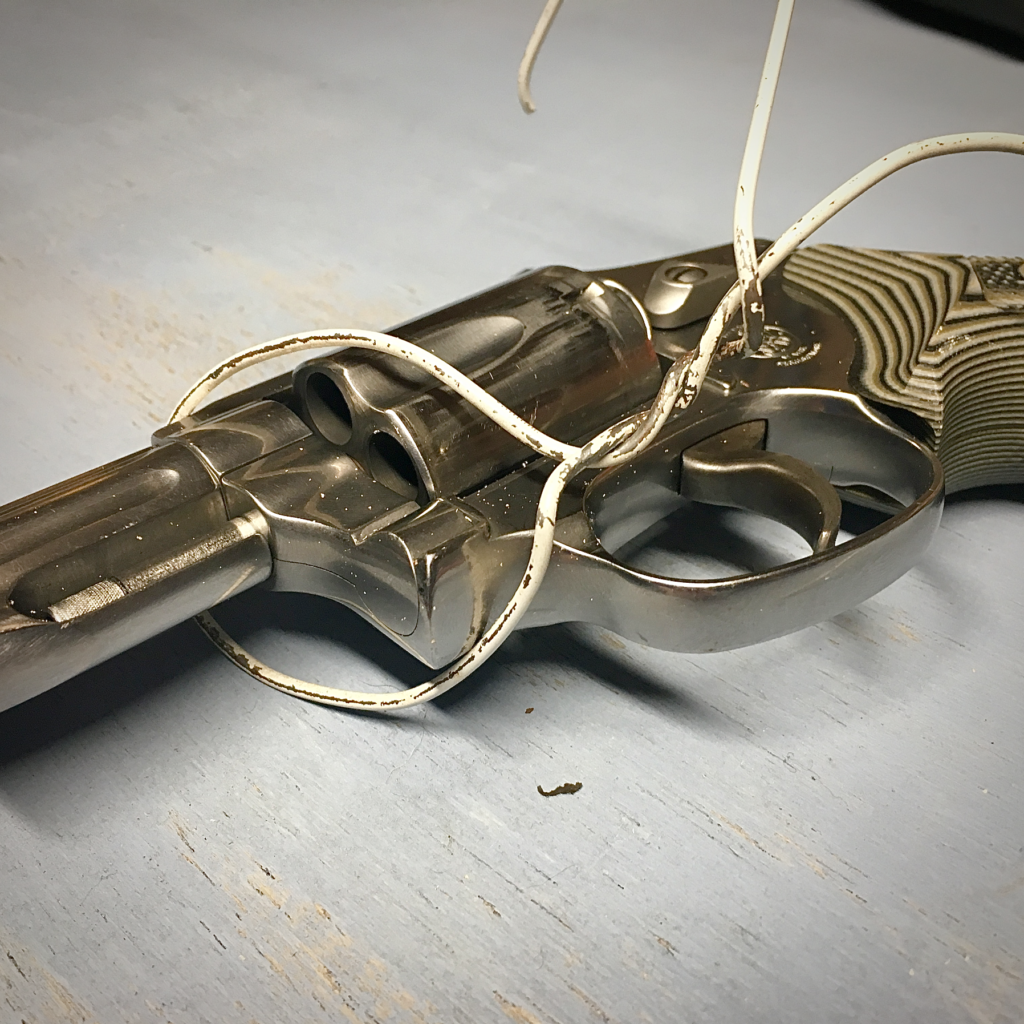 I actually used my coat hanger holster a little, to see how it work and offer what suggestions I can. I carried it around the house a bit, and finally got brave enough to wear it to the grocery store. I still had my 1911 in a OWB holster because…we’ll discuss the draw stroke soon. Here are my thoughts.

Coat hanger carry is made for AIWB. This felt soon good in the appendix position I didn’t even bother trying it on the strong side. Next, holstering isn’t exactly “holstering.” Holstering is getting the wire fitted correctly to the gun, then getting the whole apparatus in place on your body without pinching yourself, or poking yourself with sharp wire. If you draw the revolver and suddenly need your hands free, you need to be prepared to shove it in a pocket. It’s simply not going back in the coat hanger holster quickly or with one hand. 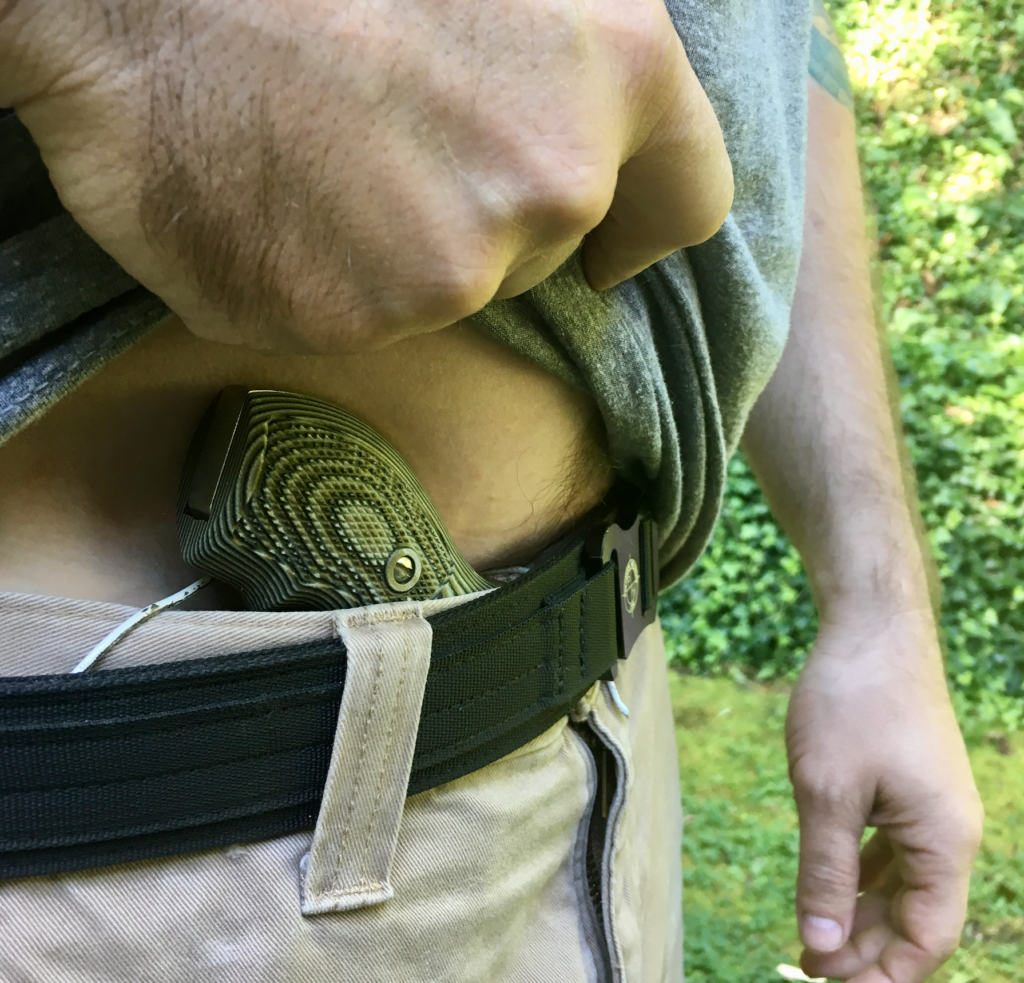 The draw stroke with coat hanger carry is slow, but that could be because of my design. The coat hanger holster I used (my second one) got the gun deep into the waistband. This made it hard to acquire a full firing grip. In the future I would definitely try to modify this to raise the gun up a bit, unless I really needed deep concealment. 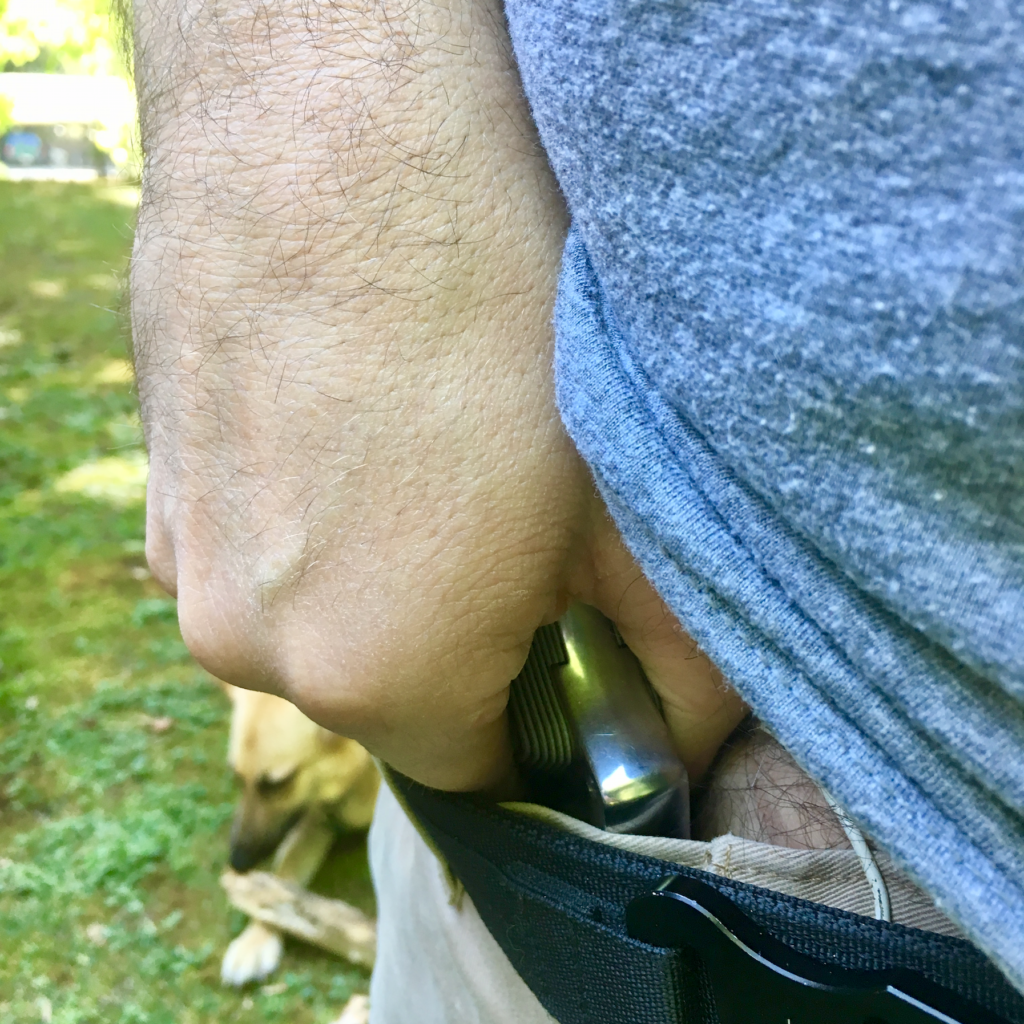 This technique did conceal the gun as well as any store-bought holster I own, and better than some. The thing I was most surprised with: it held the gun in place. It kept the gun in the same spot through multiple repetitions of sitting and standing, and walking around. I wouldn’t want to be involved in a foot chase or a grappling match with this holster, but for day-to-day stuff it works surprisingly well.

Finally, be prepared for some scratches on your gun if you use this technique. Don’t practice on your mint condition, blued 2.5″ Python. I used my 640 Pro which has been thoroughly beaten up, so I wasn’t worried about it. Since this is a last-ditch, improvised technique, you probably won’t care much either if you have to coat hanger carry.

I’m not going to be dumping all my holsters in favor of coat hanger carry. In fact, we don’t recommend coat hanger carry at all unless you find yourself in a true emergency and have to resort to this method. Although it is doubtful I will ever need or use coat hanger carry, I like to know about techniques like this. It’s better to have the knowledge and not need it than the other way around.

Hat tip to Skillset Magazine! If you haven’t checked it out, you should. It’s not a gun magazine, it’s an “Alpha lifestyle” magazine so the content is somewhat varied. Most of it should appeal to RevolverGuys, though. Although I have no personal interest in the sales of Skillset I have written there, back in the Spring 2019 issue. If you run across it, pick it up!

Did you Get something Out of this post? Support RevolverGuy on Patreon!