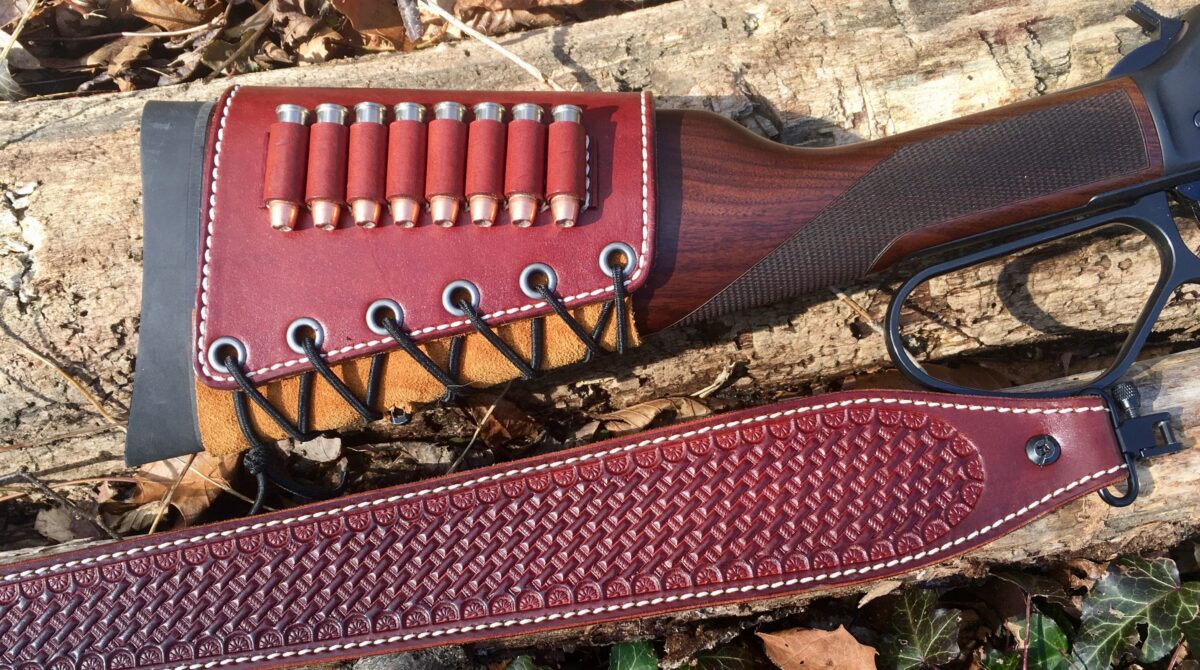 Long before I began my reviews (Part I, Part II) of the Henry .357 Magnum Carbine, a frequent reader here sent me a photo of his Wiley Clapp GP100 and levergun combo. I was as intrigued by his choice of accessories as I was the guns; the rifle had a beautiful leather butt-cuff with eight loaded cartridge loops. That led me to Diamond D Custom Leather of Wasilla, AK.

I reached out to Diamond D to request both a butt cuff and a rifle sling for the Henry Big Boy Steel. My email was almost immediately returned, and after a very pleasant conversation Diamond D agreed to support my request. When both items arrived in the mail I was simply blown away. Upon opening the package I was hit in the face with the unmistakable aroma of leather.

The butt cuff is constructed out of three pieces of leather. The first, smooth exterior piece is vegetable-tanned cowhide. It is beautifully polished and lacks a single imperfection that I could note. This rigid piece provides the foundation of the cuff. A second piece of leather lines the smooth outer portion. This rough, flexible flap extends beyond the port-side margin, allowing it to wrap around the underside of the stock with enough for a little overlap. This rough side both protects the finish of the stock, and prevents the cuff from slipping. Additionally, it provides a very pleasing two-tone, light/dark look that I am quite fond of. 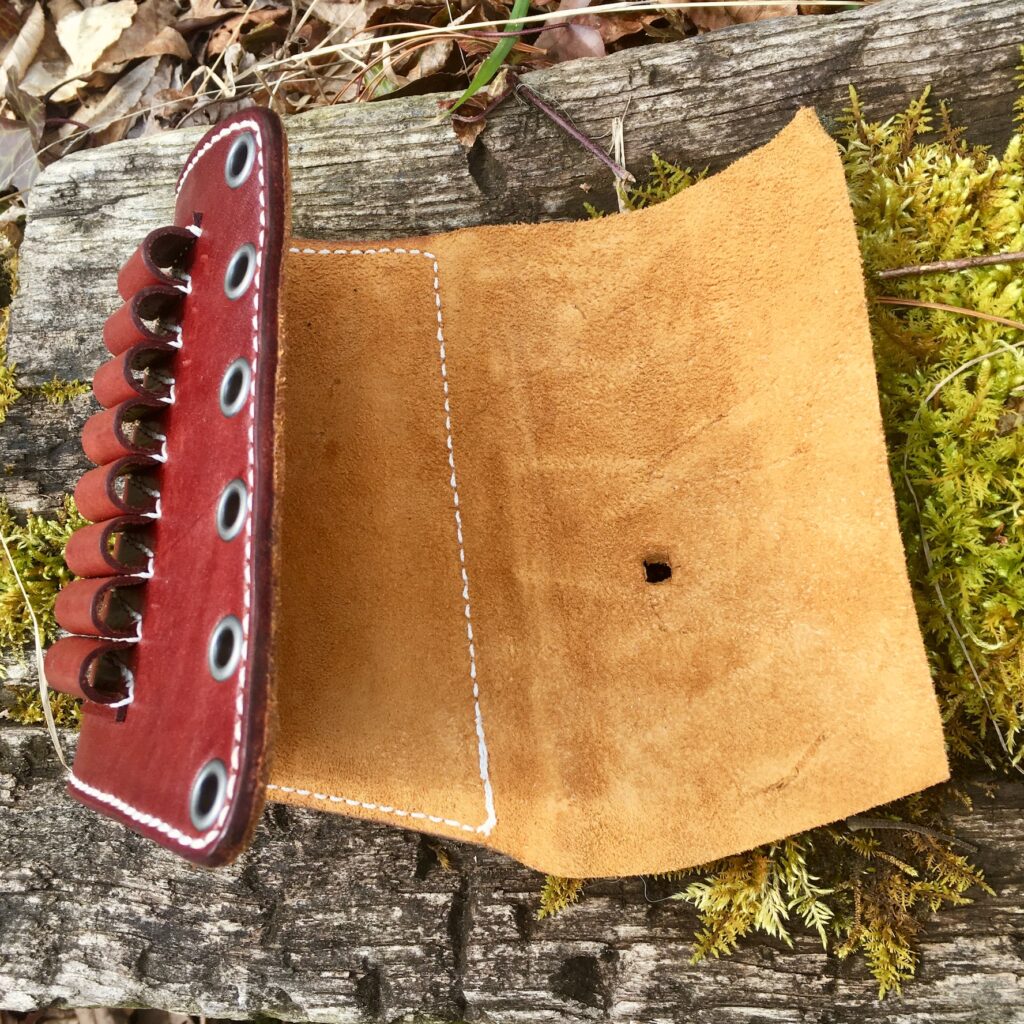 The cuff is held on by a cord that is threaded through six expertly-placed eyelets on each side. The cord criss-crosses under the bottom of the butt, but doesn’t wear on it thanks to the protective layer of rough, soft leather. Initially I kind of looked askance at the black elastic; surely a rawhide thong or waxed sinew would be more suitable for such a handsome piece? I quickly found out why the elastic is preferable to an organic material – it’s simply not coming off. It took me a lot of work to get that cord off for so I could take photos for this review. And of course it won’t degrade nearly as quickly as a natural material. 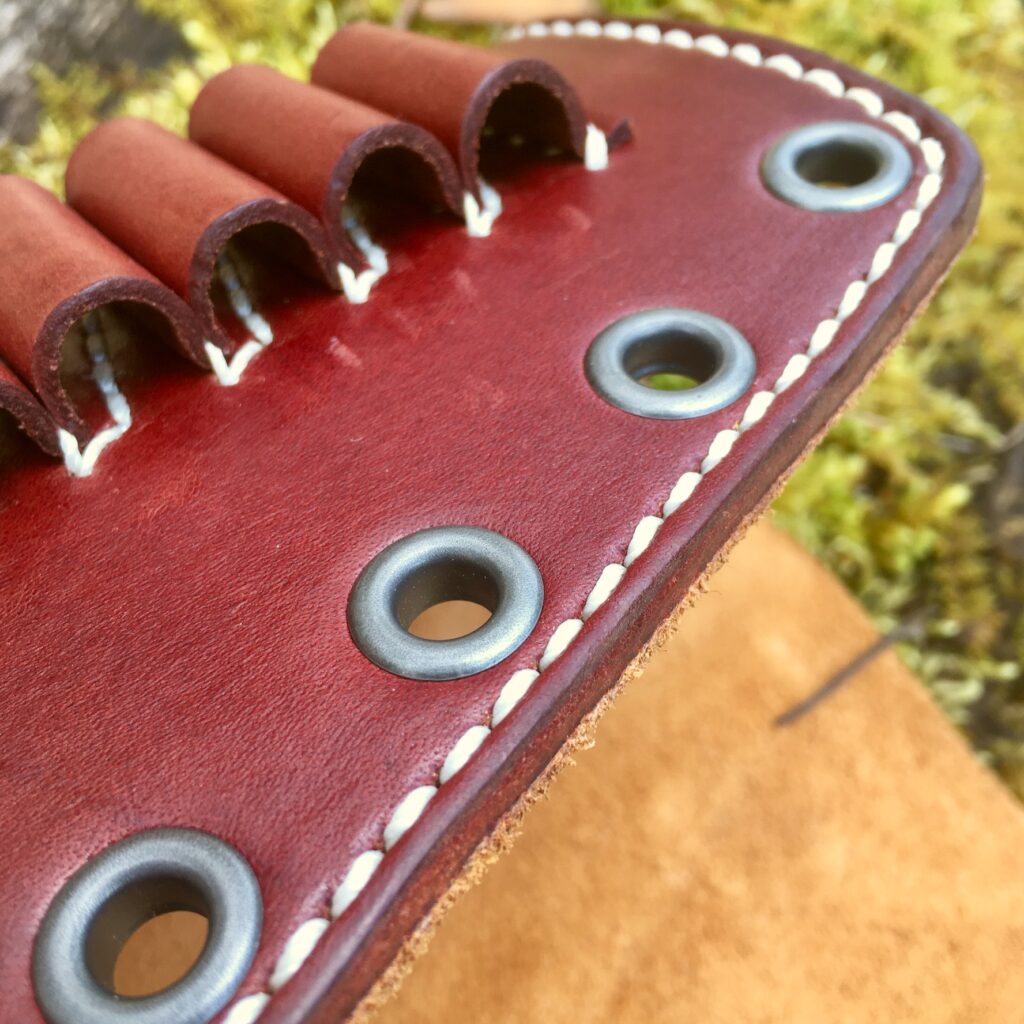 The third piece of leather forms the eight cartridge loops (or six for most rifle cartridges, five for shotguns). The loops are rigid and perfectly sized. I kept these loops loaded for the entirety of the three months I’ve had the cuff and have yet to see them loosen. The loops are held on via the same sharp-looking nylon thread that borders the edges of the cuff. The cuff is available for rifle cartridges from .223 to some belted Magnums like .338 WinMag and .375 H&H. Of course revolver cartridges are also well represented: .38/.357, .44, .45/.454/.460, and .500. 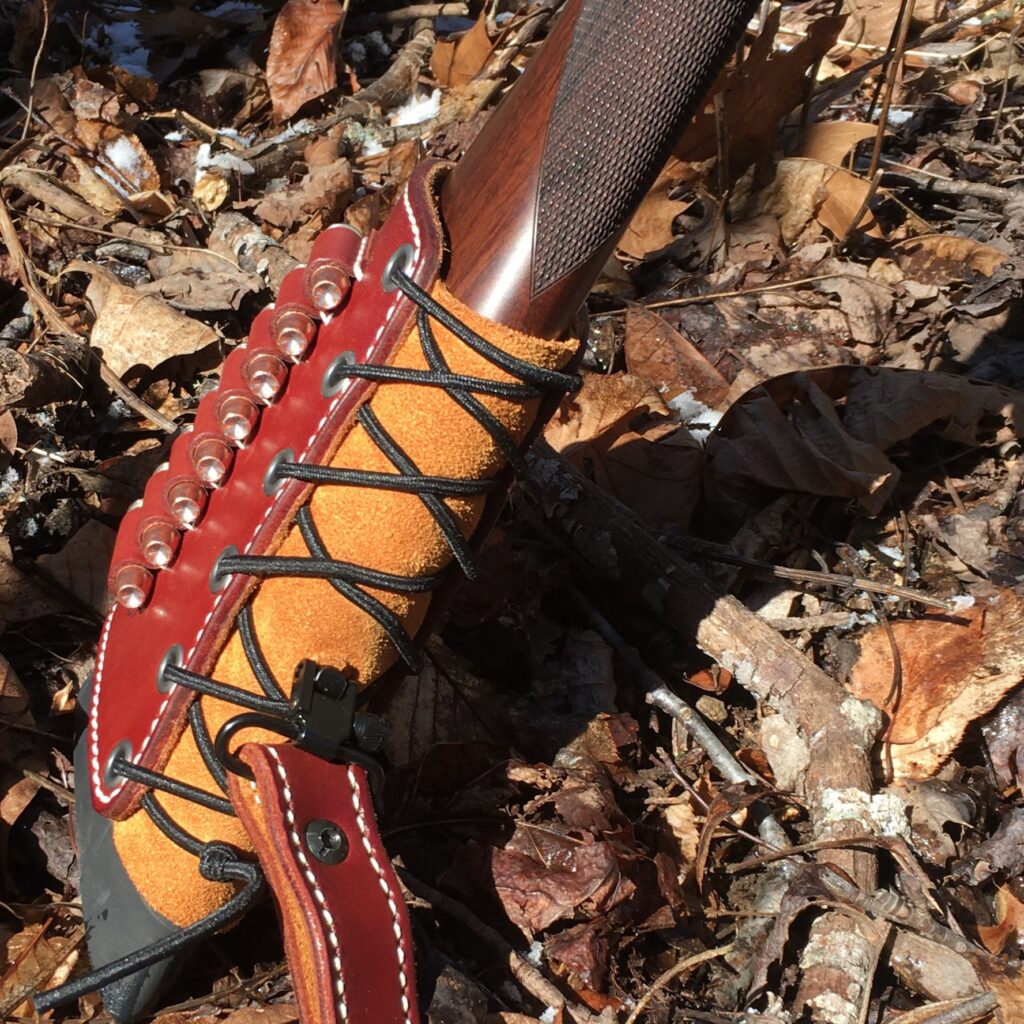 I did find that I had to cut a hole in the inner, suede layer of leather accommodate the sling swivel stud. I simply cut a “X” and made sure to make it a bit smaller than the stud. This worked very well, both functionally and aesthetically. Even though I was hesitant to alter such a beautiful piece of leather I am quite pleased with the result. Had I no desire to use a sling on the little Henry I might’ve removed the stud and preserved the integrity of the butt cuff. Again, though, the end result isn’t displeasing and – I imagine – serves to anchor the butt cuff in place. 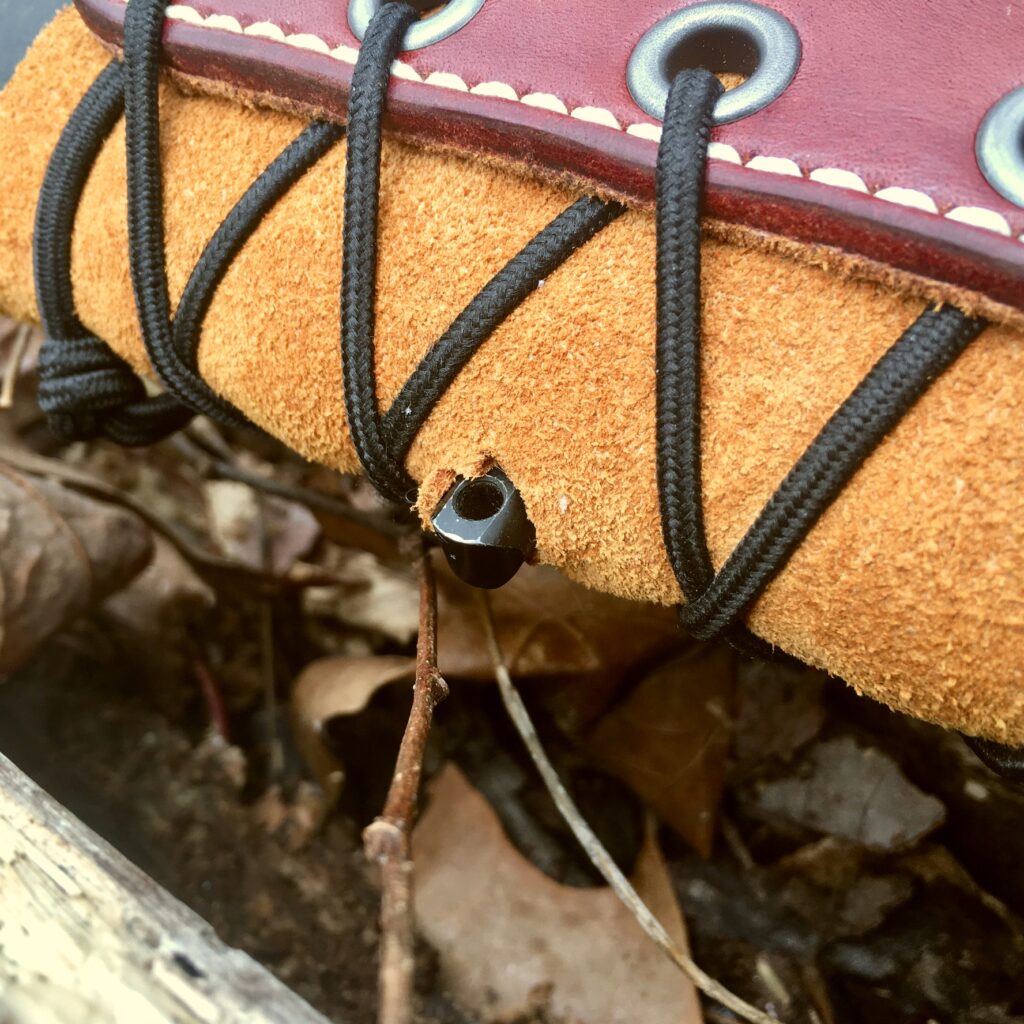 I found that I very much liked having the butt cuff on the rifle. At any time I could pick up the svelte little levergun and know with nothing more than a quick glance that I have at least eight rounds on board.  The forward margin of the cuff also serves as an index for consistent cheek weld. I found that aligning the leading edge of the cuff with the corner of my mouth to provide near ideal eye relief. 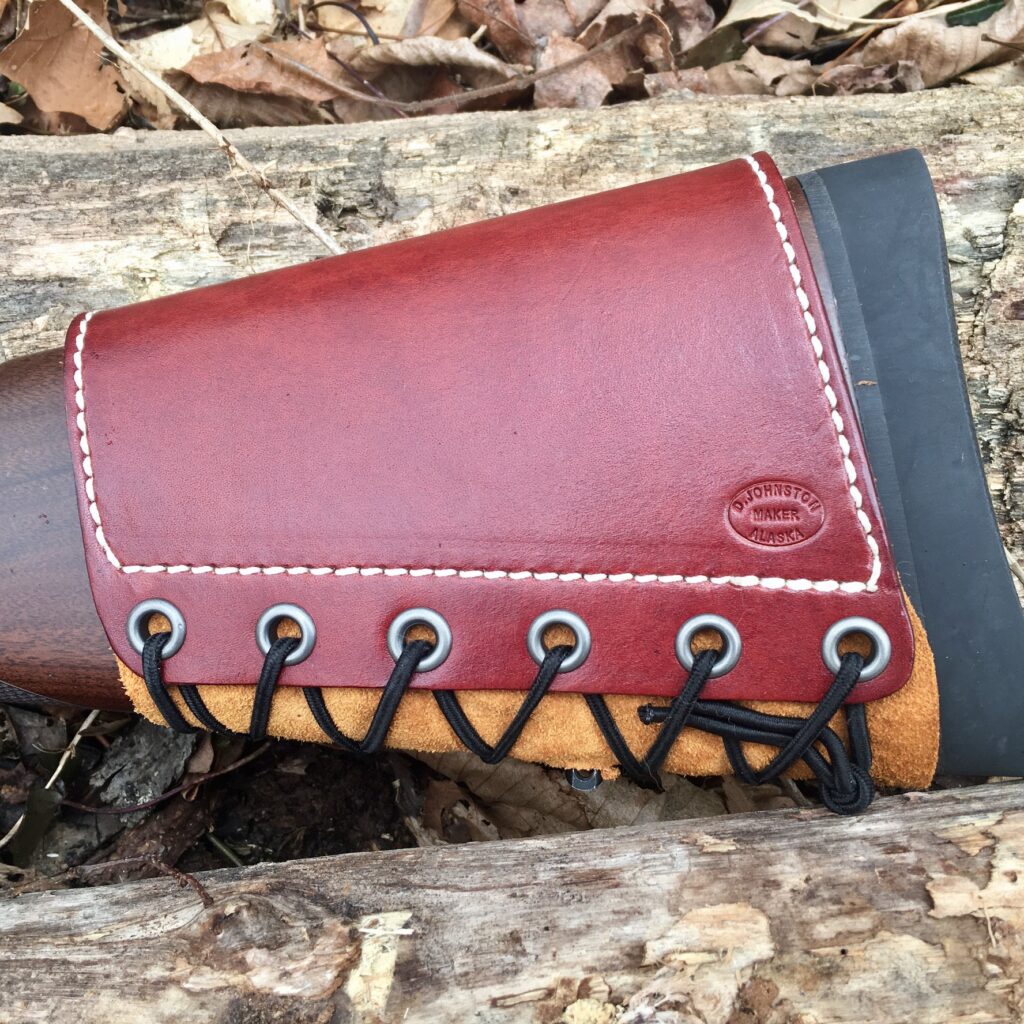 I found that while I preferred the appearance of rounds seated well into the cartridge loops, they’re easier to retrieve if not fully seated. If traveling over rough terrain this might not be ideal; in fact, I may choose to seat cartridges as deeply as possible in the loops. While imagining such travel is entertaining it’s very unlikely for me, so I tend to err on the side of accessibility. 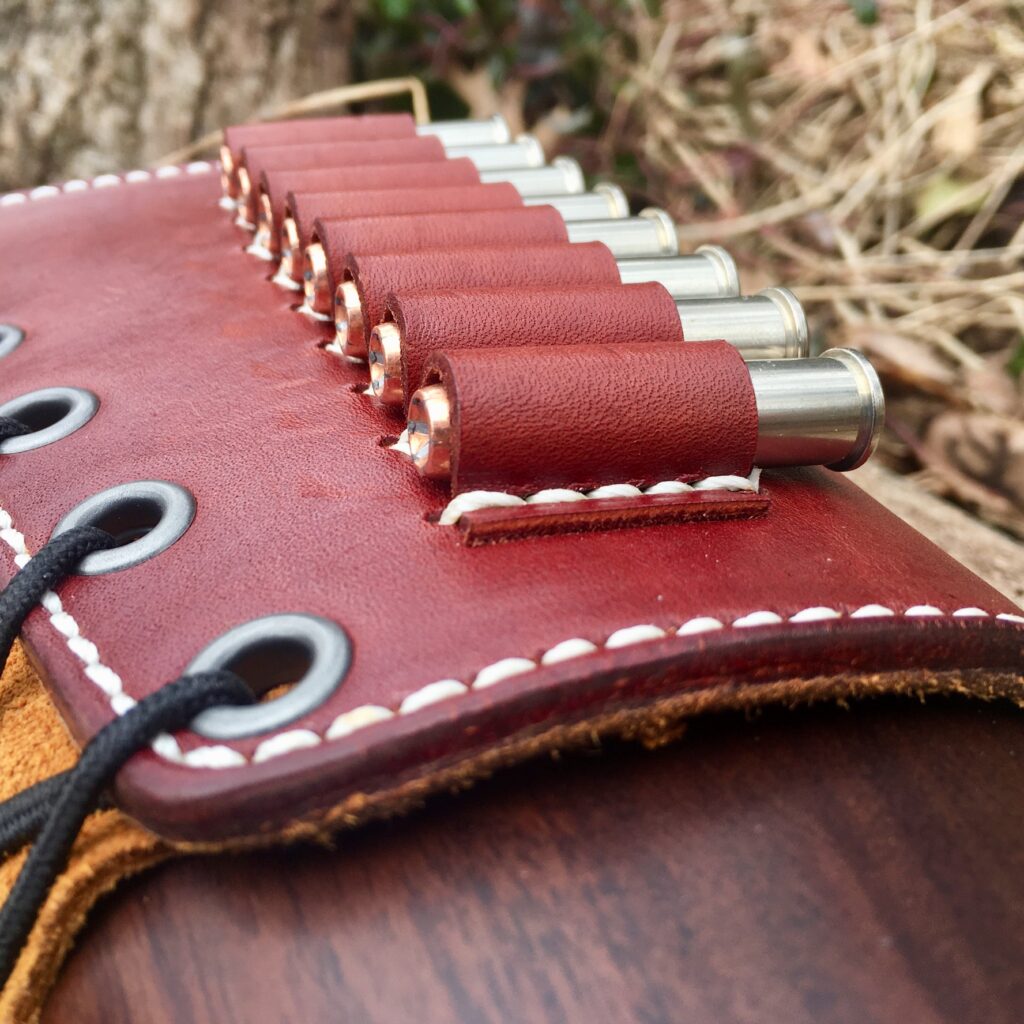 The butt cuff and eight rounds of .357 Magnum ammunition do alter the balance of the Henry. With a loaded magazine tube, the balance is still slightly to the rear of center of the receiver. With my hand cupping the gun firmly against the trigger guard it still hinges just slightly toward the rear. I didn’t find this to be that difficult to deal with, but if you’re wed to the balance of your carbine you may want to be aware of this.

Now let’s talk about the sling. I haven’t owned a traditional rifle sling in a very, very long time. Since joining the military my experience with slings has been sharply skewed toward either military web slings or the new breed of single- and two-point slings (à la the VTAC sling). Neither of those were appropriate for the Henry carbine. The Diamond D Leather sling is, and – like the butt cuff – is a thing of beauty. 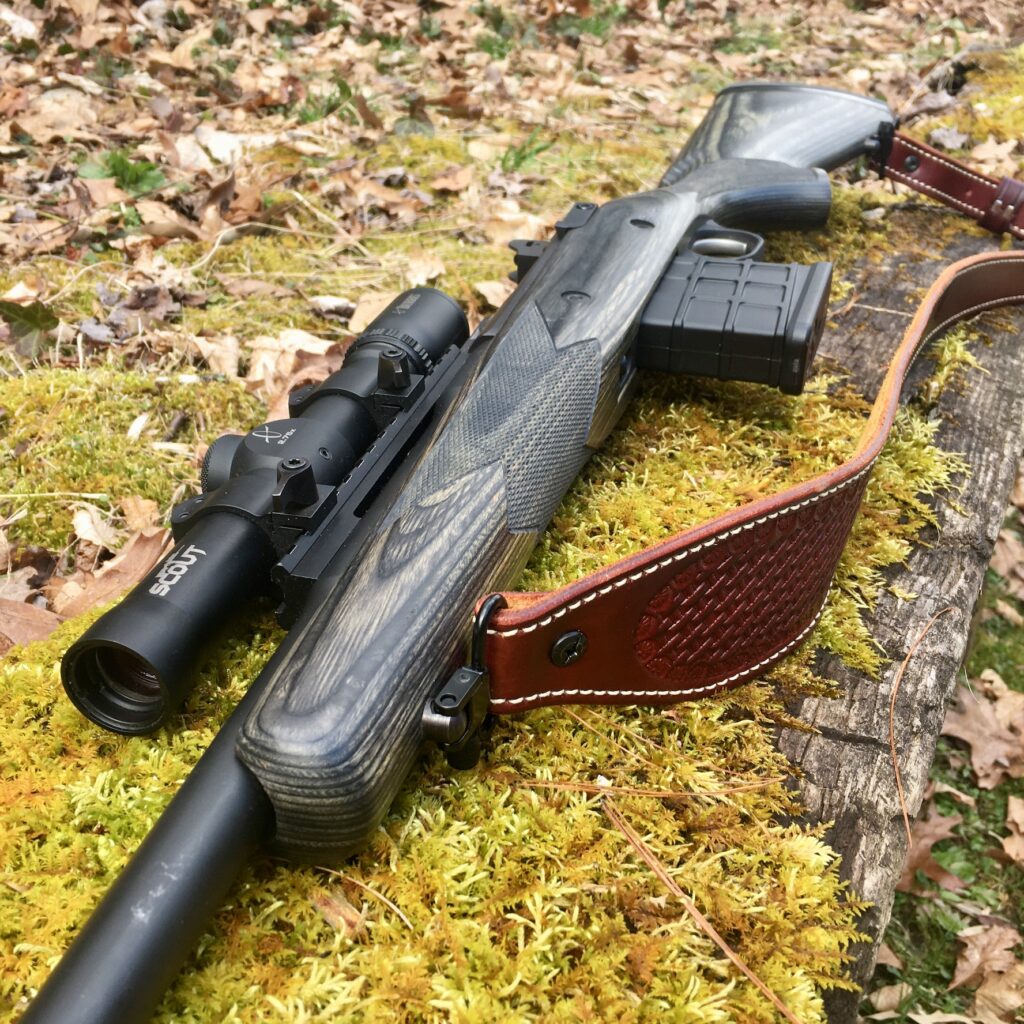 Also like the butt cuff, the sling is made from two layers of leather. The top, outer layer is vegetable tanned and polished cowhide. The version that was sent to me has a beautiful basket-weave stamping. A plain version is available, as is a version with a concho-style stamping around the border. 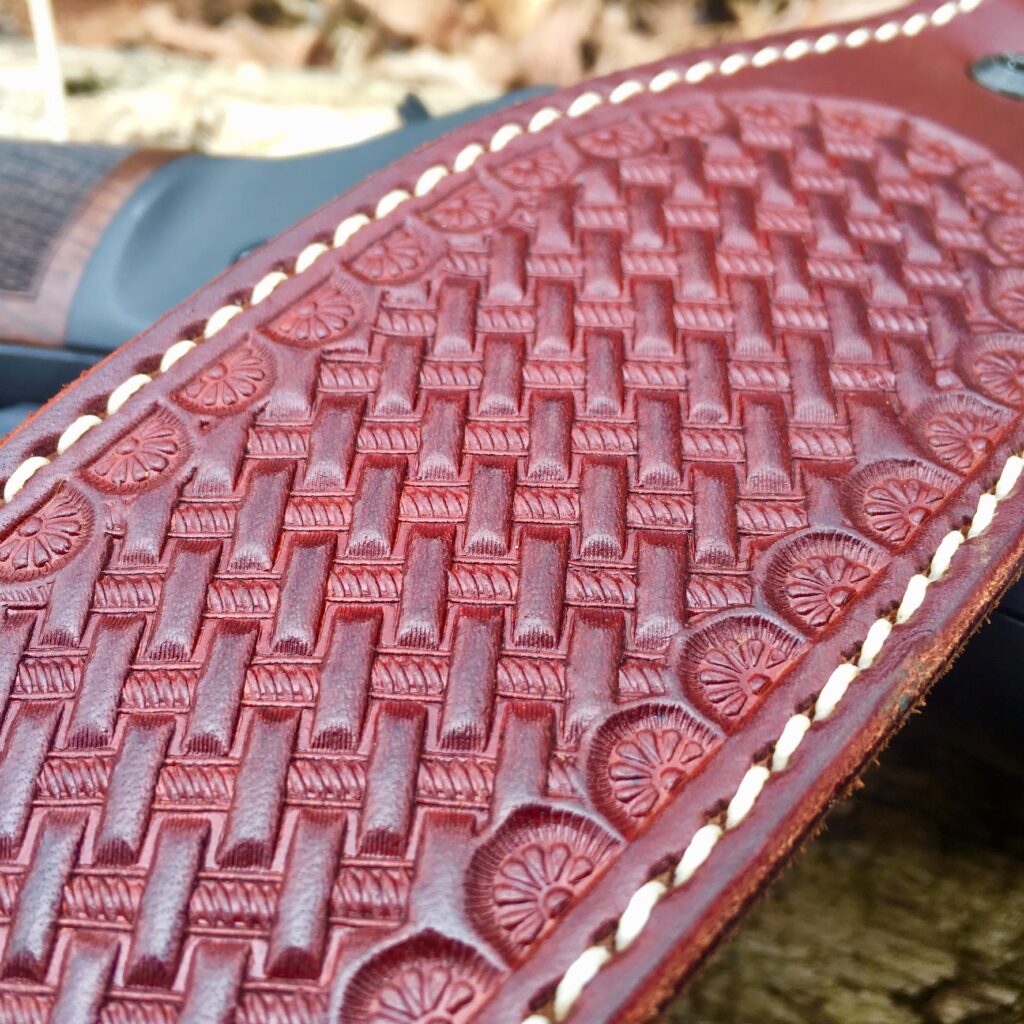 The inner layer is the rougher suede, and both layers are held together with the same, attractive white thread. The contrast between the glass-smooth front and the soft, suede back is really something. The suede interior does an excellent job at keeping the rifle on your shoulder. I tried this out with just about every outer garment I could imagine one wearing, and the rifle stayed steadfastly put. A padded version of the sling is also available, but the plain, flat version suits me. 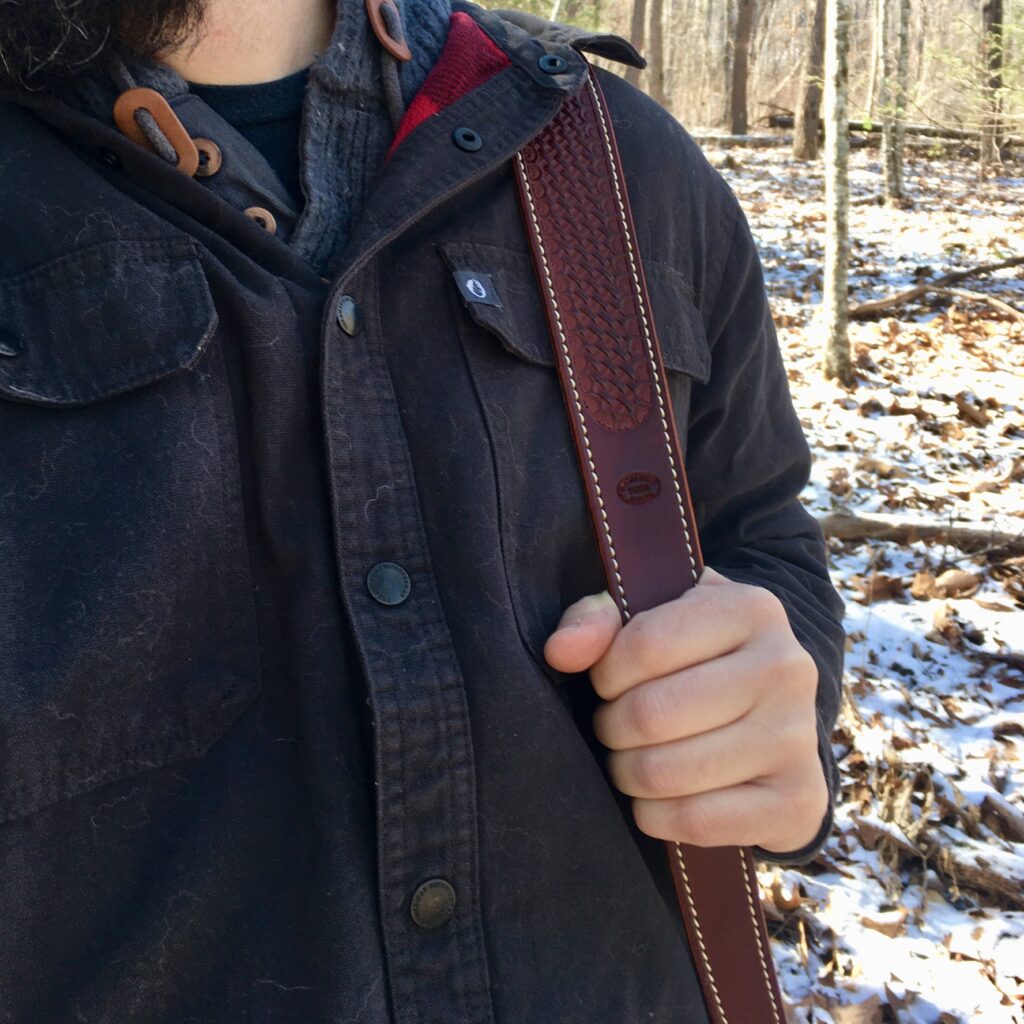 The ends of the sling are held together with Chicago screws. Length is adjustable from the bottom end of the sling. I found that the standard length worked just fine on both the Henry and the appreciably larger (though not much longer) Ruger Gunsite Scout pictured above. 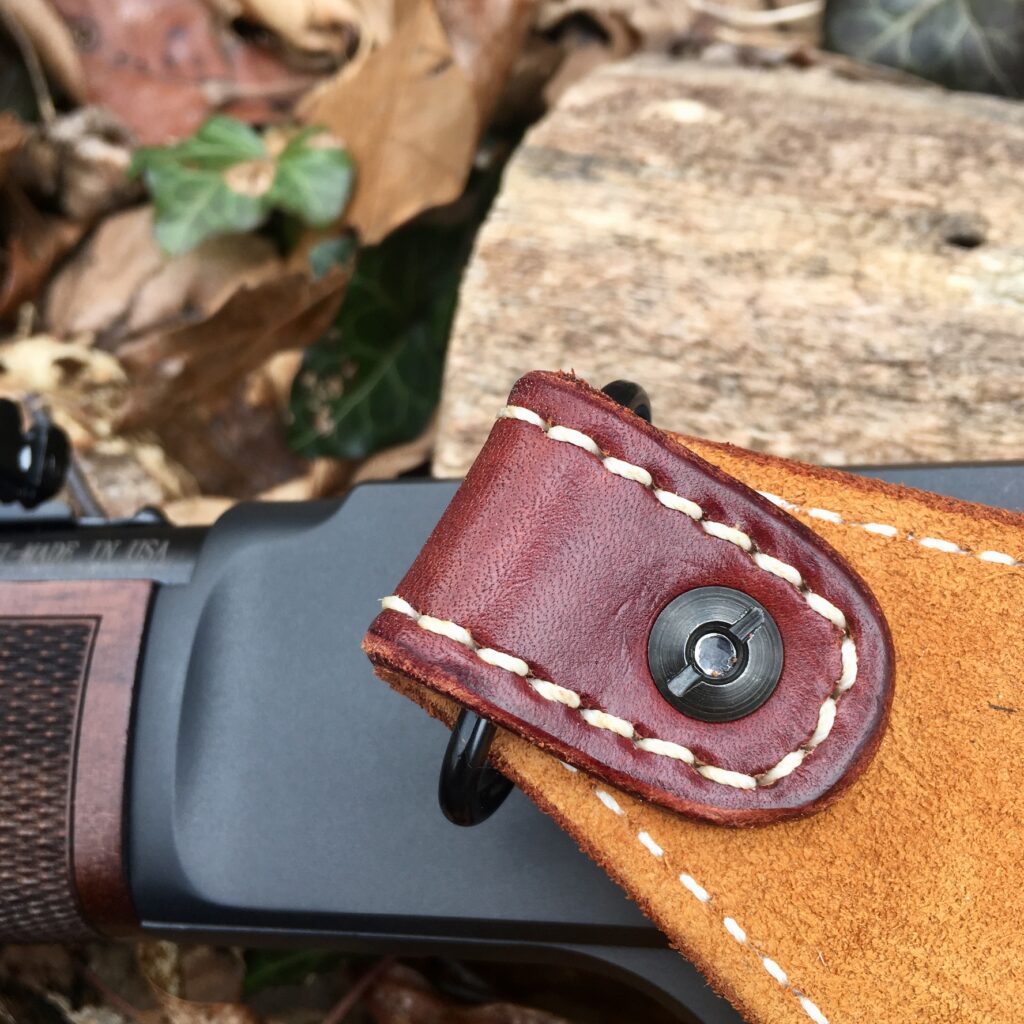 Diamond D Custom Leather makes a lot more leather goods, too. They make belts, magazine and ammo pouches, rifle scabbards, dog collars and leashes – of course – holsters. Diamond D is the maker of the famous “Guide’s Choice” chest holster, a distinction they are quite proud of.

Neither Diamond D’s butt cuff nor rifle sling are inexpensive items. The Butt Cuff sells for $95.00, and the sling starts at $55. Both, however, are absolutely beautiful. Both are obviously the work of a craftsman who takes great pride in his work. And both function perfectly. I have no doubt that both will continue to function for quite some time (if they don’t I’ll let you guys know). I would happily recommend either of these products without hesitation.