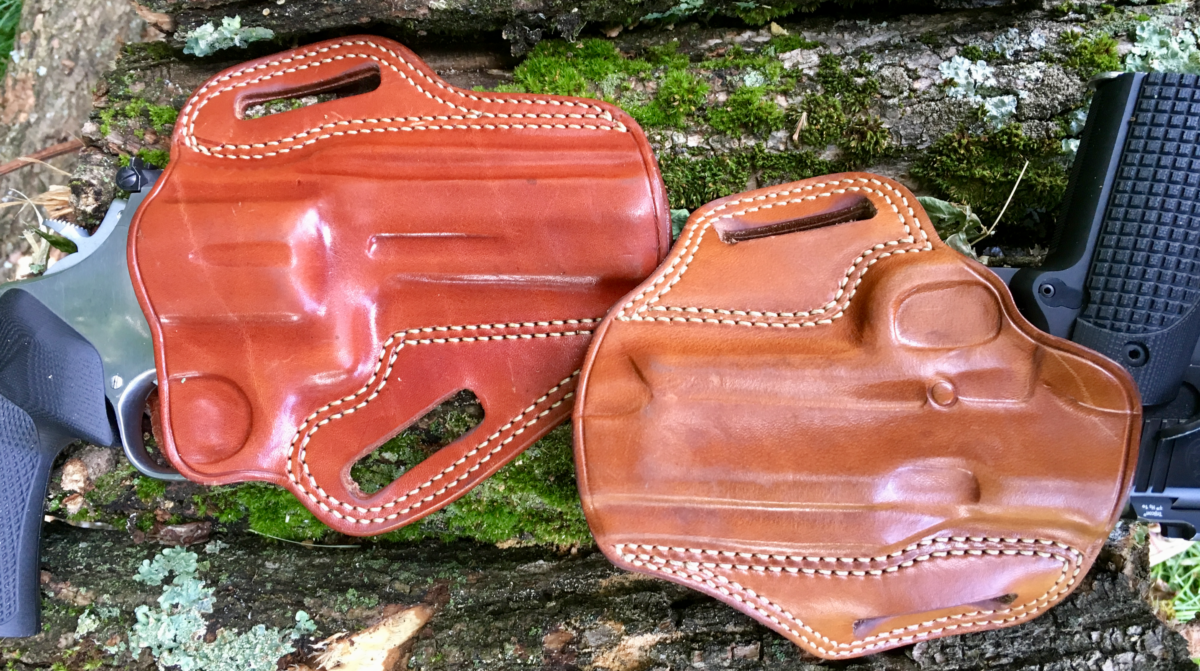 I have been carrying appendix for about three years now and you can put me down firmly in the “appendix guy” category. It’s OK if you’re not – I’m just letting you know where I stand. As much as I like it, though, carrying appendix isn’t always possible. Appendix can get quite uncomfortable if you have to hold a certain position for long periods of time, and some types of dress and activity don’t support the method.

I do a lot of travel for work. Sometimes I have to fly across the country, but most of my work is within a day’s drive of where I live. Between March, April, and May of this year I had to spend no fewer than fourteen days driving at least six hours. After about 90 minutes of working the gas and clutch in my car (yep, I still demand a manual gearbox) my holster begins digging into my thigh and my enthusiasm for appendix carry begins to wane. Those are not “appendix days” in my book.

Sadly, during the month of April I also had to attend the funeral of a former teammate. Normally I’m not what you’d call a fancy dresser. Carhartt khakis and a shirt (tee, or chambray button down, untucked) is about as fancy as I get. Certain occasions require dressing to the occasion and may preclude appendix carry, as was the case on this day. 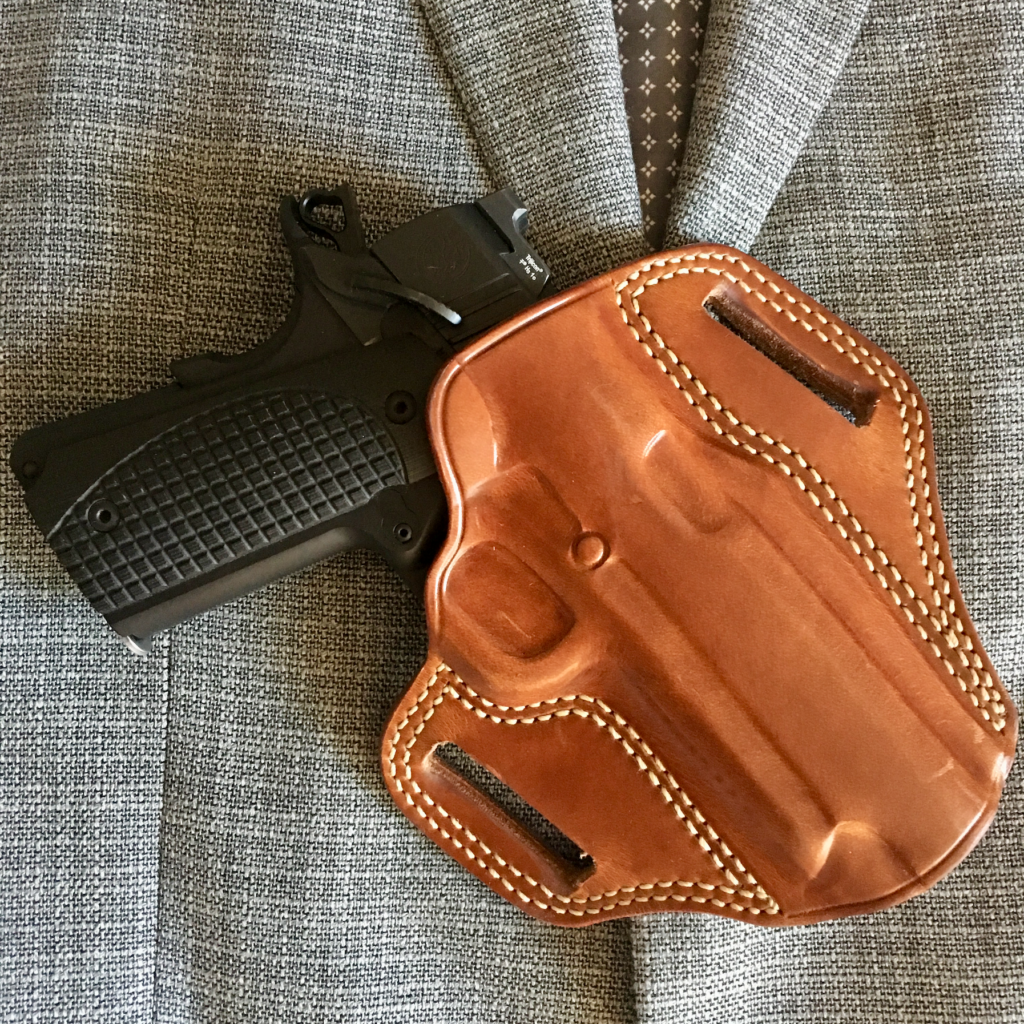 Finally, and as you guys know, I recently moved. The nuts and bolts of moving – packing and unpacking a truck, putting furniture together, climbing up and down stairs over and over – would have probably rendered appendix carry painful. Had it been my only option, I would have probably had my gun off more than on during these days. The convergence of all these factors has seen me carrying strongside OWB a lot more lately.

Wanting to avoid the trial-and-error often involved with selecting a new holster I decided to go with something I knew. The first holster I ever purchased for my 686 was the Galco Combat Master. That holster is nearing 10 years old, so I asked Galco to provide a Combat Master for the M1911 to get a comparison of current vs. older manufacturing. 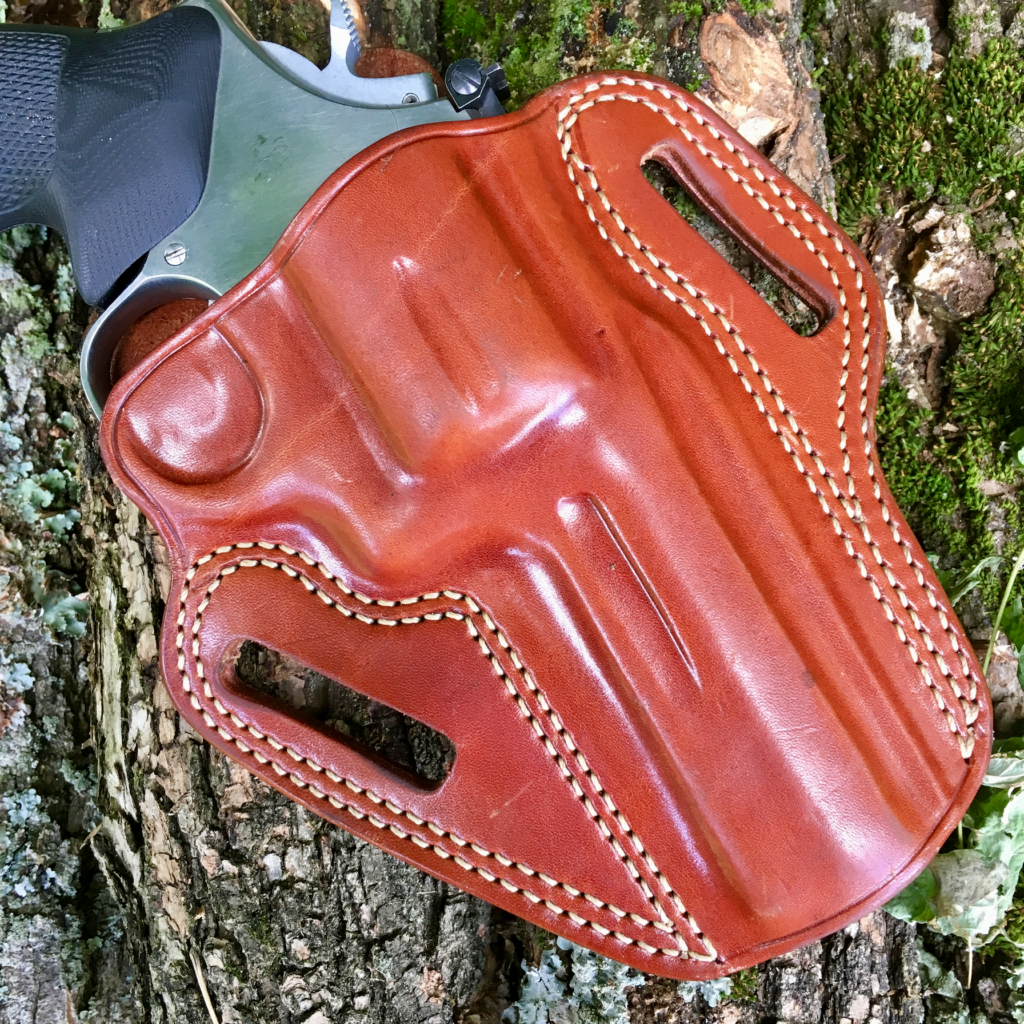 The Galco Combat Master is a two-slot, open-top, pancake design sporting a FBI cant. It is made from premium steer hide, and seems are double-stitched with rot-resistant nylon thread. The Combat Master is one of the most finely boned holsters I’ve worked with. Most 686 holsters work just fine with the Ruger GP100, but not this one. The 686 has an extremely close fit and will not accept my 10mm GP100. 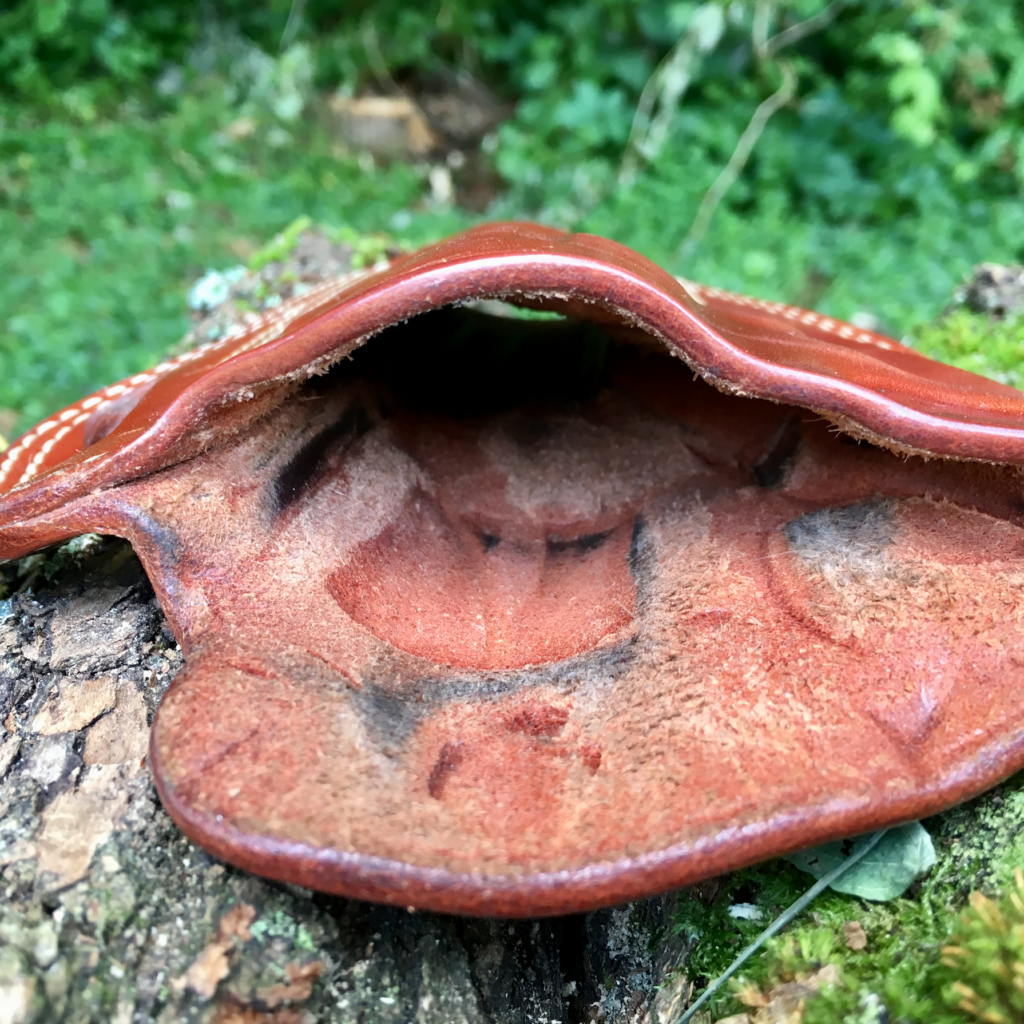 Regular readers here will recognize the Combat Master from some of the earlier articles on this blog. I have carried my L-frame concealed only sparingly, and only under winter clothing. I have run the holster considerable on the range and in classes, and have nothing but good things to say. The open-top design is fast and the holster is comfortable for all-day wear.

I have spent considerable time with the 1911 under concealment in the Combat Master. The old pancake design still works concealment wonders if worn tightly to the body as intended. I found that the 1911/Combat Master didn’t conceal all that well under my usual dress – Carhartt khakis and a tee. This isn’t a huge knock on the rig because most of my tee shirts are a bit on the form-fitted side, but appendix carry will do the trick for me in my normal dress. The Combat Master worked admirably under bulkier clothing, however.

At this point I have to relay a slightly embarrassing anecdote. On one of my work trips I forgot my appendix holster. I had planned to wear the Combat Master during the drive, and switch to appendix when I arrived, five hours later.  This meant that I had to spend a week teaching in the Combat Master in front of 20 students – a pretty good test of a concealment holster. Fortunately, I always wear an untucked button-down when teaching, and in five full, eight-hour days, only one student noticed me carrying (at least as far as I know).  He was a gun guy and wanted to know what I was packing. All he noticed was the holster protruding below the hem of my shirt.

The first is the sight channel, which I feel could be a bit more generous. When sharp metal surfaces interact with leather, there is always the risk of some leather being shaved off. On probably one draw out of every 25 with the Combat Master, some leather made its way onto my front sight with the 1911. Though not a show-stopper this did present a distraction on target. This happens far less frequently with the 686, but probably owes more to the rounded design of the revolver’s sight.

The next complaint – again with the 1911 version – is the holster mouth. The 1911 is a fairly flat gun, and holsters for the 1911 are fairly flat. When tensioned by the belt, the non-reinforced holster mouth sometimes flattened itself out a bit. Never so much so that two hands were required to holster, but sometimes it did take a bit more work than I felt was ideal.

Finally, one issue that has caused me to switch to carrying a revolver during more strenuous household chores is the propensity for my 1911’s thumb safety to get bumped off. In fairness, I have been putting in several hundred feet of fence, building a chicken coop, gardening, turning compost, cutting and stacking firewood, and a ton of other manual labor chores. I find it unnerving to reach down in the middle of one of these chores to find the thumb safety disengaged. This is a total non-issue with a revolver, but if this factor is applicable to you it’s worth knowing about.

If you prefer strongside OWB, the Galco Combat Master is definitely worthy of your consideration. The 686 version of the Combat Master has served me very well for almost a decade, and I have no plans to replace it. The 1911 version I recently received leaves a bit to be desired, but is certainly a serviceable holster. I’ll continue to carry with it when circumstances dictate strongside OWB carry, at least for the time being. 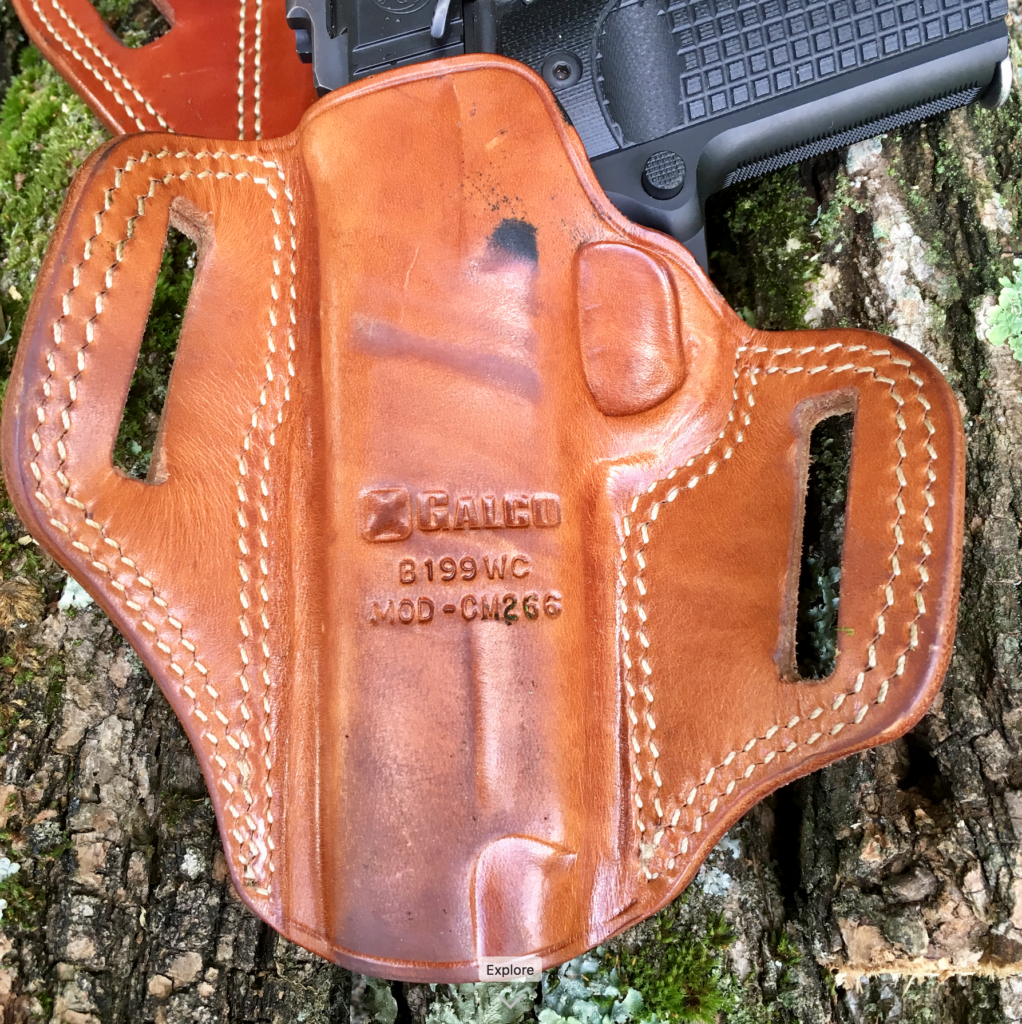 The Galco Combat Master is made for just about every gun under the sun including revolvers from Charter Arms, Chiappa, Colt, Kimber, Ruger, S&W, and Taurus, and is available in black or tan. The listed price for the Combat Master is $97.00, but prices on Amazon generally run a little cheaper – from $70 to $85 or so.