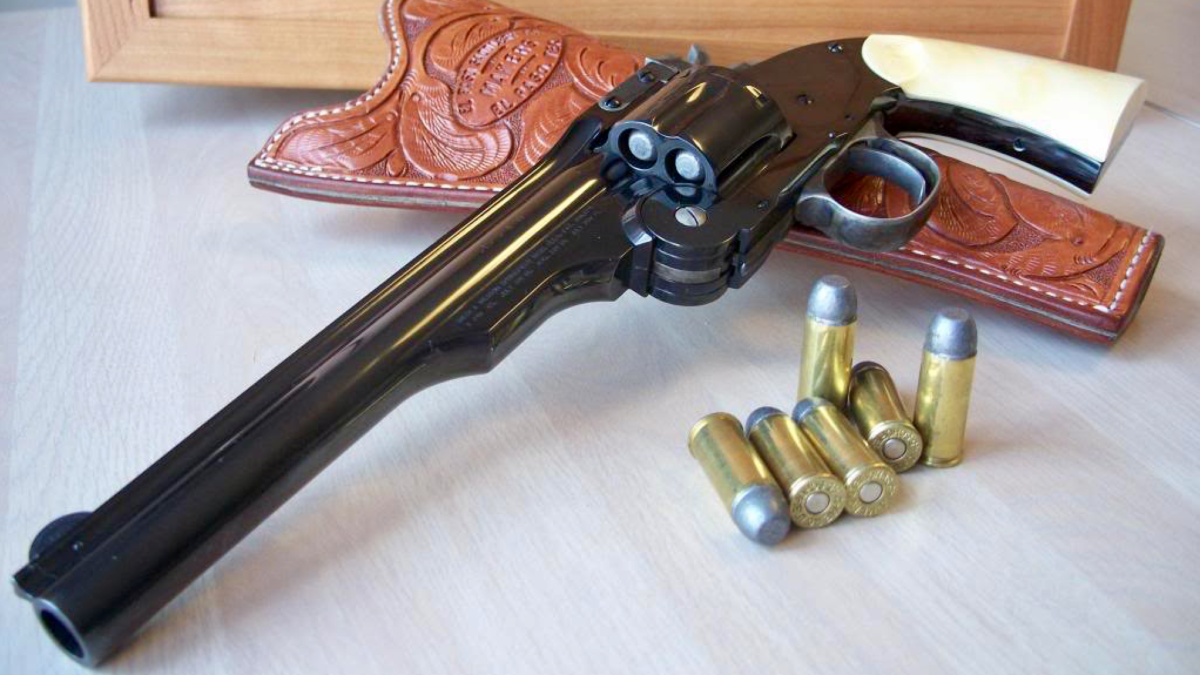 When I think of the guns that got away, I remember attending gun shows with my dad.  My father went through periods of gun collecting that focused on certain types of guns.  At one point he was into German made Walther PPK pistols.  A particular seller had a dozen PPK 7.65mm pistols on his table.  They were all nice.  One was priced much lower than the rest. It had an odd cloisonné medallion on its left grip panel.  When my dad inquired about it, the seller said, “Yeah, someone must have glued that on there.  I don’t know what it’s supposed to mean, but it ruins the value of the gun.  That’s why I have it priced so cheap. I think if I tried to get it off there, I’d ruin the grip.”

My father considered buying it but he knew it was impossible at the time (pre-internet days) to find an original set of replacement wrap around PPK Bakelite grips.  He passed on the Walther, but once back at home, he leafed through his copy of Rankin’s “Walther Models PP and PPK 1929 -1945” and showed me page 37 which displayed the inlaid medallion as included on factory presentation grips.  Noooooo!  That little medallion actually caused the little pistol to be worth triple the value of a standard PPK.  And they guy had it discounted for sale on his gun show table!  Now that’s one that got away!

During my police career I would often be called into the station whenever a citizen wanted to turn in a firearm.  Most of the time the guns were cheap and rusty and undesirable, but not always.  One that stands out was a flat latch S&W Model 36, unfired in the box with all papers and cleaning kit.  A widow turned it in, but I wasn’t available to recommend she bring it to a reputable gun store that wouldn’t rip her off.  While many police departments sell turned in guns like these via internet auction sites, mine did not.  The gun was later destroyed per policy.  Tears were shed.  I sure wish I could have rescued that gorgeous old blued steel snubby.

A late 1800’s Schuetzen target rifle came into the PD another day I wasn’t working.  I saw it in the property room and was allowed to handle it.  Typical of the craftsmanship of more than one hundred years ago, this single shot rifle had an ornately carved walnut stock with a high comb and “under shoulder” steel butt plate.  Aperture sights front and rear were matched to an octagon barrel.  The frame and barrel were inlayed with gold, including three initials presumed to be the original owners.  I took a Polaroid photo of it and a gentleman at a fancy gun show with similar old antiques looked it over and said it was easily worth $10,000.  I couldn’t talk the powers that be at the PD out of having it destroyed.  I tried every angle like, “No one is going to rob a gas station with a $10,000 single shot antique!  The sale of just this one target rifle will fund our range training for years!”  Ah well, another one that got away.

The Ones That Didn’t Get Away

It’s been said that you make your own luck.   I guess I’m a lucky guy because I haven’t let many guns get away.  When the opportunity knocked on my door presenting a Smith & Wesson Schofield 2000 several years after they sold out, I bought it for the retail price it cost when new.   This was a good deal since prices had escalated at a rather high percentage as the years went on.  When the exact .44 Special Freedom Arms model that I wanted popped up on Gunbroker, I hit the “Buy It Now” button because I knew Freedom Arms single actions take up to a year and a half to receive after placing an order.  Several years ago, the ex-German police trade-in Heckler & Koch P7 squeeze cocking 9mm pistols arrived on US Shores, I bought one as quick as I could.  It’s a unique pistol I had desired since I was too young to even own a gun.

Many of the guns that almost got away I was still able to purchase.  Some were priced right and others were a bit more.  Most guns can nevertheless be acquired if you’re willing to spend a bit more after you’ve realized your mistake.  My advice if you do stumble upon a rarer firearm that tickles your fancy and makes you consider selling other items to pay for it is…do it!  I don’t buy guns to sit on them for profit.  I buy guns because they make me happy and I enjoy shooting them.  This also means that I’ve sold gun to finance purchasing some of my grail guns.  I sold a pair of .44 Special AWA Peacekeepers to finance the purchase of my Freedom Arms Model 97 .44 Special (and that still only got me two thirds of the way toward the purchase price).  I miss those well made revolvers, but I had to make a choice and the Model 97 was a win.

One more that I recently obtained that serves to illustrate my point is a Ruger Bisley .44 Special single action revolver with a 7 ½-inch barrel.  It was a limited run of 100 with a high polish finish and oxblood Ruger medallion wood handles made for The Shootists.  The Ruger Bisley is engraved on the left side of the barrel with “1985 – Shootists 25th Anniversary – 2010” and on the right side of the barrel with “Men Who Stand in the Gap”.  Each has a prefix serial number of “25-XXX” and the last three digits are also engraved on the front of the cylinder.  A Belt Mountain base pin with the number 25 on its front is also present.  I didn’t become a Shootist until after 2010 and I’ve always lusted after one of these super rare revolvers.  When one came up for sale from a Shootist who had two, I lunged at the chance.

I wasn’t going to let this one become another “one that got away!”

9 thoughts on “Guns that Got Away: Steve”