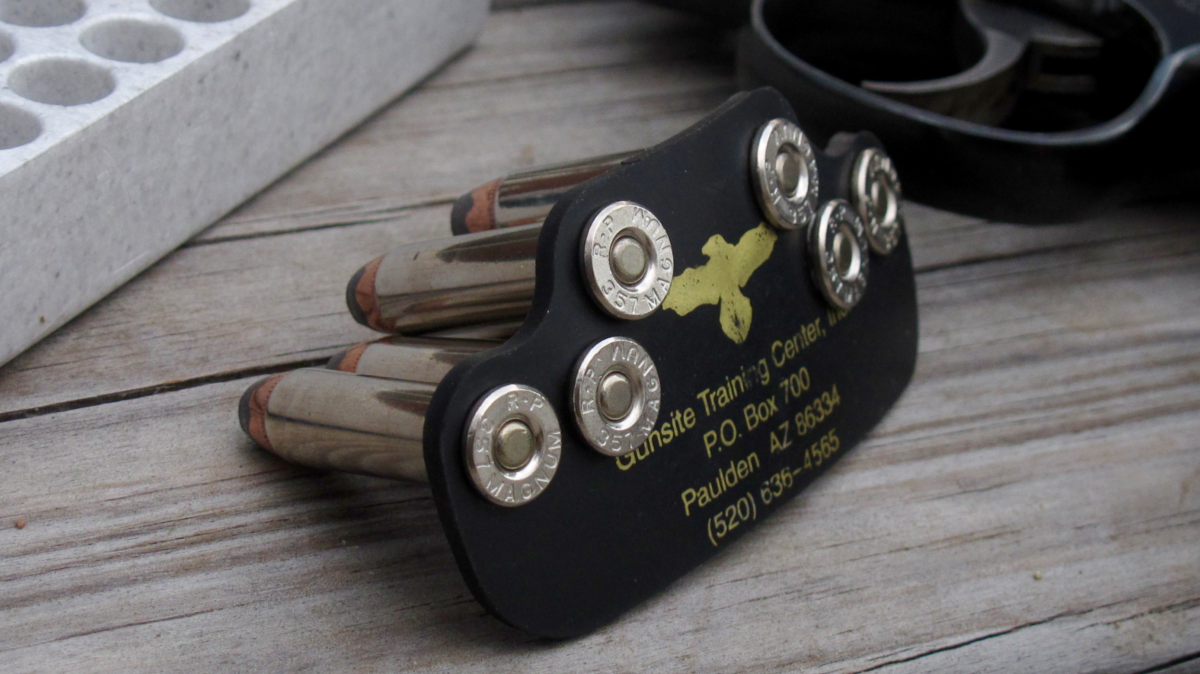 The previous article on classic speedloaders generated some interest, and a fortunate spinoff for the RevolverGuy audience is that Mr. Bert DuVernay, former Director of the Smith & Wesson Academy, was kind enough to loan us some other, lesser-known, designs for examination. One of these was the Gunsite Training Center loader.

The loader is kind of a crossover between a Bianchi Speed Strip and the old Hunt / Safariland loader that was previously addressed in the referenced article. It’s made of flexible and relatively soft polymer, which allows the loader to be peeled away from the cylinder, very much like the Hunt design, after the cartridges are inserted. Unlike the Hunt, this loader does not present all six rounds together for loading, but instead splits them into two groups of three, like the “Half Moon” clips made for Model 1917 Colt and Smith & Wesson revolvers during “The War To End All Wars.” Presumably, this is to aid in getting a clean release of the cartridges during loading.

The loader works without too much drama, releasing the cartridges fairly easily, although (like the Hunt) proper technique is very important to make sure you don’t pull any of the cartridges out of the cylinder by accident. In this regard, the Bianchi-designed Speed Strip seems to have  a measurable advantage.

The most unique feature of the loader is its size and shape.  As you can see in the photos, it’s a rather large package for just six rounds, and the shape would make it especially awkward to carry, let alone conceal.  It lacks the minimalist efficiency of the Speed Strip which makes that product so easy to carry and conceal, yet doesn’t improve loading efficiency or speed well enough to justify the outsized dimensions. Frankly, unless you planned on carrying one of these in a very large jacket pocket with nothing else in it, I can’t envision how you would pack it. I don’t think it would even work well in a cargo pocket. For the size and bulk, you could probably carry a pair of round-body loaders (like the HKS or Safariland Comp series) with less difficulty, less printing, more security, and have a more efficient loader to use.

This is probably why the product didn’t sell very well. One could argue that the inventory didn’t move very fast because interest in revolvers was waning during the years it was introduced, but that would be a generous explanation. Frankly, loaders like the Speed Strip and HKS continued to sell strongly in those years, and demand for an improved widget was strong enough that the SL Variant was designed and patented during the same period (U.S. patent in 1999), going on to achieve a cult-like following.

I think the students at the Gunsite Training Center just didn’t see any advantages over existing products, so it didn’t catch on, and remained in relative obscurity.  Still, it’s an interesting footnote in speedloader history, and we thought you’d enjoy seeing it.

We’d like to thank Bert DuVernay for bringing it to our attention, and for the generous loan of it. We would also like to thank Ken Campbell, Chief Operating Officer at the Gunsite Academy, for the background information he provided.