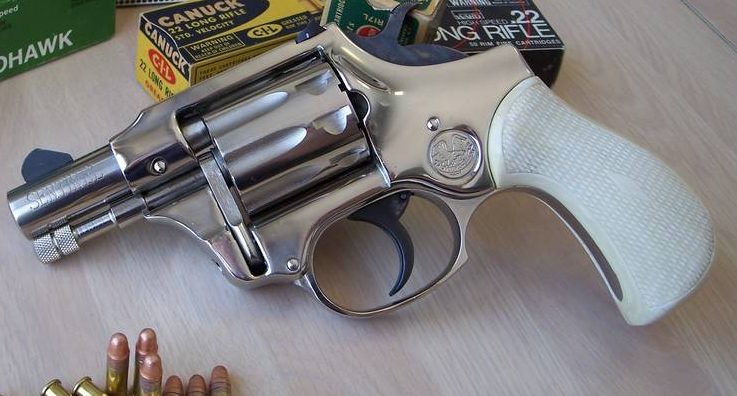 As RevolverGuys, we often focus on the good stuff. S&W. Colt. Ruger. We may frown upon other “lesser” makes of wheelguns (and I won’t mention them by name). But there is a make and model of revolver that is often overlooked because it wasn’t made by the big three.

An internet search of YouTube or Google will turn up lots of people who swear this .22 is the neatest and most accurate revolver they’ve ever owned. .22s are great trail guns and excellent for training because you can shoot a whole lot of rounds for very little expense.

I walked into my local range/gunshop three years ago and this little snub nose .22 was on their used gun shelf. I’ve wanted one just like this for over 30 years and I was amazed to see it resting there, staring back at me. It was nickel plated with white birdshead grips, a very striking version of High Standard’s Sentinel.

The sights are big and easy to see, unusual for snub nose revolvers from back in the 1960s and 70s. It’s a 9-shot .22 long rifle and it’s overbuilt like a bank vault door. I asked to take a look at it and found the little lightweight to have a tight lock up and perfect action. It was unfired but had no box or papers. It’s a double or single action with a case hardened trigger and hammer. No screws were used to build it, instead it’s held together with only pins. This is truly a feat of engineering.

It turned out to be a Model R-103 (the first was the R-101 and the last was the R-108), designed by Harry H. Sefried II. He worked with “Carbine” Williams at Winchester and then at High Standard where he designed the Supermatic Citation and the Olympic pistols and this Sentinel revolver. He was then the Chief Engineer at Sturm, Ruger & Company from 1959 to 1979. Sefried had a major part in designing the Ruger .44 Magnum carbine, the Security-Six, the Redhawk, the Old Army, the Hawkeye and the Mark II pistol. He also designed the rotary 10-shot magazine used in the Ruger 10/22. That’s a super impressive design resume!

These aluminum frame High Standard revolvers have steel barrels and cylinders and are very well made. They were made right alongside the notably high quality and treasured Hi-Standard (the company’s name switches between High and Hi depending on which literature you read and what the company printed on their gun boxes over the years) .22 semi-auto target pistols. The grip fits the human hand very well, unlike most factory S&W and Colt grips. Skeeter Skelton once said in print that High Standard really got the grip right on their Sentinel revolvers and I think he was right! There is no need for a grip filler adaptor with these handy little snubbies.

This dimunitive Sentinel shot great groups at the range in both single and double action. I even loaded two shotshells, followed up by seven hollow points and fired them on a snake target. I’ve found my ultimate .22 caliber “woods” gun!

This little 9-shot is really fun to shoot with virtually no recoil. The cylinder opens to the left like most swing out revolvers. However, there is no latch on the frame to release it. Instead, the cylinder’s ejector rod head (a finely knurled piece, again the quality of workmanship here is outstanding) is simply pulled forward by the thumb and forefinger of your left hand and the cylinder opens with a slight push from your middle and ring fingers. It’s fast and easy. You’re really not getting your hand in front of the muzzle, it stays underneath to pull the ejector rod. Plus, the gun should only have spent casings at this point and your finger should be off the trigger and it’s a double action trigger too.

The price was $279 on the tag and I talked the shop down to $250. I don’t think I could find another brand .22 revolver for that price, let alone a 50+ year old, mint condition revolver with this much pizzaz.

You have to hold one of these in your hand to truly appreciate the natural “point-ability” and ergonomics of the grip. The 4″ and 6″ versions had square butt grips instead of this version’s birds head round butt. The white plastic grip is one piece and slides on the frame from the bottom where it is secured by a single screw (the only screw used!) like a Hogue or Ruger GP100 grip peg. There are swishes of crème colored lines in the plastic that give it a pleasant and natural looking appearance, along with excellent checkering set off by a large diamond in the middle of the pattern.

Blued Sentinels have a bit of a mismatched looking finish due to the contrast of the blue color on the aluminum frame and the blue on the steel cylinder and barrel. But the nickel plate guns cover all that with a fine reflective finish. The engraving of the model “Sentinel” and the address on the barrel is perfectly well done and the make and model number looks good on the frame too.

It’s interesting to note that the cylinder has a relief for the firing pin if the gun is dry fired. Many .22 caliber revolvers would peen their hammer-mounted firing pins if they were dry fired. This Sentinal offers the design advantage of dry firing without fearing of ruining the firing pin. Another nifty idea from Mr. Sefried II, he really knew what he was doing.

These guns were offered by High Standard with 2”, 4”, and 6” barrels in blue and nickel and with various grips (black, brown, or white) and wood grips. They were chambered in .22lr and .22 Magnum. There is even a .357 Magnum version too. If you’re a RevolverGuy looking for a woods carry .22, if you have snake or other pest nuisances, or if you just like inexpensive but high quality guns that most other people don’t know about, a High Standard Sentinel might be just right for you! Prices on Gunbroker are much less than buying a new Ruger LCR .22 and you only get eight shots with the little Ruger. And none of the pizzaz that comes with this neat old High Standard!