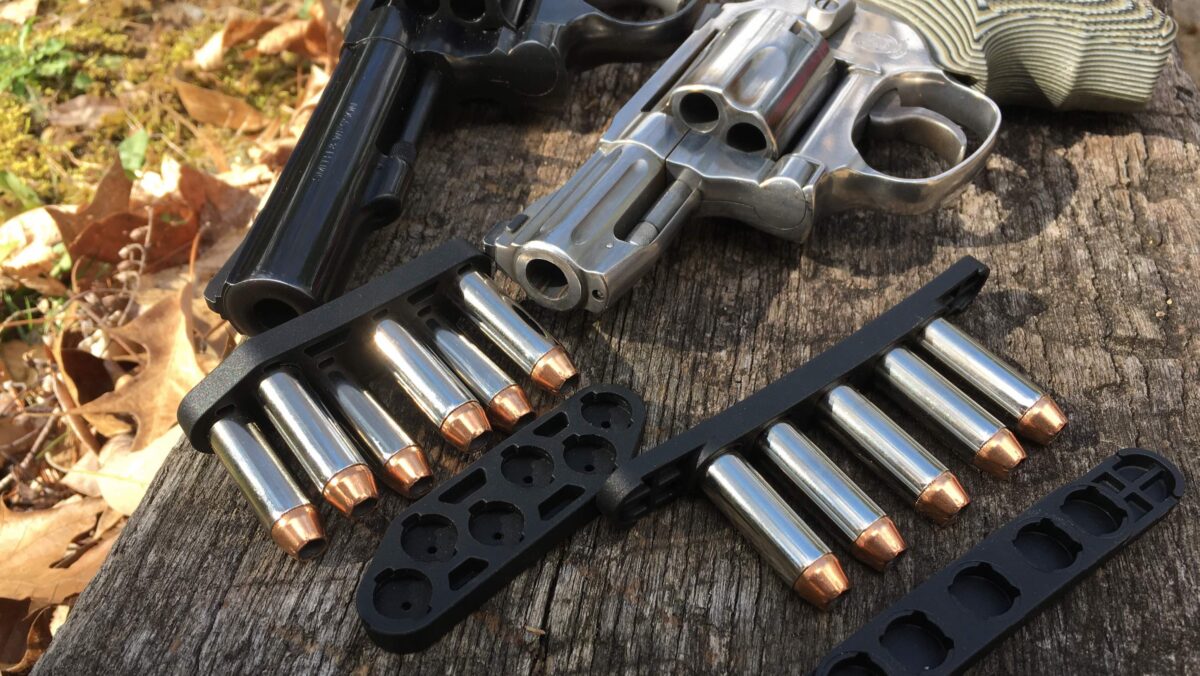 Since publishing my last article on Zeta6 products I have been in touch with Zeta6’s owner, Michael Lyle. Michael is a unique guy in that he is always willing to accept input on his products. Today I’m going to look at his extensively modified J-Strip, the SYM-Strip, and a product yet to be seen in these pages: the Zeta6 K-PAK.

Disclaimer: though I have been in communication with Michael, I have zero financial interest in the sale of Zeta6 products (though Patrons do receive a discount). The links in this post all go directly to Michael’s website and are not affiliate links.

The Zeta6 K-PAK is a 6-shot reloading tool for S&W K-Frame revolvers. Rather than the more typical 2, 2, 2-arrangment of most reloading strips, this permits  – nay, encourages – loading three rounds at a at a time. The rounds are arranged in a simple offset pattern that allows each set of three the appropriate curvature to match the chambers of the K-Frame. This is a very  neat design. 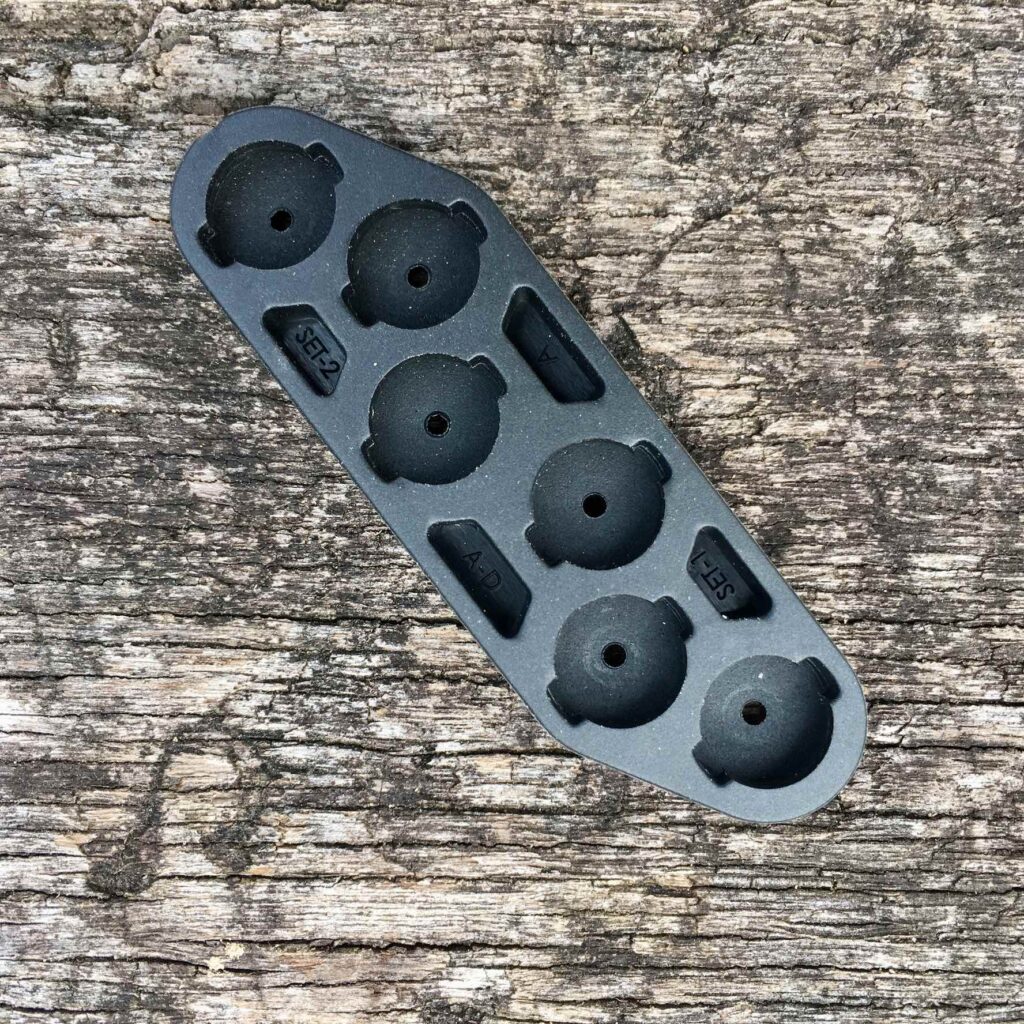 The obvious expense to this bargain is slightly increased thickness of the loader over a more traditional reloading strip. It is, however, quite a bit shorter, and depending on your carry methodology may be a better fit than a traditional strip. I didn’t find it onerous to carry in a front pocket at all. In fact, after leaving the range I carried a forgotten, loaded K-PAK in my pocket for most of a day. 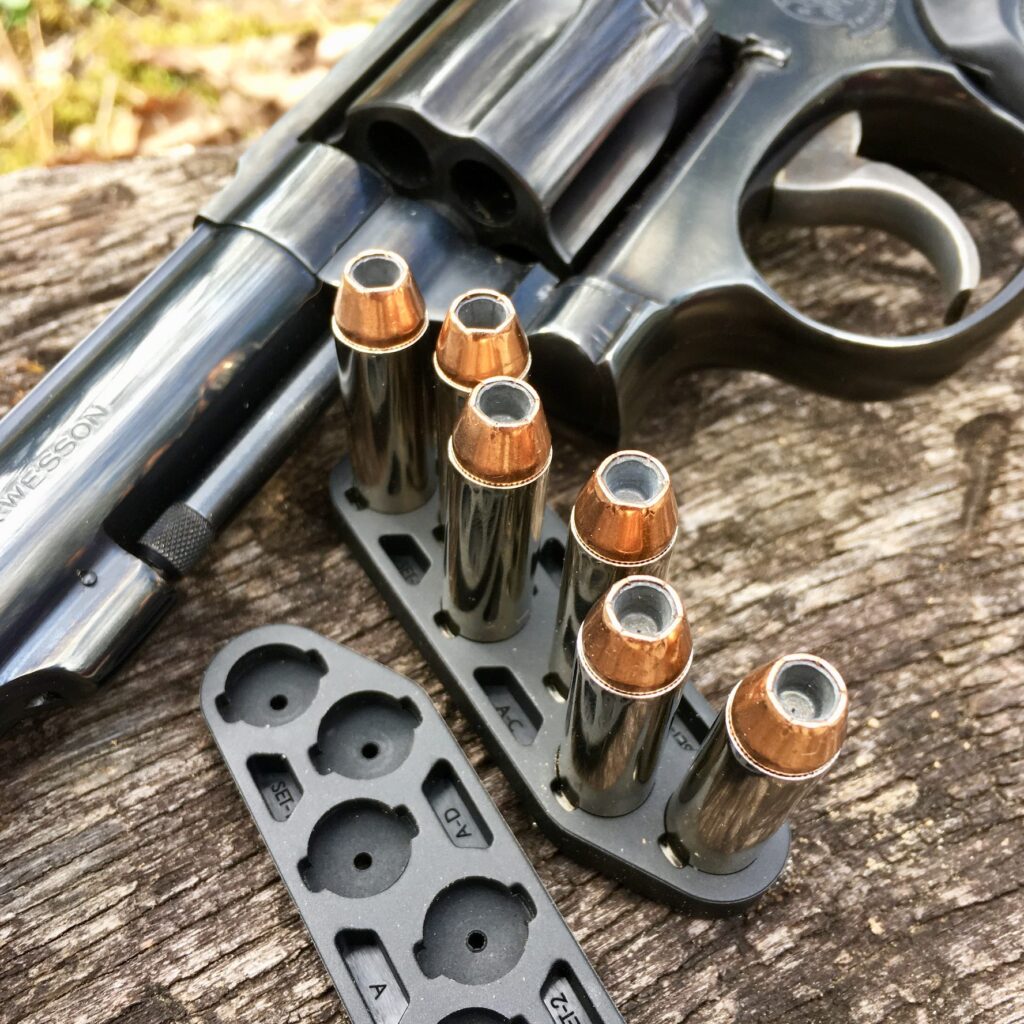 Currently the K-PAK is only manufactured for the K-Frame. I attempted using it with my L-Frame 686 and while it would sort of work (I notice I’m grimacing as I write that) it didn’t work well. As with the J-Strip, I was surprised at how precise the cartridge alignment is with these products. And nowhere have I been more impressed with the alignment than in the K-PAK; three cartridges fit perfectly in a K-Frame’s cylinder. I would like to see this line expand to include a broader range of revolvers (like the Colt King Cobra, maybe?). 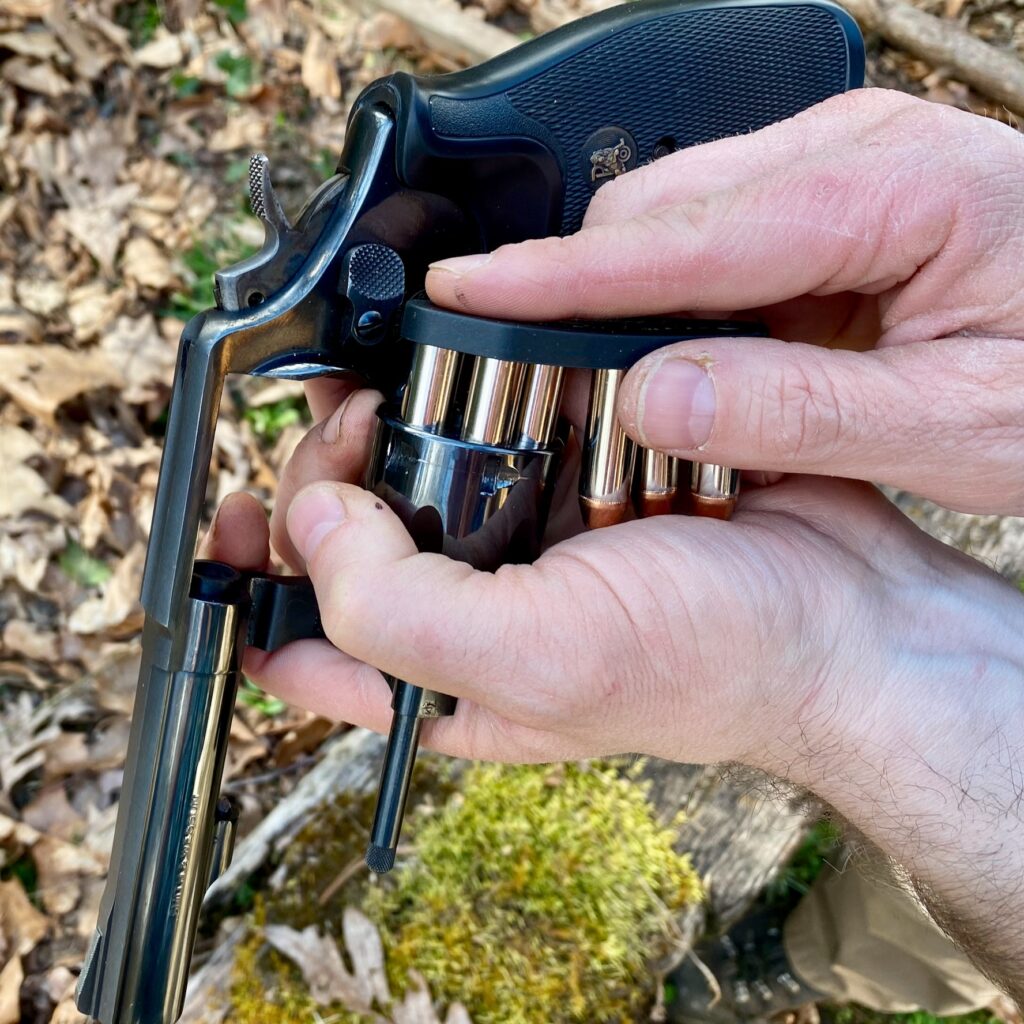 The K-PAK is vaguely reminiscent of the Gunsite Training Center loader we looked at almost three years ago. The Zeta6 K-PAK seems to be a much more workable design, being much smaller, and much more rigid. I’m going to give you a quick look at the new J-Strip, then I’ll talk about my shooting impressions with both.

As I mentioned, I have been in touch with Zeta6’s owner for several months now. Not only has he been in touch with me, he’s been in touch with several noted revolver aficionados including Michael de Bethencourt. One common complaint that Lyle received about the early J-Strip was the single round on one end. The J-Strip’s claim  to fame is the perfect alignment of cartridges to chambers in a 2-2-1 arrangement. In my opinion this created two problems.

First, if the loader came out of the pocket oriented incorrectly, there was a potential to attempt to load the single round and the first round of the next set of two. This was not desirable for many reasons, and tended to foul the whole reload. The second thing that made the original J-Strip less than idea was that its 2-2-1 arrangement didn’t offer a great option for guys like me that only carry 4 on a strip.

So, Michael redesigned the J-Strip, called the new version the SYM-Strip (SYM for “symmetrical”), and configured the cartridges 2-1-2. In addition, he also put a tab on both ends of the SYM-Strip instead of the single tab that is found on nearly every other reloading strip on the market. I think that little innovation is worth its salt alone. 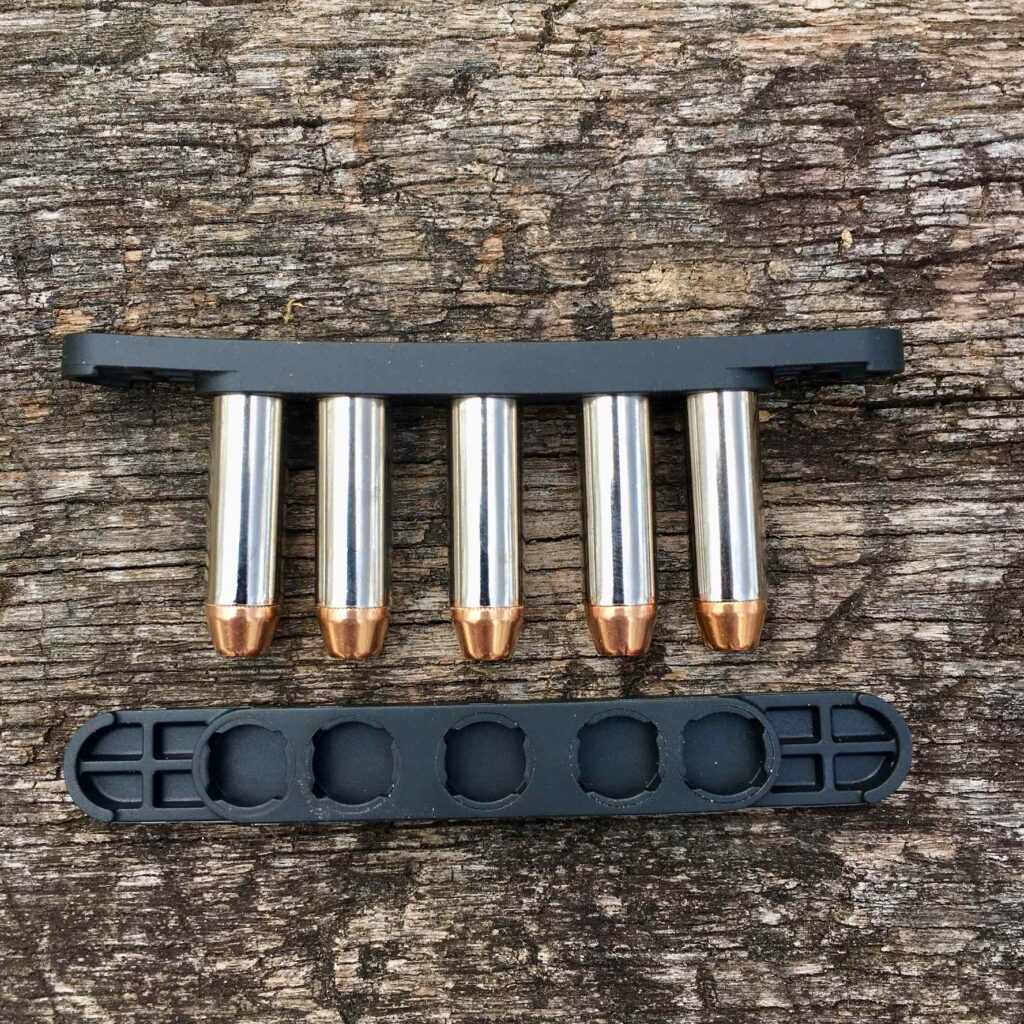 Shooting the K-PAK and SYM-Strip

I didn’t get as much range time in with either the K-PAK nor the new SYM-Strip as I would have liked. Aside from being very busy this week, a couple of other projects have the bulk of my attention right now, including an upcoming review of the Colt Python. Still, I did get some rounds on both the Zeta6 K-PAK and SYM-Strip. Bottom line up front: I like them.

The K-PAK’s staggered cartridge arrangement makes the loader quite a bit more rigid than most strips. This lends itself well to peeling off cartridges, which come out more easily than with any similar loading device I’ve used.The loader peels off the rims extremely easily and in my dry practice and live-fire sessions I had no problem with losing rounds. 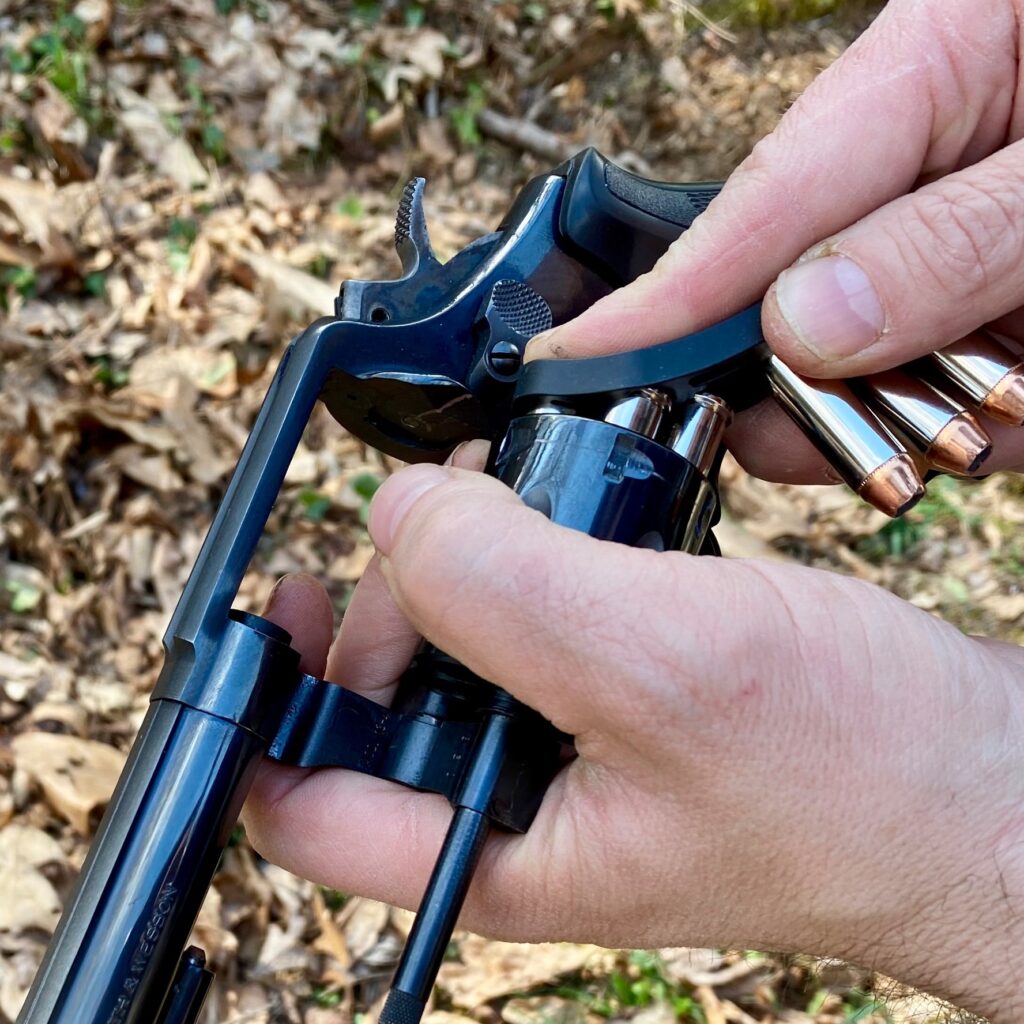 I do have a complaint about this loader, though. The cartridges are arranged in two opposing curves. Getting the first three rounds into the gun is fast and easy. Unfortunately, getting the second three into the gun takes time. Because the curves are opposing the loader must be rotated (though in fairness, because they are opposing one set of three will always be oriented correctly). I found myself bringing my hand back to my body to support the loader against my ribs to prevent dropping it while rotating. I then brought it back out to meet the gun, consuming precious time. 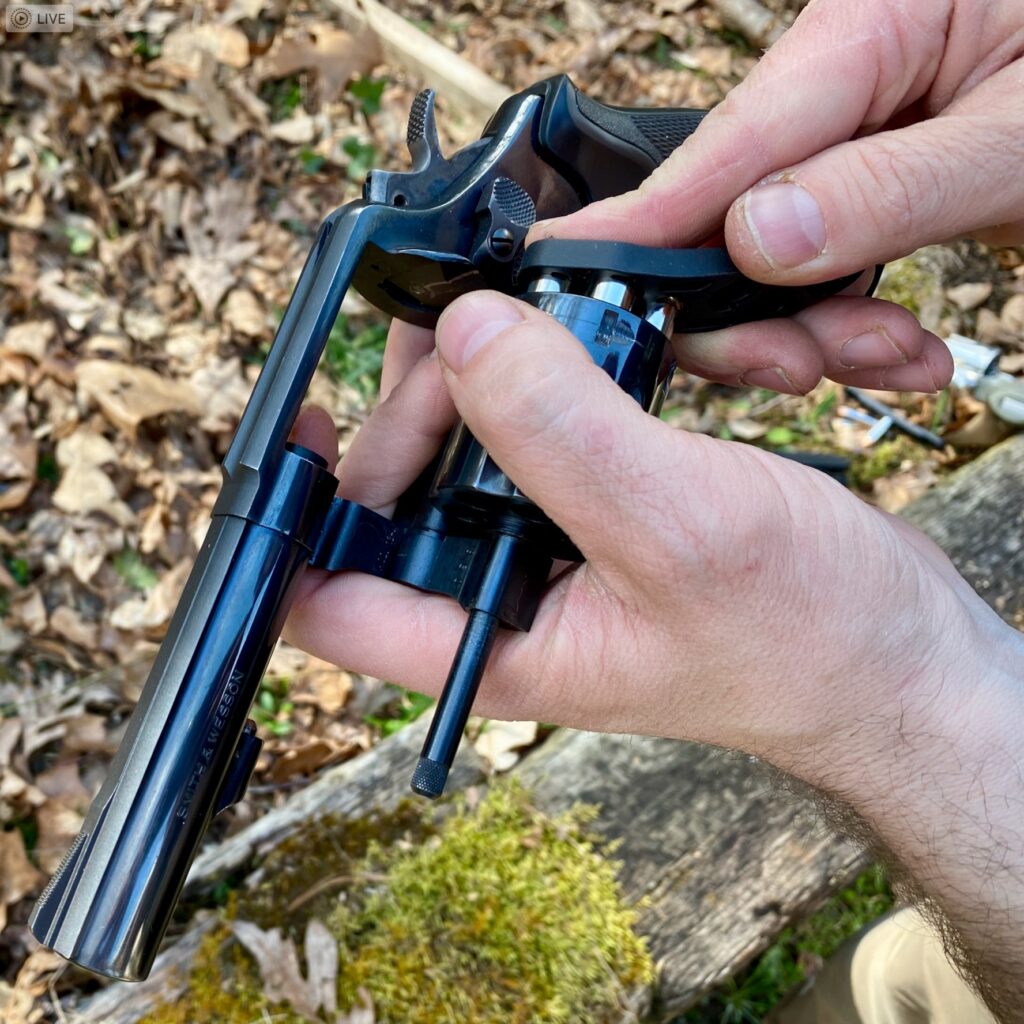 My times with this loader averaged around 10 seconds in the limited timed runs I did. This is honestly, about on part with most reloading strips, but I feel that extensive practice could speed – and smooth – this considerably. I have been slowly working on an extensive reloading strip comparison article similar to my speedloader comparison in which I will list more comprehensive times.

I was equally impressed with the SYM-Strip. I’ll be honest, I wasn’t sure how much difference this updated model would make to me, but I found the subtle modification to the arrangement and the dual tabs made all the difference in the world. Not to beat a dead horse, but not having to make sure the right end of the loader presented first mitigated a lot of potential problems. 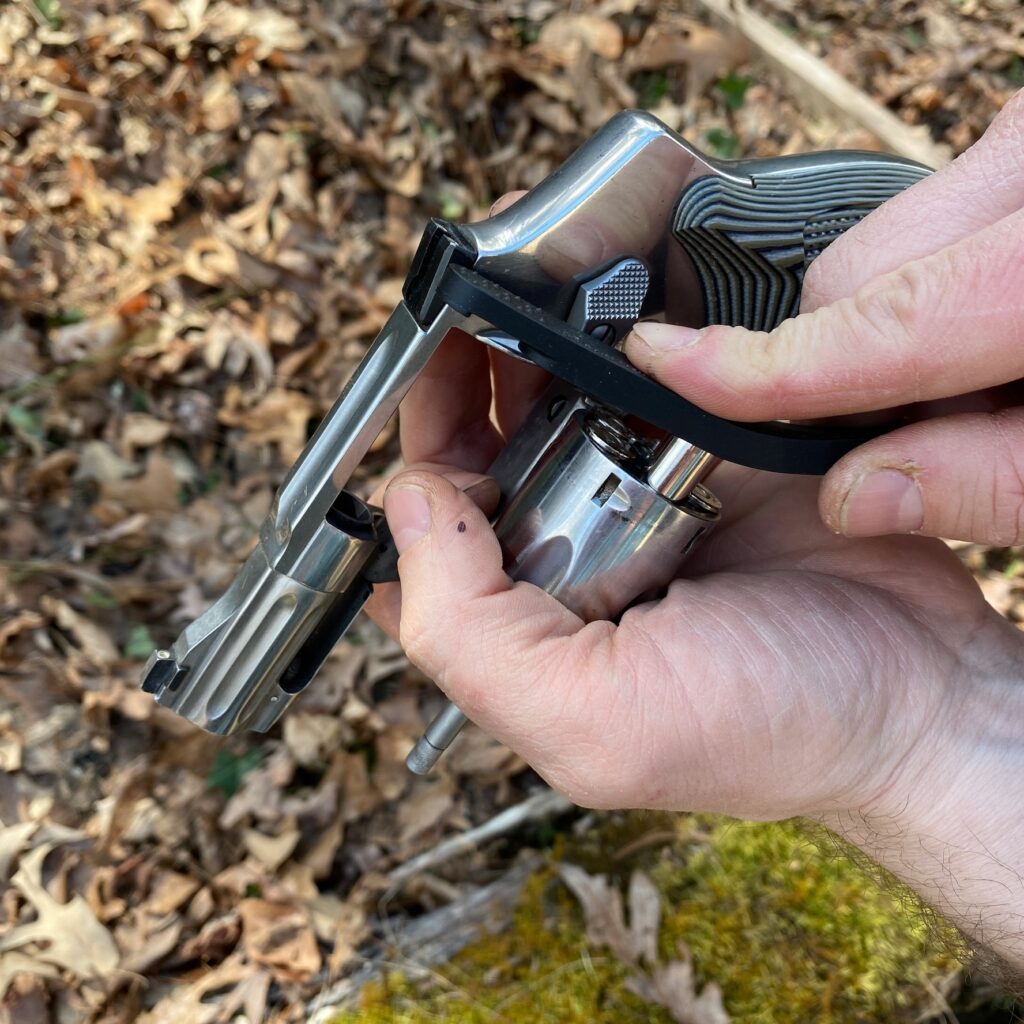 Though I would probably only carry this strip loaded with four rounds, I loaded it with five for all of my practice sessions. Getting the fifth round in was quite a bit easier than with a 6-round strip loaded with six rounds (with no pesky, superfluous round to get in the way). How that stacks up, on the timer, to other reloading strips? Again, we’ll find out in the comparison article I have planned.

I didn’t think the original J-Strip was a huge leap forward in reloading strip design. I am pretty impressed with the new SYM-Strip, however. If you carry a J-Frame you should definitely check this one out. When I’m carrying a J-Frame revolver now, one or two of these will be about me, and I wouldn’t mind seeing them available for a few more makes. And if you are one of those rare individuals carrying a K-Frame, you should definitely incorporate the Zeta6 K-PAK into your reload options.

13 thoughts on “The Zeta6 K-PAK and J-STRIP Update”