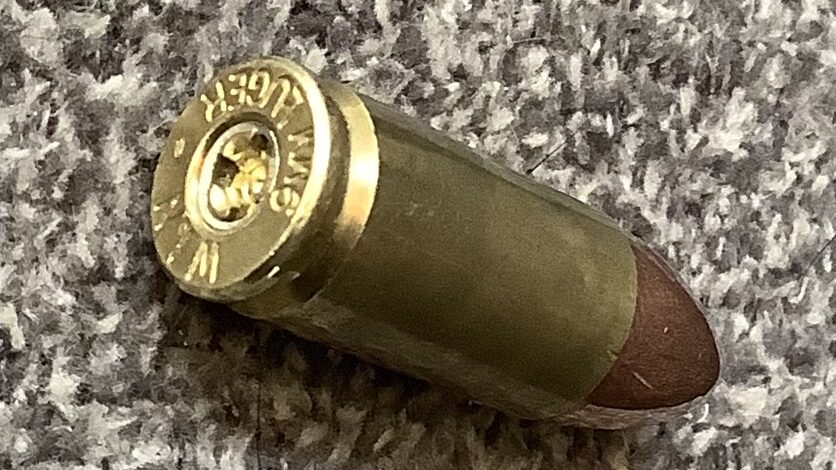 I encountered this dud round in the middle of a shooting competition at the range recently.  Even though it’s from one of those bottom feeders—Eek!—it provides a good opportunity to make a few observations that are universal in nature, and not related to any particular weapon type.

As you can see from the lead image, the round is a 9mm cartridge with a primer that’s installed backwards. This round was not factory-new, but had been reloaded by a commercial reloading outfit that sells remanufactured ammo in bulk. 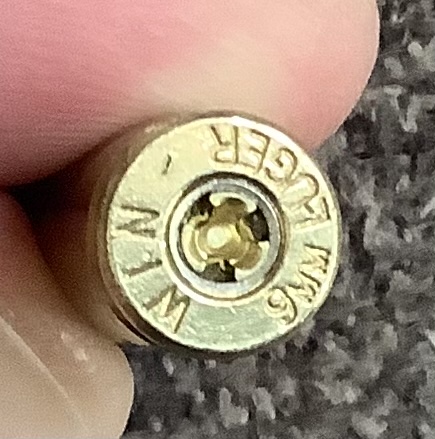 I attempted to fire this cartridge on a stage where the shooter was required to draw and shoot an 8″ steel plate at a distance of 15 yards, obtaining a single hit. At the sound of the timer, I drew from concealment, aligned the sights, and pulled the trigger on my pistol, only to get the dreaded “click.” I moved right into performing Immediate Action (“Tap, Rack”) and was able to hit the target with the next shot, stopping the timer at just under twice the average stage time—not bad, considering, but certainly not good, if I’d been making this shot for real, to save my skin.

Immediate Action.  While I deserved an “F” for my lack of attention to detail in preparing magazines, I was pleased with how quickly I fixed the problem. Once I got that “click,” I immediately went into my “Tap, Rack” without undue delay. One of the ways that I’ve heard “Immediate Action” expressed is to call it a “non-diagnostic clearance,” and I like that expression because it conveys what we want.  The objective is not to pause and diagnose the exact nature of your stoppage, but to immediately perform the action that is most likely to clear it (your “Tap, Rack”), once you get the proper stimulus (the “click”).  No detailed investigation or analysis is required here, just react to the “click” with your “Tap, Rack” and attempt to fire again. If that doesn’t work, then we go down another branch of the tree to remediate.

I’ve been diligent about training this over the years, and I was glad that I did everything on autopilot when I encountered this unexpected stoppage. It was a good testament to my training, even if it didn’t say much about my attention to detail when preparing magazines.

Note that the nature of your non-diagnostic action will vary depending on your weapon. Our response to a failure to fire is different in an autopistol than it is in a revolver or pump shotgun. If you work with multiple types of firearms, make sure you put in the reps to program the right response with each type. It won’t do you any good to reflexively tap the bottom of your revolver grip!

Every gun represents a compromise of some sort, and we have to take the bad with the good. There’s a lot of folks out there who disfavor the revolver because of its (comparatively) low capacity, but it’s only fair to note this disadvantage is offset by other benefits.

Consider, if you will, how this scenario might have turned out different for me, if I’d been engaged in a close-contact battle with an opponent. Is it possible that I may not have had the space, time, or ability to clear this stoppage and resume firing? Would it be an advantage to be able to make the weapon fire again simply by pulling the trigger a second time?

Trainer Greg Ellifritz has previously documented how auto stoppages are relatively common in real-world encounters, when stress, chance and Murphy take their toll. While we recognize the substantial benefits offered by autos, it’s important to understand their weaknesses as well, and consider what we can do to mitigate their effects. Certainly, part of that is to conduct appropriate, high quality training, like the training that helped me to recover from my mistake during the match.

There are equipment issues to consider as well, though. Could it be that the revolver isn’t “dead” after all, and there’s a still a good case for it in the polymer age?

Sometimes there’s a lot that can be learned from a simple mistake in training.