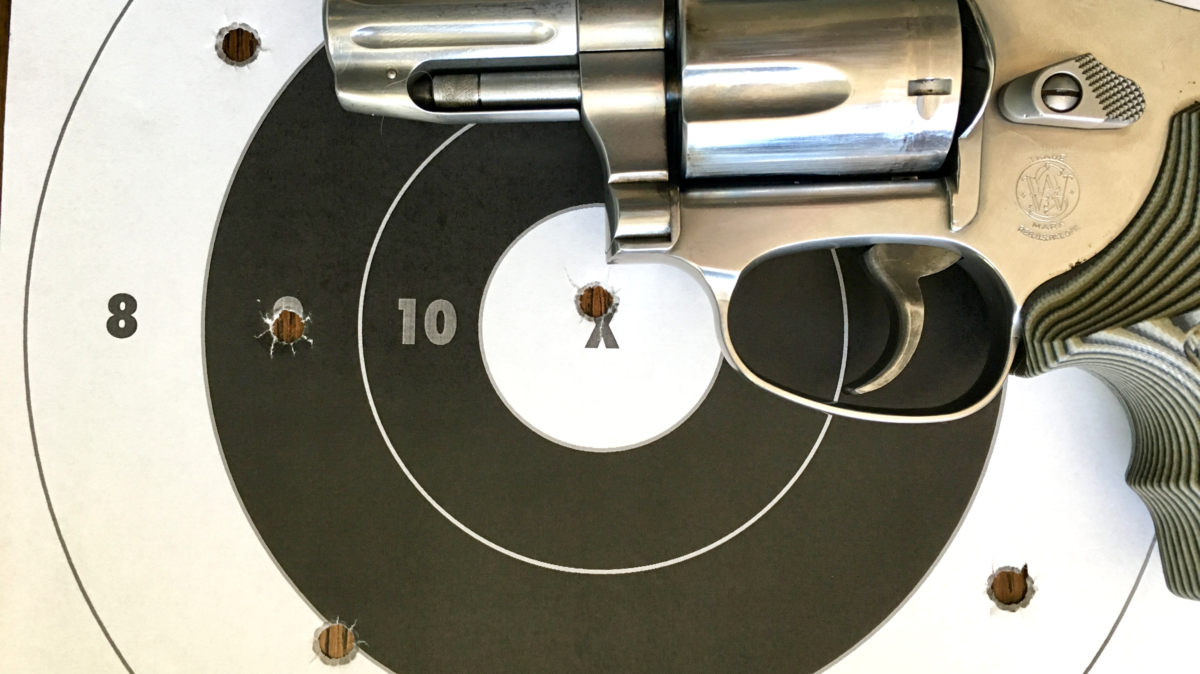 Sometimes you can be too close to something, too involved in a topic to see it from other perspectives. You can stand too close to a painting to see the whole scene and instead, focus on individual elements. A couple days ago I pulled my S&W 640 Pro out of my range bag. After a couple strings of fire I realized I had been suddenly yanked from the midst of the trees and treated to the full view of the forest that I’d been missing.

In the last four months I have mostly been focused my range time on my carry 1911. I have some hard skill-oriented goals I want to accomplish with this gun, and I want to build intense familiarity with it. It’s the gun I’ve spent aobut 18 hours dry practicing with this year, and the gun I’ve put ~2,500 rounds through so far.

The 1911 (and especially this 1911) is an easy gun to shoot. The trigger is very light and very crisp, and has very short travel. The gun makes recoil management easy by allowing a full gripping surface (to say nothing of its perfect grip angle). Sight radius, even on my shortened 1911, is long enough to allow a decent degree of precision. In short, it’s about everything you could want in a shooter.

A few weeks ago I headed out to the range.  I had decided to run a few drills with my favorite small revolver. The first drill I had planned was the Super Snubby Test from Hardwired Tactical. I’ve run this drill before, and generally score in the high 130s or low 140s (out of 150 possible). I had also just ran the single-stack version of the Advanced Super Test with my EDC 1911 and scored a 295 out of a possible 300, so I was feeling pretty confident in my abilities.

I ran my target out to 10 yards, readied my 640, and set the turning target to an 8-second face time. The target turned, I presented the little revolver, and I proceeded to get slapped in the face by reality.

Forest? What Forest? All I See is Trees!

That first stage on the Snubby Super Test was humbling. I didn’t get all my rounds off on time, and most of them landed somewhere outside the 9- and 10-rings. I was wondering what happened, where I’d gone wrong. And then I realized what I’ve been saying for a couple of years now is actually true: small revolvers are hard to shoot!

Because I had spent several years carrying, shooting, and thinking about nothing but revolvers (and mostly small revolvers), I got pretty good with them. I handled my 640 Pro on a daily basis. I dry practiced with it several times a week. Over the span of two years I put nearly 3,500 rounds through it – probably more than most J-Frames get shot in several lifetimes. I got really used to that gun and I worked very hard to overcome its limitations.

Now here I am, struggling – failing, actually – to get off five rounds in eight seconds. I was surprised by the recoil and muzzle blast, even with target-grade .38s. Accuracy was nowhere near where I wanted it to be, even at a mere 10 yards. Let’s look at the lessons I took out of this experience.

Small Revolvers are Hard to Shoot

The most universally applicable lesson in this experience was that small revolvers are objectively difficult to shoot well. They are are hard to shoot because they are small. They are light, but have really heavy triggers. It is difficult to move a 10-pound lever while keeping a 1-pound object perfectly still. Not only are the triggers heavy, they require long movement and are coupled with small grips that almost seem designed to promote a sub-optimal trigger finger placement. Small revolvers usually have crappy sights, and even if the sights are fantastic, the radius between them is really, really short. All that adds up to a gun that is mechanically very difficult to shoot well. 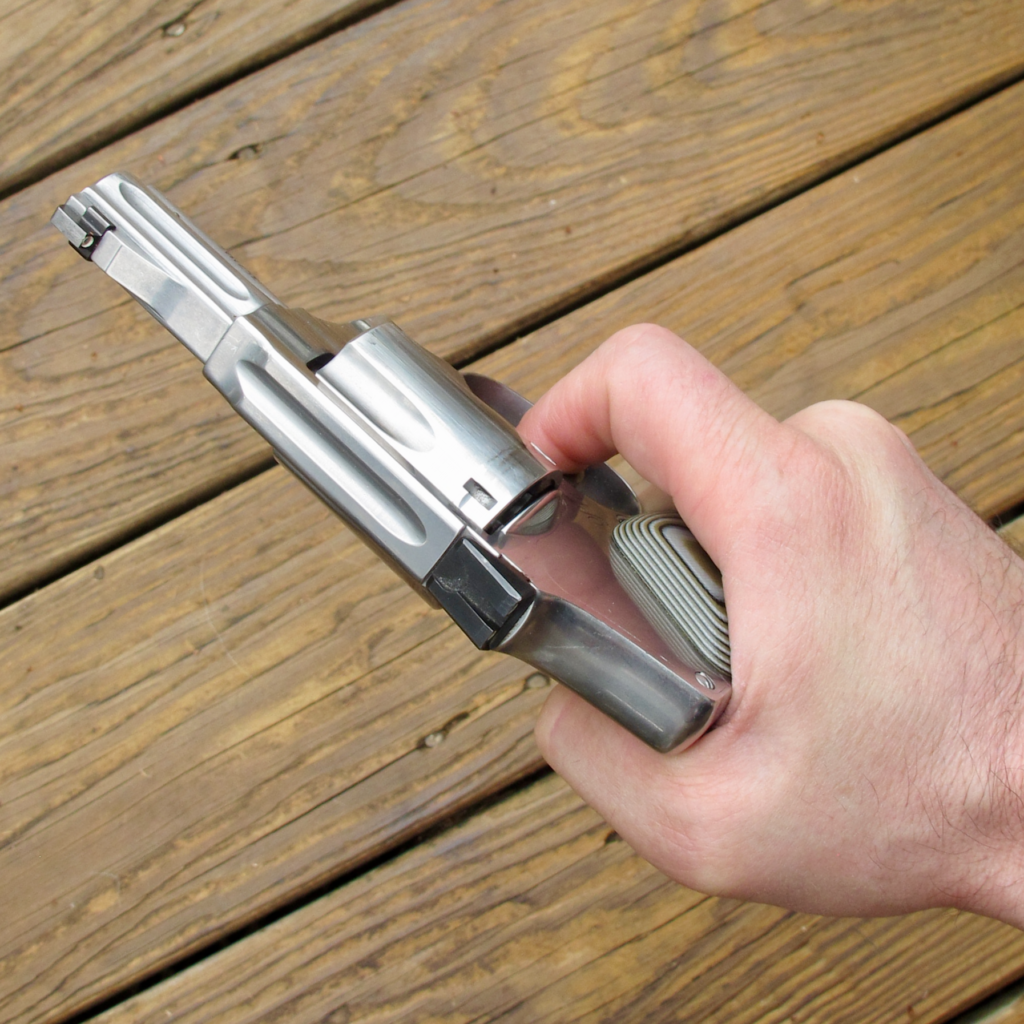 There is an additive effect in inexperienced and/or recoil-sensitive shooters. Small revolvers – even .38 Specials – can generate an intimidating amount of noise, muzzle flash, and recoil. As an example, the first gun my girlfriend ever fired was the 3″ Kimber K6s. To most of us here this is a fine, all-steel, shooting sized gun. For her it wasn’t, though. Immediately I was able to tell that it wasn’t a whole lot of fun. Seasoned shooters could ignore the noise and handle the recoil, but it can be distracting (at best) and completely intimidating (at worst) to inexperienced shooters.

We should keep this in mind (and perhaps voice it) when a well-meaning husband tells us he’s going to buy his wife some ultra-light snubby. Mike’s “That Guy” article sums up a conversation I get to enjoy with a family member every holiday. I have also recently witnessed this same thing in gun shops. The commando behind the counter recommends a snubnose revolver – one of the hardest guns to shoot well – to inexperienced shooters. Sadly, this is still a real thing.

We should also keep this in mind when we start getting confident in our own abilities, despite the fact that we haven’t exercised those abilities in a few weeks. . . or months. Which is a perfect segue in to the next portion of the article.

You Can be Really Good With Small REvolvers, but…

To steal a quote from Claude Werner: “It [a snubnose revolver] is only an arm’s length gun if you’re incompetent†.” If you’re not working toward competence and maintaining it, you’re probably incompetent. I found this out at the range. It turns out that being good at something requires more than just getting good. It requires staying good. . . otherwise you turn into someone who was good.

So who should invest the time to be good with small revolvers?

First and foremost, anyone who relies on a revolver for self defense should be good with it, and should work to stay good with it. Regardless of what you carry you should become competent with your chosen equipment. If you’re carrying a small revolver, you’ll have to work harder than most to accomplish this. Because I still carry my 640 occasionally, my failure to stay competent is just that: a failure.

If you’re a firearms instructor and there is any chance a student will show up in your class with a small revolver, you’ve probably got some work to do, too. I’m not a firearms trainer but if I was, I’d want to be able to shoot whatever showed up on my firing line. If I were the student showing up in class with a small revolver, I would want the instructor to be able to demonstrate (rather than merely explain) the art of the possible. I know this is not an issue with most of the trainers I tend to gravitate toward (Ayoob, Bolke, Cunningham, Dobbs, Ellifritz, Givens, Haggard, etc.) but it doubtlessly is with some.

How to Be Good With Small Revolvers

To again lean on Mr. Werner’s quote from above, being good with a small revolver is well within the realm of the possible. Small revolvers don’t have to be “belly guns” or “card table guns.” With some skill you can really let them stretch their legs. It takes work to get there and stay there, though. When I say “work” I mean “work,” in the same way you and I mean it when we say, “I had a busy day at work.” I mean hard, mentally and physically tiring work.

Professional training is imperative to getting good with small revolvers. It doesn’t necessarily have to be revolver-centric training, though that doesn’t hurt.  If you’ve had enough training on autoloaders that you’ve myelinated some basics, you can translate that for revolvers. Translatable skills important for employing a snubby revolver are stance, draw stroke, and moving the trigger without disturbing the sights.

Frequent, planned practice sessions support both getting and staying good. My first draft of this article had a paragraph beginning with the phrase, “shoot it a lot” but that doesn’t go far enough. Shooting should support skill development and maintenance, not just turn money into noise. This requires planning your session, finding drills that work the skills and abilities you want to achieve, and executing them.

Here’s one you probably haven’t heard in a while: development and maintenance of physical strength is important. My mother, for instance, cannot operate a factory double-action trigger on most S&W J-Frames. On the ones she can operate, she doesn’t do it well. Hand (and arm, and chest, and back, and leg) strength will help you grasp the gun, shoot accurately, and manage recoil. If you are strong you are starting with a significant advantage. Shooters of all stripe should probably invest some time in getting and staying strong.

I know none of what I said here is new information for most readers of RevolverGuy. Collectively the readers here probably have more experience with and knowledge of revolvers than. . . well, more than just about any other group of people I can think of. Sometimes we all need a reminder, though. I got mine at the range last week, and maybe someone here can learn from my mistake.

If you own a snubby revolver and rely on it for anything serious, do the work and become competent with it. Just as importantly, do the work of staying competent with it. You have seen some revolvers worked into my dry practice routine and range time in the past couple of weeks. If you’re carrying a revolver you should probably be investing similar time.

†I read this quote in the March 2019 edition of the Rangemaster Newsletter [opens to .pdf]. I was unable to find this quote directly from Mr. Werner at his website, TacticalProfessor.com. Not that I doubt the veracity of this statement; I just hate to “quote a quote” secondhand.

25 thoughts on “Small Revolvers are Hard to Shoot”