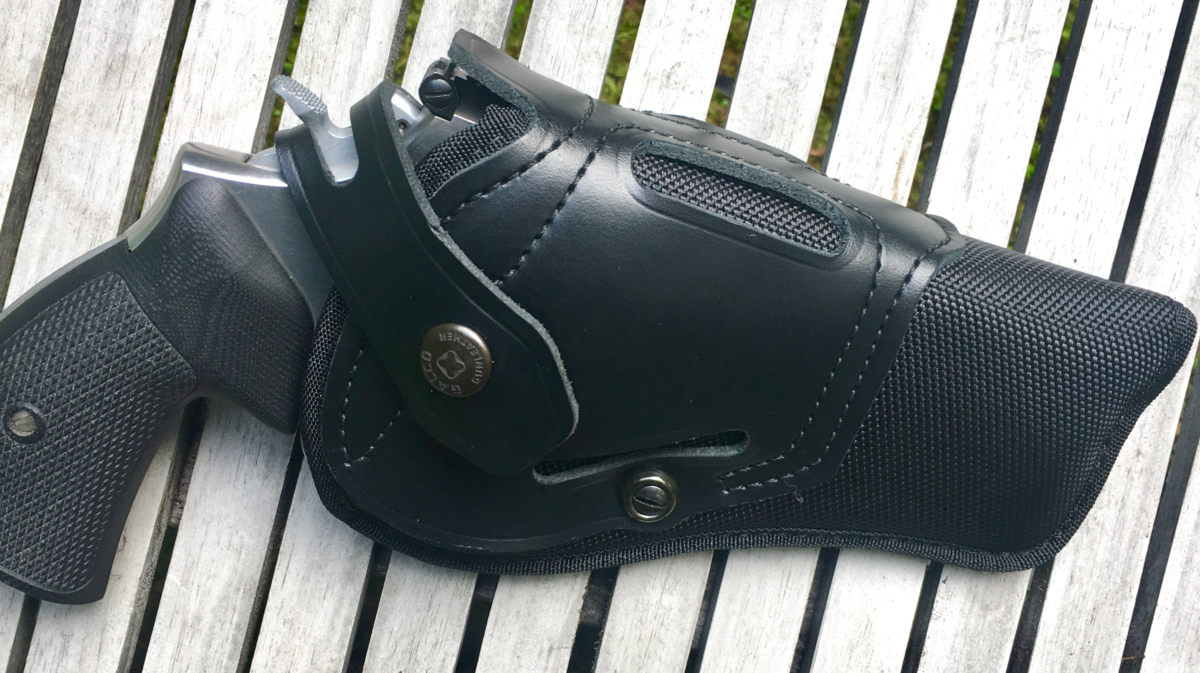 I suppose I’m not like most gun owners. One way in which I likely differ is I like a full complement of support equipment for each gun I own. At a minimum this means one high-quality holster and a couple speedloaders for each of my revolvers. When the Galco Switchback was announced I found myself wondering what utility a universal fit holster would offer me.

Still, I found myself somewhat interested right of the bat because most universal fit holsters differ from the Switchback in some key ways. First, they aren’t from reputable holster manufacturers like Galco. I’m not going to name-call in this article, but we all know who I’m talking about. Secondly, most of them cost about half of the Switchback’s $46 MSRP (and some as little as a quarter of its cost!). Most universal fit holsters are nothing more than cheap nylon; a quick glance at the Switchback and it’s clear it is constructed of decent materials. So, I asked to be provided one for testing.

Since most universal fits really don’t fit anything, the first thing I was curious about was the fit with various revolvers. As soon as it arrived I opened up the safe and began shoving guns it. I’m glad to report that all of these guns fit reasonably well. I think the reason Galco manages a decent fit with such an array of guns can be found in the construction of the holster.

The shell of the Galco Switchback’s main body is constructed of ballistic nylon with reinforced hems. The main body is lined with a slicker packcloth to provide smooth interaction with the firearm. Between the interior and exterior layer is where the difference in this holster lies. The body is reinforced with some fairly dense, closed-cell foam, giving the holster rigidity and body. This helps to keep the holster mouth open while still making more or less form-fitting around guns of differing thicknesses. This heavy lining makes a huge difference. 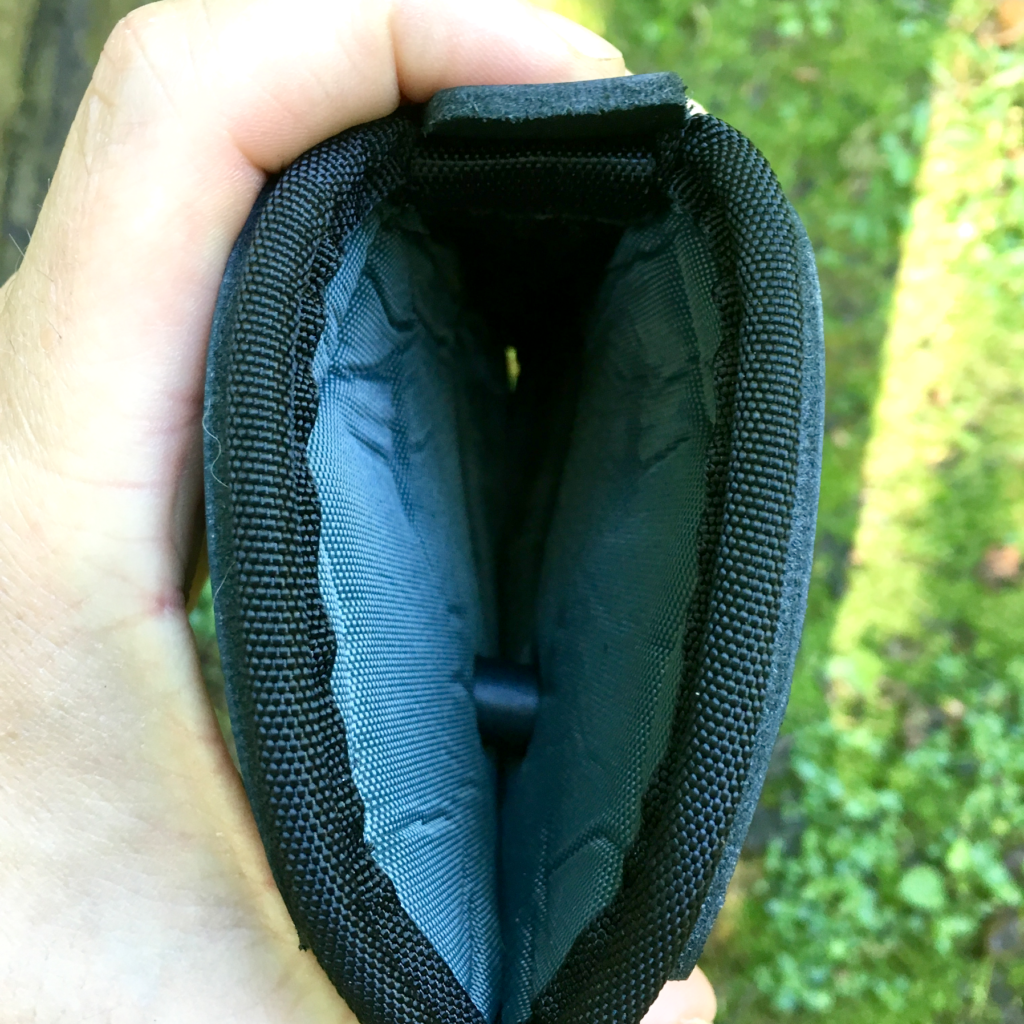 The holster is wrapped with a full-grain leather “exoskeleton”: a leather band around the pocket. This adds to the overall rigidity of the holster. it also provides a mounting point for belt loops and the thumb break. Belt loops occur on both sides of this holster and the safety strap is reversible, making the switch back ambidextrous. 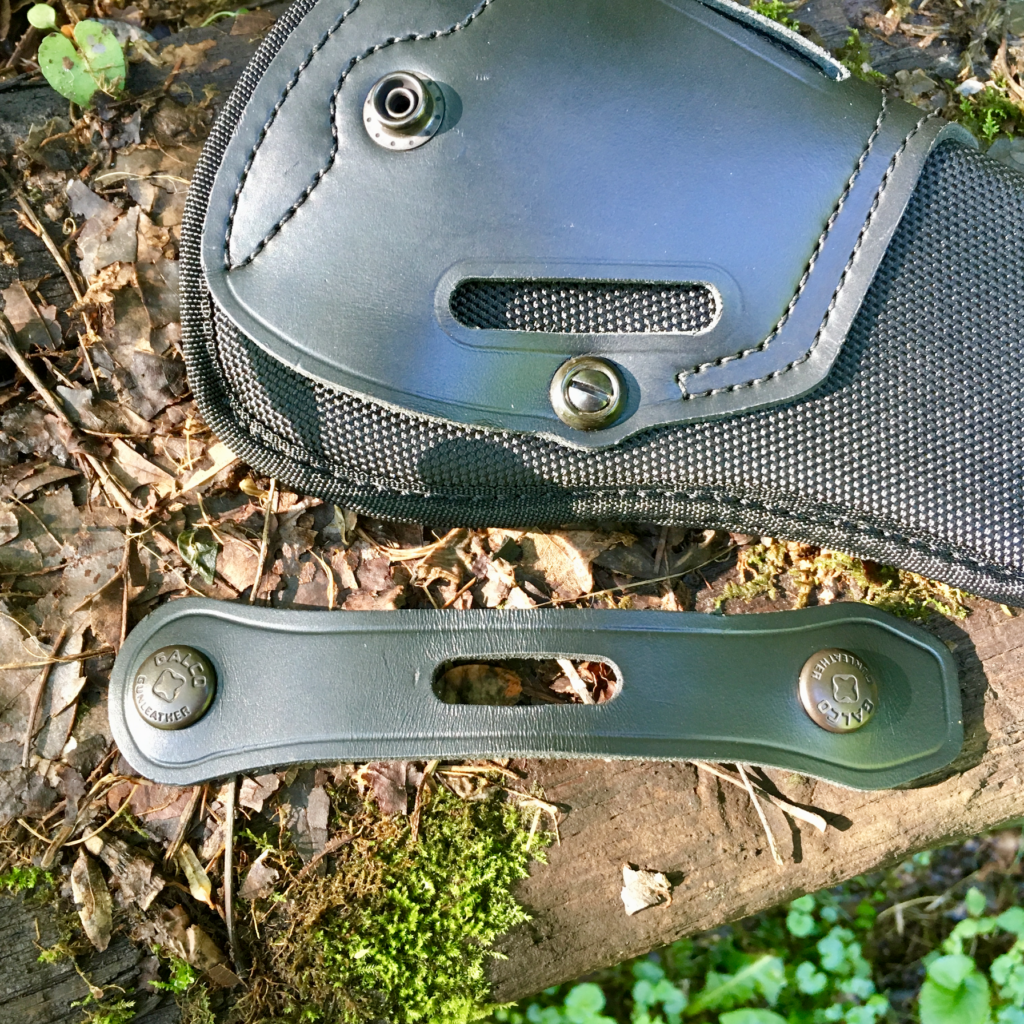 Galco also advertises this as suitable for crossdraw carry, and I’ll part ways with them here. I’m not a big fan of crossdraw, but admit that it might be well-suited for some very limited use-cases, like sitting in a car or driving big rig all day. If you fall into one of those use-cases, I’d recommend a holster dedicated to the purpose rather than a universal-fit holster.

Though the Switchback is a “universal” fit holster, it does fit only a certain envelope of firearms. Generally that seems to be K- and L-Frame sized guns. Galco lists the Switchback as handling the Colt King Cobra (pre-2019) and Python, Ruger GP100 and Security/Service/Speed Six, S&W K- and L-Frames, and several Taurus models (425/627 Tracker and 66). At time of testing I had several guns that fall within this window: a 4″ S&W Model 13, a 4″ S&W 686, and a 4.2″ Ruger GP100.

As advertised, all of these guns fit fairly well. The dense foam padding contoured itself to the frame and cylinder of each to actually provide a bit of passive retention. The reversible safety strap was able to be closed with each revolver, as well. Not content to leave well enough alone, I also tried this with a couple guns that fall outside of its operating envelope. 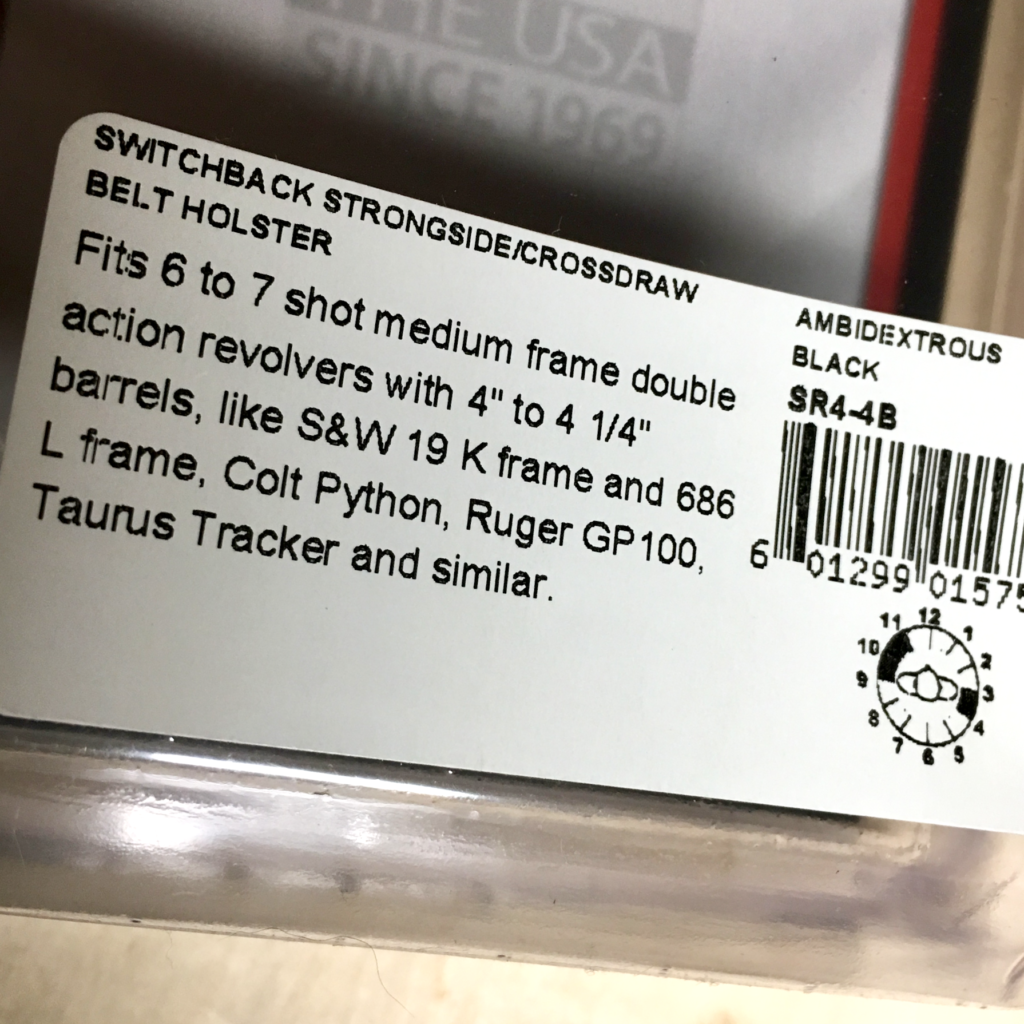 I currently have a S&W 610 (N-frame) on T&E loan so I decided to try it out. The burly N-Frame fit into the pocket of the holster fairly easily. The safety strap would not close, but for my potential use cases for the Galco Switchback (discussed below) that’s fine.

Next I holstered up my King Cobra. I was worried it would disappear into the big pocket, especially with its shorter barrel. Thoughtfully, Galco added a post to this holster, just forward of the trigger guard to keep guns poised at an appropriate height. There was a bit of front-to-back play with the Colt’s revolver but again, for my use case this would be OK.

I belted the Switchback on and messed around with it, both in dry practice and at a range session. It exceeded my expectations generally, but also had a couple tolerable problems.

The only real problem I encountered was the mouth of the holster. It stays open…mostly. I was consistently able to get the barrel into the holster without issue but the wider cylinder usually presented some problems. Usually I could “jiggle” the gun left and right while applying downward pressure and it would find its mark. Occasionally though, I had to reach down with my offhand and give it an assist, especially with bigger guns. This is not OK for a defensive holster, but tolerable for the reasons I would consider using this holster.

There are also a couple of ways to belt this holster and I found one to be definitively better than the other. The first is using the two obvious, provided belt loops. I didn’t like this as I found the holster not cinched tightly enough to my body, and several problems resulted. First, the holster was more likely to drag on the gun when drawing, slowing the draw. Next, holstering a gun was trickier because the holster was less stable. Finally, there was just a general “floppiness” when wearing the Galco Switchback in this fashion. 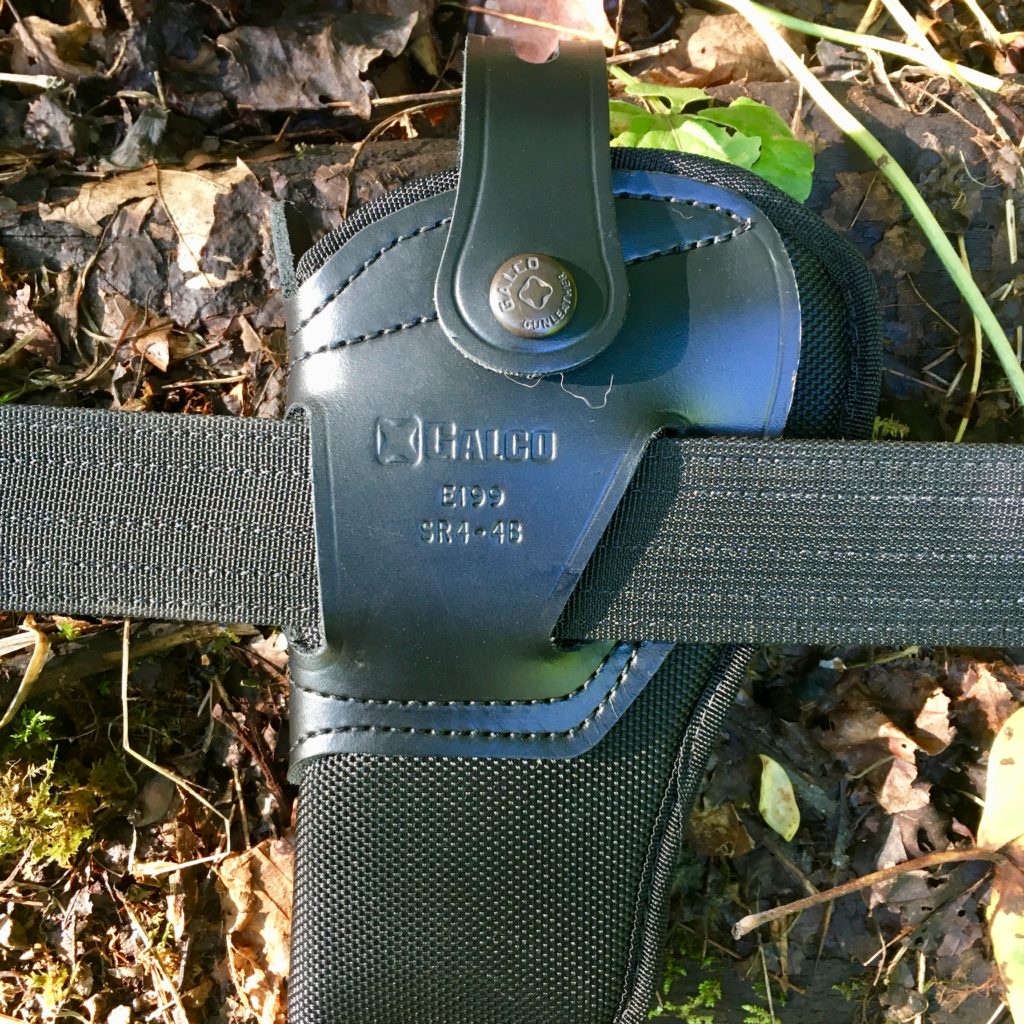 I did find a work-around, though. One can route his or her belt through a much broader swath of the leather “exoskeleton” by using the crossdraw loops. This puts much more leather on the inside of the belt and hugs the gun much more closely to the body, correcting the issues with using the more conventional belt loops. 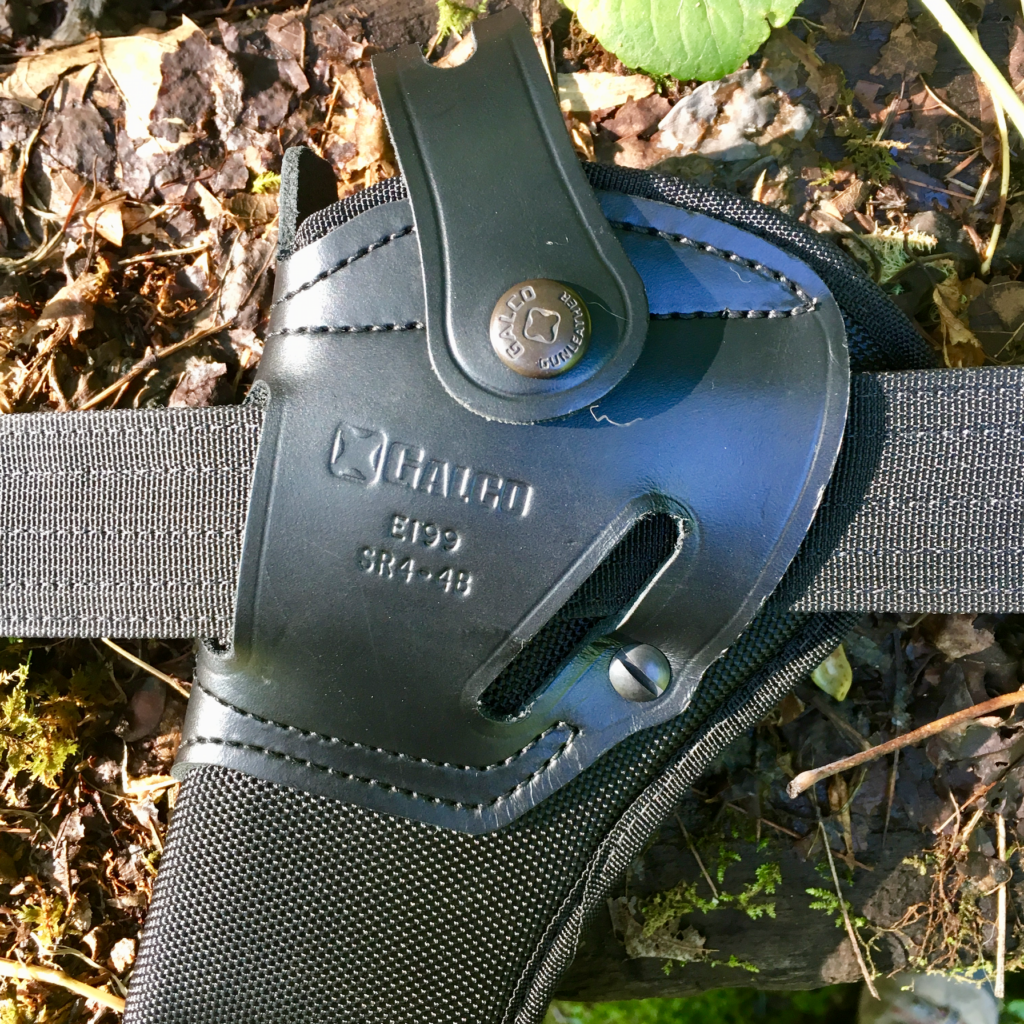 The only downside is this method imparts a mild rearward cant but I didn’t find it intolerable. Belting the Switchback on this fashion actually made it feel like a “real” holster. 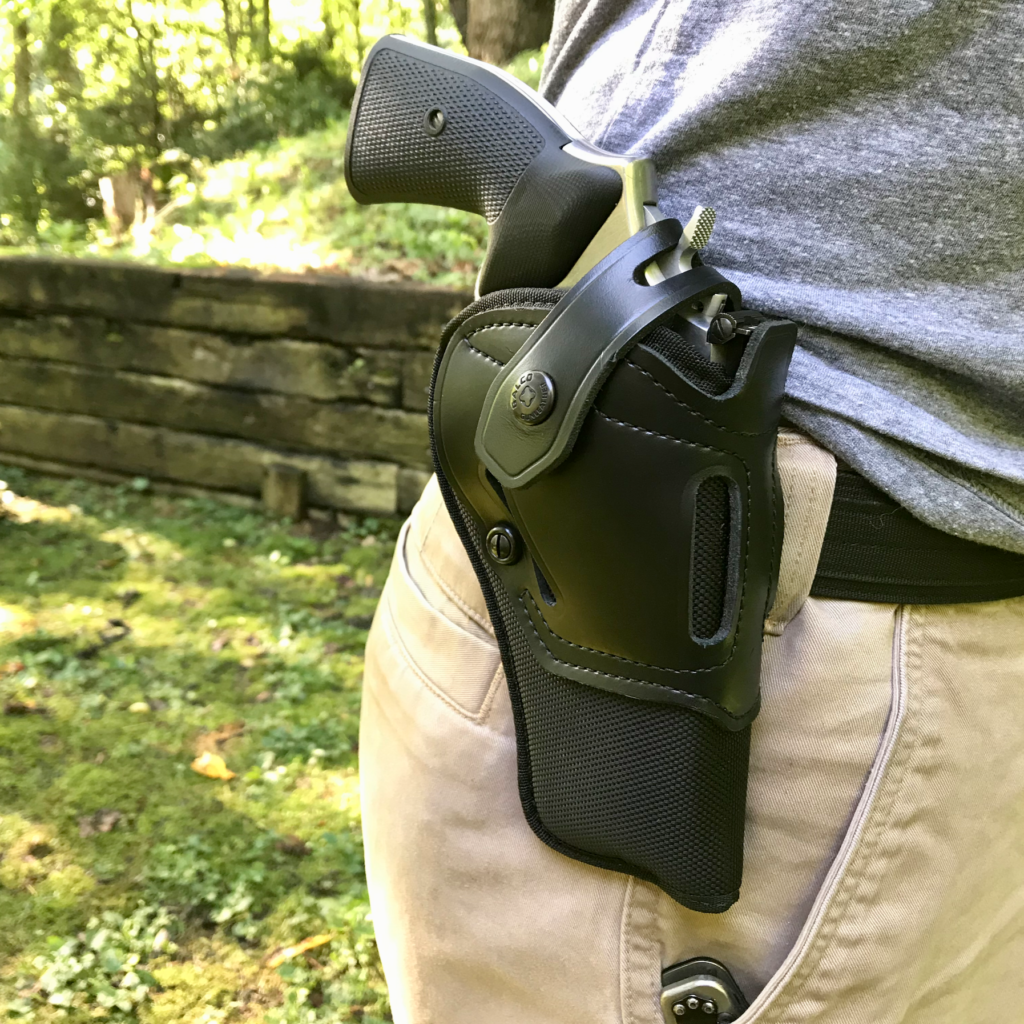 After using the Galco Switchback a bit I did think of a couple reasons I’ll hang onto this holster, and how you might use it in the future. Having a holster like this potentially lets you help out someone else on the range or in a training class. I’ve been to classes and local matches where folks showed up with holsters that were flat-out unsafe. If I’m in a class with someone with inadequate equipment, I now have a loaner that will fit most revolvers. It isn’t a concealed carry rig, or a holster I’d want to hike all day in, but for some flat range work it will get the job done.

If I were an instructor who taught revolver classes, I might have one or two of these handy. The makes and models of revolvers out there are ponderous, and having a bespoke holster for every one of them would be a challenge to say the least. The Galco Switchback could cover most of your bases. The student should be firmly advised not to run out and by the Switchback after class as his or her primary holster, however. 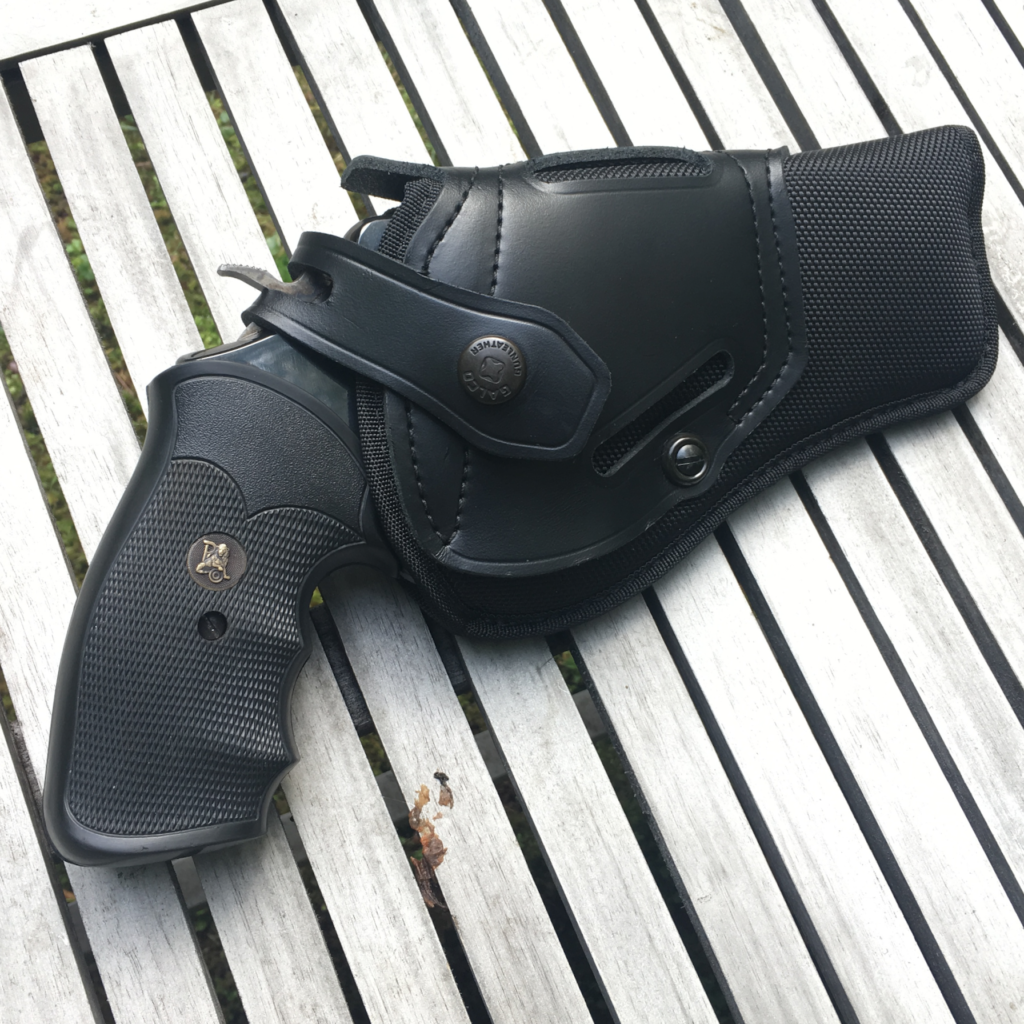 The Switchback will probably also find its way into my range bag for those all-revolver days at the range. Sometimes I forget a holster, and it’s possible a holster will get damaged or even lost. In these unlikely events I can at least make the gun work with a safely functioning holster on the range. 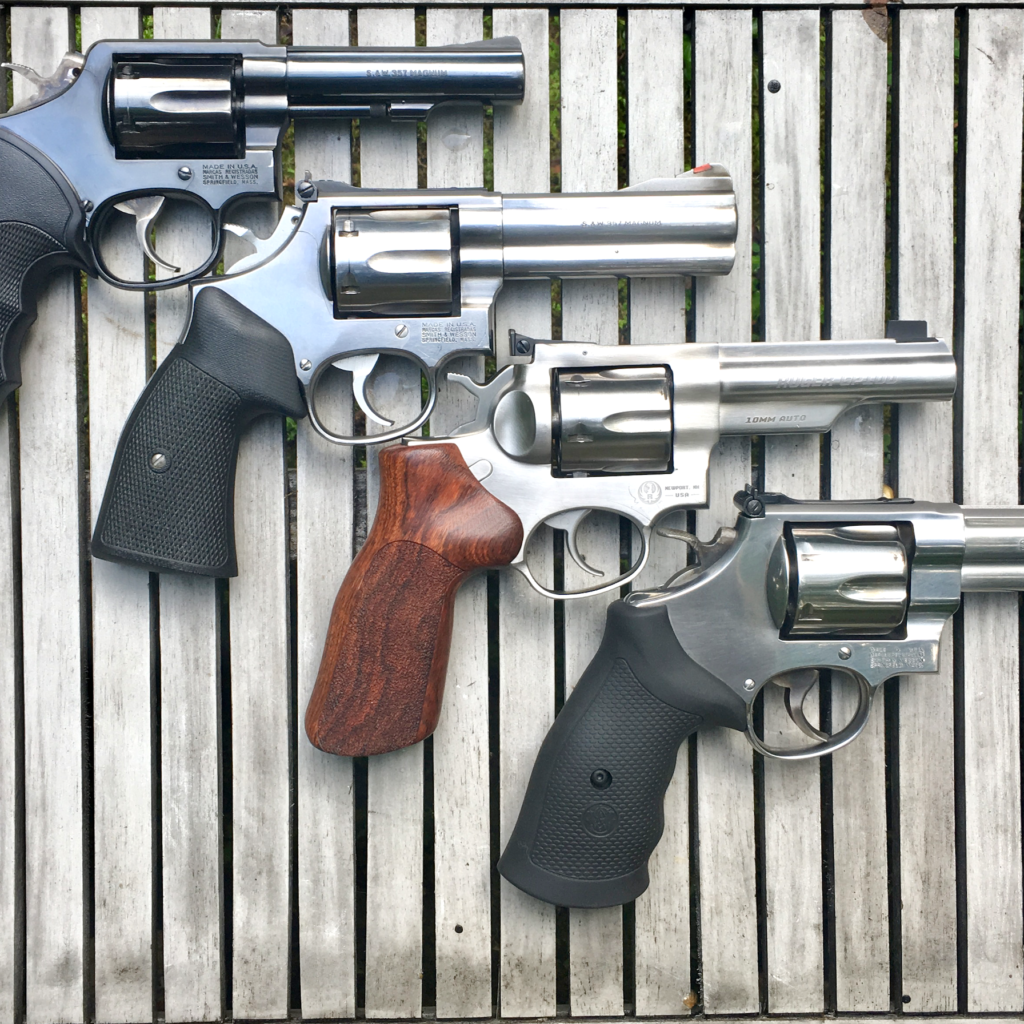 Finally, if you’re that guy with a safe full of range toys that don’t all have a fitting holster, the Galco Switchback might be just the ticket. I agree that it probably doesn’t make sense to buy a holster for a gun whose only action is a day or two a the range per year.

This isn’t a concealment rig. It’s not a heavy-duty, outdoorsman’s holster, and it’s not a duty holster. And it sure as s**t isn’t an open-carry holster! If you are carrying a handgun for any serious purpose – self defense in public, in defense of home and hearth, or for predator defense – buy a holster for your specific firearm. As I mentioned though, this is a fine range holster for casual sessions, or as a backup holster for classes.

This isn’t the first holster anyone should buy. In my estimation, this is the holster for the the person that wants to be ready to help someone else out at the range, the person with a ton of guns, or the instructor encountering a ton of guns. If you fall into one of those categories, though, I’d check this holster out. It comes in two versions: one for 4″ guns and one for 6″ guns. At just $46 the Galco Switchback isn’t a bad rig to have in your bag of tricks.

Did you Get Something of Value From This Article? Please Support RevolverGuy on Patreon!