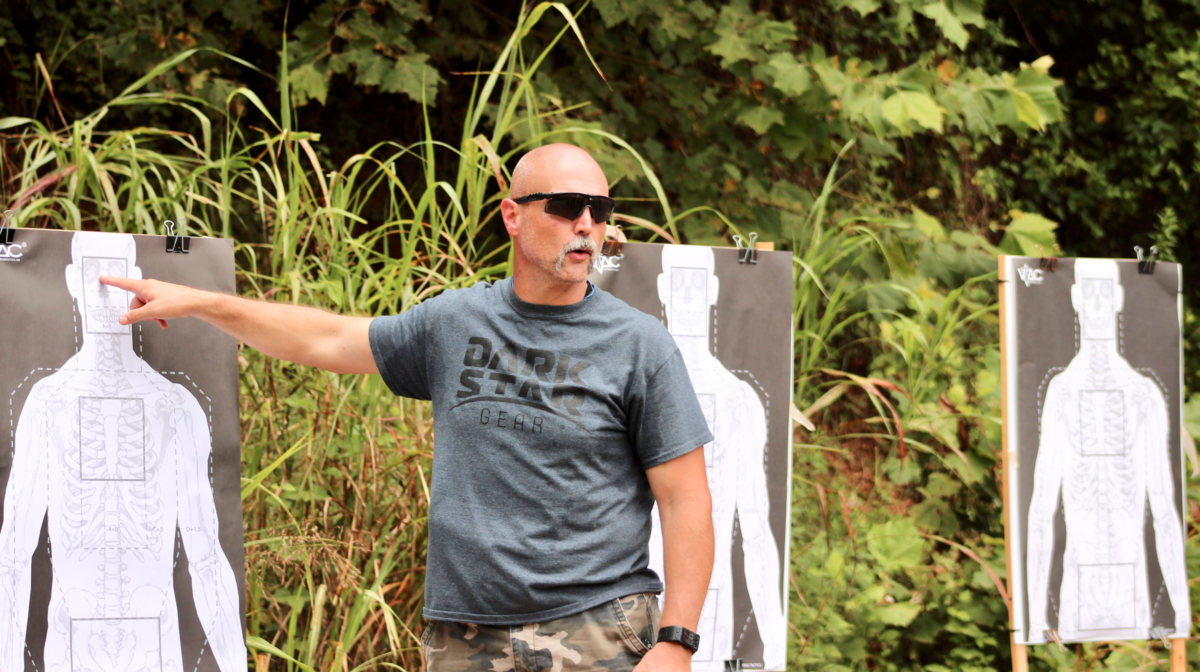 Early this year I wrote that my goal was to attend at least two professional training sessions by year’s end. After attending Competition Handgun back in May, I am happy to report that I recently completed my two-course goal with Chuck Haggard’s Practical Revolvers. Though this class was only a day long (and was cut short by rain) I was thoroughly impressed.  I also have a request for you guys, so please read all the way to the end.

Full Disclosure: I paid full price for attendance to this course. I was not asked to write a review, I was not compensated in any way, and nothing in this article was influenced by Mr. Haggard, FPF Training, or anyone else. . . except possibly my girlfriend, who also attended the class at full price.

Practical Revolvers was held at FPF Training Center in Culpeper, VA. I was immediately impressed upon arriving at the range. Though we arrived bright and early alongside the instructor, I was very happy to see that the range was already set up and waiting for us. There were tents for shade, tables for loading and unloading, and targets were already posted. The range itself was well-manicured and, for this course, accommodated shooting back to about 20 yards.

Chuck began the class with an introduction and discussion of the role of revolvers, both generally and in his own life as a career LEO. What became immediately clear is that Chuck Haggard has a very deep understanding of revolvers. After an introductory discussion shooters gunned up and got on the line in two relays. The first drill fired was a qualification for retired LAPD officers. This relatively easy drill was a good initial assessment of the course makeup. Following this drill the day fell into a routine of shoot a drill, conduct a quick class on the line, and shoot another drill.

Chuck was clear that this was not a “go-fast” class. A great deal of attention was paid to trigger management and effective manipulation of the wheelgun. Since the course was only a day in length, our working lunch was taken in the shade by the range while Chuck discussed terminal ballistics, tactical anatomy, speedloaders, and various carry methodologies.

The afternoon session picked up the pace, and the drills became somewhat more challenging. Most shooting was on paper, but we did move the line back as far as the 20-yard line. Unfortunately the class was cut short by weather when a huge storm rolled in around 2. Concerned about lightning we retired to the classroom. Chuck had also brought along some Clear Ballistic Gel and had planned some demonstrations with common carry loads. I was disappointed to lose range time and additional instruction, but there wasn’t anything that could have been done and I appreciated the respect for students’ well-being.

I learned several things from this class. First and most importantly is how easy it is to do the ball-and-dummy drill with a revolver. How I hadn’t thought of this previously is beyond me, but the idea is genius (Chuck credits it to Claude Werner). The procedure is simple, and far simpler than conducting the same drill with a semi-auto handgun. First, load the revolver to capacity. Next, fire a shot. Open the cylinder and spin it. Arrest the cylinder’s spinning, close it without looking, and readdress the target. You will get a fairly random mix of “clicks” and “bangs.” Occasionally you will get several “clicks” before the hammer falls on a live round, and occasionally you will get several live rounds in a row. This is one thing that revolvers clearly do better than semi-autos: permit the user to do effective ball-and-dummy during a solo range session. 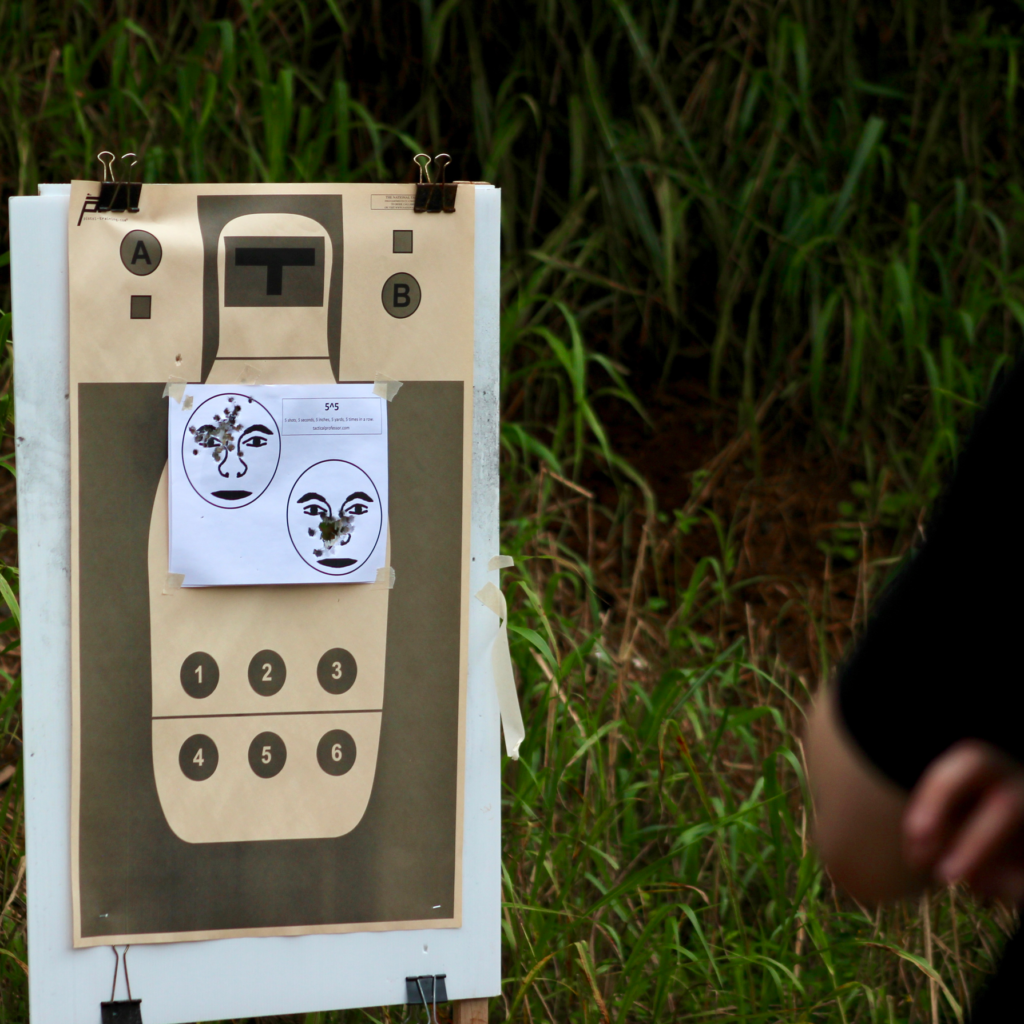 Another big takeaway for me personally was that revolver shooters should be prepared to reload their wheelguns from loose rounds. Speedloaders – even good ones – can fail and dump rounds in your pocket or pouch. Chuck demonstrated the preferred technique for doing so: cradle the revolver with the left hand, ejector rod between the index and middle fingers. Put the loose rounds in the “tray” created by the palm of your hand, and load them one or two at a time with the right hand. This is a technique I admit that I have been bad about practicing, but one that revolver shooters should know.

There were numerous other pearls of wisdom dispensed throughout the course. My favorite, on ammo selection: “it all works OK if you can shoot. None of it works very well if you can’t shoot.” Never have truer words been spoken. As gun guys, it’s easy to get wrapped around the axle about how this or that bullet expanded but this is an excellent reminder that a solid hit with an FMJ is better than a miss or marginal hit with the latest wonder-slug. Chuck also passed on a really cool technique for clearing brass stuck under the extractor star, but I’ll save that for an upcoming article I have planned on the topic.

As a fairly experienced shooter I took certain things from this class, but I was also extremely interested to get the perspective of my girlfriend. Her very first experience shooting a gun was with me, and wasn’t that long ago. Shooting is not necessarily her “thing” but she was open-minded enough to attend the class. After the course we found a burger joint and hunkered down with some food and a beer to discuss her takeaways.

First, she was very impressed with the strong emphasis on safety. Unsure of what to expect, she was relieved that safety was paid such careful attention. She appreciated this for her own safety, and because of the clear set of expectations around her own actions. Though she had some lingering nervousness about committing a safety violation, this quickly subsided due to the close attention of instructors who guided her if she was unsure, and explained the expectations of each drill in detail. By the middle of the afternoon she had forgotten her nerves, and was even looking forward to our turn to get back up on the line and shoot.

Next, like me, she found the instruction to be professional and beyond competent. Several times she told me how much the advice from Chuck and Tim (from FPF Training) helped her. I was glad to hear this, and even happier to see her targets reflect it. The most valuable drill for her was ball-and-dummy. She found this extremely helpful for improving her trigger management and overcoming anticipation. Overall she found the entire day was a educational and enjoyable.

I can’t overstate how grateful I am that this was such a positive experience for her. A negative experience could have completely turned her off to my hobby, but Practical Revolvers made her far more competent. More importantly, it also made her far more confident, and she’s excited for our next range day. I appreciate that more than words can say.

For this course I packed the 10mm GP100. I packed it in the DeSantis Speed Scabbard, a holster I have grown exceptionally fond of. Moon clips were courtesy of TK Custom, as were my moon clip loading and unloading tools. My ammunition was Remington/UMC 180-grain FMJ. I equipped my girlfriend with my 686, two S.L. Variant speedloaders, and two holders from Jox Loader Pouches. She fired Winchester’s .38 Special  130-grain FMJ. 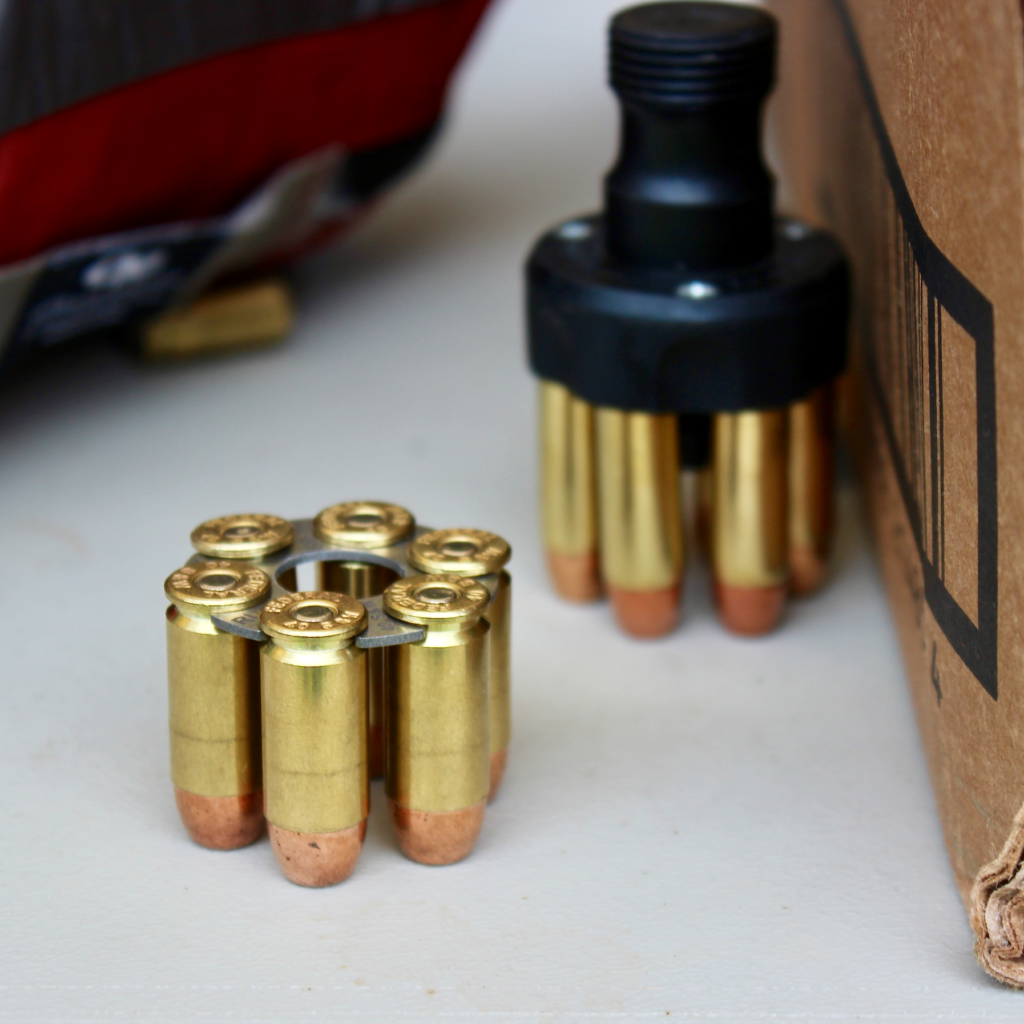 Another really cool aspect of Practical Revolvers was being able to ogle some of the neat revolvers being shot. Students went around the horn introducing themselves and talking about the guns they’d be shooting. Hardware ranged in caliber from .327 Federal Magnum to .45 ACP. Most of the guns used were S&W models ranging from J-Frames to a 6-inch Model 29. Ruger was well-represented as well, with a several LCRs and a couple GP100s.

I was proud to find myself among the ranks of what Chuck called the “handgun hipsters.” I and my 10mm were sandwiched between two other oddballs: Chris Baker was shooting a Ruger LCR in .327 Magnum and Curtis was shooting a S&W Model 58 in .41 Magnum. Though we were promised a “show and tell” at the end of the day, the weather prevented this part of the class from happening. I was hoping for some good photos of some cool wheelguns. Maybe next time!

One of the most touching parts of this course was getting to hang out with some fellow RevolverGuys. Two regular RevolverGuy readers were there, as was my buddy from Lucky Gunner Lounge, Chris Baker. The first RevolverGuy I ran into was Jim. When I introduced myself he asked, “are you Justin from RevolverGuy?” Since Jim and I were on the same relay we had quite a bit of time to chat between strings of fire. Though Jim brought a 3″ GP100, he did most of his shooting with the gun he felt he needed the most work on: a .38 Special LCR. Judging by his targets he didn’t need much work! Jim also humbled me by bringing a breakfront holster to the course to give to me. Some pictures of the holster will be on these pages soon, gracing an article written by Mike Wood. Many thanks, Jim!

The next RevolverGuy I met was Curtis. I approached Curtis because of his choice of revolver, the S&W Model 58 in .41 Magnum. Curtis’ choice of armament for the course was guided by his intent to use his revolver in the great outdoors. I regret that I didn’t get much time to talk to him but we have been in touch since, and might be shooting together sometime soon.

One thing that was especially interesting is that both Jim and Curtis told me they learned of the course thanks to my Revolver Training Roundup article back in January. If so, I was extremely proud when Mike remarked that I was at least partially responsible for a full third of the class’ attendance! There is little more rewarding that being able to help people connect with training, and getting to spend some time with them in person!

The Bottom Line and My Request

I’ve used the word “impressed” many times in this article, and if there is one word to sum up my feelings on this course, that’s it. Practical Revolvers is an excellent course for the rank beginner and the seasoned wheelgunner alike. I guarantee that YOU, regardless of your level of skill and training, have something to learn from Chuck, and I have a lot more to learn from him.

I mentioned that I’d love to see more revolver courses and specifically a two-day course in the future. The response: if the interest is there, let me know and we’ll make it happen. My ask for you guys is this: if you think you’d attend a course sometime next year, please let me know. Get at me on the contact page, or feel free to contact Chuck directly and let him know. Let’s make this happen!