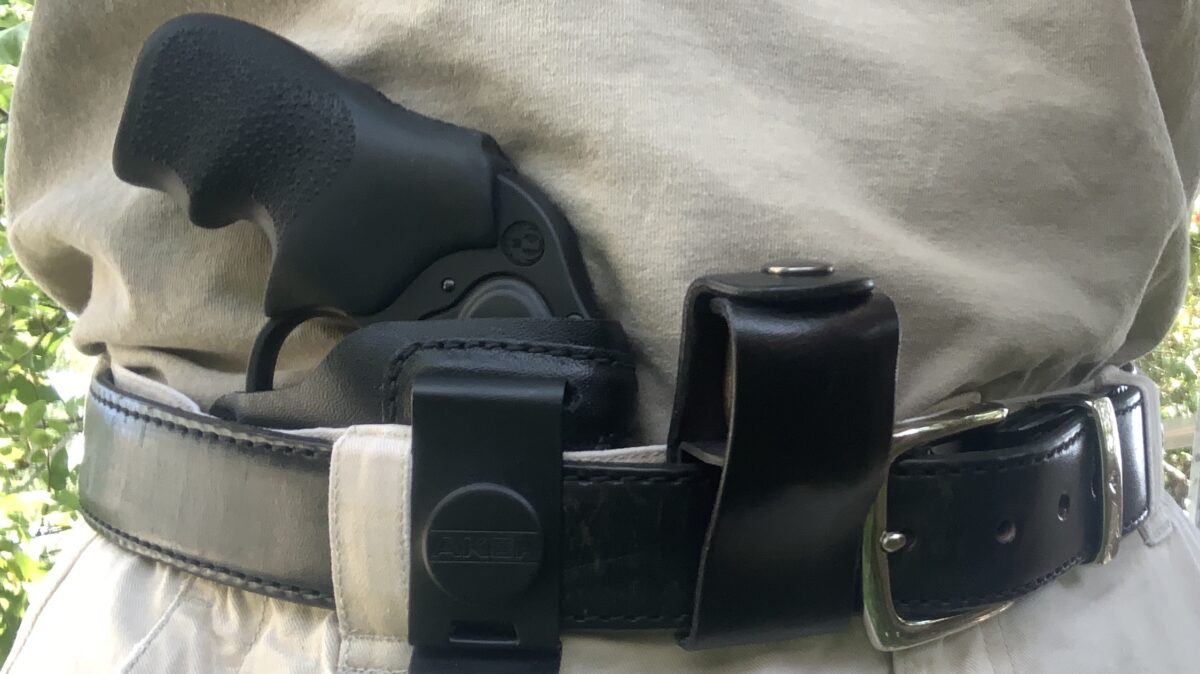 The 9mm Ruger LCR made quite a favorable impression on me when I reviewed it here in these pages more than two years ago. It had a very good trigger, the sights were well-regulated, and it packed a powerful punch.  When it was loaded with ammo that featured lighter projectiles and/or a good crimp, it was extremely reliable, and its light weight and snag-free design made it easy to carry and draw from concealment.

There was one problem that I didn’t solve to my satisfaction though, and that was how to carry spare ammunition for it. The moon clips which made the whole package work are . . . challenging, shall we say, to work with.  They’re delicate enough that you can’t just throw them in a pocket like an inline strip loader or a round-body speedloader, because it doesn’t take much to bend them into useless junk that will prevent your rotator from rotating. They also lack the oversized bodies or knobs that make their speedloader brethren easier to draw and manipulate. 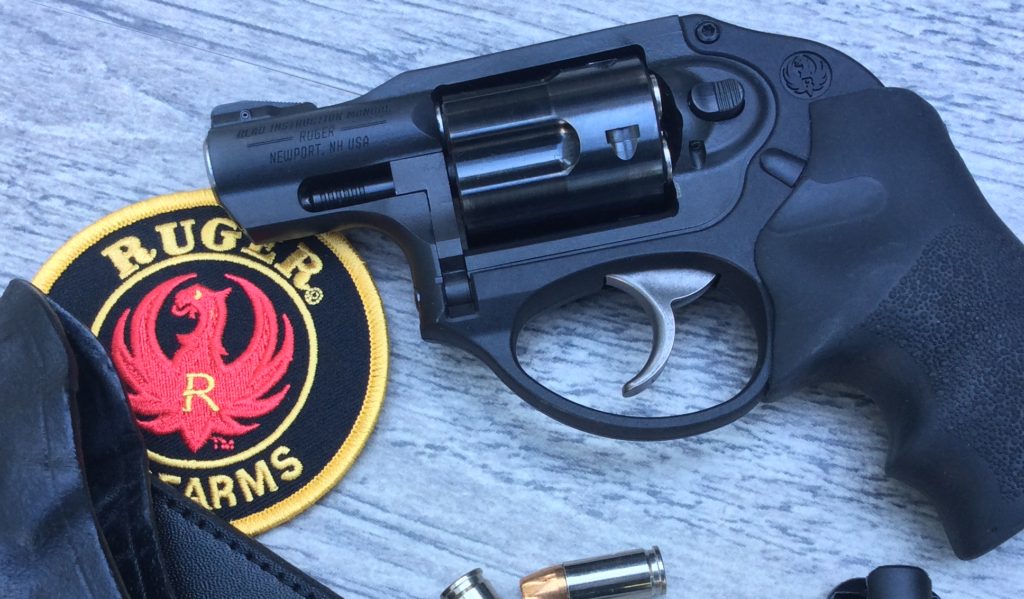 So, a special kind of carrier is necessary for these special widgets, and I hadn’t found the right solution yet when I went to press with the article. The gun made it worth the effort to do some looking, but the search got postponed in favor of other deadlines, other projects, and it became one of those unfinished “To Do” items on my ever-growing list of things that I’d like to cross off, someday.

My first shot at a moon clip carrier for the LCR was a plastic clamshell that was designed by the great Bill Rogers. It carried the clip in “split six” style, straddling the top edge of the belt, held in place by the plastic jaws.  The carrier had the benefits of being inexpensive, offering a very low profile, and providing some protection for the moon clip itself, but I honestly struggled to get the clip out of the carrier efficiently. 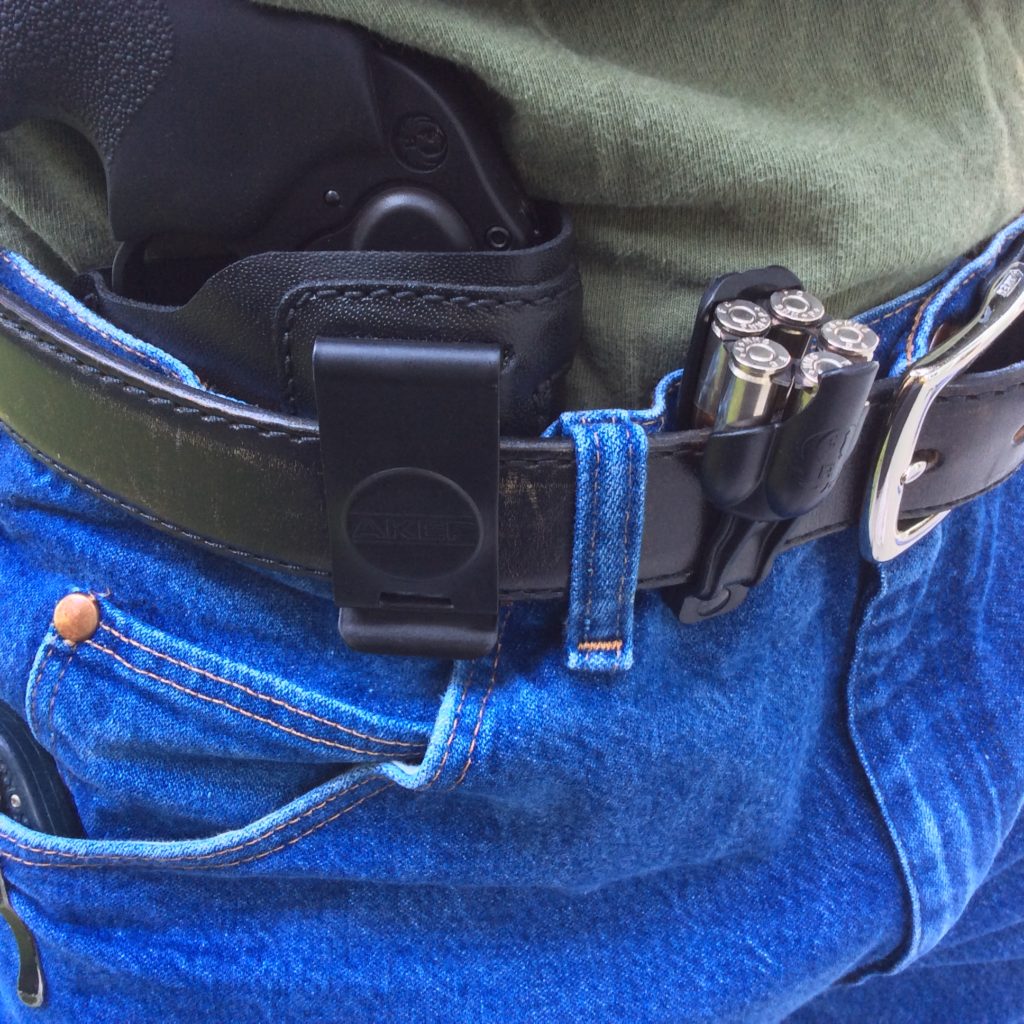 In practice, you were supposed to lever the jaws open by pushing the outer jaw away from the body with your index fingertip, while the thumb and middle finger grasped the clip at its sides. Once the jaws were opened enough, you’d just withdraw the clip. Simple, right? 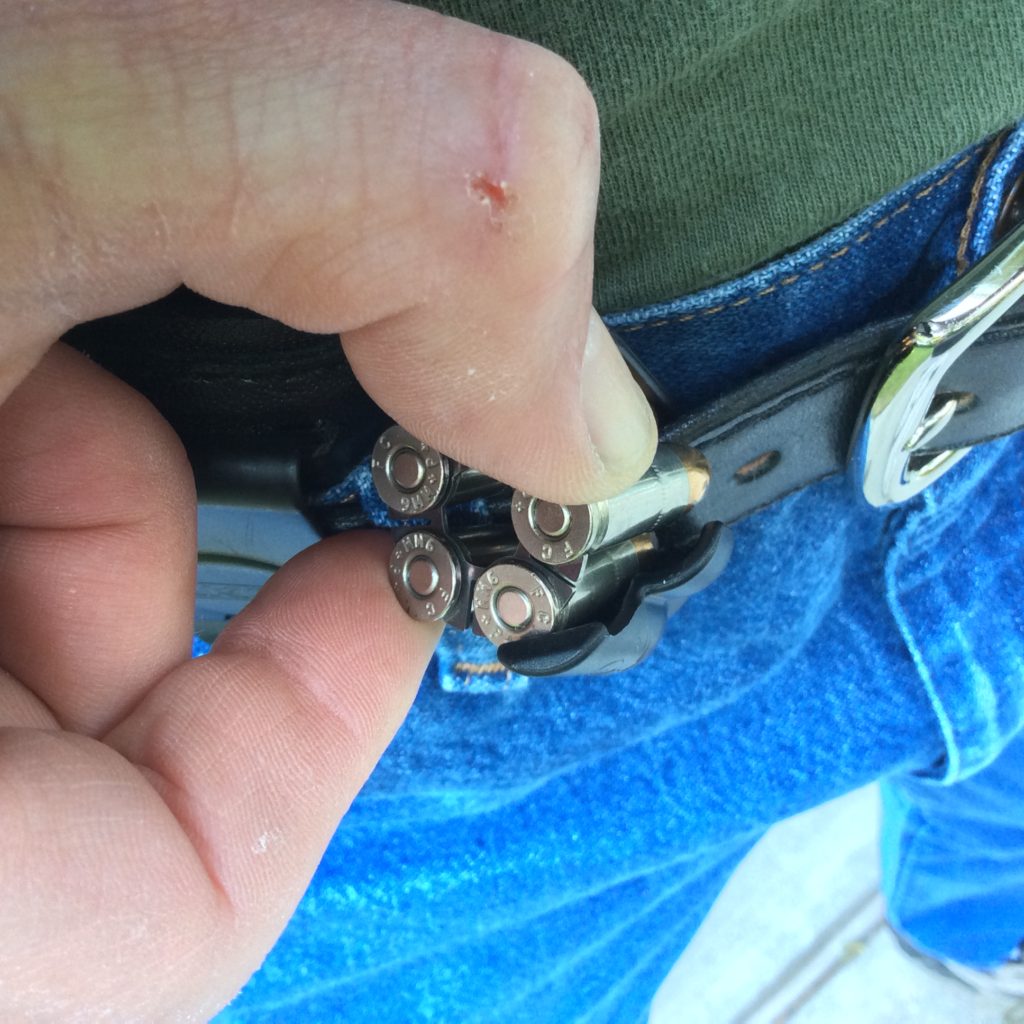 Well, it is simple, but I found the jaw tension was strong enough that it was difficult to get the clip clear of the carrier before the jaws would close again and trap or drag on the clip. For every clean draw I made from the carrier, I had many more where they were fouled. Additionally, if I did things in a hurry, it was easy for me to get out of sequence, and start pulling upwards on the clip before I levered the jaws open, which would trap the clip underneath the retaining hooks on the jaws, and mess up the whole effort. This error also risked bending the clip.

With more practice I might have ironed out the kinks, but it wasn’t an easy design to work with from the start, and the problems I encountered resulted in me bending at least one of the thin factory clips while I struggled to get it out of the carrier.

It had been suggested that I might have good luck carrying some loaded clips in an old pill bottle, and while I gave the idea a try, it wasn’t the solution I was looking for.

The clips rode well in the bottle, particularly after I added a few cardboard spacers at the bottom to fill some space and eliminate rattling, but the bottle took up more pocket space than I wanted to give up, and it also printed badly. Plus, the clips were really only useful for an administrative reload, since it took so long to fish them out for loading. I would have been better off carrying a .38 and loading from a Speed Strip, carried in my coin pocket.

Now, I’m not entirely convinced that reloading a snub under duress is a likely possibility—I’ve been unable to locate a single example of it happening “in the wild”–but it does make me feel better to have the capability. Therefore, if the 9mm LCR was ever going to get carried for defense, I was going to need to find another option for carrying spare ammo.

As a result, when a RevolverGuy reader mentioned Jeffrey Custom Leather in the comments to one of our articles, and said they had a moon clip carrier, I was primed to check them out right away. I’d not heard of the outfit, but was curious to know what they had to offer.

Unlike the injection-molded Rogers product, the Jeffrey Custom Leather Moon Pocket was (no surprise!) mostly constructed of leather. Instead of levering a pair of jaws apart, the clip was accessed by unsnapping a leather flap, and pulling the clip off the pouch’s integral post. So easy, an AutoloaderGuy could do it. Ha!

The post assembly in the Moon Pocket is a neat piece of work. A right-angle piece of polymer provides the base, and a dummy 9mm cartridge is mounted nose-up in the center of it. The moon clip slides neatly into place over the dummy cartridge, which holds the clip securely in place, without any slop, yet provides for a no-drag draw.

The base and clip ride above your belt when the pouch is worn, and while the Moon Pocket doesn’t allow the clip to split the belt evenly, as on the Rogers carrier, there’s still a little bit of overlap with the top edge of the belt that makes the Moon Pocket ride closer to the body than you’d find in a true, outside-the-waistband (OWB) pouch. This definitely helps to reduce printing under a cover garment.

One feature that I particularly appreciated about the Moon Pocket is that the sides of the pouch are open, to facilitate getting a good grip on the clip before you draw it. This is reminiscent of some of the “split six”-style speedloader pouches, too.

As displayed in the Jeffrey catalog, the leather wrap which encircles the base and clip requires an outboard push to pop the snap on the pouch’s flap. This would most likely be done with the thumb, and once the flap was free to open, you would reposition the hand to grab the clip.

That was OK, but I thought the Moon Pocket might be more efficient if the snap was released by an inboard push, instead. In this manner, you could grasp the clip between thumb and middle finger through the open sides of the pouch, then use your index fingertip to pull the snap open. As soon as the flap was free, you could simply draw the clip up and out of the pouch. 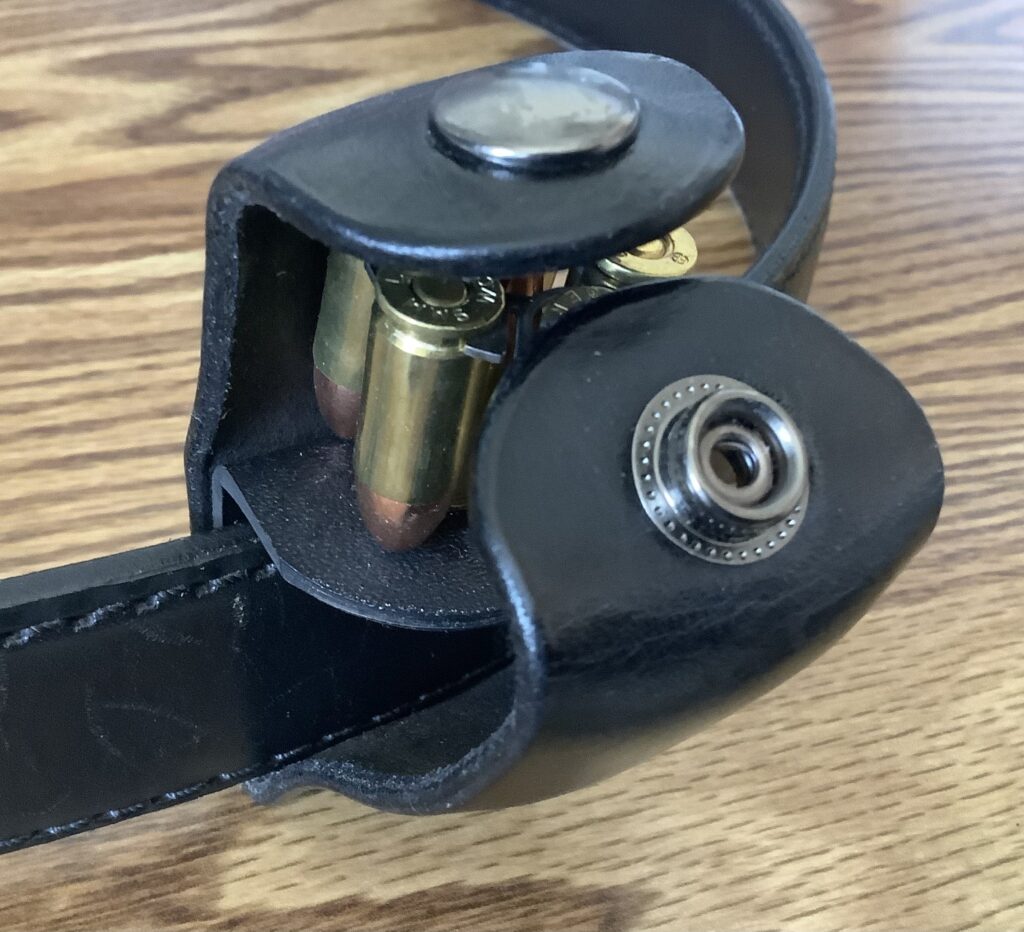 With this in mind, I drew up a sketch of the concept and sent it off to proprietor D. “Jeff” Jeffrey, who readily agreed to make a custom version of his Moon Pocket for me, with my changes. Less than four weeks after I put my check in the mail, my new, custom moon clip pouch had arrived in the mail.

I’ve been carrying the customized Moon Pocket for a few weeks now, and I’m much happier with this solution than any of the others I’ve tried. Jeff built the pouch exactly as I’d requested, with a snap that released inboard, instead of outboard, and I’ve found it both efficient and secure to get the clip out of the carrier with this method.  Jeff allowed just enough leather for my finger to get a purchase on the flap, without leaving an excess of material that would hinder concealment, and it pops open nicely.

The carrier rides comfortably at 1 O’Clock, ahead of the gun carried AIWB at 2 O’Clock, but it does lean outboard a bit because there’s no body pressure on the back of the carrier to keep things taut  (remember, in AIWB carry, the belt is pulled away from the body between the belt buckle and the leading edge of the holster, due to the cylinder’s bulk).  Moving the carrier aft of the gun, closer to the point of the hip, pulls it tighter against the body, and  provides much better stability and concealment. I normally prefer to carry spare revolver ammunition up front, because it makes the reload a little speedier and improves off-hand access,  but the case just lays flatter when carried behind the gun (far enough that it won’t interfere with the draw), and I found this was a better way to do it.

The leather flap seems to protect the moon clip well, and the clip certainly slides off the central, dummy round, post very easily.  The pouch was nicely shaped by Jeff for a streamlined and trim appearance, and easy carry on the belt.

The workmanship is very good on my carrier, and I think it’s a good value for a custom piece. Jeff charged me the same as he would have for the standard product, and I thought that was great.

I’m really pleased with this carrier, and think it’s an excellent way to carry a moon clip reload for the Metric Ruger. If you’re fond of this 9mm snub like I am, or want a version for another one of your moon clip-fed guns (Model 625? Ruger GP100 in 10mm?) I encourage you to give one of these carriers a try.

Although the “RevolverGuy Version” of the Moon Pocket won’t be visible on the Jeffrey Custom Leather website for a while, due to some tech issues with the site (I feel your pain, brother), Jeff said that he’d be happy to make more pouches in this style for anyone who wanted them. Just make sure to specify that you want this version, instead of the standard one.

While you’re there on the Jeffrey Custom website, take a look around at the other beautiful creations coming from Jeff’s workbench.  You’ll find a variety of handsome gun belts, holsters, pouches and other accessories to suit your needs. Personally, I’m intrigued by his Single Loop Cross Draw for the J-Frame, and think the “Burnt Walnut” antique color that he’s applying to many of his holster designs is very attractive, especially combined with his basketweave pattern.

I’m thankful to the RevolverGuy reader that pointed me towards Jeffrey Custom Leather, and hope that more of you will discover him after seeing this review. Let him know we sent you there, and make sure to let us know about your experience in the comments.