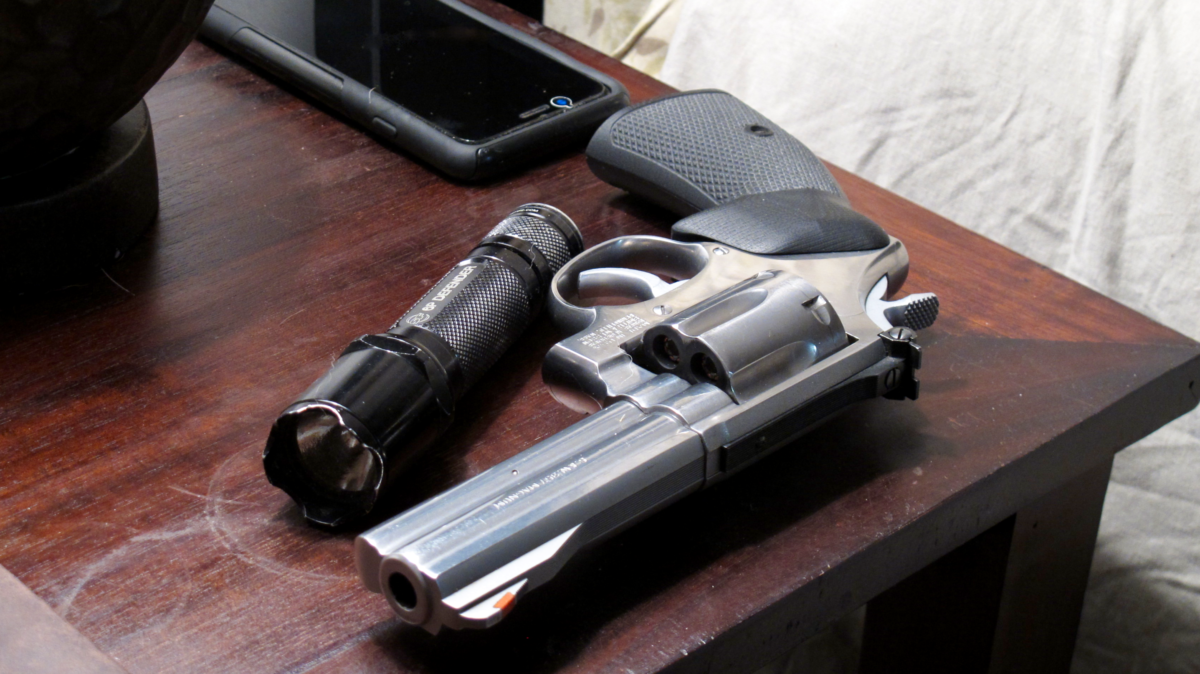 I have been a little down on the concealed carry revolver lately. There are a lot of compromises to be made when selecting a revolver for everyday carry and I won’t rehash them here. There is one role in which the revolver shines, however. The home defense revolver suffers from very few of the problems that plague the everyday carry revolver. This post will take a look at a few of these benefits.

First, let’s define the home defense revolver. This is the revolver that rarely leaves the house except for regularly scheduled range trips. It doesn’t see much time in leather (or Kydex) and generally has a pretty easy life. It spends its evenings within easy reach of the home’s principle defender, and most of its days in the safe or a lock box.

Choosing a home defense revolver is easier (in my opinion) than one intended for concealed carry. Most of the benefits of a home-defense revolver are conveyed via the negation of size constraints. Because you have to neither hide the gun nor lug its weight around, you can defend your home with hardware that would be unmanageably large to tote on a daily basis.

According to Boris the Blade, “heavy is good.” I tend to agree. A heavier gun is easier to shoot. Weight helps to negate the forces of recoil which helps to speed followup shots. It also helps to stabilize the gun at arm’s length. Weight is a curse when the gun is being hauled around, but nothing but a blessing when it is being shot. A full size, double-action revolver will have plenty of recoil-absorbing heft. A 4″ GP100 for instance, weighs in at 40 ounces. I wouldn’t want to carry it, but I’d happily keep one as a home defense revolver.

Because the gun doesn’t have to be concealed, you don’t have to worry about size constraints. This frees you up to consider barrel options that wouldn’t work on a carry gun. Four, 5, or 6-inch barrels would all be right at home on a home defense revolver. It also lets you use any grips your heart desires, including those that would be uncomfortable for carry duty. It’s easy to underestimate this benefit, until you’re carrying a snub that won’t hang onto your little finger.

I read a lot of talk online (still, in 2018!) about how the revolver’s trigger is difficult to master. I think this must be due to one of a couple things. Possibly, since J-Frames are some of the most popular defensive revolvers out there, they (and their horrible triggers) are what most people get acquainted with. Or it could be that they are shooting larger S&W revolvers of modern vintage, which aren’t known for smooth triggers. I suppose it could also be that most revolvers don’t ever see a lot of dry practice and don’t get up into the 5-digit round counts, so their triggers never get buttery smooth. Or, more likely, it’s just that not very many people shoot revolvers these days and are repeating what they’ve been told.

Whatever the reason for this misconception, I almost get a case of the vapors when I read such a statement. A high-quality, double-action revolver trigger is a thing of beauty. The trigger on my 686 is so excellent it’s hardly noticeable. Although it’s over 10 pounds you’d never know it because it is so clean and smooth. Aside from that, I feel that the longer, heavier double-action trigger provides a slight margin-for-error.

Yes, I fully comprehend that safety begins with a straight trigger finger and muzzle discipline. Unfortunately not all shooters are as disciplined as you. The DA trigger requires a more deliberate press to activate. I don’t think this is a substitute for safety, but I don’t think it hurts. Remember my article on revolvers for non-shooters? I’d feel much better about that girl padding around her house with a 10-lb, double-action trigger than a 4-lb single-action.

You’re probably expecting me to cite low capacity here, but I’m not going to (I’ve got a whole article planned about that). Instead, I’d like to talk about another disadvantage that rears its head when the revolver is used to answer the bump in the night. Revolvers are hard to outfit with aftermarket sights and weapon-mounted lights.

I really like the the weapon-mounted light for social purposes where size and weight are not factors. I don’t use one on my carry gun, but I do feel that one on the gun most likely to be used at night wouldn’t be a bad thing. The only problem is…have you ever tried to find a mounting point for a light on a 686? Yeah, same here. And I’m still lookin’! S&W does make a model or two with an integral rail (and I’d love to get my hands on one) but the vast majority of wheelguns have no such provision. This is why a hand-held Surefire is also on my bedside table. I’d prefer not to have to use the hand-held because that means one hand is on the gun and one ain’t. I know how I shoot better, and it’s with both of my sandwich-clamps wrapped around the grips.

Ruger GP100: Ruger’s flagship .357 Magnum revolver would be my top recommendation for a home defense revolver from current production offerings. The GP100 is and always has been an incredibly strong revolver. It is well-supported by the aftermarket, with a wide range of grips, speedloaders, sights, and other accessories. The beefy GP100 can help tame the warmer .357 Magnum offerings, if that’s what you choose to stoke it with, and a GP100 bought today will probably be capable of serving as a home defense gun for your grandchild of the future.

Smith & Wesson K- and L-Frames: I hate to turn into “that guy” but I can only recommend current production S&W revolvers reservedly. I’ve had the opportunity to shoot a few and handle a few more, and I’m thoroughly unimpressed. The triggers are terrible, internal parts have gone from forged to MIM, and the lock… Of course, you can completely disregard what I said above if you’re willing to dip your toe in the used revolver market. The pre-lock S&W revolvers are, generally speaking, exemplary candidates for home defense duty. The medium and medium-large frame revolvers (K and L-Frames, respectively) with barrels from 3- to 6-inches are ideally suited to this role.

And speaking of things I’d stay away from… I would firmly recommend against a small-frame, snubnose revolver. The Airweights and LCRs are fine when you want to carry, but not ideal choices for home defense chores. They don’t have any of the benefits and all of the drawbacks. And while we’re at it, the tend to give off quite a bit more muzzle flash.

You will doubtlessly notice that two things were missing from that list of advantages and disadvantages. The first is capacity. I’m fine with a six-round gun at home, and I think this issue gets a lot more attention than it should. The other thing that is missing is the infamous “reliability.” A good revolver will be reliable, but no more so than a high quality bottom feeder, so I think that’s a false argument.

Bottom line: if all you’ve got is a revolver, don’t worry. You can take care of yourself nicely.

46 thoughts on “In Praise of the Home Defense Revolver”