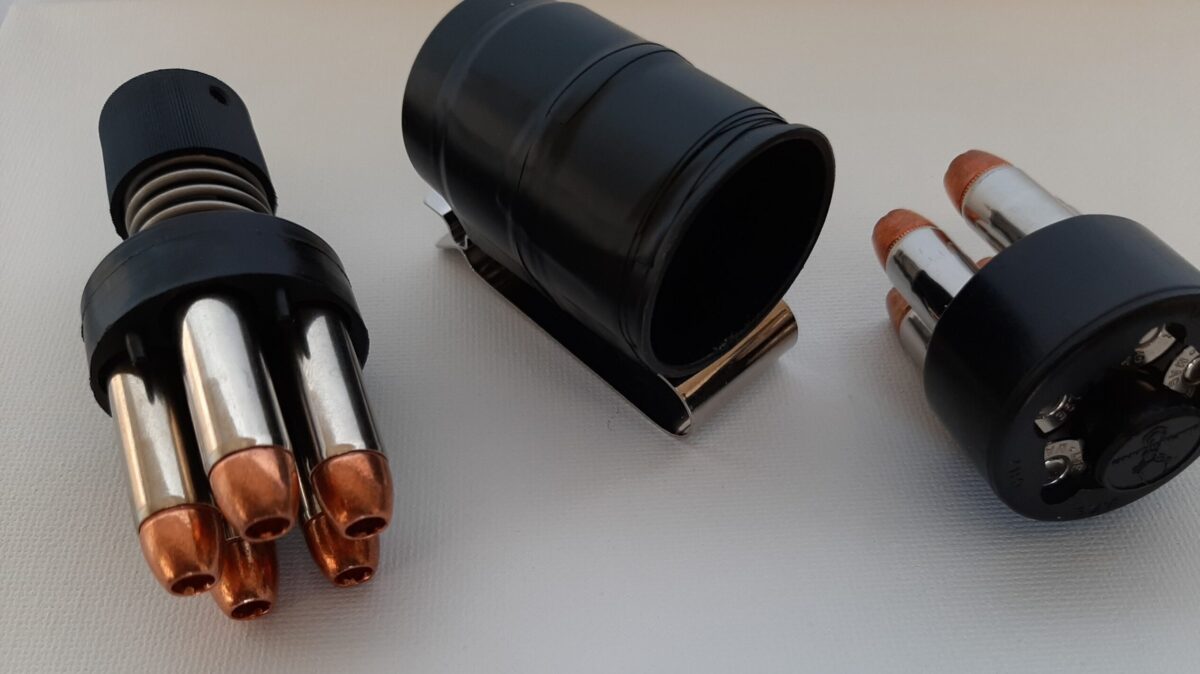 It’s tricky to find adequate gear for a round gun in a flat gun world. With a click of a mouse, you have access to tons of holsters, aftermarket magazines and magazine pouches for all sorts of auto pistols, but finding quality revolver gear doesn’t come easy. Demand dictates supply, and since there are fewer people carrying revolvers, the lack of industry support for the revolver isn’t surprising. That doesn’t make it any less frustrating.

Editor’s Note: While we all like fancy gear, sometimes it’s the simple and creative workarounds that really get the job done. We’re glad to welcome RevolverGuy Kevin McPherson back with his story about a clever solution to a vexing speedloader problem he had. If you missed it before, make sure to go back and read his story on Dwayne Worley Grips.

A common malady we all share is the lack of available speedloaders for any given revolver. Smith & Wesson’s J-Frames are likely the most popular carry revolvers on the market, but there’s only a handful of loaders available for them–maybe a half-dozen or so. Unfortunately, we lack suitable pouches for even this small selection of loaders. Making dedicated pouches to carry speedloaders isn’t high on most manufacturer’s priority lists.

Austria’s JetLoader is the only spring-assisted loader currently available for a J-Frame. It’s an excellent design that works very well with the small revolver.

Unfortunately, there are very few options in a dedicated pouch to carry one, especially for concealment. The pouches that are designed for HKS or Safariland loaders with snapping flaps will not work because of the length of the handle on the JetLoader. (Editor’s note: We successfully modified a prototype pouch from DeSantis when we were working with them on their FLETC 2.0 design, and understood this feature would be incorporated into production. A larger window cut on the flap allowed it to clear the longer JetLoader handle when lifted. You might be able to modify your own pouch in a similar fashion.)

An open top pouch that keeps a loader vertical and accessible is preferable. Jox Loader Pouches are the best game in town, and Nick Jacques from Jox now catalogs an IWB pouch like the one he made for Justin, but as of early-December 2020, Jox has placed their production on hold because of outside vendor issues. We hope they’ll be up and running in the new year, but you’ll have to be patient for now, if you want one of these fine pouches.

The JetLoader doesn’t lend itself to front trouser pocket carry as it’s pretty big when loaded. It’s much easier to carry in a cargo pocket if your britches are so equipped. If they’re not, your JetLoader becomes a brisk weather accessory because you need a vest or jacket with pockets to tote it.

A belt pouch is a better option than just sticking a JetLoader in a pocket. An IWB version will conceal the big loader better than an OWB belt pouch like the Comp-Tac or Wilderness for year-round carry. I have an IWB pouch made for a 5-Star loader by Black Rhino. I use it when carrying a Ruger LCR. It’s specific to the 5-Star loader, and it works pretty well with it. The downside is the loader tends to sink down into the pouch with shorter .38 Special rounds and you have to grasp it by the release knob to retrieve it. I’ve dumped the loader’s payload prematurely by inadvertently turning the knob while yanking the speedloader out by the knob, trying to reload rapidly.

Statistics tell us that most gunfights will be non-reloading events. I’m hesitant to gamble on that (I have this nagging fear that Murphy is waiting for me to carry a 5-shot revolver without a speedloader to spring his ultimate ambush). I needed a way to daily carry that JetLoader if I was going to carry a 640 as a primary. I’ve spent a good amount of the COVID 19 vacation pondering a solution.

Tossing and turning several nights ago, I had one of those lightbulb moments. I trudged to the garage and pulled my hunting survival kit off of a shelf. A plastic 35mm film canister was retrieved and emptied of the wooden matches that were stored there. I suspect that most people reading this are familiar with 35mm film, the canisters it came in, and the myriad of uses the canisters had. They are a warm reminder of my analog youth and I never thought that I would have to explain their purpose to my children.

“What are the chances?” I thought while heading back into the house. I placed the charged JetLoader in the canister and it fit PERFECTLY. The JetLoader has little plastic nubs on its face that protrude between the loaded cartridges. They snugged the loader on the mouth of the canister like it was custom fit for it.

The canister could be turned upside down and the loader stayed in it. I went back to the garage and started rummaging through holsters looking for a suitable belt loop option to affix to the cannister. I found an old suede-out magazine pouch that was designed for inside-the-pants carry. It had a conventional belt clip that was easily removable; a suitable donor for the pouch. As I began to plan my drilled and riveted feat of engineering, a little voice in my head counseled not to overthink this project. I pulled a roll of electrical tape from a drawer and went back inside.

I tore off a few pieces of the electrical tape and affixed the belt clip to the canister. I ran four or five layers to prevent the canister from twisting or pulling off of the clip. Probably overkill, but it ended up pretty secure. A little caution was required to secure it without putting too much pressure on the canister and mashing it.

I geared up with my 640 in a Galco Tuck & Go 2.0 holster, carried in the AIWB position at about 2 o’clock. The homemade pouch was placed in the void created by the front of the Galco holster. The handle of the JetLoader hides well here, as it hugs my mid-section snugly. The long handle also makes it fast and sure to access from there for reloads. It was a little difficult to get the loader fully seated back in the pouch after deploying it. Maybe it’s not the best choice for an all-day shooting class or a competition, but for carrying and using in emergencies, it seemed like it would work. I wore it for a few days with favorable results. The loader stayed put in the pouch, and the pouch stayed put on my belt. I haven’t seen any degradation of the tape job or shifting of the cannister on the clip. So far, so good.

The pouch can also be reversed and worn on the outside of a belt. It obviously won’t hide as well this way and it’s not as secure as when the handle is tucked up to your mid-section. It would definitely work for range carry that way. It’ll also work to keep a JetLoader staged in a vehicle, clipped onto a door storage cubby.

I tried it with other J-Frame loaders, and was pleasantly surprised to find it will adequately carry a Safariland Comp I as well. The loaded rounds snug up on the inside of the cannister and provide enough tension to hold well. It won’t work with an HKS or a 5-Star; they just rest on top of the cannister rim with no tension and easily fall out.

Obviously, this isn’t a high-end piece of kit, built to last a lifetime. But it’s inexpensive and works pretty well with the 2 speedloaders I carry most with a J-Frame Smith. It’s easy to replace (you can easily purchase 35mm film canisters online from a variety of sources, and suitable belt clips are also available from many makers) and certainly worth a try if you haven’t been able to find something that works for your own JetLoader or Comp I.

If you give it a try, make sure to let me know in the comments below how it worked for you!